This page summarizes the sites that are reviewed in the area of the Sharon and the south coast plains – the western side of the central Israel. The region is bounded between Nahal Tanninim in the north, Yarkon River (Tel-Aviv) in the south, Mediterranean Sea (West), and Samaria hills (East).

The following sites were reviewed in BibleWalks.com. On each site below you can:

The Aqueduct brought running water to the old city of Caesarea, along a raised aqueduct. The source of the water was the springs of Shummi, 10KM away. Herod build the aqueduct in the 1st C BC. later, in the 2nd C AD it was expanded by the Romans. Later, 2 more aqueducts were built.

According to one of the Traditions, this site is the tomb of Benjamin, one of the 12 tribes of Israel.

One of the most important port cities in ancient history, the port city is strategically located at major crossroads in the center of the land of Israel.

2 Chronicles 2:16: “And we will cut wood out of Lebanon, as much as thou shalt need: and we will bring it to thee in floats by sea to Joppa; and thou shalt carry it up to Jerusalem”.

Aphek (Afek, Antipatris) in the Sharon

A Greek-Orthodox church, located near the southern entrance to Old Jaffa, and is  known for its tall bell tower. 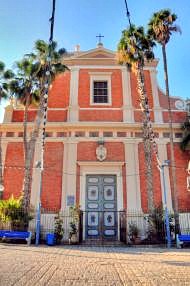 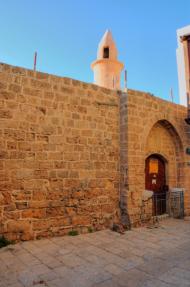 Acts 10 6: “He lodgeth with one Simon a tanner, whose house is by the sea side”

Jisr e-Zarka is an Israeli Arab town located north of Caesarea. A Roman aqueduct passes through the town.

Tel Tanninim (“Crocodiles mound”) is the ruins of  the city of Crocodilopolis, located on the mouth of Tanninim stream. Nearby is a fishermen pier and village.

Remains of an ancient Tel and a small Crusader period tower near Kefar Yonah.

Remains of an ancient multi-period Tel, the largest and important archaeological site along the Nahal Alexander river.