* Tour of the site

Remains of a multi period settlement situated on the top of a high hill, on the north bank of Nahal Qana (Kanah). The ruins are part of the Hezi Sapir memorial park, part of the community of Nirit, in the south east Sharon region.

The ruins of Horvat Zakkur are located on a hill (altitude 135m) overlooking the Nahal Qana stream. The structural remains, belonging to the ruined Arab village, cover 20 dunams on the upper side of the hill. 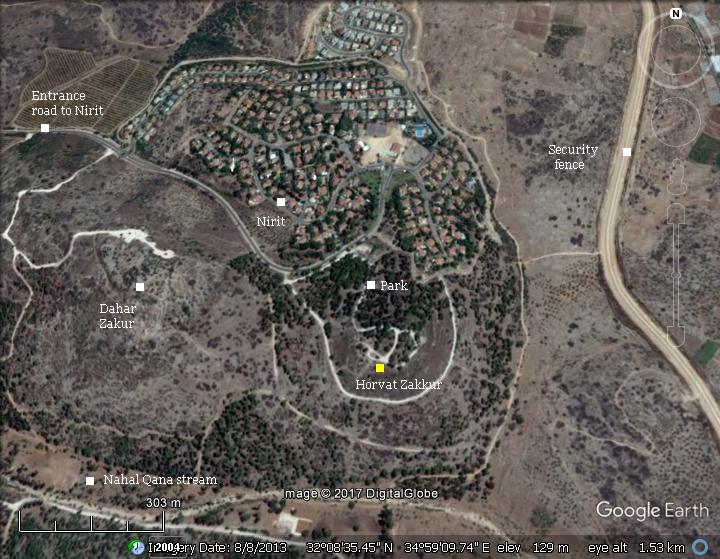 The Iron Age village was within the territory of the western half of the Menasha tribe (Joshua 17:7): “And the coast of Manasseh was from Asher to Michmethah, that lieth before Shechem; and the border went along on the right hand unto the inhabitants of Entappuah”.

Most of the structures seen today on the hill are of the ruined Ottoman Arab village of “ez-Zakur”.

The area of was  examined in the Palestine Exploration Foundation (PEF) survey (1866-1877) by Wilson, Conder and Kitchener.   A section of their map is here: 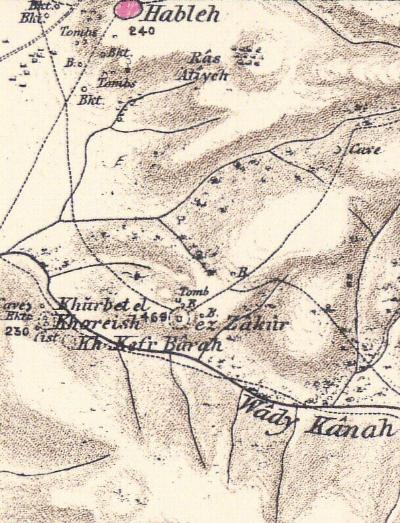 The survey did not provide details on the site. A nearby site does appear (volume 2, p. 337):

An archaeological  survey was conducted in 1968. It appears as site #111 in the Kfar Sava segment of the archaeological survey of Israel.  The dating of the findings include the Iron Age II, Persian, Hellenistic, Roman/ Byzantine, Early Islamic, and Ottoman periods.

In 1997 a salvage excavation was conducted, examining the quarries and cavities on the northern slope of a hill, on the northern side of Nirit (site #107).  Among the two tombs examined in this excavation, their findings were dated to the Iron Age II and Byzantine periods.

Another salvage excavation was conducted in 1998 on 2 burial caves in Nirit, 500m NW of the site. The archaeologists dated the burial findings to the EB IB, Herodian  and Byzantine periods. An earlier survey of the caves dated the findings in the caves from the Iron Age thru the Ottoman periods.

The area around the site became a memorial park managed by KKL (Keren Kayemeth LeIsrael – Jewish National Fund). The park commemorates captain Hezi Sapir, who was killed in 1994 by a suicide bomber in Gaza.

A drone captured this view from the north east side of the summit. The ruins of the village are noticeable on the summit and the northern slopes. The valley of Nahal Qana is behind the hill on its southern slope. In the far background is the coastal area of central Israel. 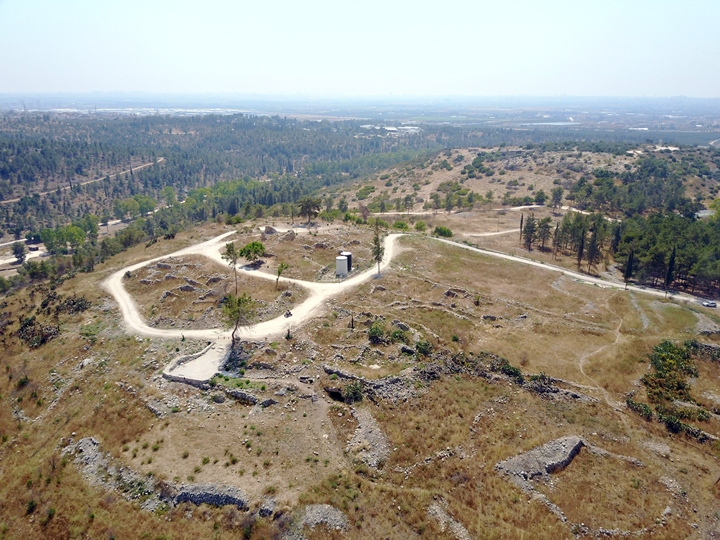 Another view from the west side is seen in the next aerial view.  An observation point, part of the memorial park, is located on the summit under the large tree. In the far background is the security fence between Israel and Samaria. To the right side is the community of Oranit. 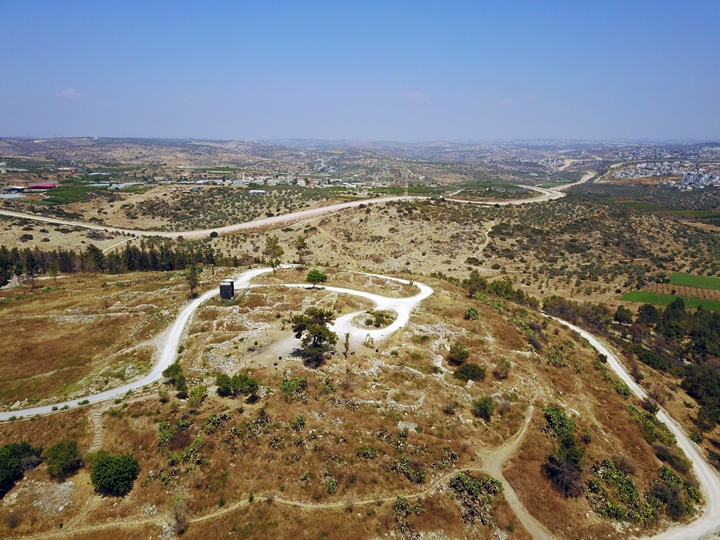 (b) Tour of the site 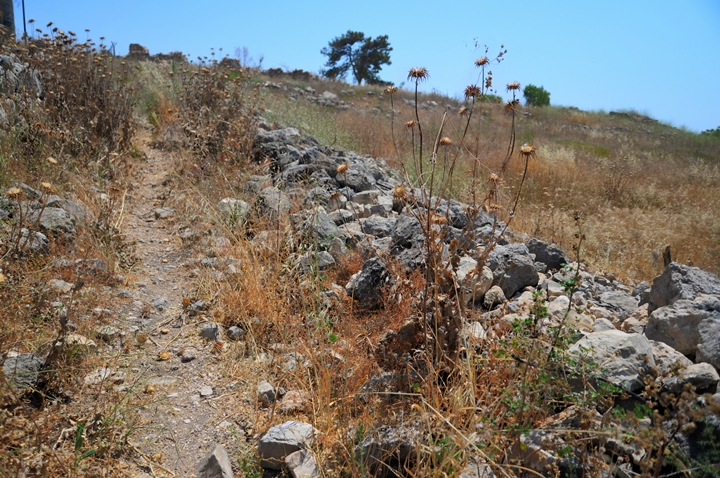 The following is a north view from the edge of the path towards the houses of Nirit. 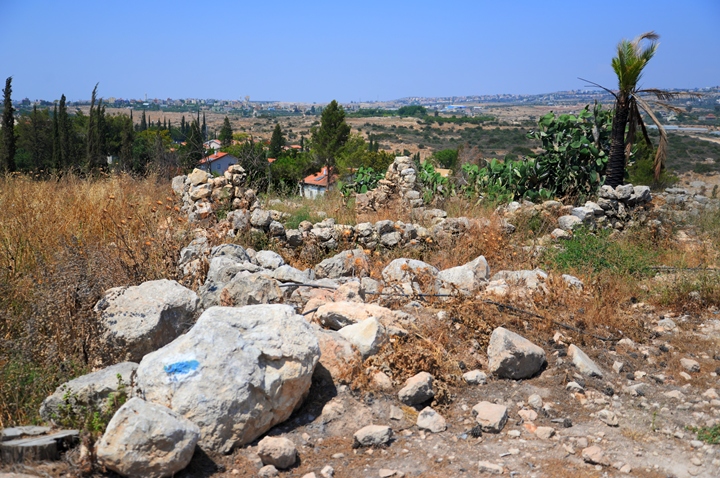 On the summit are remains of a large structure. 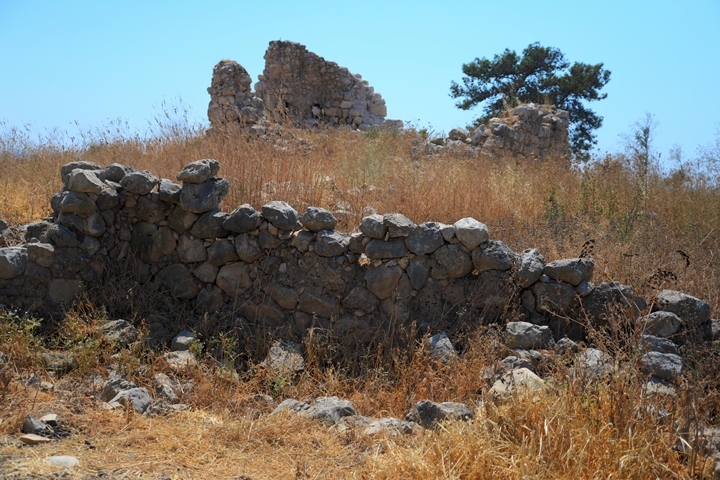 Another view of the largest structure: 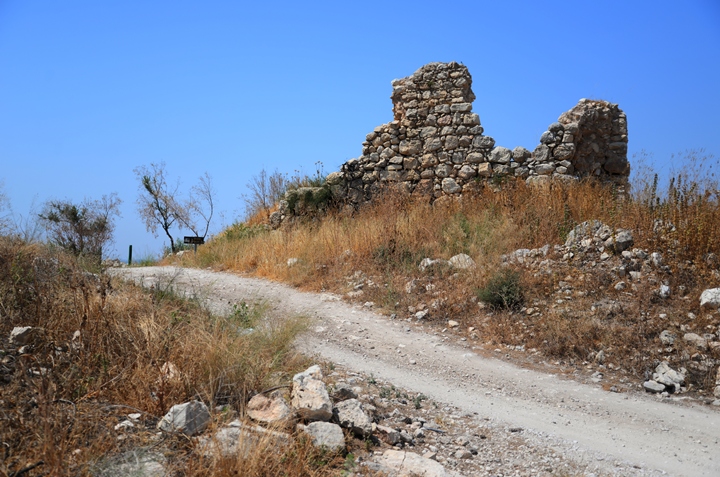 A trail leads up into the remains of the structure. 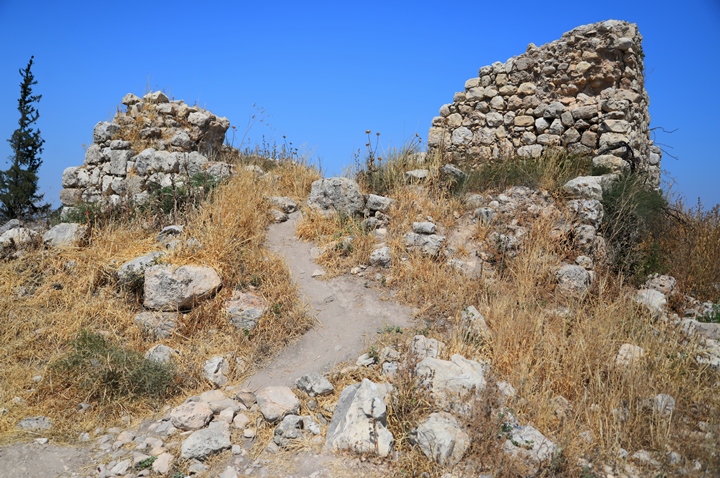 An observatory area, commemorating Hezi Sapir, overlooks the west bank. The security fence is where the bright line crosses the hills from left to right. On the right background is  the community of  Oranit. 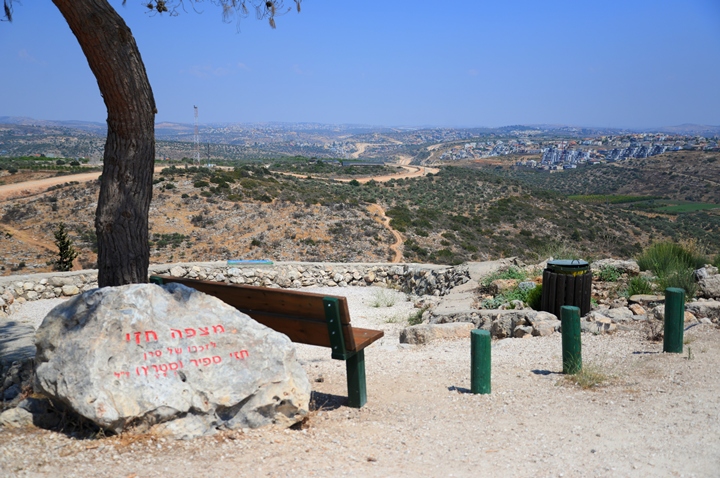 A cave is located near the observatory area. 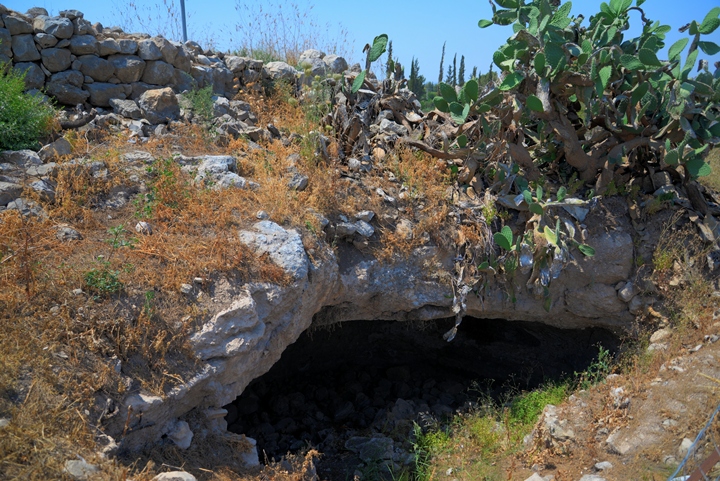 On the south side are remains of a street that faced outwards towards the Nahal Qana stream. 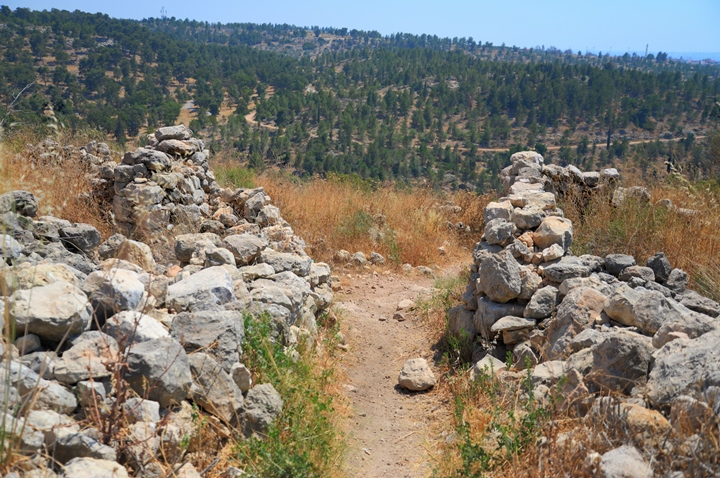 A view towards the south west is in the next photo. On the hill across the valley is yet another ruins, with a structure and a cave. 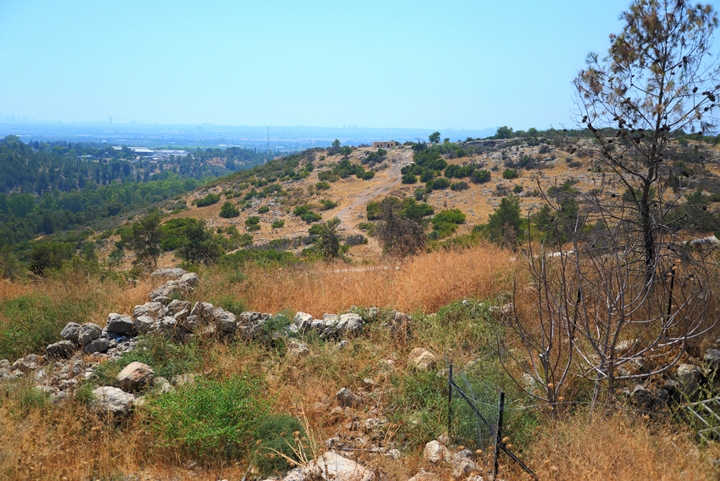 The ancient village depended on farming for income. Near the parking area is a display of  elements of farming installations that were found scattered in the ruins of the village. These elements are dated to the Roman/Byzantine period. 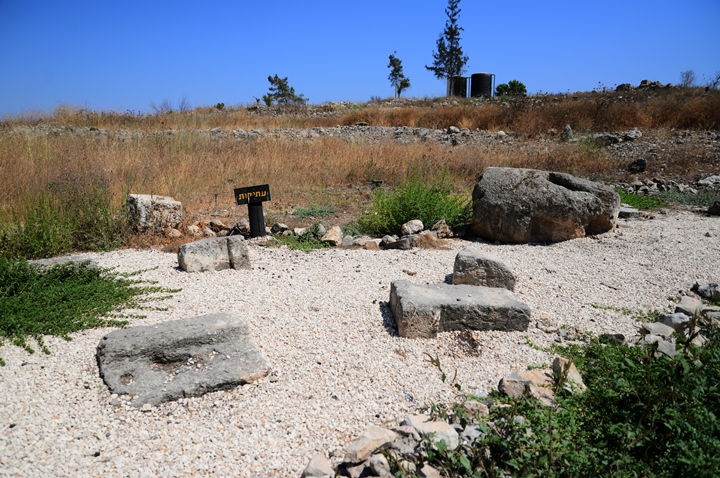 One of these elements, seen below, is a crushing basin, part of an olive oil press.

This oil press used a large rolling stone to crush the olives on top of the crushing basin.  The stone was held upright by an axis, which was connected to a long handle. The handle was pushed by humans or animals. The mashing stone rolled along a cavity  on the circumference of the  base, crushing the olives. The crushed olives would then be collected into a basket and then further processed by the oil press. 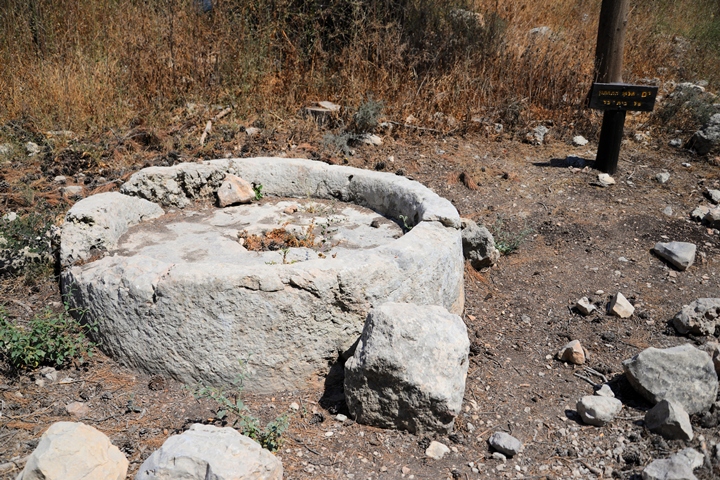 The second phase of the olive oil production was to press on the crushed olives, which were placed inside baskets. The cylindrical stone weight of an oil press is in the next photo. It was part of a lever-screw-cylindrical weight (“type 6”) oil press. This press used the force of the weight to push down a wooden lever unto the baskets, squeezing out the precious olive oil. 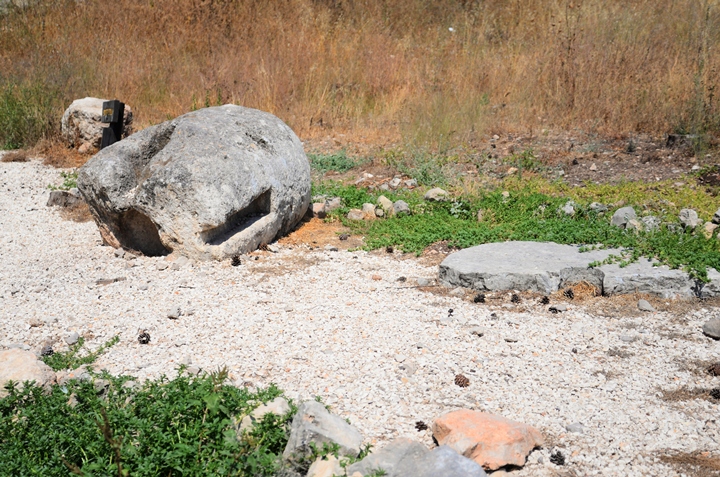 Nearby are remains of a winepress, including the treading floor (where the grapes were laid and fermented), collecting pool (where the juice is accumulated) and underground storage area (a cool pit where the wine was kept inside jars). 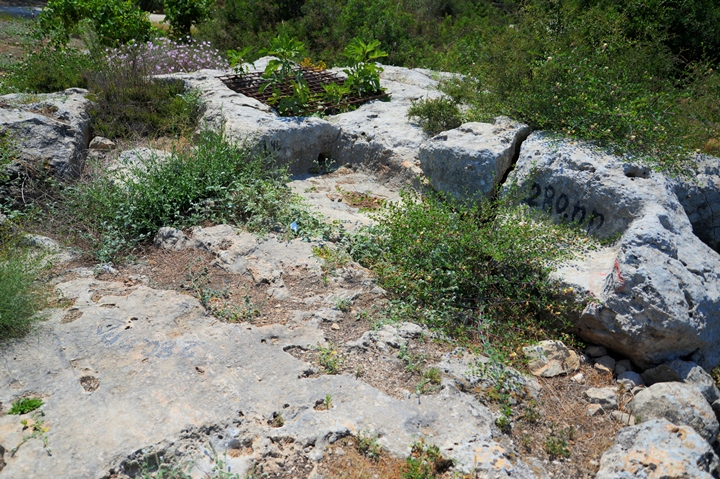