The village is located on the east side of via Maris, the main ancient road from north (Damascus, Syria) and the south (Cairo, Egypt). For thousands of years caravans have passed this village. Even today the Israel’s main Toll road (#6) passes close to this site.

The site has been identified with Biblical “Gilgal” of the Sharon (not to be misplaced with the city on the Jordan river). The only remains that are seen today are located at the west side of the congested Arab village: the ruins of a large Khan (inn, motel), and a Crusaders sugar factory.

According to the ceramics survey in the village, the site has been inhabited from the late Bronze period (1550-1200 BC), through the early and late Israelite/Iron period (1200-1000 BC, 1000-586 BC), and on to the Persian period (586-332 BC).  Therefore, the scholars identify the place with “Gilgal” in the Sharon, as referred in Joshua (see references). The name of the Arabic village (Jaljulia) preserved the ancient site’s name.

The ceramics and other findings show that the site was inhabited in the early Arabic and Crusaders period (640AD-1099AD,  1099 AD-1250 AD). In the east side of the village are ruins of buildings from the Crusaders period and the Mamelukes period (1250-1517 AD).

The area of was  examined in the Palestine Exploration Foundation (PEF) survey (1866-1877) by Wilson, Conder and Kitchener.

A section of their map is here on the lower right side.  Notice the double dashed lines, indicating major ancient roads, that cross the modern village, with the ruins of “el Khan” (Ottoman period caravanserai, inn, or: motel) on its west side.  The west-east road is from Jaffa to Jerusalem, while the north-south road is from Damascus to Egypt.

“Jiljilia – A large village on the top of a high hill, with a well to the south, and a few olives. The ridge is arable land.

The name suggests its identity with Gilgal, a town in the mountains near Bethel. This Gilgal (2 Kings 2:10) is mentioned as though above Bethel (verse 2), which does not agree exactly with the position of Jiljilia (2,441 feet above the sea), and of Beitin (2,890), but the descent into the great valley, Wady el Jib, may account for the expression, ‘went down to Bethel’.”

“Jiljulieh – A large mud village in the plain, with a fine ruined mosque, and a ruined Khan. It is supplied by a well on the west. This place is perhaps ‘Gilgal of Nations’ (Joshua xii. 23), a place apparently in the maritime plain”. 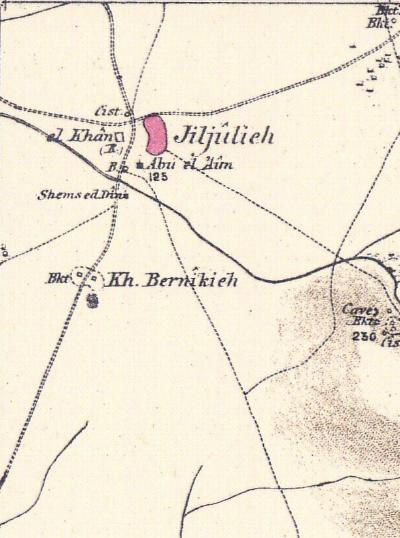 (a) Tomb and Crusader Sugar factory:

A large sacred Arabic tomb is in the north side of the modern cemetery east to the main old road. According to Arabic tradition, it is the holy tomb of Shams E-Din, Saladin’s general. 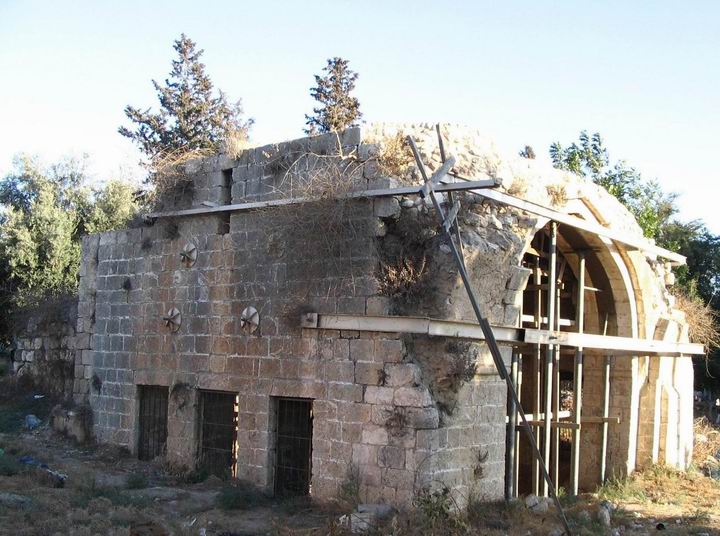 In the Crusaders period this building, now in restoration, was used as a sugar factory (“Miskara”). The sugar canes  were grown in the area and brought to the factory. Then they were chopped, smashed, boiled, then poured into pots. During the cooling the juice would crystallize into sugar, and sold. The water that was used in the process was fetched from the well nearby and the factory was operated by oxen.

In Cypress, near Kolossi,  Limassol, there is a similar sugar-refining factory which was also built by the Crusaders. Another sugar processing factory is located in the west upper Galilee – in Manueth (Manot). The sugar industry was mainly managed by the Knights order of Hospitallers, while the Knights order of Templars managed the wheat business in the Holy land.

A detail inside the building. Its entrance is towards the west and it is built in Gothic style. 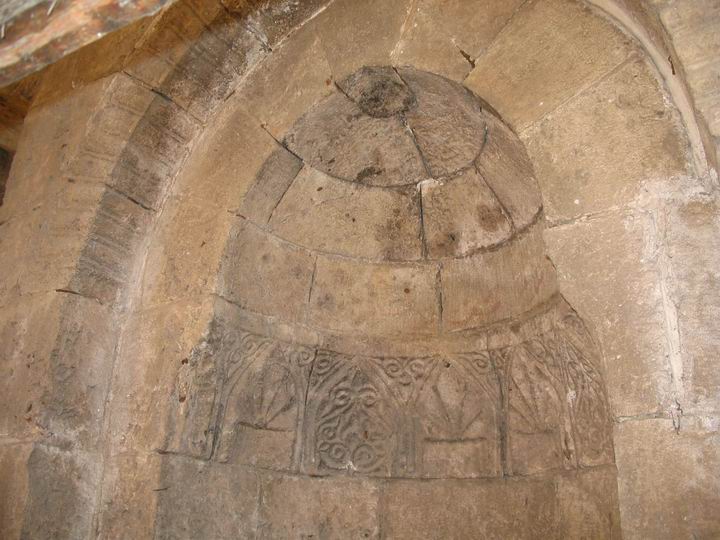 North to the sugar factory is the ruins of a large Khan, an important and impressive  middle-ages Motel that used to host the caravans from Damascus (Syria) to Cairo (Egypt). This Khan was built in the 13th century AD.

The Khan was constructed during the Mameluke period, and was an important station on the crossroads of major trade routes and the postal road from Cairo to Damascus. This road was initiated by the first Mameluke emperor, Bybars, in 1268. It served the Mameluke empire until the 16th century. 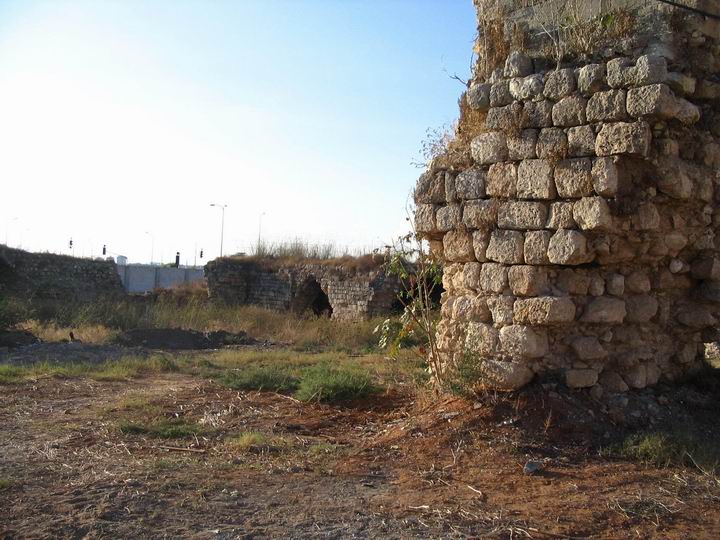 A detail of one of the rooms of this large roadside motel. A lot of the stones have been stolen for reuse in the houses around. The site is also filled with rubbish, hopefully one day the municipality will clean it up and restore parts of it, bringing back a touch of its glory. 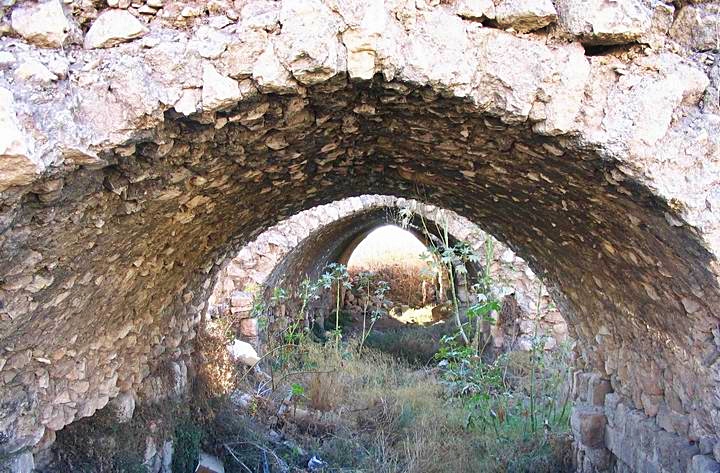 Gilgal of the Sharon is mentioned in the list of Kings that were defeated by Joshua and the Israelites:

The king of Dor in the coast of Dor, one; the king of the nations of Gilgal, one;”.