Tarbenet  was a Roman & Byzantine village in the Jezreel valley. A statue of Hercules was found in the salvage excavations during the construction of the new railway. 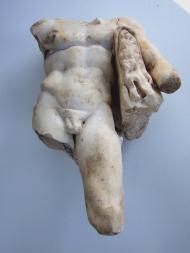 Tarbenet was a Roman/Byzantine village in the Jezreel valley. Its ruins are located at the site called Khirbet Tarbana, located along the path of the Ottoman railway. A salvage excavation was conducted on its south side during the construction of the new Jezreel Valley railway. The excavators unearthed a rare marble statue of Hercules in a structure which was a Roman bath.

The following aerial view shows the points of interest.  The excavations are located near the track of the ancient Ottoman railway, where the future railway is intended to pass. 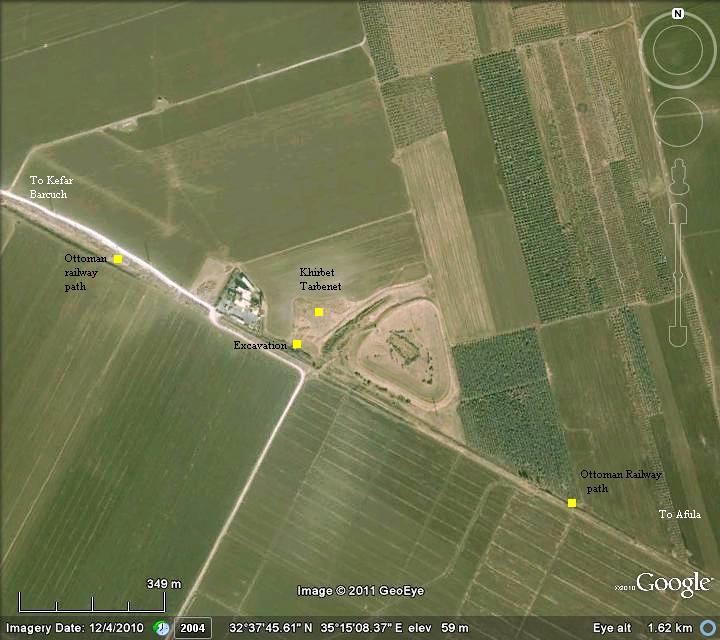 The site of Tarbenet (marked as a red square) is located in the center of the Jezreel valley. It was located near the ancient trade road which connected  Shimron to Mount Tabor, Afula, Megiddo and other east Galilee cities. 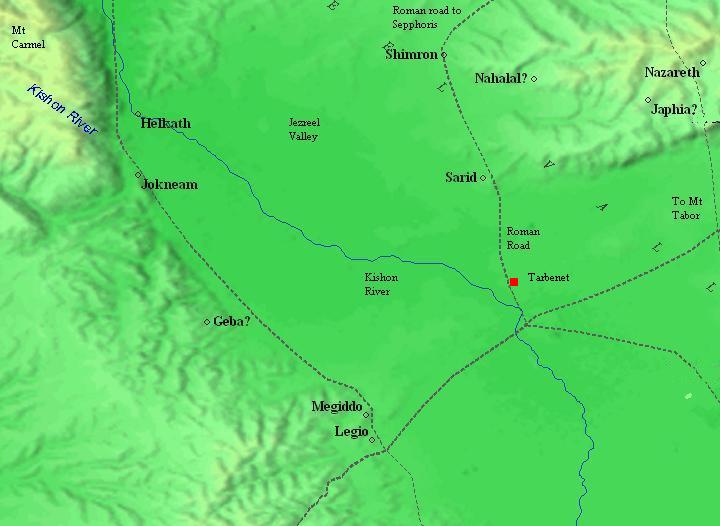 Map of the area around Tarbenet-From Canaanite/Israelite periods to the Roman period  – 15C BC through 3 C AD  (based on Bible Mapper 3.0)

In the Roman times a major military Roman road passed nearby. This road connected Sepphoris to the Roman camp in Legio (Megiddo), and from there to the south of Israel and Egypt.

During the 2nd century AD there was a surge in the population in the Jezreel valley. After the destruction of Jerusalem during the great revolt against the Romans, and after Judea suffered another destruction after the Bar-Kochba revolt , the focus of Jewish leadership and life moved to the Galilee.

Tarbenet was one of these villages. It was situated along the Roman road to Legio, and located in the center of the fertile valley and not far from the Kishon river.

Tarbenet is known from the Jewish Talmud, the 5th century AD books of religious practices, an extension and interpretation of the earlier texts of the Mishna (which compiled the oral traditions in about 200AD). One of the books (Y. Megillah 4:5) wrote about a case of a 3rd C teacher/reader,  Rabbi Shimon Safra of Tarbenet, who read the ten commandants  at a fast pace, and his students could not follow him.  The villagers of Tarbenet insisted that he should stop between the verses, but he refused – claiming that he cannot interrupt the Torah of Moses. Although the important Rabbi Hanina defended his refusal , the villagers of Tarbenet dismissed him.

The site may have been destructed in the early Arab period (7th century) or following an earthquake in the 8th century.

The area around Horvat Tarbenet  was  examined in the PEF survey (1866-1877) by Wilson, Conder and Kitchener. Tarbenet appears in the center of this section of the map and is named “Tarbaneh”. Their report (Sheet VIII p. 68) was: “Traces of ruins by the springs”. 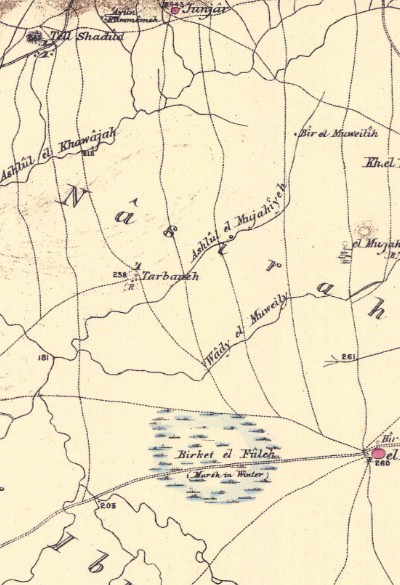 Other points of interest that appear on the map:

Tarbenet, now known as the ruins of Khirbet Tarbana (the Arabic name preserved the ancient name), was slightly damaged by the Ottoman railway, which passed on its south side. The Roman bathhouse, which was excavated here in 2011, is adjacent to the mound left from the dismantled railway.

The Ottoman railway is now being resurrected, and work has begun in constructing a modern railway which follows most of the original historic segments between Haifa and Beit She’an (but does not yet continue to Hejaz). The work started with excavations along the route, with many of the sites buried under or near the original track. This is a golden opportunity for the archaeologists who can now dig along the planned route.

Only a fraction of the south side of the site has been excavated, while the majority of the site is covered by soil, thorns and weeds. On the top of the hill is a small old structure. On the left background are the hills of Nazareth.

A small rectangular structure was excavated close to the area of the springs. 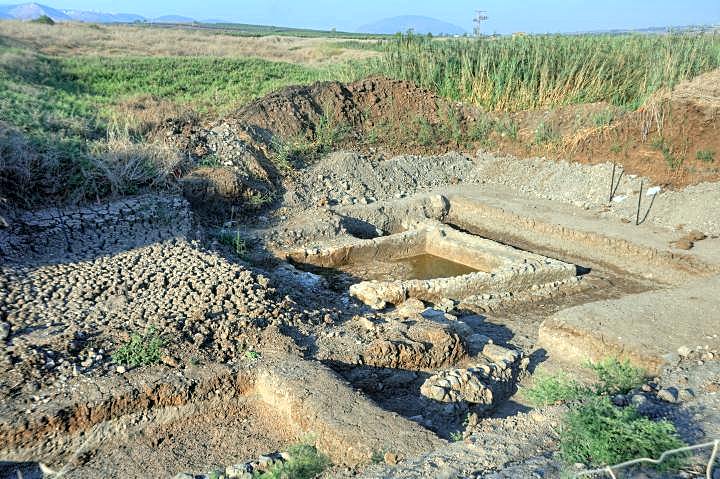 The IAA report describes the finding:

“In an archaeological excavation conducted at the site remains were discovered, among them dwellings, a built well and an installation that included a large pool which was probably part of a Roman bathhouse. Benches were found on two sides of the pools. The well, which is 2.90 m in diameter and in excess of 4 m deep, had a saqiye type pumping installation constructed above its opening. A drainage channel that extended as far as the pool was built alongside the well. It seems that the well and channel were meant to supply water for the pool. After the pool was no longer being used it was filled in with a layer of earth that contained numerous potsherds, an abundance of broken glass vessels and the marble fragment of the statue of Hercules. The complex that was discovered apparently underwent a number of changes and it is dated to the Roman and Byzantine periods, until the beginning of the Early Islamic period”. 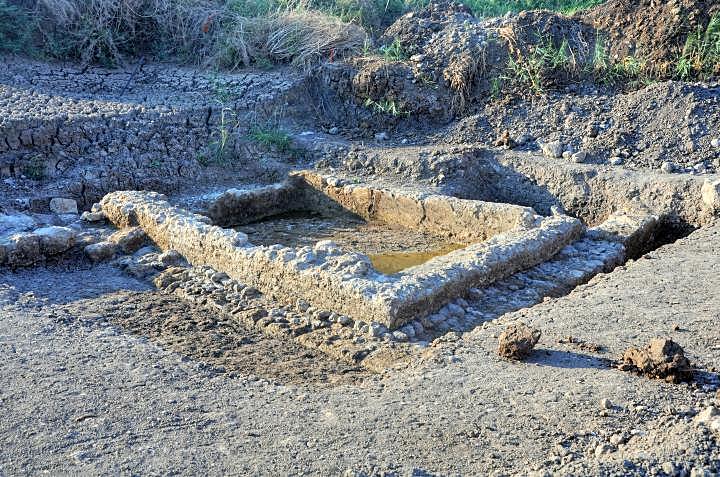 One of the most interesting finds in the recent salvage excavations is the finding of a small (0.5m long) statue of Hercules, made of fine white marble. It was probably standing in the 2nd century AD Roman bathhouse.

From the IAA press release:

“According to Dr. Walid Atrash of the Israel Antiquities Authority, This is a rare discovery. The statue, which probably stood in a niche, was part of the decoration of a bathhouse pool that was exposed during the course of the excavations. It is c. 0.5 m tall, is made of smoothed white marble and is of exceptional artistic quality. Hercules is depicted in three dimension, as a naked figure standing on a base. His bulging muscles stand out prominently, he is leaning on a club to his left, on the upper part of which hangs the skin of the Nemean lion, which according to Greek mythology Hercules slew as the first of his twelve labors”. 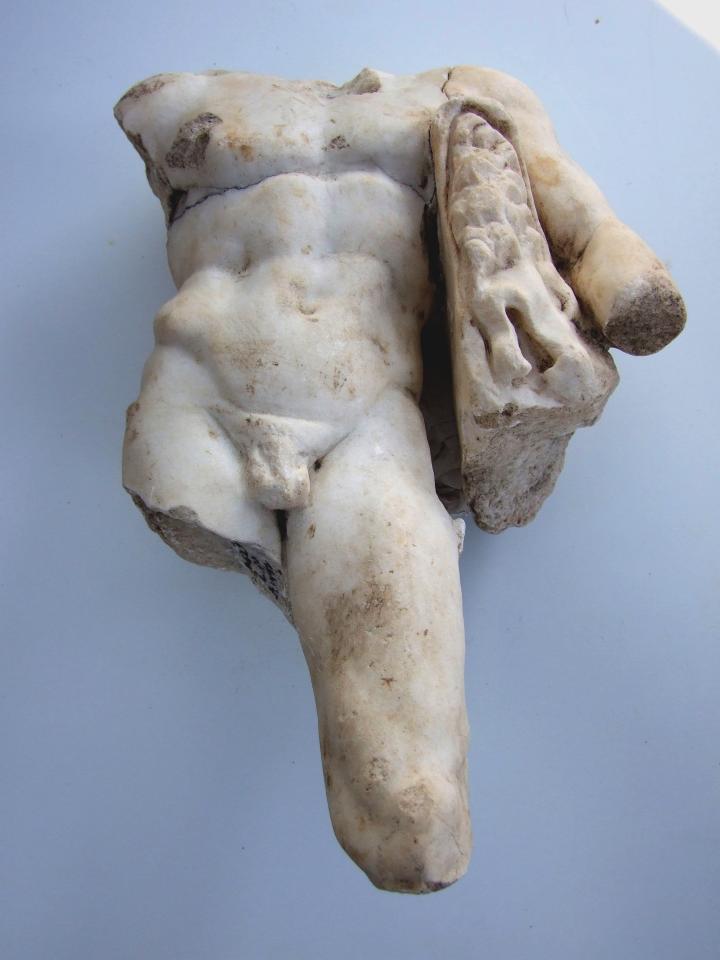 More from the IAA press release:

” The hero Hercules, of Greek and Roman mythology, was born in Thebes. He is the son of the god Zeus and the mortal Alcmene, a woman from Electryon. Hercules is considered the strongest man in the world, a symbol of power, courage and superhuman strength; one of the most famous legendary heroes of ancient Greece who battled the forces of the netherworld on behalf of the Olympian gods. Hercules is described as hot tempered, and he often times acted impetuously and with uncontrollable rage. Greek mythology has it that Zeus wife, Hera, expressed her jealousy and fierce hatred of Hercules from the day he was born because he was the product of her husbands infidelity. While he was just a baby Hera placed two poisonous snakes in his bed, but he managed to overpower them. Later, in a fit of madness brought on by Hera, Hercules killed his three sons and his wife Megara, whilst she attempted to protect the smallest of them. In order to atone for his terrible sin, the Oracle of Delphi ordered Hercules to go to Eurystheus, king of Mycenae, and perform whatever the king commanded him to do. Among the kings commands were twelve superhuman feats known as the Labors of Hercules. Depictions of the labors of Hercules are among the most common themes in ancient art and the statue that was discovered portrays Hercules first task”. 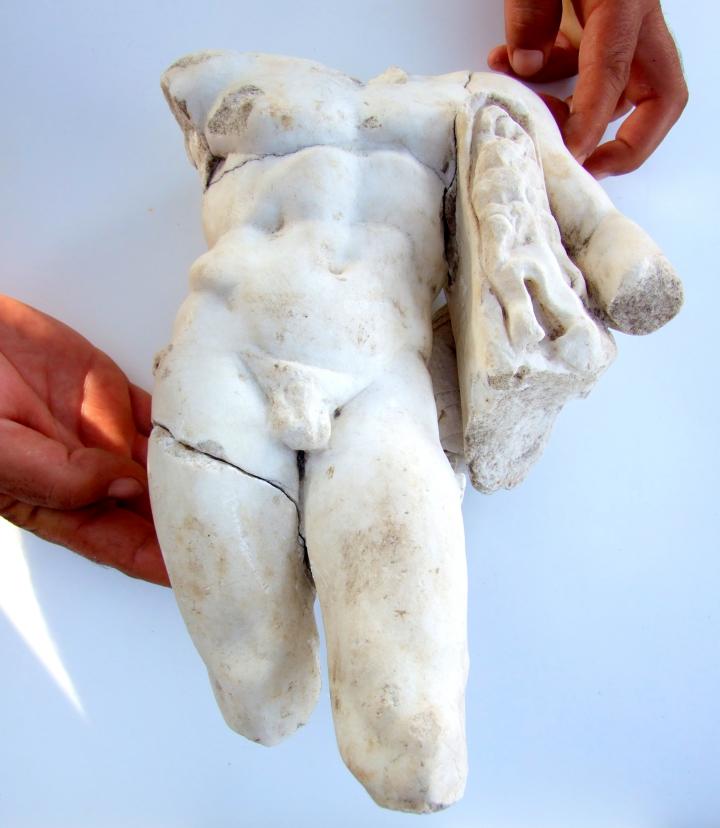 The salvage excavation also unearthed several dwellings, on the west side of the pool. 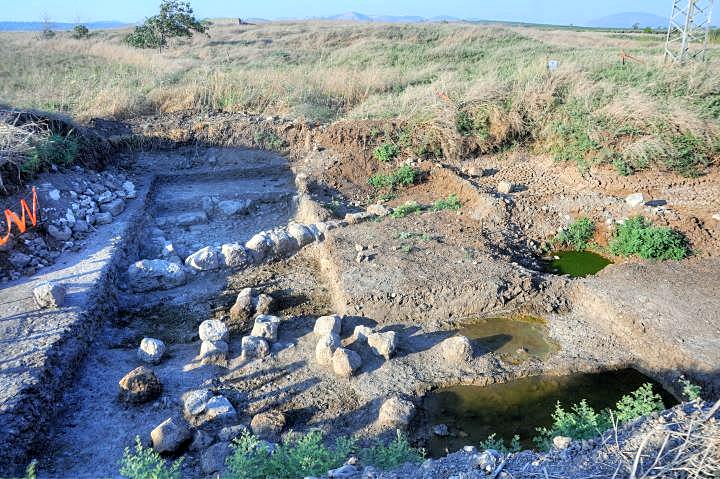 The rest of the site is much larger, but since there are so many sites in the Holy Land to dig, it will remain covered for the time being.

The raised earth, which was the base of the Ottoman Hejaz railway, is seen in the following east view. The ancient railway cuts through Horvat Tarbenet on its south side. The new modern railway will also pass through the same route as the historic railway, and the excavation was necessary in order to save the antiquities before they are going to be bulldozed and covered.   The modern city of Afula, also known as “The Capital of the Valley”,  is seen in the background. 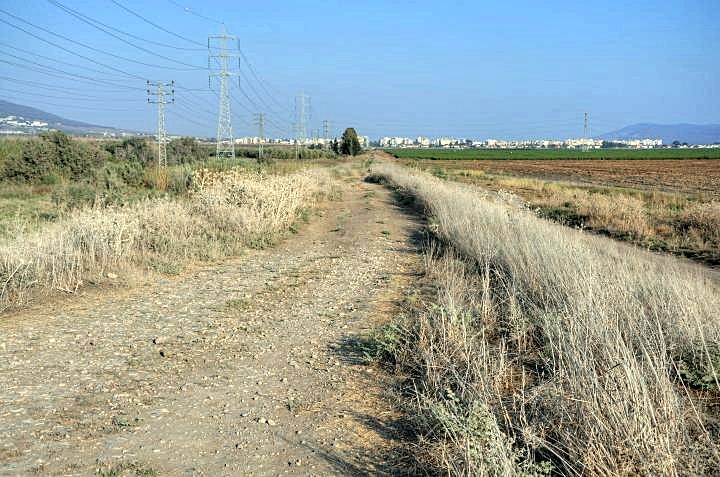 The Ottoman railway continues eastward towards the Jordan river, passing through Beit Shean, where a large station was located.  In recent archaeological excavations, the ground around and under the tracks were excavated, as seen in the picture below. This place will also be the last terminal of the new railway, and the excavations are conducted before the new tracks are constructed. 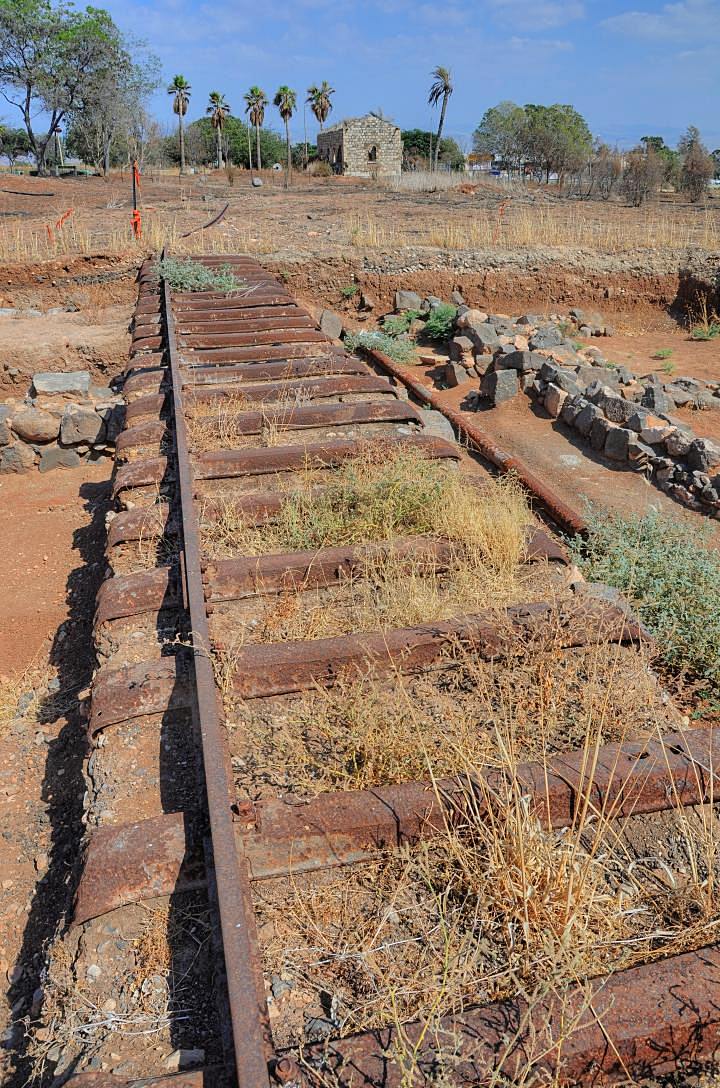