This page is a gallery  of the Biblical sites that were selected by BibleWalks.com staff and readers as the “site of the month” during year 2010.

One of the largest and most important ancient mounds in the Galilee. Inhabited from the Bronze age to the Roman period. Recent excavations focus on the Persian/Hellenistic period.

A large mound located in the Beit She’an valley, with remains from the Canaanite and Israelite periods. This is an active archaeological dig which continues to shed light on the Biblical period. 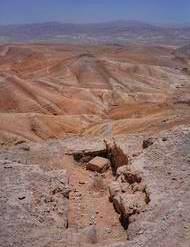 A newly discovered Roman imperial temple complex, south-west of Banias (Caesarea-Philippi). Its temple is identified as the Augusteum described by Josephus and built by Herod.

Josephus (Wars 1 21):”…he (Herod) built there also a temple of white marble, hard by the fountains of Jordan”.

A nature reserve and the source of the Dan and Jordan rivers. An impressive archaeological site with unique  remains of the Canaanite and Israelite cities and a Biblical High Place.   (5 web pages)

An impressive Greco-Roman city located near a flowing spring – one of the sources of the Jordan river on the foothills of the Hermon mountain. A Roman sanctuary, which included temples and ritual courtyards,  was built near the sacred grotto of Pan.

The temple mount is the place where the Biblical temples were built, starting from King Solomon almost 3,000 years ago. Herod’s temple was destroyed by the Romans and never rebuilt again by the Jews. It was replaced by the Muslim shrines in the 8th century AD which stand there today, with the Golden Dome of the Rock –  the city’s symbol. 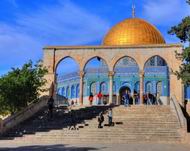 Gamla, a large fortified city located on a high ridge above a crossing of two gorges,  is one of the famous cities where Jewish rebels fought bravely against the Romans until their fatal end.

The ruins of the village are located on a hill, above the delta of the upper Jordan river, a fertile area with many ancient villages. It was a Biblical city in the land of Geshur, and a Roman city, the site of Jesus’ two miracles.

Mark 8:22: “And he cometh to Bethsaida; and they bring a blind man unto him…”

Ruins of a famous Roman period settlement on the NW shore of the Dead Sea. This was the home of the Essenes, a break-away religious sect. Scrolls of Biblical and other books, hidden in jars, were discovered in the caves around the site.