This page shows the recently added sites, starting from newest  on the first line. The purpose of this page is to keep a track of the changes of the featured Biblical sites in the web site.

To see more of the newly featured site, click on its header.

A Benedictine monastery in Abu Ghosh, built on the foundations of a 12th century Crusaders church, near the ancient road to Jerusalem.

A large archaeological site in the Judean Shephelah region, with remains of a rich Early Roman period rural settlement and a Byzantine church. 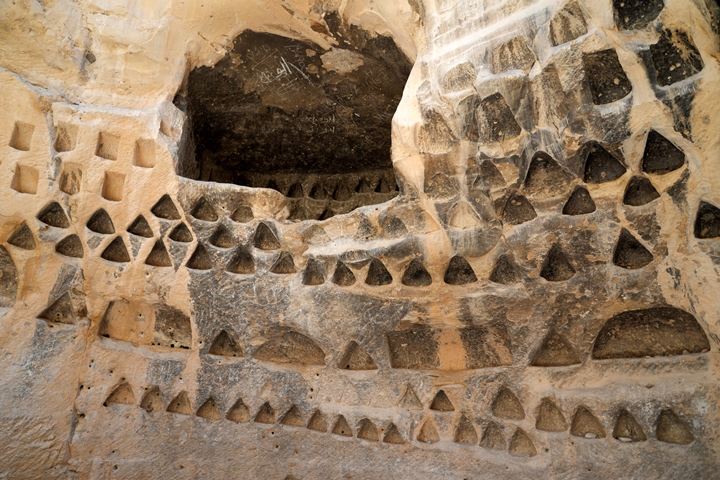 Ruins of an Early-Roman Jewish rural village in the Judean foothills region, south of the valley of Elah. The remains include residential houses, cisterns, several ritual baths (Miqveh), ancient synagogue, wine presses and other farming installations.

Yarmut (Jarmuth) was a major Early Bronze II-III period city, located on a vast mound overlooking Ramat Beit Shemesh. A monumental Early Bronze III palace was exposed on the lower city. Occupation continued 1000 years later on the upper city during the Late Bronze and Iron Age periods, and was one of the Amorite cities that attempted to block Joshua and the Israelites.

An elaborate underground complex of Early Roman tombs located in the Sanhedria neighborhood in Northern Jerusalem.

Ruins of a royal palace and administration center, on the south outskirts of Jerusalem, overlooking the road to Bethlehem and Hebron.

Tel Haror – Ruins of a multi-period massive Biblical city. A possible identification is Gerar, an important royal city in the age of the Patriarchs.

In Jaffa are several public fountains (Sebils) dated to the Ottoman period. 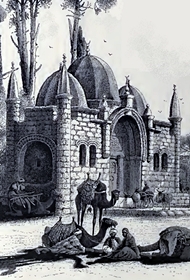 Sharuhen was a major Canaanite city in the western Negev area, situated on the way from Egypt northwards and from the coast eastwards. The Canaanite city was the last stand of the Hyksos after their expulsion from Egypt in the 16th century BC. Some scholars identify it in Tell el-Farah.

A lookout place on Mt. Gerizim, with great views of Tel Shechem, modern Nablus,  and  the tomb of Joseph. Joshua 24:32: “And the bones of Joseph, which the children of Israel brought up out of Egypt, buried they in Shechem…”.

Ruins of a Middle Bronze Age fortress are located on an edge of a cliff overlooking the deep gorge of Nahal Kziv.

Ruins of a Biblical city. Some scholars suggest this was Ramathaim Zophim – the home city and place of burial of prophet Samuel.

Ruins of an unknown  Hasmonean/Herodion fortress on a hilltop on the bend of Nahal Natuf stream.

Ruins of an Iron Age fortress and village, identified as the home town of Jeroboam son of Nebat who split United Monarchy.

A large archaeological mound on the bank of Nahal Gerar, identified as David’s Ziklag.

Ancient winery complex, oil presses, tombs and spring in and around the community of Halamish/Neveh Tzuf.

On the hill are ruins of a village and agriculture installations dated to the first temple and Roman/Byzantine periods.

Ruins of a roman period settlement, with agriculture installations, cisterns and hiding complexes. Perhaps this site is related to the Timrat Sabbath stone.

Remains of a Crusader fortified farmhouse, in the center of et-Taiyibe in the Jezreel valley.

Tel Hazor is one of the largest, most important biblical sites in the Canaanite and Israelite periods. The Bible gave it the title: “the head of all those kingdoms”.

The site is  located on an extinct volcano. It was a Canaanite and Israelite city (Adamah?), but best known for the crucial battle between Saladin and the Crusaders in 1187.

And the fenced cities are … Rakkath, and Chinnereth, and Adamah, …”

Megiddo was an important Biblical city. The site is situated on the gateway on the road linking North and South of Israel, about 30 Km south-east of Haifa.  The archeologists uncovered 26 layers of ancient cities.

Remains of a Biblical city, dated to the times of David. Its name means “two gates”, which were found in the excavations of Khirbet Qeiyafa.

Ruins of an Early Roman fisherman village, near the Arbel cliffs, on the shores of Sea of Galilee. Known as the birthplace of Mary Magdalene. 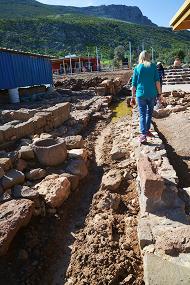 1 Samuel 13:5: “And the Philistines gathered … and pitched in Michmash“

Ruins of an ancient village in the Gofna mountain region in Samaria. Nearby is a memorial park with pools and springs.

Ruins of a fortified village situated near the Lebonah ascent. Identified as Kfar Lakitia – one of the Roman garrisons at the end of the Bar- Kokhba revolt.

Kh. Tibneh, in the hill country of Ephraim, is identified as Timnath- Serah or Timnath-Heres – the burial-place of Joshua according to the Bible.

The Biblical city of Arumah is situated on a steep hill southeast of Itamar. On its foothills are huge cisterns and ruins of Hasmonean fortifications.

Sites along the Allon Road, that crosses the eastern side of Samaria from North to South.

Ruins of a Canaanite and Israelite major city located on a hill near Samiya spring.

A Roman/Byzantine and Ottoman period village, located near a spring on the foothills of Mt. Baal-Hazor.  A unique Middle Bronze cemetery is located on its west side.

Ruins of a multi period village, from the Early Bronze to the Ottoman period, on the side of Allon road in Samaria.

Observation point on Mt. Saul, overlooking the Jezreel valley and Mt. Gilboa. Named after King Saul and his sons who died here fighting the Philistines.

Ruins of a Crusaders fortress, near a key river crossing over the Upper Jordan river.

Impressive and well preserved Nabatean site, a station along the Incense route.

Prehistoric sites, including a settlement, tombs and temple, dated to the Middle Bronze 1  period.

and brought it from Ebenezer unto Ashdod“.

Tel Zafit (Tell es-Safi) is one of the largest Biblical sites in Israel. Settlement  started in the Early Bronze Age, and was occupied with some interruptions for 5,000 years until modern times. It is widely accepted by scholars as the Philistine city of Gath – the hometown of Goliath.

Ruins of a large multi-period Canaanite city near Kiryat Gat, first fortified in the Early Bronze I period.

Ruins of a huge fortress dated to the Crusaders and Mamluke periods, on a high hill above the city of  Zefat.

BibleWalks.com – follow the Bible through the sites of the Holy Land