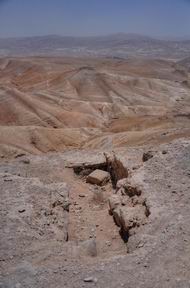 Jabal Munttar (“Mt of the Watchman”) is a high mountain in the Judean desert, overlooking the desert. On the top of the mountain are traces of ruins of a 5th C Byzantine monastery. The site may have been the Biblical place of the scapegoat annual ceremony (‘Azazel in Hebrew), where a goat was carried out from the temple to the desert and thrown away to the abyss.

Mt Munttar is 524M above sea level – the highest peak in the area. 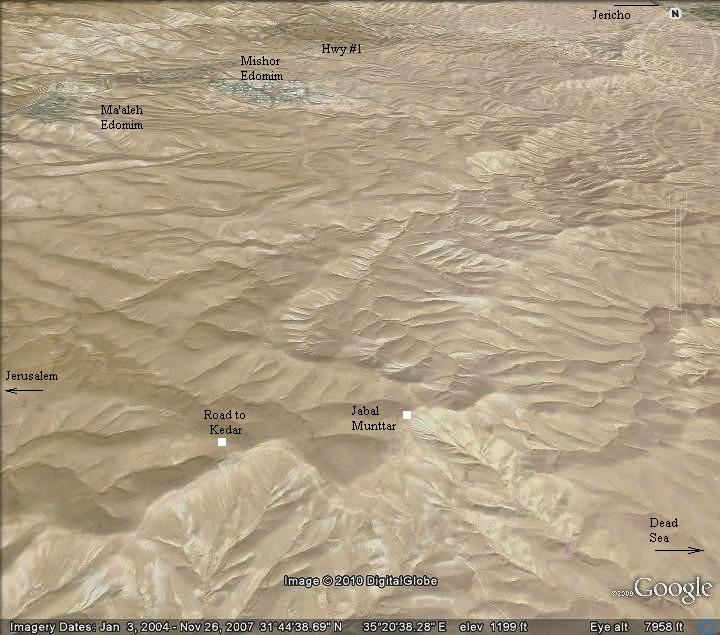 A Biblical tradition was to march a scapegoat from the temple to the desert and throw it away to the abyss, as part of the ceremonies of the day of Atonement. This was commanded in Leviticus 16 10: “But the goat, on which the lot fell to be the scapegoat, shall be presented alive before the LORD, to make an atonement with him, and to let him go for a scapegoat into the wilderness.”   The goat was believed to carry the sins of the people placed on it, and by sending it to perish the goat would take their sins away. 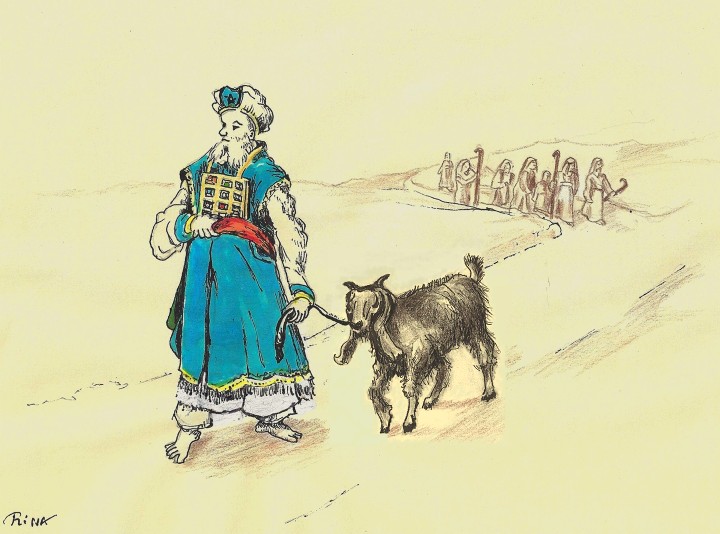 The site of Jabal Munttar fits the position and description of the place and scholars identify it with the place of throwing the scapegoat down the steep hillside (called in Hebrew “”Azazel”). 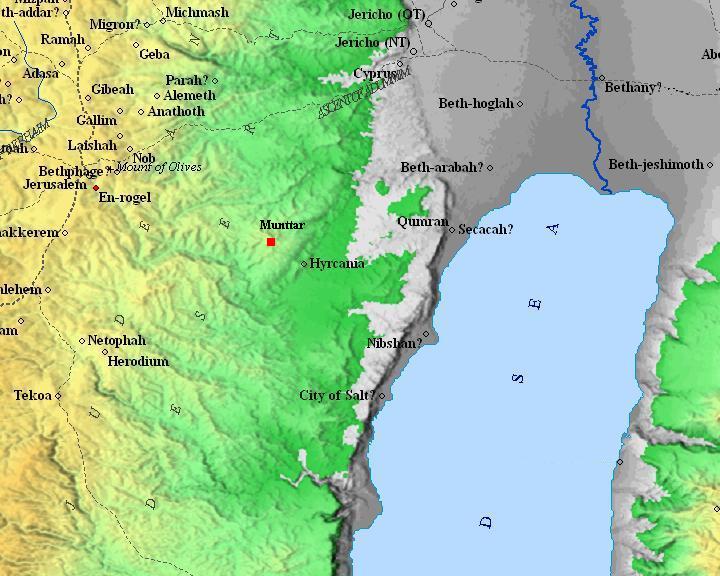 Map of the area around Munttar – during the Canaanite and Israelite periods  (based on Bible Mapper 3.0)

Starting in the end of the 4th century, monks started to populate the caves of the Judean desert. The Byzantine monks came here to seek the simplicity,  purification and the solitude of the desert.

The Eudocia monastery existed until the Arab period (7th century) and is in ruins since then.

The site today is deserted, and only few desert tours arrive to the site.

The area of the Judean desert is totally dry, with almost no trees and plants. Only during short winter rains the desert comes alive with low bush covering the soil, but during late spring this is already dried out, as seen in the photos.

Although the desert scenarios are alien to the modern people, its unique landscapes  inspire a sort of magical atmosphere. The land, untouched by the  modern world, is the closest match to the Biblical scene. Touring this barren land is like a time machine – returning you back to Biblical periods.  We highly recommend that you join an organized tour to the desert and witness this yourself.

The top of mountain is flat, and reached from the south side.  Around the plateau is a base of a wall, which was part of the 5th century Byzantine monastery. 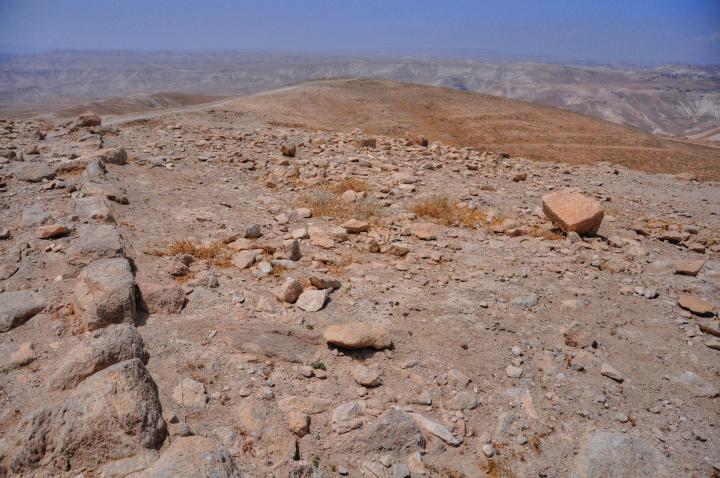 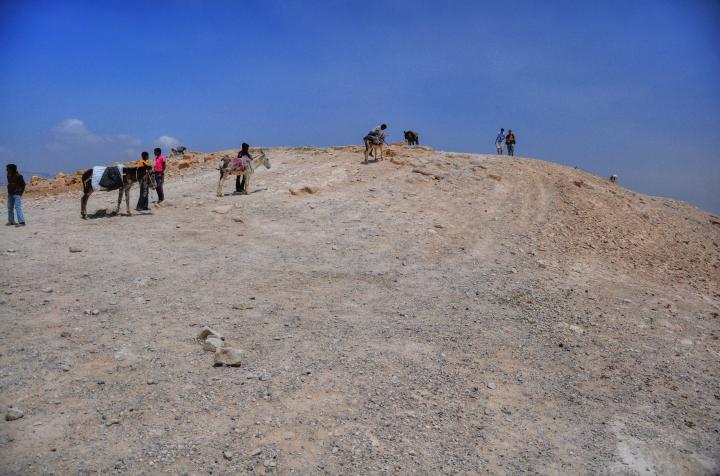 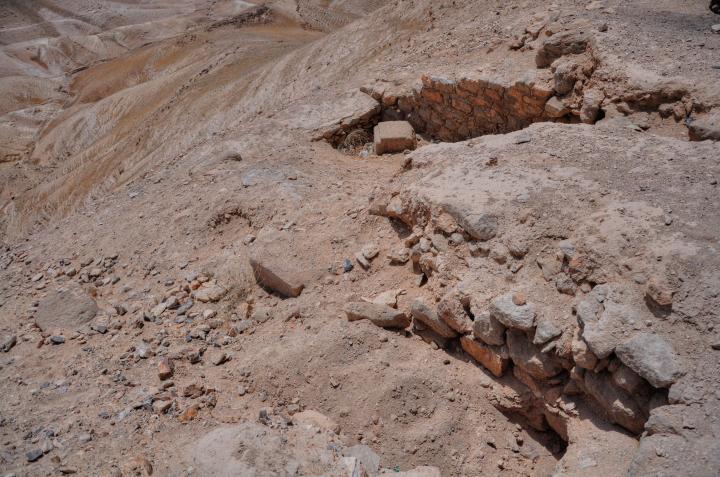 The site has not been excavated, yet in several locations on top of the hill are traces of the Byzantine ruins. These were part of the Monastery of Aelia Eudocia Augusta (401-460 AD), wife of the East Roman Emperor Theodosius II. 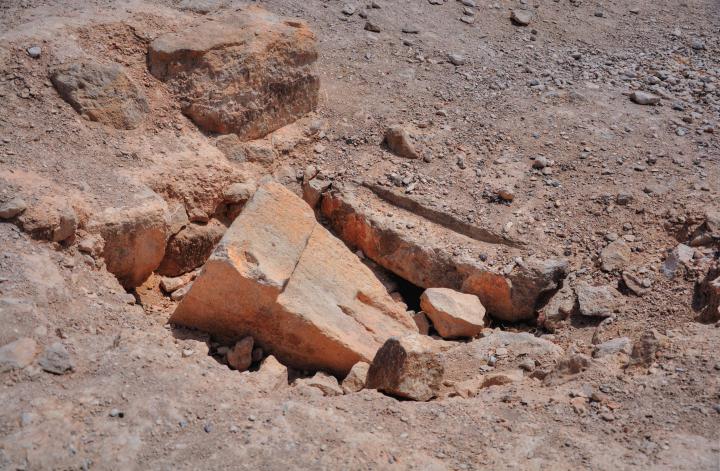 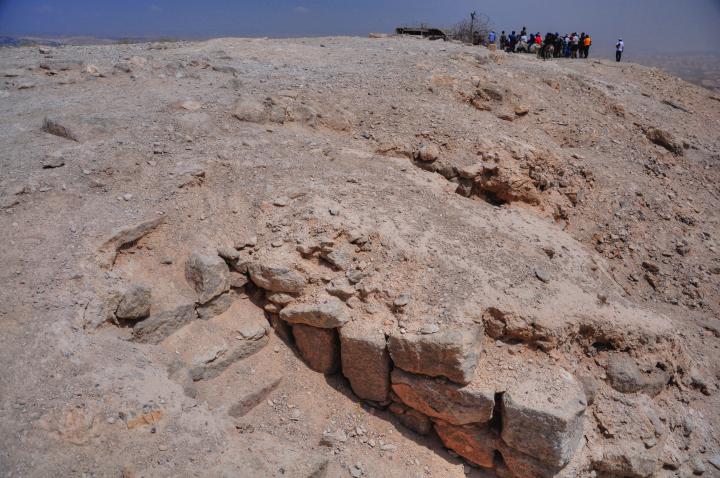 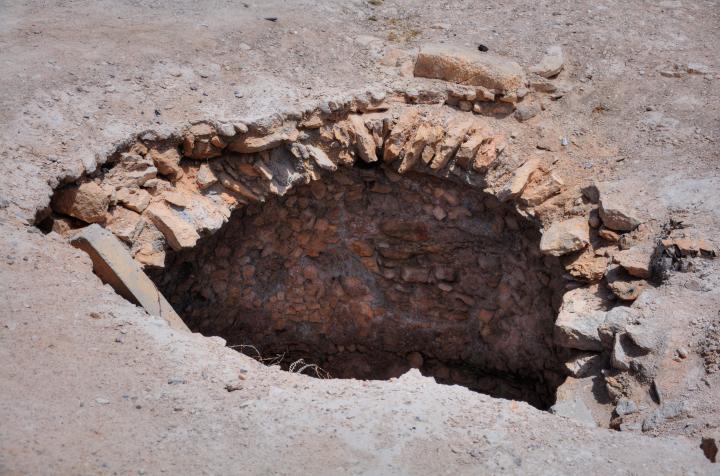 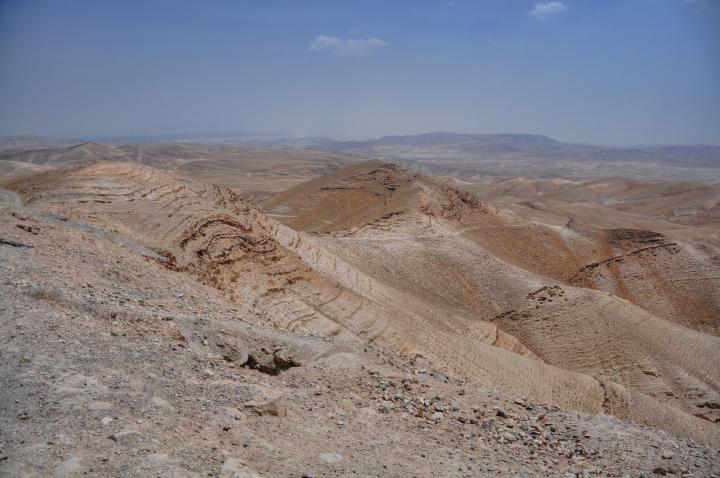 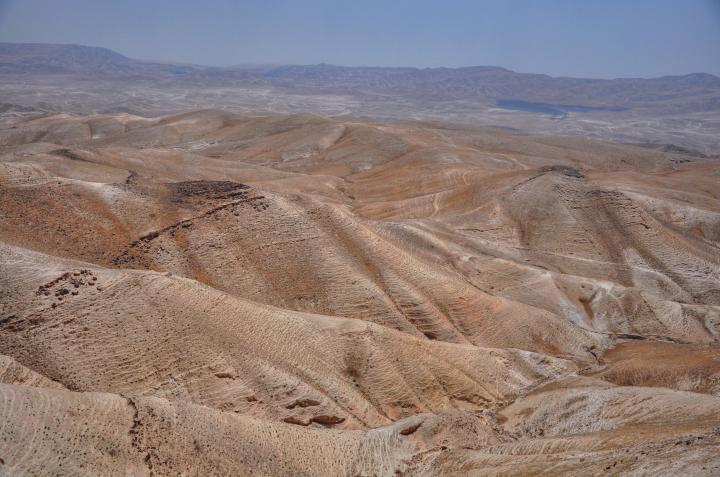 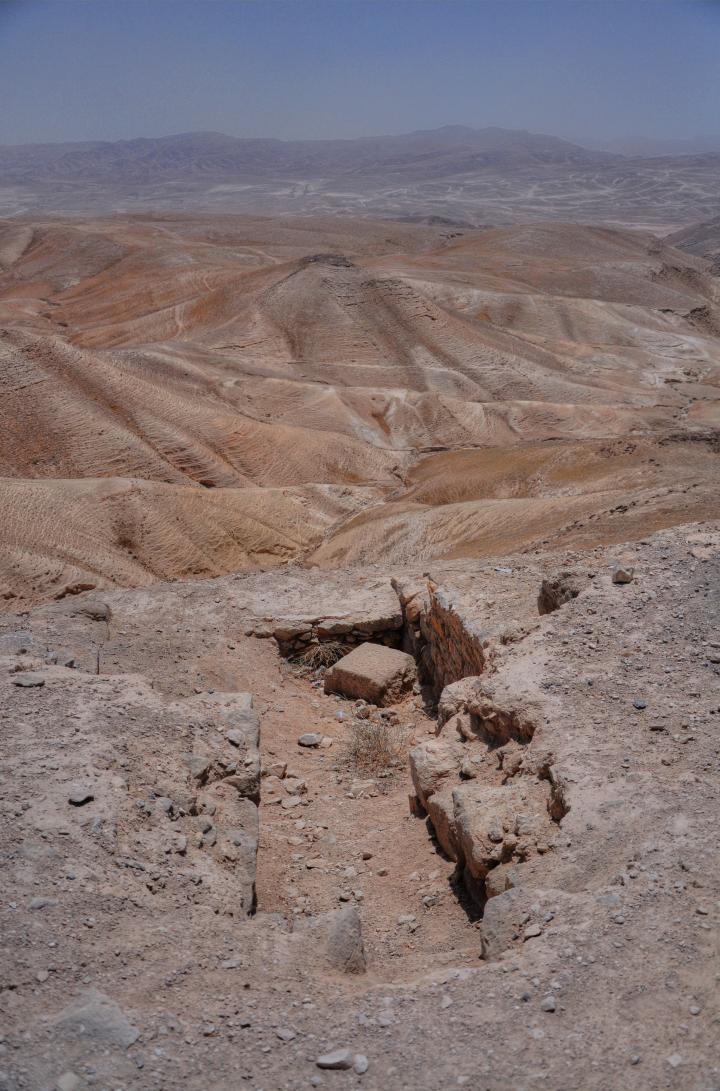 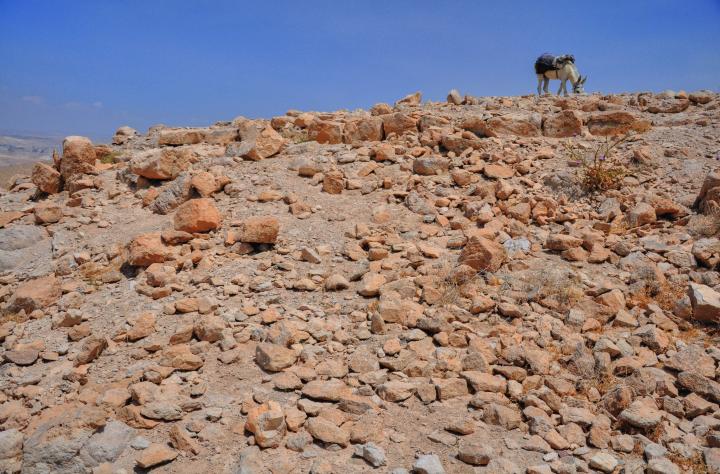 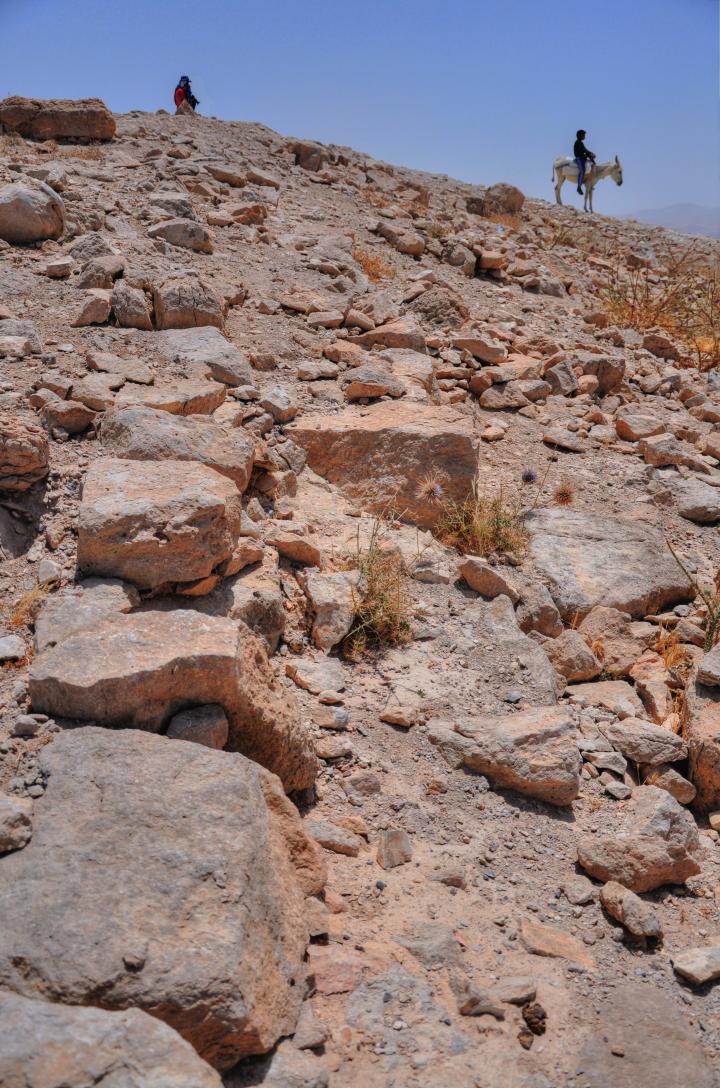 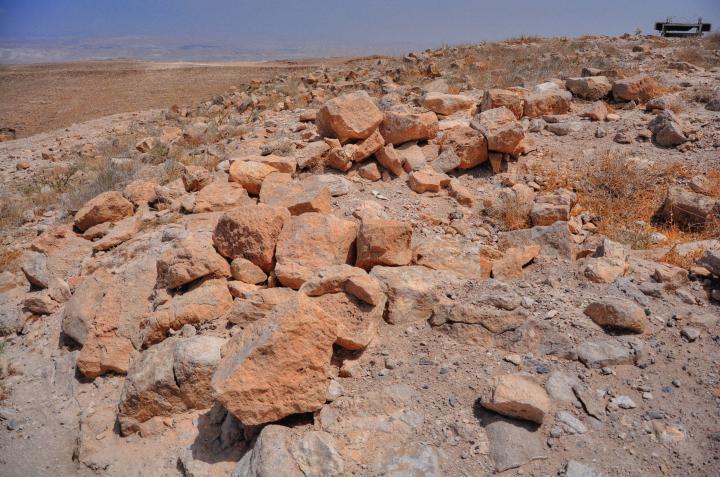 You can also see a southern view of the site with a special 3D picture. Click here to download the photo. Then, use the standard (red-cyan) 3D  glasses to view it.

Today, this rugged dirt road supports only 4×4 vehicles,  trucks or the Bedouin donkeys and camels. 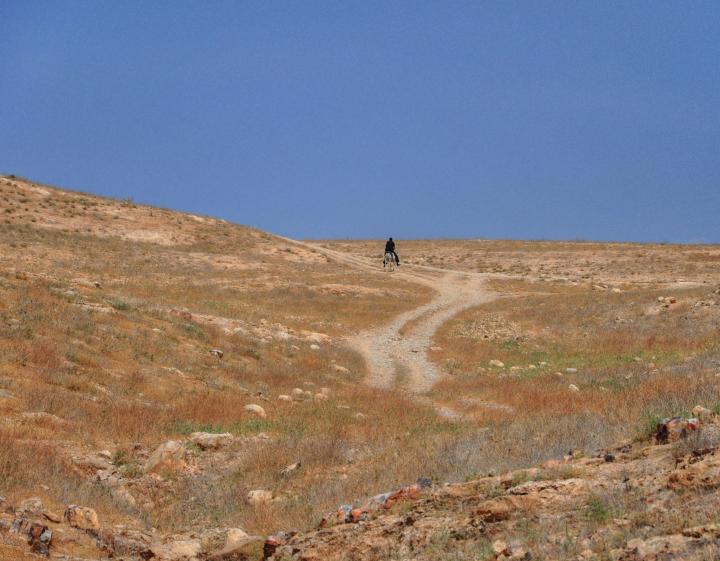 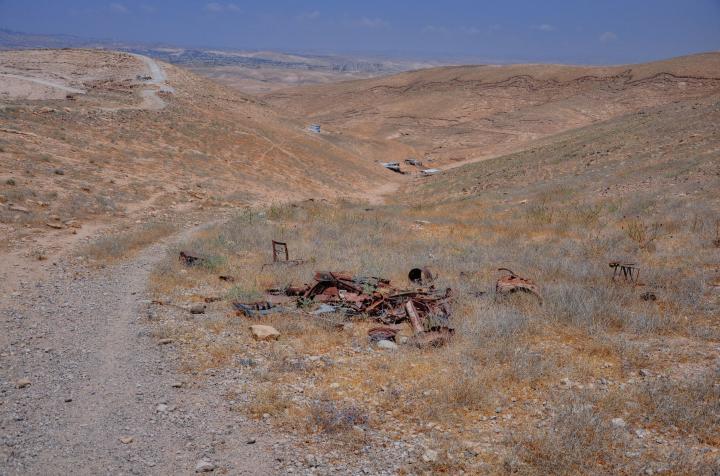 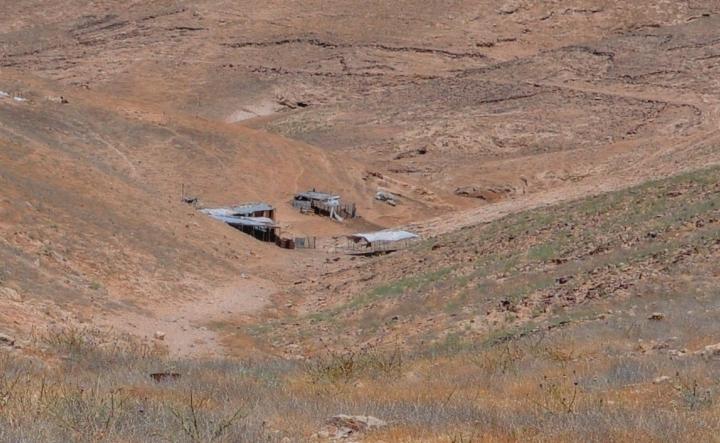 To reach the site, we traveled with an open Safari truck, which is equipped for driving in this rough terrain. There are several companies that offer desert tours, such as Haela-Tours. 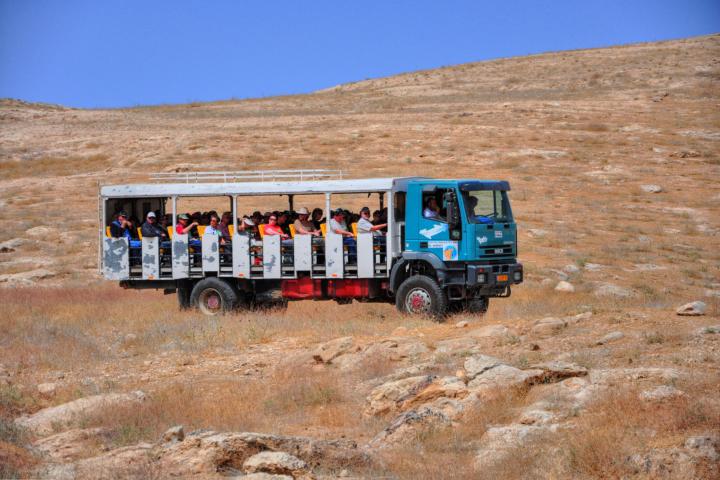 These verses describe the practice of sending a goat to the wilderness as a “scapegoat” during the time of atonement (Yom-Kippur).

“And he shall take the two goats, and present them before the LORD at the door of the tabernacle of the congregation. And Aaron shall cast lots upon the two goats; one lot for the LORD, and the other lot for the scapegoat. And Aaron shall bring the goat upon which the LORD’s lot fell, and offer him for a sin offering. But the goat, on which the lot fell to be the scapegoat, shall be presented alive before the LORD, to make an atonement with him, and to let him go for a scapegoat into the wilderness.”

“And the goat shall bear upon him all their iniquities unto a land not inhabited: and he shall let go the goat in the wilderness.” 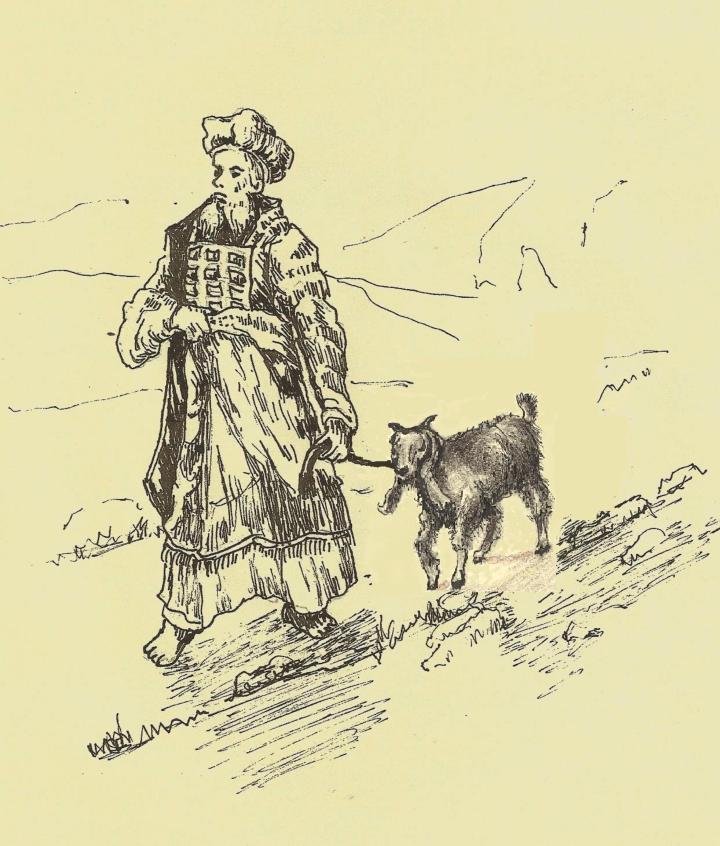 Drawing of scapegoat ceremony – By Rina