The west side of Nahal Zippori (Sepphoris stream) has several ancient sites, including a fortified biblical city and agriculture villages.

The Zippori stream flows year round into the Kishon river. It starts from the springs near the ancient city of Sepphoris (Zippori), and winds down and westward in a valley between the hills of lower Galilee.

Close to the plains of the bay of Haifa, where the stream flows into the Kishon river, there are a number of ancient villages in the last 3 KM before the end of the valley, including a biblical city and satellite agriculture villages.

This page reviews the ancient sites in the western side  of the stream of Sepphoris (Zippori),  which flows into the Kishon river. For information on other sites in this area, you can look up West Nahal Zippori.

Joshua 19:24-25:“And the fifth lot came out for the tribe of the children of Asher according to their families. And their border was Helkath, and Khali, and Beten, and Achshaph” 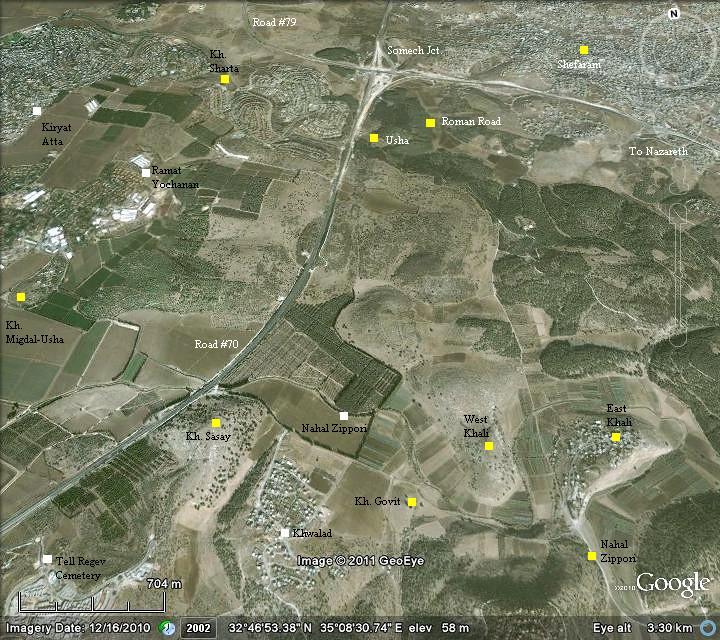 Along the stream there are many sites, starting from prehistoric times. See more information in West Nahal Zippori page.

The surveyors  (see reference below) have identified pottery and structure remains the following historic periods, listed in ascending order:

An aerial view from a quad copter flying above the Zippori stream on the west side is seen in the following photo. The modern village of Ras ‘Ali is in the far left background. Nahal Zippori loops around the Ras ‘Ali to the left, then back around to the right. On the left side is the hill where the ancient site of West-Khali is situated. 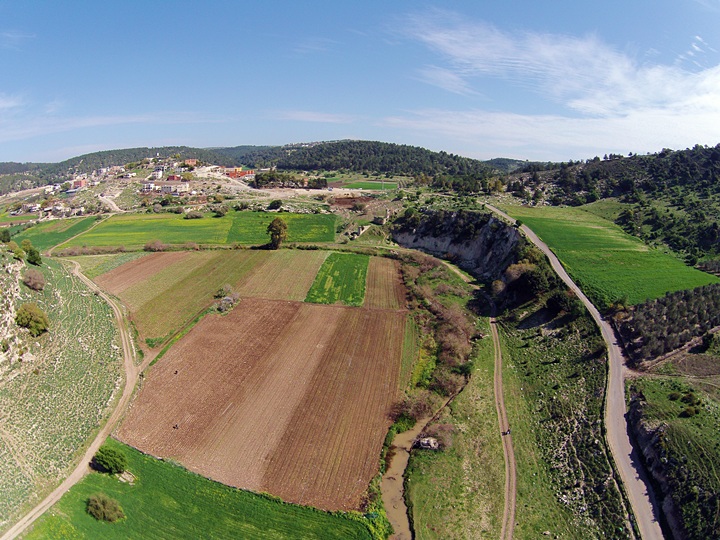 This round steep hill is completely surrounded by the stream. It is accessible only from the south, and thus was naturally protected – an important asset for a fortified city. On the hill, whose area is 5,000 sq M,  there are few remains except ancient pottery from Early Bronze to and Iron I (spanning 3150-1000BC) .

This site may be Khali – one of the cities that Joshua lists, since the pottery that was identified was from the Israelite period, which fits the biblical text and preserved the name. 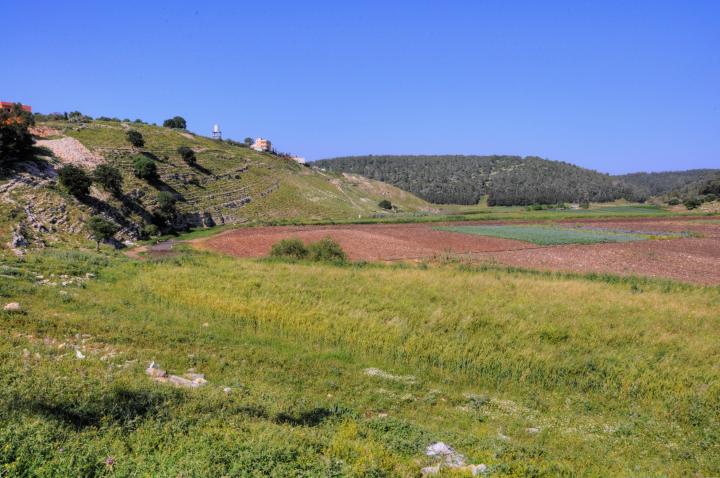 A closer look on the Tell: In the photo below you can see the small stream (the photo was taken at end of summer, hence the water levels are low). The stream winds around the Tell, creating a natural wet and muddy moat, another important asset for a fortified city. 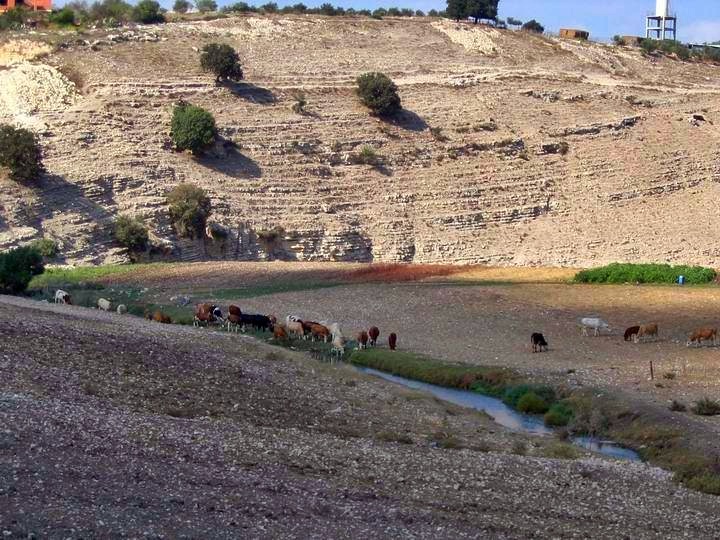 Today there are new buildings on the hill, a small village called Ras ‘Ali (Ras is top/head in Arabic, and Ali maybe is a part of the name Allil or Hali – preserving the biblical name). Its houses are seen below on the west side of the hill. 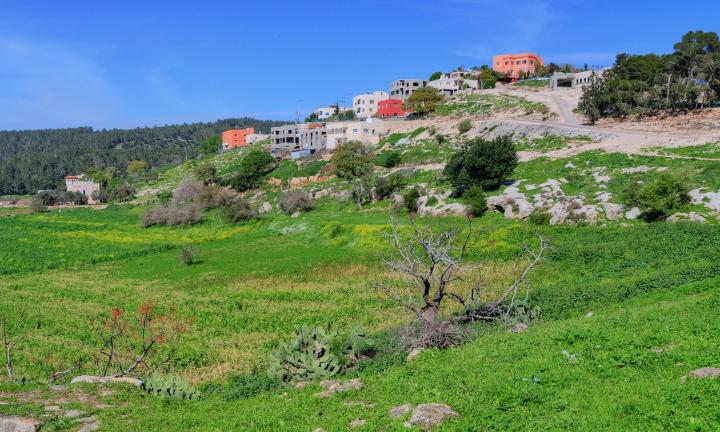 A panoramic view, as seen from the east side of Tell Alil, in seen in the following picture. This is where the stream loops around the hill, going north then west. A road passes on the right side, probably following the ancient road.

If you press on it, a panoramic viewer will pop up. Using this flash-based panoramic viewer,  you can move around and zoom in and out,  click on hot spots, and view the site in full screen mode.   Note that it may take minutes to upload.

This Tell (mound) is located in the entrance to the valley, west of Tell Allil (Khali). It is a round hill (133M height, 700 sq M). On the top of the hill is a flat terrace (size), which was the center of the fortified small city.  A casemate wall surrounded the top of the fortified city dated, according to the survey, to the Iron Age II (Late Israelite period, 950-586 BC). 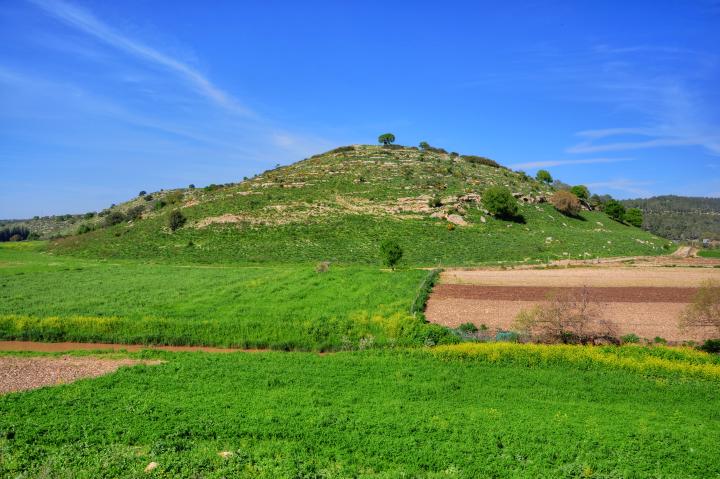 An aerial view from the south side is seen in the next photo, using a quad copter to fly above the stream. 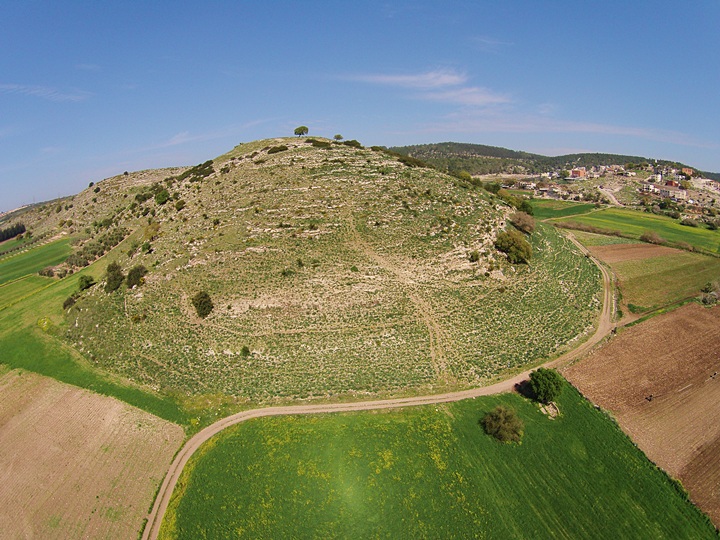 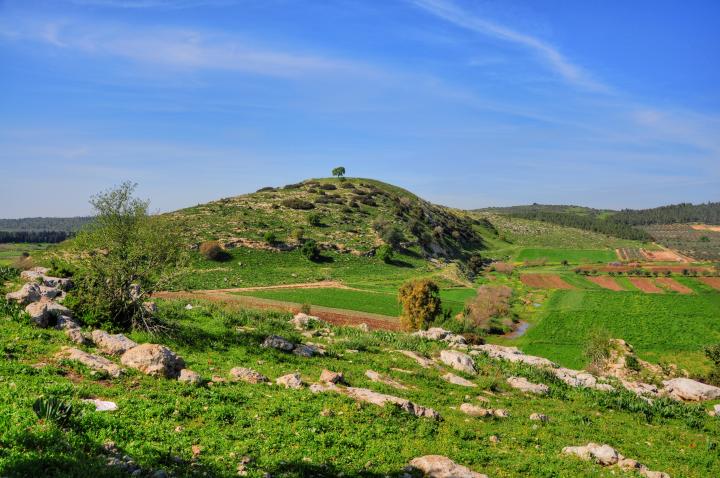 According to the survey, this site was settled from the Middle & Late Israelite (Iron II) period (950-586BC) , Babylonian/Persian and up to the Roman period (until 324AD). It is called “West Khali”, since the east Khali hill is another (earlier) ancient site from the Bronze age. 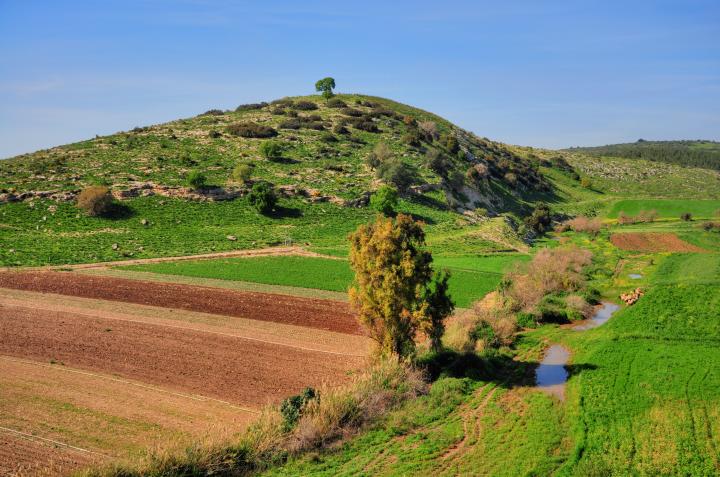 Khirbet  Govit was one of the agriculture villages that were under the protection of the fortified city (Tell Allil or West Khali). It is located in the valley south west of Tell West Khali, and was a small farming village (300o sqM), located on the road to the west. The pottery in this site is from the late Israelite and Persian period.

Below is a view from the north. In the far background, high above the valley, is the new settlement of Nofit (Pi-Ner), which is a large residential neighborhood (established 1984). 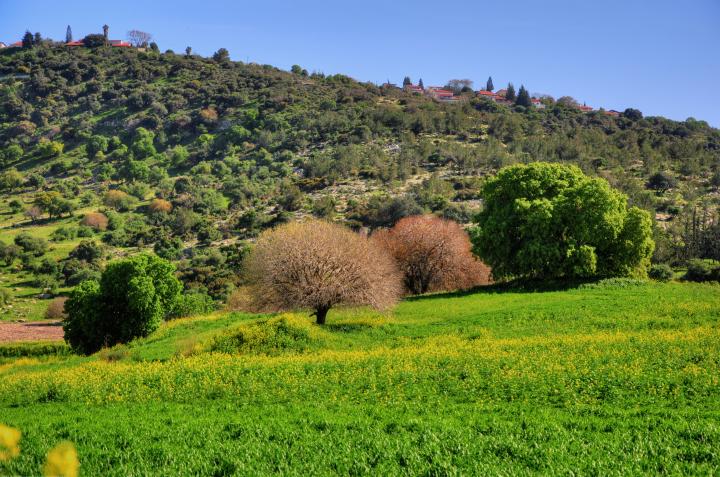 The following photo is a view from the air, using a quad copter. The view is from the northeast side. 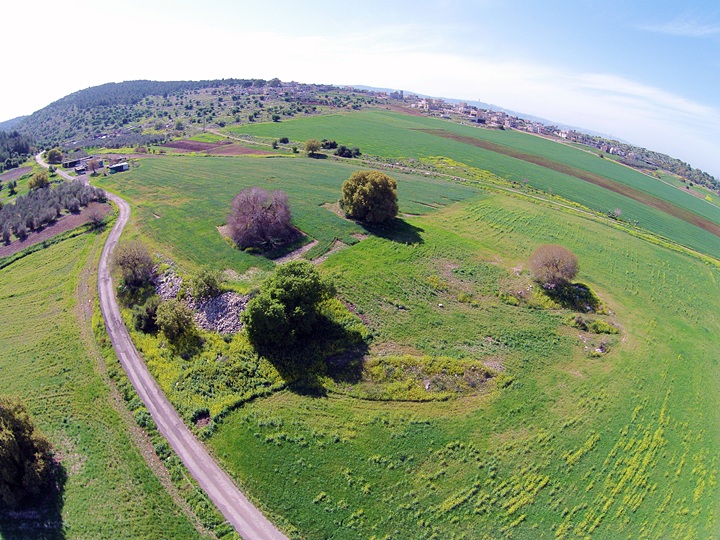 On the western edge of the valley, close to the highway, is the ancient ruins of Khirbet Sasay (or Sasey). It is seen here only in the far background. This site, located at 70M height, was from the Hellenistic, Roman, Byzantine and Ottoman periods.

On top of the hill are the remains of  an Ottoman road hotel (Khan), consisting of rooms around a courtyard. On the east side of the structure is a Muslim cemetery. 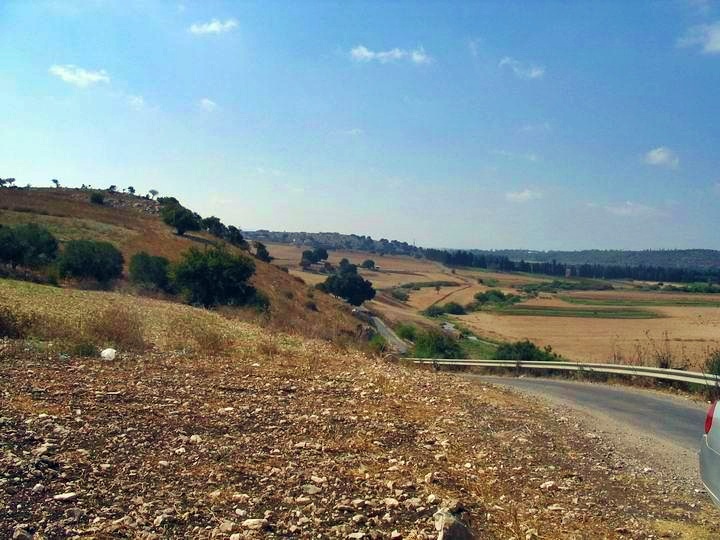 Another view from the west. The site is seen above the trees. In the background – the new settlement of Nofit (once called Pi-Ner). On the left background is the West Khali site and the entrance to the Zippori valley. 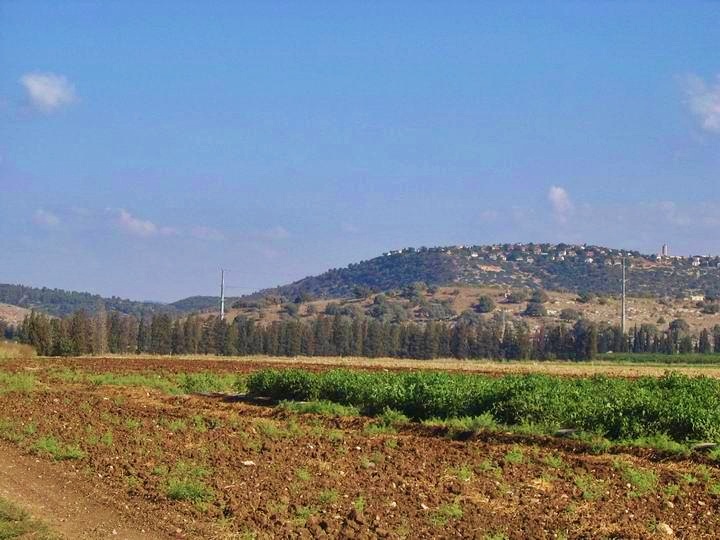 On the western side of the highway, 2KM from Khirbet Sasey and 0.5 KM south of Kibbutz Ramat Yochanan, is another Roman/Byzantine site, called Khirbet Migdal-Usha. It was was inhabited also in later periods (Crusader, Mameluk and Ottoman periods). As in Khirbet Sasey, the site was also a road side hotel. A new Khan (hotel) was built (10x20xM) in the Ottoman periods and stands today on top of the site. Around the site, on the hill side, there are ruins and many rock-cut cisterns and tombs. 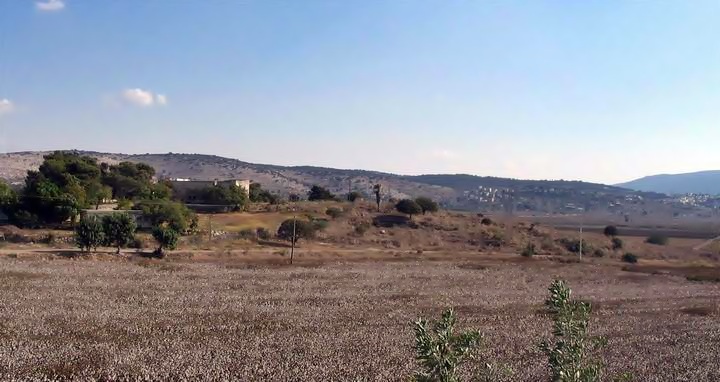 To watch a video clip, captured by a quad-copter above Kh. Govit, see it on Youtube.

This text, describing the land of the tribe of Asher,  may relate to Tell Allil (Khali):

“And the fifth lot came out for the tribe of the children of Asher according to their families. And their border was Helkath, and Khali, and Beten, and Achshaph”