Tell Par was a Biblical village. It belonged to the Asher tribe, but its identification is not certain. The site was continued in the nearby site of Kh. Ibtin. It may be “Beten” from the book of Joshua.

Tell Par (El Far) is a small (900 square meters)  round mound, located in the plains west of Ibtin. It was inhabited in the middle Bronze period (2200-1550BC), Israelite (Iron) and Babylonian/Persian periods (586-332BC).  The site was suggested as the Biblical ‘Beten’, part of the region of Asher.

Khirbet Ibtin is located east of Tell Par, and was probably the continuation of the older site.

The Tell is located near Ibtin, on the north-west side of the junction of the modern roads (Yagur-Somech and the road to Kiryat Atta).

The ancient Via-Maris road passed at this site for thousands of years. Tell Par was located on the main north-south road from Syria, through Acre, down to the center of Israel and Egypt. A Roman milestone was found nearby. Note that Via-Maris  split to 2 forks in Khirbet Gedura (near Kefar Bialik), and this section was the eastern route that passed through Kiryat Atta to Tell Regev.

Tell Par site got its waters from the Zippori creek which passes at this point, on its way south towards the Kishon river. The crossing over the creek was another advantage of the site.

The following aerial view shows the points of interest. As you can see, Tell Par is located north-west of the new road, and west of Kh. Ibtin. 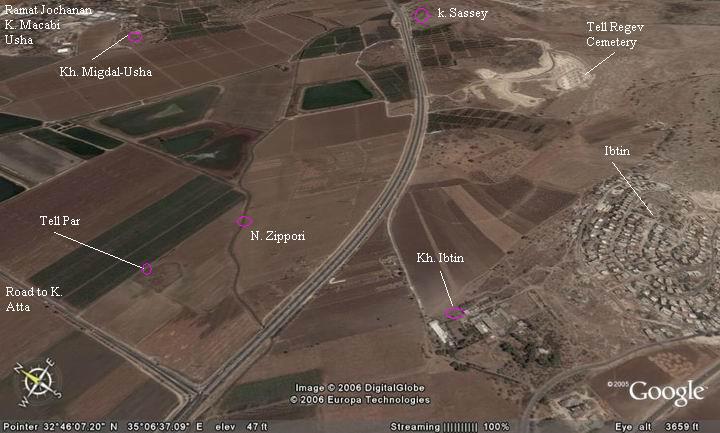 This ancient city was established in the middle Bronze (Canaanite) period (2200-1550BC), and according to the archaeological survey the site continued until the Babylonian/Persian period (586-332BC).

The site was identified as biblical “Beten” by Y. Aharoni and other scholars.

It might have been in one of the cities given to Hiram, King of Tyre, as part of the pact with King Solomon (Kings I). However, according to Y. Aharoni it remained under King Solomon’s area and was a border city with the Phoenicians.

In the Byzantine period the site was reused as a farming house. Today it is ruins and damaged from the farming around the site, and hardly noticed while driving at the nearby highway.

500M East to Tell Par, on the footsteps of the hills, there is a site from later periods (Roman, Byzantine, Mameluk and Ottomon period). This site may have been the second phase of Tell Par, which was too small for that period. The newer site may have also preserved the name of the ancient site – Beten, which is listed in Joshua as one of the cities in the region of the tribe of Asher.

At the end of the Ottoman period a large farm was built on the ruins of Khirbet Ibtin. A  Bedouin village was later  (1965) established on the higher side of the hill, incorporated into the Zvulun regional council. Today (2009) there are 2,500 residents in Ibtin.

The following photo shows the small Tell Par from the south.

It is hard to image a “city” in this tiny, low hill. However, this small mound is really the “tip of the iceberg”, since most of the Canaanite ruins are located deep under the ground around the site. 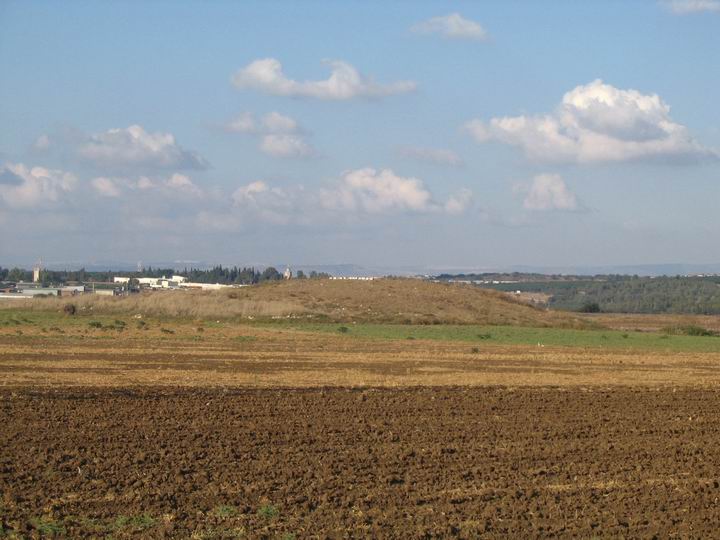 The newer site (Khirbet Ibtin) is spread over a larger area.  The following photo shows the south side, inside a olive tree orchid. To the north of the ancient village there are quarries, rock cut tombs, and stone covered tombs. On the north side there are agriculture terraces.  On the west  and south slopes of the site there are cisterns and oil/wine presses. According to the survey, the site existed from the Roman to the Ottoman period. 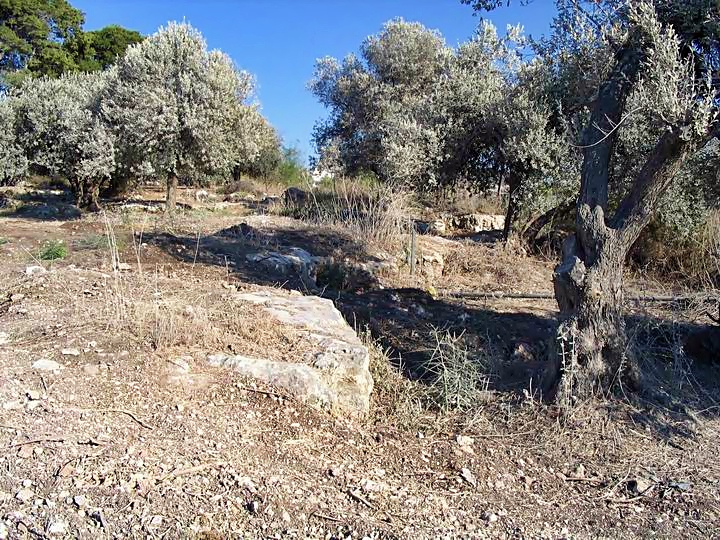 A view from the west. The ancient site is in the center on the lower foothills. The new Bedouin village of Ibtin is on the higher slopes. The bushes in the foreground mark the lowest section where the Zippori creek used to flow towards south, and today there is a modern highway that crosses this place. 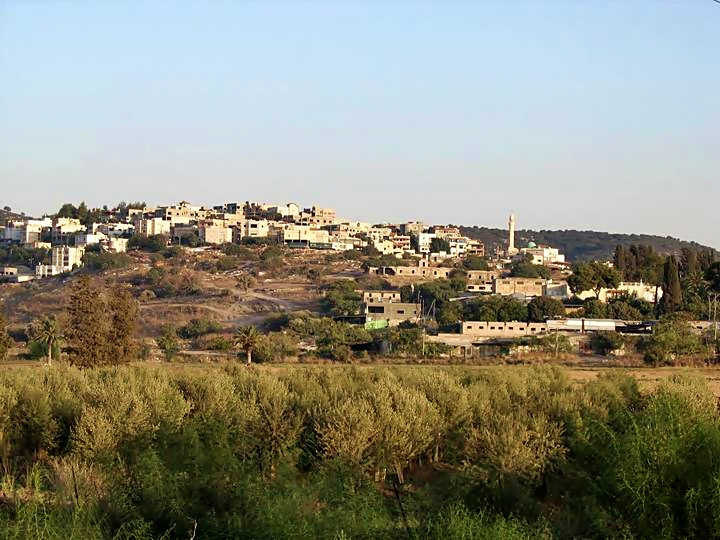 The Bedouin village of Ibtin is based on a private farm, which was built during the late Ottoman period by one of the richest businessmen – Hadj Tahar Karman.

This rich merchant started as a poor candy  peddler, worked with the Turkish army, and purchased land in the Zebulun valley and on the Carmel. He built a large modern farm complex on the western foothills of Ibtin, where his workers resided. During WW1 the Turkish Army used these structures as a base.  The ruins of these houses are seen in the photo below. 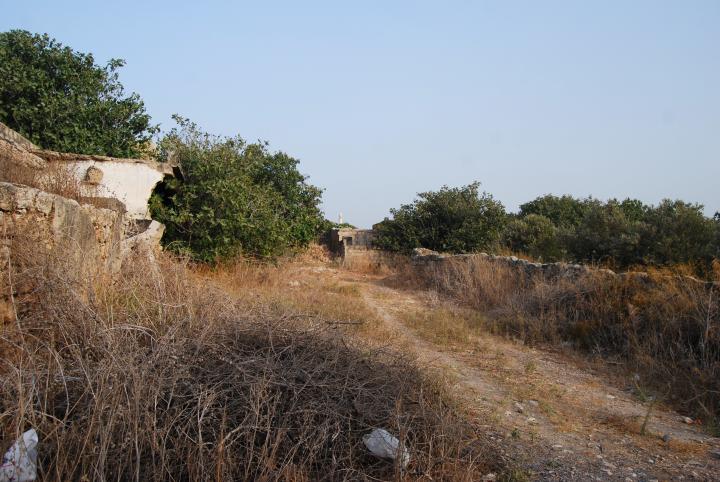 After the the retreat of the Ottoman army (1918), Tahar expanded his business. On this land he built factories that produced tobacco, tehina, flour and more.  The old flour factory, seen below, can be seen near the modern road. 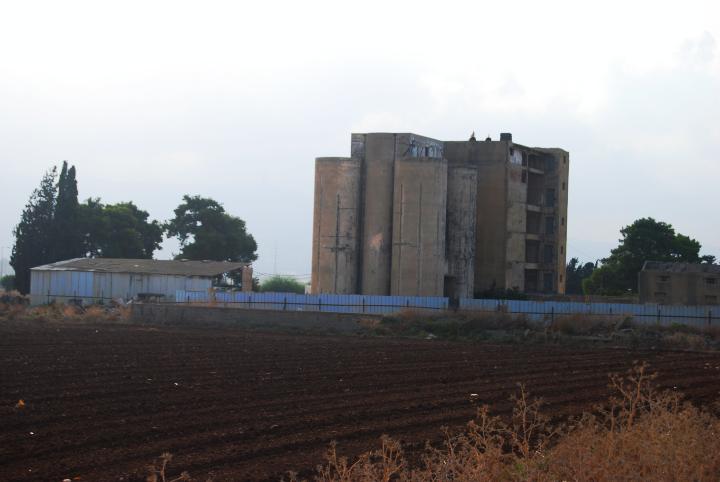 The factories gradually shut down, the farm complex declined, and most of its houses are in ruins. Recently (2009), the owner’s family started selling off some parcels of the farm and new tenants are now moving into some of the old houses.

This text, describing the land of the tribe of Asher, lists the cities in their area. One of the sites, Beten,  may relate to Par and Ibtin, since the latter (Ibtin) has a similar name and is listed near Khali which is 3 KM away.

“And the fifth lot came out for the tribe of the children of Asher according to their families. And their border was Helkath, and Khali, and Beten, and Achshaph And Alammelech, and Amad, and Misheal; and reacheth to Carmel westward, and to Shihorlibnath; And turneth toward the sunrising to Bethdagon, and reacheth to Zebulun, and to the valley of Jiphthahel toward the north side of Bethemek, and Neiel, and goeth out to Cabul on the left hand, And Hebron, and Rehob, and Hammon, and Kanah, even unto great Zidon; And then the coast turneth to Ramah, and to the strong city Tyre; and the coast turneth to Hosah; and the outgoings thereof are at the sea from the coast to Achzib: Ummah also, and Aphek, and Rehob: twenty and two cities with their villages”.

You can also learn about the story of a Tell in our info page.