There were several aqueducts constructed over the 2,000 years, running in different routes from Cabri springs to the thirsty city. The oldest line was constructed during the Hellenistic period, while the modern one – which is visible today in various stations along the route – was built 200 years ago and supplied the water until 1948.

The majority of the aqueduct was based on a raised open canal,  which was constructed above arches or above a raised sandstone mound. The water flowed down from the higher springs towards the city. The channel, about 0.5M wide and 0.8 deep, was coated with plaster.

In order to regulate the water flow, a series of siphon towers were built along the path of the aqueduct. The water from the aqueduct was raised up with the pressure of the incoming water, and stored in a pool. The waters then continued with the power of gravity to the next tower and finally to the water outlets in the city.

The internal tower pipes were based on round ceramic pipes. The underground pipes  were based on modular stone units that held the pressure of the water and were easy to replace.

The aqueduct can be seen in several sections between Cabri and Acre. The famous section is near Kibbutz Lochamei- Hagetaot, in the center of the aqueduct.  A rough plan of the Ottoman aqueduct is shown in the following photo, with indication of the featured sites. 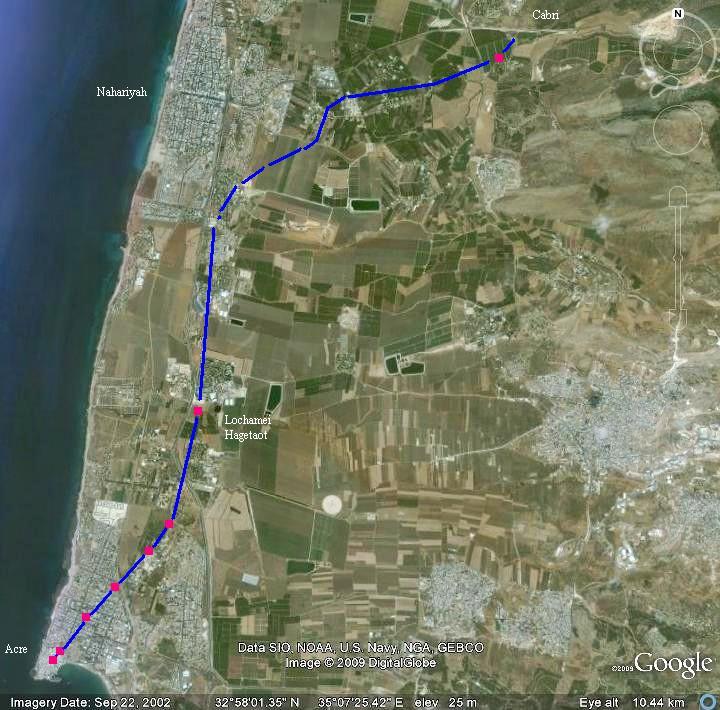 The main source of the aqueducts came from the springs in the  vicinity of the ruins of the Arab village of El-Cabri, south of the modern Kibbutz of Cabri. This village was built over older layers (Roman, Byzantine, Mameluke). 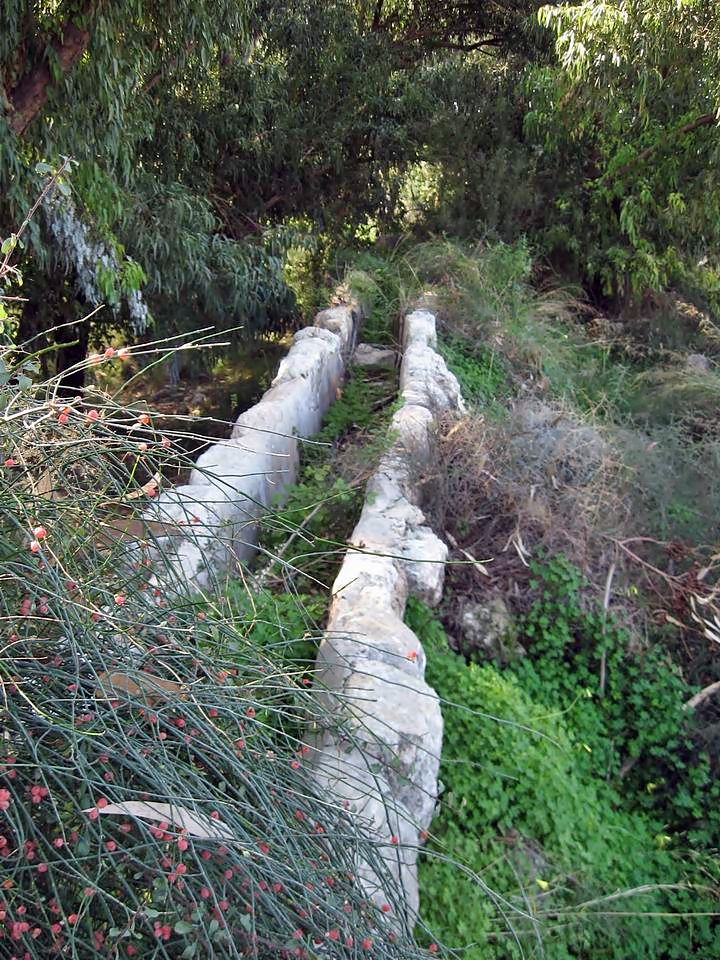 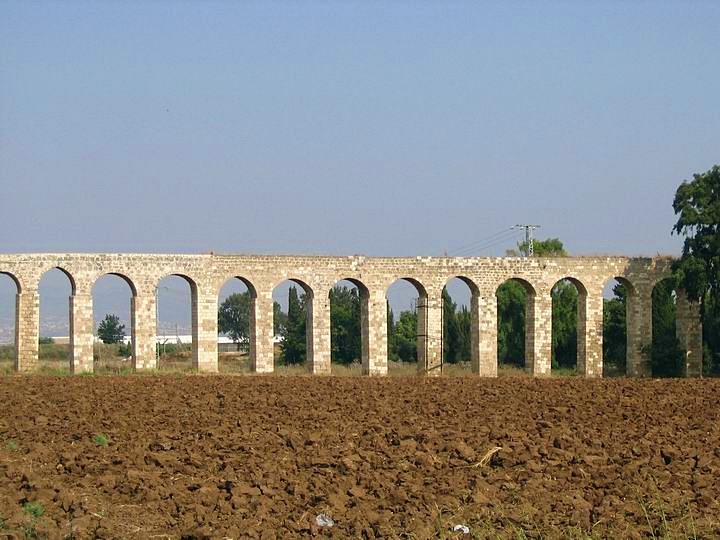 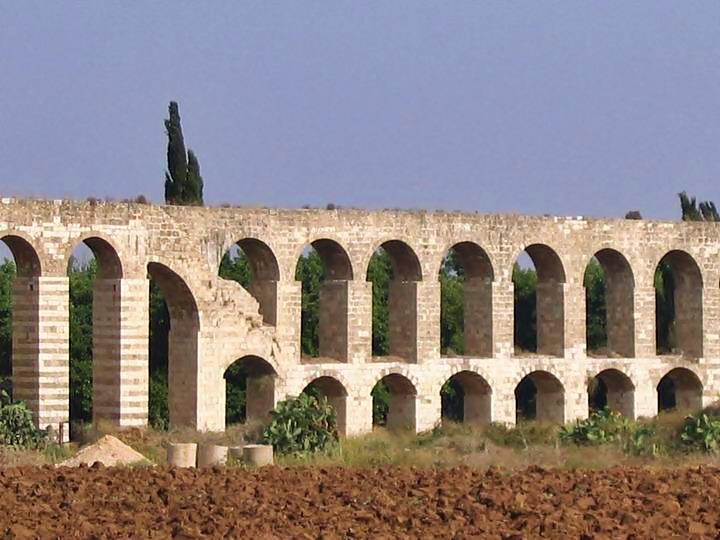 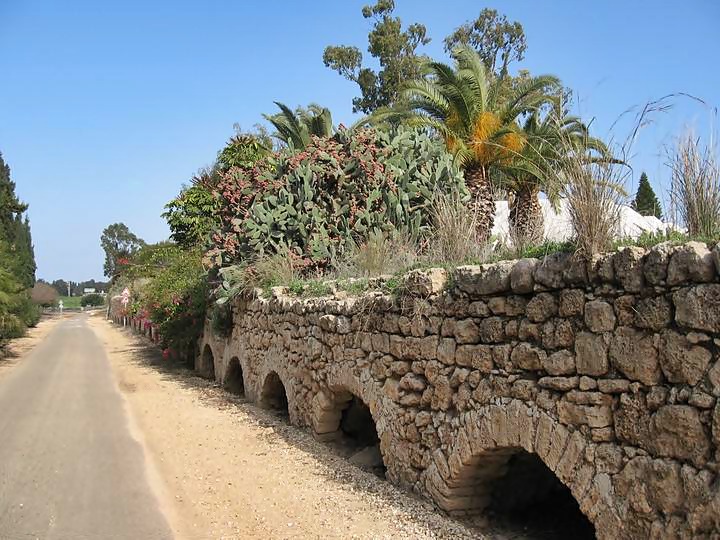 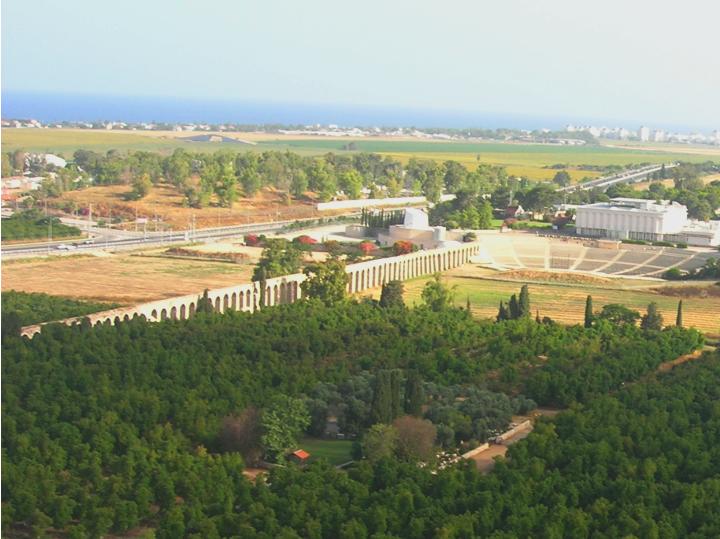 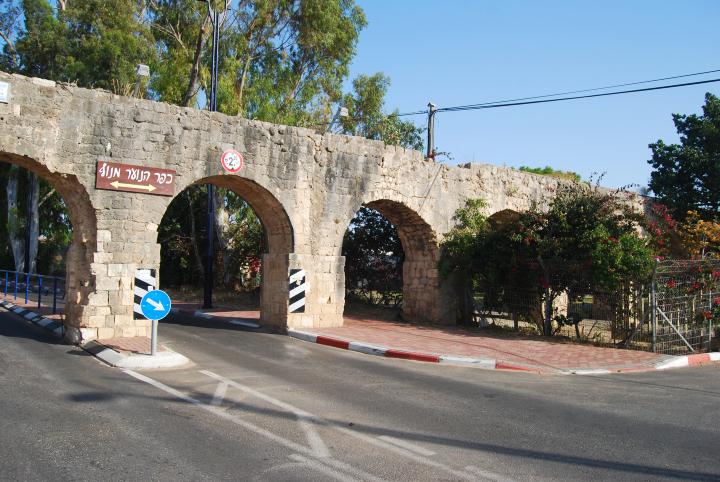 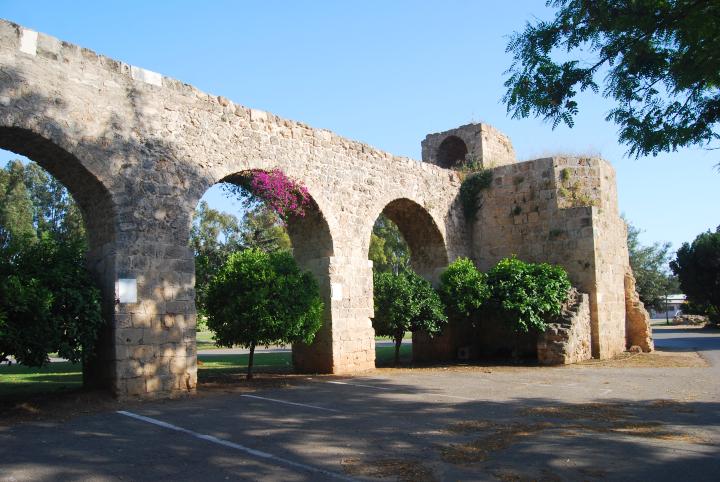 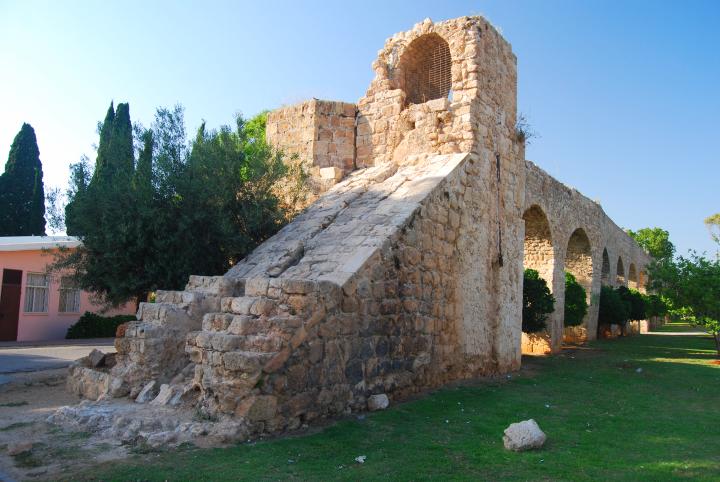 One of the modular stone units is seen below. The typical sizes were 60 x 35 x 35 cm. The “male” side is seen in the front, and this side fit into the “female” side of the next modular unit. Along the aqueduct it seems that all “males” were in the south orientation.

This unit is a corner stone; it has a vertical hole on the top – a hole where the vertical pipe connected to the horizontal system. 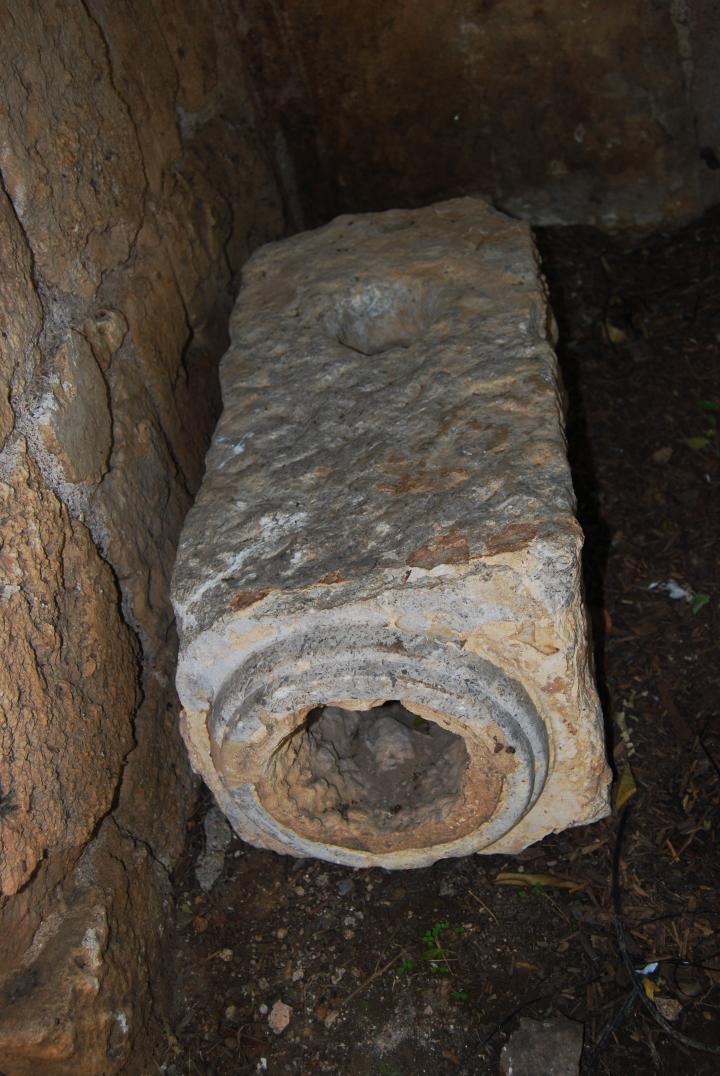 The pipes connected to the aqueduct through a pair of pipes which were constructed on a raised sandstone mound, and continued south to the next siphon tower. The pipes seen below are with the “female” side pointing to the north. 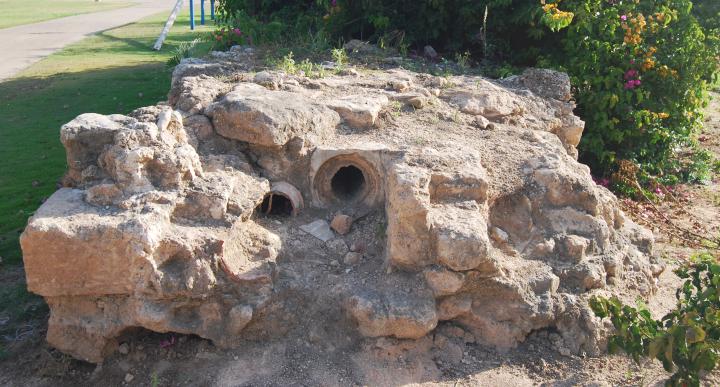 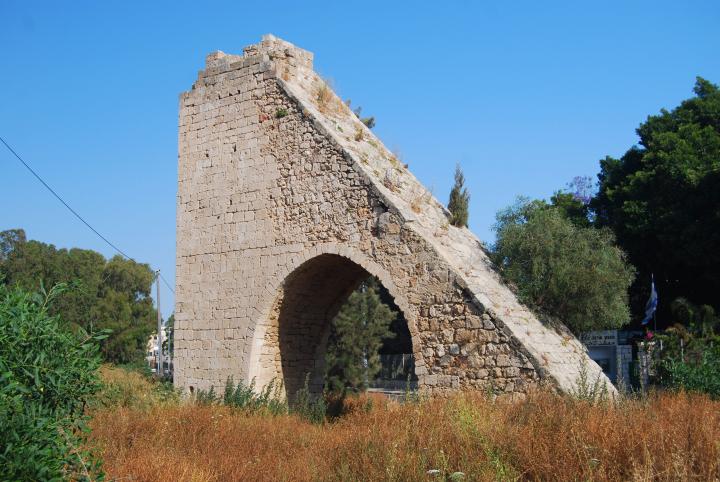 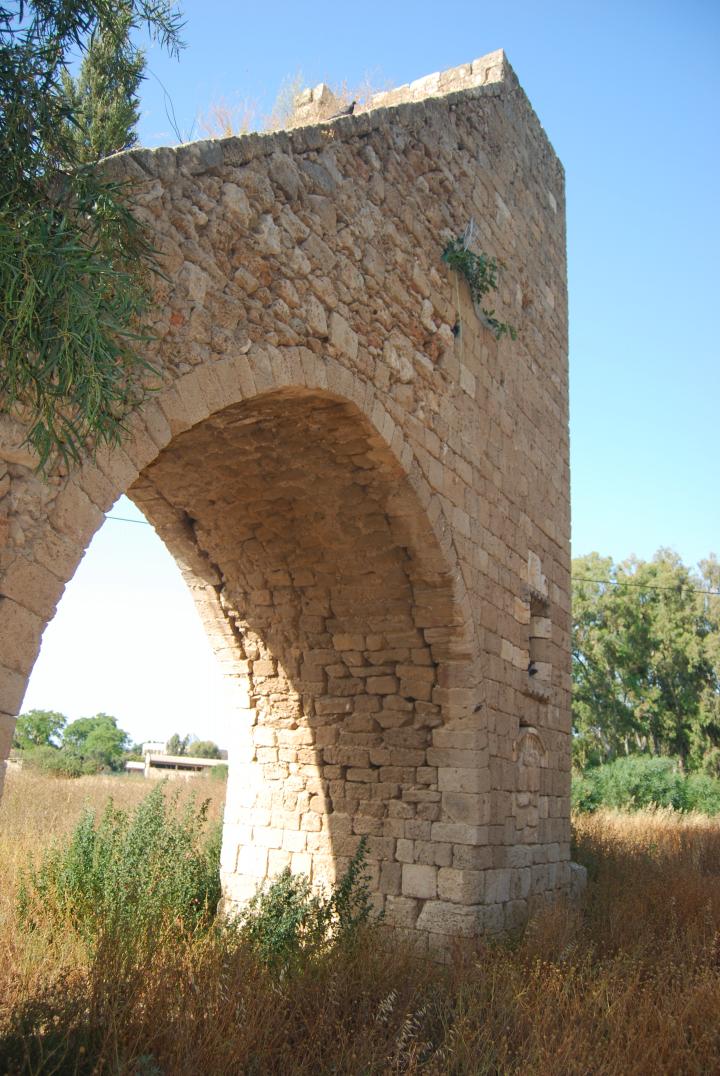 A detail of the modular stone unit is seen below, on the side pointing towards the city on the south. This side is the “male” side. 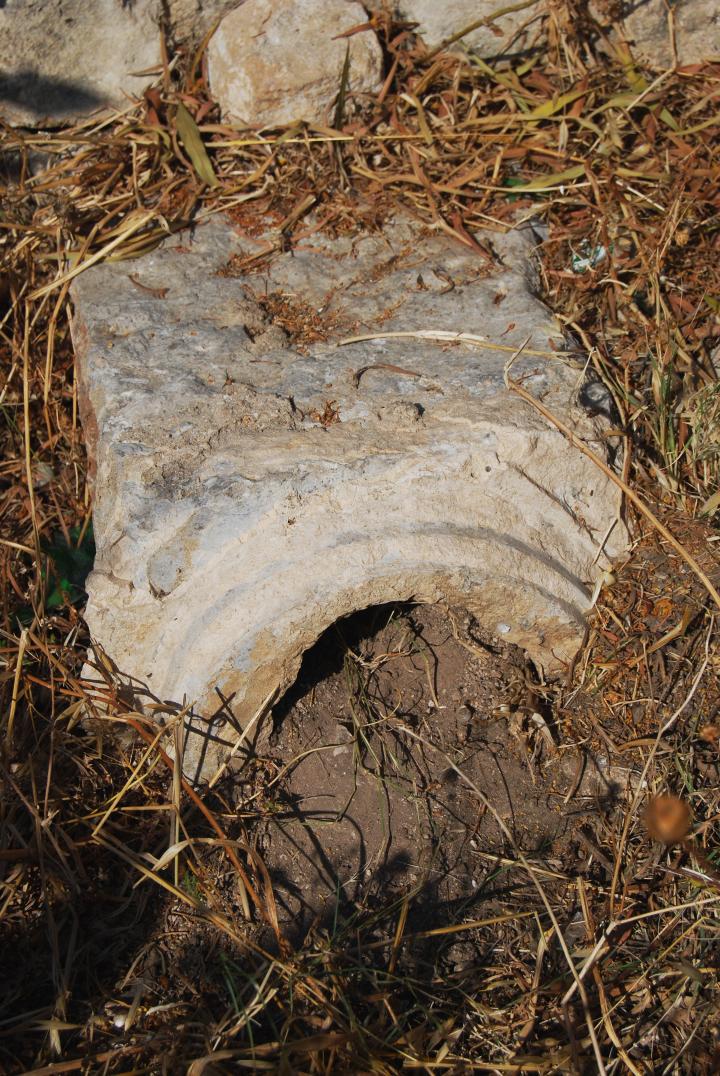 The photo below shows the siphon tower near the city’s north junction, in the Wolfson neighborhood, 490M south of the previous tower.  Inside the tower is a narrow cavity with stone notches, which enabled the maintenance crew to climb up the tower and clean it. 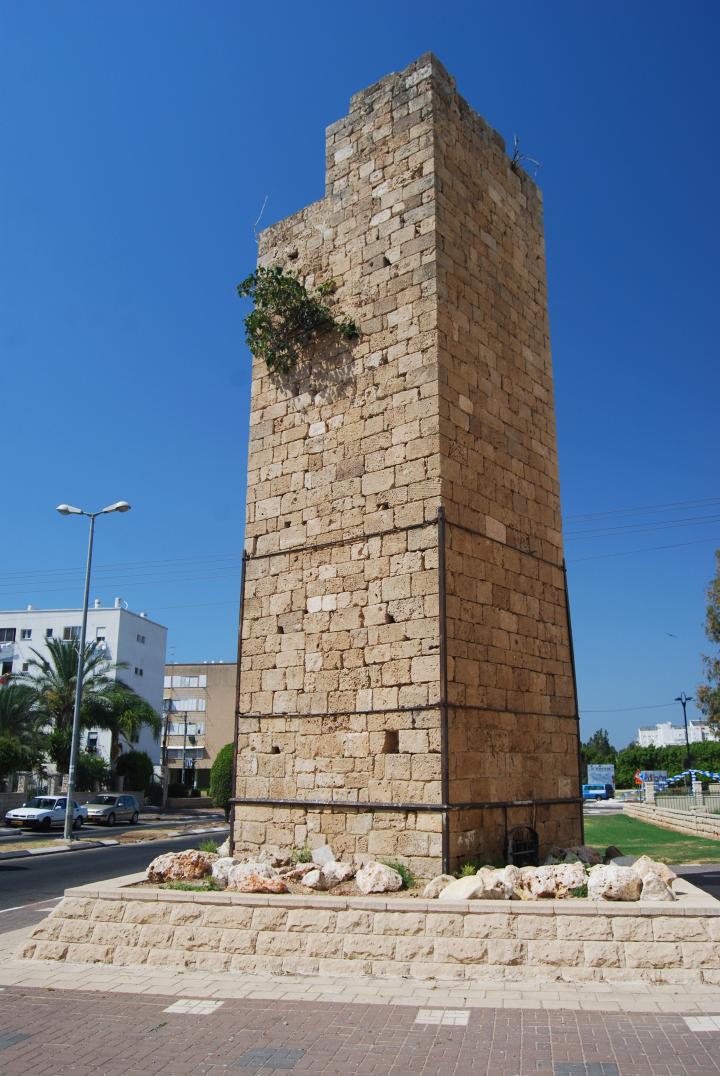 A closer detail on the northern section of the pipe is seen below. This is the “female” side. 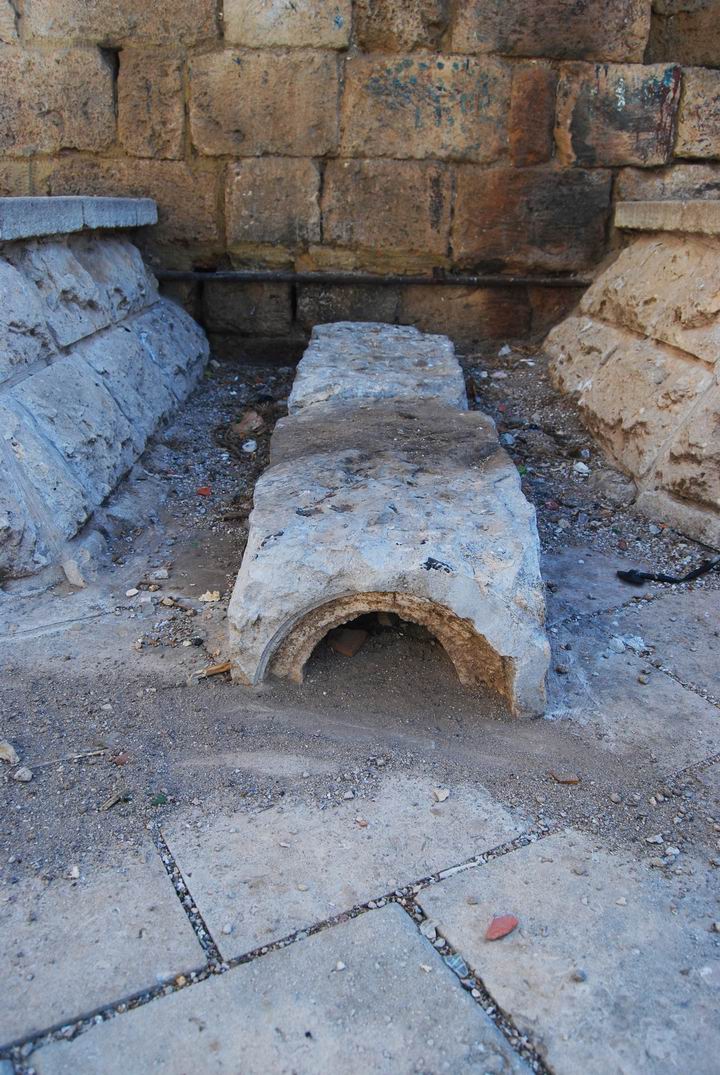 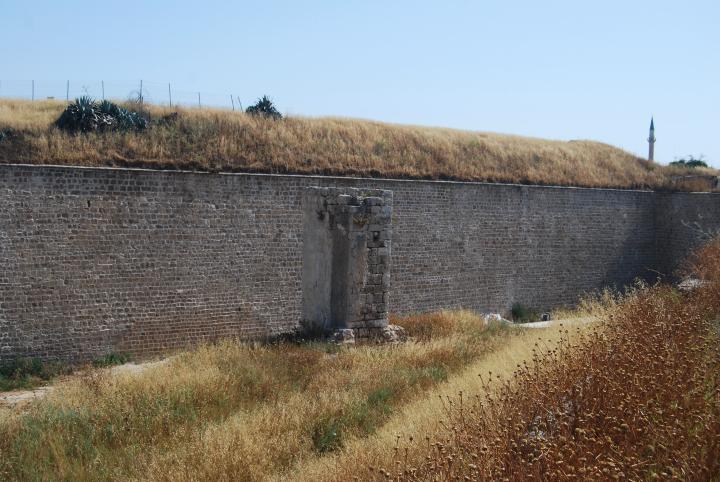 The photo below shows the other side of the walls – on a section of the northern inner moat. A sebil (water fountain) is seen embedded into the wall on the right side of the photo, which served as the source of drinking water for the soldiers who defended the city. 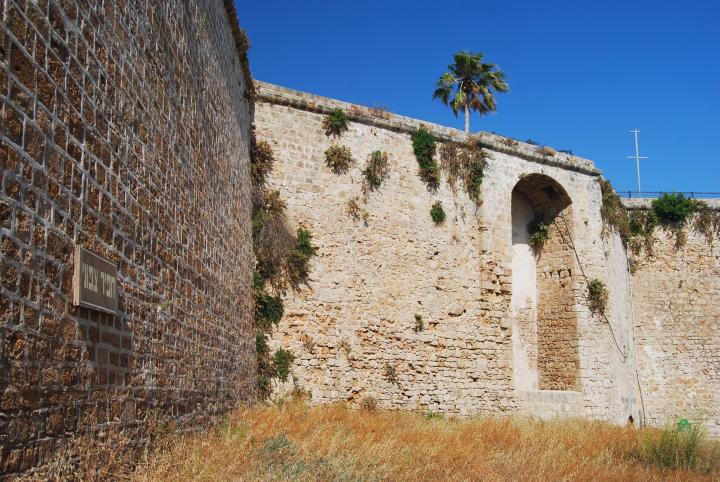 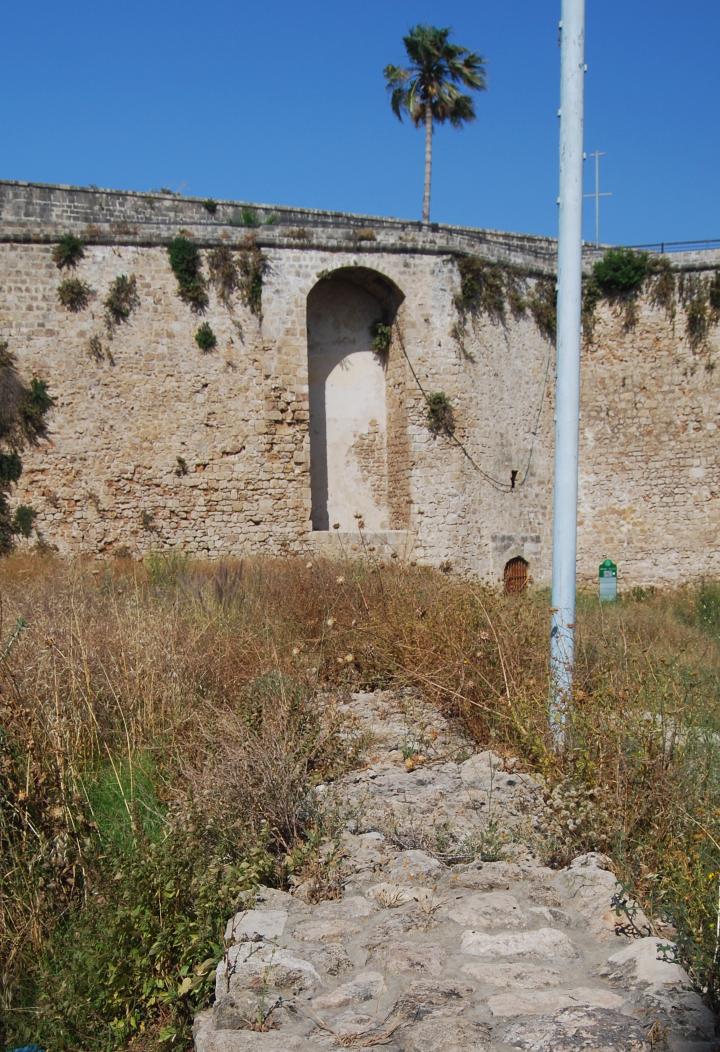 Note that the wall is damaged on the left side of the tower, as a result of a huge blast which went up on April 1, 1799. At that time the French army, under Napoleon’s command, attacked this section in order to penetrate the Ottoman town. Although the aqueduct suffered damage, the blast was too light to topple the tower, so the lucky defenders continued firing from this tower at full force, forcing the French to retreat. It was one of the few military defeats of Napoleon- he probably never forgot the aqueduct tower of Acre… 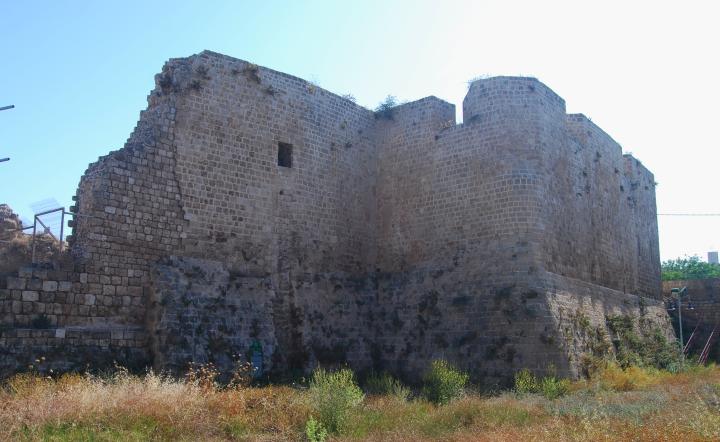 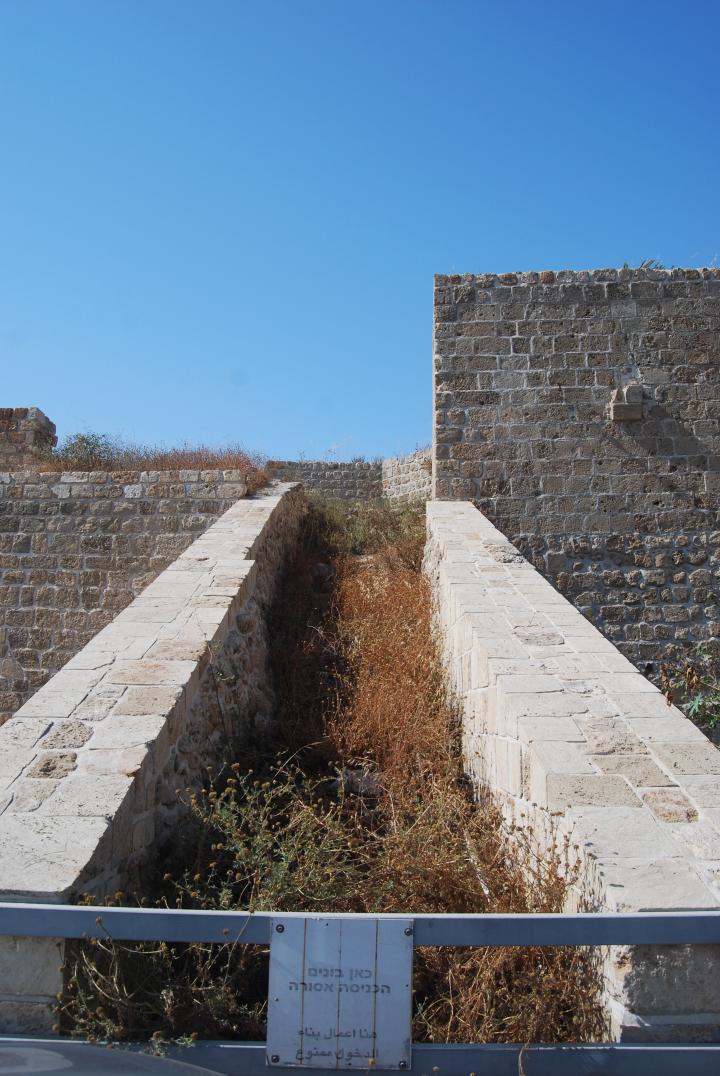 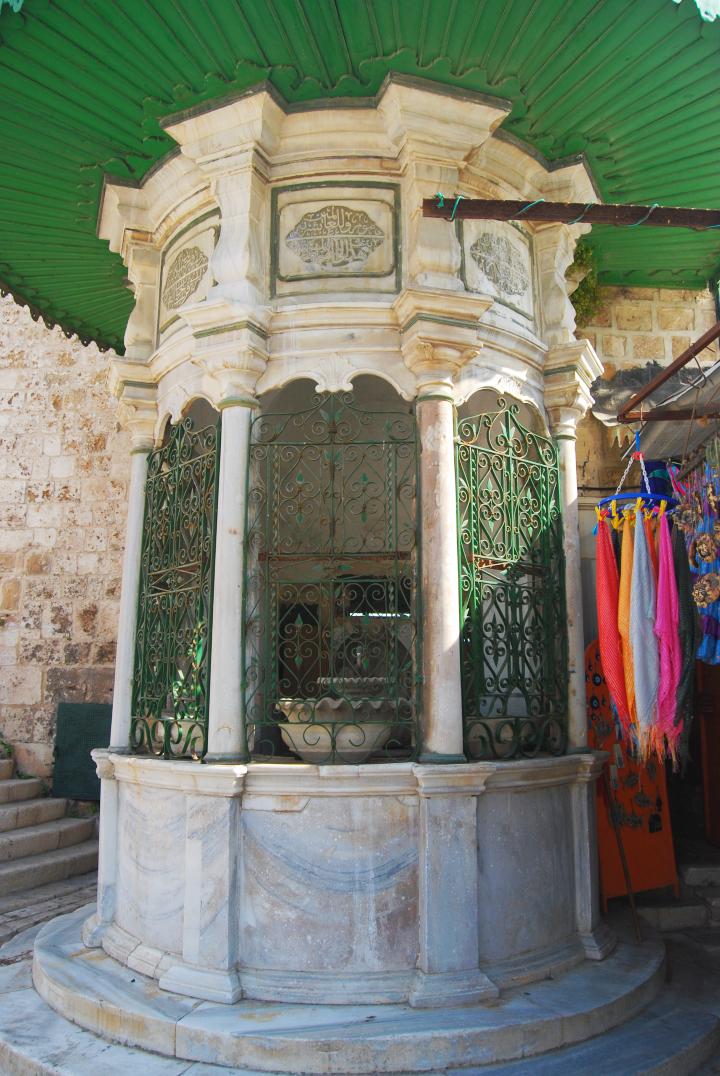 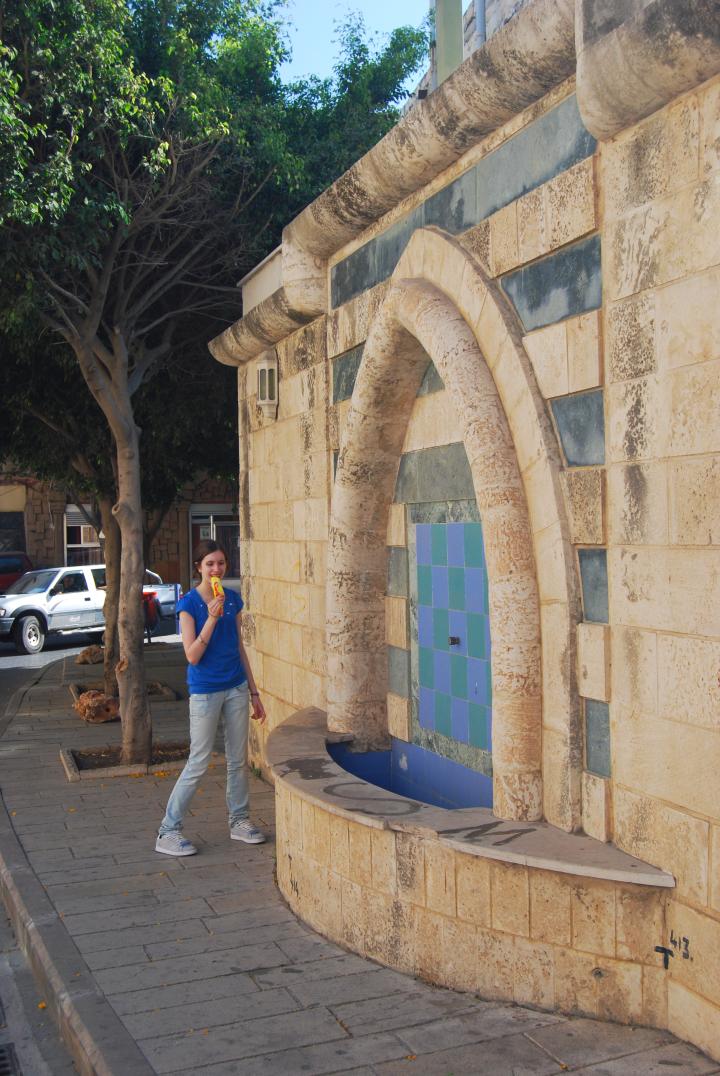