The 12th-13th Century Crusaders main fortress and headquarters, halls and structures on the North-West side of the city. 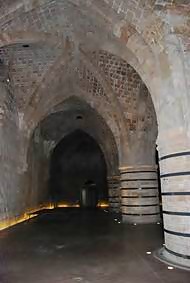 The Crusaders main fortress (castrum) and headquarters, halls and structures are located on the North-West side of the city. Excavations in recent years reconstructed many of the large structures which are located under and south to the Ottoman/British citadel. In this place was the Crusaders’ Royal palace and main headquarters  after retreating from Jerusalem.

During the 13th century this location was in the middle of the city, which was almost 3 times the current size, and its walls extended to the north.

These halls were built by the “Hospitallers” – the  order of the Knights of the Hospital of Saint John – in the beginning of the 12th Century, after the Crusaders captured the city in 1104 AD.

The Crusaders were driven out from Jerusalem by Saladin in 1187, and Acre also fell to Saladin’s forces. However, several years later Richard the Lion Heart headed a new Crusade and retook the city (1191),  and established the capital of the remnant of the Kingdom of Jerusalem. This was the Crusaders last stronghold in the Holy Land. They enforced and expanded their central fortress and palace on the site and ruled their smaller Kingdom from the Citadel. The city’s port enabled them to keep the vital supply line to Europe.

This lasted 100 years: In 1291 the city was taken by the Mamlukes, and was completely destroyed.

The history of the following years are described in the Citadel page.

The following photo shows the eastern entrance to the Knights Halls complex. The towering building, dated to the 17/18th Ottoman period, was built over the ruins of the Crusaders fortress. Walking straight through the gate brings you to the Great Hall (on the far left), the Halls 1-10 (on the far right), the courtyard (far center), and down the steps to the lower level (Prisoners hall). 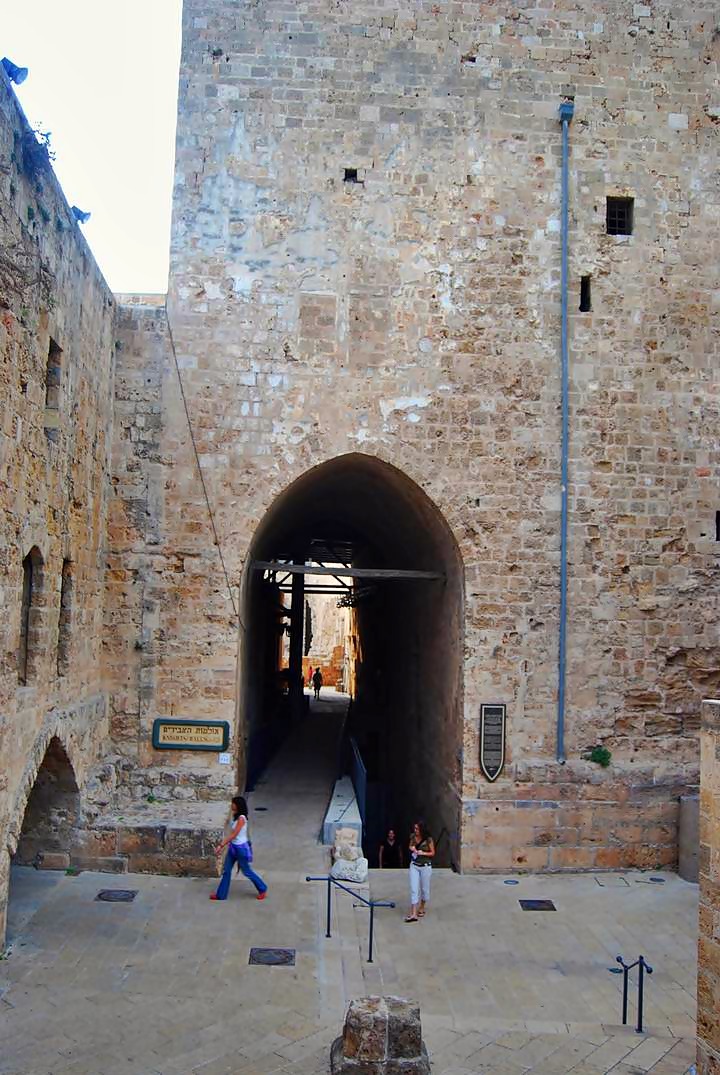 The great hall is the largest of the Knights hall (45 x 30M), and consists of 20 vaults and 15 columns with a square base. It was used as a hospital. Above the hall were additional 3-4 levels, but they are gone today. 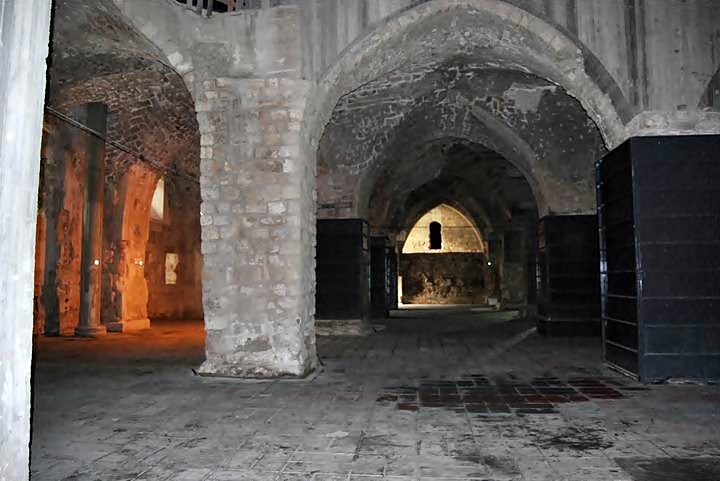 These are some of the art works left from the annual art & theater festival held in October in Acre. 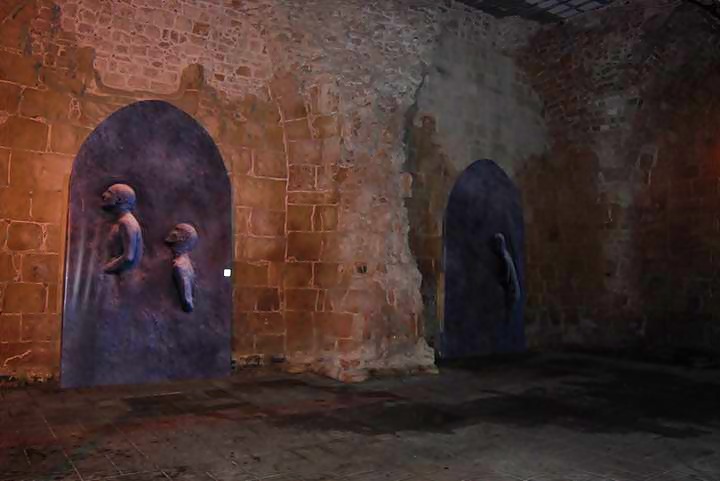 The Refectorium (Latin for “a place to restore”) is a term used in monasteries and refers to the dining room. 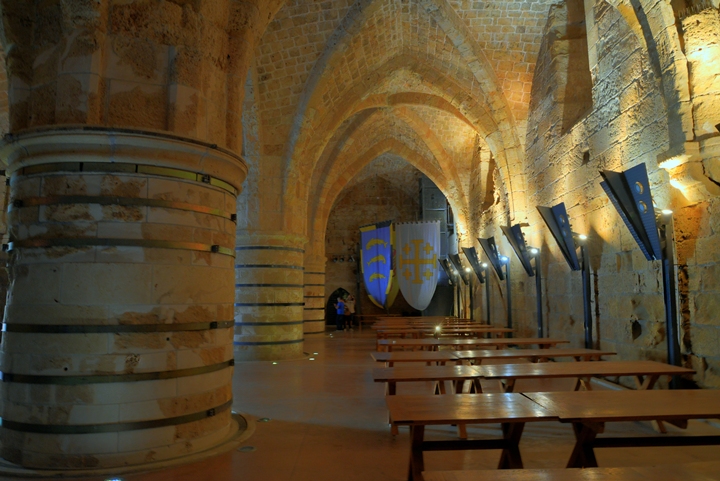 This impressive hall is composed of 8 vaults , 10M high, and is 450 square meters. It was constructed at the end of the Crusaders period, and it included a kitchen. 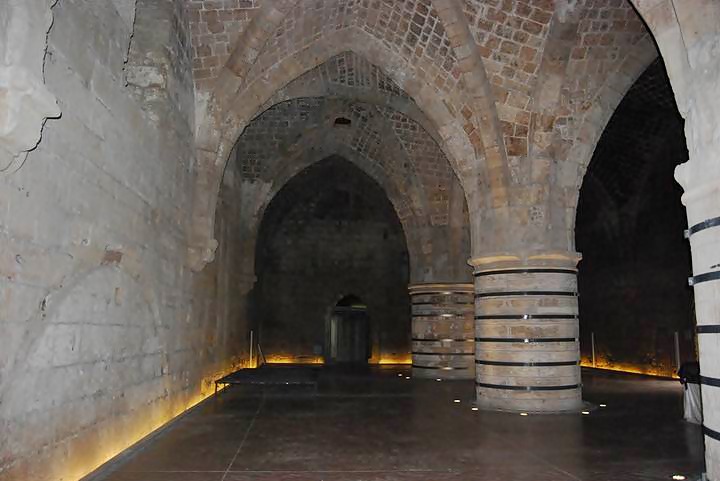 Another view of the dining room. It is entered from the court yard. 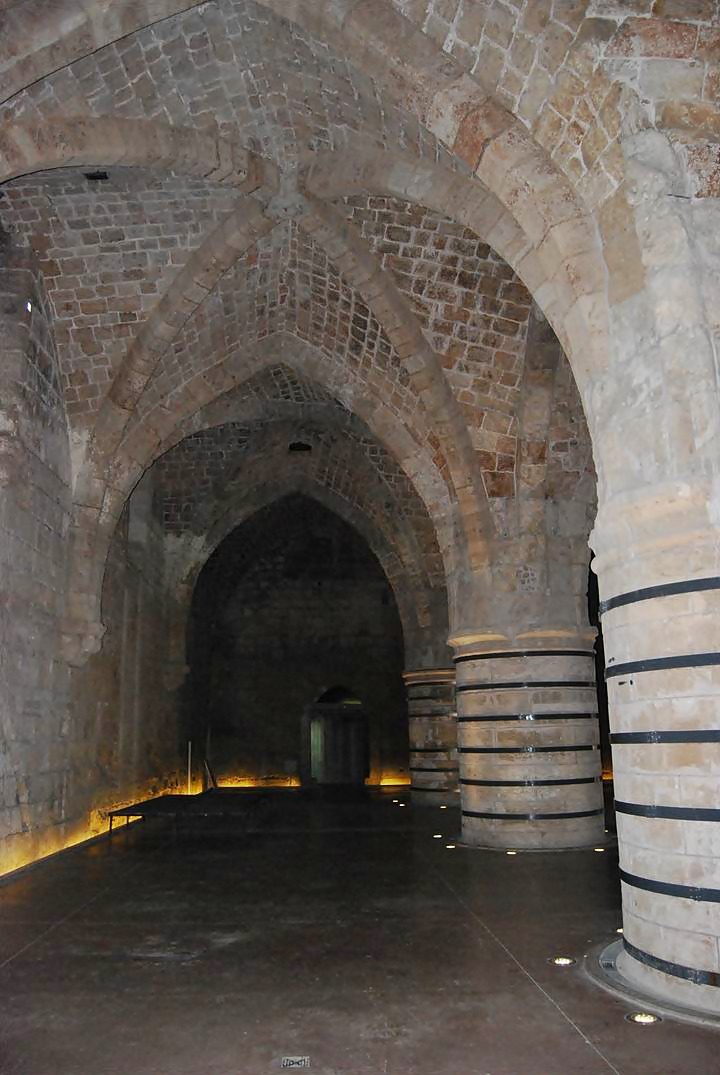 The Tunnel to the Crypt:

A narrow tunnel connected the dining hall to the “crypt” (Greek for hidden), an underground  room under  the church of St. John. This tunnel was used by the Crusaders in order to allow underground access between the fortress and hidden armory caches. Only one person can move thru the tunnel, so try to avoid two way traffic… 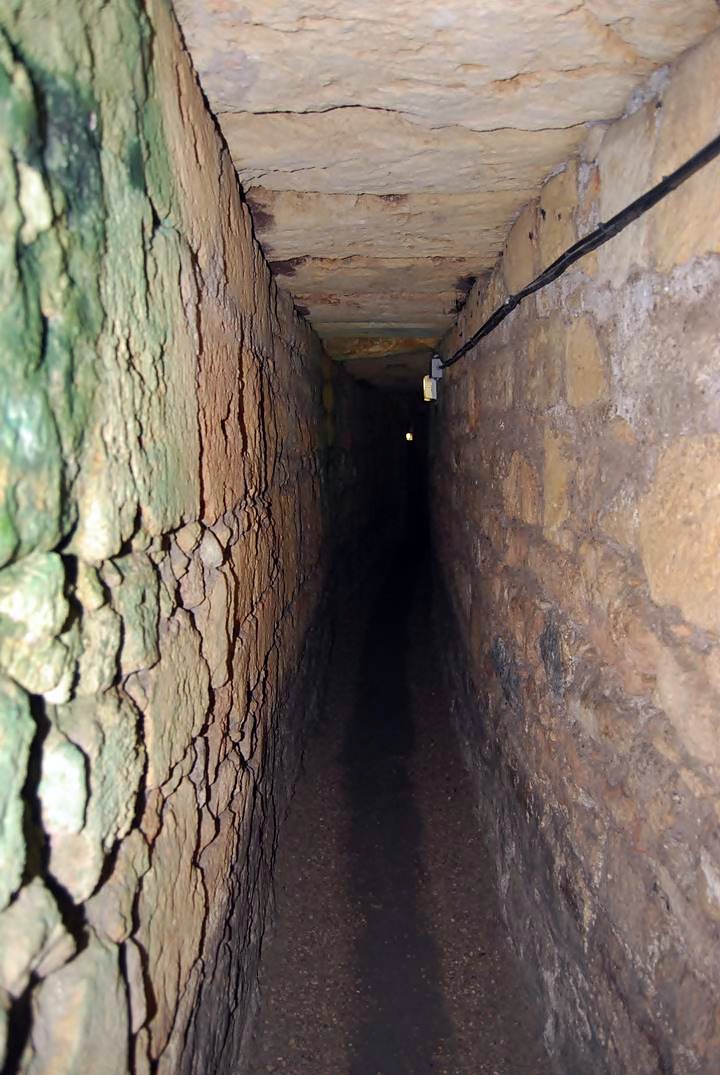 In the Crypt are a number of Crusaders tombstones on display. 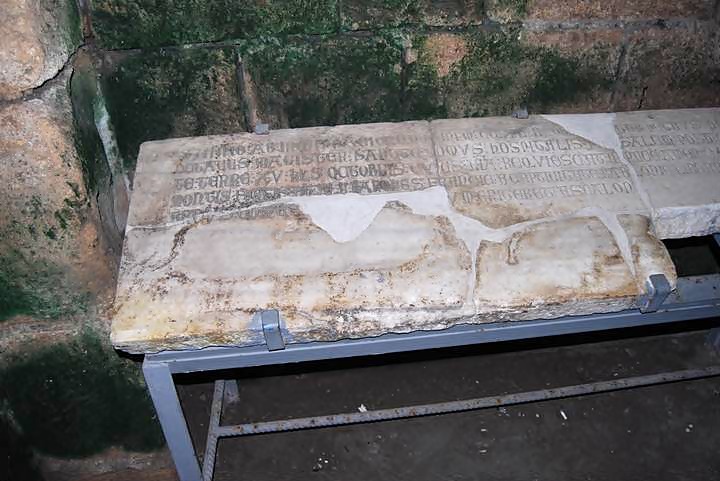 A Crusaders tombstone from 1290. 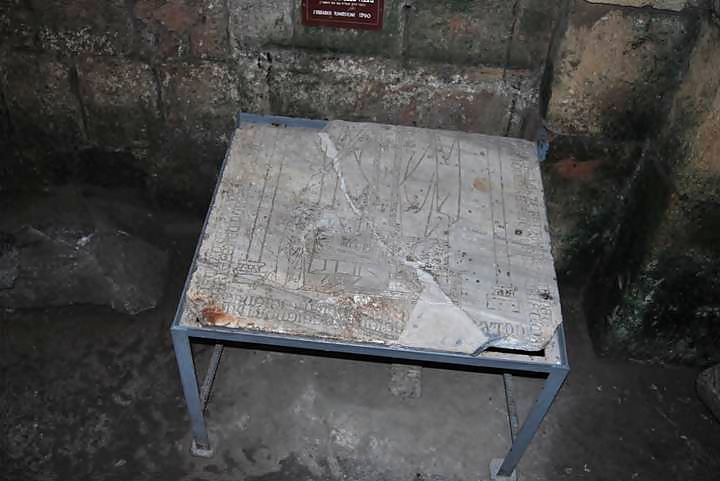 This is the main court yard of the fortress (1200 square meters). The following photo shows a view towards the south, with the entrance to the “Refectorium” (Crusaders dining hall) on the lower level. 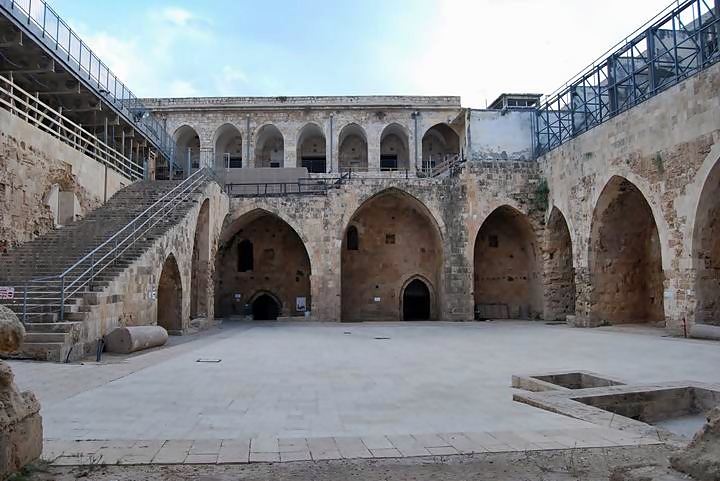 A view of the courtyard towards the north walls. At the end of the yard is a stone-built well, the source of water for the castle. The left gate leads to a gate in the north-west corner of the fortress. Above the court yard is the north side of the  Ottoman/British citadel. 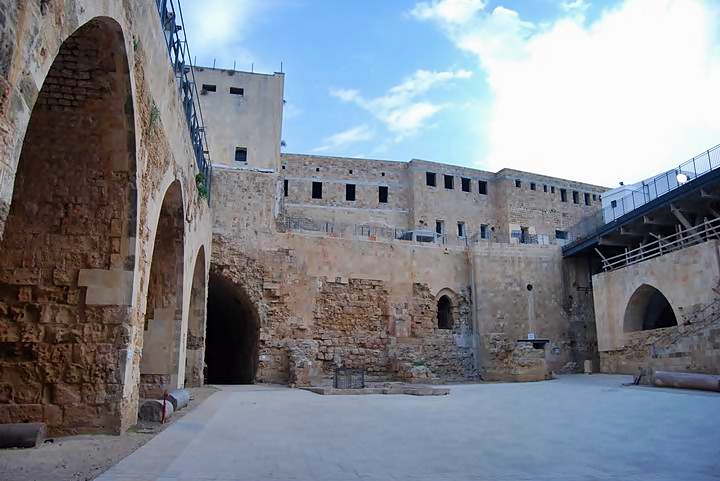 In the north-western side of the courtyard (seen on the far left side of the above photo) is a public toilet, with 30 toilets – seen below. 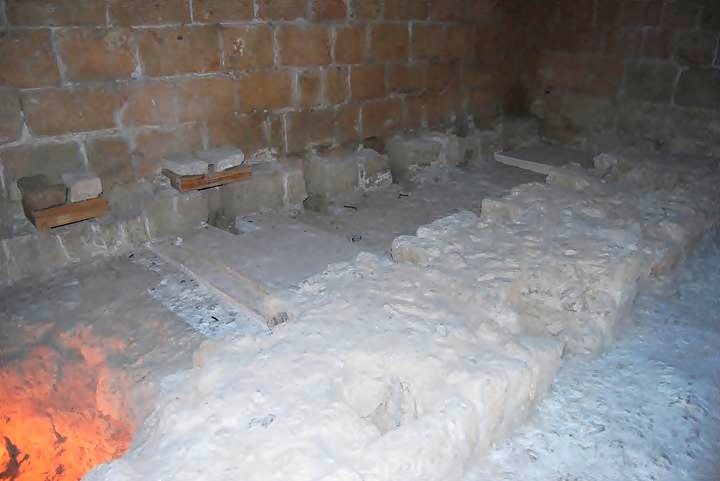 This southern hall is roofed by 7.5M cross vaults, and is the most “beautiful” hall. It is not reconstructed – its all the original 12th century walls and columns. 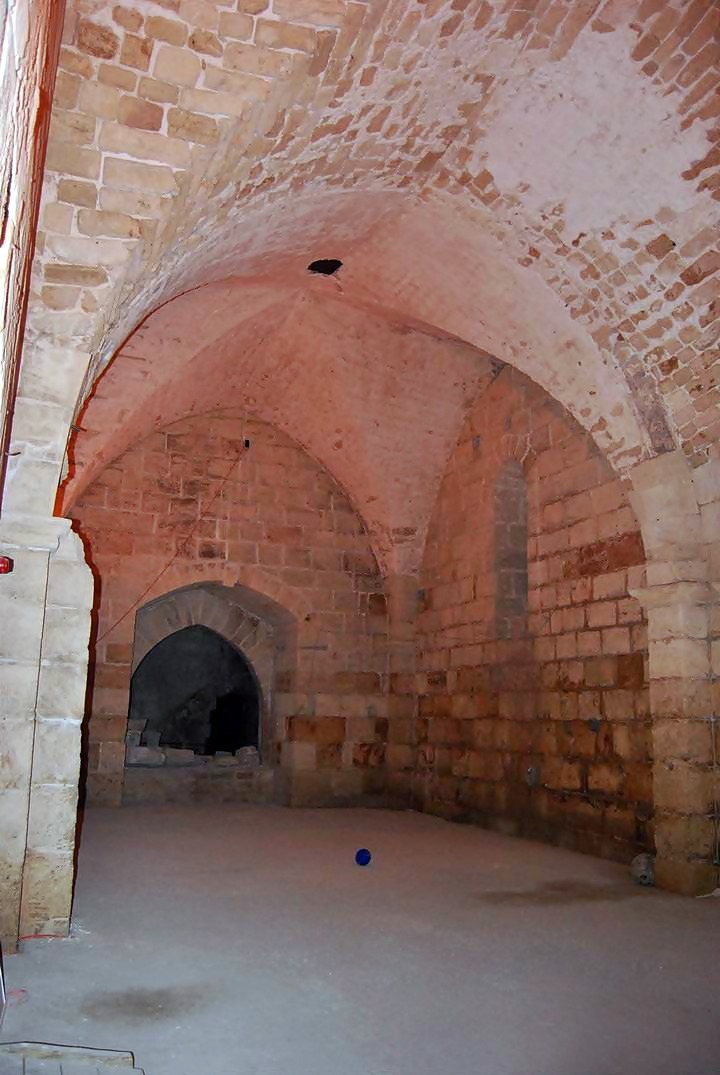 This eastern hall is 5M high and consists of 6 cross vaults.  It is 2.5M lower than other structures, has no windows, and is outside the main complex – therefore it was named as the “prisoners hall”.  Note that although the hall is entered from the north side, its original entrance was from the south. 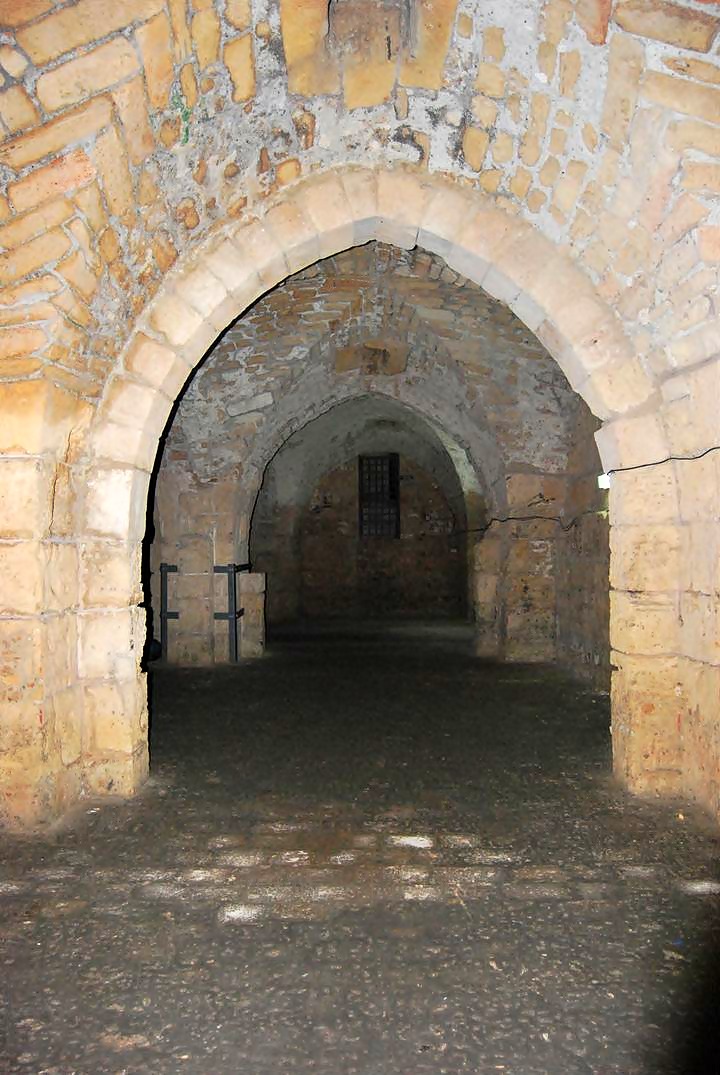 These 6 halls are located on the northwest of the Crusaders complex, behind the northern walls and below the British prison level. They were the barracks of the members of the Hospitalers. The halls, 10M high, are a single large space divided by arched openings. These halls were the first built by the “Hospitallers”  (order of the Knights of the Hospital of Saint John) in the beginning of the 12th century. 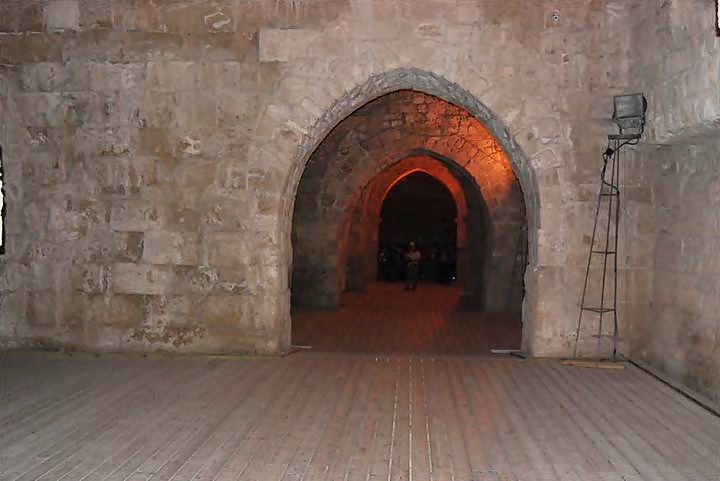 During the 1990s excavations the eastern halls (1-3) were mostly open spaces, but halls 4-6 had to be totally cleaned out. 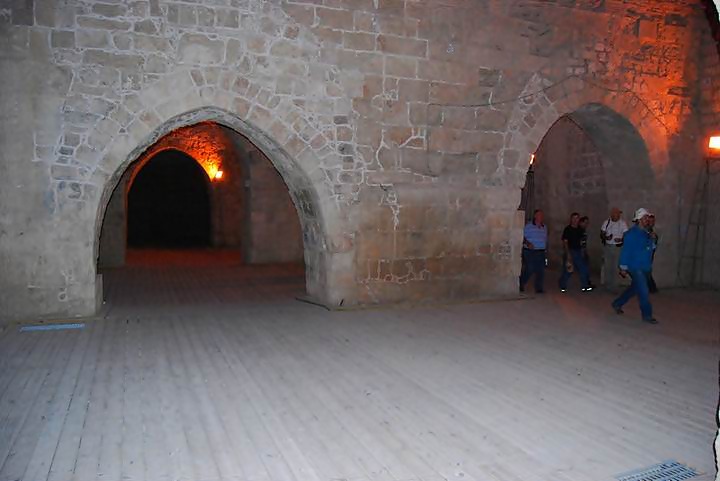