The site is located on a sandstone ridge along the ancient trade route on the Carmel coast. A Crusader fortress is located on the northern side. Recent excavations unearthed Byzantine winepresses, installations, and a trefoil-shaped church and its crypt.

The site is located on a sandstone ridge, along the ancient trade route on the Carmel coast. A 13th century Crusader fortress is located on the northern side and used to protect the pilgrims and trade road. Recent excavations unearthed Byzantine winepresses, installations, quarries, and a trefoil-shaped church and its crypt.

Traces of early man settlements were found around the site (Neolithic/Calcolithic periods on the south west and middle-Paleolithic on the south).  After then, there were no settlements in this area until the Roman period.

An early Roman period tombstone was discovered in the fields, with a Greek inscription of a Roman soldier that served under Agrippa II.

The village was established in the late Roman period and grew at the Byzantine period. These periods witnessed a surge of the sites in the Carmel coast area (a total of 50 villages from Caesarea to Haifa, more than one village per KM). The village was located in two locations on the sandstone ridge: in the center (where the church was excavated) and on the north-eastern side (where the fortress is located).

Stone cutting may have been its main occupation, as attested  by the large number of quarries that cover most of the ridge. The village occupation was also based on agriculture, such as wine production, and it also provided services to the trade route that passed on its eastern foothills.

Recent excavations (2007) unearthed a cluster of winepresses, installations and traces of buildings, and a church.

The village was destroyed and abandoned after the Arab conquest in the 7th century, as what happened to most of the Carmel sites.

A fortress was built during the reign of the Umayyad caliph Hisham ibn Abd al-Malik (691-743, ruled from 724). It was named  “Kafarlab” or “KaferLab” (=village of Lab), and was built on the north-eastern side. The purpose of the fortifications, here and in other coastal sites, was to protect the Arabs against a Byzantine invasion.

The Crusaders built a fortress (“Cafarlet” or “Capharlet”) on the north-eastern side of the sandstone ridge. The fortress was a 58M x 50M rectangular structure with round towers on all corners, and a gate located on its southern wall. It was reconstructed from the earlier Arab fortress which gave it a unique structure (of round corner towers, which is not a Crusaders standard design). The fortress was part of the Crusaders coastal fortifications, built along the pilgrimage route from the north (Acre,  Haifa, Atlit), to the south (Caesarea and further to Jerusalem). 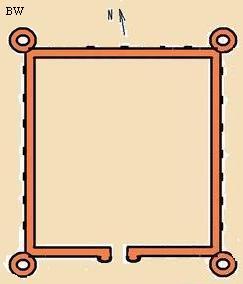 The fort was finally abandoned in 1291 when the Crusaders left the Holy Land. The site stayed in ruins since the Mamlukes period until the 19th century.

Kefar-Lam was a small Arabic village, and its houses were built inside and around the fort. Its name preserved the earlier names. The village was demolished in 1948 during the Israeli Independence war.

Moshav Ha-Bonim (“the builders“) was established in 1949 on its ruins  by Jewish immigrants from South Africa and England, members of the Habonim youth Zionist organization.

In 1985 there was a terrible train crash was to the site, and 19 kids and 3 adults on a tour bus were killed in this tragedy. Ever since the name HaBonim is associated with this tragic event. A monument was erected at the train crossing.

In 2007 the Moshav planned to expand to the south side of the ridge. This initiated the current excavations which unearthed the agriculture installations and Byzantine church.

The site is located on a sandstone (Kurkar) hill, 25M above sea level.  An ancient road used to pass at the eastern side of the site, and the new Haifa-Tel-Aviv highway was constructed at the same location. When you drive by the site on the highway, you can easily see the eastern side of the Crusaders fortress – which is the best preserved wall. The Byzantine village is located several hundred meters to the south of the fortress.

Moshav HaBonim is located 27KM south of Haifa, 1KM east to the sea shore, 3 KM west of Mount Carmel.  It can be accessed from the old highway (route #4) adjacent to Moshav Zerufa.  If you arrive to the site, be sure to visit the remarkable nature reserve park, which is located on the shore west to the Moshav.

An aerial photo is shown below, indicating the major points of interest. The site is located along the Haifa-Tel-Aviv main highway. 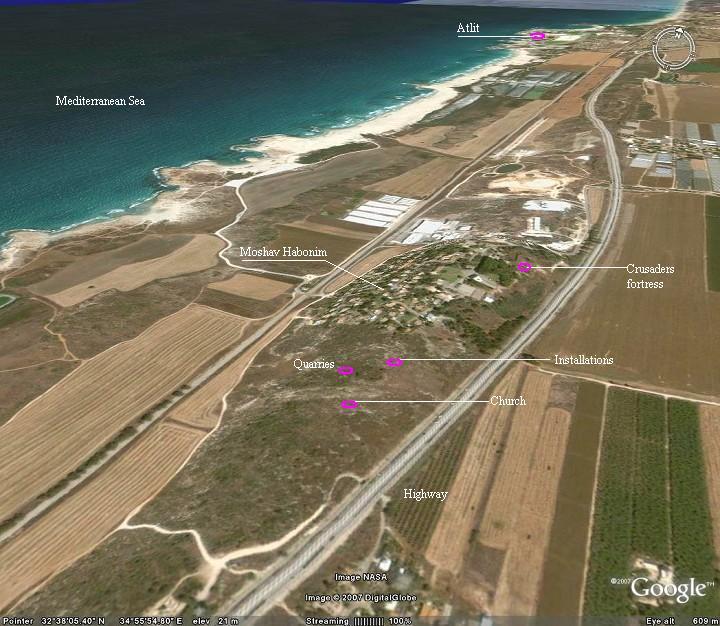 A cluster of Byzantine winepresses and building remains from the early Arab period were unearthed in the excavations of 2007. 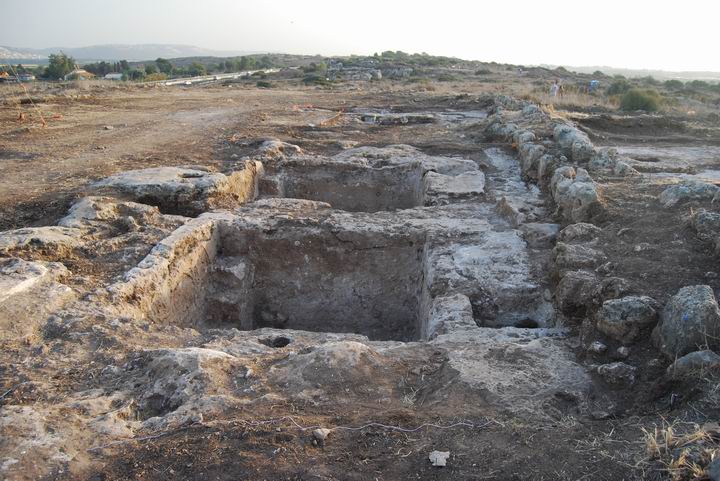 A detail of a winepress is seen below. The wine production process was as follows: the grapes would be placed on the front (hidden) side, and the workers would crush them with their bare feet. The extracted grape juice would then sit in the floor for a fermentation process.

Then, the wine would pour thru a groove into the collecting vat (seen on the bottom center). There it passed through a filter (a collection of thorns or brushes) into the large pit. Steps lead into the bottom of the pit  in order to allow the workers to step down and collect the juice into jars, then store them for subsequent fermentation. 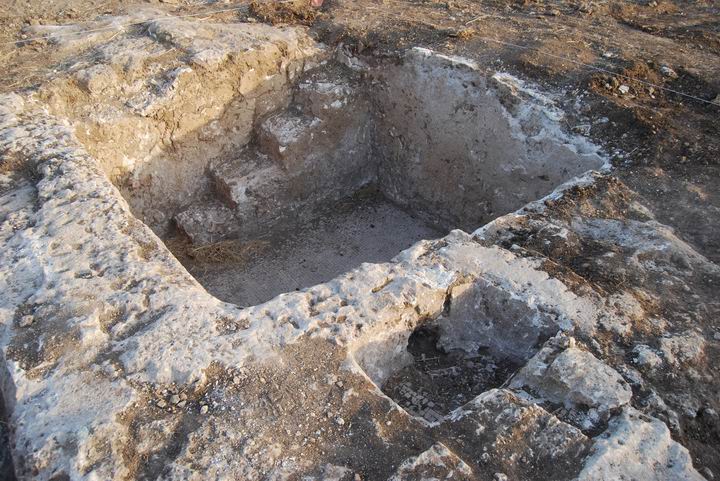 Another part of the winepress, where the grapes are crushed, is seen below. The large crushing floor is covered by a mosaic.

The hole in the center was used for secondary extraction of the juice, using a single fixed-screw press. The press squeezed out the must left in the grape skins and stalks after treading. (Thanks for Rafi Frankel for his correction). 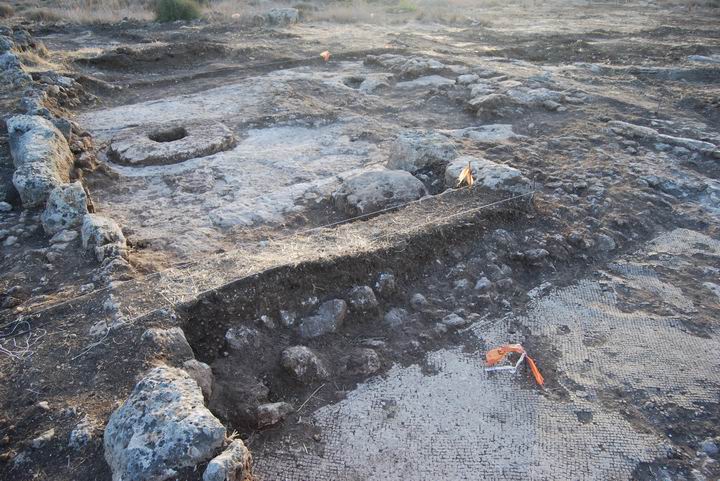 Another view of the winepresses. 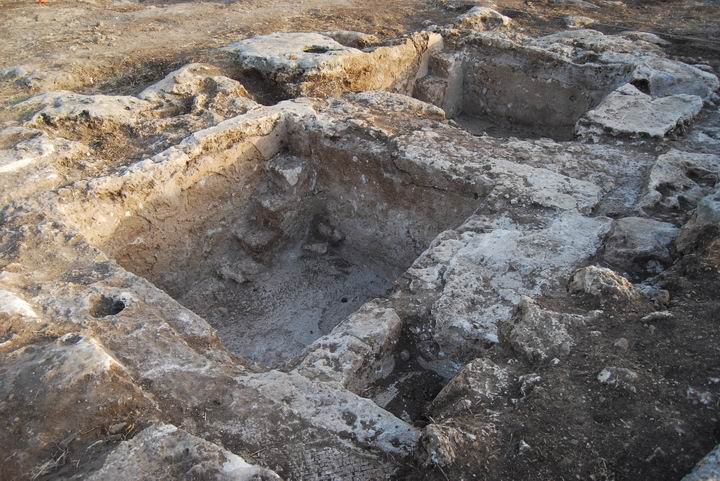 The photo below shows a closer view of the filter and pipe between the treading floor, where the grapes were crushed, and the collecting pit. 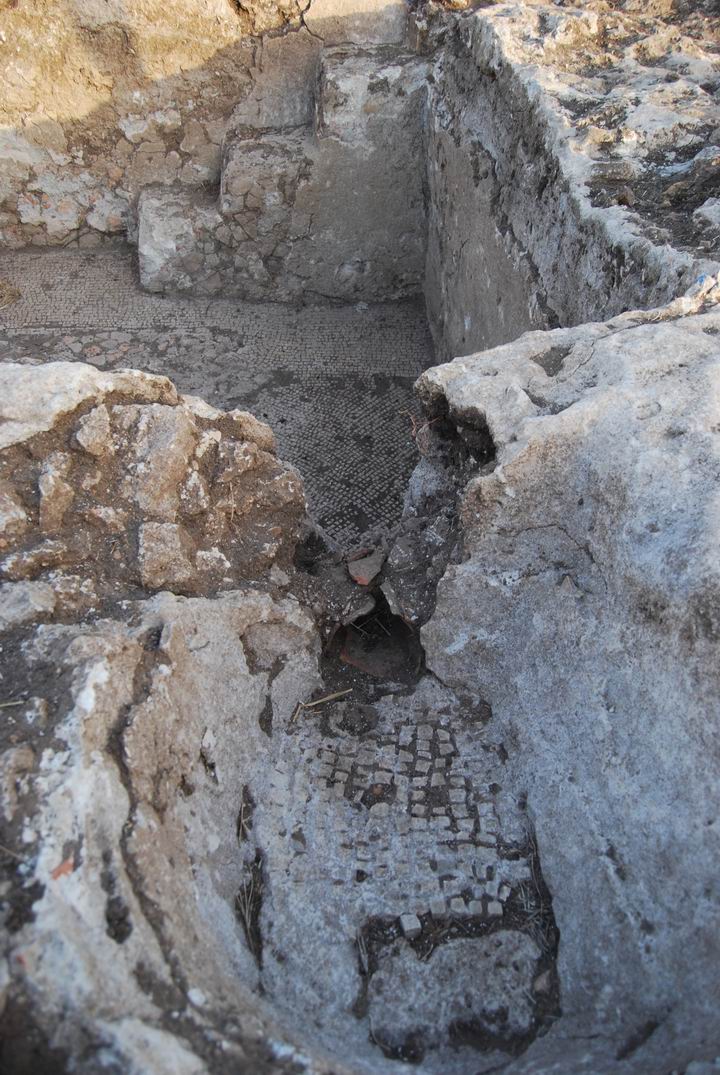 A detailed archaeological report is available in the links section.

In 2007 the excavators unearthed a church on the southern side, shaped in a trefoil design (three-lobed arches, like a leaf). This Byzantine church is seen below with a view towards east, the orientation of the church, where its 3 apses are located.

Mount Carmel is seen in the background. The church overlooked the beautiful plains and the western side of the Carmel, a perfect location for the church. 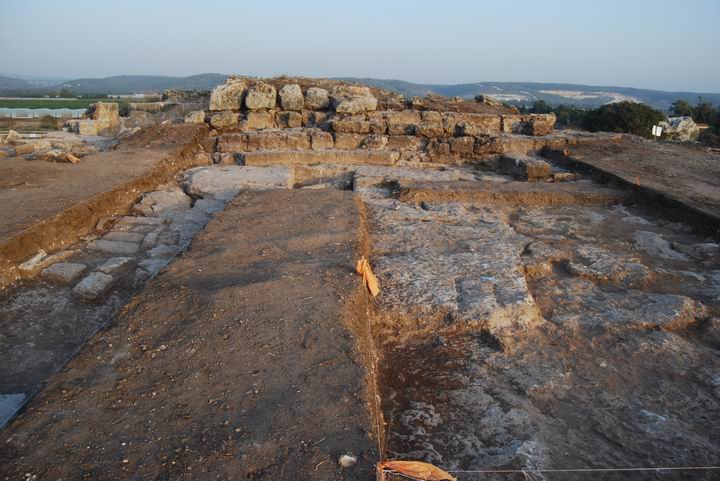 The southern apse is seen below. Moshav HaBonim is seen in the background. 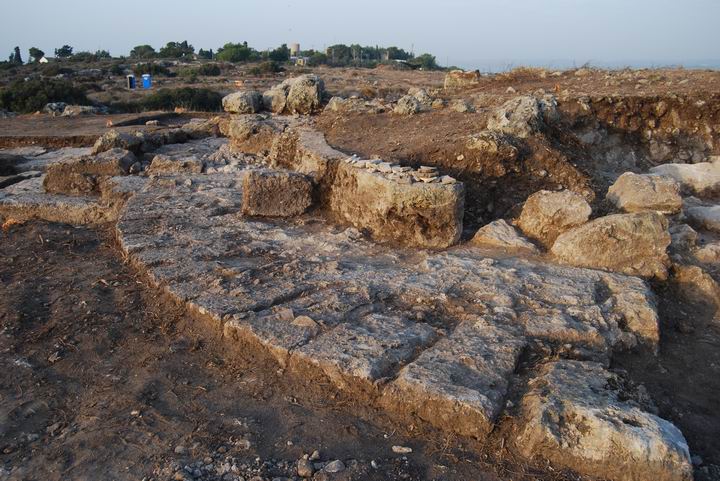 The center apse is seen in the following photo. Note that most of the stones are gone, probably reused in the Arab village houses. 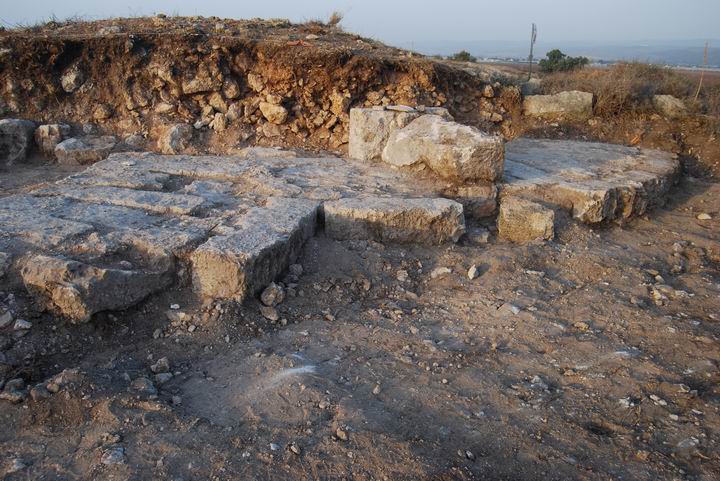 The following photo is the northern apse. 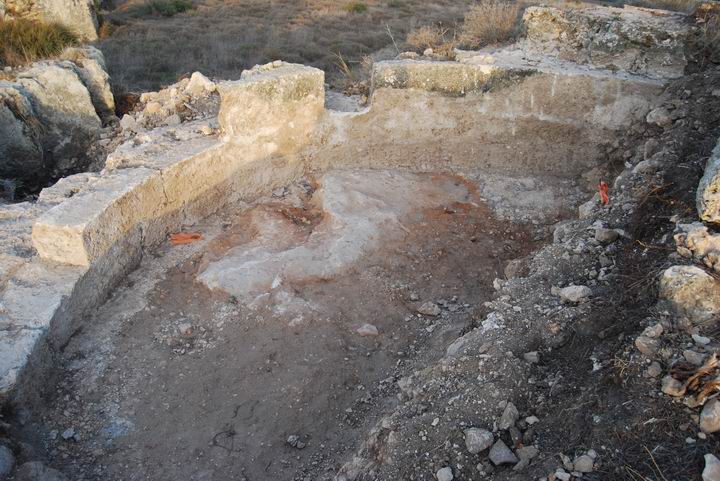 In a cavity under the floor in the center of the church are stone slabs that cover the crypt (=a vault that is found under the floor of most churches). It is not known what was found in this crypt,  which is usually skeletons or relics of important church officials. 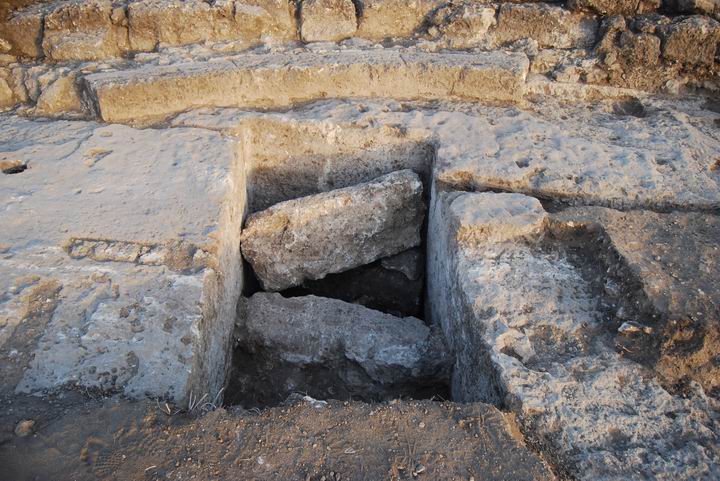 The church was covered after the excavation ended in order to preserve it until further excavations continue to restore the ancient church. 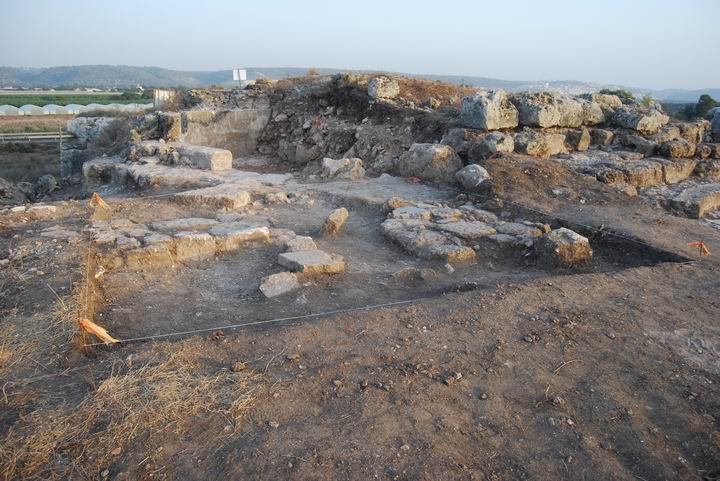 The whole area was a very large ancient sandstone quarry. Few parts of the quarries were excavated, as seen in the photo below. 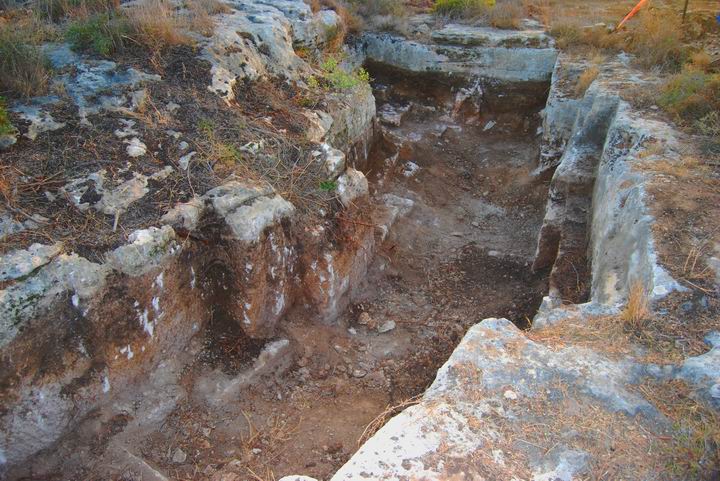 Another section of the quarries, located on the western side. 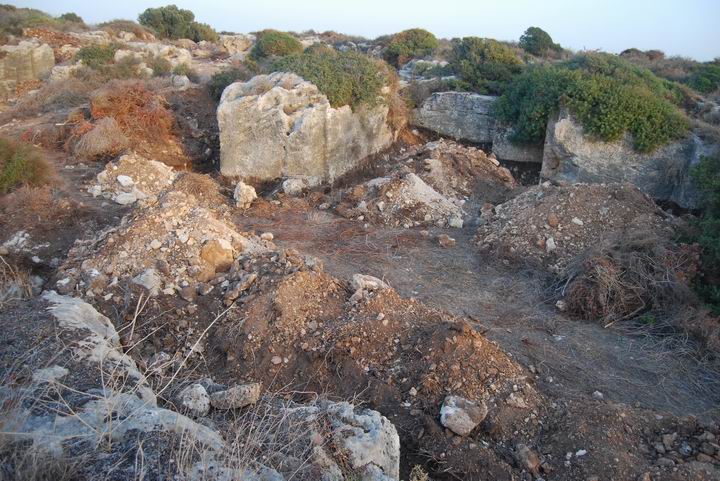 Moshav Habonim is planning to expand their houses into the proximity of this area, which we hope will not be allowed and limited to a safe distance from the antiquities.

The Crusaders built a fortress (“Cafarlet” or “Capharlet”) on the north-eastern side of the sandstone ridge. The fortress was a 58M x 50M rectangular structure with round towers on all corners, and a gate located on its southern wall. The photo below shows the gate on its southern side. 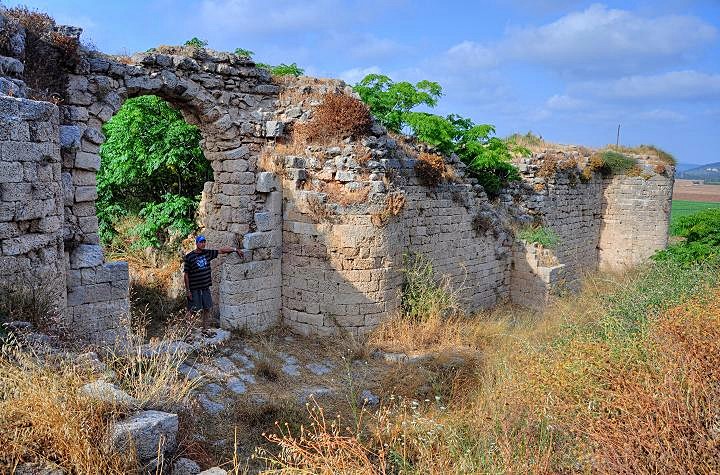 His article was published on  Dec 13  1884 in the New York “Sun”, with the title “Identifying ancient sites”, where he tells his readers about his trip to the ruins of Kefar Lam and his exploration of the fortress. He calls the village “Kefar Nahum (Capernaum) of the Crusaders”. This tradition was adapted by the Crusaders, who substituted the real site on the shore of the Sea of Galilee with this place for practical reasons (of access and security). He also tells about a 35Ft deep well that the villagers discovered near the fortress, 17 rock hewn tombs, and ancient items that the villagers gave him as presents .

This page was last updated on April 29, 2017 (fermentation process)