Ruins of a Roman fort in the Arava, north of Timna. A British police station was built over the ruins. The site may have been one of the stations of the Israelite exodus.

Ruins of a Roman fort in the Arava, north of Timna. A British police station was built over the ruins.

The site may have been one of the Israelites stations after the exodus. It is described in Deuteronomy 10, 7: “From thence they journeyed … to Jotbath, a land of rivers of waters”. Indeed, south-east of the fort are the springs of Yotvata, and the site is an Oasis in the Arava desert.

The springs of Yotvata were an important stop on the north-south road in the Arava desert, located between the Negev the Jordan hills. The “Red Sea” road was a major ancient trade route. This may have been one of the stations where the Israelites stopped on their way to the promised land.

During the times of Solomon the route was used to trade with southern kingdoms such as Ophir (Africa?), Sheba and Arabia (as per I Kings 10).

A site located on the south-western side of the Kibbutz, on the foothills, was inhabited from the Iron age through the Byzantine period.

The Romans constructed a small fort on the side of the ancient road, and designed as a square walled area with 4 towers on each corner. It may have been called Ad Dianam (named after the Roman Godess Dianna), as indicated on a Roman road map. It was constructed in the beginning of the 4th C AD and consisted of a square area (33 x 34M) protected by high thick walls. A monumental inscription was found that tells that the fort was built by the Syrian governor Priscus at about 300AD.

This fort followed prototype Roman fortresses, and can be found in other Roman sites, such as Qasr (Qaser) Beshir (located east of the Dead sea in modern Jordan), which was built at the same time (292) but was a bigger square (51M at its front side).

In the mid 4th century there was a fire in the fort, as seen by ash deposits in most of the rooms. 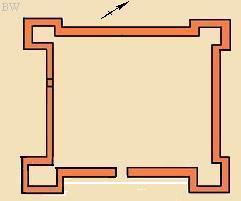 The fort was reoccupied and repaired at the 6th or 7th century AD, and operated for some years. It then was abandoned again for 1200 years until the late Ottoman period.

The site was back in use at the end of the 19th century or beginning of the 20th century during the late Ottoman period. In 1930 the British built a small police station on top of the mound. This  single room building can still be seen today.

In 1952  a Kibbutz was established 1KM north to the site, initially as a quasi-military / agriculture unit (called Nahal, that established many young sites in Israel). The new settlement initially supplied fresh milk and agriculture products to the city of Eilat. It became one of the leading milk products production plants in Israel, specializing in high quality Chocolate milk products. It is highly recommended to make a stop in the restaurant located on the east side of the Kibbutz, and try one of their fine diary products. It is hard to believe how a desert can yield such results, a lesson to be made in other dry areas of the world.

Yotvata is located in the  west side of the Arava desert, part of the Syrian-African fault line, and about 40KM north of Israel’s southern city of Eilat.

The ruins of the fort are located 20M west of the modern Eilat road, and about 1KM south of the Kibbutz. It is located on the east side of the Negev foothills.

It can be easily spotted on the side of the road and is easily accessible. It is advised to make a stop here on the way to Eilat or back, and see how the ancient site is excavated. 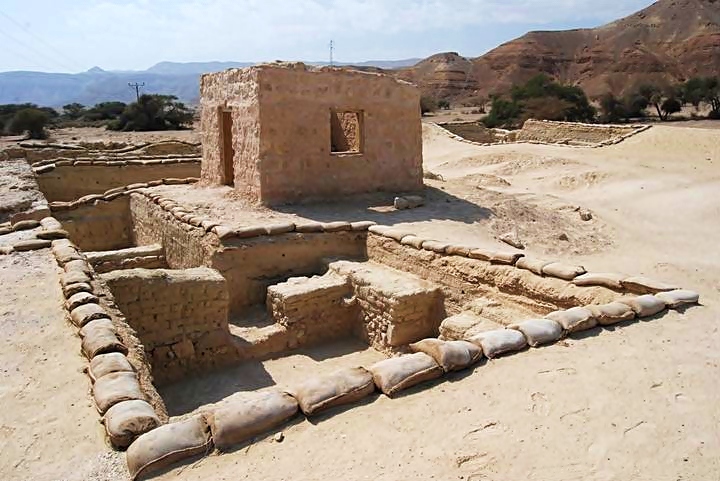 An overview photo below shows the location of the fort in relation to the modern road. The fort is in the center, behind it is the modern road, then the Hai-Bar nature reserve and the Yotvata springs. In the far background are the mountains of Jordan. 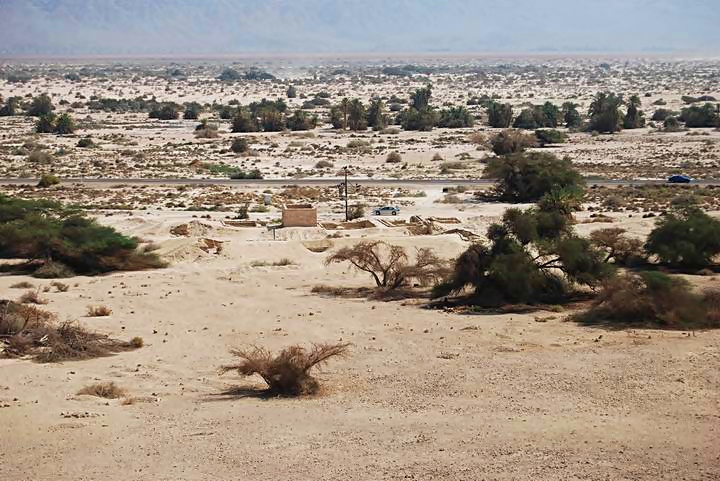 A wider panoramic view of the site can be seen in the following photo. Clicking on the photo will open a flash viewer, which will allow you to move around, and open  a full-screen view.

This is the view of the south corner.  The excavated rooms, as seen on the right, consist of 3 layers at different heights from different construction dates, since the fort was rebuilt several times  (twice during the Roman/Byzantine periods and once during the late Ottoman period).

There was a tower on each of the 4 corners of the square fort, and a door is seen on the upper-left side that lead to the tower on this corner. 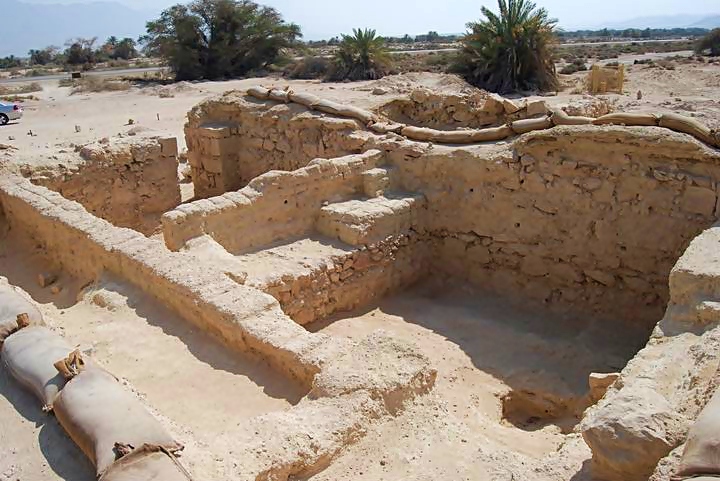 A view of the eastern side, where the main gate was once located in the middle of this wall. The thick exterior wall (2M wide) can be seen on the left side. The base of the south tower, seen on the far left side,  extended outside the walls (both the east and south sides). 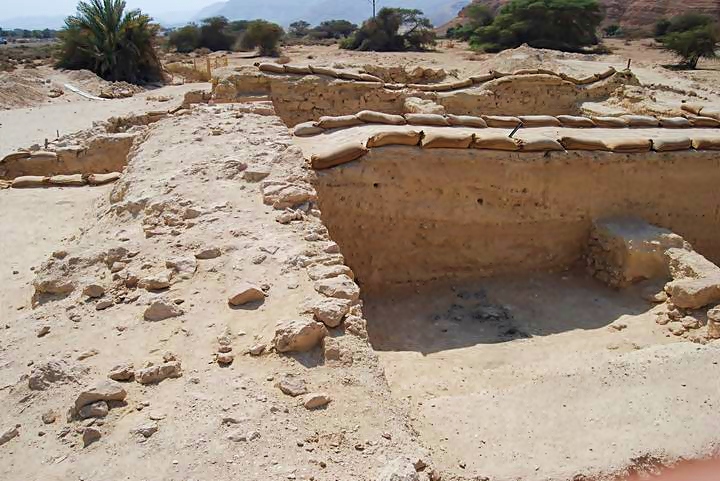 The rooms on the eastern side are seen below, adjacent to the building of the British police station. Inside the room on the top-left side is a circular stone installation whose purpose is not known. 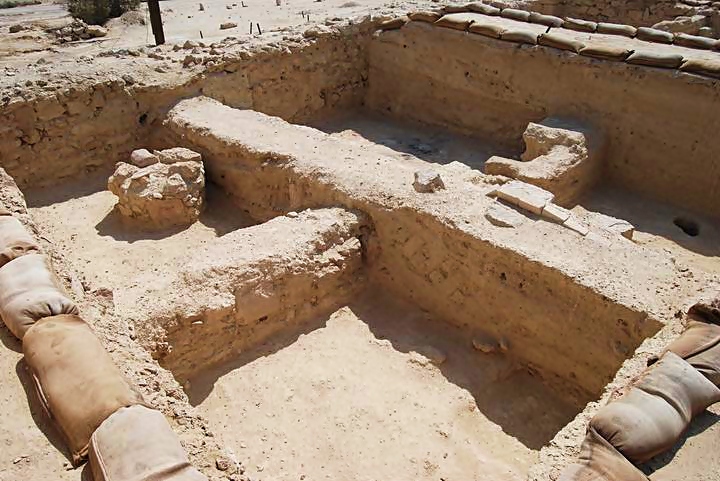 A back door is located on the south-west wall, as seen in the photo below. 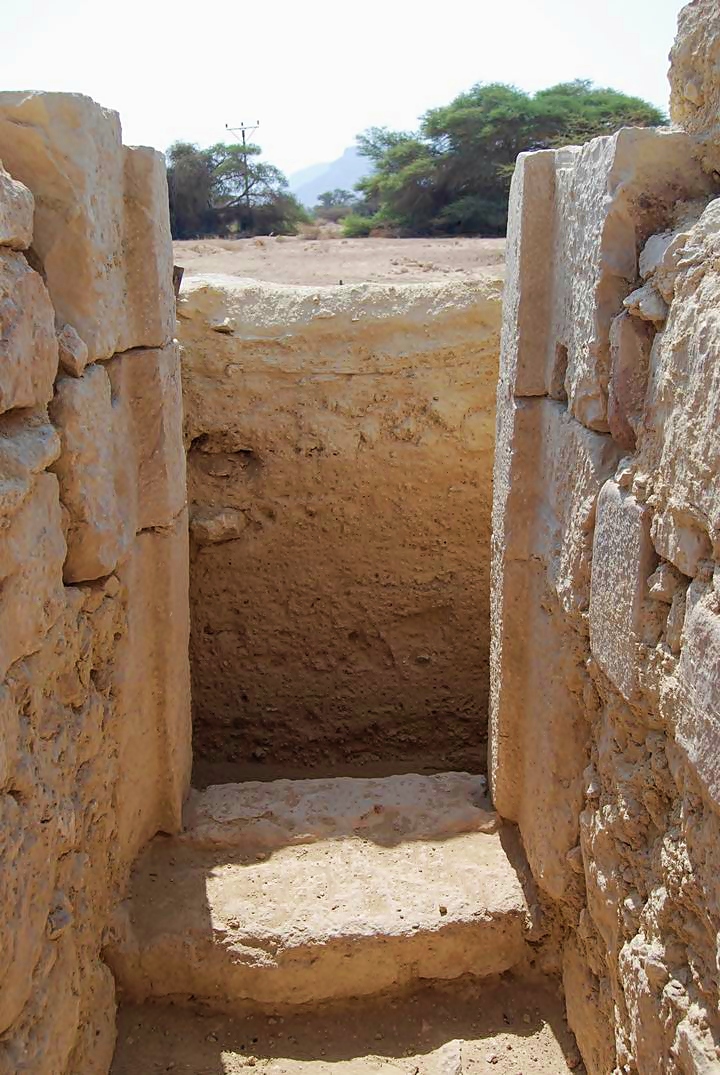 The west corner rooms and tower are seen in the photo below. 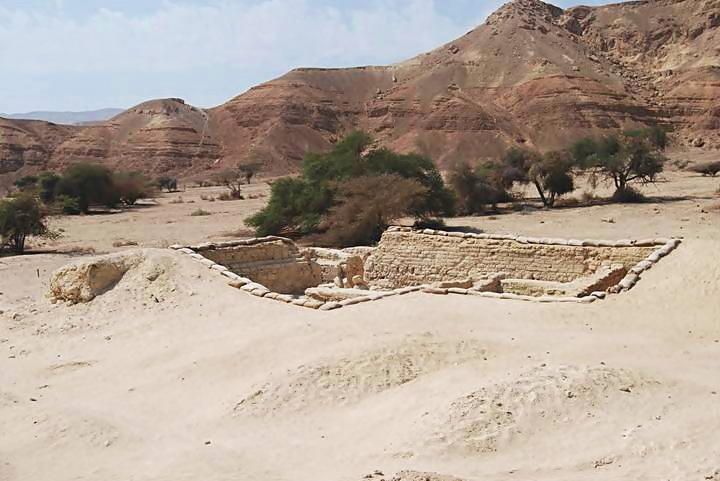 A panoramic view of the north-west side is seen below. On both edges are the two corner towers.

On the west side of the fort is a cemetery, perhaps of  Bedouins.  Small natural tombstones mark the graves. Behind the area are the eastern foothills of the Negev mountains. 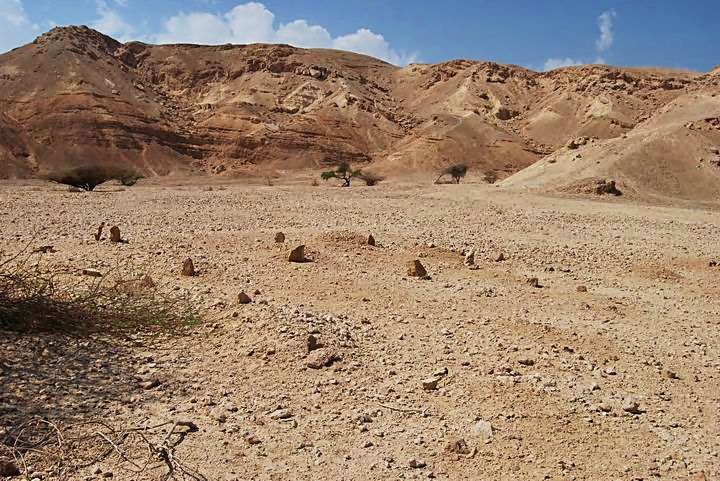 The desert trees and bushes create beautiful pictures that cannot be omitted from the site’s description.  The photo below is taken towards the east (Jordan). 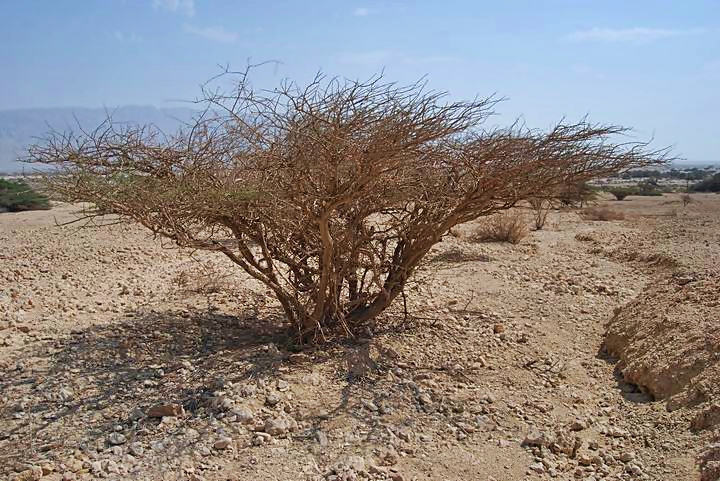 Another view – this one capturing the hillsides of the Negev hills on the rear side of the Roman fort. 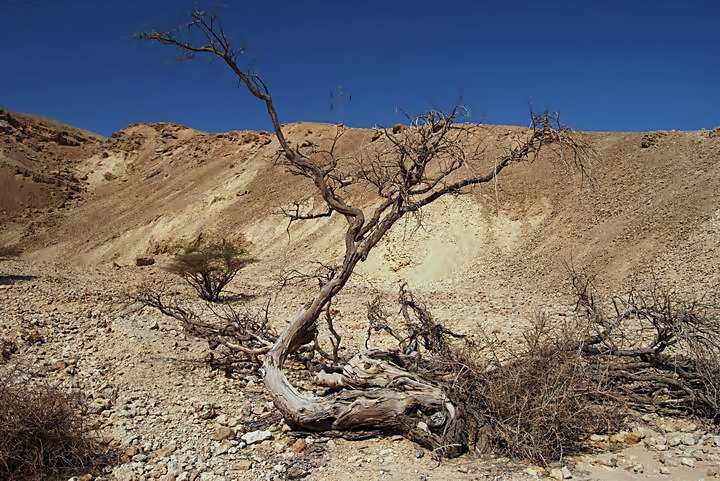 Jotbathah (Yotvata) was one of the stations where the Israelites camped on their way to the Holy Land. Note that according to some scholars, such as Y. Aharoni, Yotvata is located elsewhere in Taba, south of Eilat, which preserved its name.

Jotbath (Yotvata) is described here as a “land of rivers of waters”, which can be interpreted as a desert Oasis:

“From thence they journeyed unto Gudgodah; and from Gudgodah to Jotbath, a land of rivers of waters”.