This page is a gallery  of the Biblical sites that were selected by BibleWalks.com staff and readers as the “site of the month” during year 2008.

Herod the Great, King of Judah (37 to 4 BC),  built this monumental fortress and palace in the Judean desert south of Jerusalem, and was buried here. The site was a rebel stronghold during the great revolts against the Romans. It is one of the most exciting archaeological sites in Israel.

Beit Shean was a major Biblical city, located on the ancient trade route. Adjacent to the its ruins, the Hellenistic city, Scythopolis,  was established and became a major city until its destruction in the 8th century. A new amazing state of the art multi-sensory night show has  transformed the excavated site into a unique world class experience.

1 Kings 4 7-12: “And Solomon had twelve officers over all Israel… Baana the son of Ahilud; to him pertained … all Bethshean, which is by Zartanah beneath Jezreel”

Ruins of an Iron age  site, in the hills above the plain of Cabul. An 11th-8th century BC Phoenician fortress, regional administrative center, military post and agriculture village. The site  may be identified with the Biblical Cabul of King Solomon.

John 5:2: “Now there is at Jerusalem by the sheep market a pool, which is called in the Hebrew tongue Bethesda, having five porches”.

Tell Aphek (Afek, Antipatris) in the Sharon region was a gateway on the main trade route from north to south. More than 6,000 years of successive cities have been built on the mound overlooking the  springs of the Yarkon river.

A Greek Catholic village in the west upper Galilee, built over the ruins of the 12th century Crusader fortress.  The fortress first belonged to the Crusader King Baldwin III, and was called the “King’s fortress” , then owned by the De Milly family. The site was a large Biblical city, identified with “Aloth”. 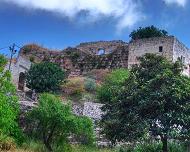 A medieval Monastery located in the valley of the Cross (Rehaviah). Here, according to tradition, grew the tree of the Cross.

John 19:25: “Now there stood by the cross of Jesus his mother, and his mother’s sister, Mary the wife of Cleophas, and Mary Magdalene”. 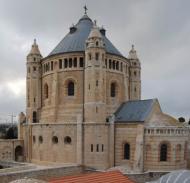 A Carmelite monastery and church on the west top side of the Carmel. The structure was rebuilt in the 19th century, and is one of the most popular sites in Haifa.

Ruins of a Roman/Byzantine village on the western edge of Kziv creek.  In the site are traces of buildings, sheepfold, installations, and traces of a church. On the hillside are stone quarries and rock-hewn tombs.