Ruins of an ancient Hellenistic/Roman period village between Shiloh and Shvut Rachel.

Ruins of a multi period site, located between Shvut Rachel and Shiloh. The ancient village was settled in the Hellenistic and Roman periods. A 2nd century Roman veteran built his mansion on the hill. His burial tomb has a Greek inscription with his name on its entrance.

An ancient industrial area is located to the south of the site.

The aerial map shows the location of Kh. Sarra (Arabic for “ruin of the solid rock”). The site is between the communities of Shiloh on the west side and Shvut Rachel on the east side.

Khirbet Sarra is located on a hill at an altitude of 745m, rising 50m over the valley to the north of it.

Approximately 300m  south of the hill, on the hillside, is an area of ancient installations. 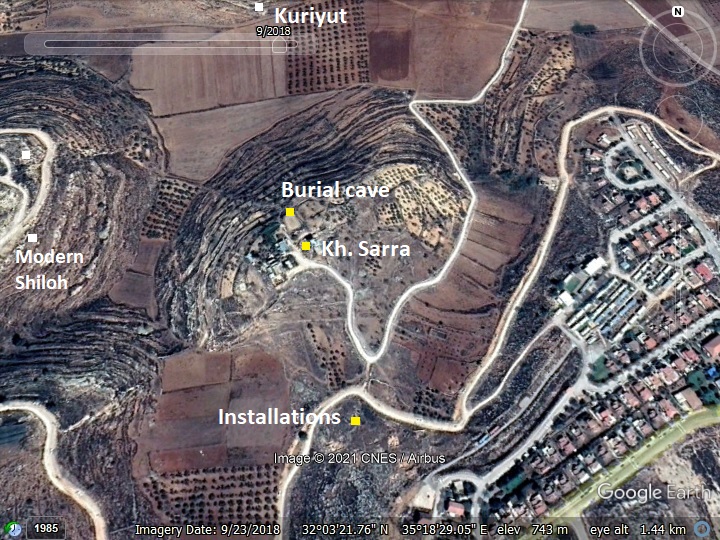 The ancient village was settled in the Hellenistic and Roman periods. The Second Temple village, presently unidentified, occupied the top of the hill.

A 2nd century Roman veteran built his mansion on the hill. His burial tomb has a Greek inscription with his name on its entrance.

An ancient industrial area was recently excavated south of the site – a complex of oil and wine presses. According to the posted video, it  was managed by a certain Miriam in 70 AD.  The locals nicknamed it “Kefar-Miryam”.

Conder and Kitchener surveyed this area during the Survey of Western Palestine in 1882. A section of their map appears below, with Khirbet Sarra in the center.

“Khirbet Sarra (N q).—-Foundations and cisterns. A second ruin, 1 1/2 miles east, to which the same name was applied, consists of heaps
of stones only”.

This section of the map also shows Seilun, where ruins of the religious center of Shiloh were excavated.

In the Wadi north of the site (W. Sürra or W. Sarra- meaning the “valley of the solid rock”) is a spring named Ain Seilun (Shiloh spring). It is a built structure with an adjacent trough. 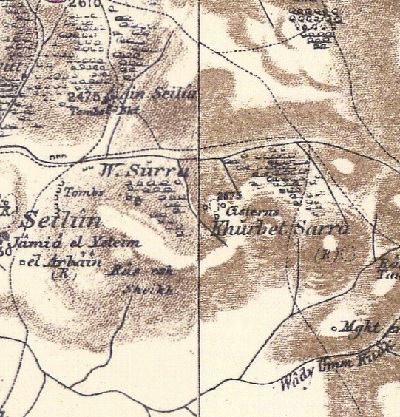 Part of map Sheet 15 of Survey of Western Palestine,

Shvut Rachel is a community east of Shiloh, with more than 120 families. It was founded in 1991 following the murder of  Rachela Druk and Itzhak Roffe who were attacked on a bus.

The hill of Khirbet Sarra is occupied by two Palestinian houses and farming sheds and equipment.

The Second-Temple period industrial area, south of Khirbet Sarra, was recently excavated by the youths of Shvut Rachel and the archaeological office for Judea and Samaria.

A drone captured this view from the north side. On the top of the hill, once the location of the ancient village, are two modern farmhouses and farming sheds and equipment.

In the far background is the community of Shvut Rachel. Just below the front line of houses is the location of the ancient industrial area. 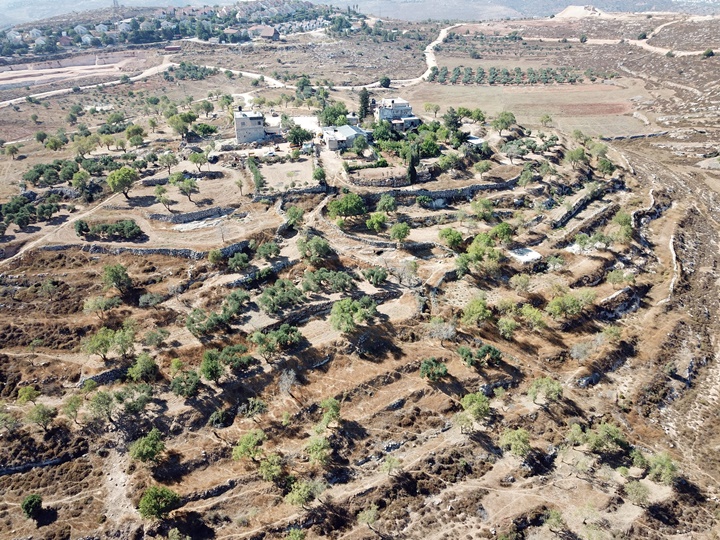 We walked up the hill from the ascent road on its south side. 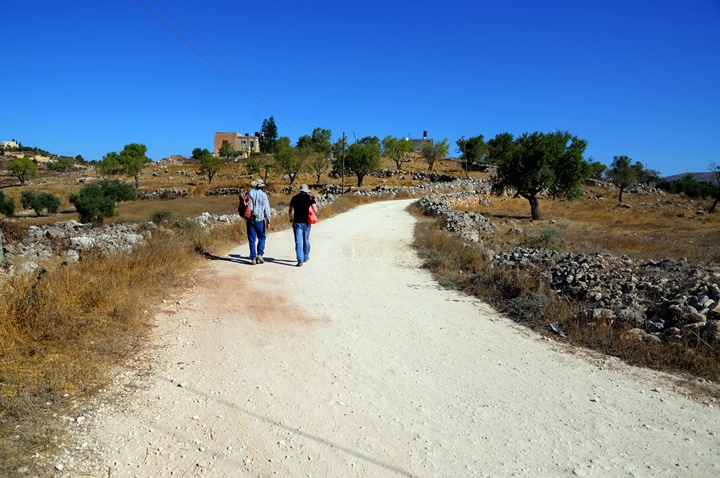 On the sides of the road are traces of ruins, terraces and installations. 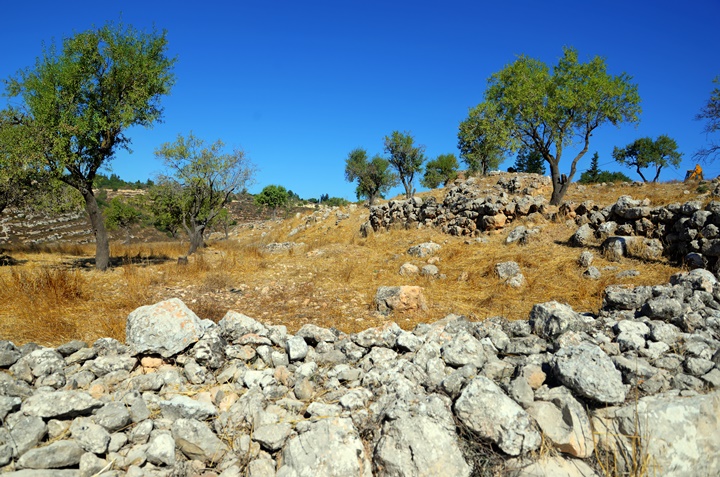 A well and a stone trough were seen on the side of the road. 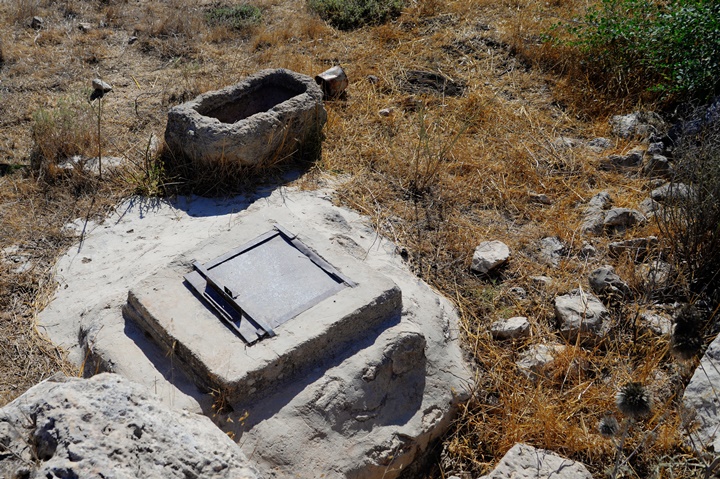 This is a closer drone view of the north side of the hill.

Terraces were constructed along the north and western sides, with trees planted in between. 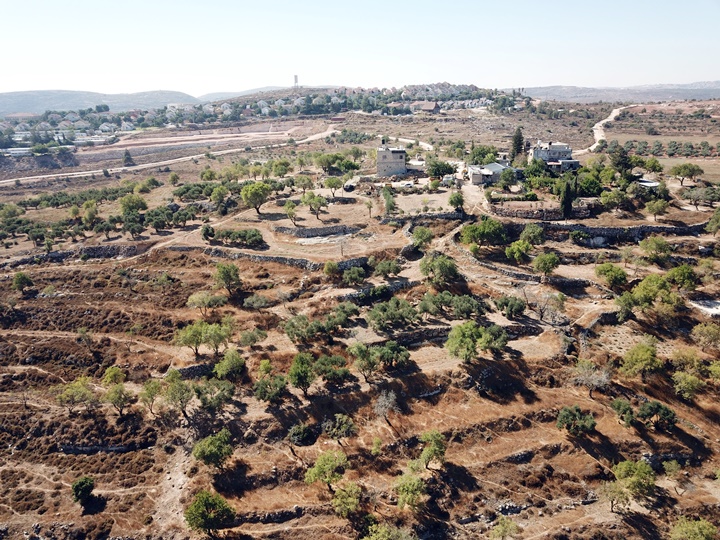 A view of the hillside and the valley below is seen here looking towards the east. 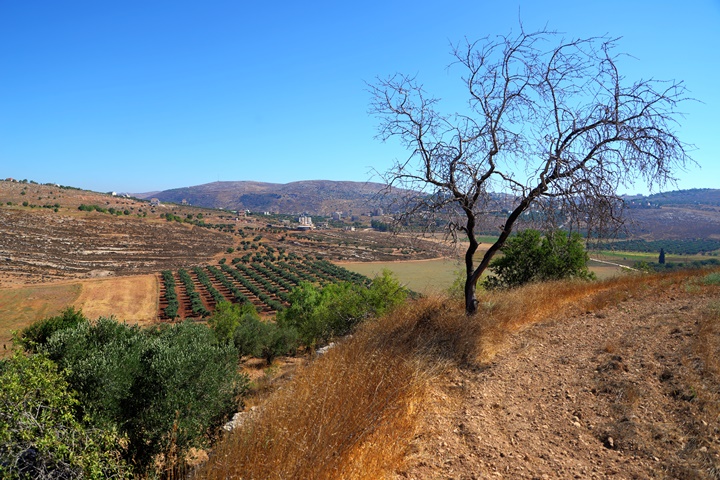 Another view of the northern hillside is below.

In the center far background is the Arab village of Jalud.

In the left side of the background is the edge of another Arab village – Kuriut. 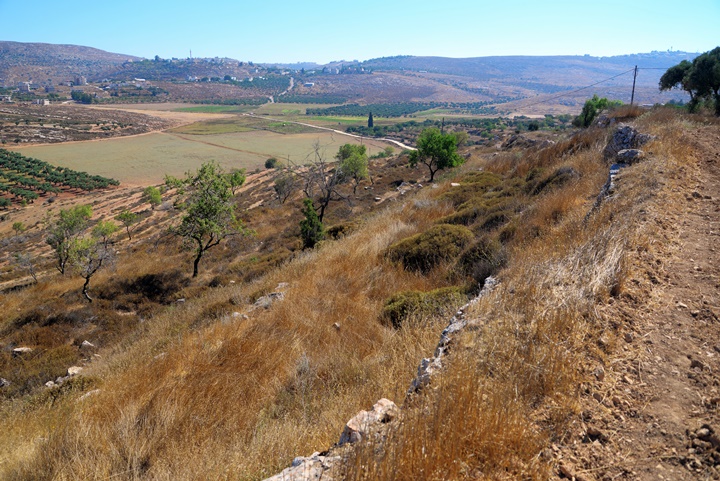 Along the northern foothill are a number of burial caves built into the rock. 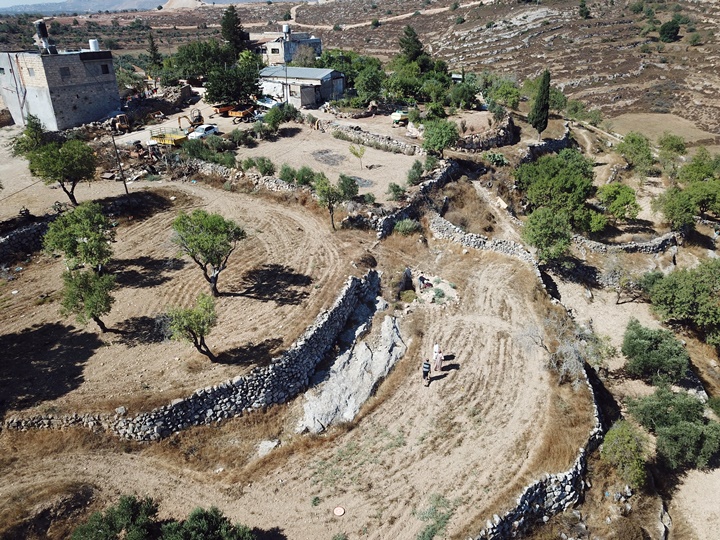 One of the burial caves was the purpose of the visit to the site. The archaeologist, Dr. Dvir Raviv, came to inspect and measure a cave with an engraved inscription.

After arriving to the site we noticed the pile of soil in front of it – remains of an illicit digging. 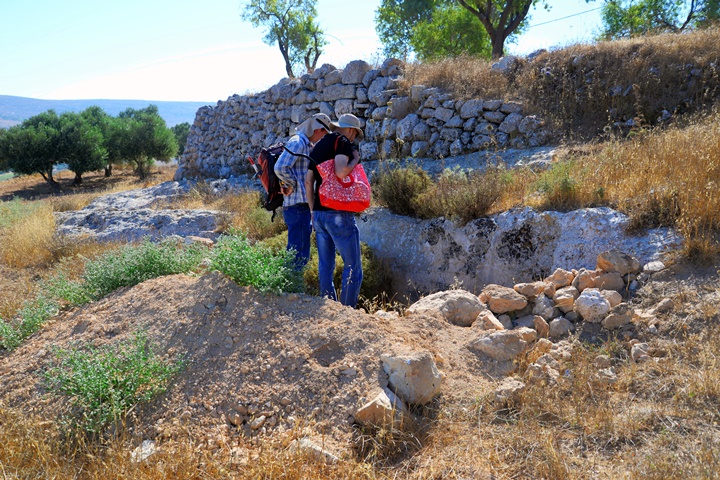 The entrance to the cave is much deeper than the ground level. The illicit diggers removed the soil in order top enter inside the cave. 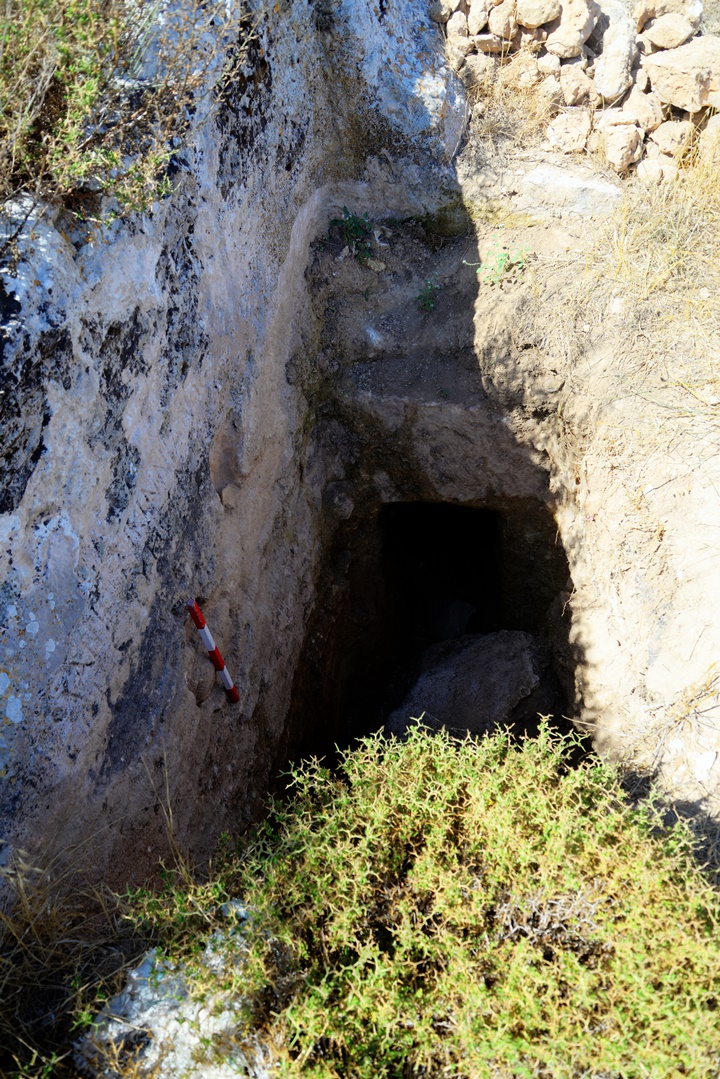 The inscription is in a good quality, although it was in the open air. 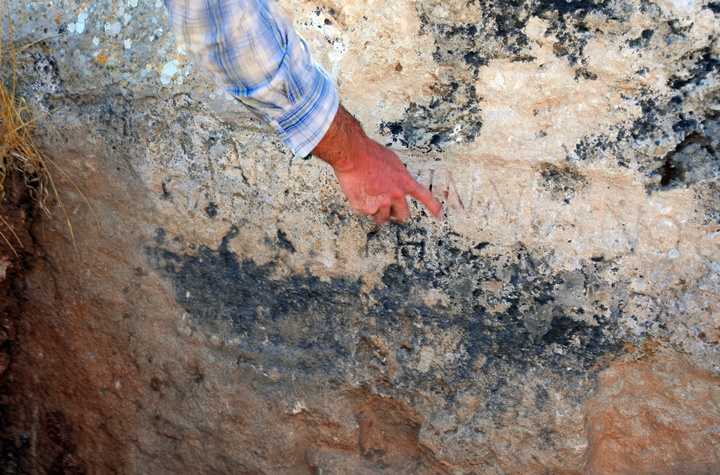 The Greek inscription names the person who was buried here – a 2nd century Roman veteran who built his mansion on the hill.

This may have been a reuse of an earlier burial cave prepared by the Jewish inhabitants of the village. 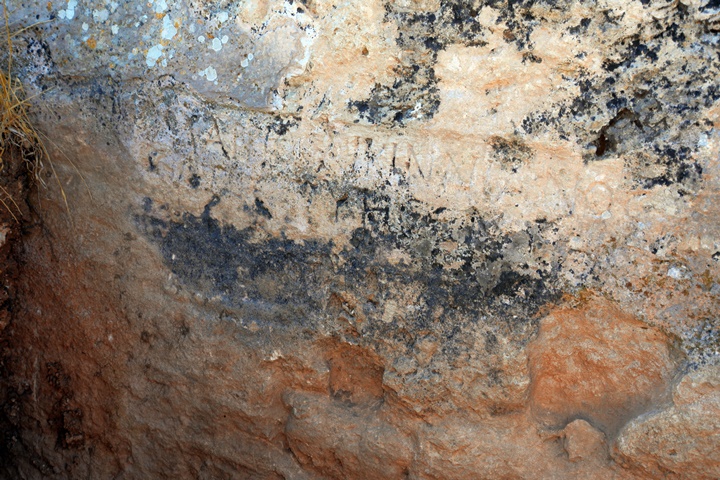 The inner side of the entrance is seen in the following photo. Past the entrance, there is a  step down into the bottom of the burial cave.

Note that each bar on the archaeological measuring stick is 10cm, so the outer side of the entrance is 67 cm x 50cm.

As common in the Second Temple period, most burial caves have a narrow opening, sealed with a square stone. 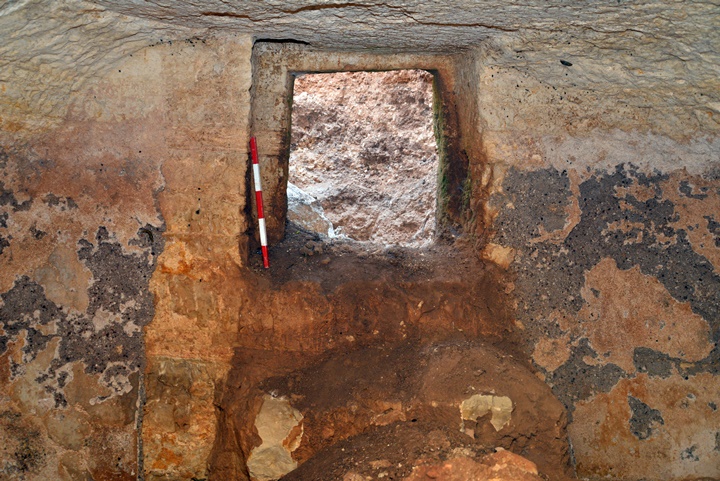 One of the arched burial niches inside the cave is seen here. This is an arcosolia, Latin for ‘arched throne’. Its bottom left side seems as it was recently chiseled away. 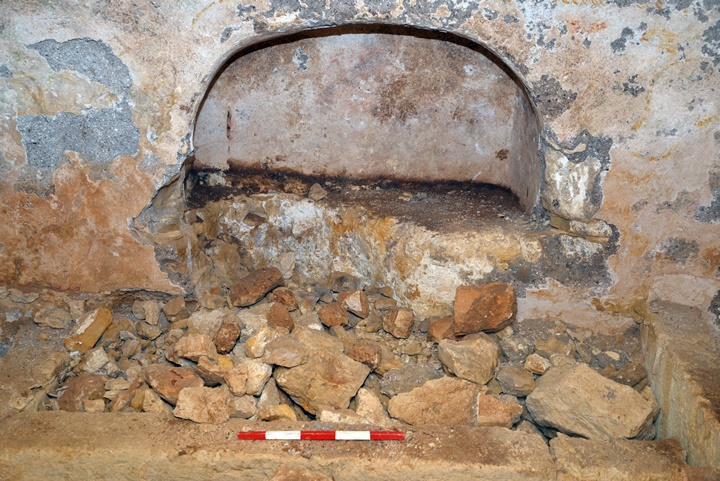 Another rectangular burial niche is seen below, cut into the wall of the cave.

In common burial practices of the Second Temple period, bodies were simply placed on the rock and let to decomposed, then collected into stone chests (ossuaries) which were placed in vaults inside the complex. Some other burial niches used to be sarcophagi. A sarcophagus (sarcophagi in plural) – in Greek – means “flesh eater”. It is a stone coffin, intended to be a multiple use box that contained the body of the deceased for the first phase. After the flesh decomposed the bones were removed to a smaller container or pit, allowing the next member in the family to be placed in the coffin. 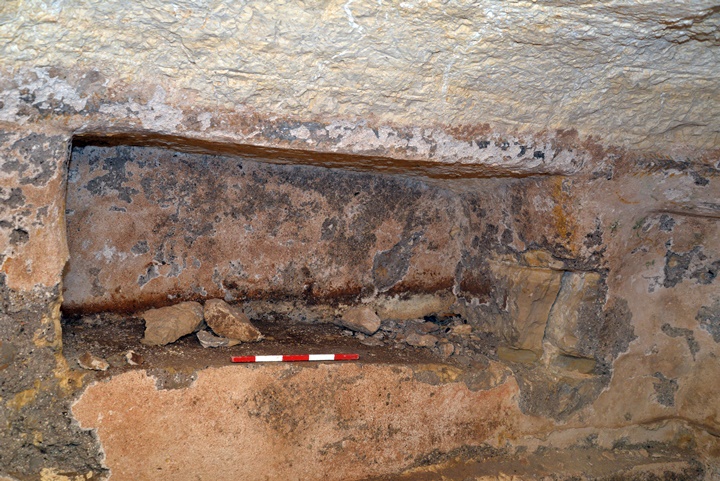 This view was taken from Shvut Rachel, about 300m south of Khirbet Sarra. 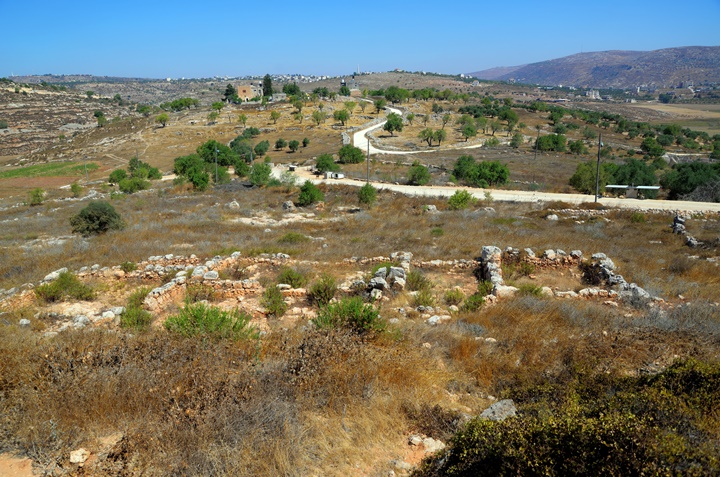 The complex was recently (2017-2021) excavated by the youths of Shvut Rachel and the archaeological office for Judea and Samaria. 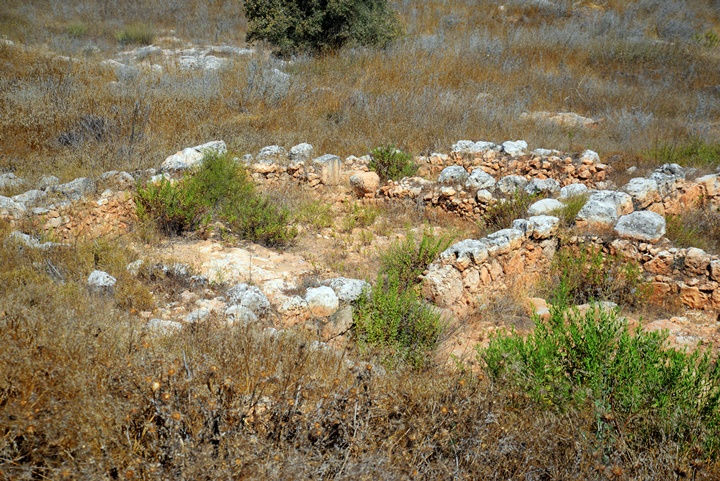 The drone captures the slopes on the north side of the site, where the burial cave is located.

Video and photos captured on July 2020