Shiloh was the religious capital of Israel during the times of the Judges, an assembly place for the people of Israel and a center of worship.   Several Iron Age altars were found in the recent years on and around Tel Shiloh.

The aerial view shows the major points of interest around Tel Shiloh. The yellow squares indicate the places were ancient altars were found, and are reviewed in this page. 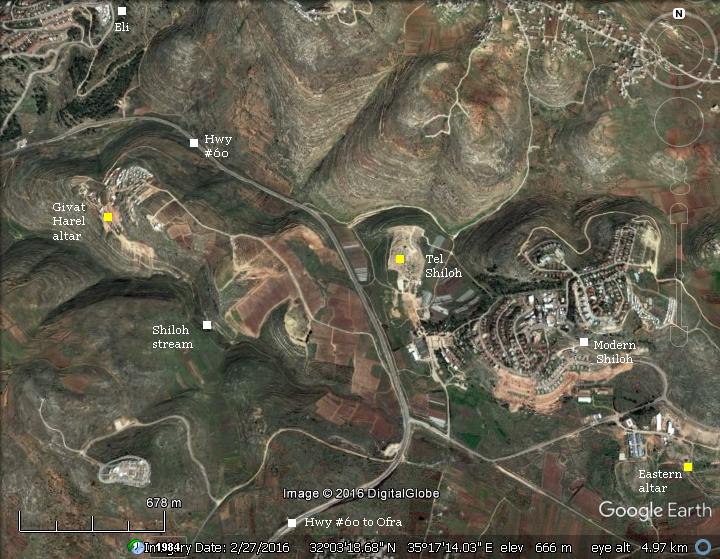 During Iron age I (1200-1000 BC) the region of the high mountain area witnessed a new wave of settlement, following the conquest of the Land by the Israelites. Dozens of villages were established. According to many scholars, the core of the Israelites settled in the area of Manasseh  and Ephraim, and only later expanded  to the south (Benjamin and Judea). Therefore, the capital city was selected to be in Ephraim, and only at the end of this period it moved to Jerusalem.

Shiloh, located in the region of Ephraim, became the religious capital of Israel: it was the assembly place for the people of Israel, a center of worship, and housed the Ark of Covenant. It is referred in many places in the Bible, such the visits of  Elkanah and Hannah when they prayed for a son (1 Samuel 1 1-2): “Now there was a certain man … his name was Elkanah… And he had two wives; the name of the one was Hannah…but Hannah had no children….And this man went up out of his city yearly to worship and to sacrifice unto the LORD of hosts in Shiloh. “.
The location of Shiloh is clearly identified in the Bible (Judges 21 19): “Then they said, Behold, there is a feast of the LORD in Shiloh yearly in a place which is on the north side of Bethel, on the east side of the highway that goeth up from Bethel to Shechem, and on the south of Lebonah”. Since the location of all three of these sites are known, hence Shiloh’s location is clear.

Its location is shown in the center of the Biblical map below. 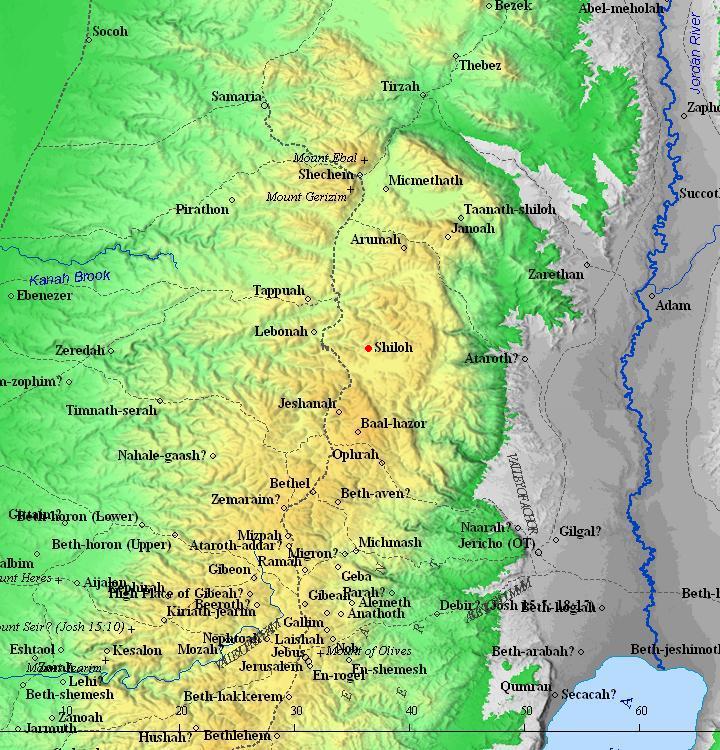 Map of the area around Shiloh (red dot) – during the Canaanite and Israelite periods  (based on Bible Mapper 3.0)

Shiloh continued to serve as the religious capital for 369 years (according to traditions), or about 150 years (according to historians), from the conquest of Canaan until the end of the time of the Judges of Israel.  Following the battle of Ebenezer (~1050 BC) Shiloh was burnt and destroyed.

Since it was a center of worship for the nation for a long time, one would expect that traces of this ritual center would surface. Indeed, over the previous years several Iron Age altars were found on and around Shiloh.

Worship sites often contained altars, where sacrifices were made. These shrines were normally located on a high locations, overlooking an open area where the public would assemble and view the ritual service. Therefore, they were  referred to as “high places”. The worship sites are called in the Hebrew Bible as “Bamah”, and in plural: Bamot.

Before the first Temple was built in Jerusalem in the 10th century BC, the practice of the worship in the Bamot was common and legitimate throughout Israel. Gradually, they became unacceptable, with Jerusalem becoming the sole place of worship. King Hezekiah of Judah (reign 716-697 BC) enacted religious requiring sole worship in Jerusalem (2 Kings 18:4): “He removed the high places, and brake the images, and cut down the groves”. A hundred years later, the sweeping reforms of Josiah (reign 641-609 BC) also brought major religious reforms, forbidding all sorts of worship outside Jerusalem, and destroying high places from Beersheba to north of Samaria (2 Kings 23:19-20): “And all the houses also of the high places that were in the cities of Samaria, which the kings of Israel had made to provoke the Lord to anger, Josiah took away, and did to them according to all the acts that he had done in Bethel. And he slew all the priests of the high places that were there upon the altars, and burned men’s bones upon them, and returned to Jerusalem..”.

There were various types and sizes of altars for different types of sacrifices and in context with various events. One of them is the four-horned altar.

A common type is the four-horned altar. Its style is based on a flat surface with horns on its four raised corners called “horns” (as in bulls).

The Bible describes the structure of the altar (Exodus 27:2):

“And thou shalt make the horns of it upon the four corners thereof: his horns shall be of the same”.

“…and from the altar and upward shall be four horns”.

The altar was used for sacrifices, as mentioned in numerous places in the Bible (Leviticus 8:15):

“And he slew it; and Moses took the blood, and put it upon the horns of the altar round about with his finger, and purified the altar and poured the blood at the bottom of the altar and sanctified it, to make reconciliation upon it”.

In addition to the ritual use, the horned altar had a judicial function: if an unintentional murderer held a horn in one of the 6 cities of refuge, he would escape a blood feud as the avenger was forbidden from harming the killer. For example, Adonijah son of David, contested his brother’s ascension to the throne, saved his life by holding on the horn, and was spared (1 Kings 1:50-51):

A replica of a four-horned altar found in Tel BeerSheba, seen below. It was smashed, then incorporated in the walls of the storehouse, where the archaeologist have found it. 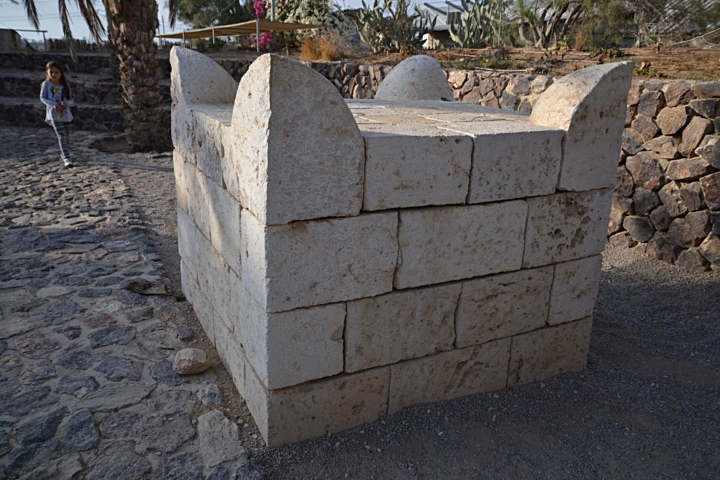 Only few altars were found, such as the altar in Tel BeerSheba (above). One of the reasons is that most of them have been destroyed, then buried or later embedded into the new structures. This act was described by the Bible related to the sweeping ritual reforms of King Hezekiah, who centralized the worship of God in Jerusalem, and abolished the ritual high places elsewhere (2 Kings 18: 1, 4): “Now it came to pass in the third year of Hoshea son of Elah king of Israel, that Hezekiah the son of Ahaz king of Judah began to reign…. He removed the high places, and brake the images, and cut down the groves…”. Large scale destruction of high places were found in other cultic centers in Israel.

Altars hewn of a single rock, like the two altars described in this page,  are not common. Few such rock hewn altars were found to date. Other altars were found near Zorah (the “Manoah” altar shown here below), and in Samaria city (Sebaste). 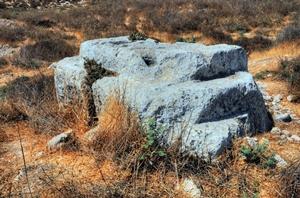 Manoah Altar near Zorah – cut from one piece of rock

The remainder of this page reviews three altars that were found so far in the vicinity of the worship center at Shiloh.

The altar in Givat Harel is  located 1.5km west of Tel Shiloh.  This ritual installation, carved out of one large piece of limestone, has four “horns” that point to the cardinal directions (north, east, south and west). Its design is based on the Biblical and Mishna descriptions. 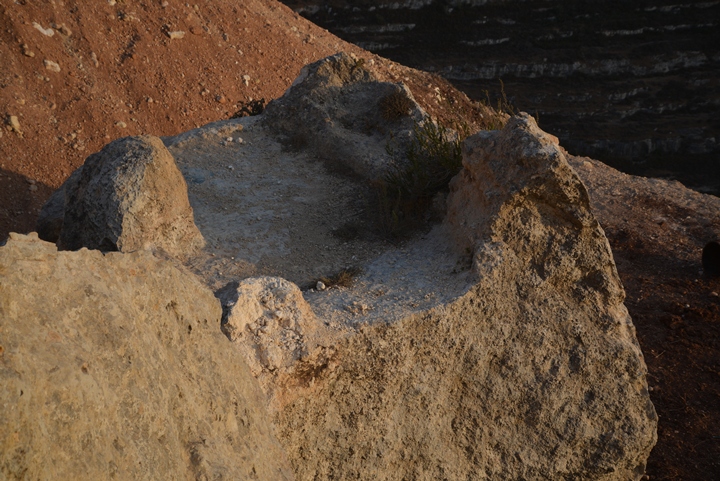 The large size of the altar suggests that animals were sacrificed here, as opposed to smaller altars where smaller offerings such as wine and grain were offered. 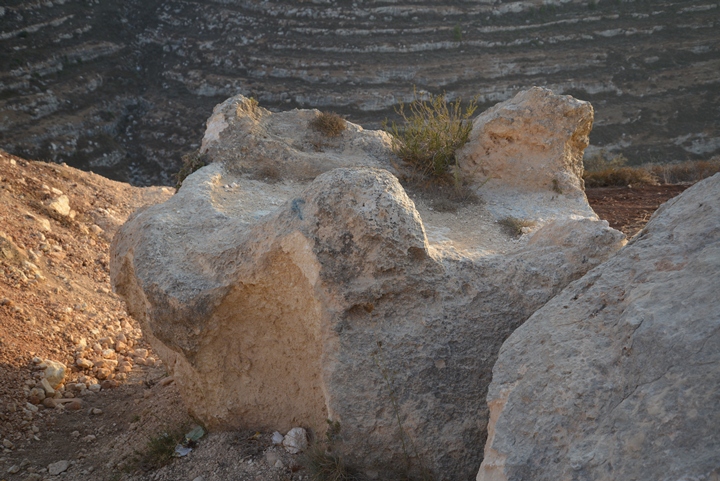 The altar in Givat Harel is located on a an open area, away from one of the Jewish settlements in the vicinity. It is situated on a terrace just above the abyss overlooking the steep valley below it, far from the summit which is 70m higher. 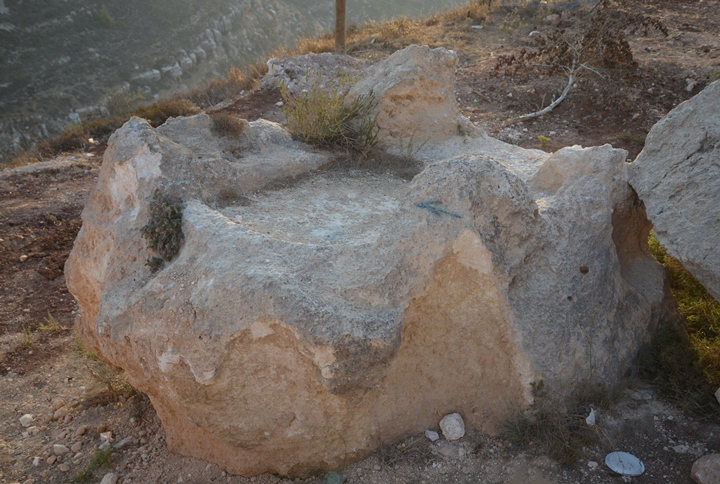 The altar overlooks the Shiloh stream valley. Here, a view towards the east in direction of Shiloh.  The location of the altar, on a highly visible place but not on a mountain peak, is typical of the Jewish ritual “high places”. 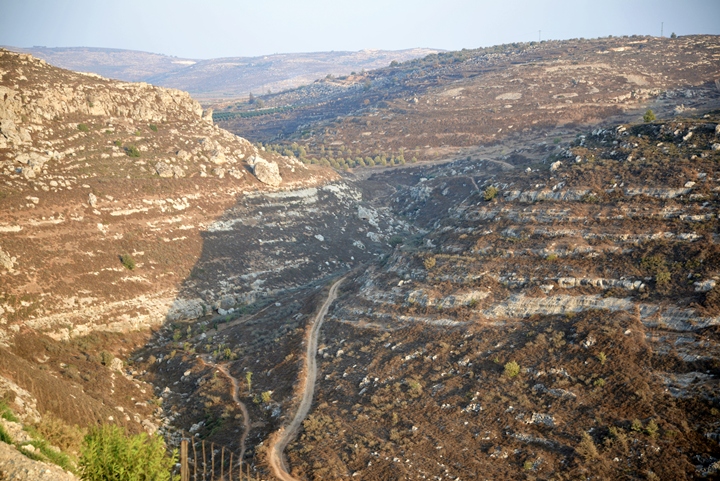 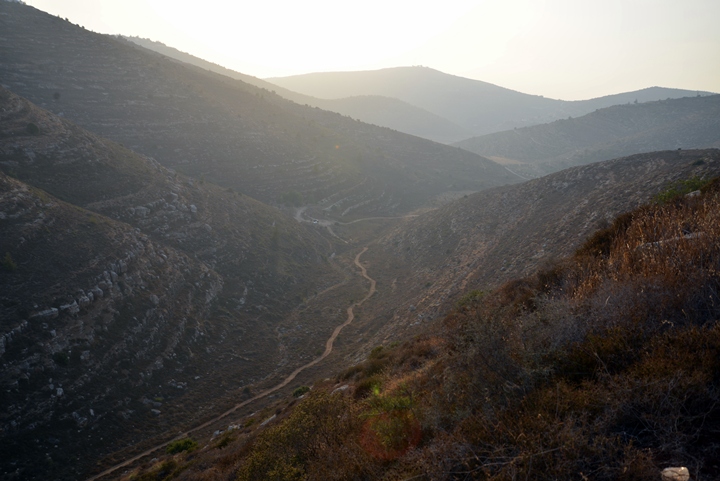 Some scholars suggest to identify this altar as the temple built by Micah during the Israelite judges period.    (Judges 17:1,5): “And there was a man of mount Ephraim, whose name was Micah…And the man Micah had an house of gods…”. The Bible describes how provides only a coarse location of Micah’s house – near the Mount Ephraim – but this area could fit the area of the nearby Lebonah ascent.

Drive to the Givat Harel community and follow the signs to the altar.

(b) Altar  in Eastern Shiloh

Another altar was found 1km east of Tel Shiloh, on the edge of the industrial zone in Shiloh. It is dated to the Iron Age. 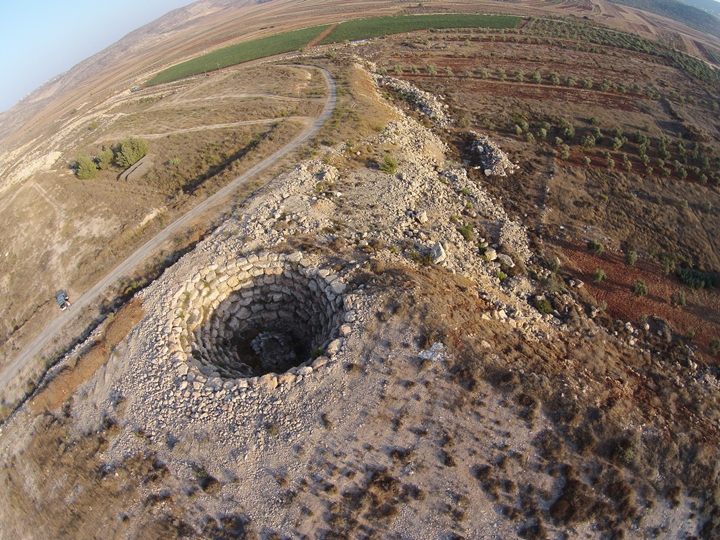 The ancient altar is in the center of the modern structure, consisting of large stones that were arranged as a tower that protects the historic structure. 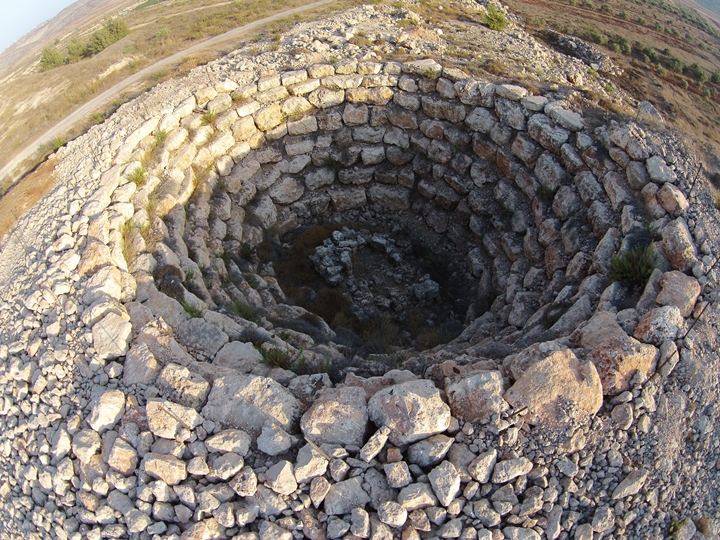 A closer view of the altar is in the following photos. 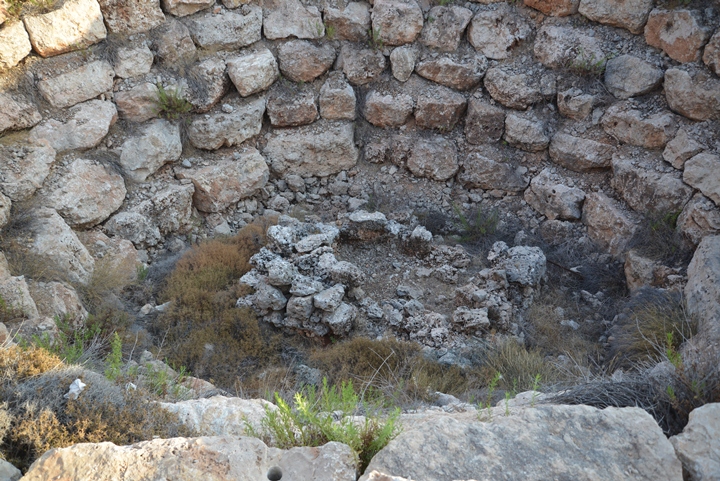 The altar is constructed of stones and arranged in a rectangular form. It may also have have four horns as in the previous altar. 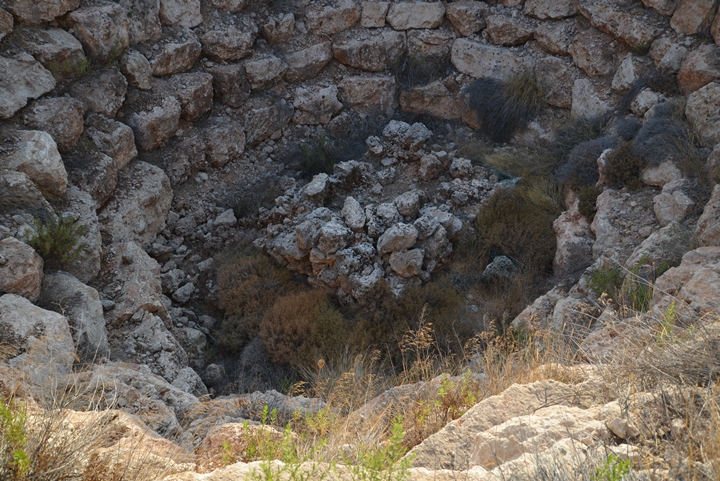 Drive to the industrial area on the east side of the Shiloh community, where the Shiloh winery is located. Continue along the road for 200m.

A fragment of a four horned altar was found during the 2013 excavations. It was later embedded into the wall of the Byzantine period church.

The location of the altar is marked as a red square at the south side of Tel Shiloh, in a an Ottoman period mosque called Jamia el Yeteim.  Archaeologists exposed two Byzantine churches under it, one built in the 6th century and the lower one in the 4th century. The lowest level may have been built over the ruins of an ancient synagogue.

The builders of the structures reused earlier hewn stones in the walls, and one of them was a fragment of an altar.

The stone is seen below at the bottom of the wall, near the round base of a column. 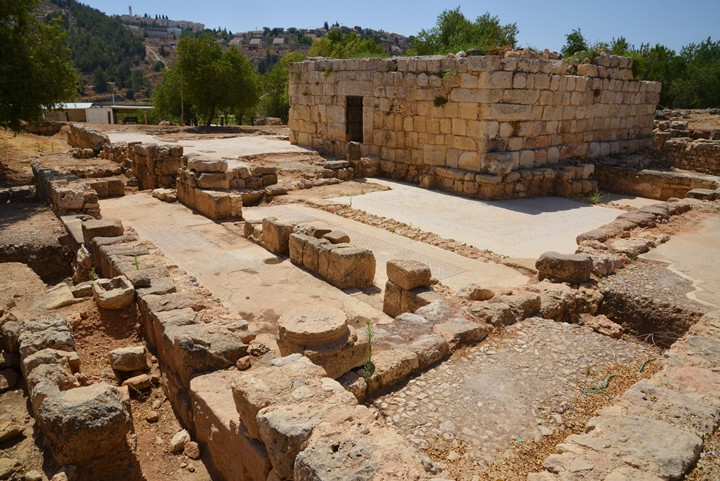 A closer view of the altar is seen in the following photo. One of its horns remains intact, and is seen on the lower left side of the square stone. 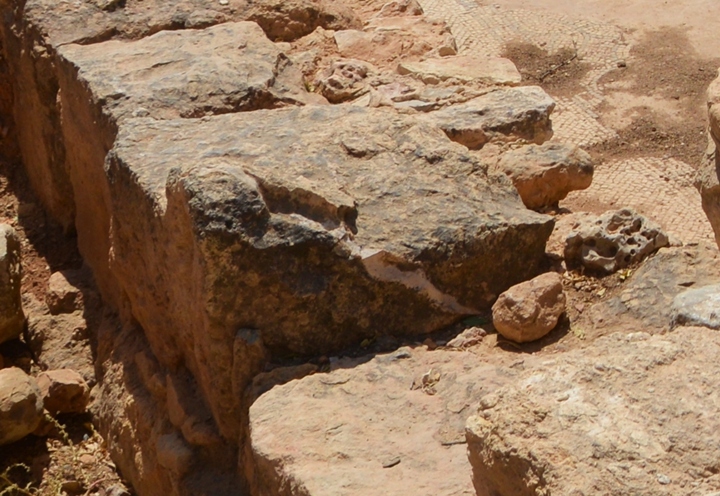 The altar size is 60 cm by 60 cm in area and its height is 40 cm. Its horn is12 cm high and 18 cm long. A sign on the side of the wall illustrates the full diagram of the altar before it was broken and installed into the wall. 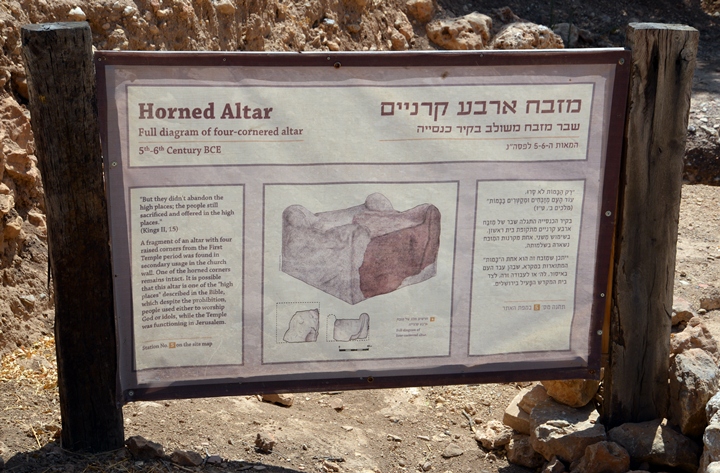 Archaeologists dated this altar to the 5th-6th century BC, at the time of the first temple in Jerusalem.  The Bible tells us that although the sacrifices were allowed only in Jerusalem, altars were erected and used in other places as well. (2 Kings 15:4): “Save that the high places were not removed: the people sacrificed and burnt incense still on the high places”.