Ruins of a large (500 m2) Roman/Byzantine village on the north-east foothills of Giv’at Hamoreh. A cemetery is located on the hillside above the village, with many rock-hewn burial caves, cist graves and sarcophagi.  Other rock cuttings, quarry and agriculture installations, are located near the ruins.

The village of Sahar/Sireh was established in the Roman period and existed until the early Arab period. Its ruins are located on a plain east of the foothills of Giv’at Hamoreh, covering an area of 500m2. A road traverses the village from west to east along 50m, which connected it in ancient times to Naim (Nein, 3 KM to the west) and Kh. Elef  (Ma’luf, 300m to the east).

The site is famous for its extensive rock cuttings – agriculture installations, a quarry, a large cemetery including burial caves, cist graves and sarcophagi, and a quarry.

The site was examined in the PEF survey (1866-1877) by Wilson, Conder and Kitchener. It appears in the center of the section of this map of 1878 as “Khurbet Sireh” on the east and “Kh. Maluf” on the west. 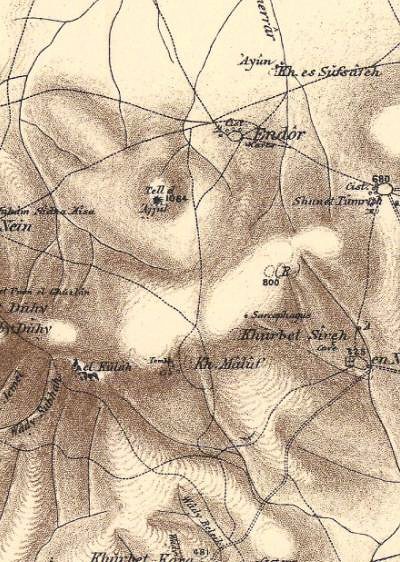 Part of Map Sheet  9 of Survey of Western Palestine,

It seems that both sites were swapped in position, since Kh. Sireh (Sahar in Hebrew) is located on the eastern slope of Givat Hamoreh, while Kh. Ma’aluf is located on a saddle east of Giv’at Hamoreh.

A cross section topographic  map of the site, generated from south-west to north-east, is seen in the illustration below. The foothills of Giv’at Hamoreh is on the left (west) side. The burial caves (15) and rock-hewn cist graves (5 ) are cut into the rock either in clusters or in single burial caves (only a few are indicated on the figure). A number of sarcophagi and their covers  are scattered on the hillside.  Agriculture installations, which include cisterns, oil and wine presses and rock-hewn cup marks, are located on the lower foothill closer to the ruins of the village. 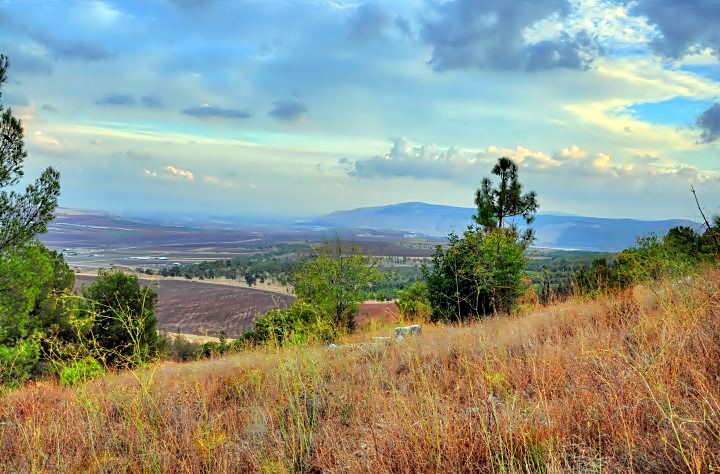 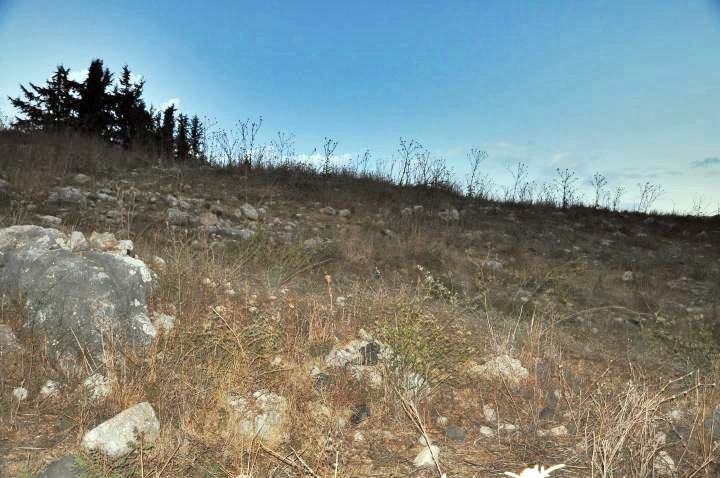 Rock-cutting was one of the sources of income in the Holy Land at these times. As per the Bible (2 Chronicles 34:11: “Even to the artificers and builders gave they it, to buy hewn stone, and timber for couplings, and to floor the houses”.

The construction of buildings and structures switched from mud (Canaanite period – Bronze Age), to un-hewn stones (Israelite period – Iron age) and then to fine cut stones (Hellenistic and Roman period).  The growing demand for hewn building blocks created thousands of small stone quarries such as the one around Kh. Sahar. The Roman period rock cuttings may have been one of the reasons why the village was established at this location.

The Crusader-Mameluke period cutting occurred when the quarry of Kh. Sahar served the stonemasons of the nearby Crusader fortress at Belvoir. Other quarries that served the construction of the fortress exist in other areas around Giv’at Hamoreh, such as in Nein (Naim). 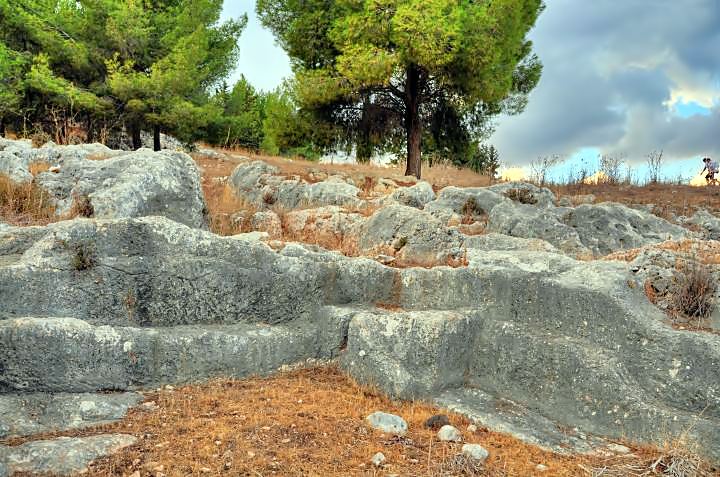 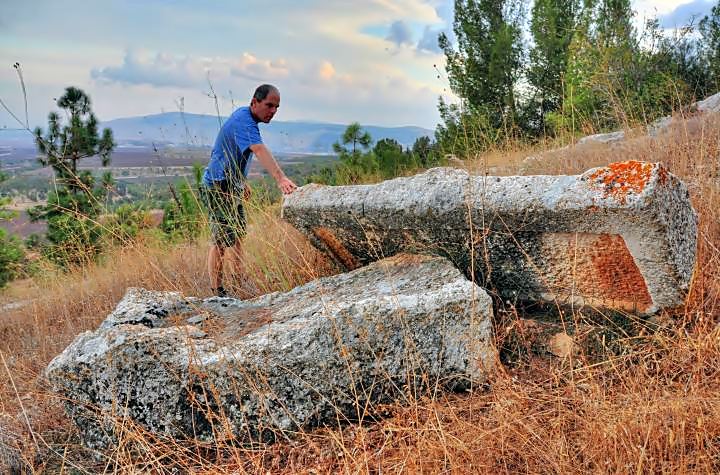 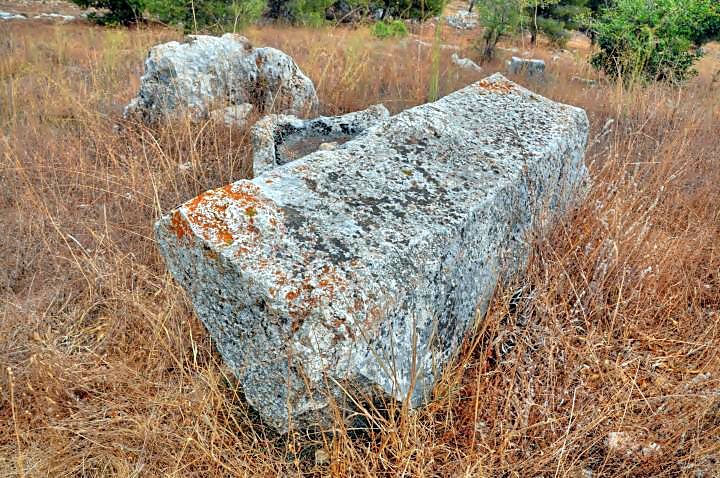 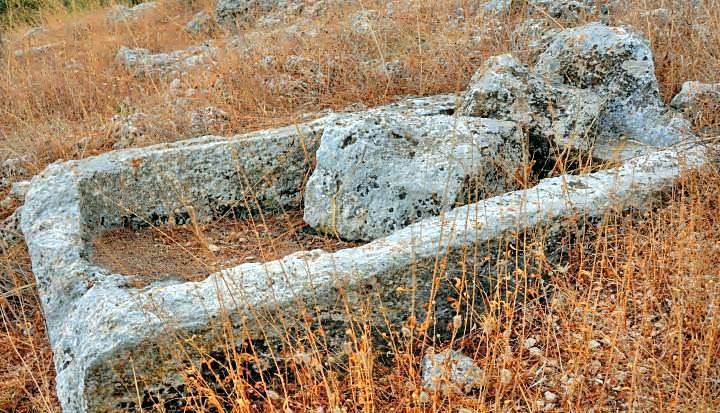 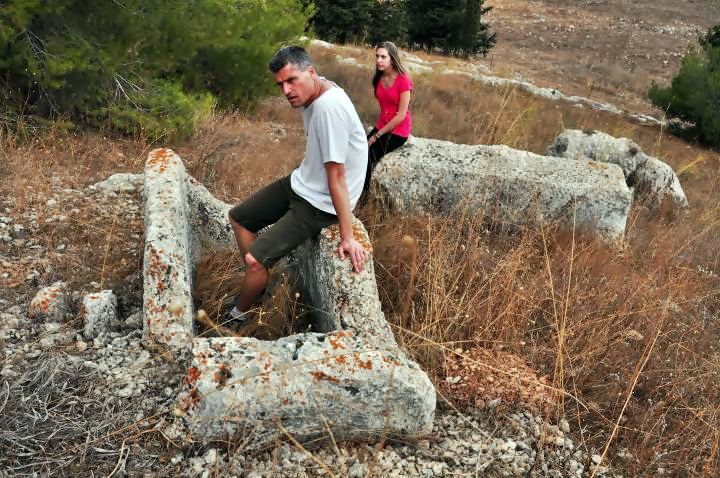 View of this sarcophagi  with Amit – towards the plains known as Ramoth-Naphtali. 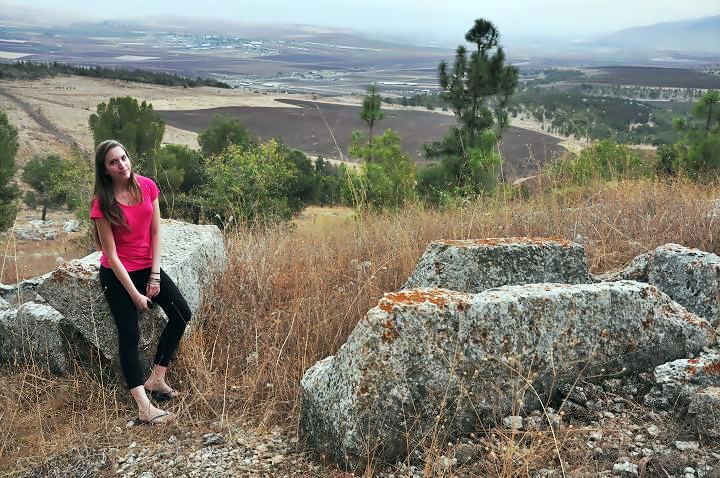 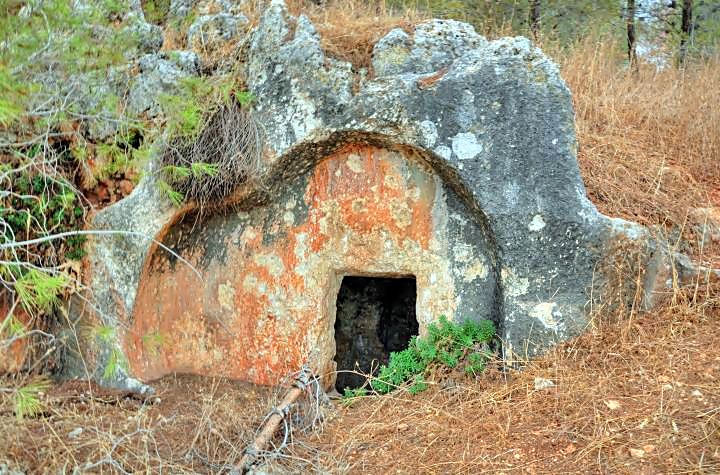 This practice of burial caves was known from early Biblical accounts, such as the cave of the Patriarchs. Genesis 23 19-20: “Abraham buried Sarah his wife in the cave of the field of Machpelah before Mamre: the same is Hebron in the land of Canaan. And the field, and the cave that is therein, were made sure unto Abraham for a possession of a burying place by the sons of Heth”. 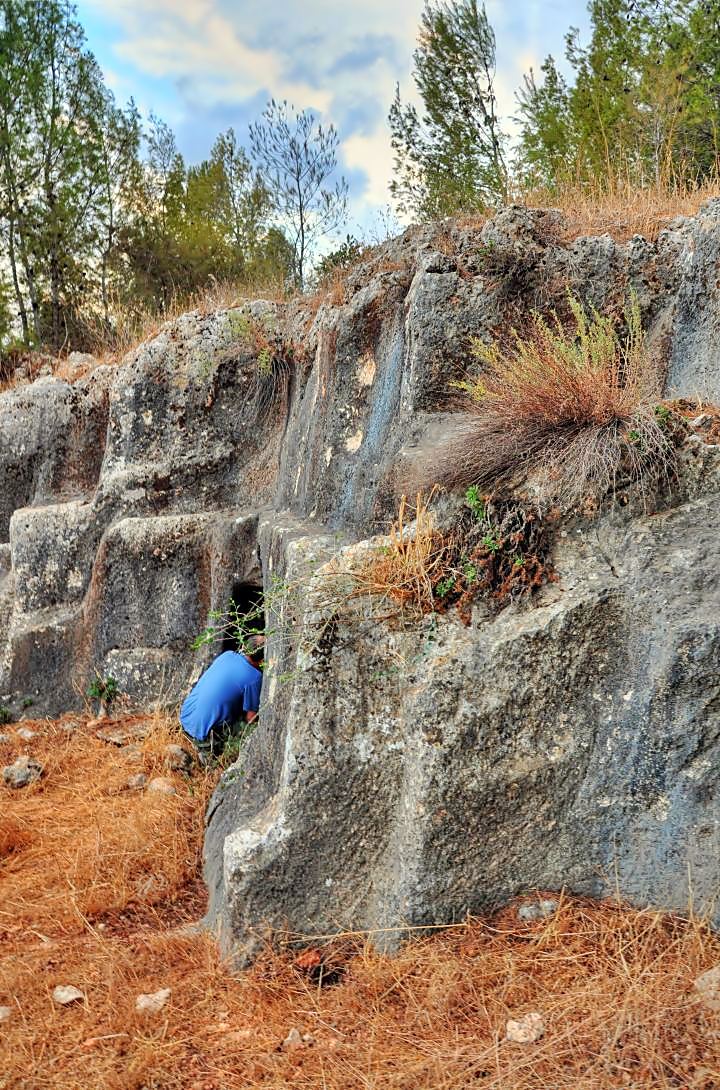 A side groove, which is seen on the left side of the entrance, is a common method to hold a blocking stone, which is now missing.  A heavy, round rolling stone was normally used as a blocking stone, and was rolled away during burial, then returned back into the groove in order to seal the tomb. As per the Bible (Matthew 28 1-2: “In the end of the Sabbath, as it began to dawn toward the first day of the week, came Mary Magdalene and the other Mary to see the sepulchre. And, behold, there was a great earthquake: for the angel of the Lord descended from heaven, and came and rolled back the stone from the door, and sat upon it”. 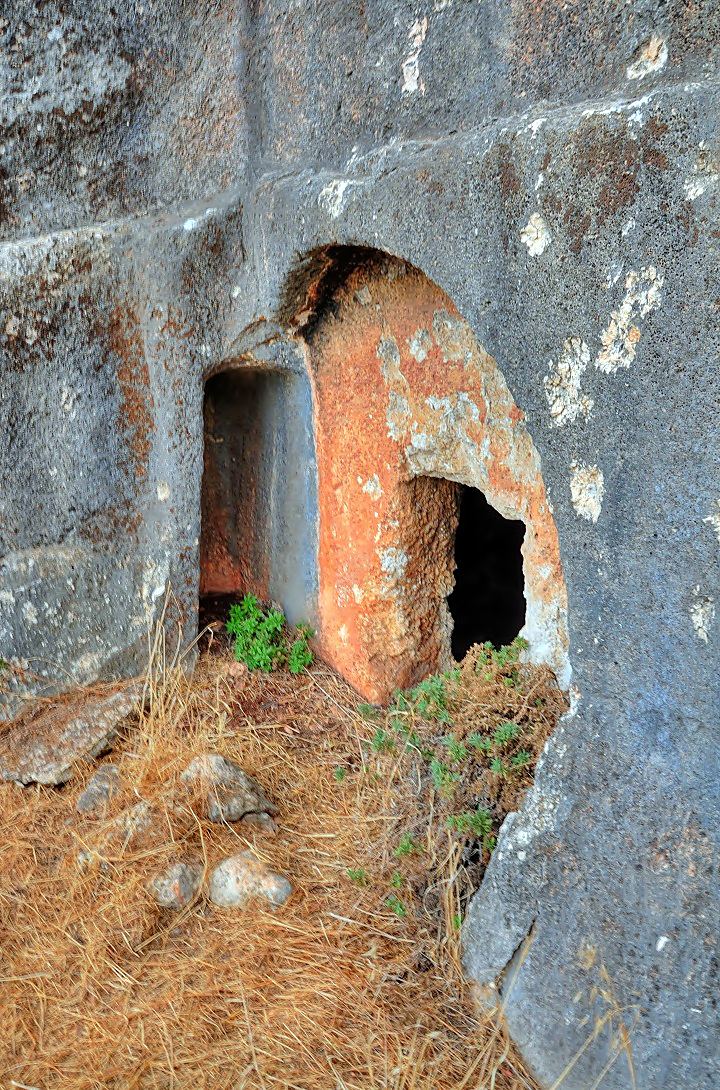 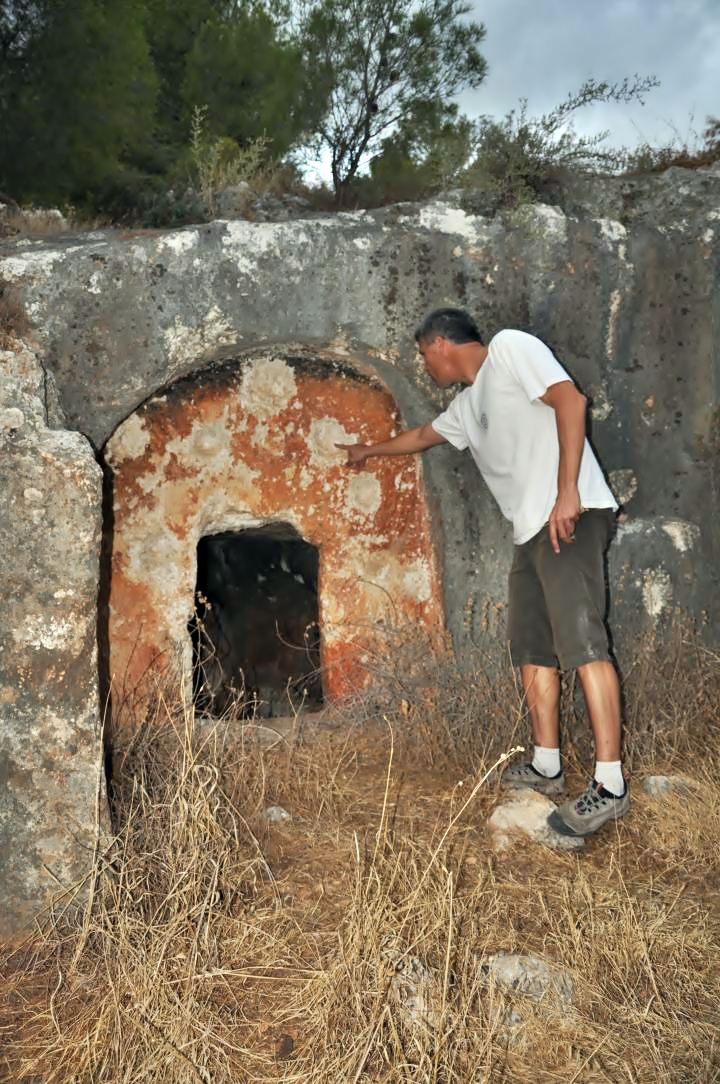 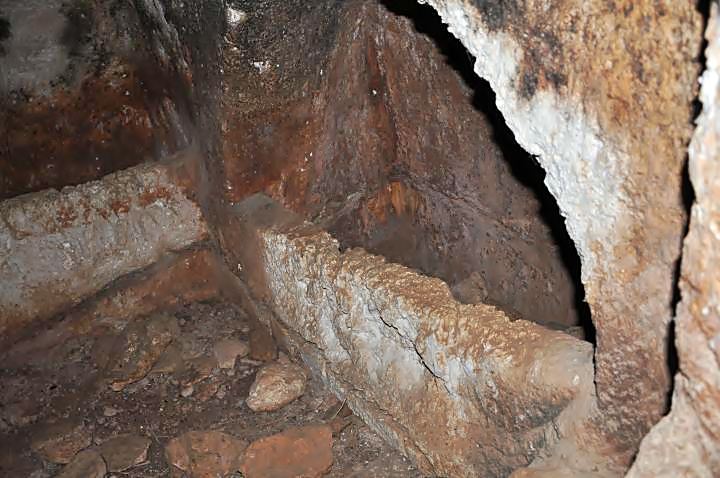 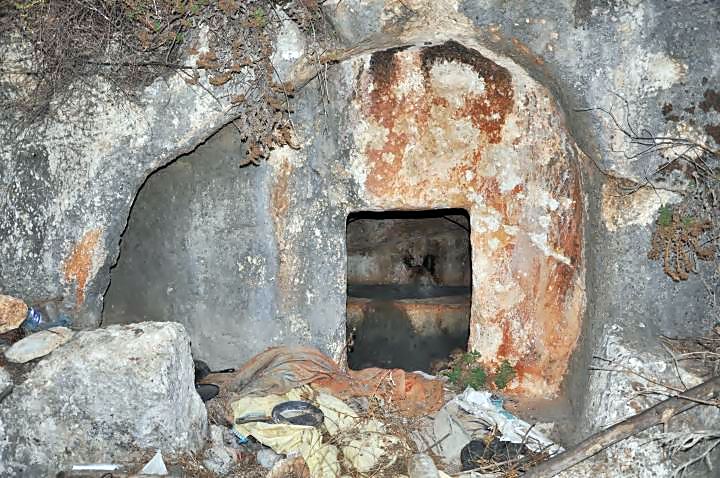 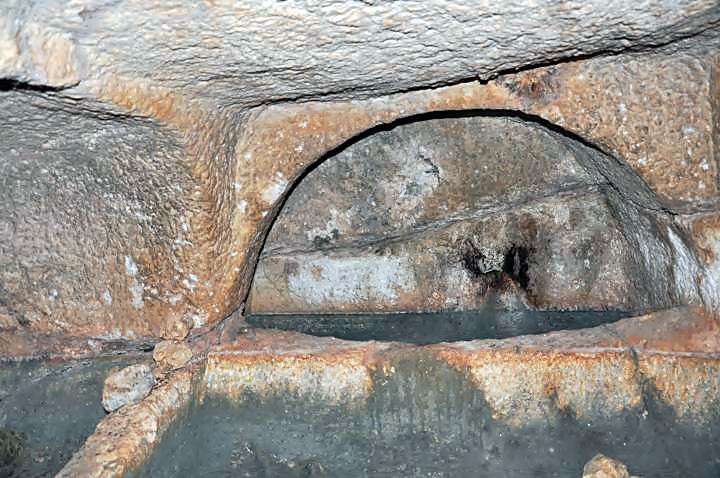 In the cemetery are other forms of rock-hewn tombs called cist-graves. Cist (from Greek “kist”) refers to a small stone-built coffin-like ossuary (box) which is used to hold bodies of the dead. There are 7 such rock-hewn graves  in this site. 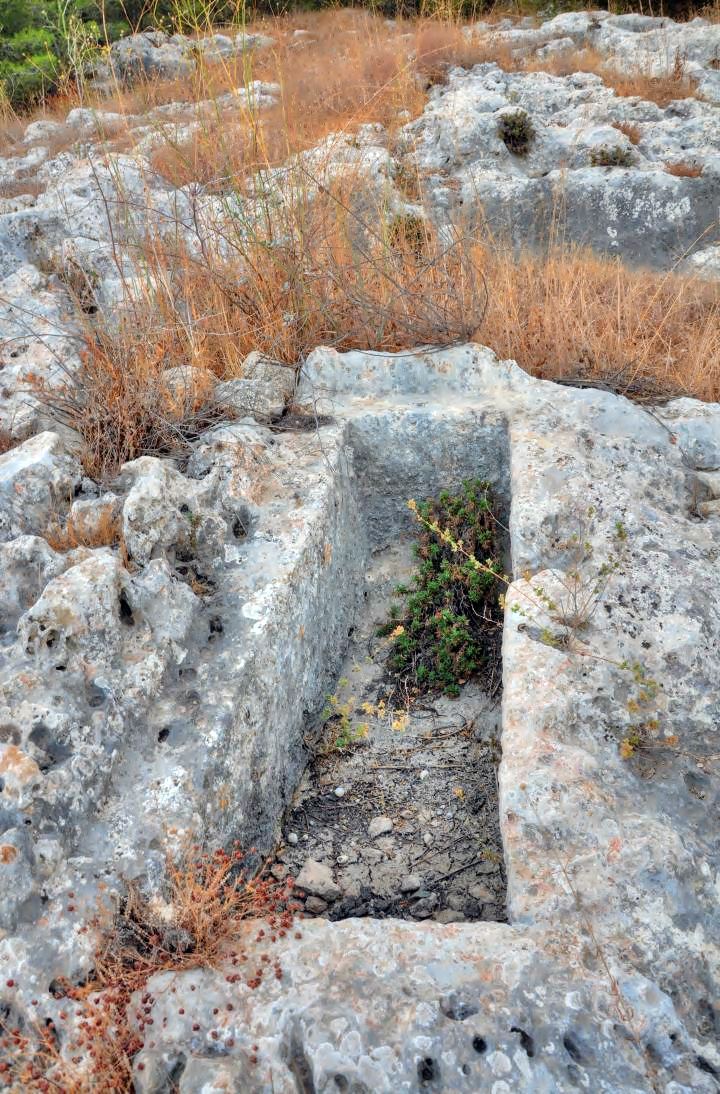 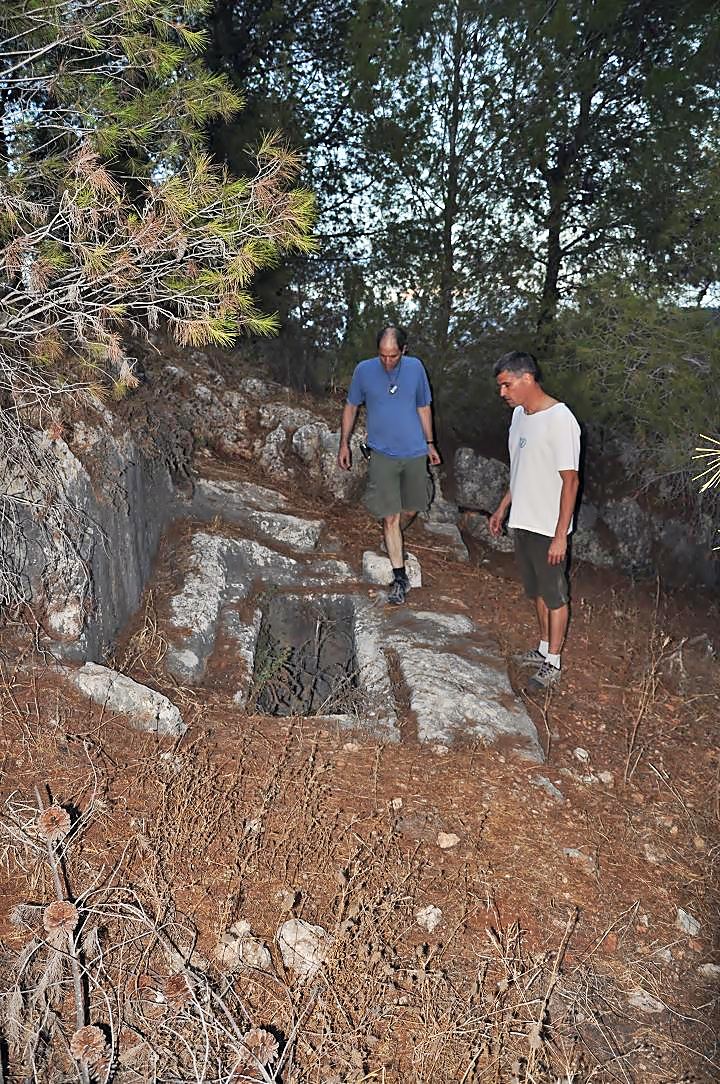 A closer view of this cist grave is in the photo below.  The stone lid, which once covered the tomb, is missing – but its fitting grooves are seen on the side of the cavity. 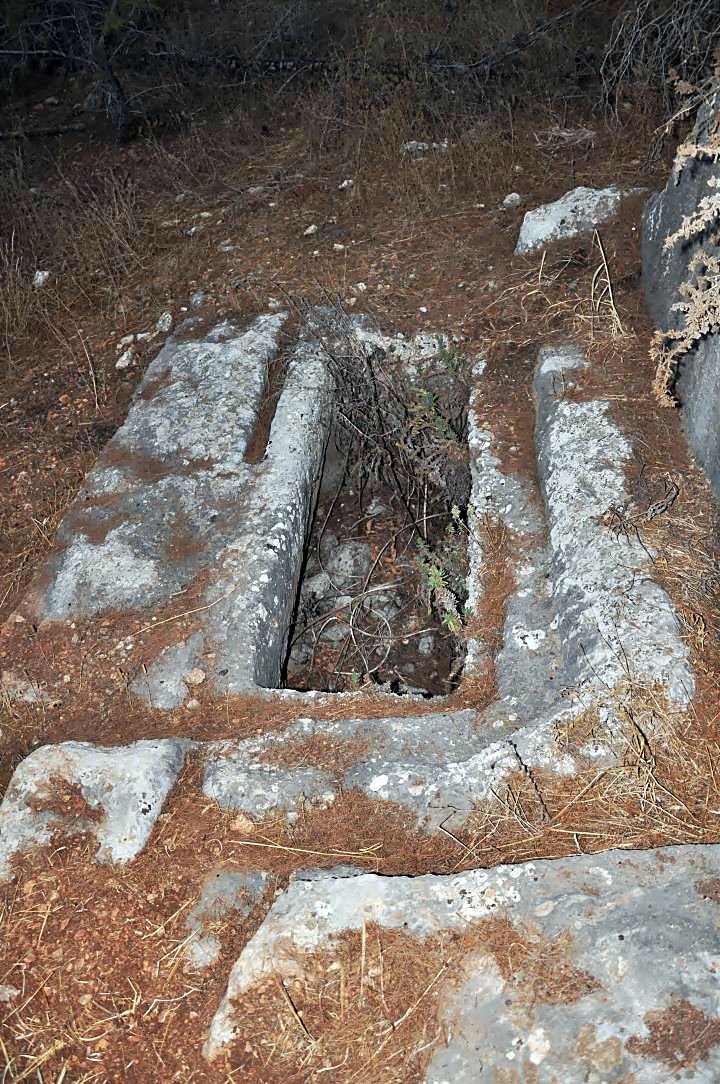 Cist graves were not common in the Biblical period. The majority of Israelites were buried in simple, shallow graves, with or without a heap of stones. The Bible does report on some prominent people who were buried in a box, such as Joseph (Genesis 50 26: “So Joseph died, being an hundred and ten years old: and they embalmed him, and he was put in a coffin in Egypt”). This practice started at a later date, and was common in the Hellenistic and Roman periods. 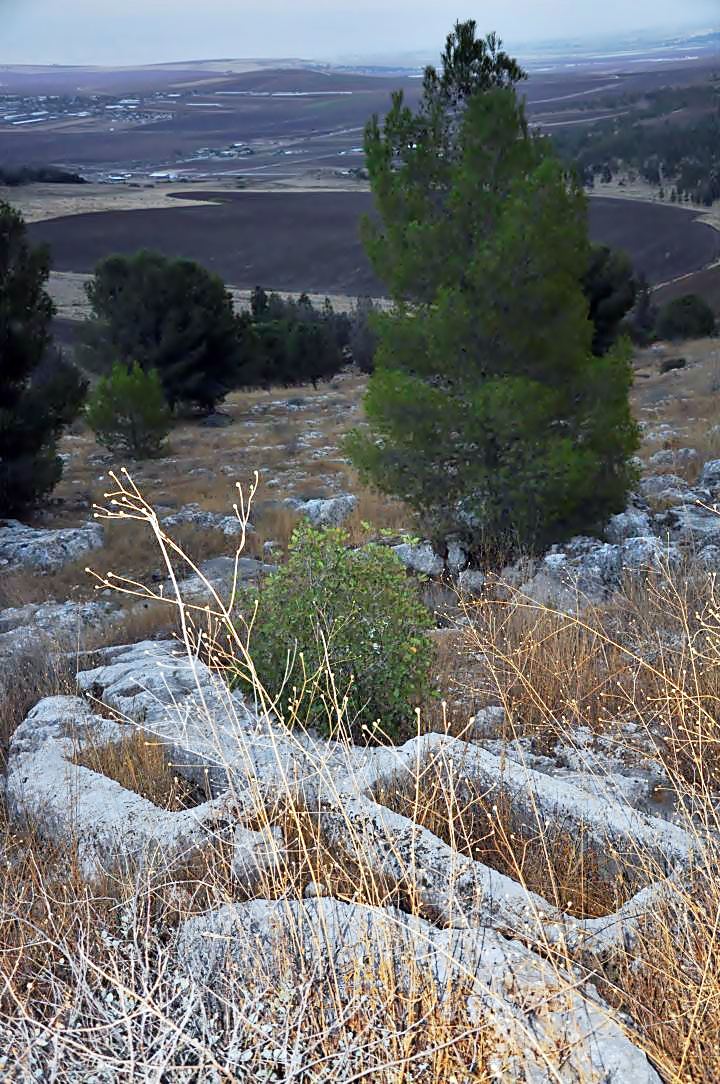 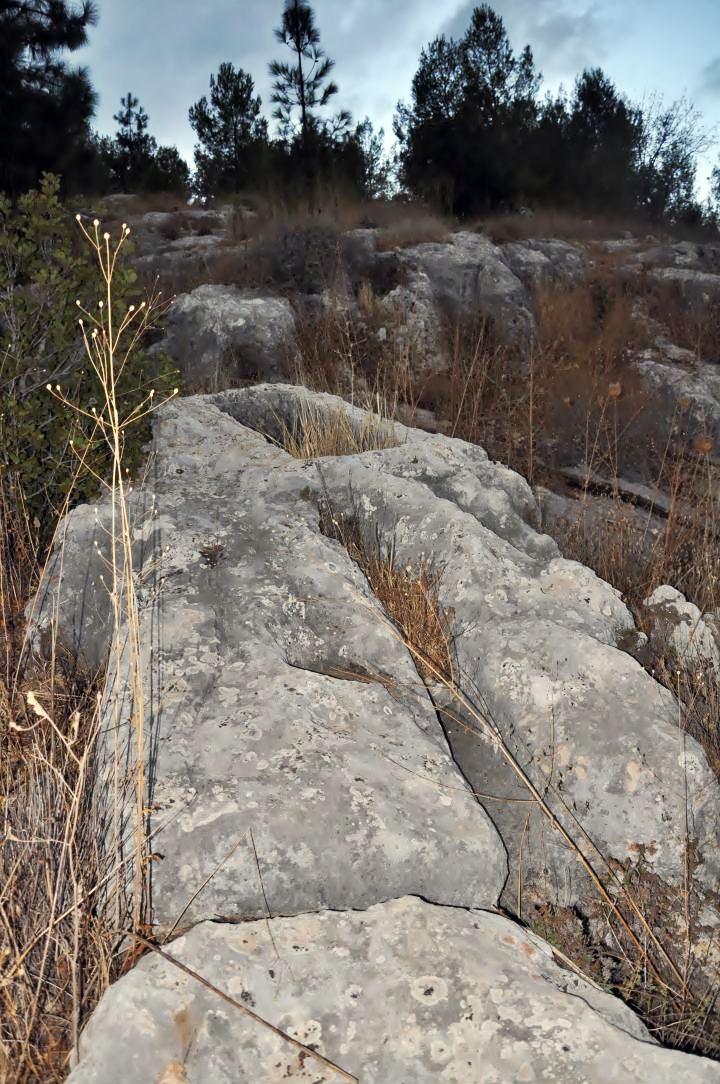 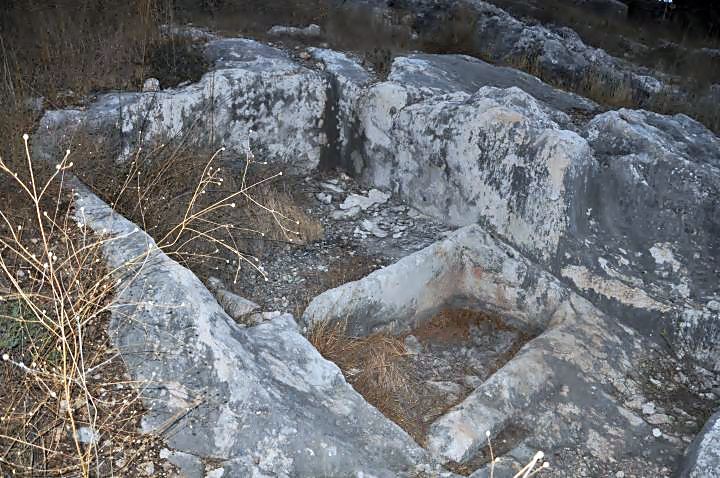 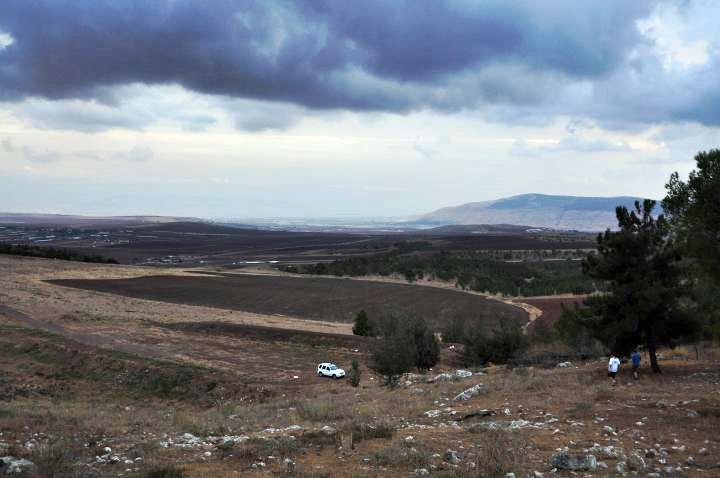