The tomb of Rachel, wife of  Patriarch Jacob, is located on the way to Bethlehem where she died at childbirth, giving birth to Benjamin. The site is visited by tens of thousands of people every year, especially Jewish women unable to give birth or who pray for the health of their children.

Genesis 35:19: “And Rachel died, and was buried in the way to Ephrath, which is Bethlehem”.

An aerial map is shown here, indicating the major points of interest around the site. The tomb was located on the side of the ancient road from Jerusalem to Bethlehem, 2km north-north-west of the center of old city of Bethlehem. It is now within an enclosed secured area. The tomb can be reached by private cars, with a large parking place, or by bus service from Jerusalem’s central bus station. 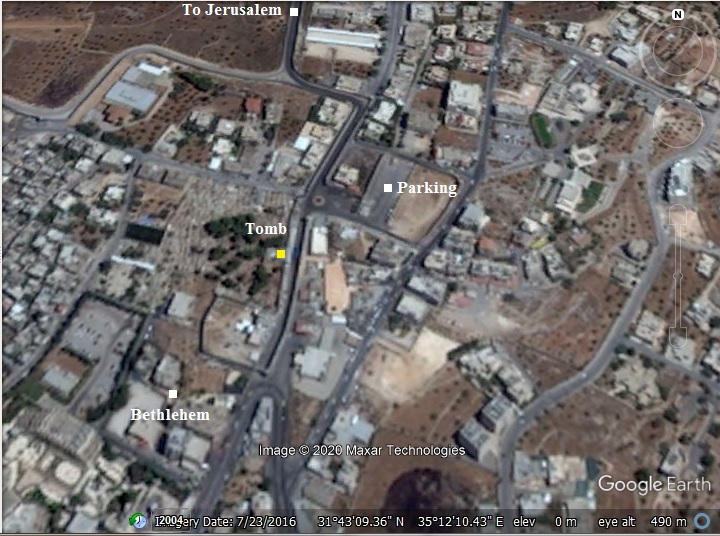 Rachel, a Biblical figure, was one of the two wives of Jacob, and mother of Joseph and Benjamin.  She was a daughter of Laban and Adinah, and sister of Leah – Jacob’s first wife.Genesis 29: 16-17:

Jacob met Rachel at Laban’s field, while he was tending his uncle’s flocks in Haran. Genesis 29:10-12: 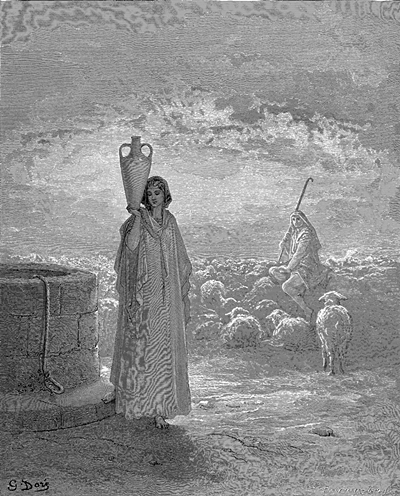 Jacob requested Laban’s permission to marry Rachel, but Laban insisted that he first works for him 7 years.

“And Jacob loved Rachel; and said, I will serve thee seven years for Rachel thy younger daughter”.

After the seven years, Laban tricked him, requiring Jacob to first marry her elder sister, Leah. He was allowed to marry Rachel as his second wife only on the condition of 7 more years of labor.

Rachel was first unable to conceive (“Rachel saw that she bare Jacob no children”). She was desperate to have children (Genesis 30:1):

“And when Rachel saw that she bare Jacob no children, Rachel envied her sister; and said unto Jacob, Give me children, or else I die.”

Finally, with the help of God, she gave birth to her first son Joseph.

“And God remembered Rachel, and God hearkened to her, and opened her womb”.

Rachel’s woes continued with her second pregnancy, when she traveled with her family from Bethel, north of Jerusalem, to Bethlehem on the south. On this way, known as the ‘Way of the Patriarchs’ (it closely follows modern highway #60), she gave birth to her second son, Benjamin, but died during childbirth. She was buried on this way. (Genesis 35:19):

“And Rachel died, and was buried in the way to Ephrath, which is Bethlehem”.

A map of the area around Jerusalem is shown here. Jacob and Rachel were on the journey from Bethel in the north to Bethlehem (aka, Ephrath). According to the tradition, she died and was buried just north of Bethlehem, at the location marked by an orange star. 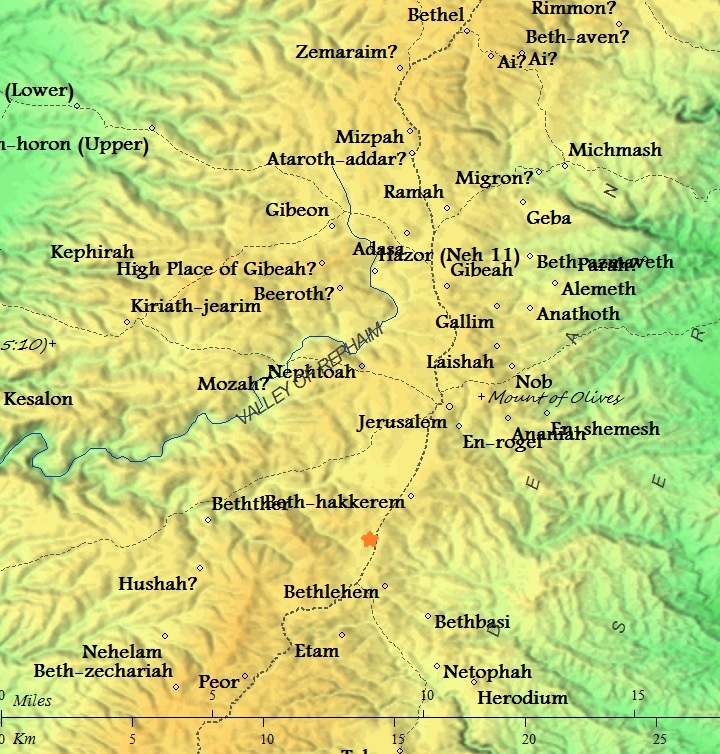 Map of the area around Jerusalem,  from the Canaanite/ Israelite periods to the Roman period (based on Bible Mapper 3.0);

The tradition of Rachel’s burial place has been for more than 1500 years in a site on the outskirts of Bethlehem, along that road. A small structure was constructed there, which in years was expanded.

An old photo of the tomb, taken in 1890, shows a the tomb at the side of the road to Bethlehem. 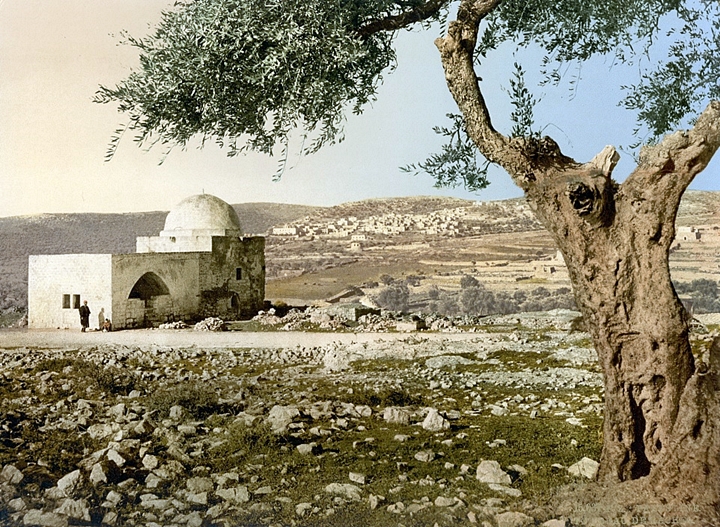 The area was examined in the Palestine Exploration Foundation (PEF) survey (1866-1877) by Wilson, Conder and Kitchener. This map is part of sheet XVII of their survey results, with the tomb marked as Kubbet Rahil (‘Dome of Rachel’). 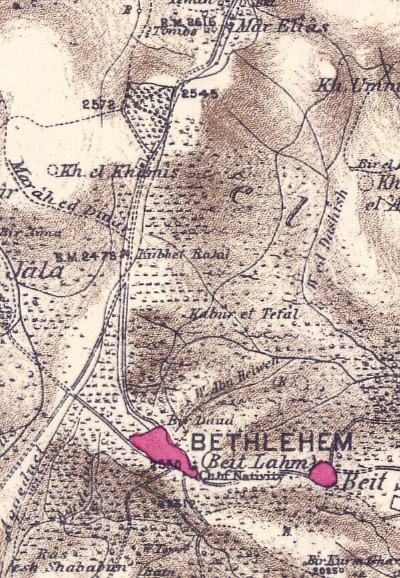 ”Kubbet Rahil (M u).—A modern Moslem building stands over the site, and there are Jewish graves near it. The Kubbeh is now a square building, with a court on the east. ‘ The original building (as represented in some of the older views) was open, with four arcades (one on each face) supporting the dome. These have been filled in except on the east, where a second chamber has been built on”.

Their description of the structure:

”The original square building measures 23 feet side, the arcades having a span of 10 feet. The height is approximately 20 feet, not including the dome, which rises another 10 feet. The chamber added to the east measures 13 feet east and west, by 23 feet north and south, externally. The covered court, east of this again, has a window and a mihrab on the south, and a double window on the east. On the north is a low wall. The court measures about 23 feet square, and is used as a praying-place by Moslems. The inner chambers, entered by a door, of which the key is kept by the Jews, are visited by Jewish men and women on Fridays. The inmost chamber under the dome contains a cenotaph of modern appearance”. 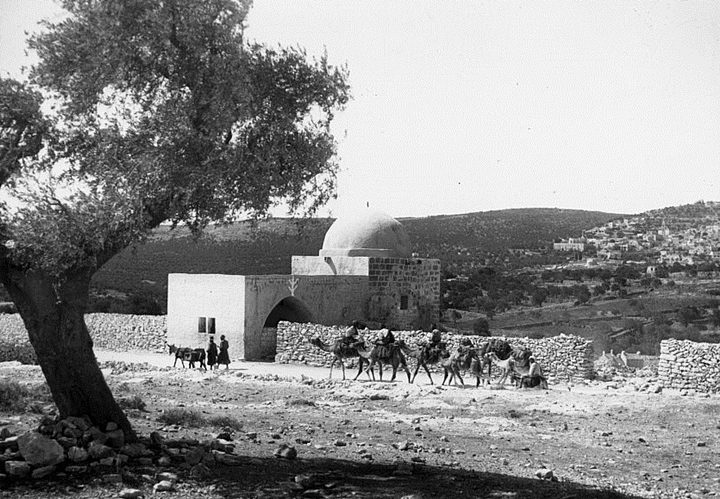 They continued with a history of the site:

“A monument on this spot is constantly mentioned from the year 333 A.D. In 700 A.D., Arculphus speaks of a pyramid on the site. In 1172 A.D. Theodoricus calls this place Chabratha—a very old error, arising from mistranslation of the Hebrew rendered ‘a little way’ in the Authorised Version. (Genesis xxxv. 16.) The LXX renders the word Hippodrome, whence Rachel is said by Origen to have been buried in the hippodrome of Ephrata. (Cf Theodoretus as quoted by Reland, s.v. Caphratha, vol. ii. p. 704.) Aquila renders the word mas, ‘ by the road-side,’ which agrees well with the position of the present site.

The pillar erected by Jacob has disappeared; but there is no reason to doubt the genuineness of the tradition, in which Jew, Moslem, and Christian agree. Rachel’s tomb was in the border of Benjamin (i Samuel x. 2), near Bethlehem (Genesis xxxv. 16). Josephus places Rachel’s tomb ‘over against Ephrata.’ (Antiq. i. 21, 3.) In 1 63 Benjamin of Tudela speaks of the monument as constructed of eleven stones, and covered by a cupola on four pillars. Sir John Maundeville in 1322 speaks of twelve stones. For the curious tradition of the ‘field of peas’ see Section C. Theodoricus, who is the first to allude to it, speaks of Rachel’s monument (in 1172) as a pyramid—as in 700 a.d. In 1333 A.D. Isaac Chelo mentions the twelve stones and a stone cupola. In the ‘Jichus ha Aboth ‘ a sketch of the monument is given. (1537 A.D.) It is represented as a square building with arcades and a cupola. It appears probable that the oldest part of the present structure may date back as early as the twelfth century, but the second chamber to the east and the outer court are additions within the present century, at which time also the arcades were probably filled in. Rachel’s tomb was visited several times by the Survey party, the latest visit being in May, 1882”. 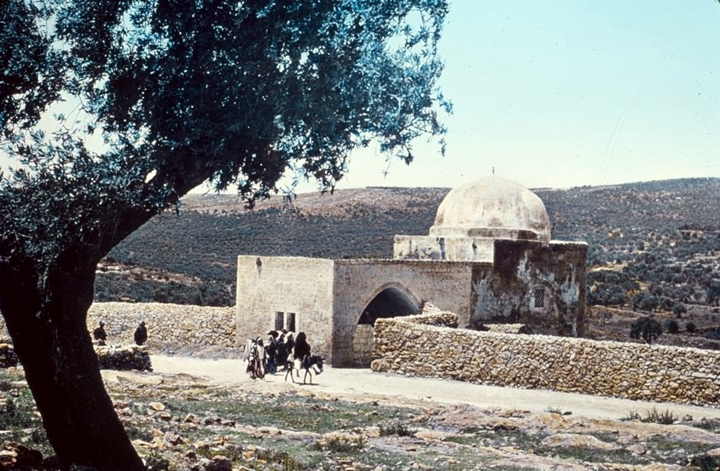 Yet another photo shows an interesting historic finding. The upper aqueduct to Jerusalem passed near Rachel’s tomb. Sections of  drums, belonging to the Roman aqueduct which fetched water from the Solomons’ pools to the Temple. These modular units were connected to each other, plastered at the joints – thus creating a sealed pipe. This enabled the use of a siphon to move the water across the valley, using pressure. It conveyed the water over 2-3 Km, from a lower height of 740m to a higher height of 780m. 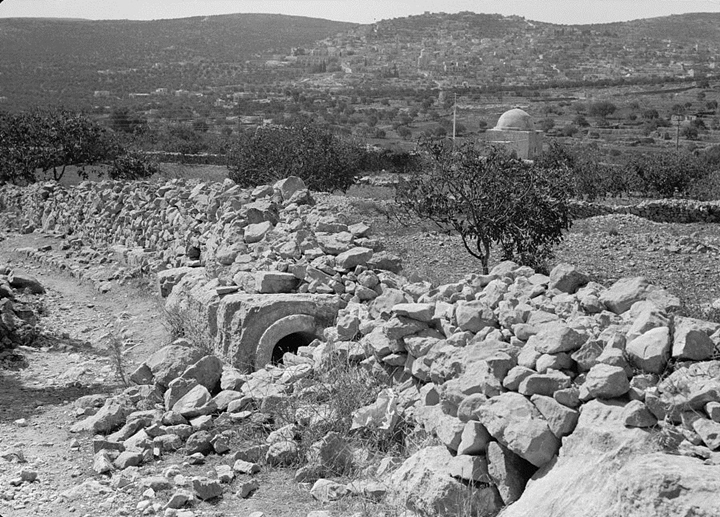 Tomb of Rachel is open to the public, and is a popular religious site. Approach it from Hebron road that passes the monastery of Mar Elias, then turns west and south around the north west corner of Bethlehem.

The tomb is located on the north west corner of Beth Lehem, 2km south of Kibbutz Ramat Rachel on the southern outskirts of Jerusalem.

Orna stands here on the side of the entrance. In the background, behind the walls, are houses of the outskirts of Bethlehem. 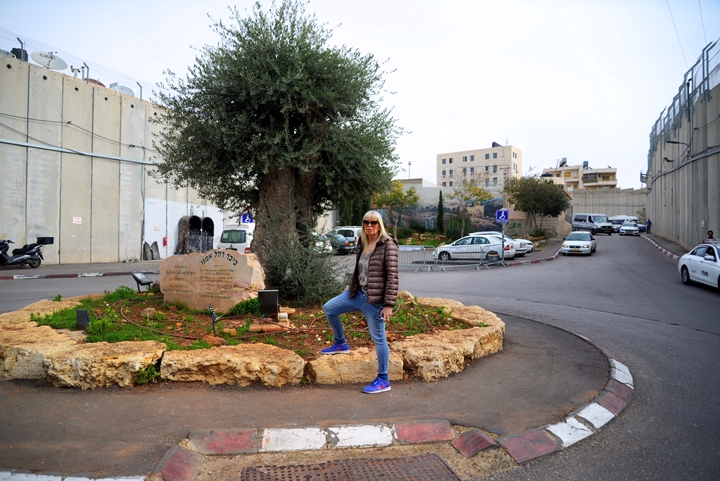 The compound is an enclosed area, squeezed between high walls and towers that protect the visitors.The site was attacked numerous times in recent years, forcing strict security measures. It is safe now. 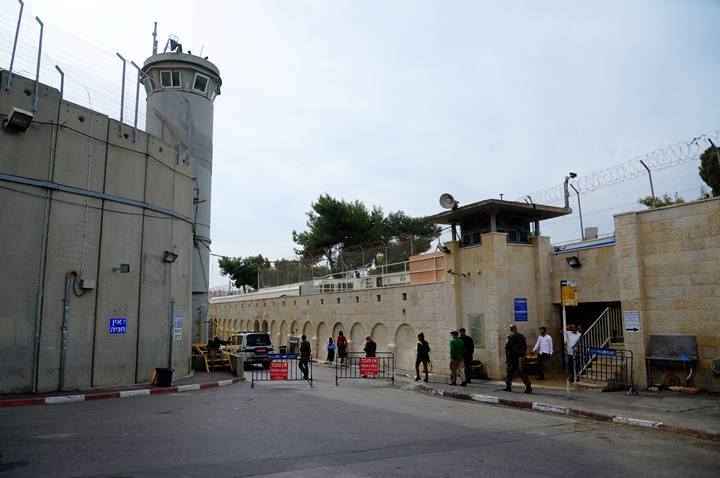 On one of the walls are Biblical references to the event of the death of Rachel in childbirth on the road to Bethlehem (Ephrath). 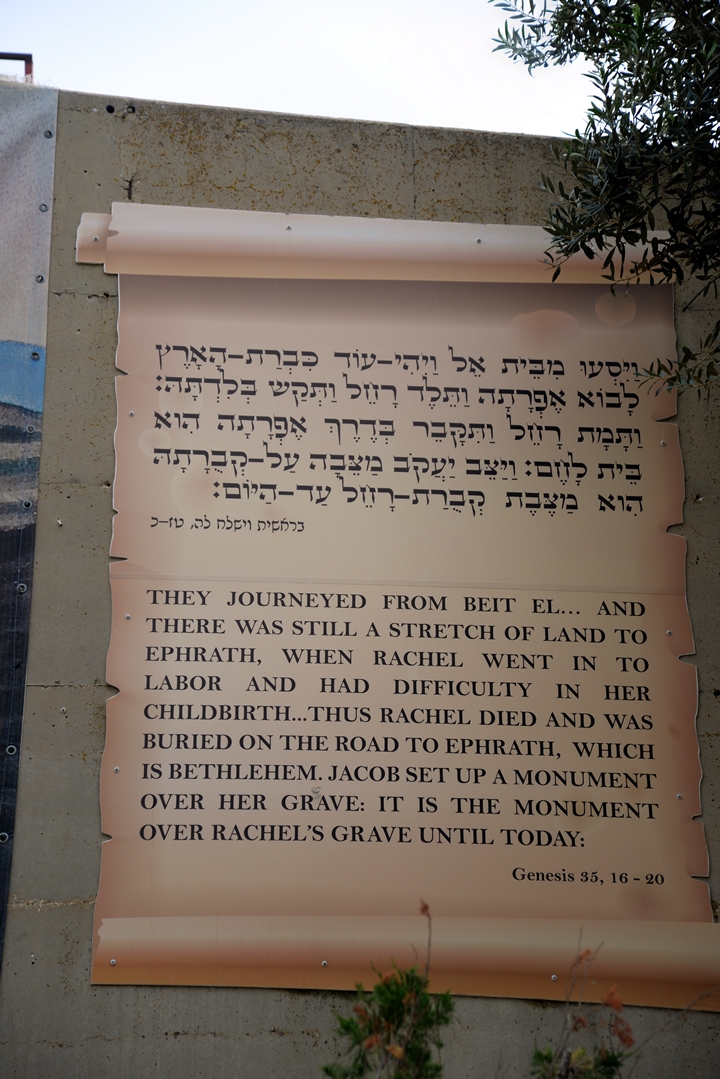 A new structure was built, encompassing the structure of the old tomb.

There are two entrances – for men (in the front – “גברים”) and women (“נשים”). This segregation is required from religious reasons. 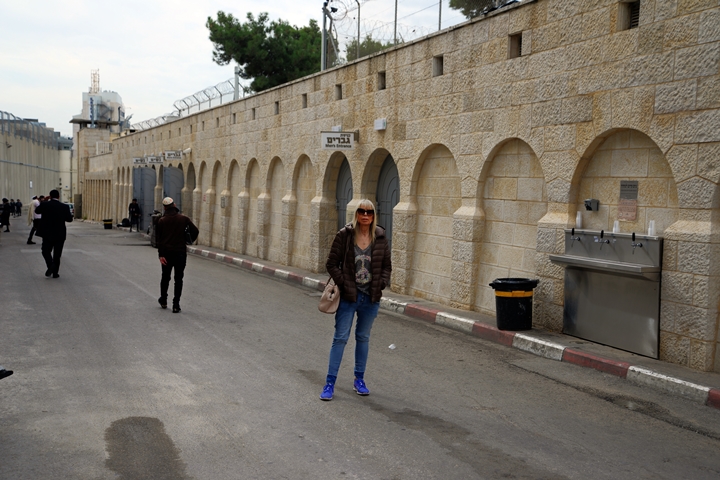 The old tomb was embedded  inside the modern structure. Two sebils (Ottoman drinking fountains)  that once stood outside the old tomb are now standing inside. The photo below shows the right one. These sebils, as well an additional room,  were donated by the banker Moshe Montefiori in the 19th century. 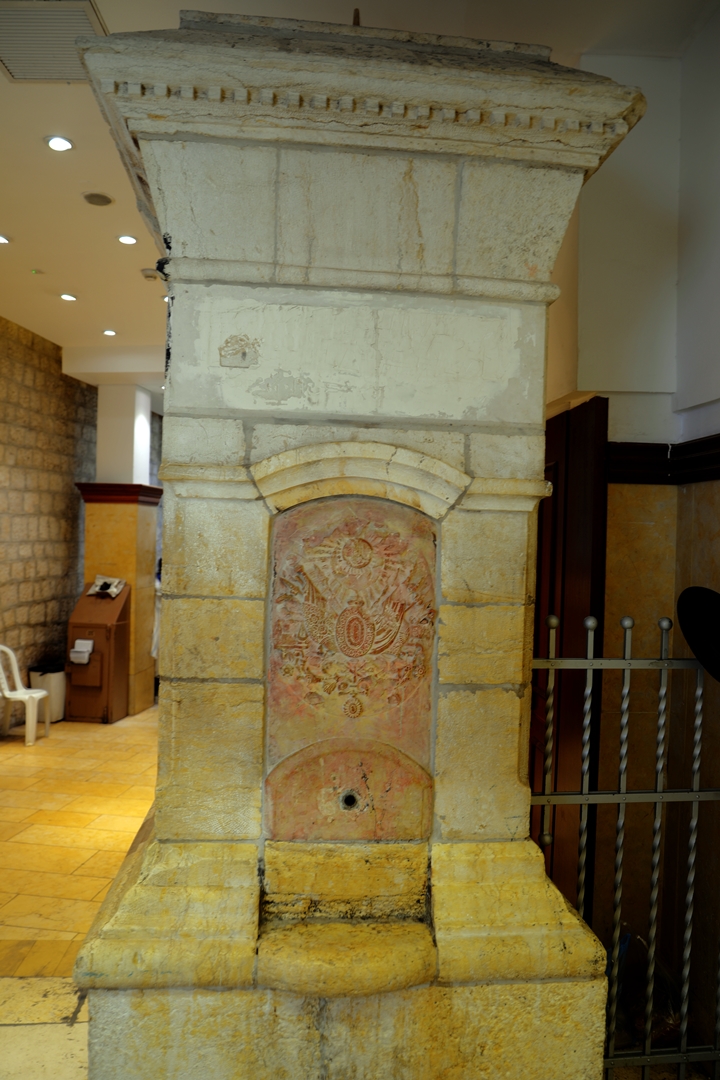 The shrine is shared, from separate sides, by men and women who come to pray here. 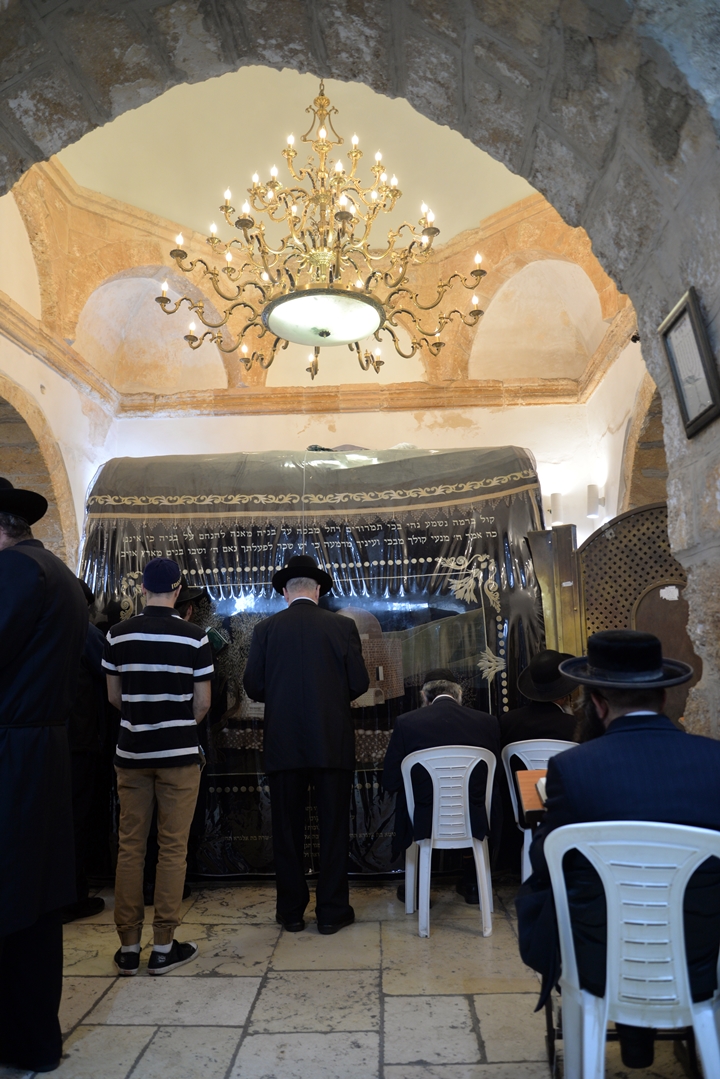 Rachel’s tomb, although heavily surrounded by walls, does leave a special sense of holiness to people who come here with pain trying to get some comfort. For those people, the visit indeed helps healing their soul to some degree. Hopefully, the spirit of Rachel, who is “weeping for her children”, also brings them health and cure.

“And they journeyed from Bethel; and there was but a little way to come to Ephrath: and Rachel travailed, and she had hard labour. And it came to pass, when she was in hard labour, that the midwife said unto her, Fear not; thou shalt have this son also.And it came to pass, as her soul was in departing, (for she died) that she called his name Benoni: but his father called him Benjamin.And Rachel died, and was buried in the way to Ephrath, which is Bethlehem.And Jacob set a pillar upon her grave: that is the pillar of Rachel’s grave unto this day.”

Rachel was so desperate to have children:

“And when Rachel saw that she bare Jacob no children, Rachel envied her sister; and said unto Jacob, Give me children, or else I die.”

Jeremiah said that Rachel was figuratively weeping because of the loss of the people:

“Thus saith the LORD; A voice was heard in Ramah, lamentation, and bitter weeping; Rahel weeping for her children refused to be comforted for her children, because they were not”.