For the review of the upper and lower cities of Tel Maresha, and a history of the city,  visit the Tel Maresha page.

An aerial map of Tel Maresha is illustrated here, with indication of the major points of interest. This section is part of the large Beit Guvrin-Maresha national park. 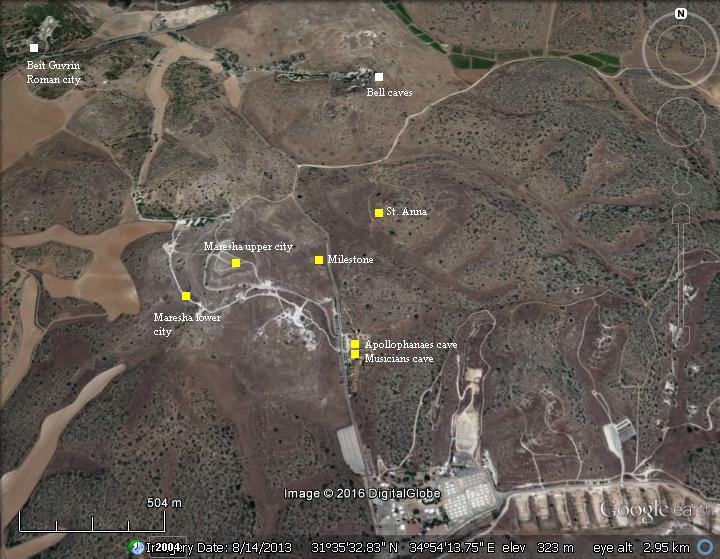 (a)  Cave of the Musicians

The Southern of the Sidonian caves is named “the Musicians” cave, after the illustrations depicting musicians that decorated the cave. It is dated to the Hellenistic period (2nd century BC). 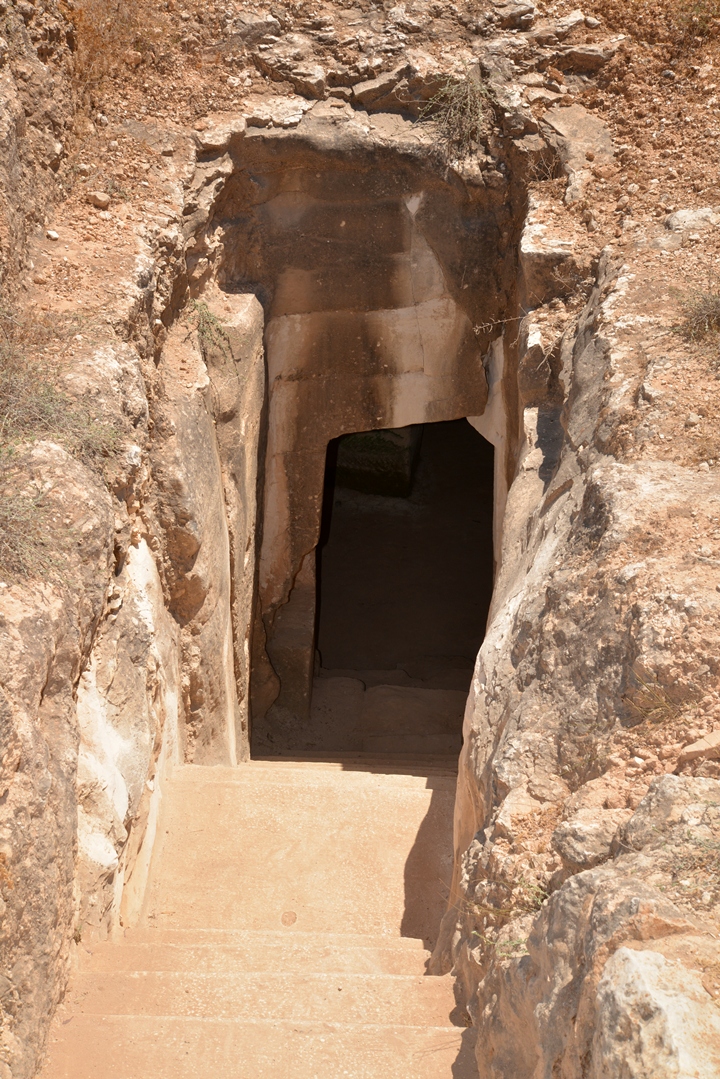 After descending to the cave level,  there is a small square middle chamber, or antechamber, which opens to three chambers of the tomb – 2 small on the sides,  and a long chamber straight ahead which is seen in the photo below facing the entrance.

An illustration here shows the arrangements of the chambers and burial places (“Painted tombs in the Necropolis of Marissa-Maresha”, p. 30, cave “II”, drawn by the PEF survey). 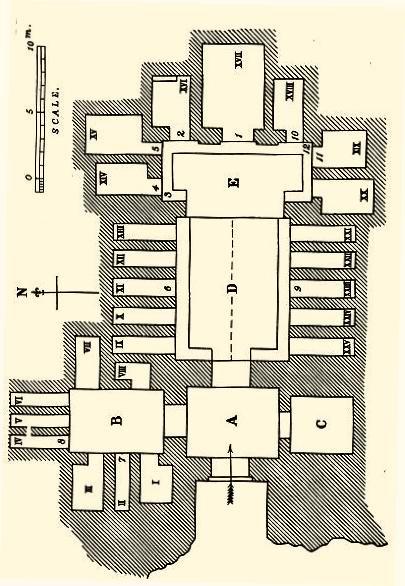 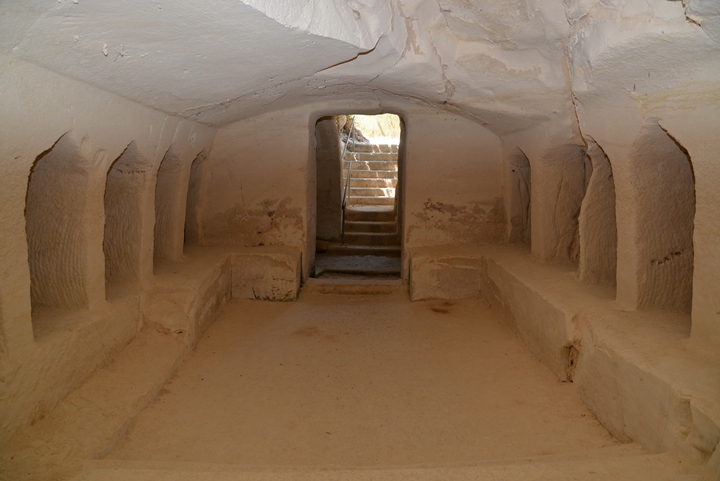 At the end of the long chamber are 7 sarcophagus chambers. 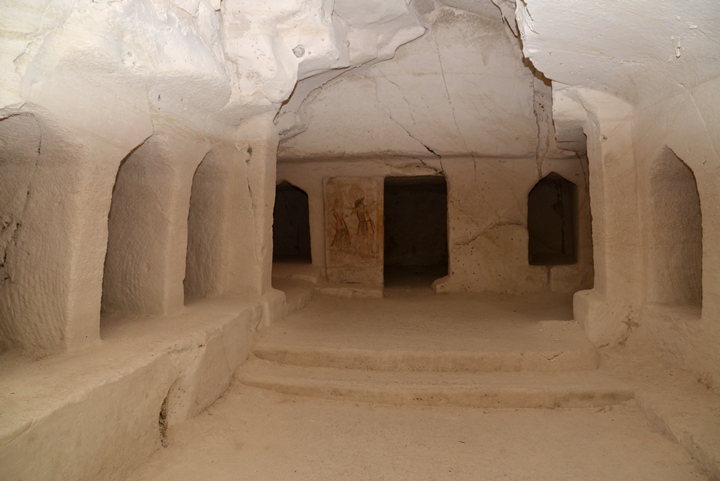 To the left of the central chamber is a painting of musicians, which gave the name to this family cave. 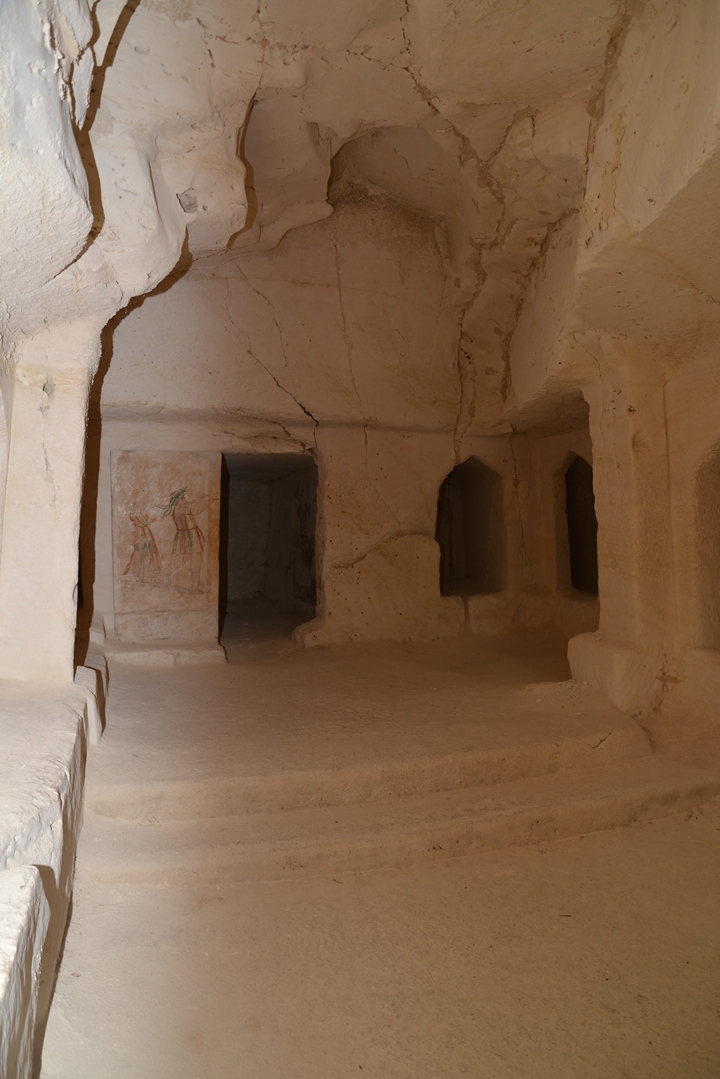 A larger detail of the musicians illustration is below. It is painted on stucco (coating plaster). The illustration shows two musicians – a youth blowing a double pipe, and a maiden that follows him playing on a small harp. Both are advancing towards the door of the chamber, cheering and honoring the dead. 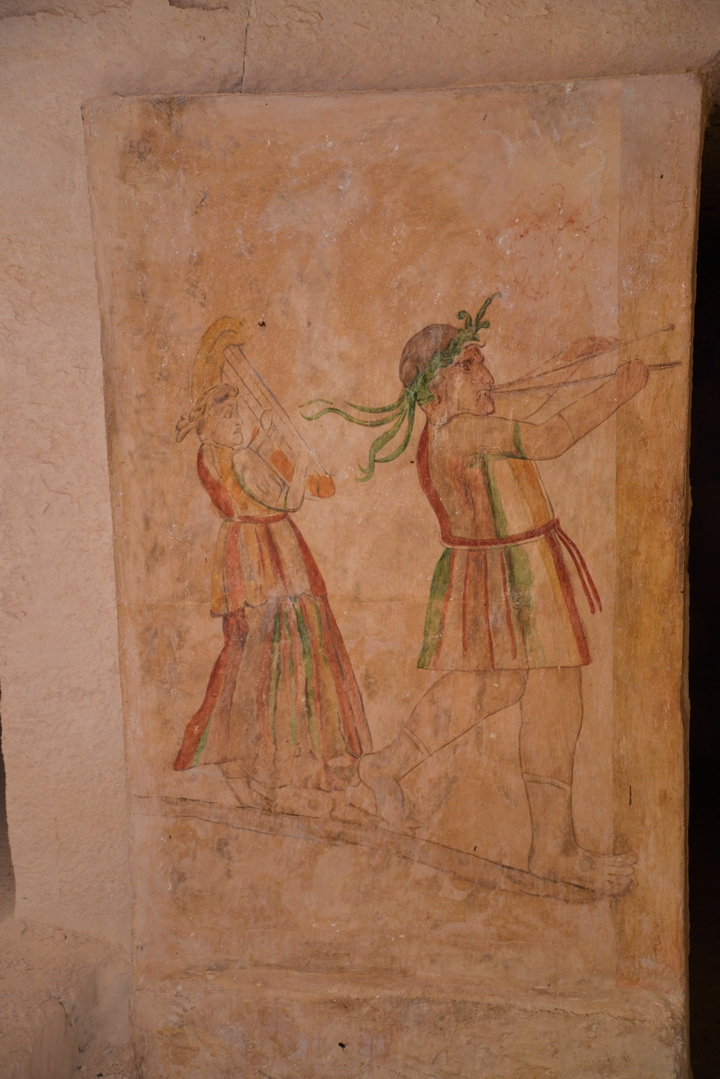 Other sections of the burial complex is seen in the following photo. The cave was illustrated with other paintings, but they have not been reconstructed. 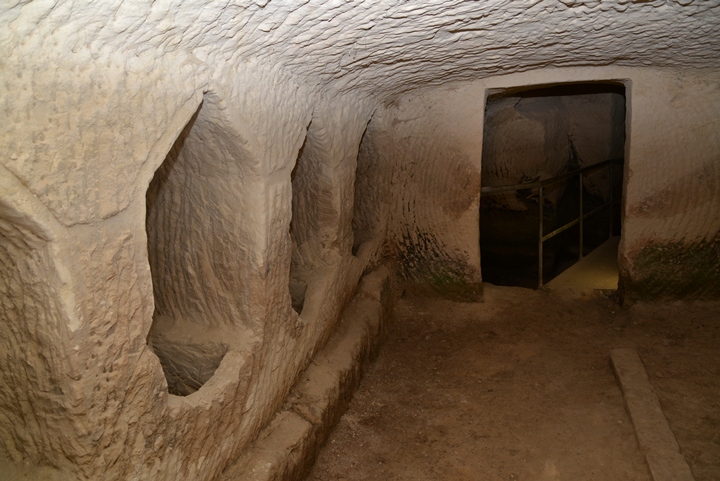 The northern of the two Sidonian burial caves is named after the person whose name was found inscribed inside the burial cave – Apollophanaes son of Semaios.  It is larger and earlier than the Musicians cave.

A staircase leads down to the entrance of the tomb, located on the western edge of the burial complex. A three-lined Greek inscription was written above the doorway, but the letters could not be deciphered. 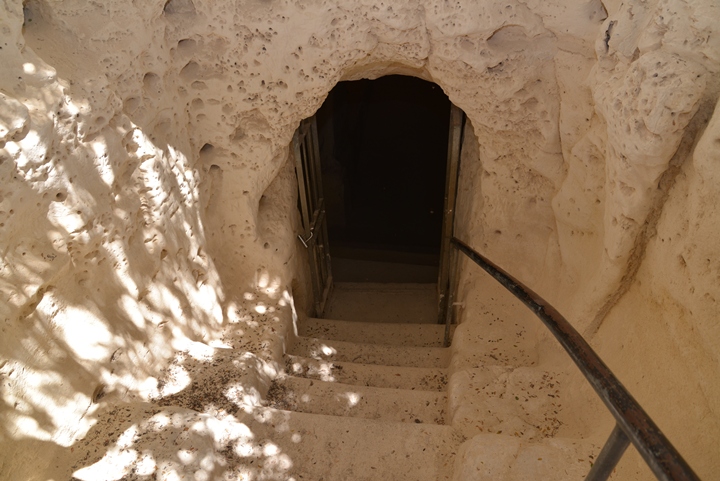 Beyond the entrance is a square middle chamber, or antechamber, which opens to three large  oblong chambers of the tomb.

The middle entrance chamber is seen in the following photo. On the left side is an altar, and above it is a painting of a cock. 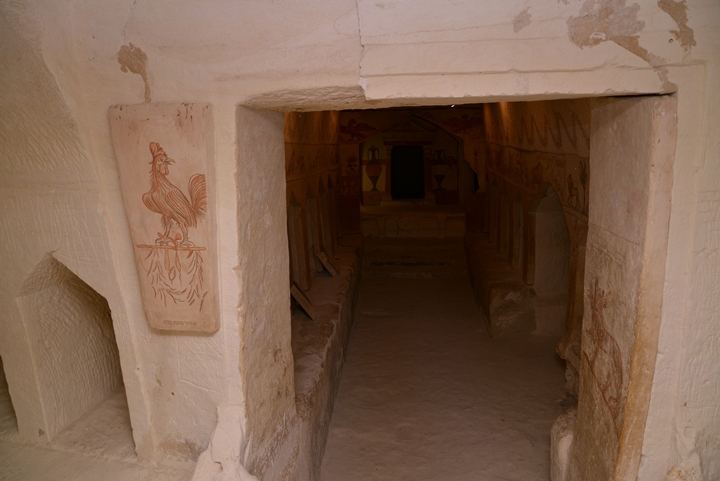 Along the walls of the three long chambers, which are arranged in the shape of a cross, are 41 niches cut into the rock – the loculi (kokhim). Each of the loculi is about the same size (140 cm high, 72 cm wide, 240cm long), with the exception of three loculi on the right side of the entrance, which are shorter  (112 cm). In addition, there are 3 more sarcophagus chambers at the end  of the center chamber.

An illustration of the cave structure is shown here on the right (“Painted tombs in the Necropolis of Marissa-Maresha”, p. 16, cave “I”, drawn by the PEF survey). 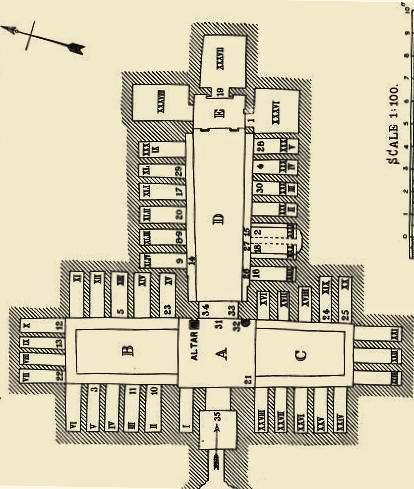 The niches served as temporary resting places for the deceased. The bones were later removed, thus allowing a repeated use of the niches for new burials. The northern chamber, to the left of the entrance, is seen in the following photo. 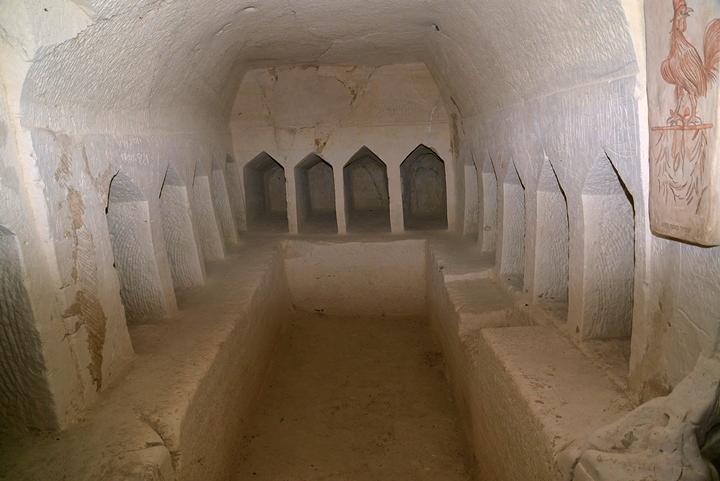 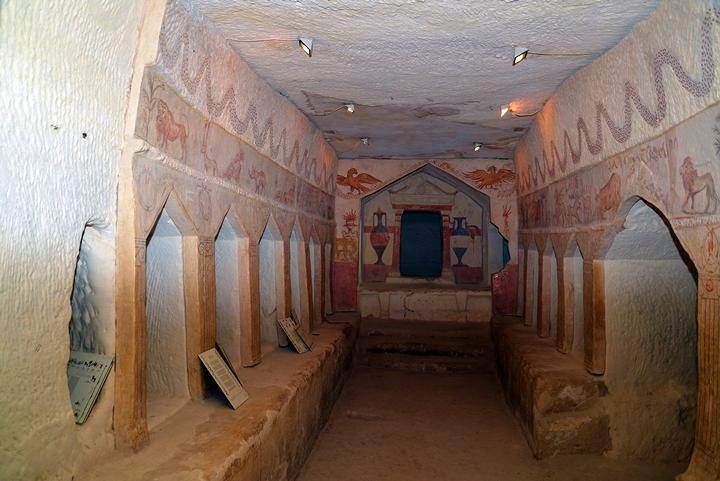 These beautiful paintings are not the originals, as they faded and were damaged after their discovery. Therefore, the illustrations were reconstructed based on earlier photos, painted on panels, and hung on the walls.

At the edge of the main chamber, which opens to three sarcophagus chambers. These were intended for the chief members of the family. The middle one has a portal-like entrance, flanked with two painted large Greek style amphorae, resting on red plinths (heavy bases). 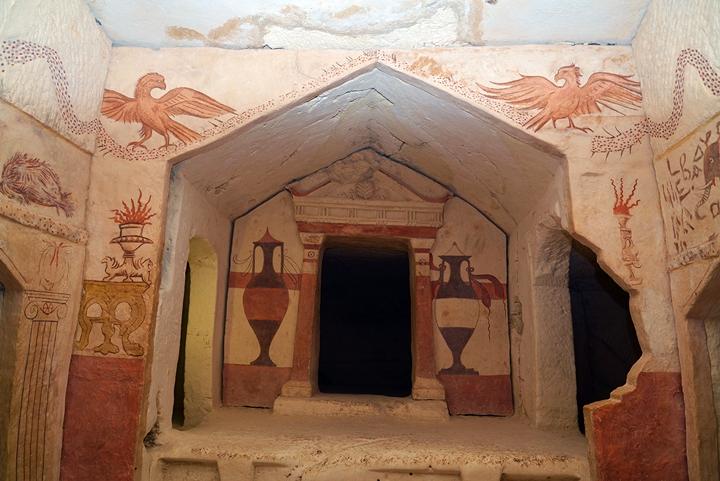 The structure is named after Apollophanaes, who was the leader of the Sidonian community in Maresha.  His family tomb was carved out in the 3rd century BC, and was used for burial of several generations.

Above the southern sarcophagus chamber, on the transverse of the flat door frame, is an important Greek inscription which reads:

” Apollophanaes, son of Sesmaios, thirty-three years chief of the Sidonians at Maresha, reputed the best and most kin-loving of all his times: he died, having lived seventy-four years”.

The  inscription explicitly names the name of the city Maresha, thus establishing an accurate identification of the city.

To the right of the sarcophagus chambers, on the south wall, are illustrations of a hippopotamus and a crocodile, while two large fish are on the right side.  The Greek inscription reads: “(grave) of Apollodoros, son of Zabbaios. Let nobody touch this, and if he will not hearken, then may not his (grave) rest undisturbed. In the year 117 on the 30th of Panemos”. 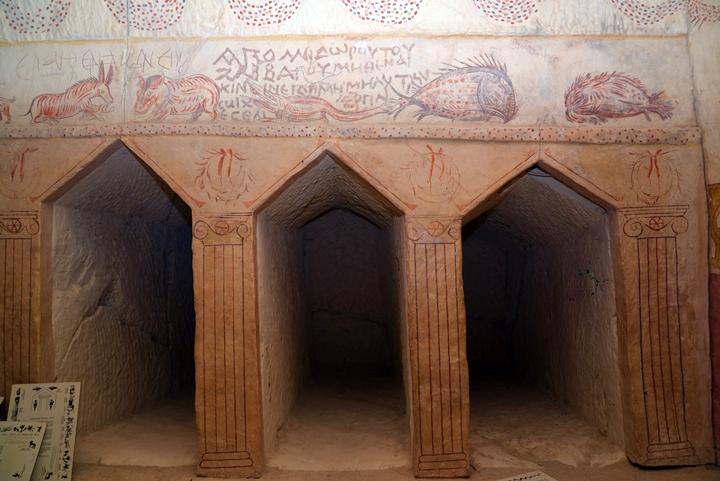 Above a niche on the north west side of the main chamber, under the illustration of a man-headed lion, is a Greek inscription: “Kosnatanos son of Emmaus son of Sesmaos”. The name Kosnatan means “Kos has given”, which is an Idumaean name (Kos is the name of the Idumean God). This is the same Sesmaos who was the father of Apollophanaes, so Kosnatan was the nephew. To the right of his grave, above the loculi, are other inscriptions:  “(Grave) of Ptolemaios” and  (Tomb) of Meerbal” 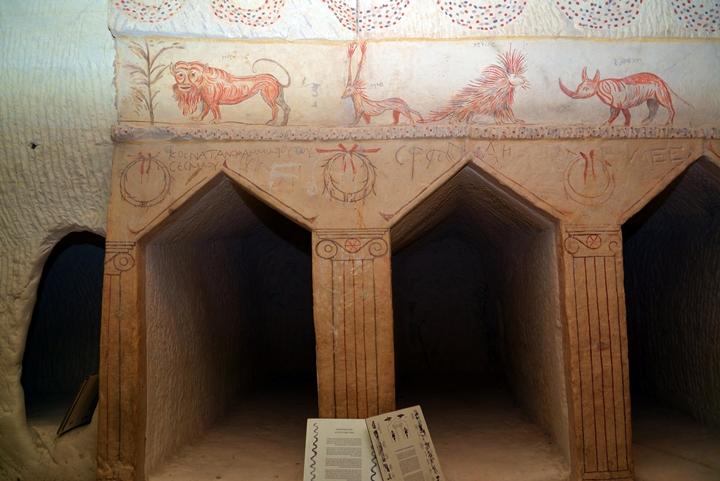 An elephant, rhinoceros  and Oryx (or gazelle) are illustrated above the following niches on the north wall. The inscription reads: “In the second year in the month of Dystros (grave) of Sabo, the daughter of Kosnatanos”. 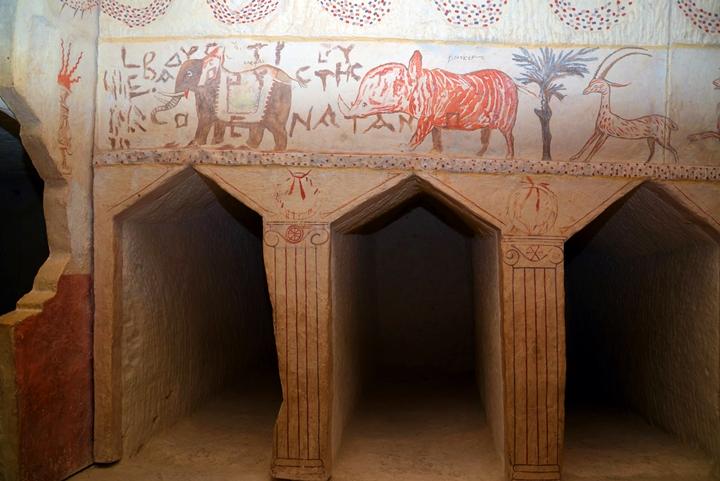 A mythological figure -the Gryphon (or griffin) – is illustrated above the middle niche in the following photo, a section of the south wall. The illustration is enlarged here. This figure is a legendary creature with the body of a lion, but with the head, claws, and wings of an eagle. 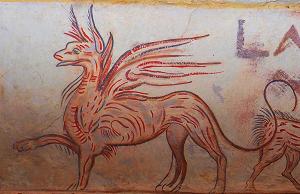 Other animals to the left of the gryphon – a boar, Oryx (or gazelle),  Giraffe and a bull.

The inscription reads: “In the year 171, on the fifth of Dios. (Grave) of Ammonios, son of Zabbaios”. 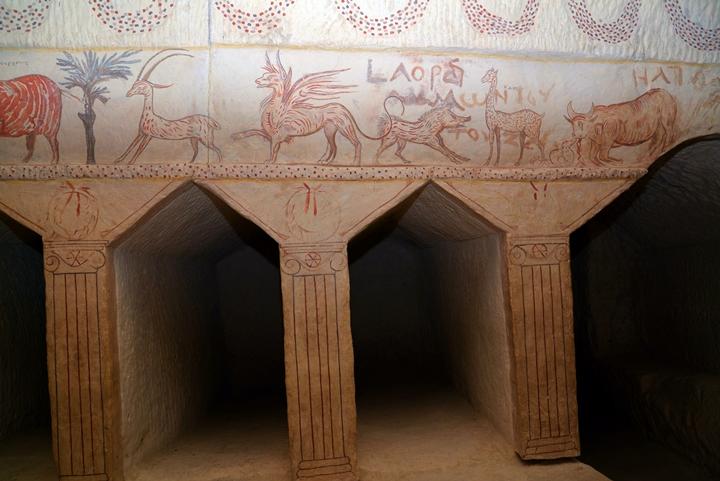 Another view of the illustrations above the loculi on the south wall of the central chamber include the boar, giraffe, bull, and panther. Above the bull is a Greek inscription: “(Grave) of Helliodoros”. 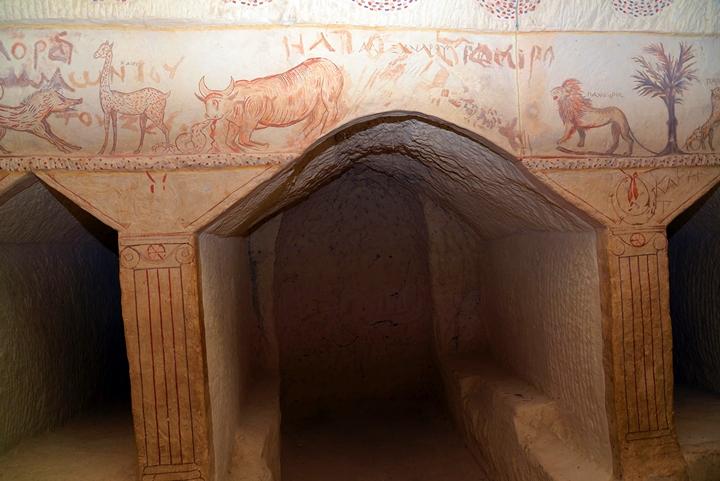 To the right of the panther is an illustration of a chase, with a hunter on a horseback, with his dog, fighting a wounded leopard which is pulled by his tail by a second hound. Another man blows a trumpet. Above the illustrations are the Greek words: “horse”, “Horseman”, “of Lebanon”, “Leopard”. The men’s faces are scratched, as the fanatic Sheikh of Beit Jibrin declared the illustration of faces as Haram – against the Muslim laws. 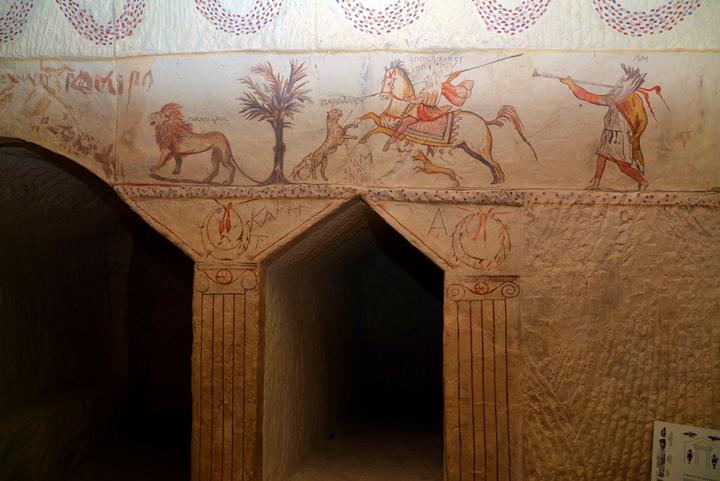 A porcupine, wild ass, hippopotamus. The inscription reads: “Let no one disturb (the) daughter”. 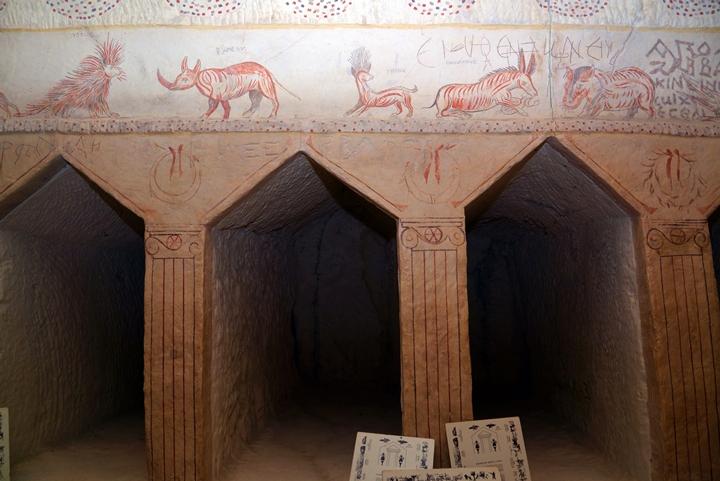 To summarize, this is a remarkable burial chamber, one of the good reasons to visit Maresha.

Ruins of a Crusader period monastery are located to the north east of Tel Maresha. It was dedicated to Anna (Hanna), mother of virgin Mary. Tel Maresha was named after these ruins as “Tell SandaHanna” – a miss pronunciation of Santa Hanna. 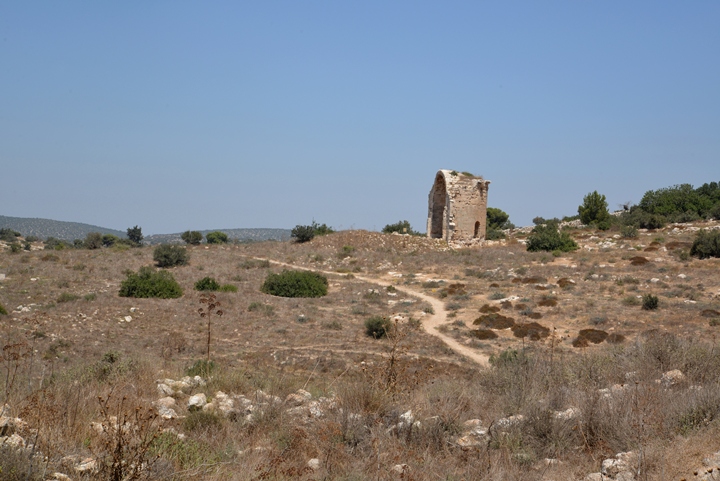 The Crusaders structure was built as a square structure in 1192. The main apse, facing the east, is the only standing wall. It stands over the base of an earlier Byzantine church (5th century AD), which was built in a Basilica plan. 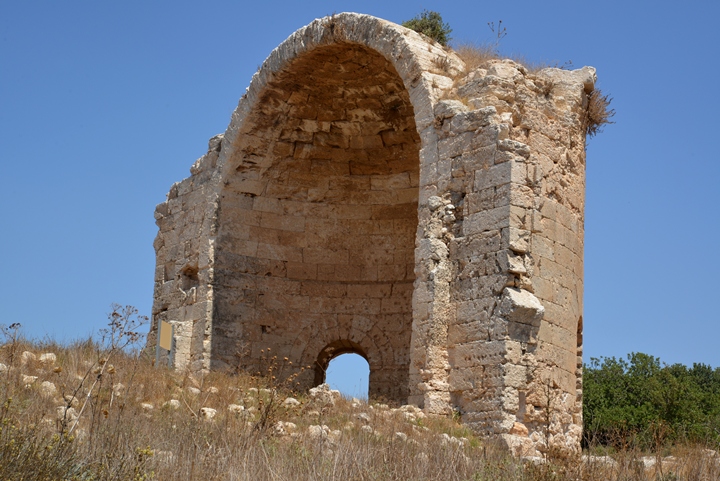 A Roman road passed on the north side of Tel Maresha, connecting Beit Guvrin (Eleutheropolis) to Hebron, Gaza and the south.  Its path is marked on the 19th century PEF map. A Roman milestone remained from the road, and was placed on the side of the modern road. 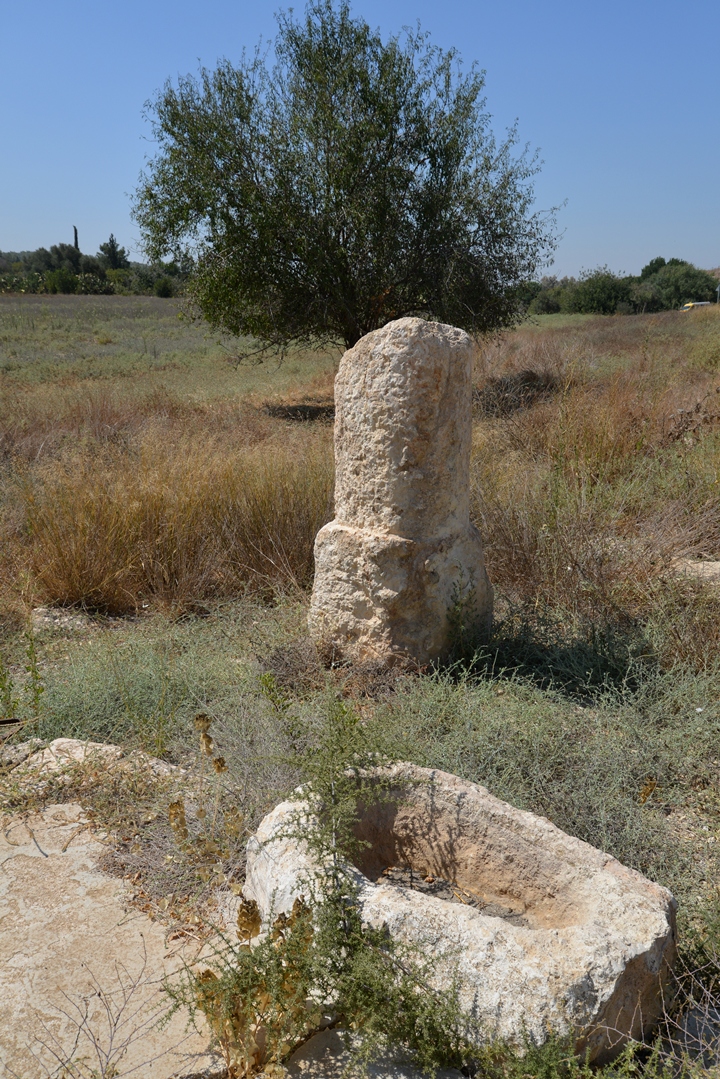 A closer view of the milestone is in the following photo. The inscription on the stone is hard to decipher, but it once spelled out the ranges to the next station and the emperor who commissioned the road.

More milestones and a paved section of the Roman road are reported to be located 2KM south of the Sidonian caves, and described in the Archaeological survey (site 11 of map #109, with 19 milestones). Another section of the road and more milestones are found north of Amazya. Another nearby visible section, along Nahal Maresha, is part of the road to Gaza (site #2 in Arch. Survey map 109). 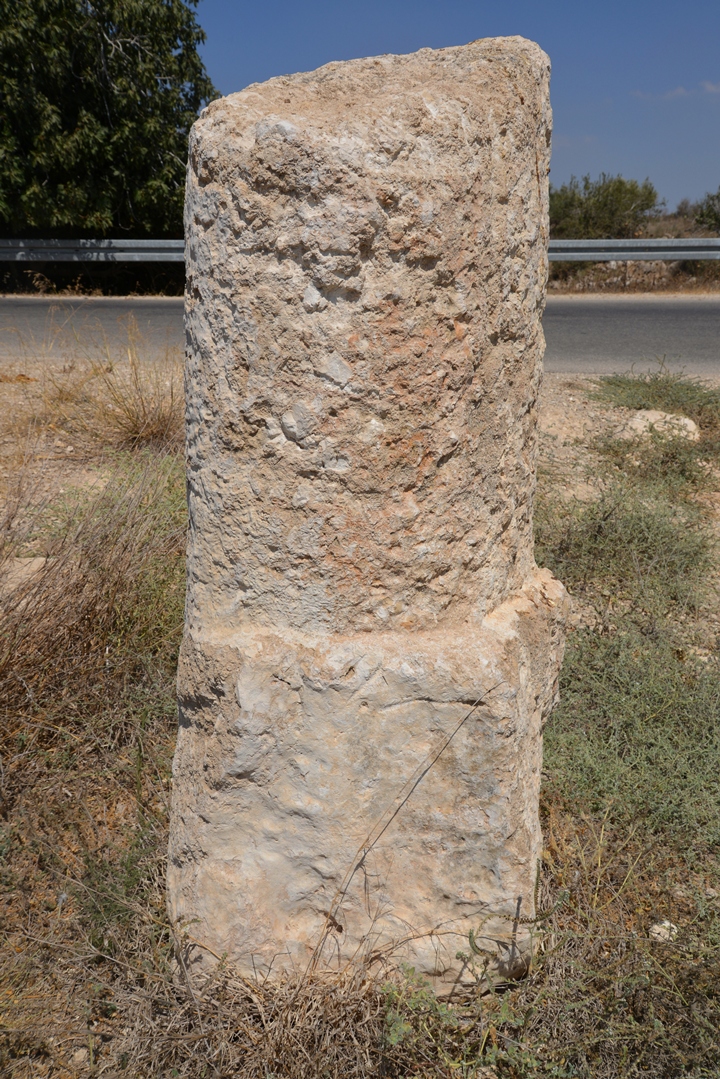 * Other sites on the national park: