The port of Jaffa is one of the most ancient maritime harbors in the world.  Due to its natural advantages, a hill above a bay, and its strategic location on the crossroads of Israel, the city was a center of historical events over thousands of years. It is mentioned in many written sources  – such as the Old testament (cedar for Solomon’s temple, Jonah the prophet), New testament (Peter’s travels), and the Greek mythology (Andromeda rock).

The ancient port of Jaffa is located to the north of the modern port, as shown below. Sections of the ancient water break (called “Andromeda” rocks) can be seen submerged in water.

The history of the port of Jaffa is described in the overview page of Jaffa.

An old illustration of the port, dated 1882, is shown here from a book by CH. W. Wilson , one of the PEF explorers. The title reads: “View of the rock-encircled harbor at Jaffa”. The view is from the house of Simon the Tanner, which is located near the modern lighthouse. 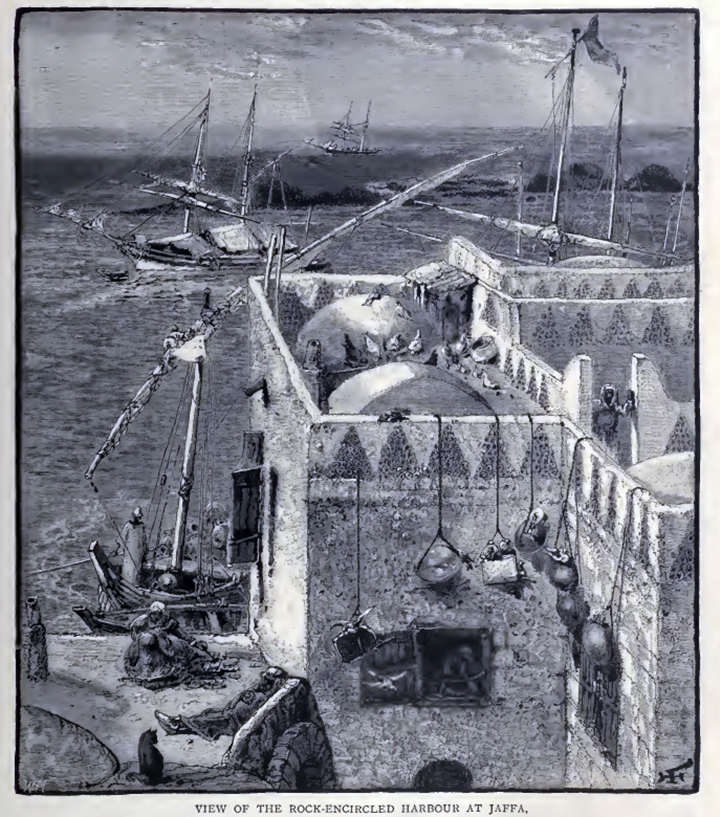 (a) Views from the old city:

The old city overlooks the old port of Jaffa, where the ancient port was built. In the waters, behind the tower of the sea mosque,  you can see the remnants of  the ancient port – the chain of the “Andromeda” rocks. 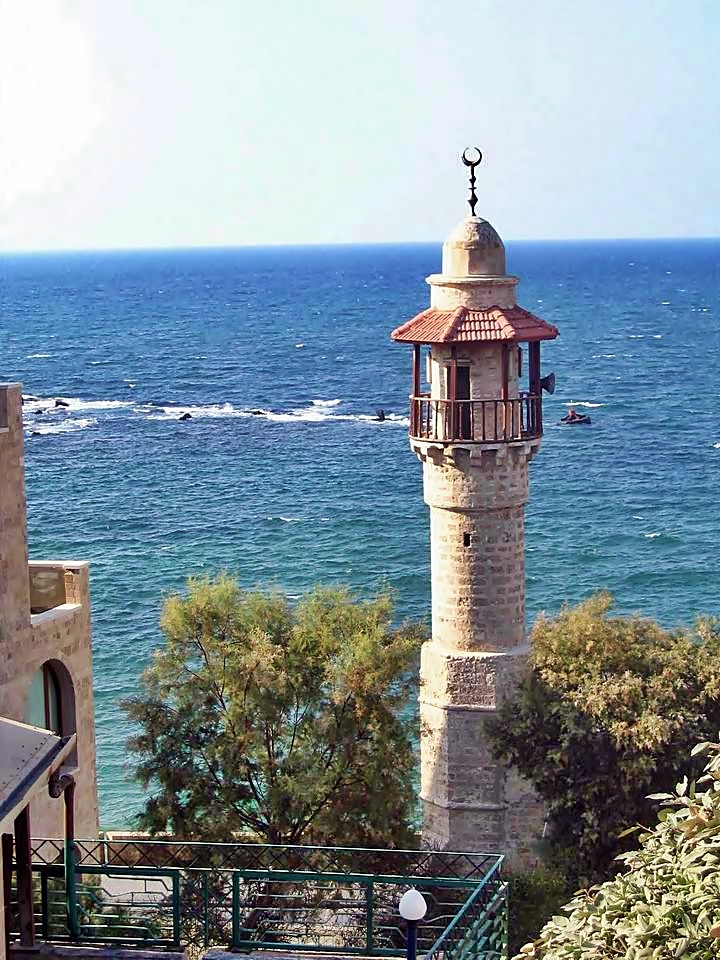 In the next picture is another view of the ancient pier  (on the right side) and the new pier (left side), which is used by fishermen and tourist boats.

In the foreground – the old city houses above the port. 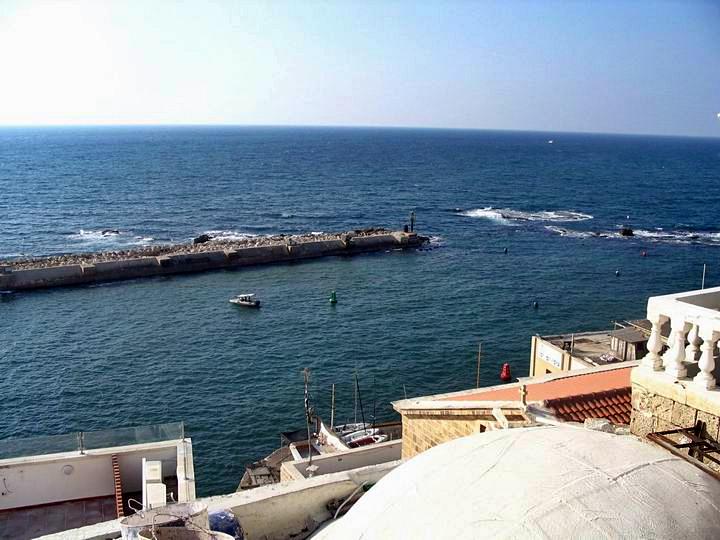 (b) The ancient port – Andromeda Rocks

A chain of rocks line up along the north side of the modern harbor. These rocks were part of the natural water break of the ancient port. 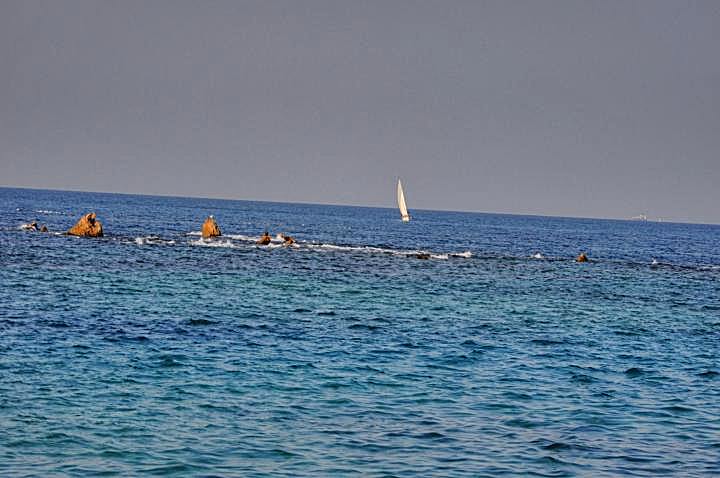 The rocks are also called “Andromeda rocks”. According to the Greek Mythology, Andromeda was  a beautiful princess who was chained to the rock, so she would be sacrificed to the sea beast. She was saved by the Greek hero Perseus who killed the sea beast, turning it to stone using Medusa’s head, then claiming her as his wife. So these rocks, according to this legend, are the remains of the sea beast who was turned into stone in the sake of Love. 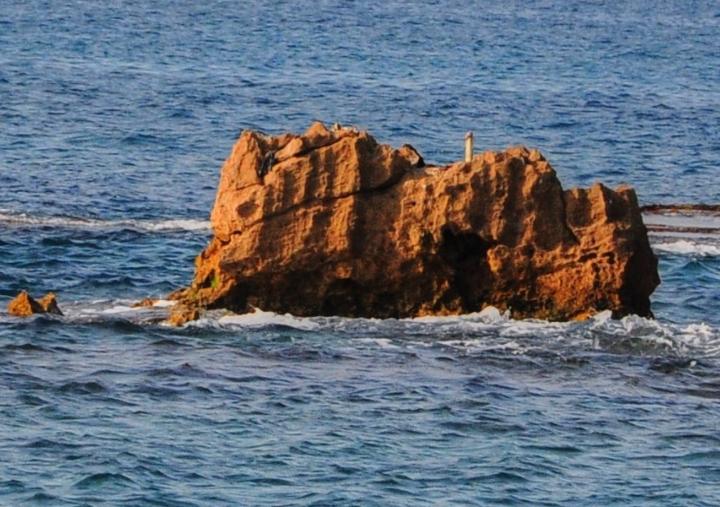 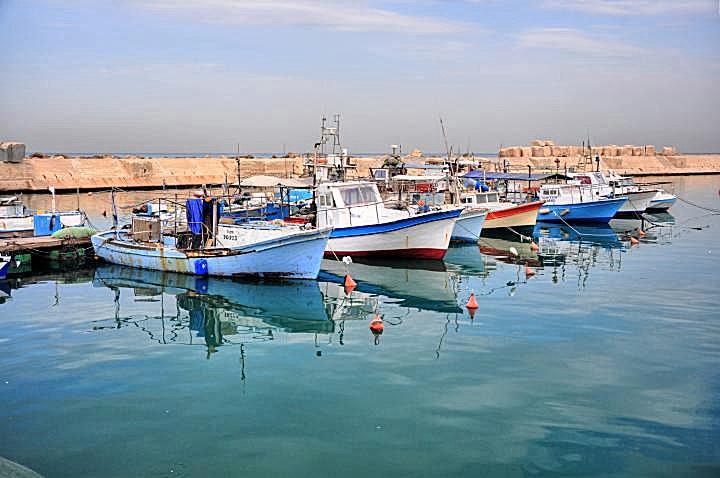 Webmaster Rotem stands before one of the fishing boats. 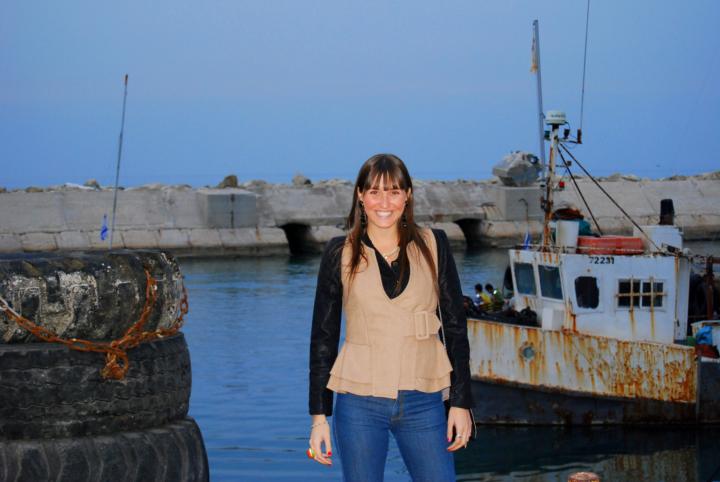 And a night picture: 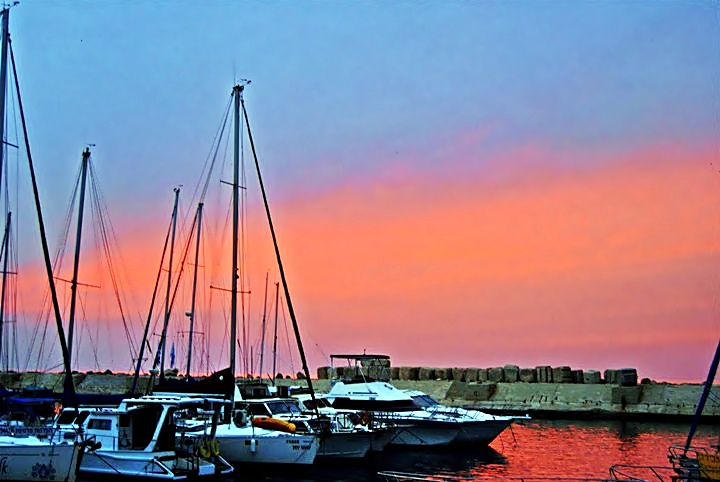 A recent reconstruction of the port converted some of its warehouses to restaurants, thus turning the area to a lovely tourist and recreation area. 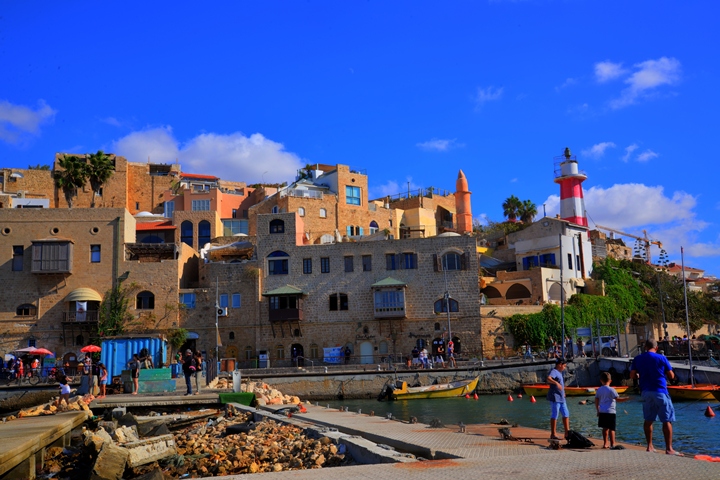 The tourist area also offers free parking on its south side, a great plus for the busy Tel-Aviv area. The following view shows the large parking area from the south, with Old Jaffa in the background, and Tel Aviv in the far left side. 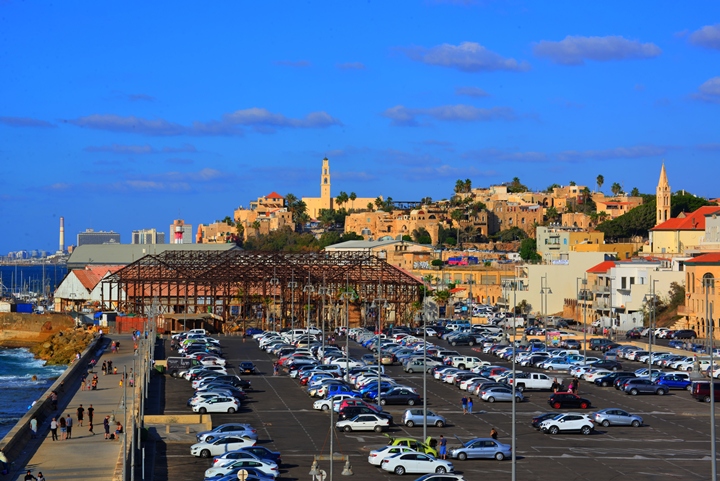 On the north side of the port is the northern access road, now closed for traffic. The following picture is taken from the north, looking towards the port area. 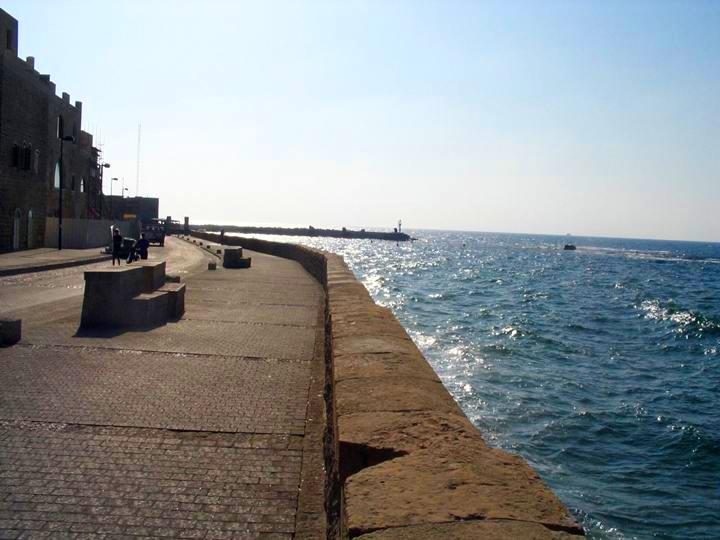 The next photo is a view towards the north. The bell tower of St. Peter’s is seen in the center of the view, high above the old city buildings. 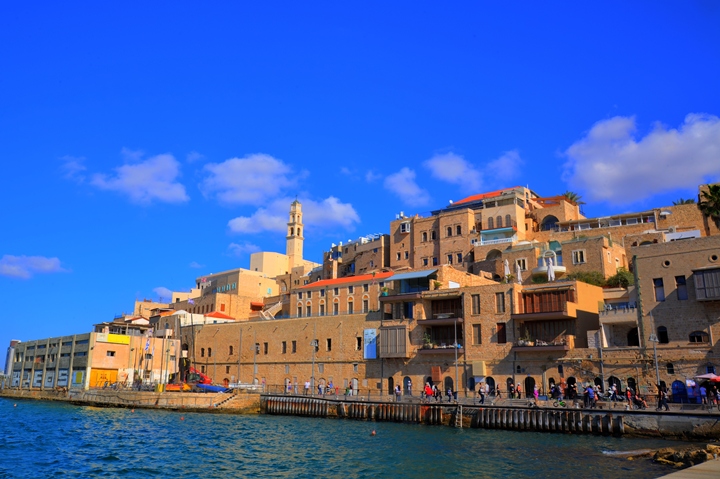 The following picture is  a view towards the north, captured at night. In the background of webmaster Rotem is the skyline of Tel-Aviv, with its hotels lined along the beach. 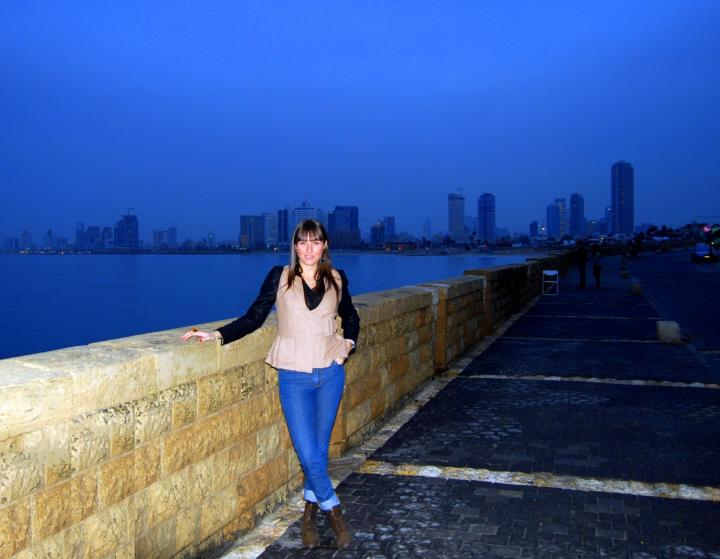 A panoramic view of the sights around the northern section of the port of Jaffa  is seen in this photo. Pressing on the picture will pop up the panoramic viewer. Using this flash-based panoramic viewer,  you can move around 360 degrees, zooming in and out – viewing the site in a full screen mode (like you are really there).   Points of interest are  indicated on the view.

To open the viewer, simply click on the photo, then tour the area around. It may take minutes to upload…

BibleWalks.com – sailing to the safe haven of the Bible

This page was last updated on Apr 17, 2020 (Add Wilson illustration)