A visitor’s center and historical well in BeerSheba, associated with the history of the Patriarchs Abraham and Isaac.

The site is located on the north bank of Nahal Be’er Sheva stream, on the side of Ha-Ayin-Lamed street.

The Bible associated the acts of Abraham and Isaac to the name of the city, which reads in Hebrew as the “Well of the oath”, or “seven wells” or “seven lambs”. 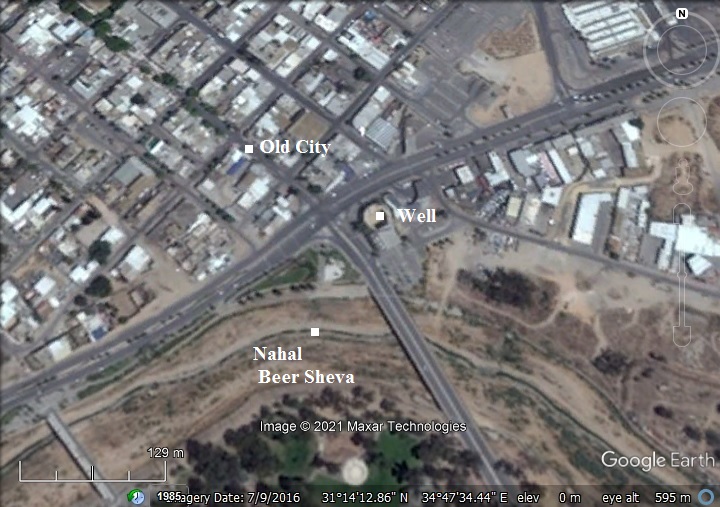 Abraham’s father Terah moved with the family from Ur of the Chaldees to Haran (Genesis 11:32), where he died. Abraham and his nephew Lot then continued to Canaan.

“And Abram took Sarai his wife, and Lot his brother’s son, and all their substance that they had gathered, and the souls that they had gotten in Haran; and they went forth to go into the land of Canaan; and into the land of Canaan they came. And Abram passed through the land unto the place of Sichem, unto the plain of Moreh. And the Canaanite was then in the land. And the LORD appeared unto Abram, and said, Unto thy seed will I give this land: and there builded he an altar unto the LORD, who appeared unto him. And he removed from thence unto a mountain on the east of Bethel, and pitched his tent, having Bethel on the west, and Hai on the east: and there he builded an altar unto the LORD, and called upon the name of the LORD”. 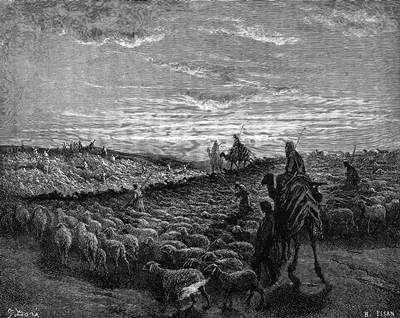 After then, Abraham continued to the southern desert, and settled in the Negev desert (Genesis 12).

Abraham moved to Egypt during a drought, then returned to dwell in the desert area of BeerSheba (Genesis 13:1).

The digging of the well is mentioned by the Bible in two cases, both of them naming the city after the alliance with the Philistine king Abimelech. The Bible explains the name of the well as being based both on the Hebrew word “Sheva” (meaning: seven),  and also the root word of “oath”.

The first case is about Abraham’s alliance, which was arranged after a quarrel over the well hewn by Abraham’s servants, but repossessed by Abimelech’s men (Genesis 21 27-32):

“And Abraham took sheep and oxen, and gave them unto Abimelech; and both of them made a covenant. And Abraham set seven ewe lambs of the flock by themselves. And Abimelech said unto Abraham, What mean these seven ewe lambs which thou hast set by themselves? And he said, For these seven ewe lambs shalt thou take of my hand, that they may be a witness unto me, that I have digged this well. Wherefore he called that place Beersheba; because there they sware both of them. Thus they made a covenant at Beersheba: then Abimelech rose up, and Phichol the chief captain of his host, and they returned into the land of the Philistines”.

The second case is told in connection to Abraham’s son, Isaac, who wandered south on his way to Egypt during the feminine years. Once again, the Philistines attempted to posses the well hewn by the Hebrews, and the new alliance based the name of the city on the “oath”  (Genesis 26: 23,33):

“And he went up from thence to Beersheba… And it came to pass the same day, that Isaac’s servants came, and told him concerning the well which they had digged, and said unto him, We have found water. And he called it Shebah: therefore the name of the city is Beersheba unto this day”.

Note 1. Having two multiple instances of the same story is common in other Biblical stories. It may be explained by the fact that the writer incorporated different versions which have existed at the time of the compilation of the book.

“Upon its northern side, close upon the bank, are two deep wells, still called Bir es-Seba’, the ancient Beersheba… These wells are some distance apart ; they are circular, and stoned up very neatly with solid masonry… The larger one is twelve and a half feet in diameter, and forty-four and a half feet deep to the surface of the water; sixteen feet of which at the bottom is excavated in the solid rock. The other well lies fifty-five rods W. S. W., and is five feet in diameter and forty-two feet deep. The water in both is pure and sweet, and in great abundance…

Both wells are surrounded with drinking-troughs of atone for camels and flocks ; such as were doubtless used of old for the flocks which then fed on the adjacent hills. The curb-stones were deeply worn by the friction of the ropes in drawing up water by hand.”. 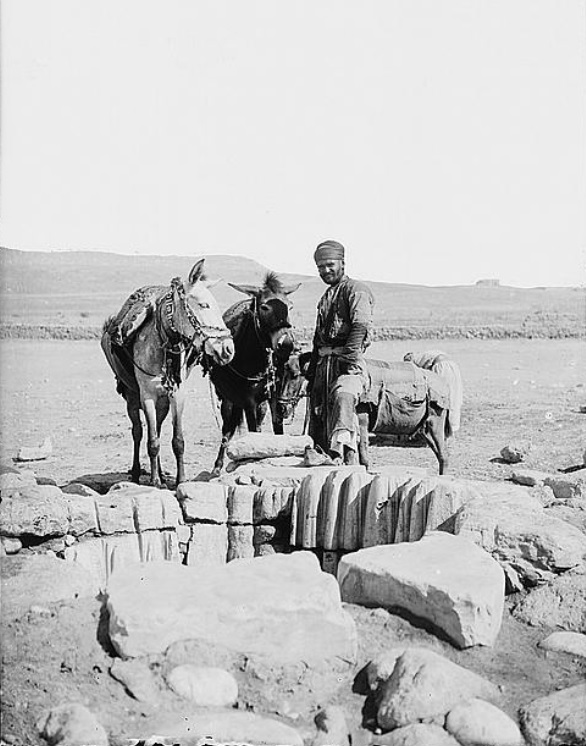 A visitor’s center was built around the wells. It is open to pre-scheduled group tours.

The visitor center is located at the south end of the old city, near a bridge that crosses the BeerSheba stream. This is the front view of the modern structure. 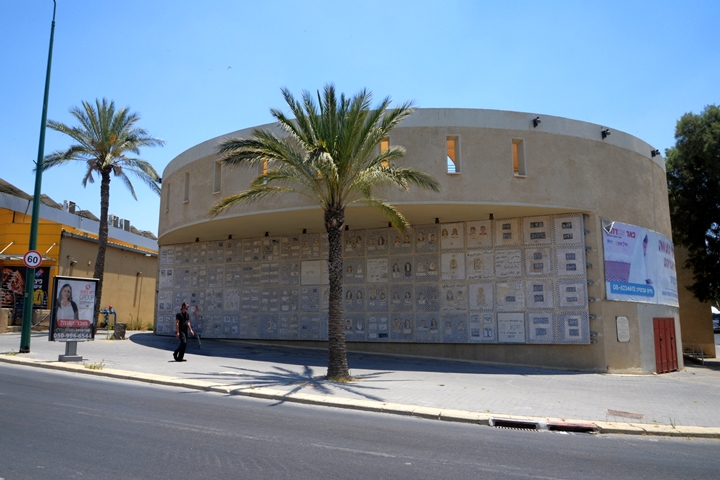 The entrance is from the rear, seen below.

The structure, covering an area of 1400 square meters, was designed by Eliezer Armon, and constructed in 2014. Its design was inspired by Abraham’s desert tent. (Genesis 18:1): “…and he sat in the tent door in the heat of the day.” 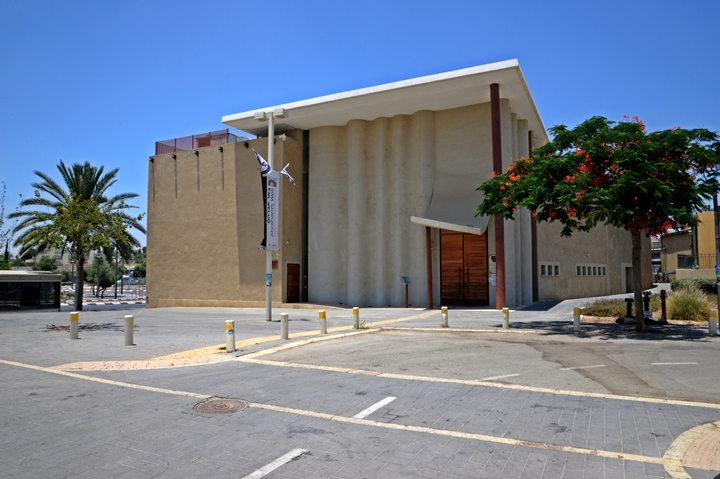 The interior is also designed to resemble a wide tent, that is open to the desert.

Inside the entrance hall is a map of Abraham’s journeys. 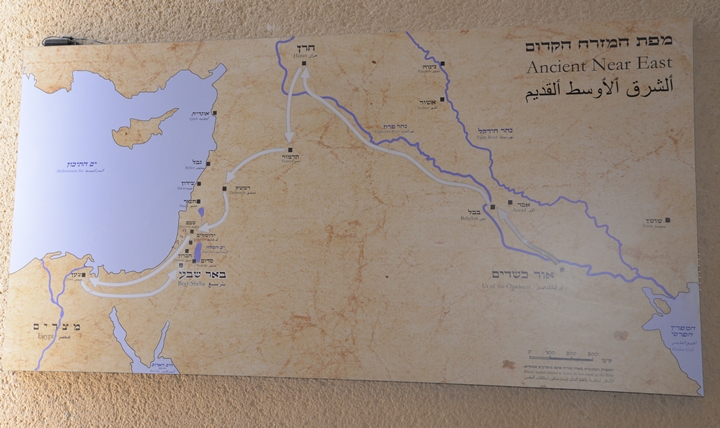 Inside the visitor’s center, a guide welcomes the group, and provides an introduction to the site. 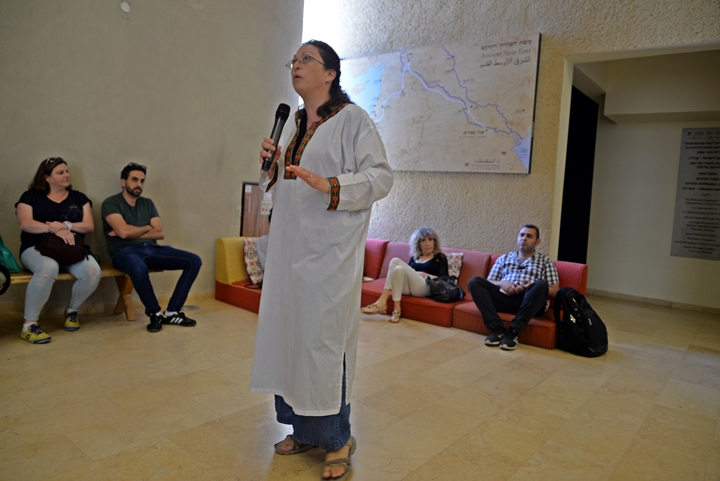 The group then walks up to the screening theater on the second floor, along a specially illuminated walkway, with verses from the Bible describing Abraham’s journeys. 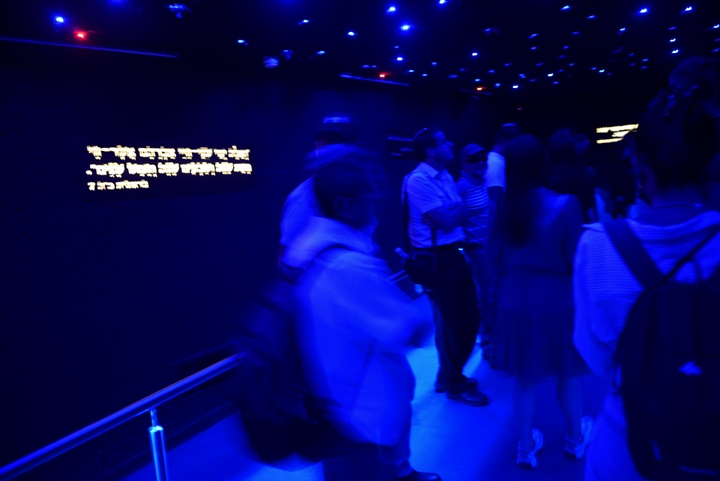 Along the walkway are scenes of the desert area.

Inside the screening theater is a 3D presentation of Abraham’s journeys. 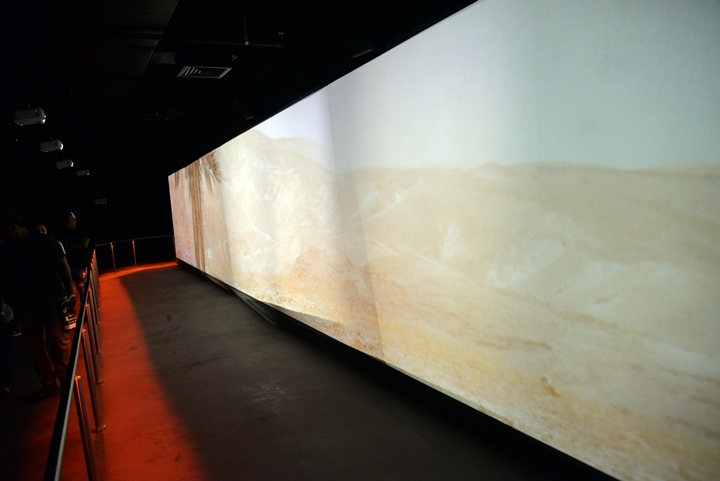 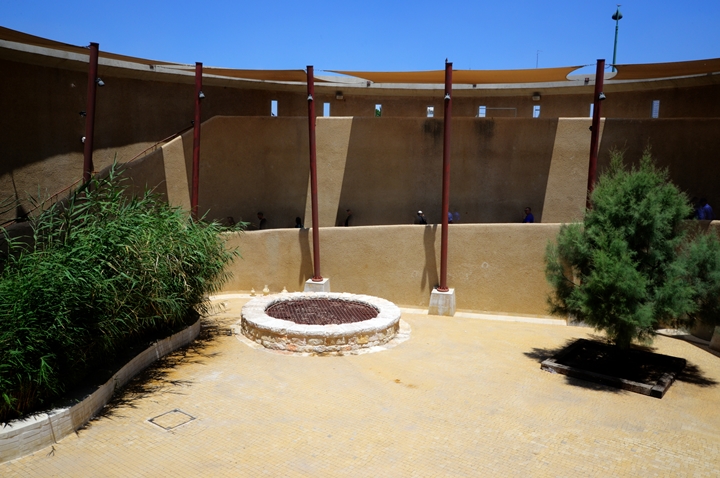 The larger well is on the left side of the courtyard. 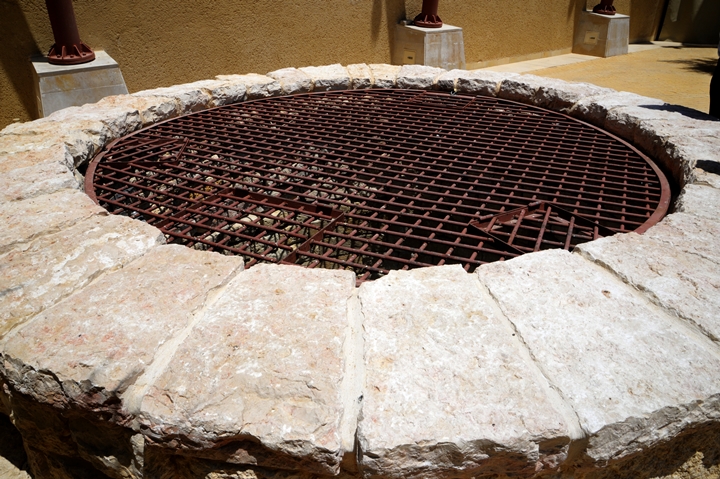 A peak into the well… 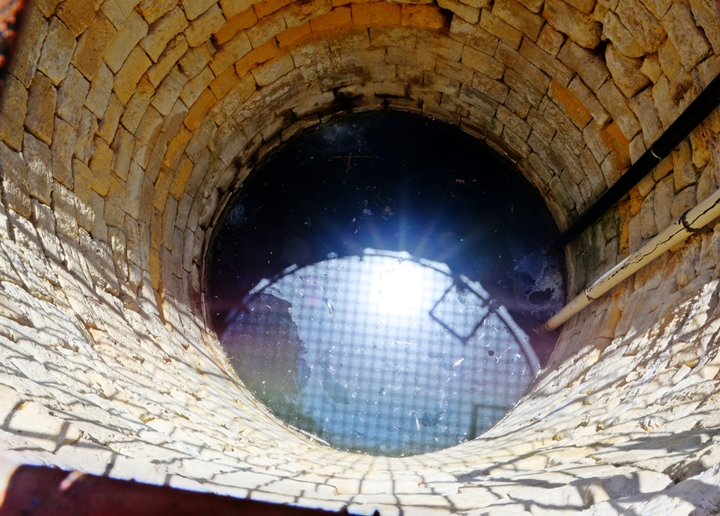 The other well is on the right side. 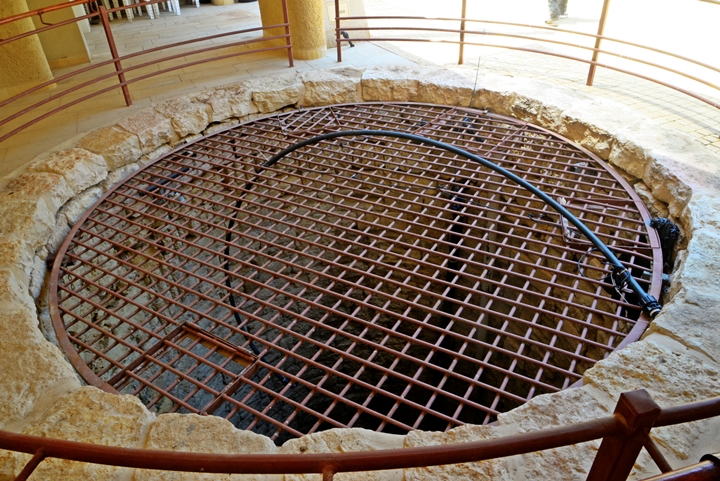 An old tree grows on the side of the visitor center. Its common name is Abraham’s Eshel tree, as per (Genesis 21:33):

“And Abraham planted a grove in Beersheba, and called there on the name of the LORD, the everlasting God”.

Scholars identify the tree planted by Abraham as Tamarix aphylla. These tree species are found along watercourses in arid places, and are resistant to saline and alkaline soils. 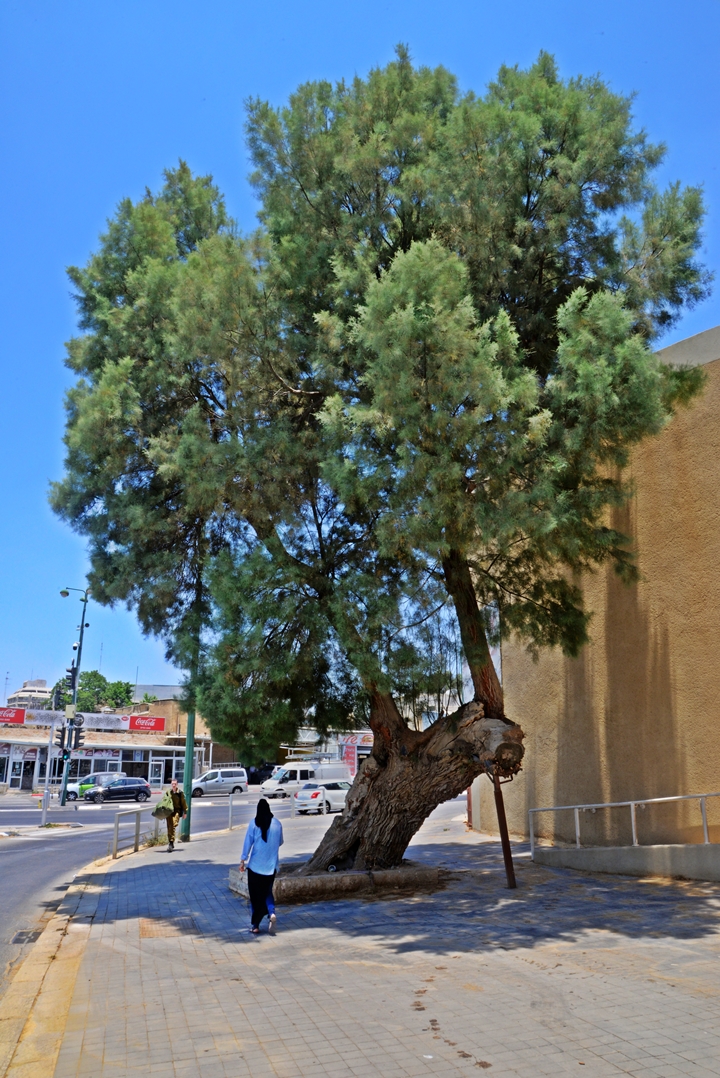 Abraham’s well is located on the north bank of the wide BeerSheba stream. 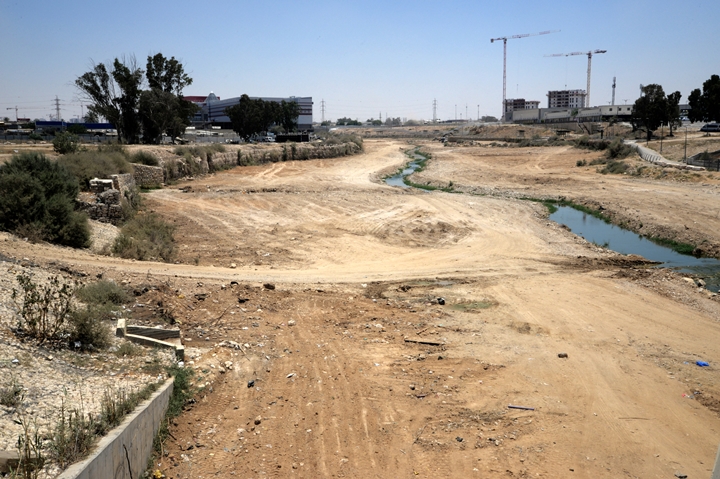 To the north of the visitor center is the old city of Beer-Sheba, that was built by the Ottomans in ~1900. It was the only city they established in the Holy land during their 400 years of government of the land.

The shops along the Kakal street, straight ahead of the center, offer a variety of food – a good place to end the tour. 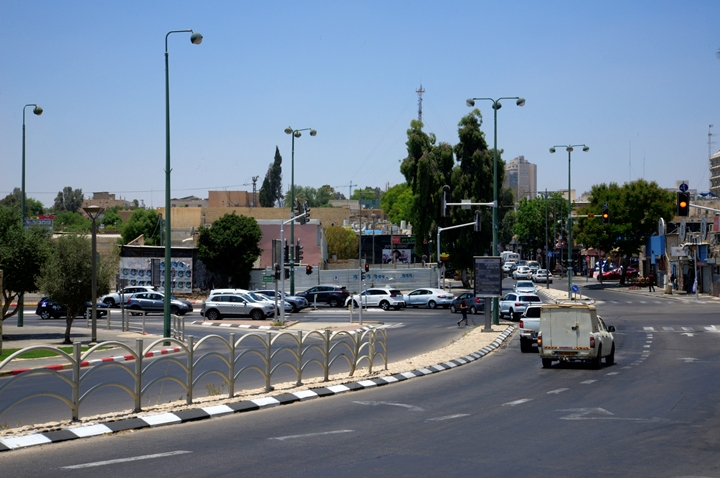 – “well of the seven lambs” based on the terms of the oath.