A major tourist attraction – an underground Jerusalem tour along the tunnels connecting the western wall prayer area to the north-west corner of the temple mount. 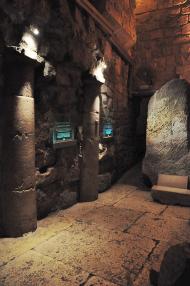 The tour of the western wall tunnels is one of the most popular tourist sites in Jerusalem. These underground tunnels  connect the western wall prayer area to the north-west side of the temple mount, passing along the side of the temple mount and under the present day houses in the Old City. Along its path are remains from the second temple period, as well as structures from later periods.

The experience of walking along the tunnels is like taking a time machine back to the time of the second temple. Don’t miss it!

During the second temple period – from the Hasmonean period (2nd century BC) up to the Roman destruction of Jerusalem (70AD) – the area west of the temple mount connected the temple to the the western side of Jerusalem. There were four gates located on this side – two gates at a lower level and two gates on top of bridges. A paved street passed at the foot of the temple mount, and additional structures and installations were located at that street level.

Following the Roman destruction, the debris accumulated along the western side. After two millenniums, new buildings were built on top of these old layers. However, under these structures, some cavities remained buried deep underground.

Since the 19th C, explorers examined these cavities and tunnels in the search for the second temple remains. Explorers, such as Warren and Wilson, did manage to unearth sections of the tunnels, but they were limited in their research by the Ottoman rulers. Only after the six-day-war (1967), when the area returned to Israeli control, the underground area was thoroughly researched and reconstructed, and some sections are still in the process of archaeological excavations.

The tourist site was fully opened in 1996, with 500m long tunnel along the buried north-western wall. The opening of the northern exit sparked deadly Arab riots in the old city for several days.

The route of the tunnel tour starts from the entrance on the north side of the  western wall prayer area, and ends in Via Dolorosa (near station #1). Since there is a limit in the number of visitors that can join a tour, an appointment should be made well in advance.

The plan of the western wall tunnel tour is illustrated below. The highlights of the tour are marked as (a) to (o), ordered according to the direction of the walk along the western wall  (from south to north). You can click on any of the links to scroll to the section with more info and photos. 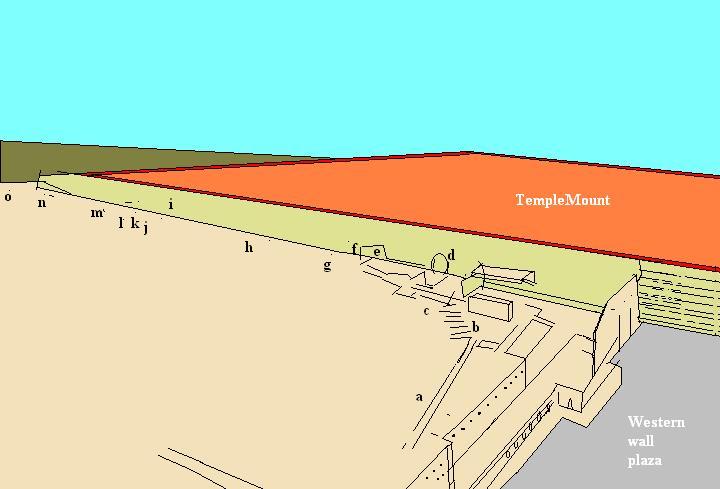 The photos are ordered from south to north, as illustrated in the plan.

During the Roman period, one of the western entrances to the temple mount was over a bridge which is now called the Wilson arch, which is located on the north side of the Western Wall prayer area. It is described by Josephus on several occasions: the description of the attack by Pompey in 63BC (Wars 1 7 2): “Aristobulus’s party was worsted, and retired into the temple, and cut off the communication between the temple and the city, by breaking down the bridge that joined them together”. The bridge was destroyed during Titus’s attack in 70AD (Wars 6, 6 2): “…a bridge that connected the upper city to the temple”. It was later repaired by the Romans in the 2nd or 3rd C after they established a Roman temple on the temple mount.

The bridge (aka “the Great Causeway”) was repaired in the 7th century by the Arab rulers, who connected the west side of the city to the temple mount for easier access to their new Al-Aqsa and Dome of the Rock mosques. The present day Chain street (Silsila) actually passes on its upper side. 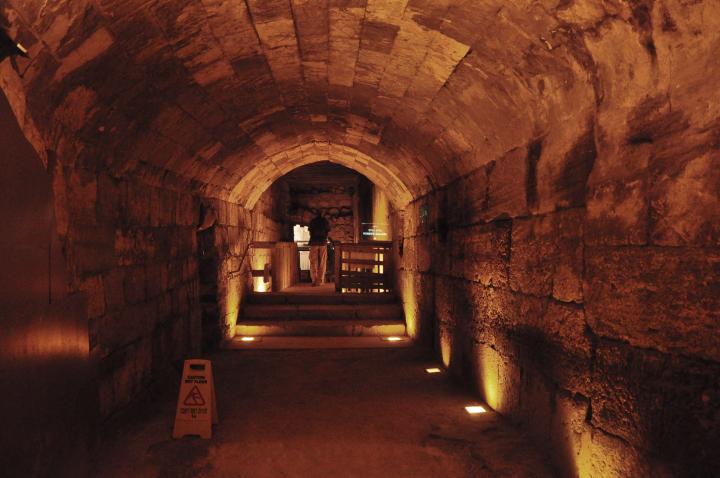 The cavity below the street was termed “the secret passage” in the middle ages. It stretches along 70m – from the Hagai (Al-Wad) street on the west to the temple mount on the east. This “secret passage” serves today as the entrance to the underground tour. 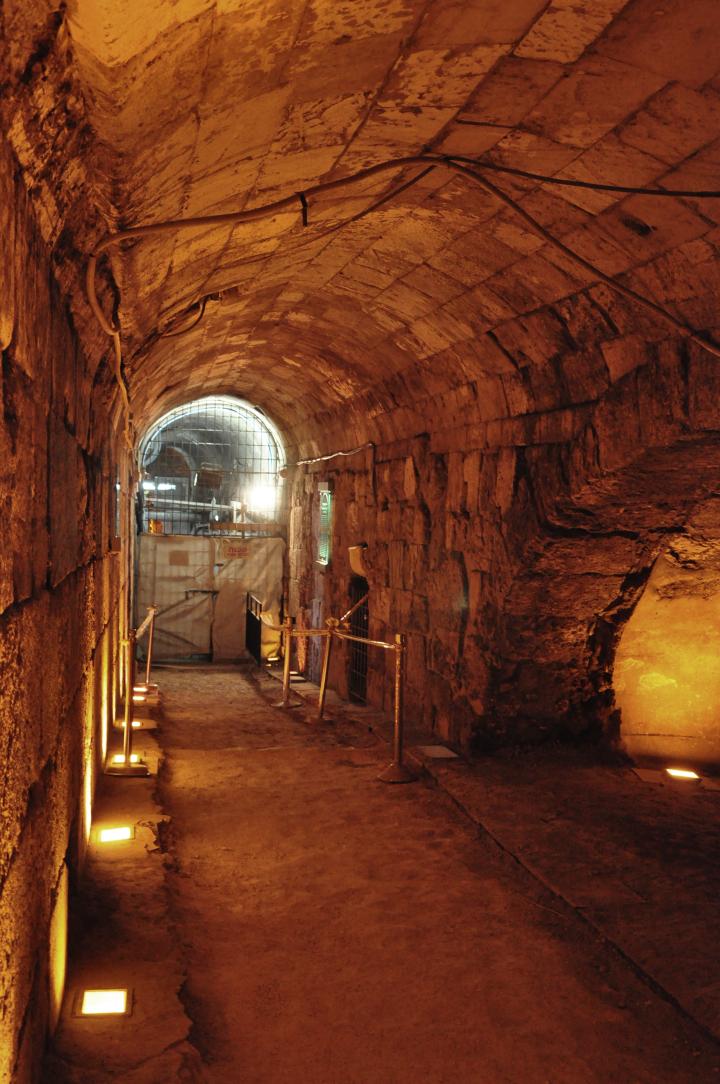 The area around the “secret passage” is still undergoing excavations. The archaeologists revealed second temple period stairs and other ancient findings. 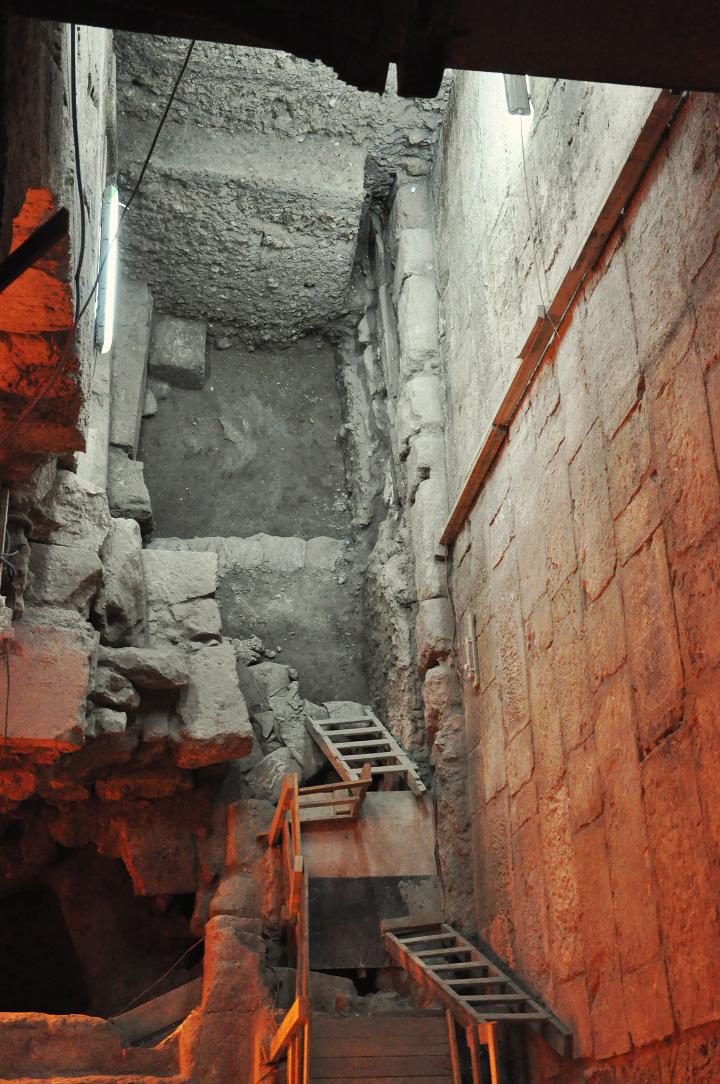 Perhaps it was part of a staircase that led the pilgrims from the street level, up through the stairs, cross over the street above the “Wilson’s arch”, and into the western entrance of the temple mount. This is similar to the staircase entry (“Robinson’s arch”) on the south side of the western wall.

North to the Wilson arch and bridge is a large underground cavity called the “large hall”. Its high ceiling allows a great view of the hidden western wall. 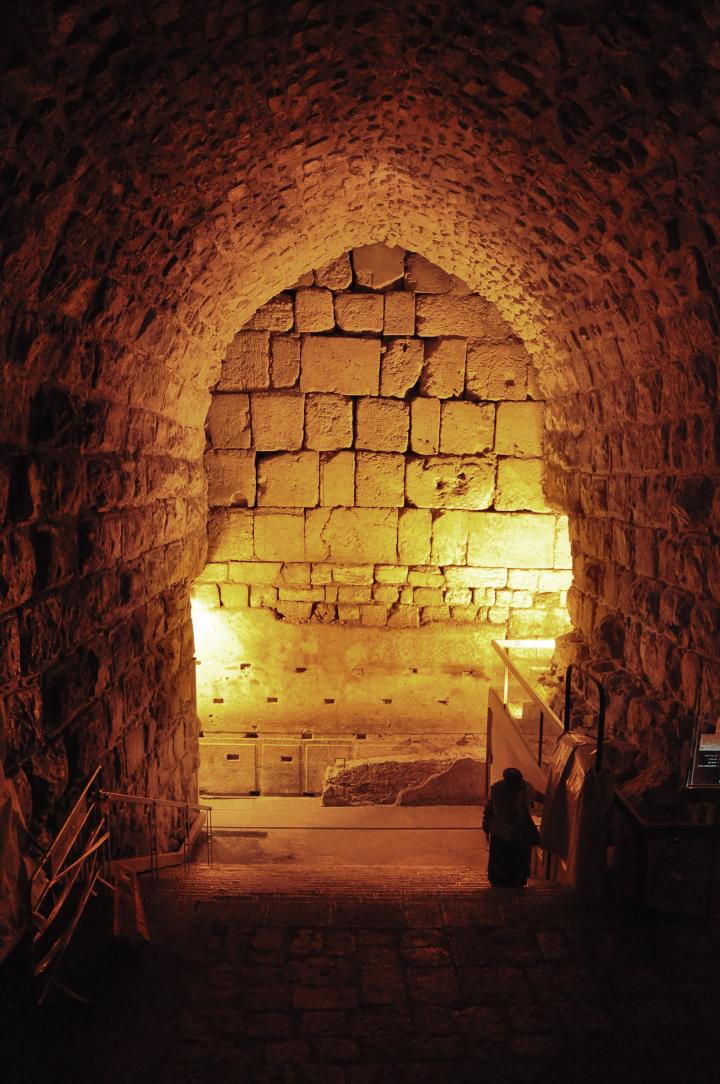 A model of the second temple is located on the west side of the hall, in front of a set of benches. The tour guide describes the story of the temple mount with the assistance of the model, which uses the electrical controlled mechanism to demonstrate the phases of its construction by Herod. 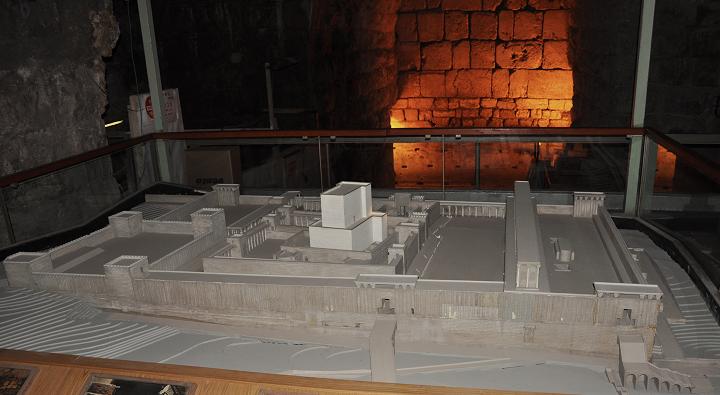 On the eastern side of the great hall are remains of the lower side of the Herodian Western wall. The base stones are incredibly huge – the largest one – seen below – is 14m wide and 4m high, and weighs 600Tons! 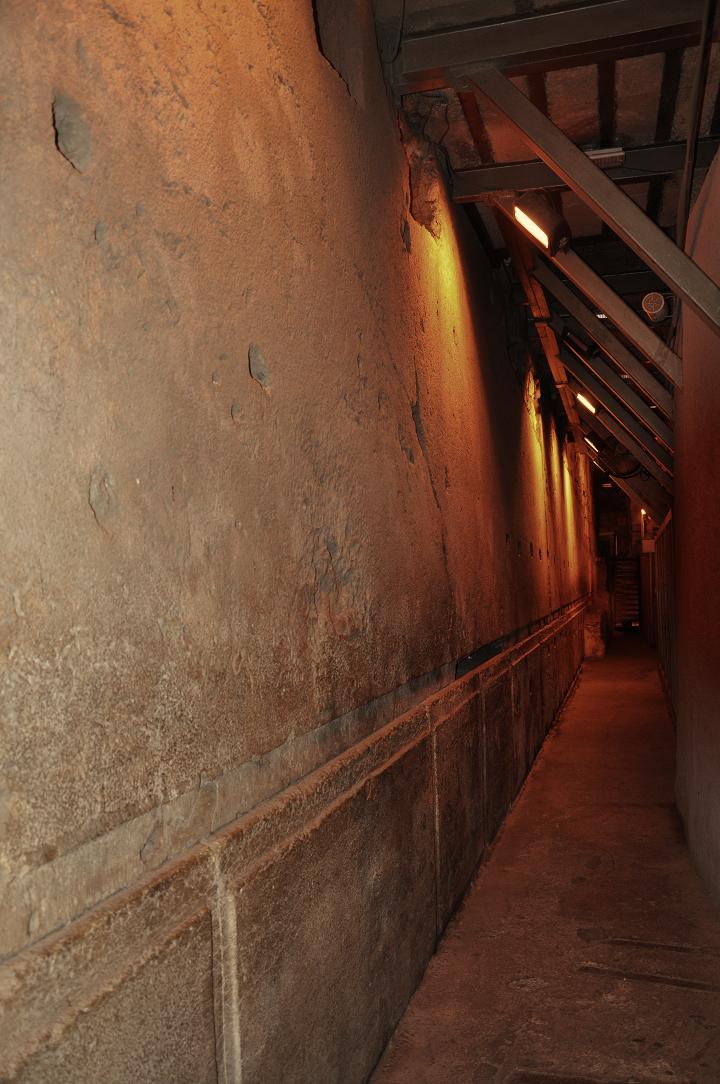 There is no cement holding the stones together; only their weight and the perfect match between the stones made them hold firmly together, and withstand the enormous pressure of the temple mount over two millenniums. 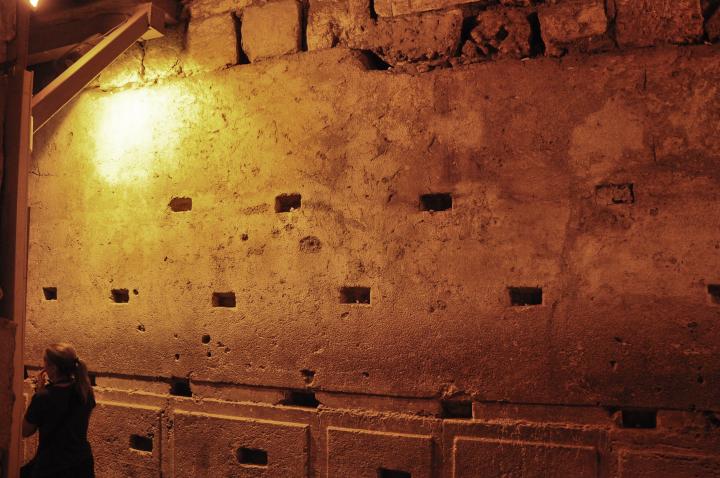 The rectangular holes in the stone were added in the middle ages. Their purpose was to hold the plaster which was applied onto the walls, when this section was transformed into a water reservoir. 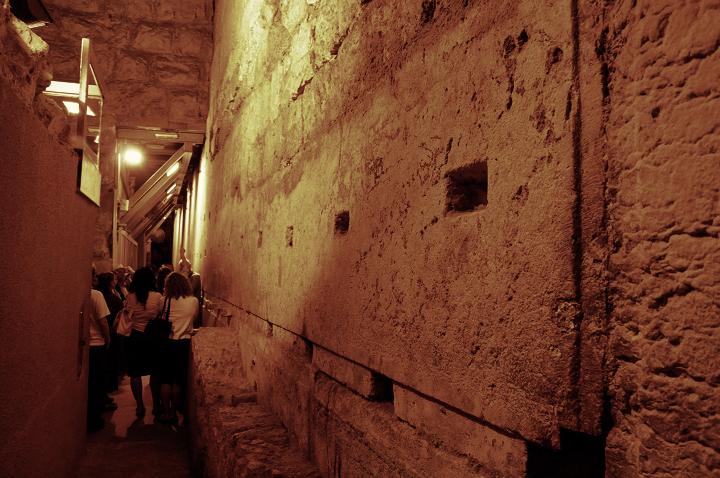 This underground gate, now sealed, is located 40m north of the Wilson arch. The entrance here is located at the bottom of the temple mount ancient walls, at a depth which was the street level during the second temple period.

The opening of this gate  faces the Holy of Holies structure and the foundation stone, and therefore is considered  the holiest gate. It was discovered in 1867 by Charles Warren. 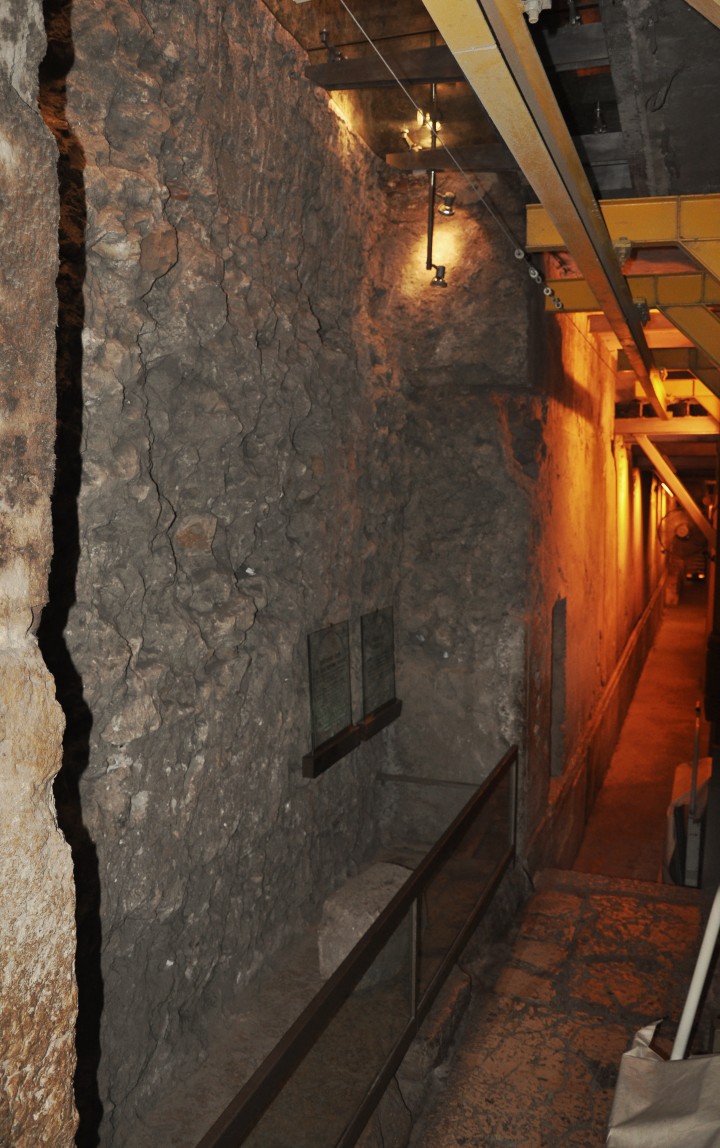 The gate is seen in the center of the photo below, which is part of the model in the large hall. 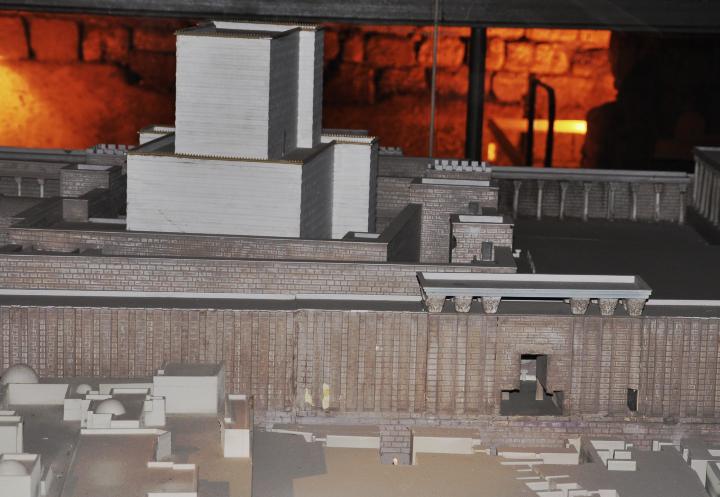 (f) Opposite the Foundation stone

The foundation stone (Hebrew: Even Ha-Shtiya,  from the word “Tashtit”), also known as “The Rock” (Hebrew: Ha-Sela), was the heart of the Holy of Holies. According to Jewish tradition, the rock marks the center point of God’s dwelling and the creation of the world.  Some traditions and archaeologists locate it in the center of the Dome of the Rock, which is located beyond the wall, although there are other suggested locations around the temple mount.

The Jewish women, seen below, come to pray here in the niche of the “opposite foundation stone”, or in other locations along the wall. 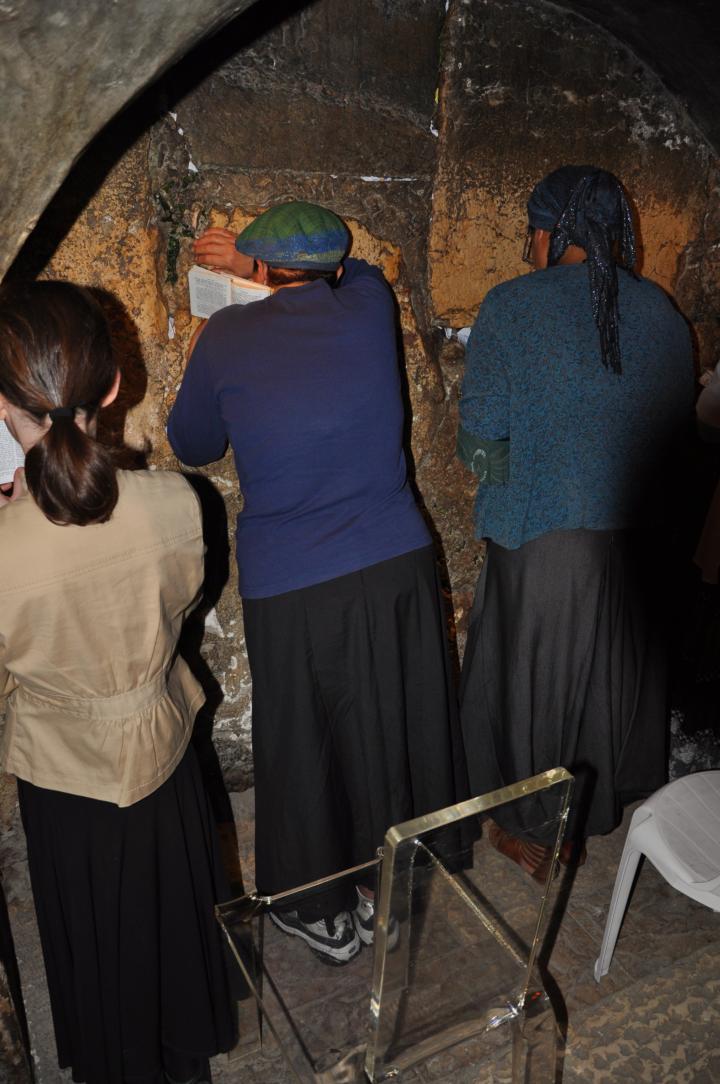 Along the western wall is a medieval period cistern. 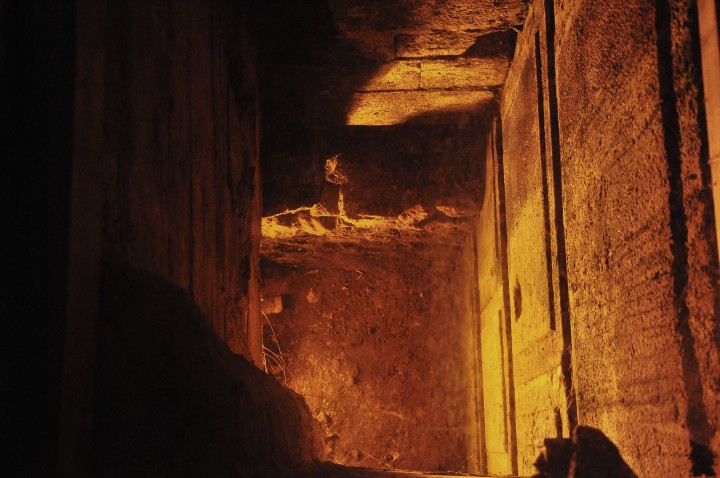 During the excavations and preparation of the western wall tunnel tour (1980s and 1990s), a modern tunnel was constructed along the base of the wall (several dozens of meters long) at the Roman street level. It supports the old city structures above it, which were built above the Roman street level during the Medieval periods.

A large number of  large stones were found laying around the Roman paved street. They were thrown from the temple above into the street by the Roman soldiers, during the leveling of Jerusalem, after it was captured and burnt. This evidence of destruction was also found in the South-West Wall excavations. 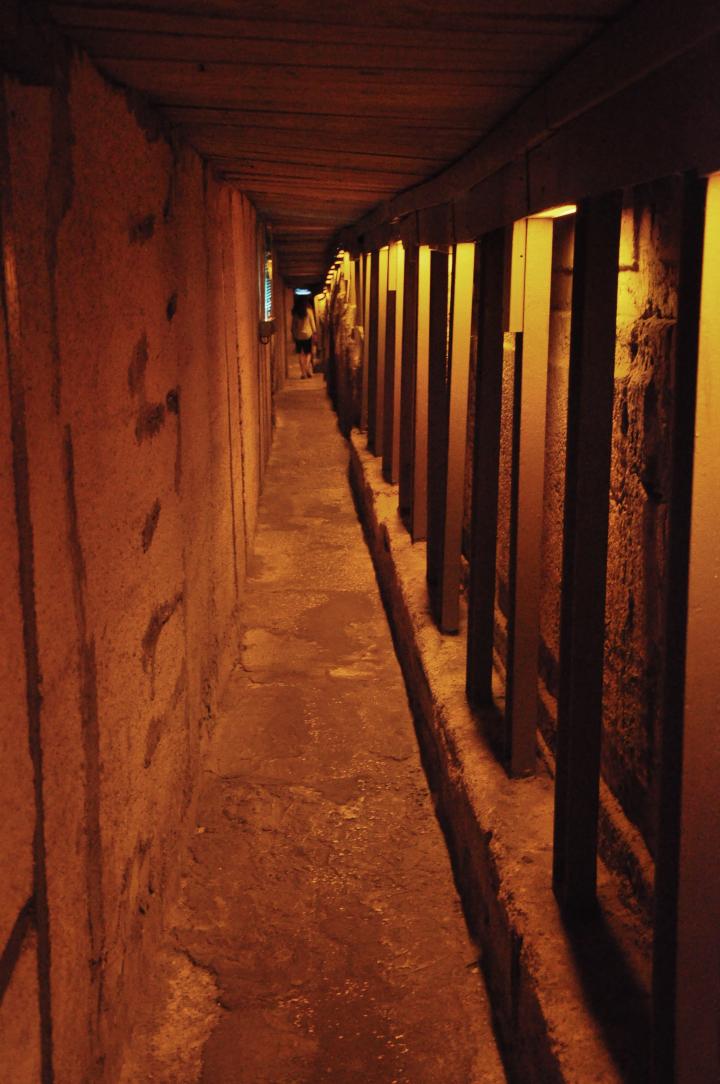 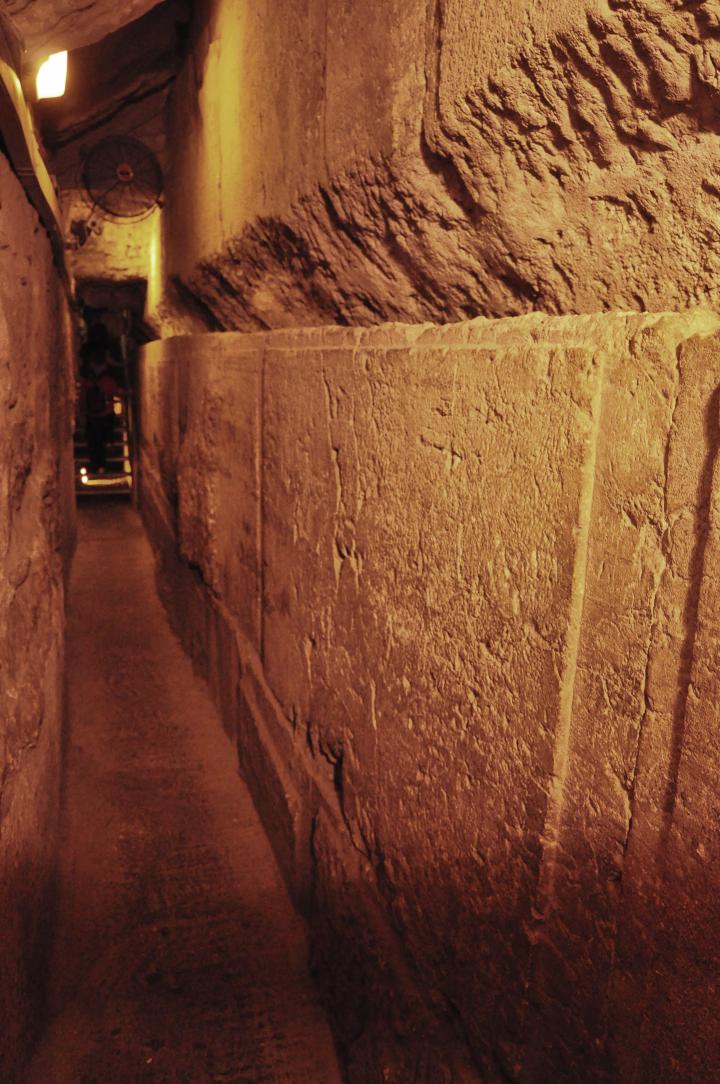 Another section of the dressed bedrock is seen below: 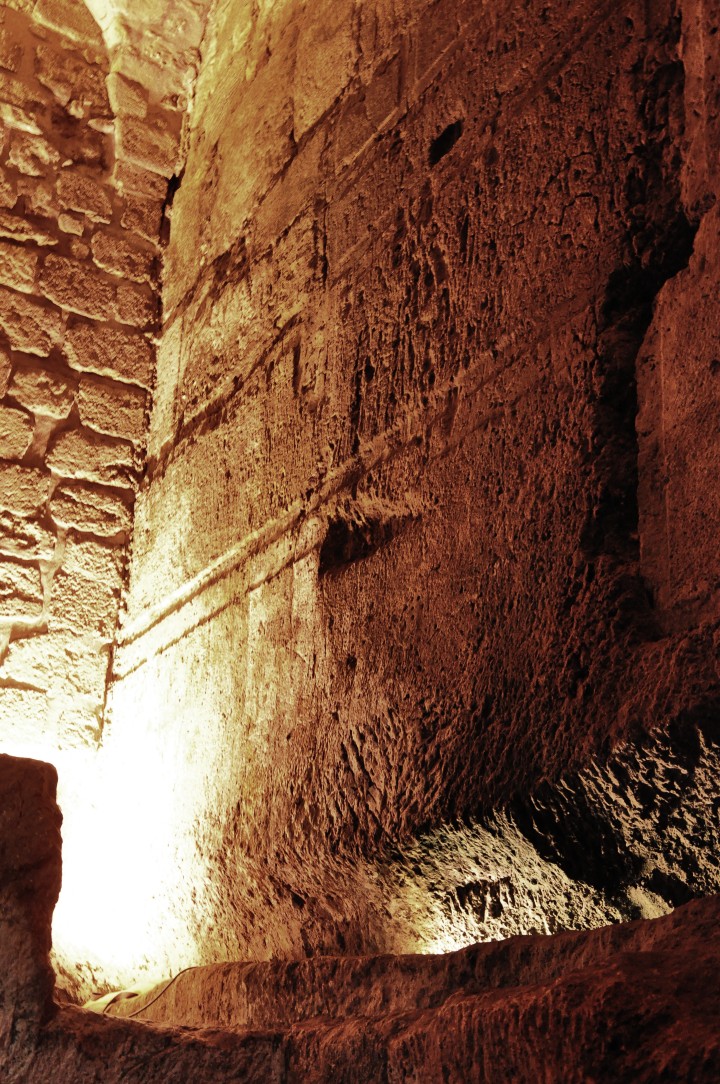 The western section of a Hasmonean period cistern was located at this section. 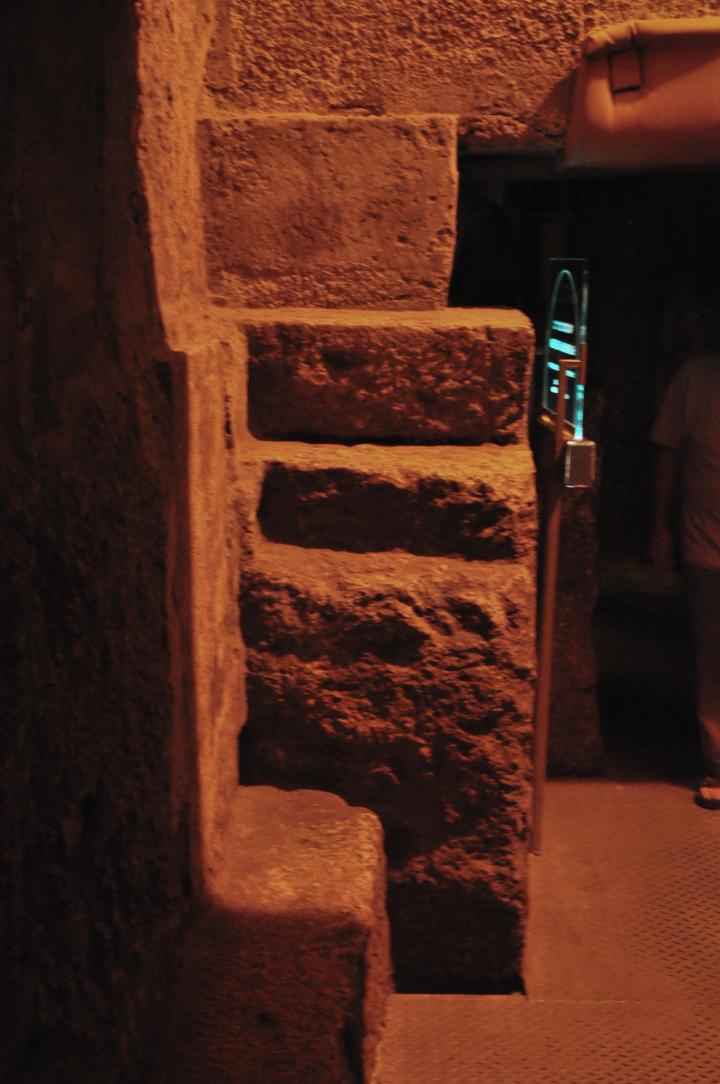 A large stone was found that served as a guardrail on the edge of the ancient street. It protected the people from falling into the open trench, which was used to collect rain water from the street. 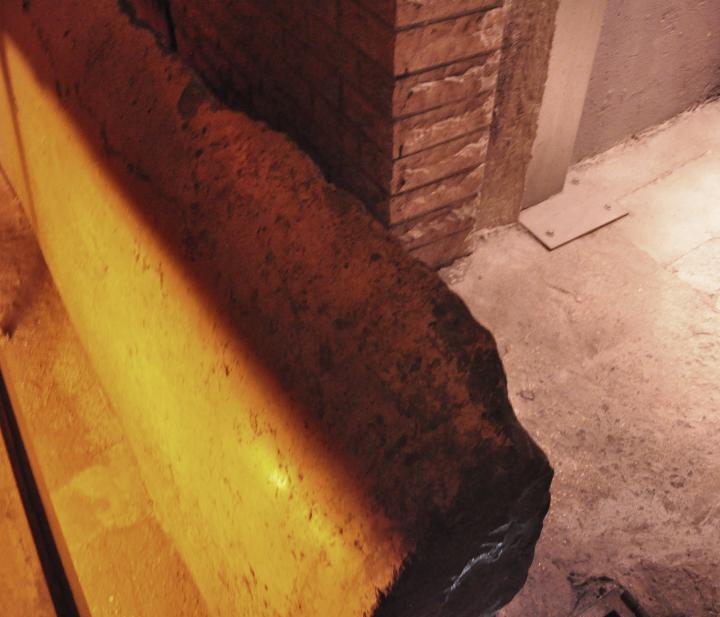 A section of a second temple period (Herodian) paved street was found in this section.  The Roman street  stretched along the western wall, from the north to the south.  Only a small section of the street was uncovered. 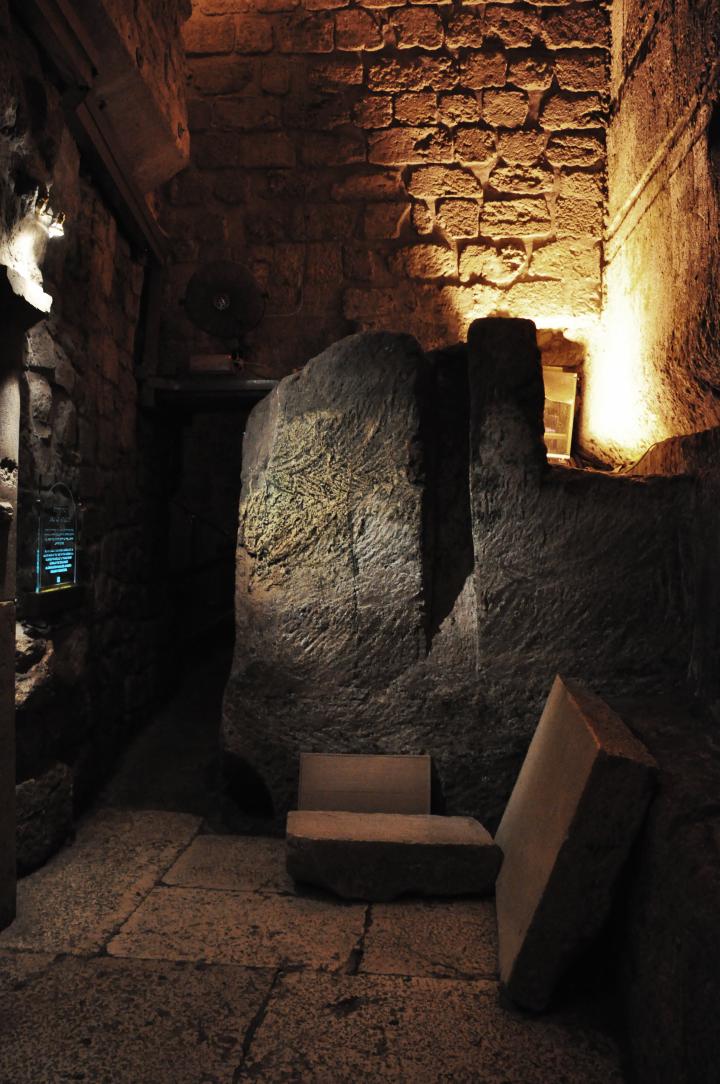 A pair of columns, part of the colonnaded street, are seen on the edge of the street. As in the Cardo Maximus street, shops were located along the street along the side of the wall. 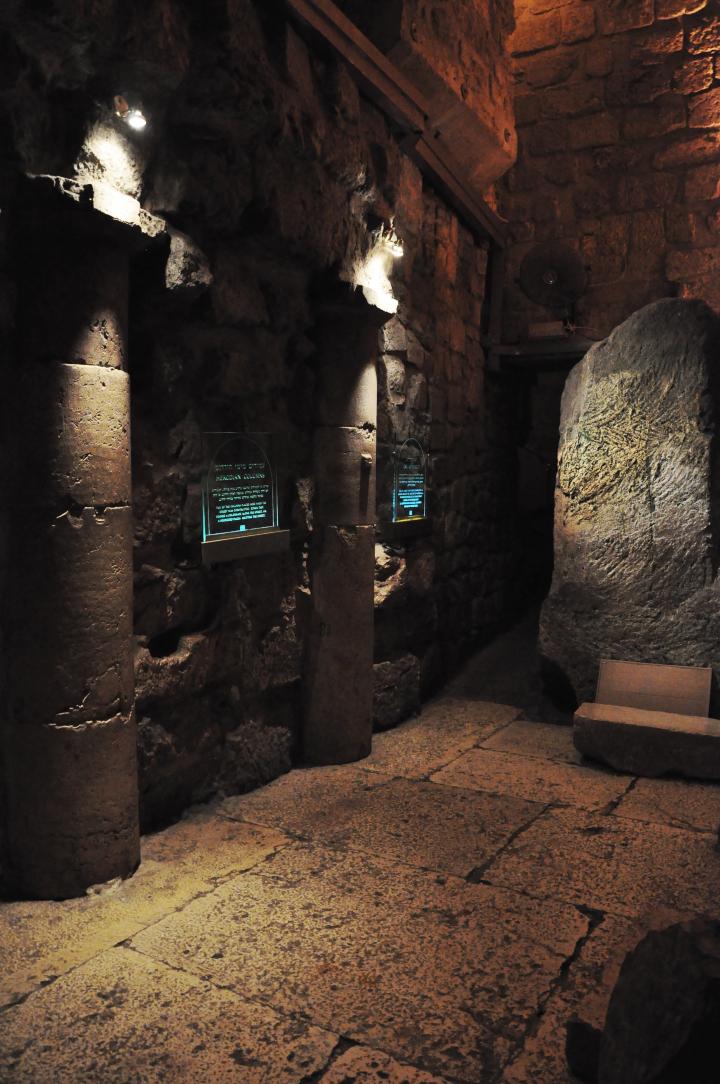 The section near the Herodian street was part of a stone quarry, which prepared stones for the western wall. 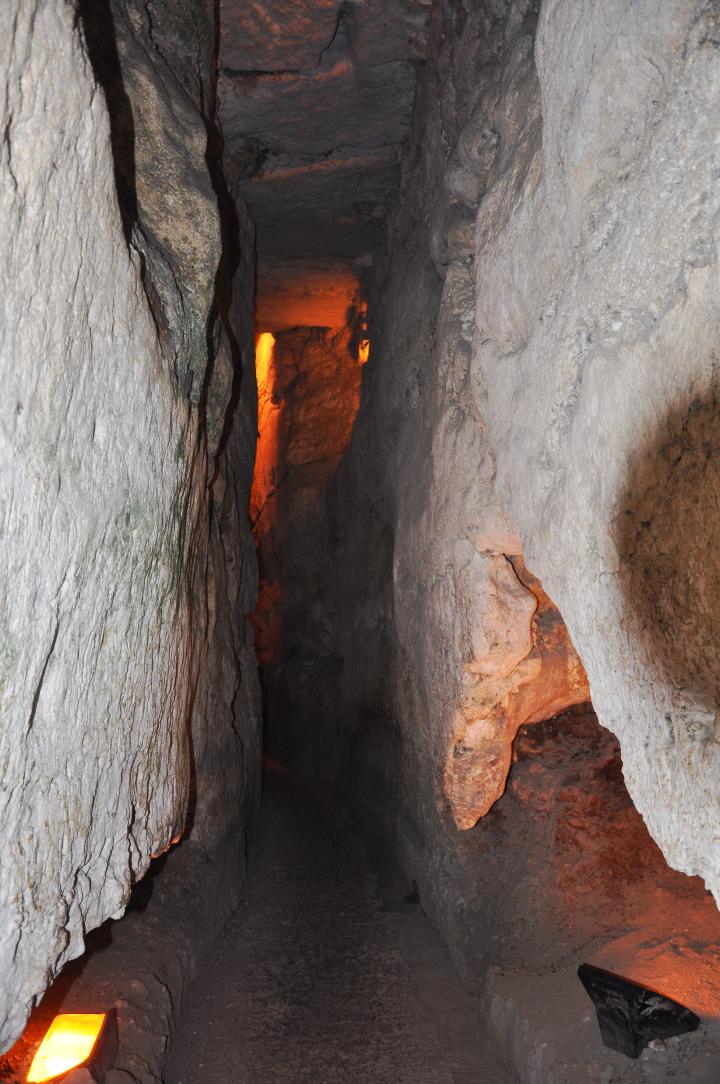 The water channel was cut off during the Herodian period when the temple mount was enlarged to the north. 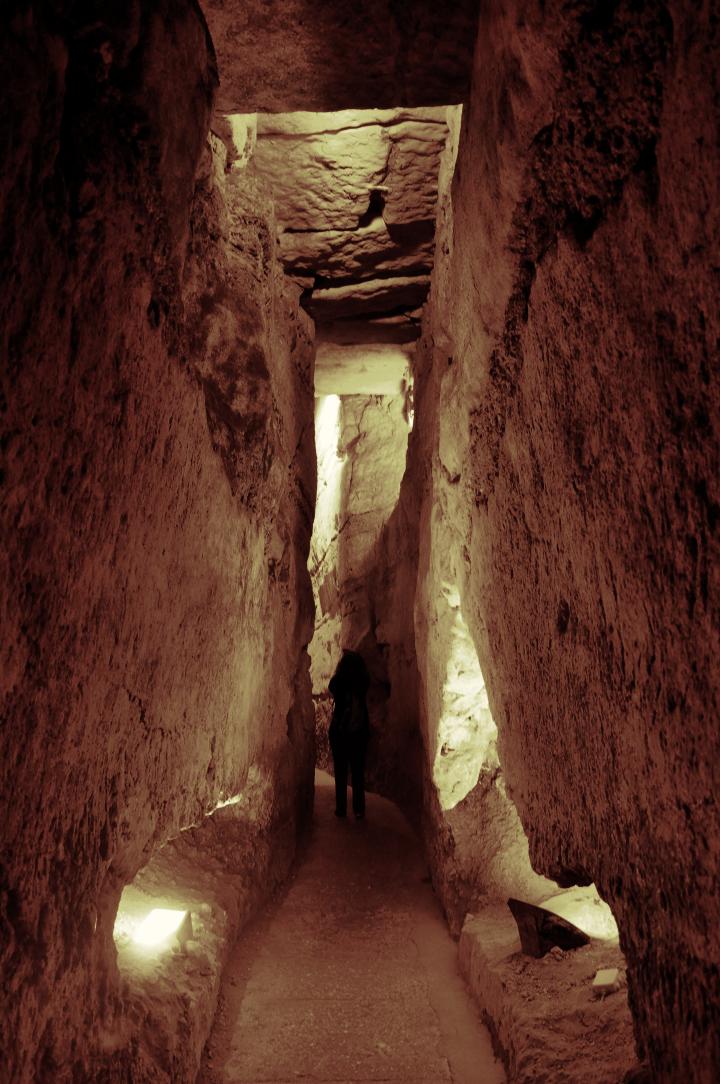 At the northern edge of the tour is an ancient water reservoir called the Struthion Pool. This large reservoir collects the winter rain water from the rooftops in order to supply water during the dry summer season.

Initially it was an open pool, built by the Hasmoneans, and mentioned by Josephus in his accords of the siege of Jerusalem (Wars 5 11 4 ): “For there were now four great banks raised, one of which was at the tower Antonia; this was raised by the fifth legion, over against the middle of that pool which was called Struthius“. The meaning of the Latin word is “sparrow”.   The pool was later covered by the Romans in the 2nd century. 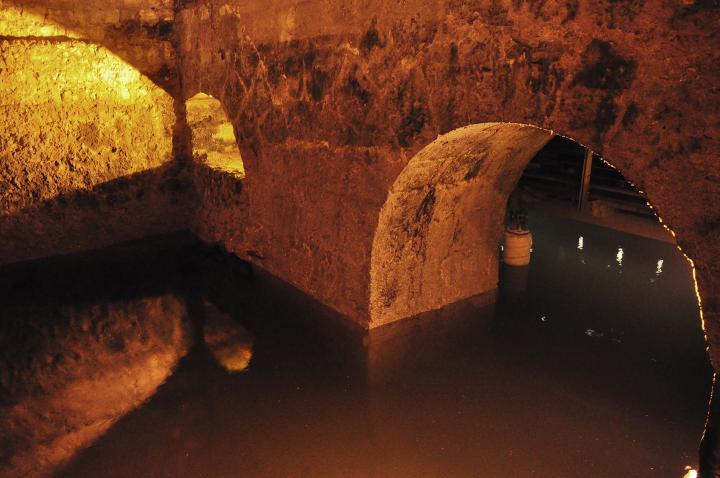 The Struthion pool is located at the basement of the Notre Dame De Sion (Ecce Homo) monastery. The initial plan of the tunnel tour was to exit through the monastery, but this was not accepted by the order. Alternatively, the exit of the tour was diverted to a modern opening through the pool, located near the first station of Via Dolorosa. 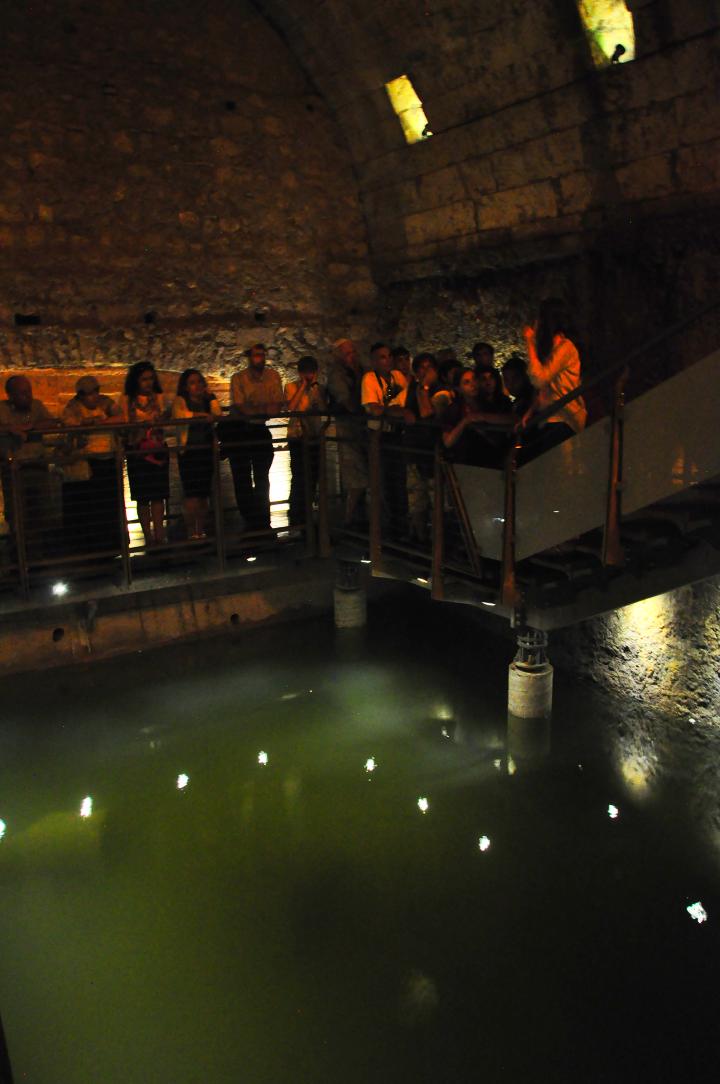