The holiest site for the Jewish religion and the heart of the Israeli nation. The wall was part of the great temple of Herod, over 2,000 years ago.

The Western Wall is a remnant of Herod’s grand temple, and is the most holiest site for Jews. It attracts  thousands of Jewish worshippers daily, who come to pray and lay out their problems and seek for heavenly guidance. They feel the presence of God’s spirit, who according to their belief resides for thousands of years in the holy temple.

Song of Solomon 2:9: “My beloved is like a roe or a young hart: behold, he standeth behind our wall, he looketh forth at the windows, shewing himself through the lattice”.

The Western Wall is located on the western side of the temple mount, in the heart of old Jerusalem. It is approached from the Jewish quarter, and the closest gate is HaAshpoth (Dung) gate.

The area is divided to 4 sections: a large open zone on the western side, a small section for women on the south side of the wall (there is segregation due to religious requirements), a larger section of the wall in the center for men, and a covered place in the northern side.

The walls are 20M high above the ground, with 25 layers of stones. The larger stones are in the lower layers. Another 7M (15 layers) are buried under the ground, and some of the buried earlier layers may be from the first temple. The lowest section of the wall can be seen in the northern section of the central drainage canal.

Herod the Great, King of Israel under the Romans (37BC – 4BC), enlarged and rebuilt the second temple, and made it a magnificent temple. A reconstruction of the temple is seen on the illustration, with an indication of the western wall. 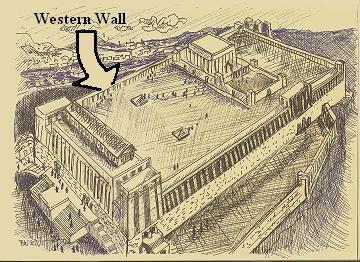 After the total destruction of the temple in 70 AD, following the Jewish revolt against the Romans, only a few layers of the grand temple were left, and the Jews were not allowed to rebuild their temple.

The worship at the site of the western wall started after the destruction, and was referred in early texts in the 3rd-5th century. For 2,000 years the Jews came to the site and prayed for the rebuilt of Jerusalem and the Jewish Nation, since the fate of both coincided at the same time. For many times during the history the Jews were forbidden to approach the site, or were harassed while doing so, or had to bribe to get into the site.

In 1967, after the 6 day war, the prayers and tears of 2,000 years were answered: the holy site returned back again to Jewish control, and was opened to the public. The area before the western wall was razed down to allow the multitude of worshippers to assemble in the site.

Along the outer Northern Western wall, a tunnel of 300M was dug (1987-1996) along an ancient aqueduct and revealed the hidden Herodian Wall.  It starts from the Western Wall and reaches Via Dolorosa. The site, the Kotel tunnels,  was opened in 1996 and sparked riots.  Today it is is open and is a major attraction, which is detailed in a separate web page.

The Western Wall is located on the west side of the Temple mount. In this view, taken from the steps leading to the Jewish quarter, you can see the open area in front, behind it and along the wall are the prayer areas, and on top of the Temple mount is the golden Dome of the Rock shrine. 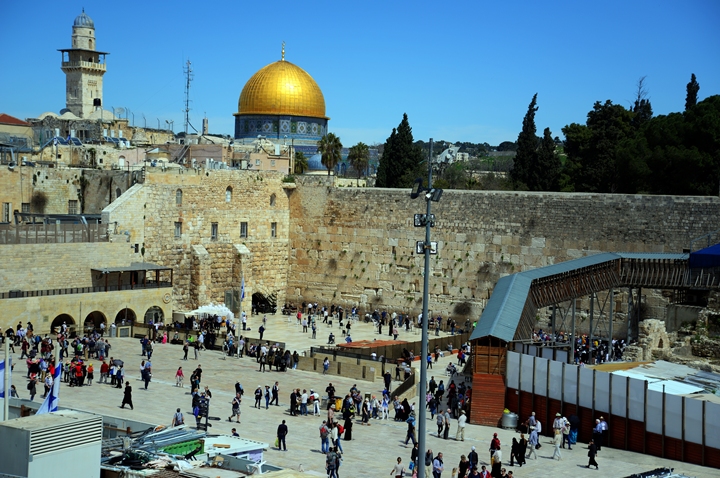 The prayer plaza in front of the western wall is seen here from the west side. 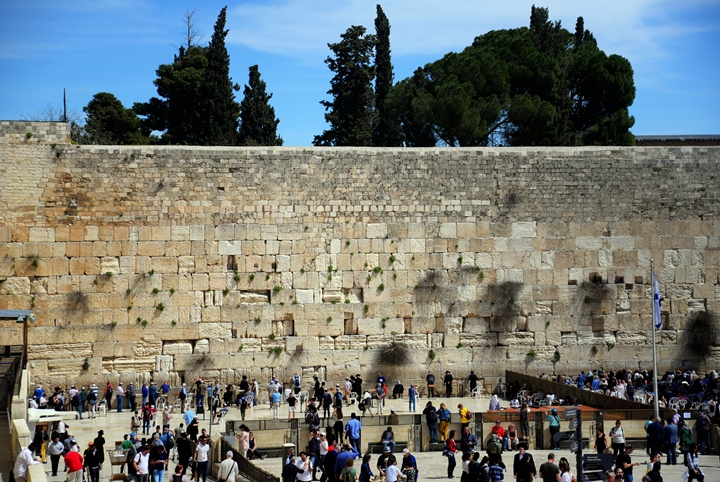 A closer detail of the prayers near the wall. The visitors push notes into the cracks between the stones, and write requests that they hope will be read by the Divine spirit, and their wishes will be granted. 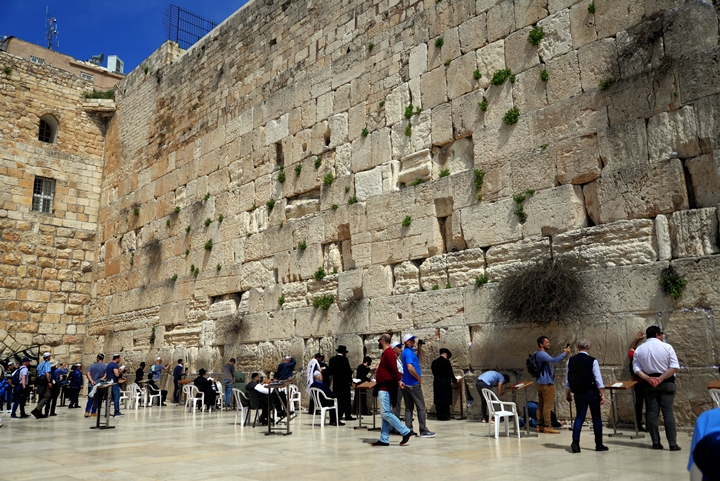 You can put your own wish note in the wall: write your own message that will be placed within the stones, using the web page in the links section. 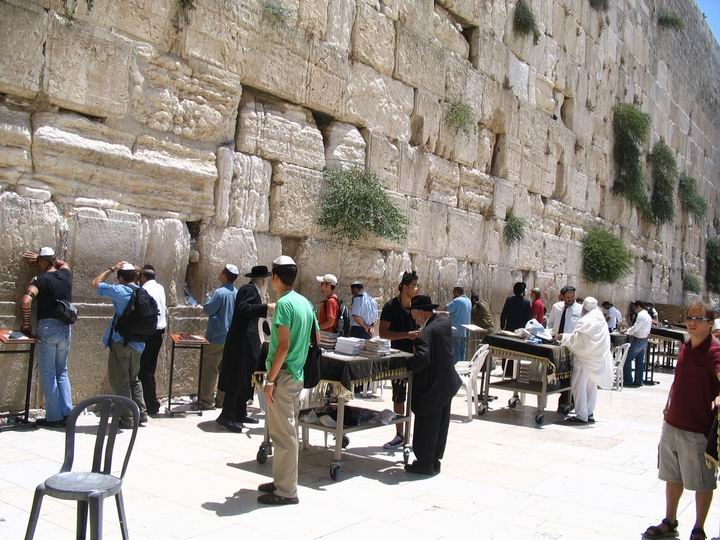 A closer look at the wall… You can notice the hundreds of notes stuck into the cracks on the lower 3 layers.

The weeds that grow between the cracks are sacred and should not be picked off the wall, unless used for “medical” purposes.  For example, some women used in the 19th C to boil the leaves and drink the soup in the hope of getting pregnant. In the past visitors used to hammer nails between the cracks for good luck, and based on references below. 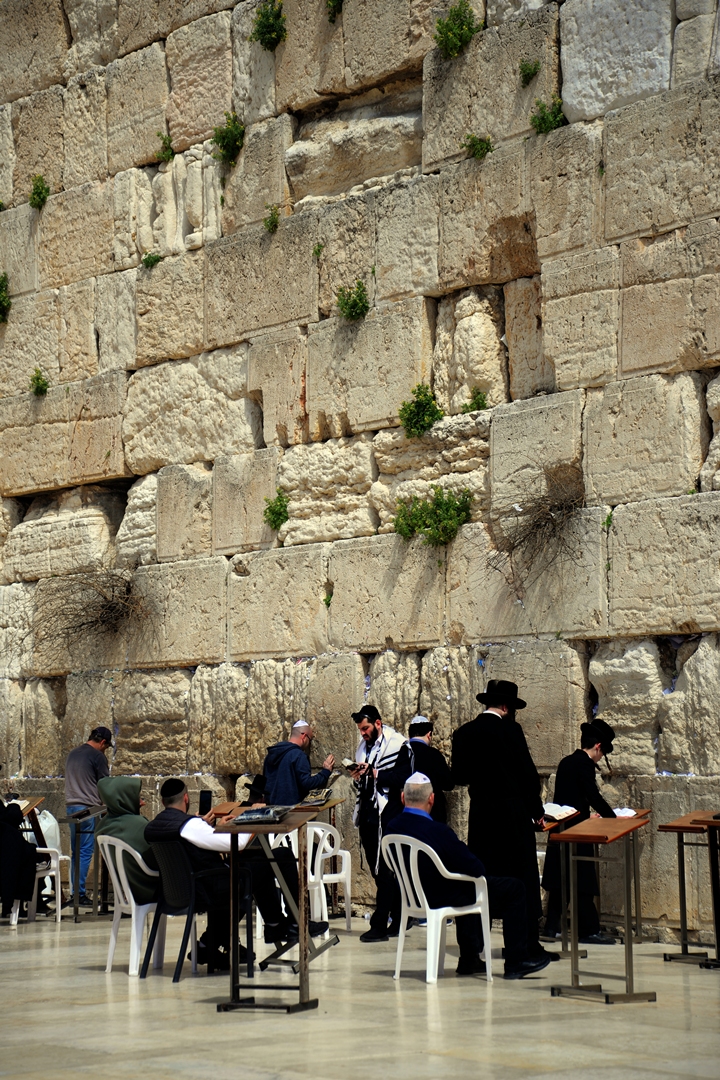 Another view of the wall is seen below, with Itai reading the Psalms while holding on to the sacred stones. 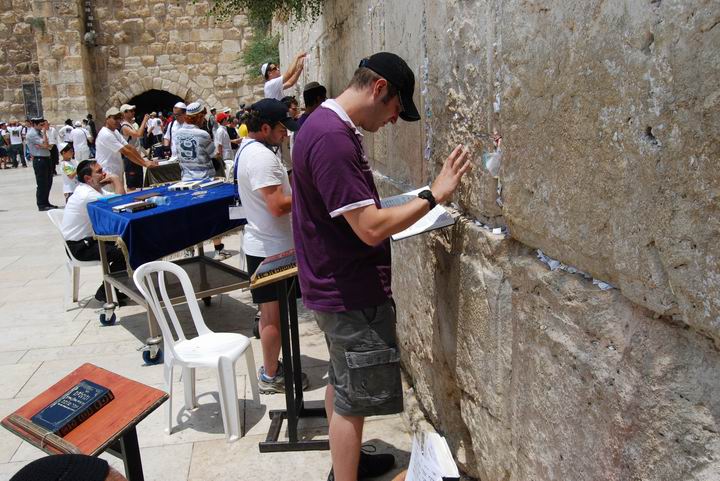 On the rear of the prayer area are stacks of Bibles and Jewish religious books, such as the book of Psalms. 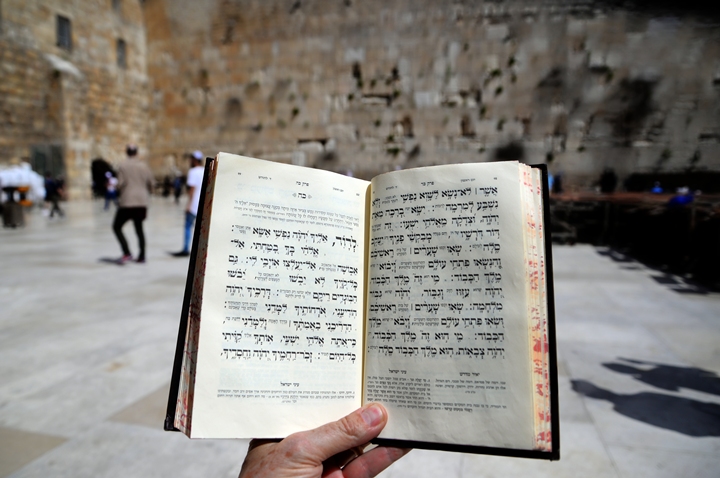 From the level of the western wall plaza, on its south side,  is a wooden bridge that leads up through the Mugrabim’s (North-African’s) gate to the temple mount. Behind the gate is the grey dome of Al Aqsa mosque. 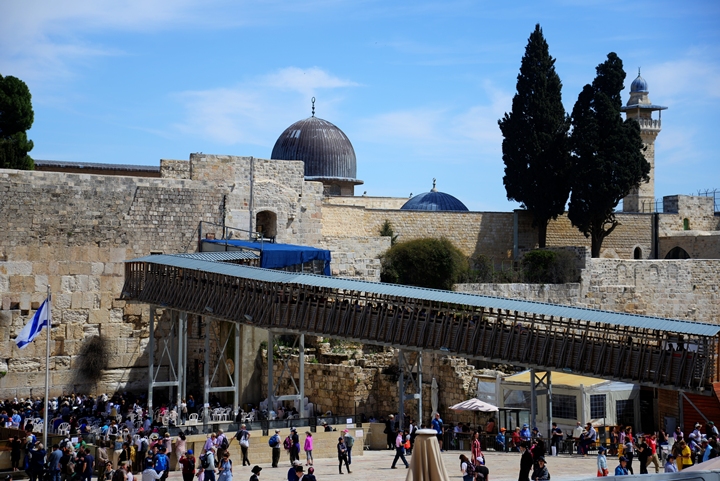 The walkway is the entrance for Jews and tourists into temple mount. The following picture was taken from the wooden bridge . 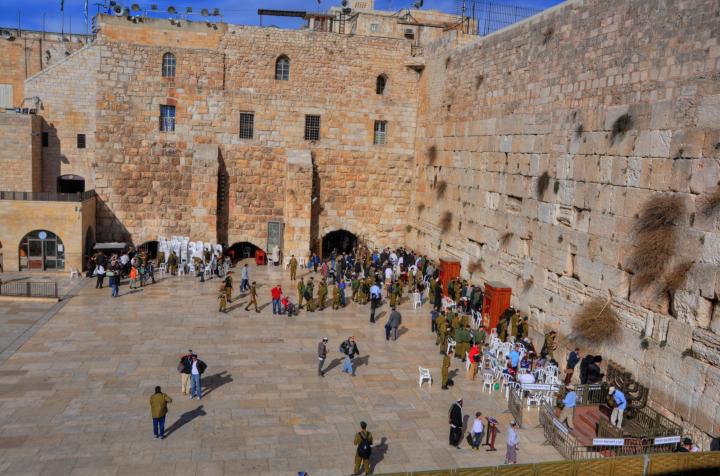 On the north side of the men’s prayer section is an entrance into an open gate. The covered section behind it serves  a synagogue, and dozens pray here in the crowded place. 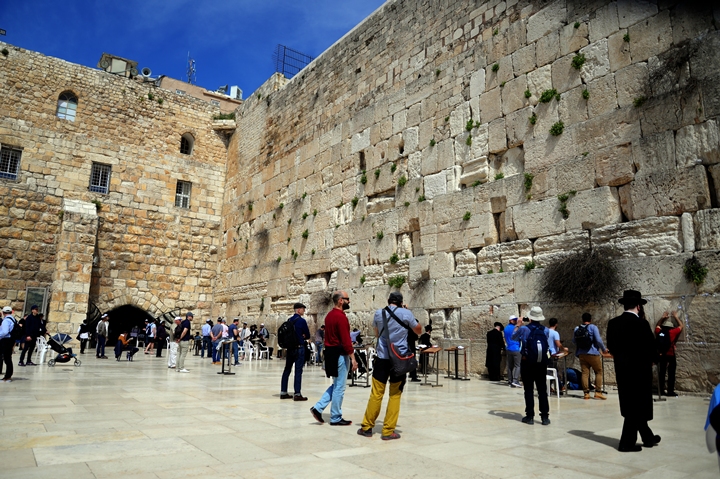 The arch seen in the roof is the Wilson arch, which was discovered in the 19th C by the British explorer. It was built in the Crusaders or Arabic period, but was based on an earlier structure. Its purpose was a bridge and staircase from the “upper city” to the temple level,  similar to the Robinson arch in the southern wall. 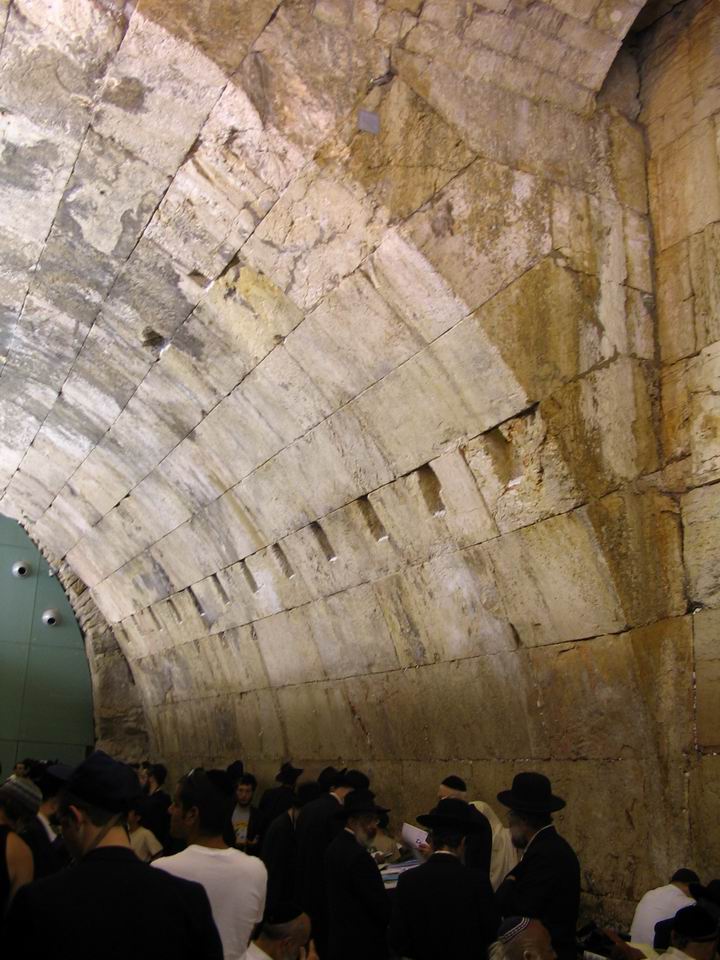 (a) Practice of nails in the cracks

According to Ariel Encyclopedia, the practice of hammering nails in the cracks in the past generations was based on the following biblical references:

“My beloved is like a roe or a young hart: behold, he standeth behind our wall, he looketh forth at the windows, shewing himself through the lattice”.

* From the Western Wall Heritage Foundation: