This page summarizes the sites that feature Roman  streets inside the cities of the Holy Land.

The Romans established well planned cities and based them on a matrix of high quality paved streets. Some of the streets were colonnaded with shops or houses on both sides.

They also constructed good roads between the cities. These are covered in another web page – “The Roman Roads“.

Sites with Roman streets (inside the cities):

The Romans constructed high quality streets inside the cities. The following section shows the sites which feature some of these streets.

Tell Beit Shean (Beth Shean) was a major Biblical city, located in the center of crossroads between the Jordan valley and the Jezreel valley. It later was expanded into a large Hellenistic, Roman and Byzantine city of Scythopolis. The large city was leveled by a massive earthquake in the 8th century AD.

Jerusalem, near St. John the Baptist

A section of a paved Roman road is located on the Christian Quarter street not far from St. John. It was discovered during the restorations conducted at this area in 1977, under the modern level.

This paved section dates to the end of the Roman period – 3rd/4th century AD. In the photo below is a section of the paved Roman road, flanked by modern shops. 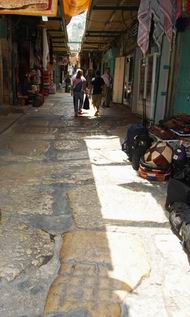 A short section of the Byzantine road at this section. This pavement is part of the “secondary” Cardo, which once connected the Damascus (Shkhem) gate to the Dung (Ha-Ashpot) gate in the south, as seen in the Madaba map. Although the stones were several hundred years later, they followed the same route of the Roman road that existed during the times of Jesus.

The main Road in the Roman city was the “Cardo”. Here in Antipatris, the Roman city established by Herod, the Cardo is oriented in a south-east to north-west orientation, on top of the Tell.

The excavated Cardo extends for 300 M from the fortress. On both sides are traces of the ruins of the Roman/Byzantine city. Shops and public houses were built along the road. On the left side are ruins of a Roman villa, and in the center is the Forum – the city center.

This is the main colonnaded street of Hippos. It runs a total length of about 500M , connecting the city’s two gates along its main axis. The street is named “Decumanus Maximus”, the Roman word for east-west main street.

This colonnaded road, 6-7M wide, crossed Tel Dor all the way from the eastern gate to the west side, splitting the city into a north and south section. The photo below shows a view towards the western side. The road was paved  between the two lines of stones (now gone), and the covered sewer tunnel ran in its center.

The southern gate and walls of the Roman city  include twin round towers, walls, bridge and the entrance street to the city. It was in use for 1,000 years since the city was established in 18AD.

The cobble stone road approached the city, following the eastern outer city wall.  The road was paved in the 9th century BC, and had been in use until the 4th century AD. Pottery finds on the road  include shards from all periods, from the Bronze period up to the Roman period.

Sections of the inner city streets were also excavated and reconstructed.

Shomron (Samaria) was the capital city of the Northern Kingdom, established by Omri and Ahab. An important Hellenistic and Roman cities in the Holy Land.

The Roman colonnaded street of Samaria is a famous landmark. The street connected the west gate (as above) to the east gate (now gone).   This section is marked on the map as a red square. The street, 12.5m wide,  is about 1Km long.