A Nabatean quarry cave and ancient farming lands, located south of the ruins of Nitzana (Nessana). Visit to these sites is a  nice walking tour in the area of Nitzana.

The cave is located 1.5km south-west to the ancient city of Nitzana.

You can park your car on the side of the old road from the ruins of Nitzana, and walk to the cave. Near it are ancient terraces – the traces of the Nabatean farming sections. You can also continue to walk around the cave from its east side, and view the Nabatean farming lands on the north side.

The location of the Nitzana cave, and the Nabatean farming areas around it, are indicated on the map. 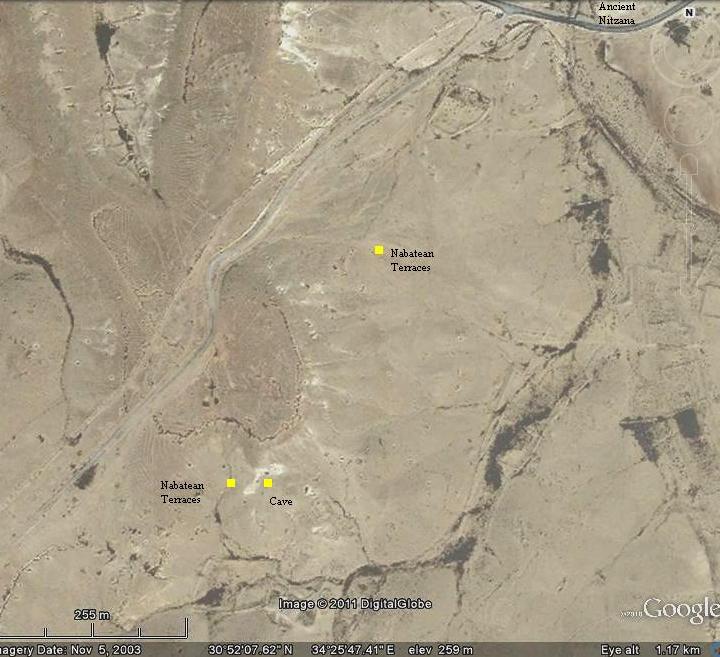 A view of the cave and the farming terraces is seen in this picture. Both are the works of the Nabateans, more than 1,500 years ago. 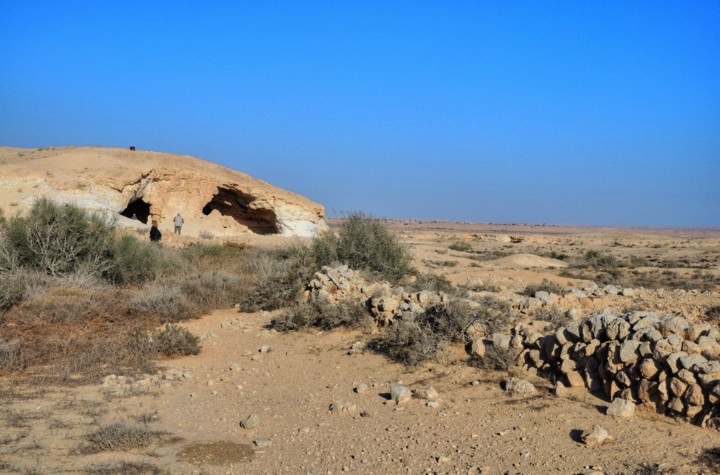 The cave was used by the Nabateans for cutting building blocks and gravel, which were shipped to the nearby city of Nitzana. The stone wall on the right side is part of the ancient farming lands cultivated by the Nabateans. 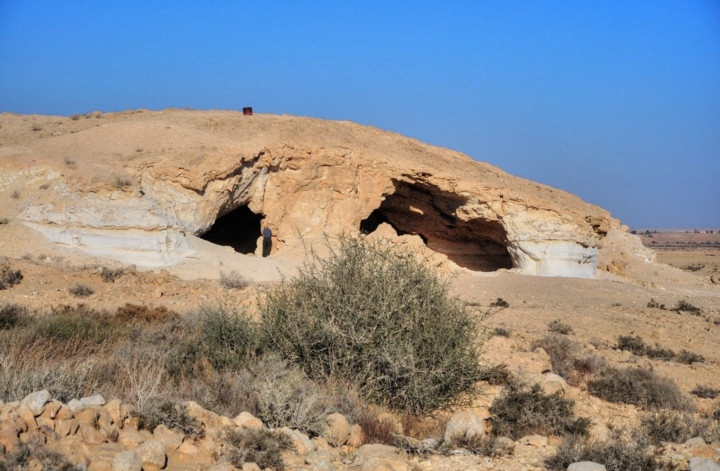 The cave has several entrances from the south side. 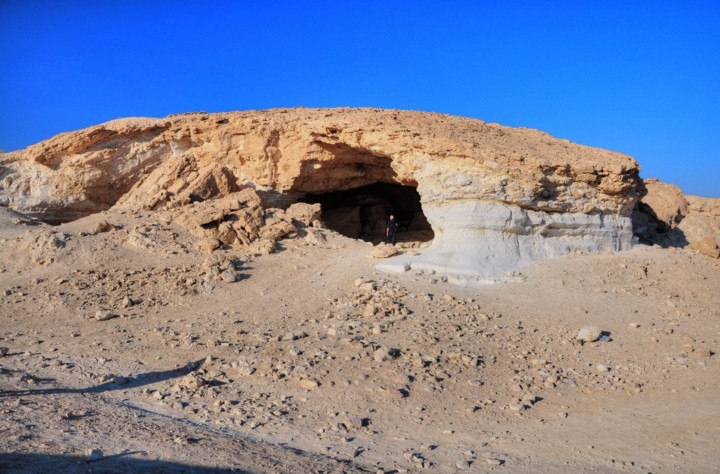 The size of the cave is roughly 20m x 80m, with an average height of 5m. Some of the ceilings and walls inside the cave have collapsed. 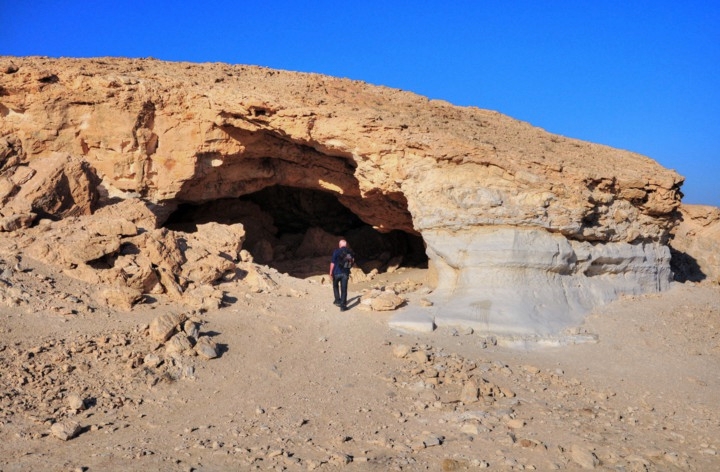 To explore the cave, there is an easy access through the opening on the south-east corner. 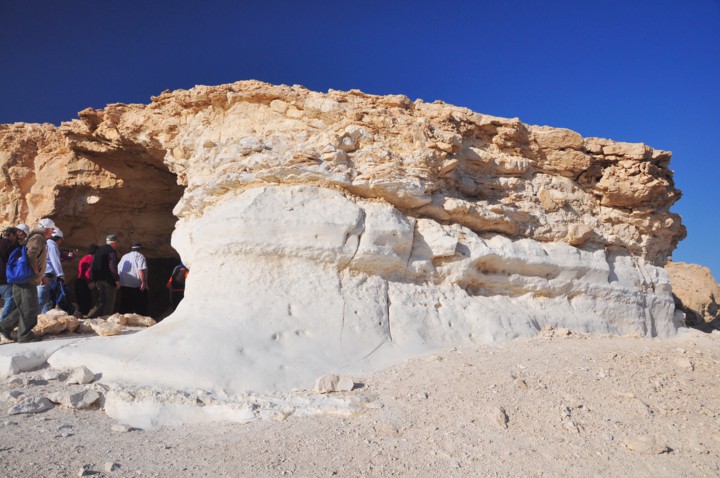 Inside the cave are supporting columns. 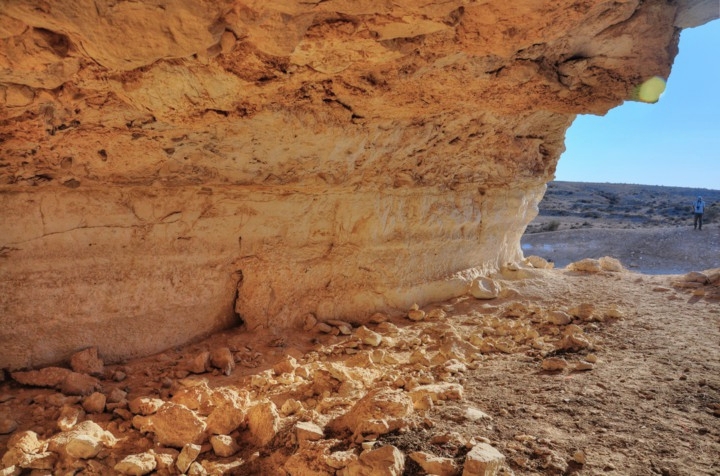 Inside the cave, you can notice the areas where the Nabateans cut away the stones. The hewn rocks were hauled to the nearby city.

The typical Nabatean houses were 2 or 3 level buildings, made of stone without cement. The walls were composed of three types of stones: The lower level of the exterior side of the wall is based on larger, roughly square hewn undressed hard limestone blocks; The middle level of the wall had smaller smoothed and dressed medium-hard stones; The upper level and roof was usually a soft, lighter chalk. No wooden beams were used in these private structures, except for the churches. 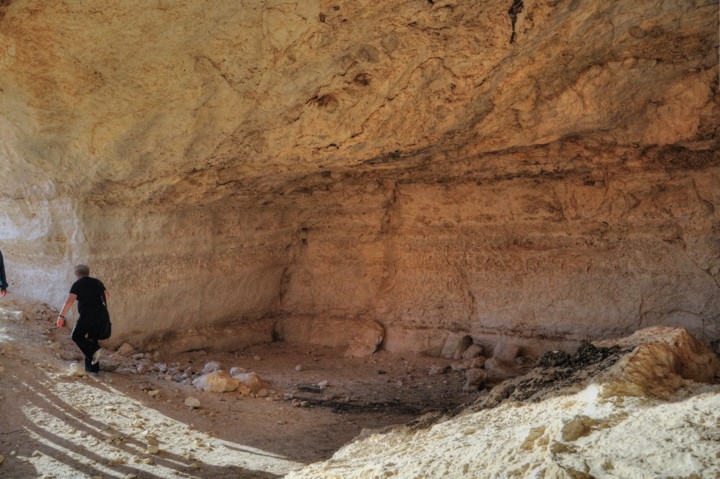 Some of the entrances are blocked by the collapse of the rocks, results of the earthquakes during the past 1,500 years. 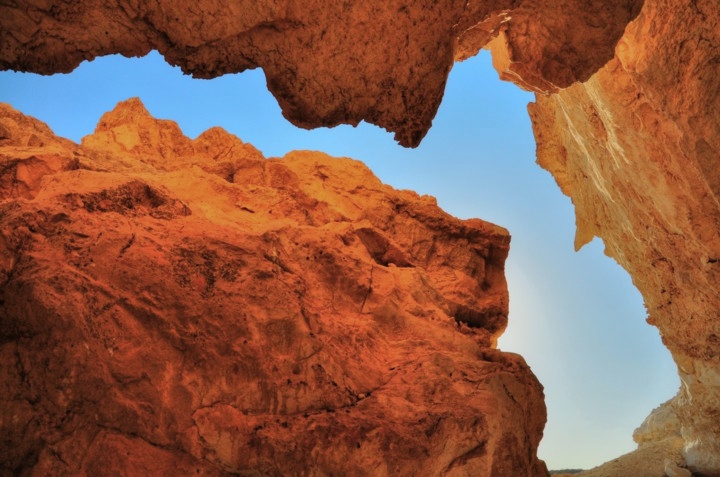 Inside the cave are additional sections where the ceiling has collapsed. 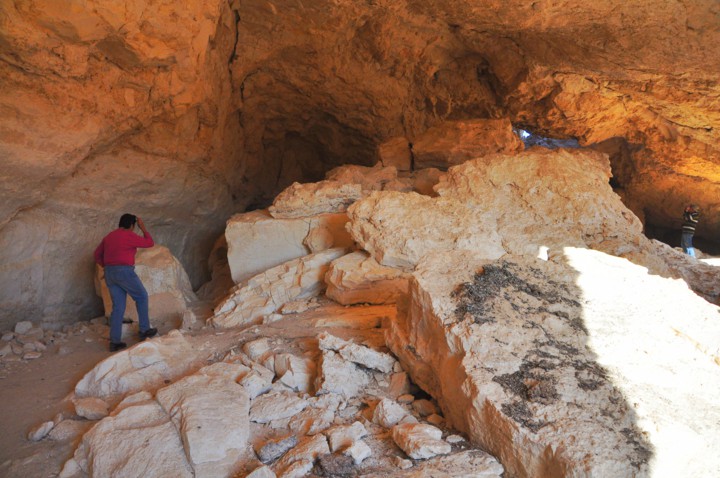 South and north of the cave are traces of the ancient Nabatean desert farming. The following pictures are from the south side of the cave. 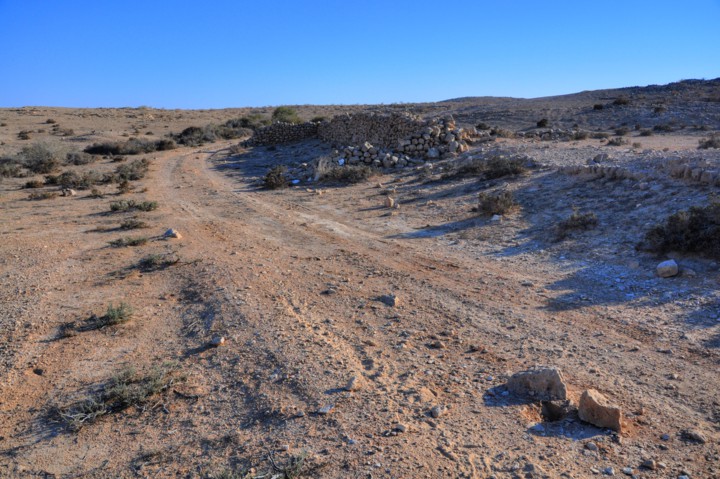 During the Roman and Byzantine periods the Nabateans mastered the knowledge of collecting scarce desert water and using it for farming. They supplied fresh vegetables and fruits to the Nabatean cities, such as the nearby Nitzana, and to the army garrison stationed along the frontier. This desert farming started in the end of the 1st C AD and lasted until the 8th C. 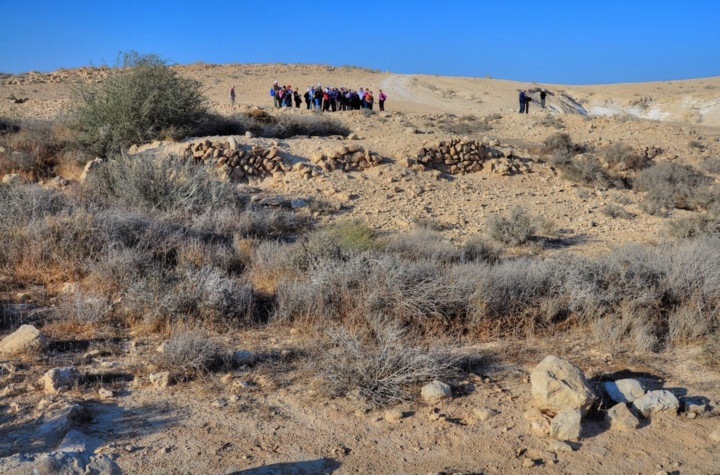 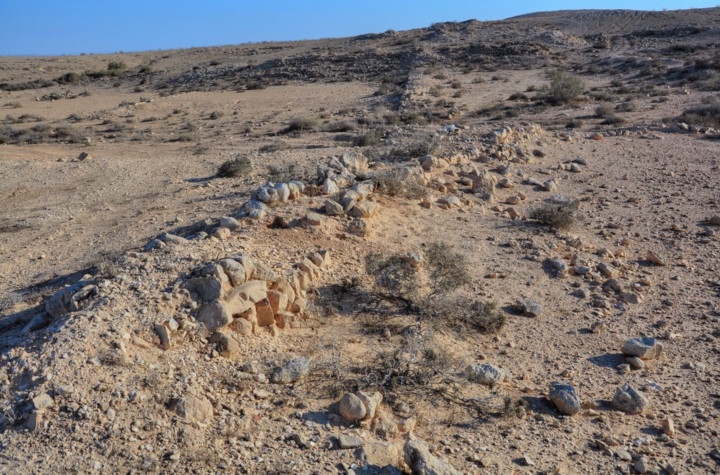 The size of a common farming section was roughly 250m in width (the size of the valley) by 120m (the distance between each separation wall). The total farming area of each section is 3 dunams (0.3 hectares). The researchers found that the ratio of the drainage basin for each such farming module was roughly 25 times larger, so each such section was watered by a drainage basin area of 75 dunams (7.5 hectares). 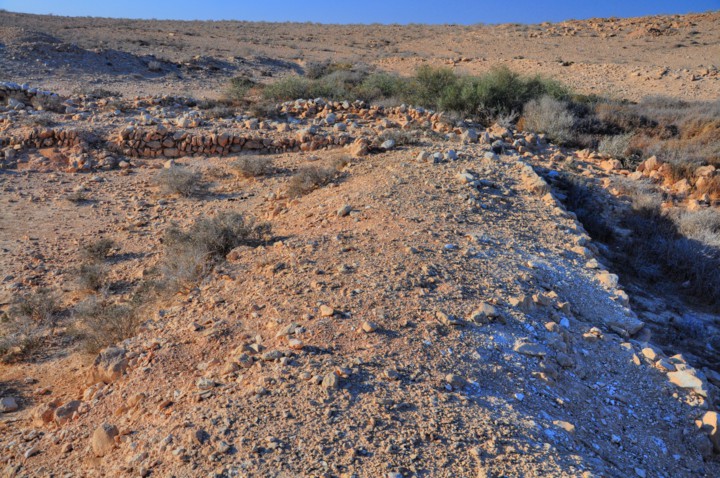 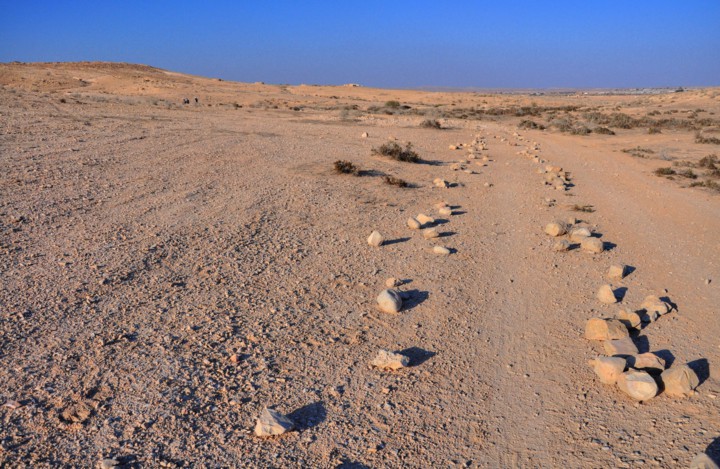 In this north side are more sections of the Nabatean farming fields located in the middle of a small valley. In the section underneath – viewed towards the north – there are three farming sections. 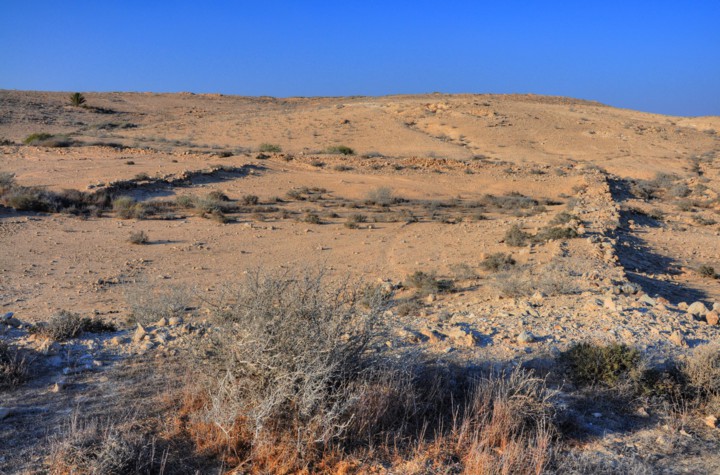 A closer view of the wall along the side of the valley is below.   The Nabateans covered about 40,000-50,000 dunams (35,000 hectares) of farming area in the Negev area, out of a total of 2 million dunams (or, 2.5%). Most of the Negev farming was based on dryland farming (“Baal”) based on rainfall, while a minority of the agriculture was based on  irrigated farming (“Shalkhin”). 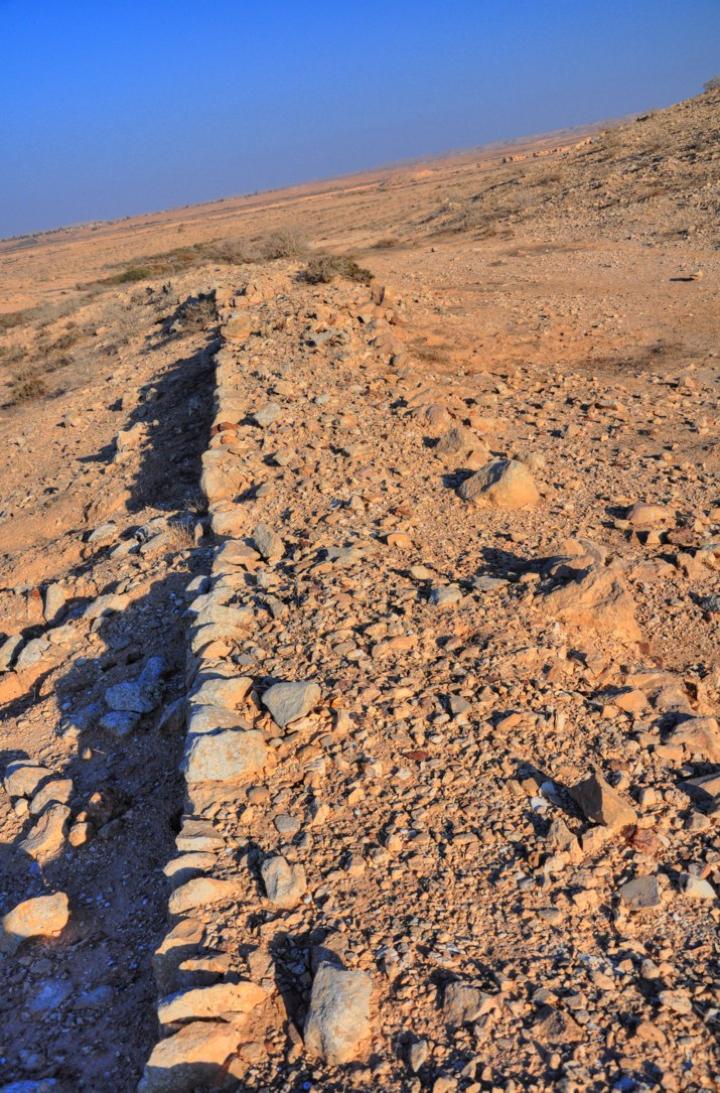 The desert is a great place for biking. We followed a group of kids which came to ride along a desert route. 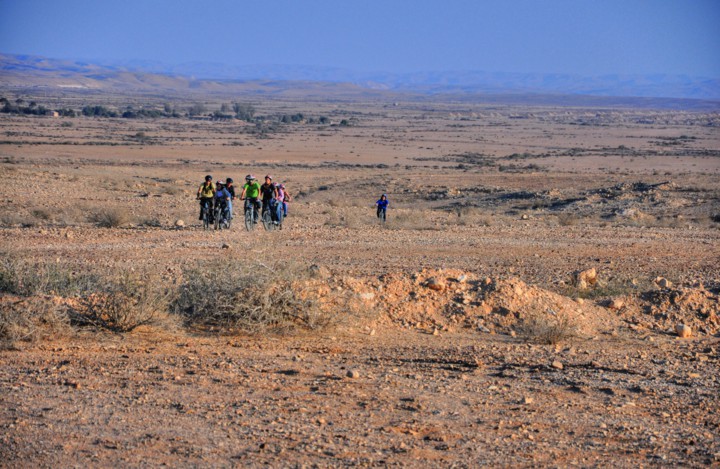 In the Negev are some great biking routes, as well as hiking and motor paths. The desert is where you can get a rich mix of 100% nature with 100% sports. Check our page on extreme sports for more info. 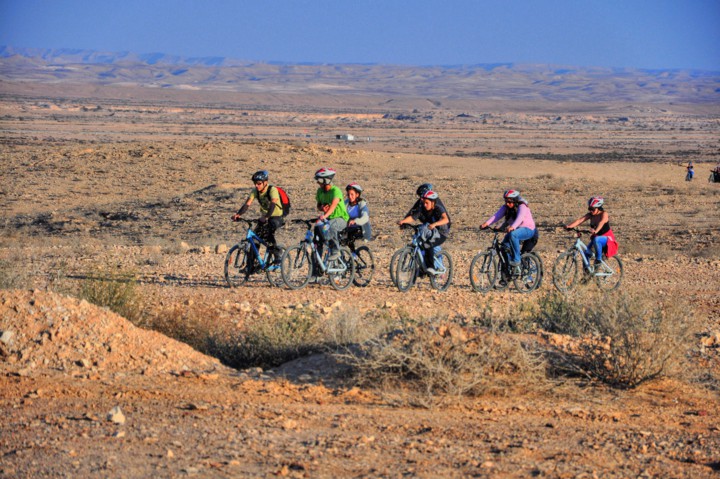 * Other nearby BibleWalks Negev sites: