Khirbet Masref is the ruins of a Roman period village on the shore of the Mediterranean Sea, 1 KM south of Rosh Hanikra – the Israeli-Lebanese border.

This site may have been the area called ” Misrephothmaim” in the Bible, as described in the book of Joshua. (Joshua 11: 8): “And the LORD delivered them into the hand of Israel, who smote them, and chased them unto great Zidon, and unto Misrephothmaim”

The site is also perfect for walking, fishing, and sightseeing – enjoying the interaction between the sea and the sandstone rocks.

An aerial photo of Khirbet Masref and the area around it is shown below, indicating the major points of interest. 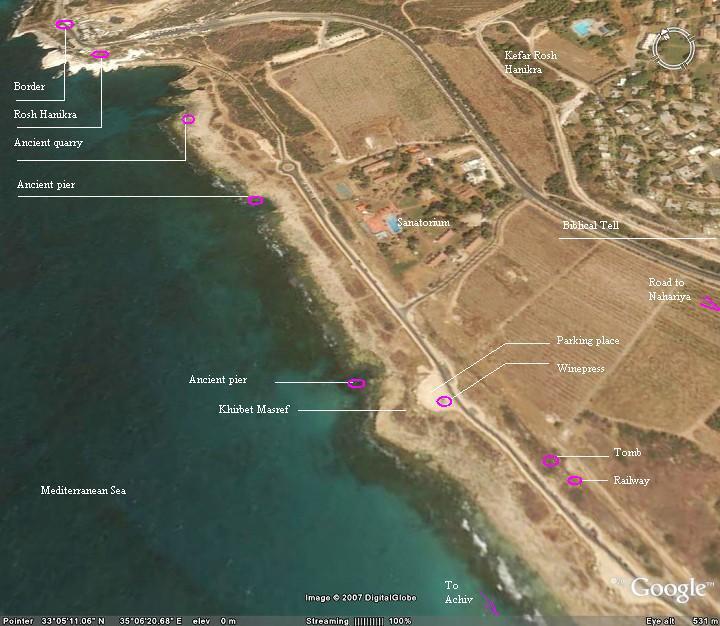 The area was (probably) mentioned in the description of Joshua’s conquest (12-13th century BC), where the Bible described the northern area where he chased the Canaanites.  Joshua 11:8: “And the LORD delivered them into the hand of Israel, who smote them, and chased them unto great Zidon, and unto Misrephothmaim, and unto the valley of Mizpeh eastward; and they smote them, until they left them none remaining”. The term “Misrephot-Maim“,  is identified by some scholars as the salt industry at this site, south of Rosh Hanikra.

Kibbutz Rosh-Hanikra was established in 1949, 1KM  east to the site.

The site is totally ruined with few traces of its structures still visible. Most of Khirbet Masref  is covered by the sand, and other parts were damaged. A boardwalk and  road were constructed and pass at the site, making it easier to enjoy the view of the dominating white cliffs of Rosh-Hanikra, the rocky beach, the sun and the sea. 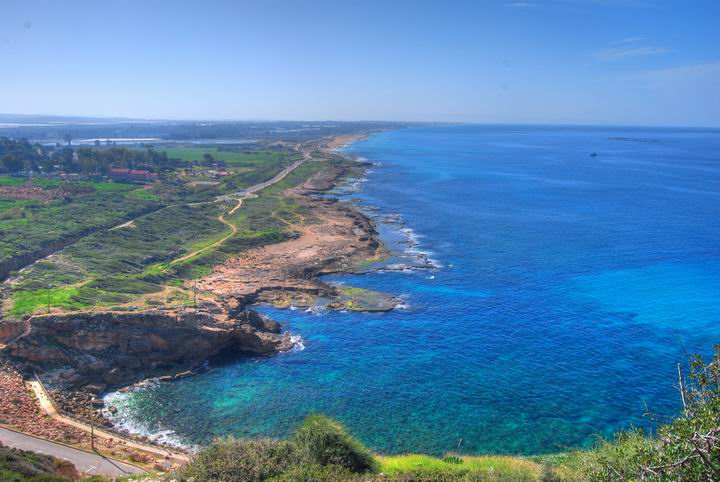 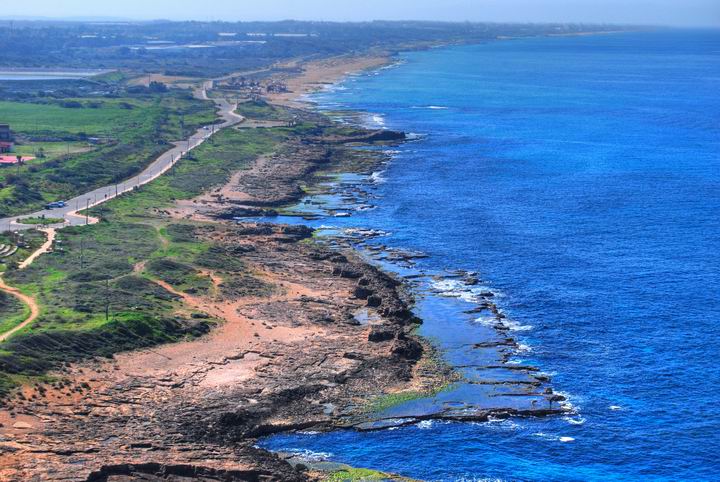 The photo below, taken towards north, shows the shoreline near the site. In the center background is Rosh Hanikra, or the “head of the grotto” – the white chalk cliffs on the left edge of the hill. The hill, called Sulam-Tsor  (“the ladder of Tyre”), extends from this point to the east along the northern border of Israel. 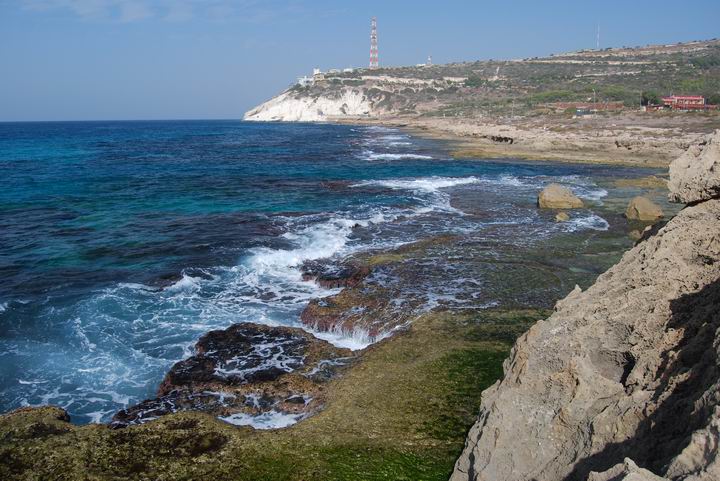 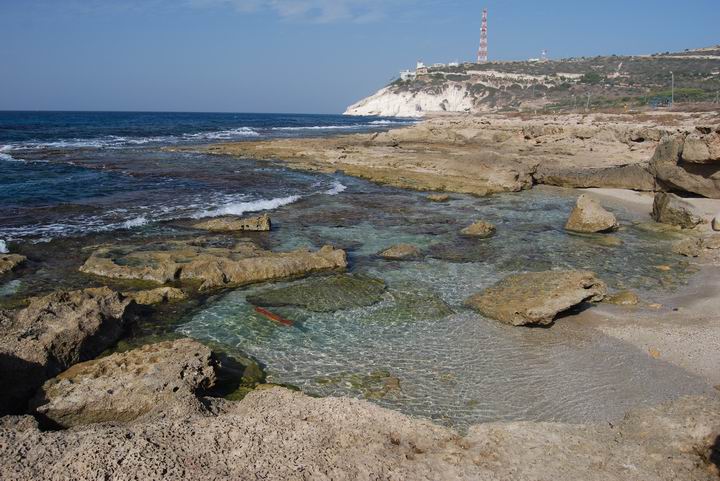 A view of the south side of the site is seen in the panoramic photo below. The whole area is a large sand-stone quarry, and the houses of the village we located around and east to the area. On the right side the rock extends into the sea, creating a sort of “peninsula”.

A closer view of the stone quarry, in the “peninsula”. On the far right is the Israeli Navy boat which is patrolling the area in order to prevent Terrorists to attack Israel from the North. 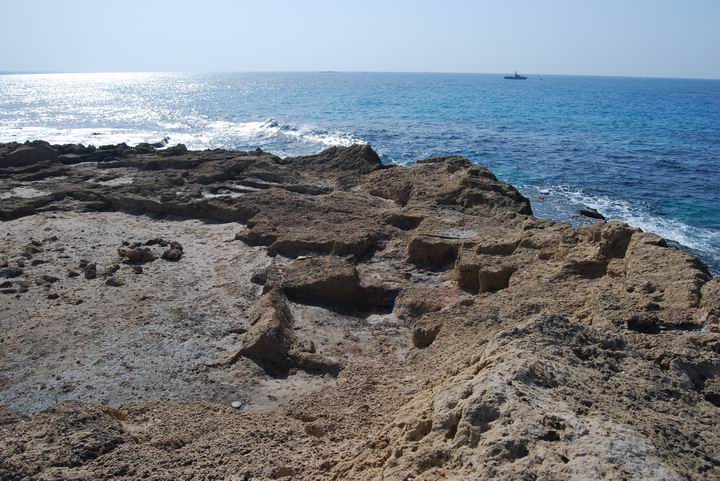 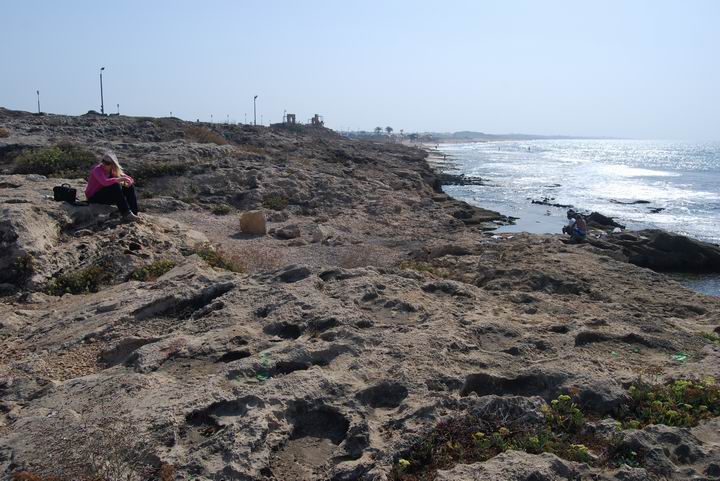 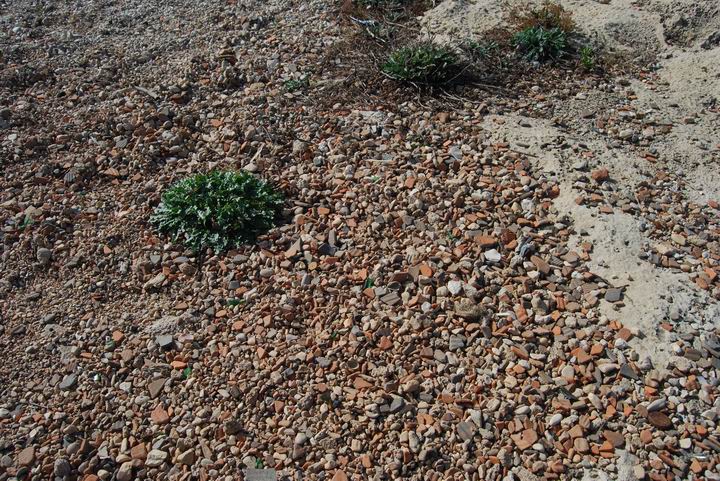 The site’s name, Khirbet Masref (perhaps the Biblical “Misrephothmaim”),  may have been derived from the salt industry. The photo below shows one of the cracks in the rock with a deposit of the white salt. The sea water evaporates in the sun, and the salt remains to be picked up. 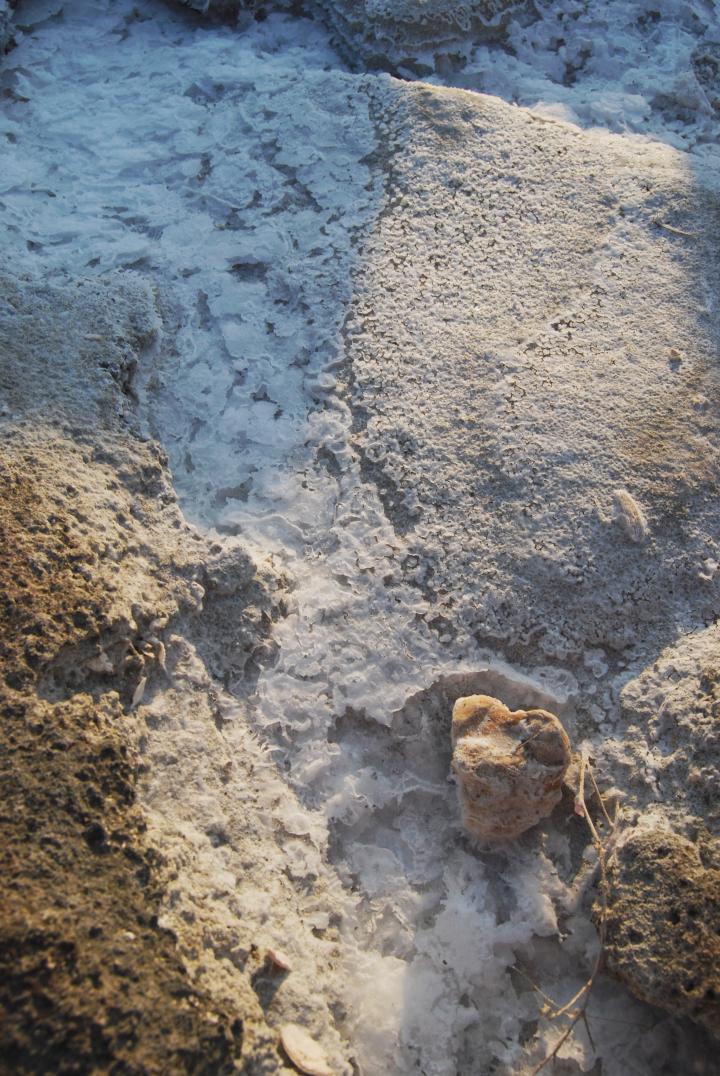 The villagers cut into the rock and built a small pier. This was used to market their products to the main ports around – Achziv and Acre. 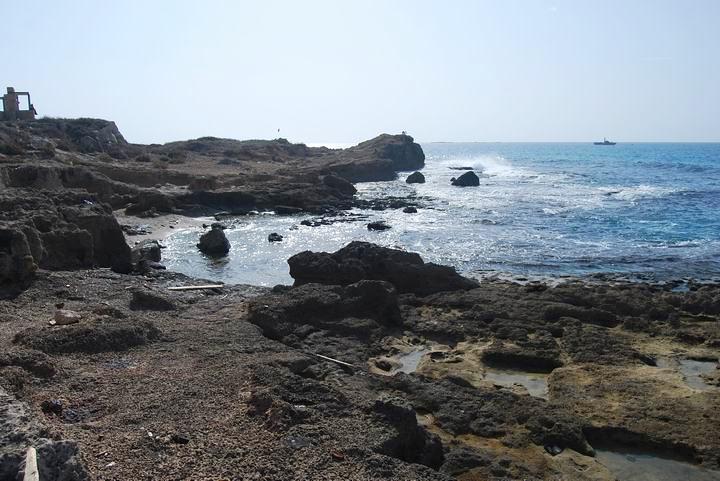 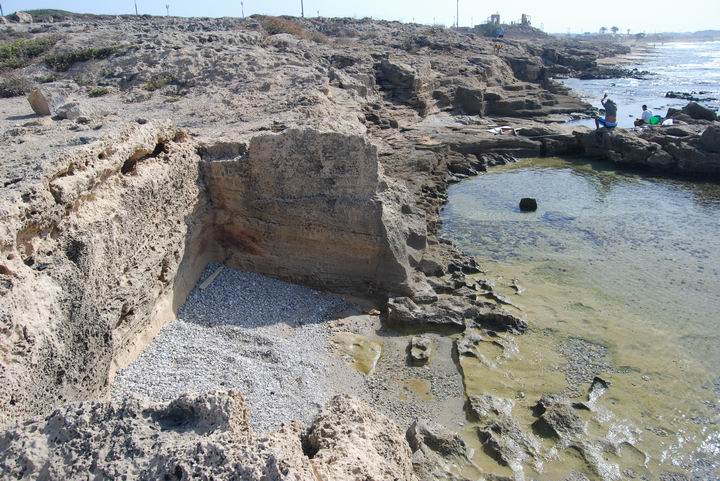 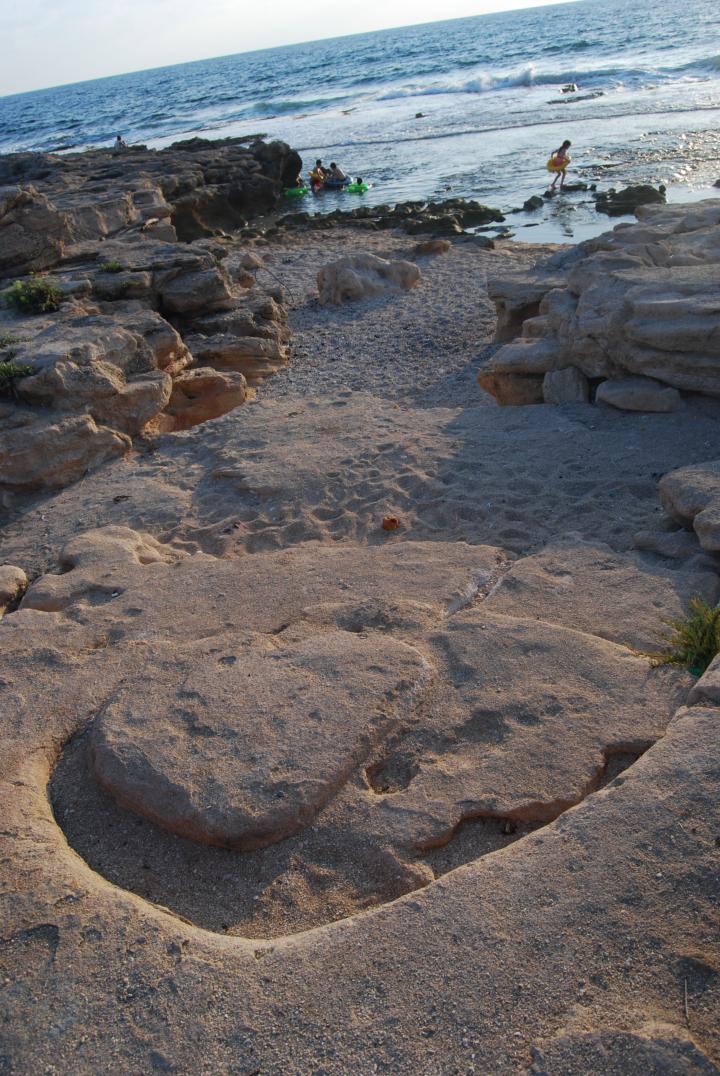 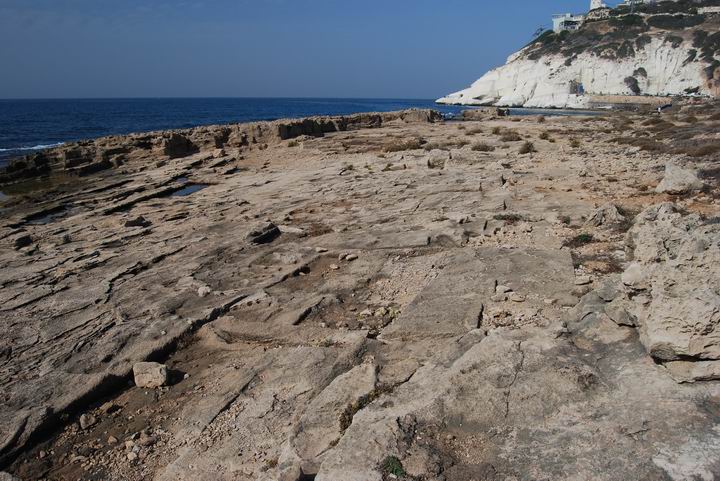 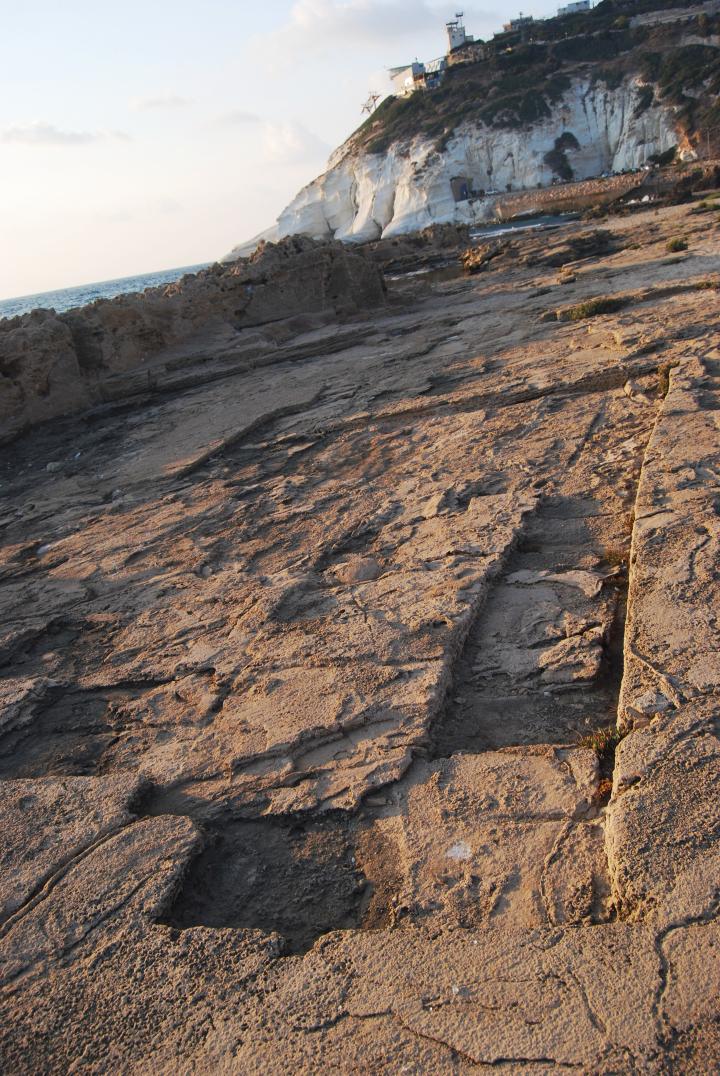 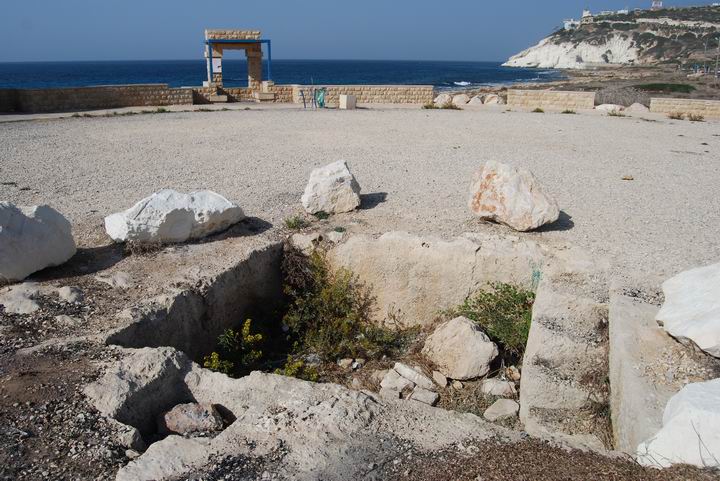 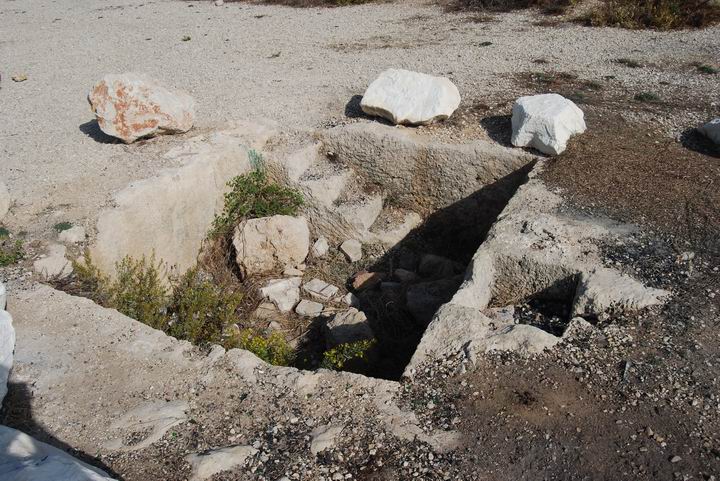 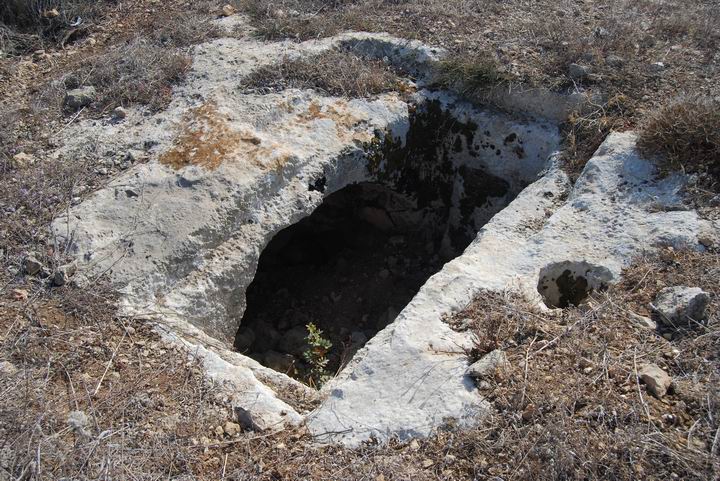 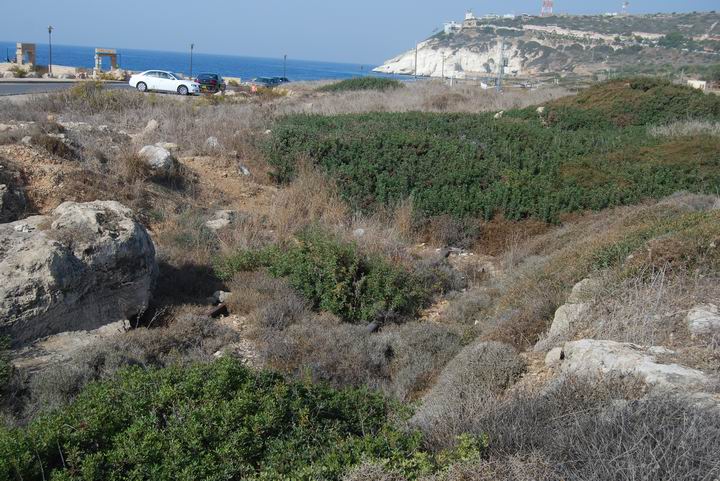 Today, a tourist “train” passes the site, carrying kids and their parents from Achziv to Rosh Hanikra. 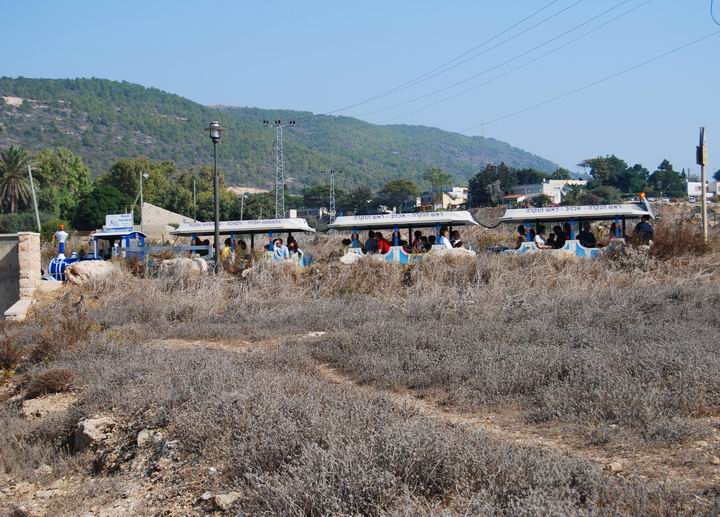 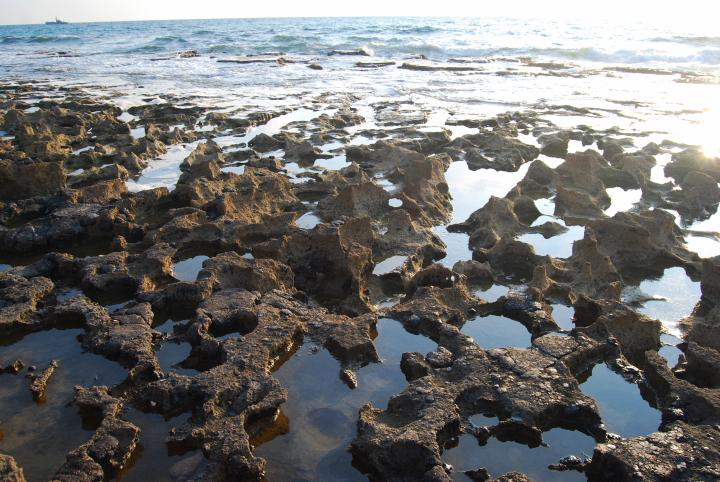 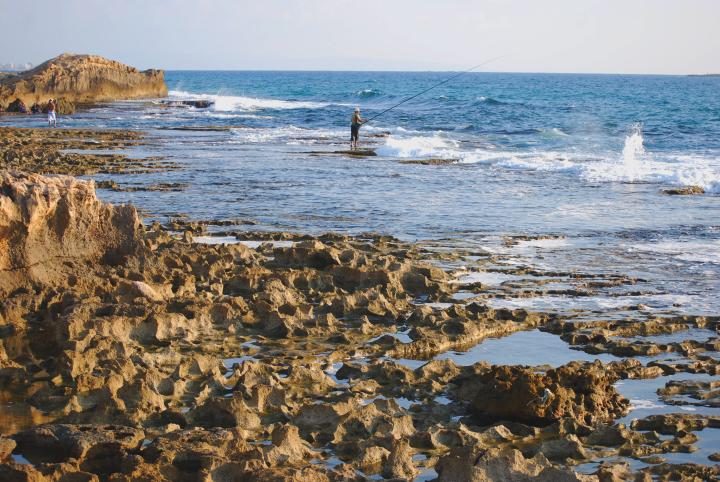 Some come here only for solitude… nature can heal your soul. 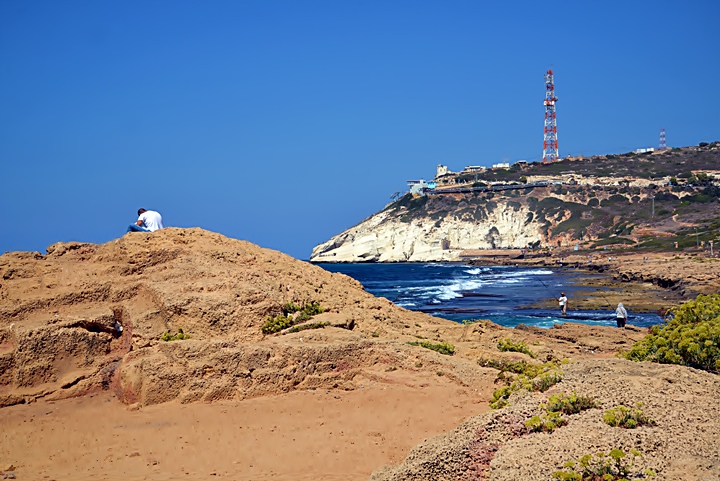 Along the beach are various types of wild flowers. One of these we noticed in late September – the Sea daffodil (Pancratium Maritimum, Hebrew: Havazelet Hahof). The flower is mentioned in the Bible (Song of Solomon, 2 : 1-2): ” I am the rose of Sharon, and the lily of the valleys. As the lily among thorns, so is my love among the daughters”. 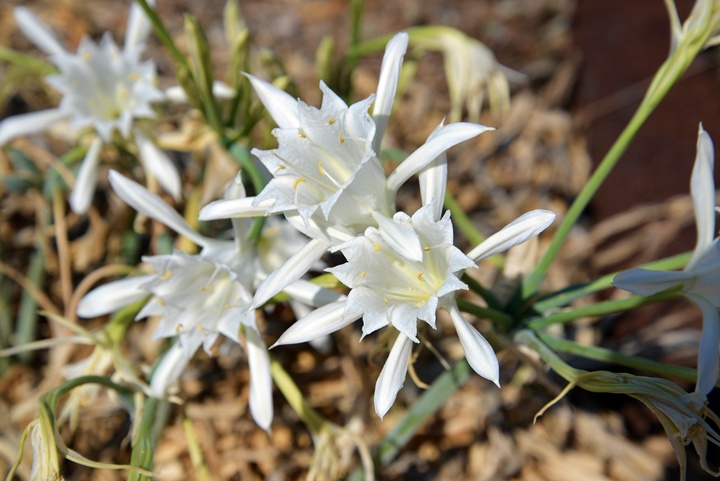 Joshua wins the battle of waters of Merom, and chases the Canaanites until ” Misrephthmaim”. According to some scholars (Vilnais), the place was Masref which preserved the ancient name. “Maim” is waters in Hebrew, and this indicates a coastal location.

“So Joshua came, and all the people of war with him, against them by the waters of Merom suddenly; and they fell upon them. And the LORD delivered them into the hand of Israel, who smote them, and chased them unto great Zidon, and unto Misrephothmaim, and unto the valley of Mizpeh eastward; and they smote them, until they left them none remaining.

“All the inhabitants of the hill country from Lebanon unto Misrephothmaim, and all the Sidonians, them will I drive out from before the children of Israel: only divide thou it by lot unto the Israelites for an inheritance, as I have commanded thee”.

This page was last updated on April 29, 2016 (wine fermentation)