This site, according to Revelation, is where the final battle  will be between the forces of good and evil. The name may originate from the Hebrew name “mountain of Megiddo”.

In Revelation 16 is a description of the end of the age, and the last battle being fought at Armageddon between the forces of good and the forces of evil. The text: (16:16): “And he gathered them together into a place called in the Hebrew tongue Armageddon“.

In Hebrew the place can be interpreted as “Har-Megiddo”, where Har is mountain or hill, and Megiddo is the ancient site of Tel Megiddo.

The hills behind the Tel (mound) are in the south, right next to the Tel. These hills can be called Har-Megeddon, the source of the name of Armageddon. The hills  actually are a lower eastern extension of Mount Carmel. This section is called Manasseh mountains, and they continue on towards the great depression of the Jordan valley. This mountain ridge presented a problem in ancient times, since the passage south had to climb up the mountains. There were only few passages, and Megiddo was one of them – a sort of gate keeper.

An aerial view of Megiddo is seen here. For more information – see Tel Megiddo. The ancient mountain pass and the hills around it are on the far right background. 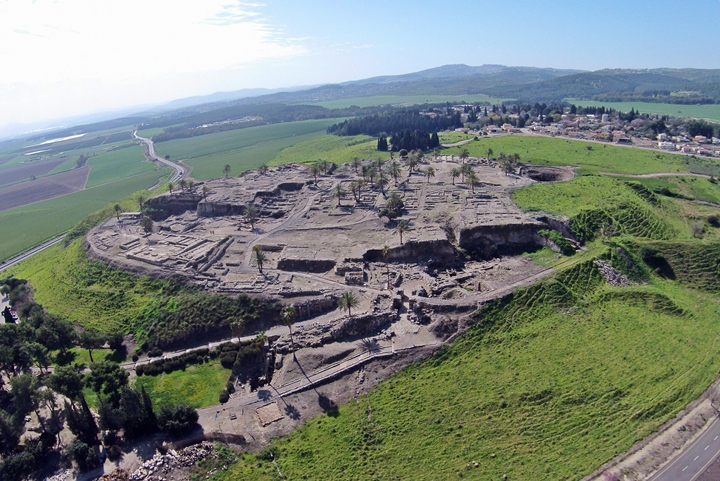 Note that the quarry in the foreground reveals a layer of volcanic rocks, sort of referring to the end of the age scene from Revelation “…and there was a great earthquake”.

Behind the quarry – Kibbutz Megiddo. 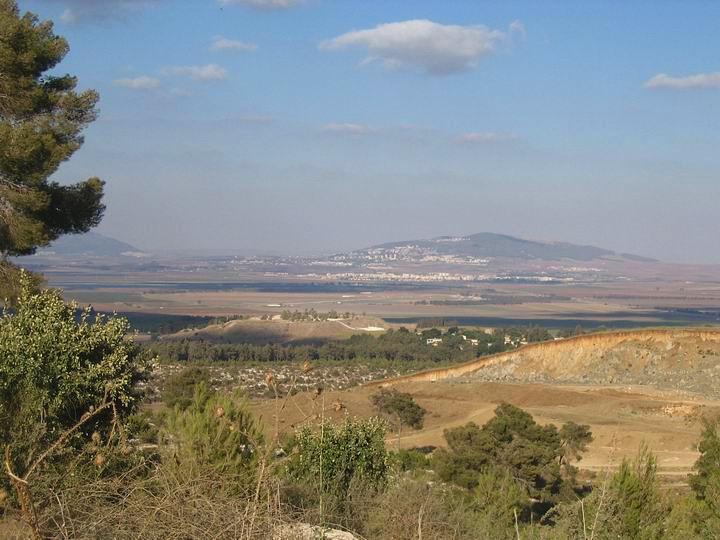 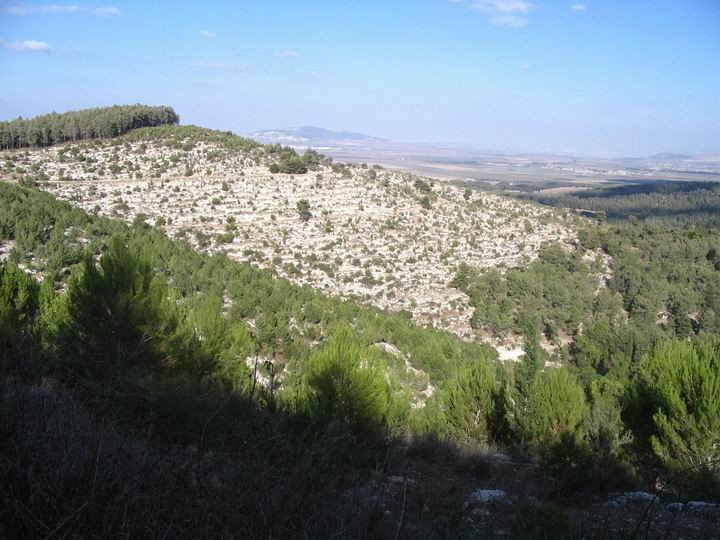 In the background – the Arab City of Um-El-Fakhem – which sits above the road. 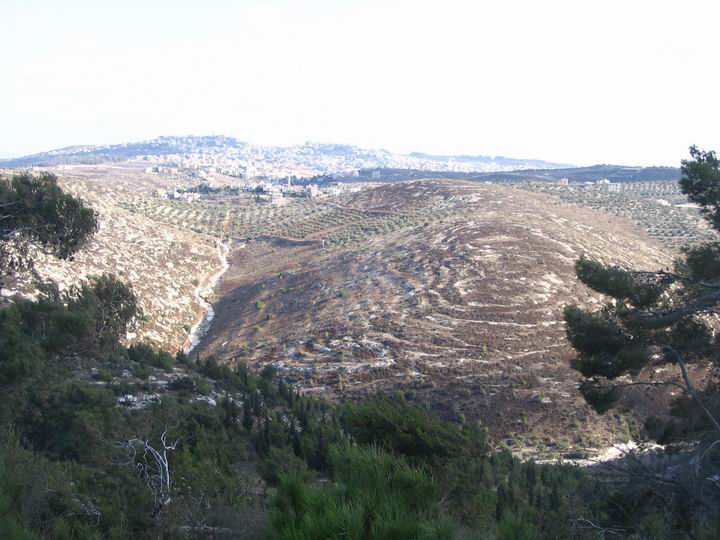 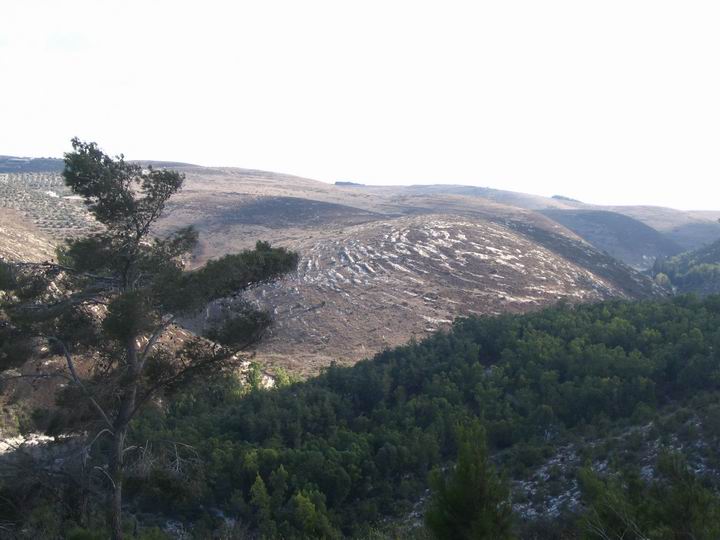 “And I heard a great voice out of the temple saying to the seven angels, Go your ways, and pour out the vials of the wrath of God upon the earth. And the first went, and poured out his vial upon the earth; and there fell a noisome and grievous sore upon the men which had the mark of the beast, and upon them which worshipped his image.

And the sixth angel poured out his vial upon the great river Euphrates; and the water thereof was dried up, that the way of the kings of the east might be prepared.  And I saw three unclean spirits like frogs come out of the mouth of the dragon, and out of the mouth of the beast, and out of the mouth of the false prophet. For they are the spirits of devils, working miracles, which go forth unto the kings of the earth and of the whole world, to gather them to the battle of that great day of God Almighty.  Behold, I come as a thief. Blessed is he that watcheth, and keepeth his garments, lest he walk naked, and they see his shame. And he gathered them together into a place called in the Hebrew tongue Armageddon. And the seventh angel poured out his vial into the air; and there came a great voice out of the temple of heaven, from the throne, saying, It is done. And there were voices, and thunders, and lightnings; and there was a great earthquake, such as was not since men were upon the earth, so mighty an earthquake, and so great. And the great city was divided into three parts, and the cities of the nations fell: and great Babylon came in remembrance before God, to give unto her the cup of the wine of the fierceness of his wrath.  And every island fled away, and the mountains were not found.  And there fell upon men a great hail out of heaven, every stone about the weight of a talent: and men blasphemed God because of the plague of the hail; for the plague thereof was exceeding great”.

“And I saw heaven opened, and behold a white horse; and he that sat upon him was called Faithful and True, and in righteousness he doth judge and make war.  His eyes were as a flame of fire, and on his head were many crowns; and he had a name written, that no man knew, but he himself. And he was clothed with a vesture dipped in blood: and his name is called The Word of God. And the armies which were in heaven followed him upon white horses, clothed in fine linen, white and clean. And out of his mouth goeth a sharp sword, that with it he should smite the nations: and he shall rule them with a rod of iron: and he treadeth the winepress of the fierceness and wrath of Almighty God. And he hath on his vesture and on his thigh a name written, KING OF KINGS, AND LORD OF LORDS.

And I saw an angel standing in the sun; and he cried with a loud voice, saying to all the fowls that fly in the midst of heaven, Come and gather yourselves together unto the supper of the great God; That ye may eat the flesh of kings, and the flesh of captains, and the flesh of mighty men, and the flesh of horses, and of them that sit on them, and the flesh of all men, both free and bond, both small and great. And I saw the beast, and the kings of the earth, and their armies, gathered together to make war against him that sat on the horse, and against his army. And the beast was taken, and with him the false prophet that wrought miracles before him, with which he deceived them that had received the mark of the beast, and them that worshipped his image. These both were cast alive into a lake of fire burning with brimstone. And the remnant were slain with the sword of him that sat upon the horse, which sword proceeded out of his mouth: and all the fowls were filled with their flesh”. 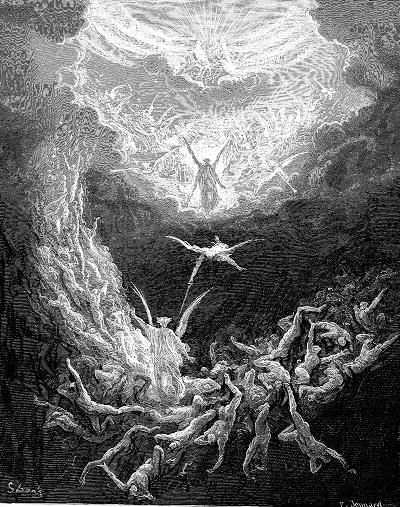