Search for the lost  cities

Recent emergency excavations along Jehoshaphat street in Acre revealed parts of the Roman and Byzantine city, east of the old city. Are we starting to reveal the lost cities?

The structures inside and around the old city of Acre date to the Ottoman and Crusaders periods, but the impressive city from the Hellenistic period through the Roman/Byzantine times seem to have vanished. Although it was one of the major cities on antiquities, almost no structures survived and show its glory.  Where did these cities disappear?…

Recent emergency excavations in 2009 along Jehoshaphat Street, east of the old city, have unearthed remains from the Roman and Byzantine city, in addition to findings from the Crusaders period. This was the first time  that significant remains from the Roman/Byzantine period were excavated here in Acre, which is primarily dominated by Crusaders and Ottoman period remains.

The following aerial view shows the location of the excavation, on the east side of the old city. 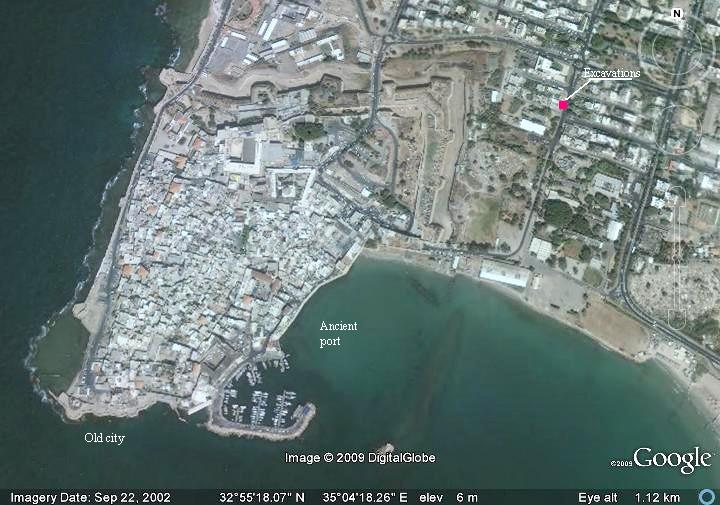 In search of the Hellenistic/Roman/Byzantine city:

During the 2nd century BC the Hellenistic city was relocated from Tell Akko to the area east of the current old city, and established as a military colony in about 261 BC (based on Numismatic data). It became one of the largest cities in the Mediterranean during the Hellenistic period, for 130-150 years. According to ceramic studies across Acre, the Hellenistic city extended over an area greater than 1,000 Dunam (4 times the size of the old city): it stretched all the way  from the ancient Biblical site on the east – to the west coast north of the current old city.

A sketch of the ceramic findings and the estimated size of the Hellenistic city at the end of the 2nd century BC is shown in the following diagram (based on a survey of IAA’s Eliezer Stern; the positions of each finding were approximated). 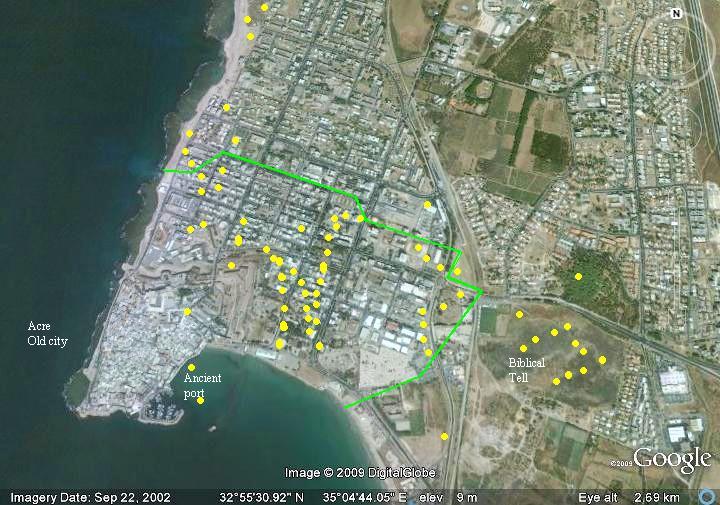 The Roman and Byzantine city flourished in this new location, thanks to its port and location at the crossroads of major ancient highways. It was one of the major Roman cities in the Galilee, with the largest marine port in the Holy Land (until Caesarea was built in 22BC).

The city was upgraded to the status of Roman Colony and was renamed “Colonia Ptolemais”, and its residents became Roman citizens; the city’s new status was minted on Nero’s coin on 53 AD. Acre/Ptolemais was also the major base of the Roman army, and the first station of the Roman Legions that crushed the Jewish revolt.

Although its impressive past, few remains were left from the Roman/Byzantine period.  Today the area between the old city and the Tell is a residential and industrial area, which limits the ability to conduct comprehensive excavations. The few excavation licenses are granted  – only after a new structure is constructed and hits an ancient structure.

During 2009 renovations along Jehoshaphat street were conducted in order to modernize the drainage on the street. After these civil works detected ancient remains, emergency excavations were arranged. The excavators, headed by Nurit Feig of the IAA, opened four excavations squares along the road.

From the IAA report we can see the intermediate results:

“The walls of buildings and pottery vessels from the Roman, Byzantine and Crusader periods are being exposed. A large water reservoir that dates to the Crusader period was excavated to a depth of c. 3 meters. The excavation of the installation was halted due to safety considerations. For the first time we are excavating remains of the city from the Byzantine period in which there is an enormous amount of pottery sherds. The ceramic artifacts that have been recovered from the Crusader period are also extremely impressive”.

The four excavations squares were cut into the west side of the street, as seen below. 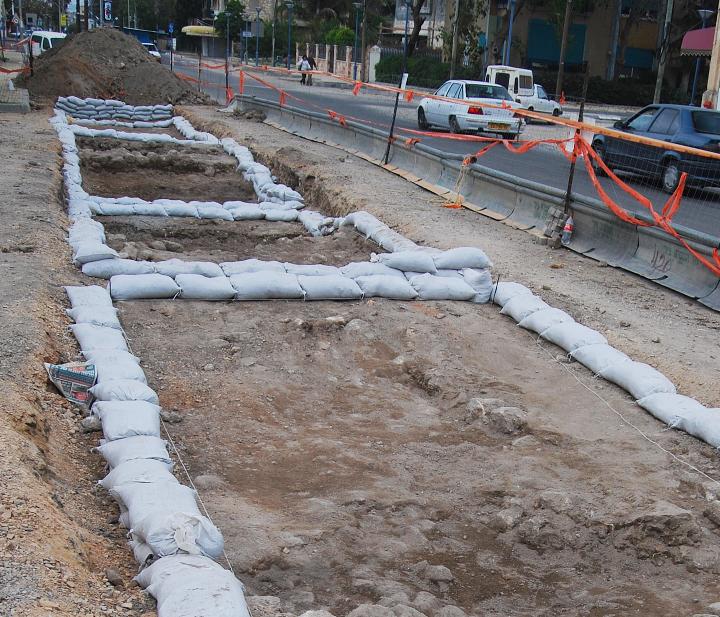 Another view of the squares along the front of the marine training center. 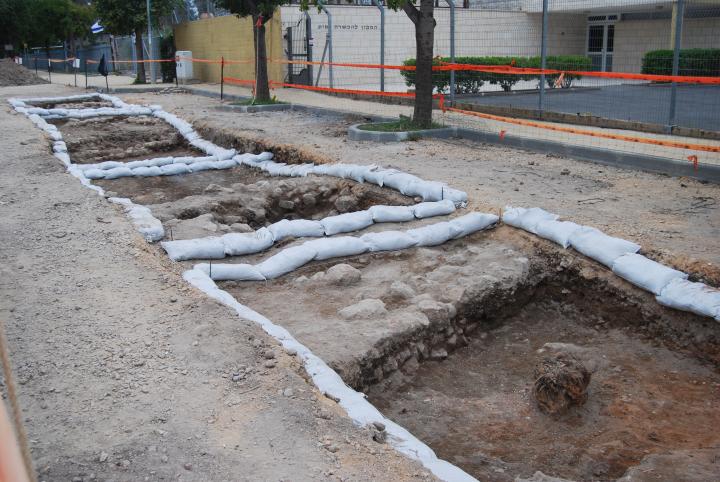 A section of a wall is visible in one of these squares. 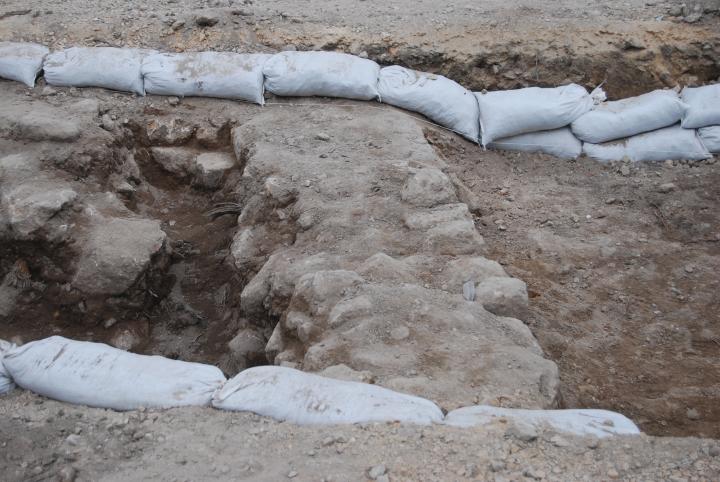 Another excavation square is seen below. 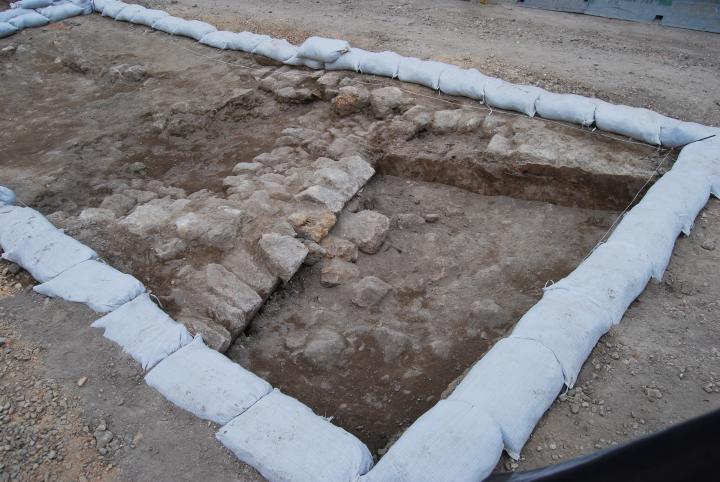