Ruins of fortress situated on a high hill in the center of Ramot-Alon neighborhood, dated to the second temple period.

Khirbet Tililiya is the site of the ruins of an ancient fortress situated on a high hill in the center of Ramot Alon neighborhood, which overlooks the western entrance to Jerusalem. It is dated to the second temple period (Hasmonean and Herodian).

Kh. Tililiya is a small site (4.5 Dunams), located on top of a hill which is surrounded by the modern houses  of Ramot-Alon (Ramot), on the west side of the Jerusalem (west of Har Hozvim). The street on the north side is called Yosef-Tsvi Herts, while the street on the south side (with the easiest access) is called Yosef Shekhtman. 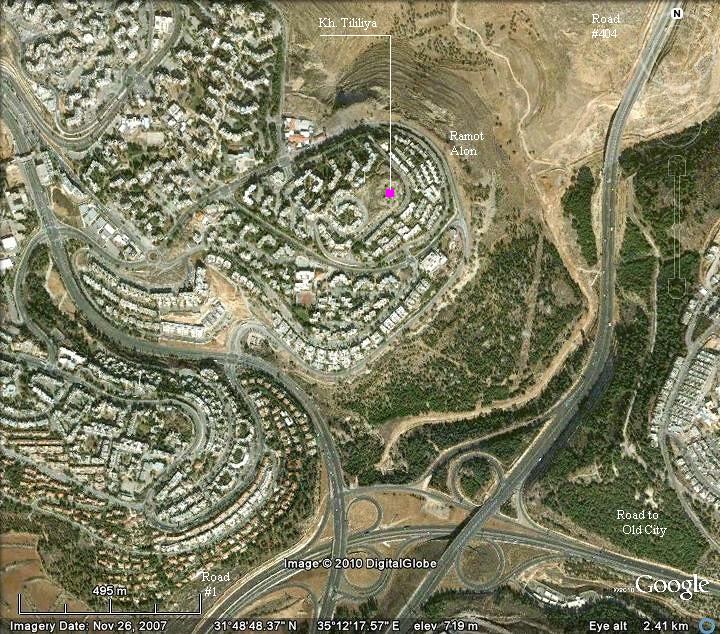 According to the style of construction, the fortress is dated to the second temple period. It was used as a fortress and observation site, and perhaps for a fire signaling station.  The survey dated the findings on the site to Israelite period (Iron Age II, 10th to 6th century BC), Hasmonean period (2nd to 1st C BC), Herodian (1st century BC), and Byzantine (4th-6th century AD).

The site was examined in the PEF survey (1866-1877) by Wilson, Conder and Kitchener. It appears in the center of the section of this map of 1878, south of the large red circle (the Arab village of Beit Haninna).  They named the site as Tellilia (on the map) and Telilia (in the report).

The fortress is situated above a valley which was a major junction of ancient roads (appears as dashed lines to the right of the site), connecting the plains to Jerusalem (which is located on the bottom right side). 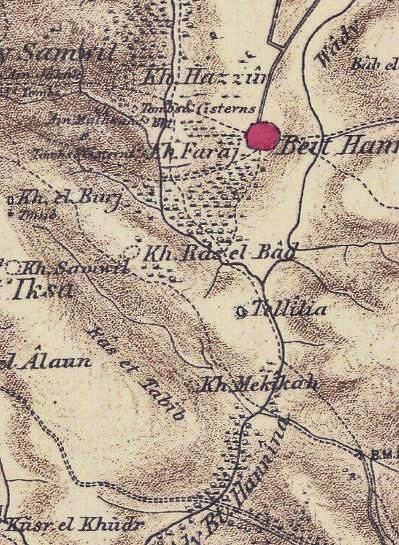 The strategic location of the hill continued to make it an ideal location for an observation post: A Jordanian military observation post was located on top of the hill prior to the six-day-war (1967).   After then Israel regained control of the west bank including this site.

Shortly after the war, starting in 1974, a new neighborhood was constructed in this area and called “Ramot Alon” – or “Ramot” for short. Its new houses and streets were constructed around the site.

The site is easily accessed from the streets surrounding the hill in Ramot-Alon neighborhood. Although the site  was damaged by the construction around it, the inner side of the fortress is still intact and hopefully will be reconstructed one day. Note that there is a municipality plan to convert it to an open archaeological park.

If you live in this area or just passing by, you should stop by and admire the panoramic views.

The PEF survey published a plan of the site, and added the following account of the visit of 1881:

“This appears to be an old camp on a commanding spur between two roads. The walls are 4 feet thick, of stones without mortar, and averaging; about 2 feet diameter. The enclosure measures 65 yards [60m] north and south by 35 yards [32m] east and west. It has inner enclosures as shown. The only water-supply is from a cistern some distance to the east, now dry”. 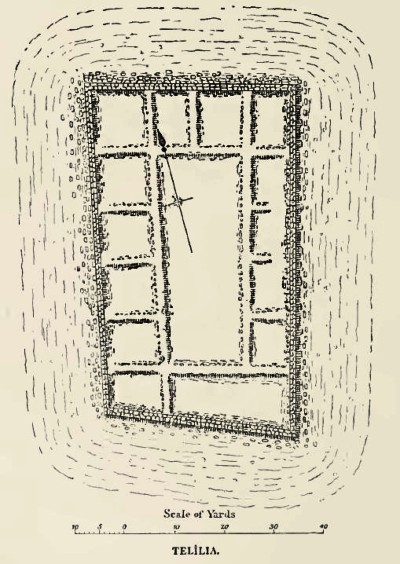 The rectangular fortress has two sets of walls – external and inner, with rooms between the walls. The fortress includes a tower (size: 7m x 21m) on the south-east side,  and a hall (size: 7m * 9m) on the south-western side.

A close view of the site from the north-west side is seen in the photograph.  The fortress is located high above the surrounding area, and can be easily reached from the west side. 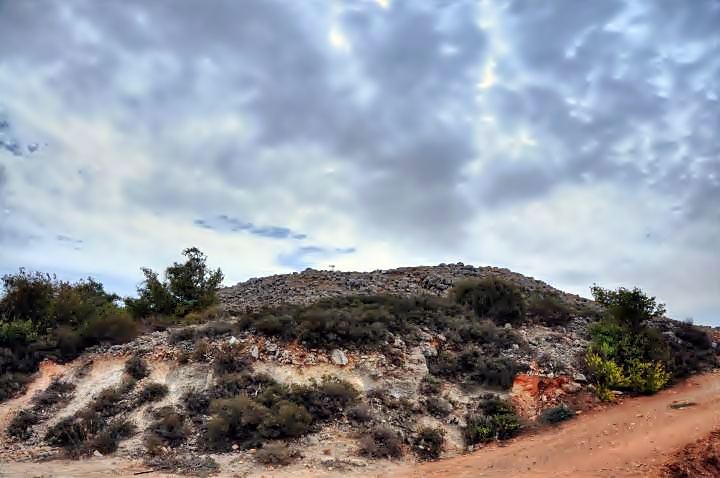 The top of the mound is covered by small un-hewn stones. The photograph shows the north-west corner looking to the south, with a south view in the direction of the entrance to the city (bridge of strings).

At first glance, it is difficult to see a pattern of the ancient fortress. However, with some imagination you can see two sets of walls – the external wall on the right, and the inner wall 7m away. 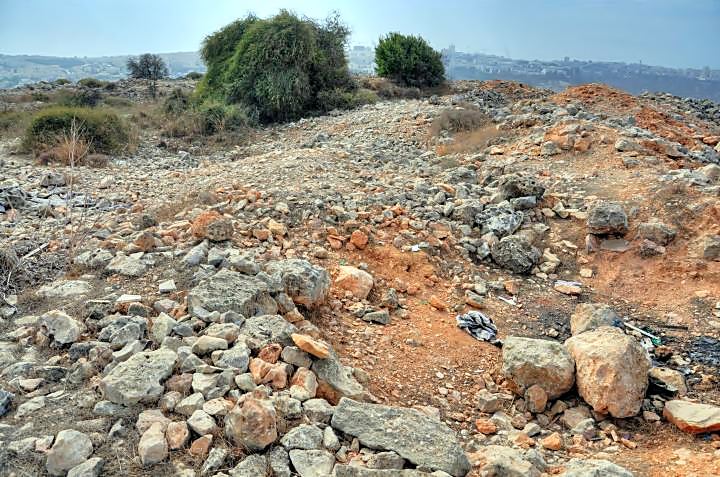 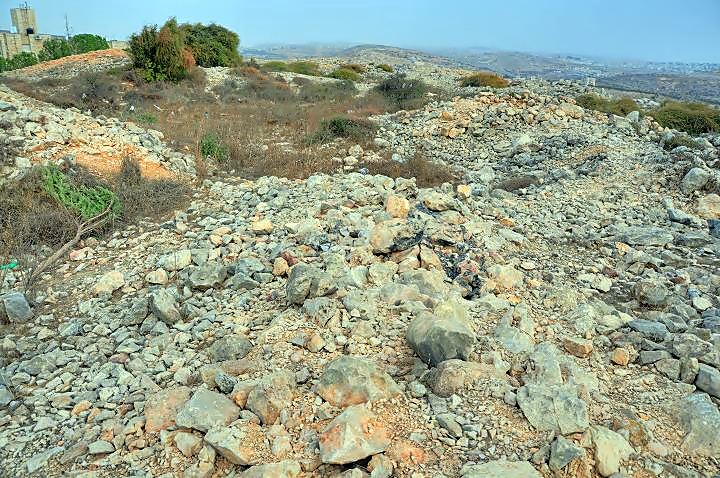 After moving along the edges of the site, you can notice the traces of the walls that surrounded the fortress. The view below is towards the north-east side.  The external wall is 4feet wide (1.2m), composed of small un-hewn stones averaging 2 feet (0.5m) in diameter, and without mortar holding the stones. 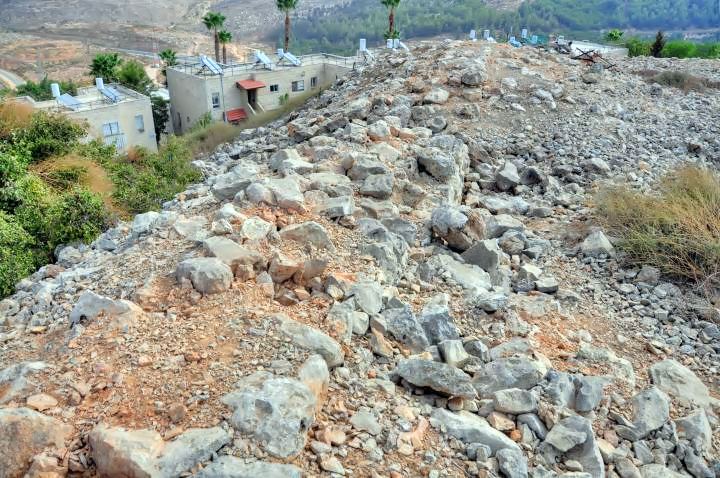 The north-east corner of the site is shown in the next photograph. A modern plastic chair is lying in the bottom of a hole in the wall, probably was a military trench used by the Jordanian soldiers prior to the six-day-war (1967). 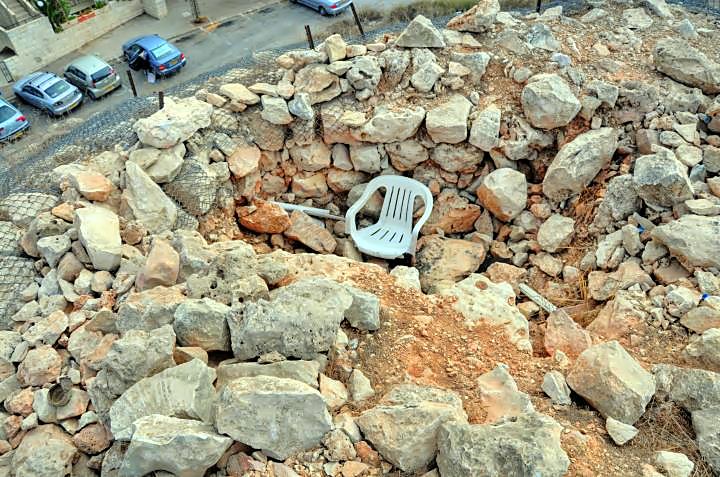 The next picture shows a section in north-eastern external wall. 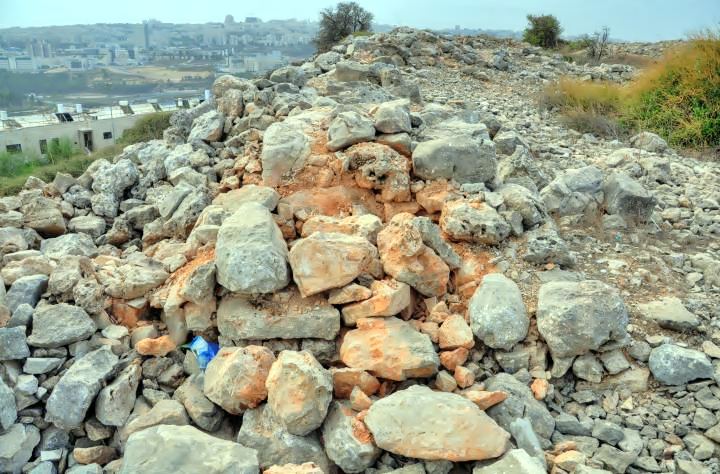 The center of the eastern wall is seen in the following photograph. This may have been the gate to the fortress and a tower that protected the gate. 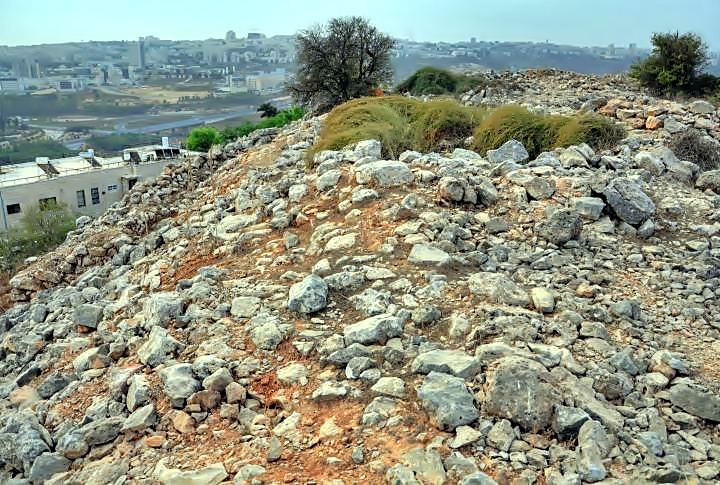 The next photograph shows the ruins of the tower on the south-eastern side. 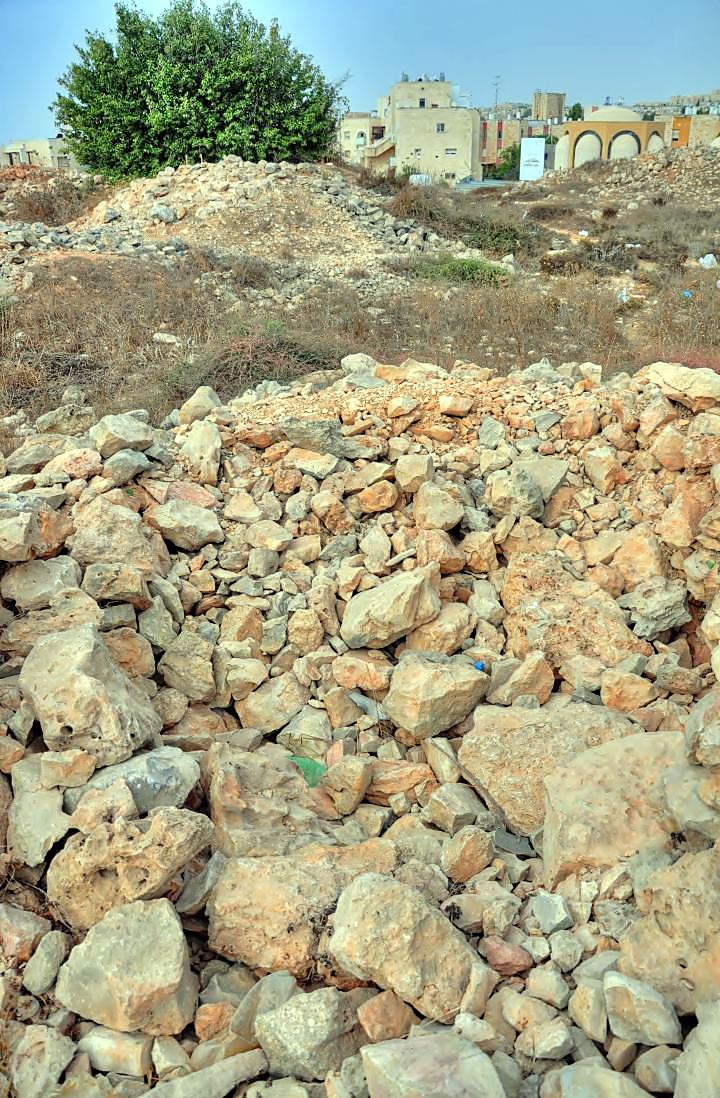 Another section of the south eastern tower: 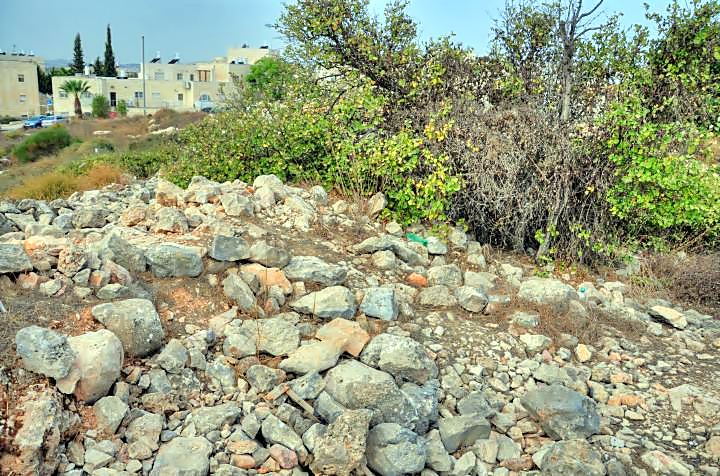 Looking back towards the north side: 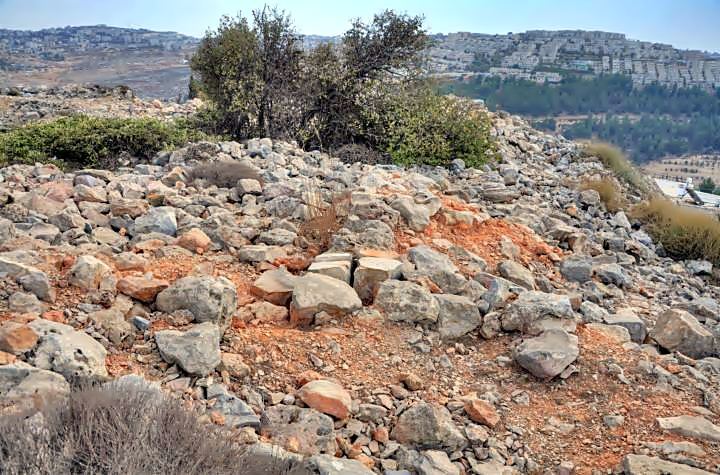 A section of the wall on the south-west corner is seen on the left side.  This was once a hall (7m x 9m).

In the center is a pile of stones that seem to have been constructed in recent years. 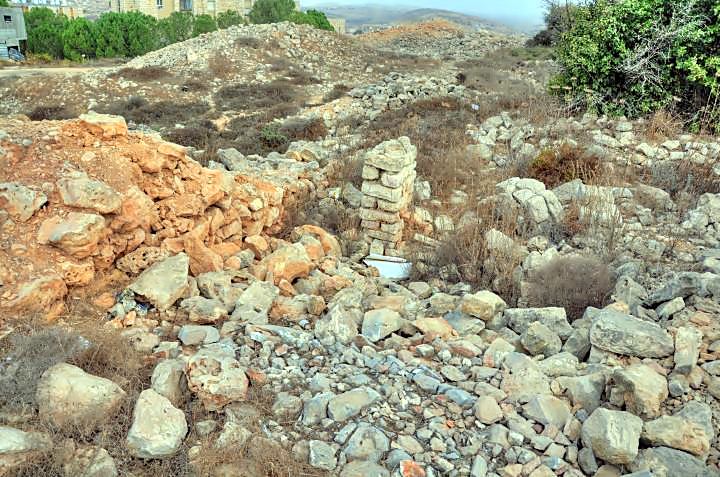 Another view of the south-west corner, looking towards the south: 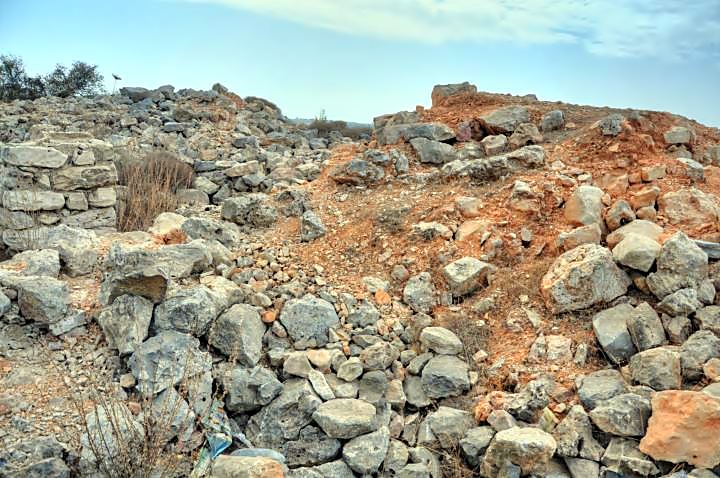 The west side of the hill is the easiest way to climb up to the site. However, it is also littered by construction debris. 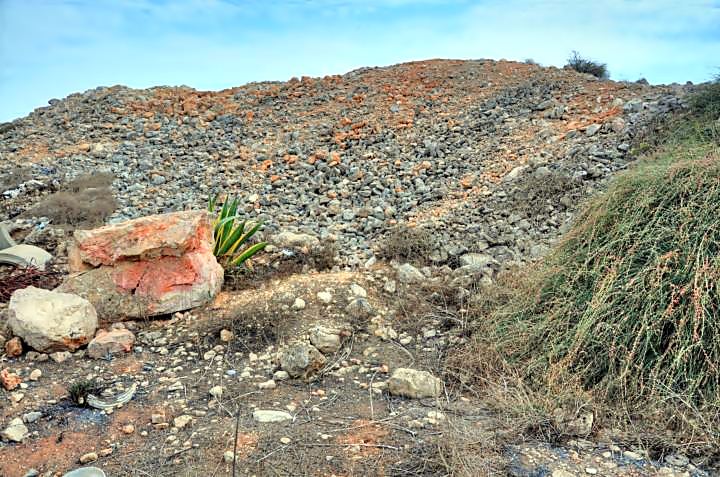 A view of the north-west corner of the site is seen in the next picture. 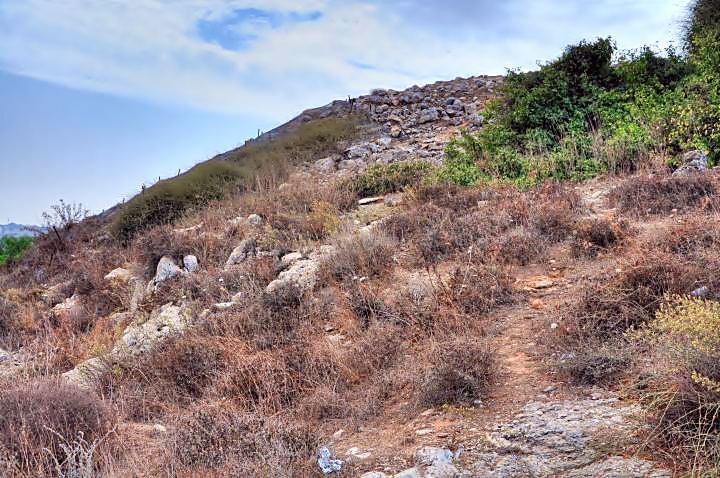 On the north-west slope of the hill are remains of a cistern. 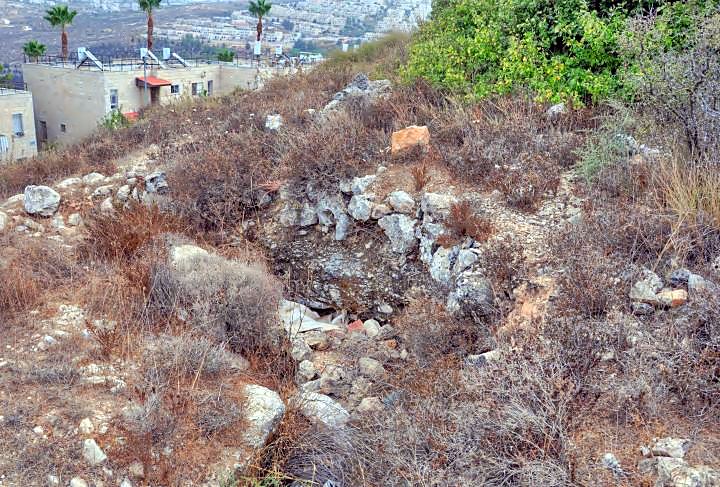