A map of a section of the Sanhedria neighborhood is here, indicating the major points of interest. 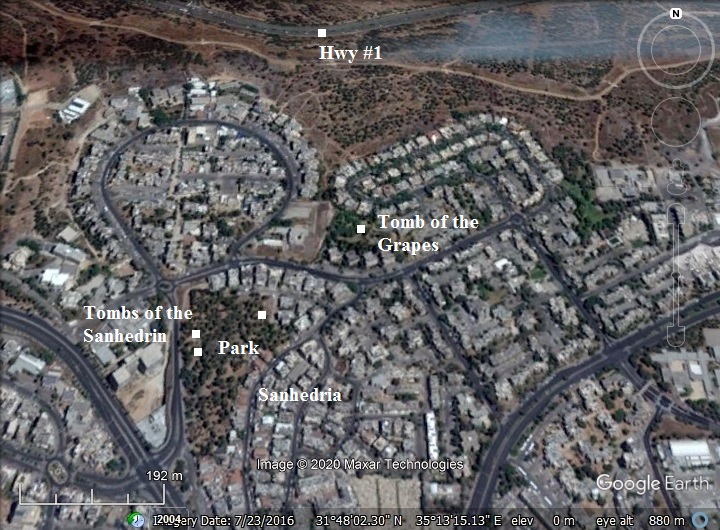 During the second Temple period, the area of Jerusalem greatly expanded. Burial sites, located in the first Temple period closer to the nucleus of the city, were relocated farther away in order to preserve the Jewish laws of purity. Most of the elaborate rock-cut tombs are found in the head of the Upper Kidron valley, also known as the valley Josophat (Jehoshophat). This area is roughly 5KM north of the old city.  In this vast necropolis about 1,000 burial caves were found, covering an area of 10 dunams (1 hectare). The rock cut tombs were mostly commissioned by wealthy Jewish families during the second temple period. The tombs were mostly constructed in the 1st century AD.

Thirty-two burial complexes were documented in the necropolis, some of them covered or removed by modern buildings.   On the north side of the necropolis are the more elaborate burial complexes, while the simple tombs were found on the southern side. This was one of the largest cemeteries of  the second temple period. The necropolis was constructed from the period of Herod the Great (2nd half, 1st century BC) up to the destruction of Jerusalem (70 AD). After then, the area became a stone quarry.

During the Byzantine period, as well as in the Middle ages, the caves were partially reused.

“The well known ” Tomb of the Judges ” is called by the Jews ” Tomb of the Seventy,” who appear to have been members of the Great Sanhedrin. The tomb is generally supposed to belong to the Hasmonean period, which would perhaps allow of its having been the sepulchre of members of the Sanhedrin. The Judges mentioned in the Bible were buried each in the territory of his own tribe. The tradition connecting this tomb with the Sanhedrin, is mentioned as early as 1537 a.d.”. 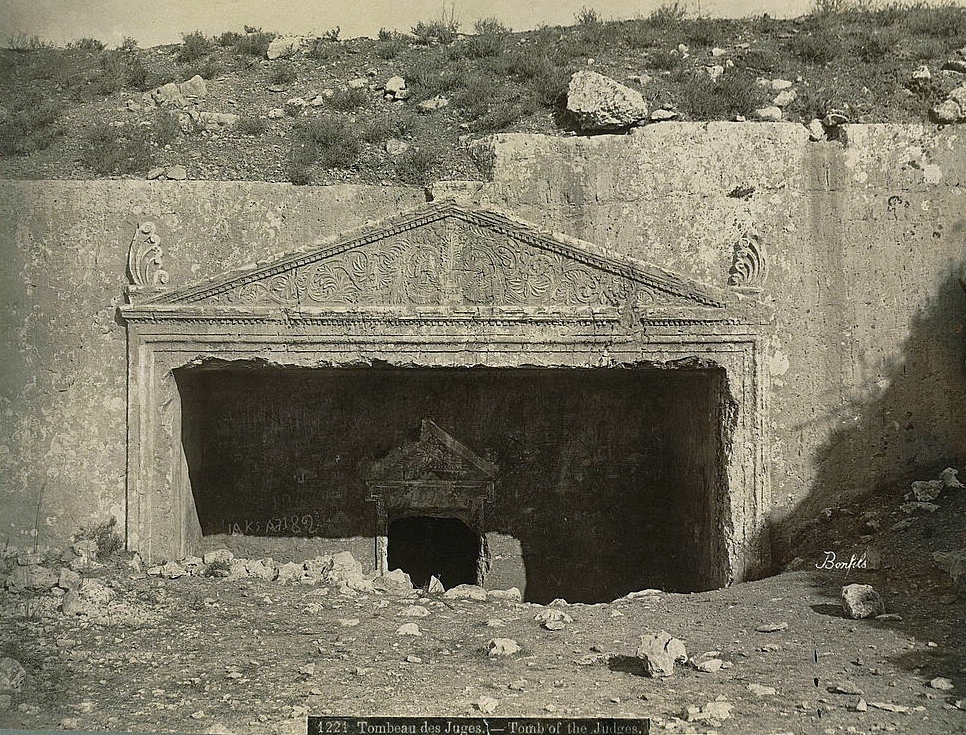 Several of the burial complexes were incorporated in public parks in the Sanhedria neighborhood. This Orthodox Haredi neighborhood of Jerusalem is named after the “tombs of the Sanhedrin”. The exterior of the caves are open to the public, but access inside the caves is prohibited.

A municipal park, named “Tombs of the Sanhedrin Park”, was laid out in the 1950s around a portion of the caves. 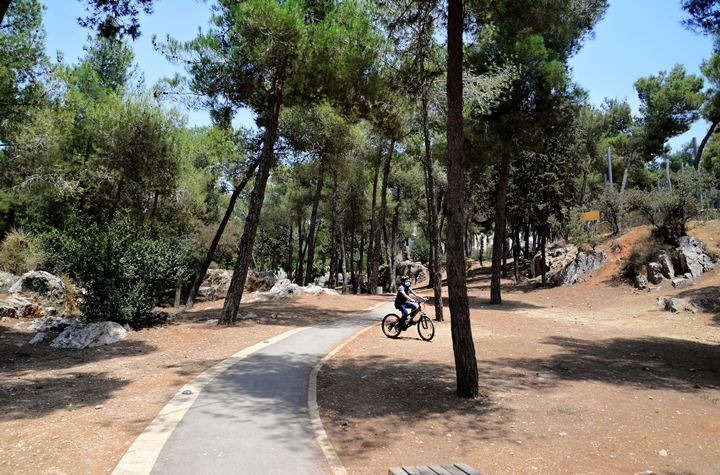 The underground caves are hewn in the rock. Several of the exposed caves can be seen in the park. Below is a description of three of the burial complexes.

The central and famous cave, commonly known as the “Tombs of the Sanhedrin” or the “Tombs of the Judges”,  is located on the north west side of the park. It probably belonged to a wealthy and rich family during the end of the second temple period, although there are no inscriptions or records that could identify the family. 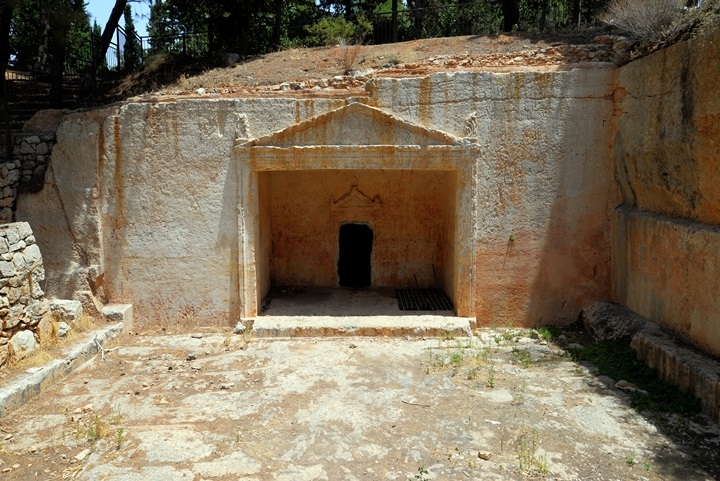 The following photos and plan of this burial complex.

Before the entrance of the cave is an open courtyard (forecourt), which was cut into the rock.

Several rock-hewn benches are located on its side. 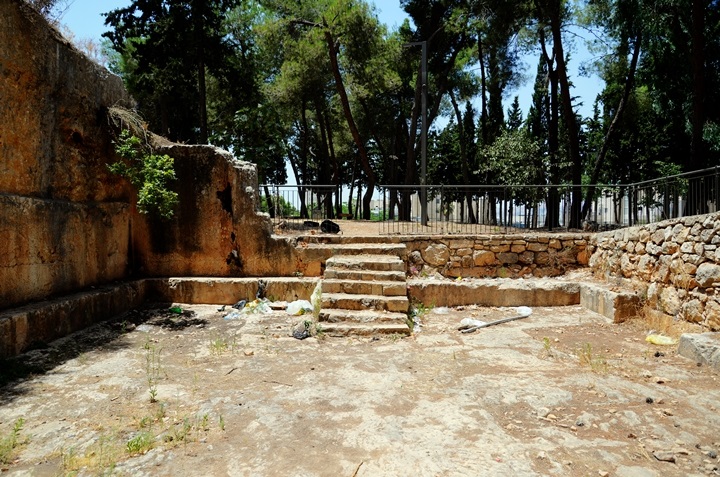 After a step is an open room with walls on all three sides. At its end is an entrance to the central burial chamber. 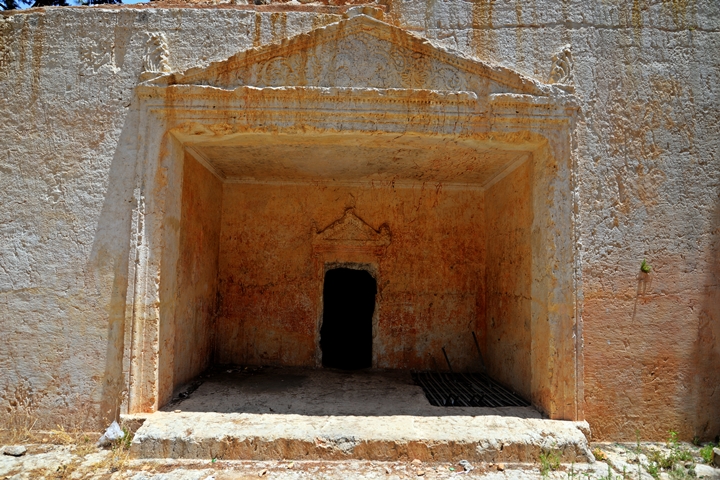 In the photo below is closer view of the gable, carved above the entrance to the burial complex. It is decorated with flowers and leaves. 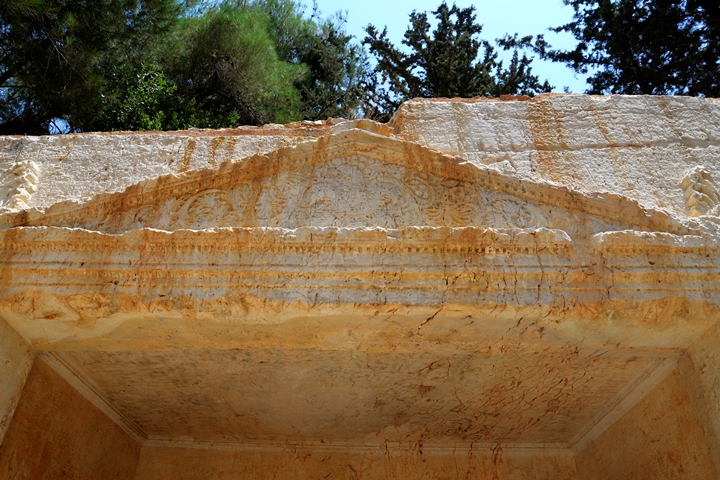 Inside the entrance chamber is a narrow opening to the main chamber. Its gable is also decorated  with a flower and leaves. The side jambs are slightly damaged. A metal screen was installed to prevent unauthorized entry into the burial complex, so one can only peek inside to see the interior.

Farther inside the burial cave are seven chambers, located on several levels, containing a total of 63 burial niches. 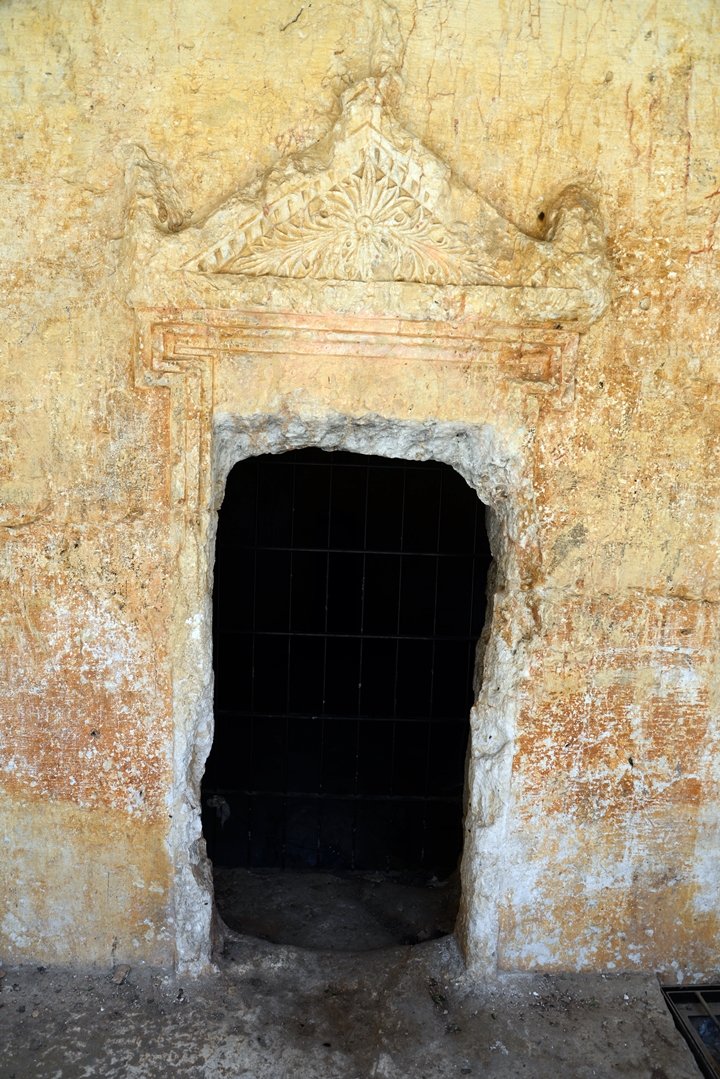 Just beyond the entrance, on the left side, is the largest burial chamber (chamber #2 on the plan). Here are 13 burial niches arranged in two levels and in pairs. Each niche measures 20″ (50cm) by 24″ (60cm).

In some of the burial niches the bodies were simply placed on the rock and let to decomposed, then collected into stone chests (ossuaries) which were placed in vaults inside the complex.

Inside some other of the burial niches used to be sarcophagi. A sarcophagus (sarcophagi in plural) – in Greek – means “flesh eater”. It is a stone coffin, intended to be a multiple use box that contained the body of the deceased for the first phase. After the flesh decomposed the bones were removed to a smaller container or pit, allowing the next member in the family to be placed in the coffin. 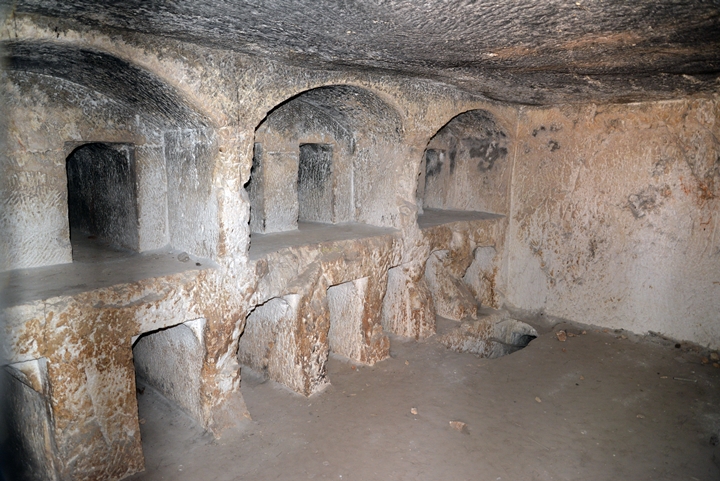 The central burial chamber has another entrance that continues to a deeper chamber (#3 on the plan) with 9 burial niches. One of these niches can be seen behind the narrow entrance. 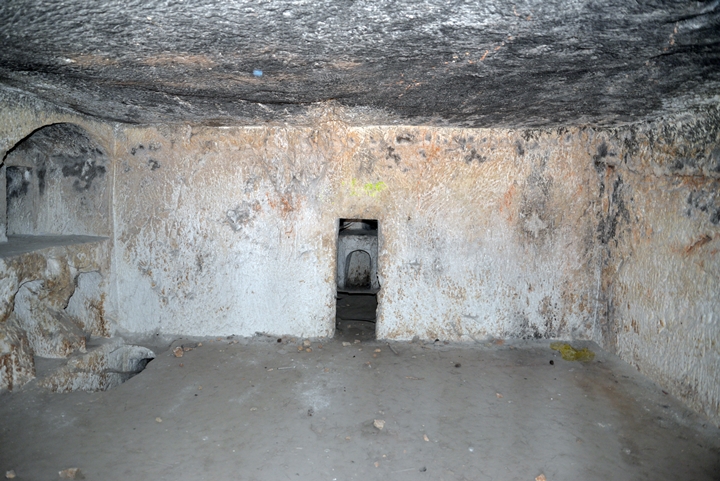 The right side of the central chamber has yet another opening to the right. It opens to chamber #4, also with 9 niches. 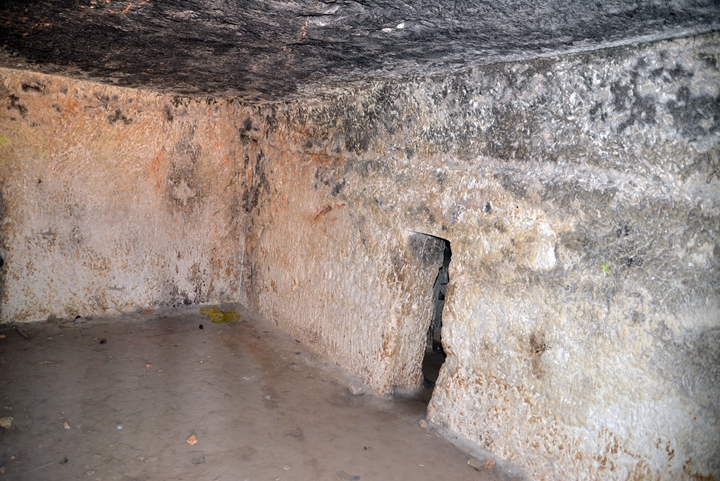 There is a stepped entrance, cut into the floor of the main chamber, that continues to a second level, where chamber #4a is with a total 12 niches.

A forth and fifth chamber on a third level (#6 and #7 in the plan) are independent with their own entryway.

The plan of the cave was mapped by Rahamani, appearing in ‘Atiquot 1961 (Volume 3): 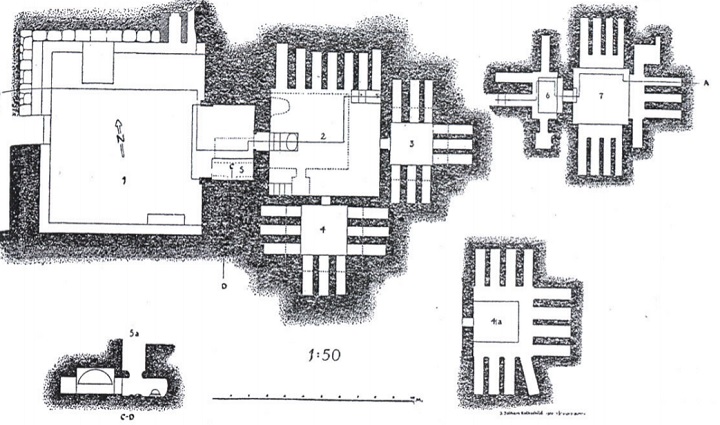 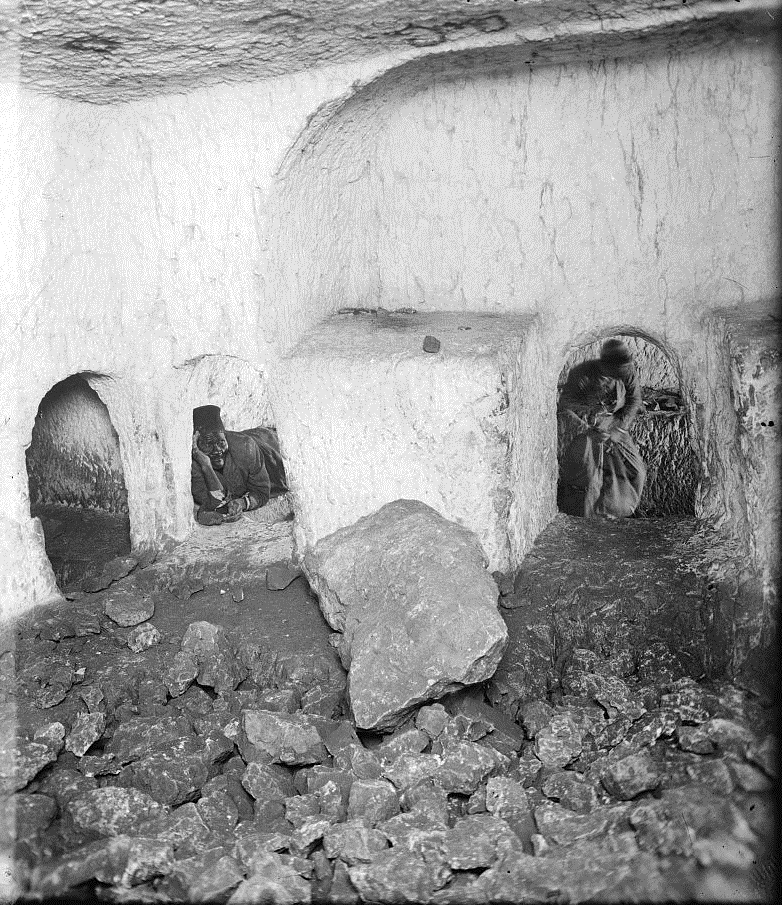 A smaller complex is located nearby. 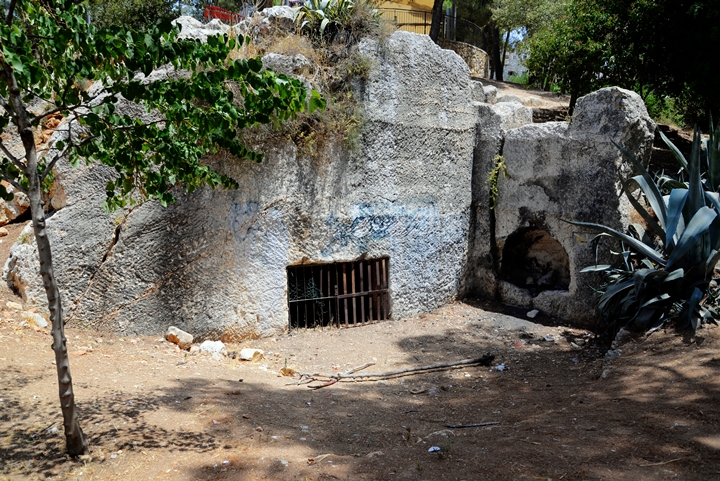 A view from the top of the cave: 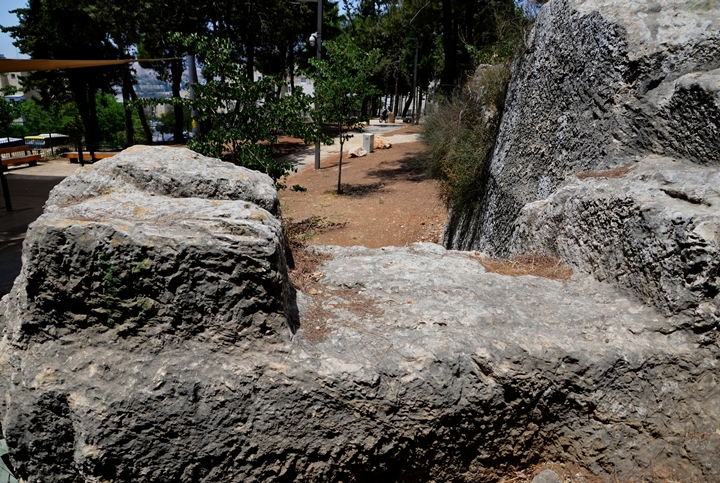 Another burial complex is located on the north east side of the park.

A view of the complex from the north side: 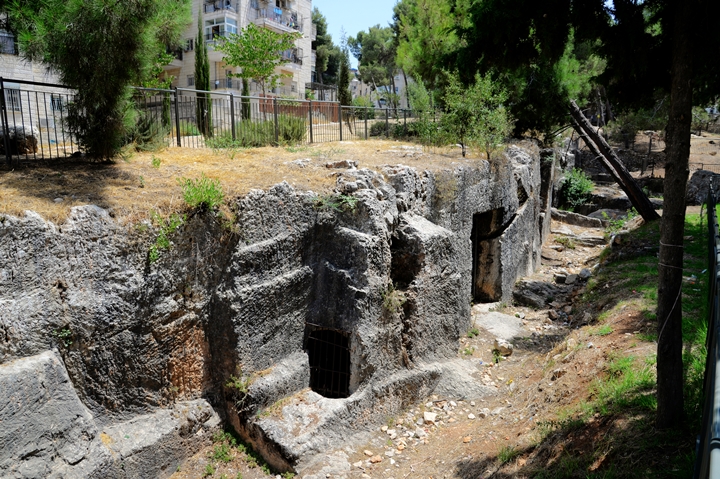 The entrance to the southern most cave is in the following photo: 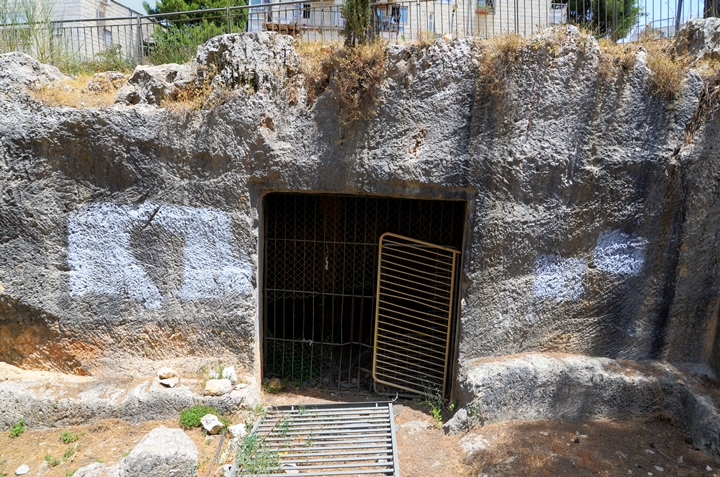 A room leads to a narrow opening. Behind it are burial niches.

Shamelessly, there is a pile of garbage inside the forecourt, and graffiti is painted on the walls. The municipality should periodically clean it up. 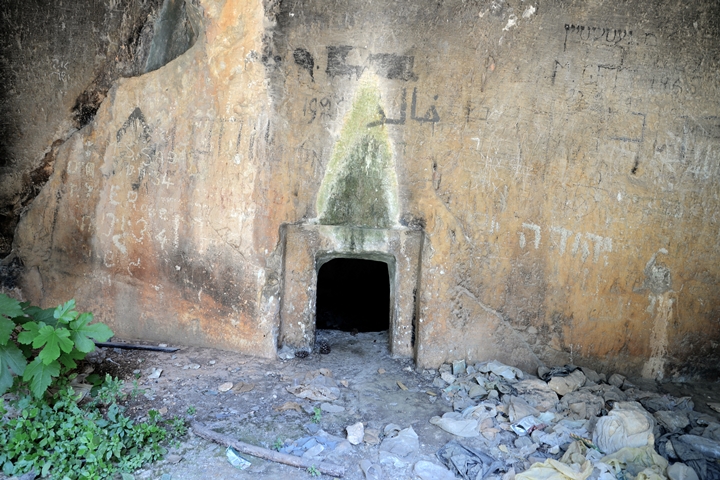 The following photo shows the opening of the burial cave in the middle of this complex: 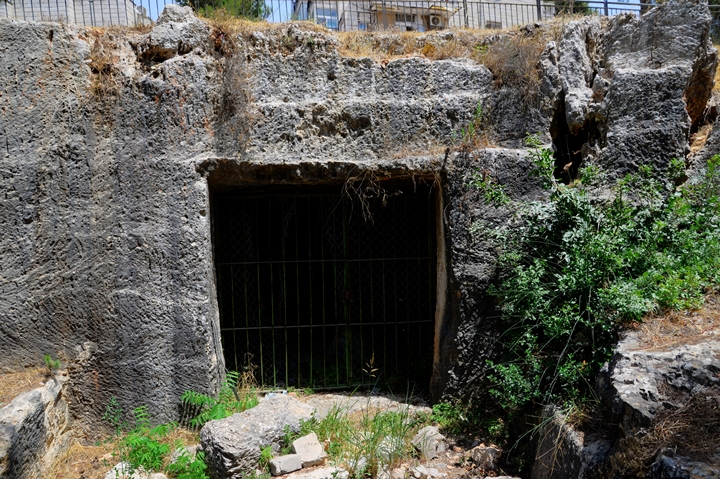 The interior of the burial cave: 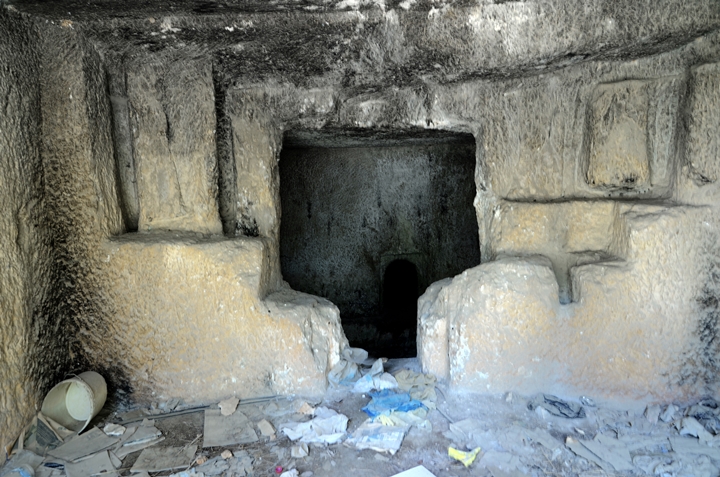 (b) Tomb of the grapes

Another magnificent burial complex is commonly named the “Tomb of the grapes”. It is located in the Meshulam park, not far from the tombs of the Sanhedrin. Access to the park is on Yam Suf street.

“The tomb is one of the series that forms a great necropolis lining the valleys north of Jerusalem. It stands a little north
of east from the absurdly named ” Tombs of the Judges ” ; according to Dr. Schick, about 1,500 feet from that well-known
excavation. It shares with the ” Tombs of the Judges ” many characteristics in common which distinguish both from the
other rock-tombs in the neighbourhood. In the great majority the rock-cutting is left without ornament to relieve its severity.
In one known to me there is a slight molding round the entrance ; in another an elaborate distyle portico has been cut
out of the rock which even in its present ruined condition retains indications of good workmanship ; but no other displays
so elaborate a pediment and so much internal decoration as the tomb under discussion and its more familiar neighbour”. 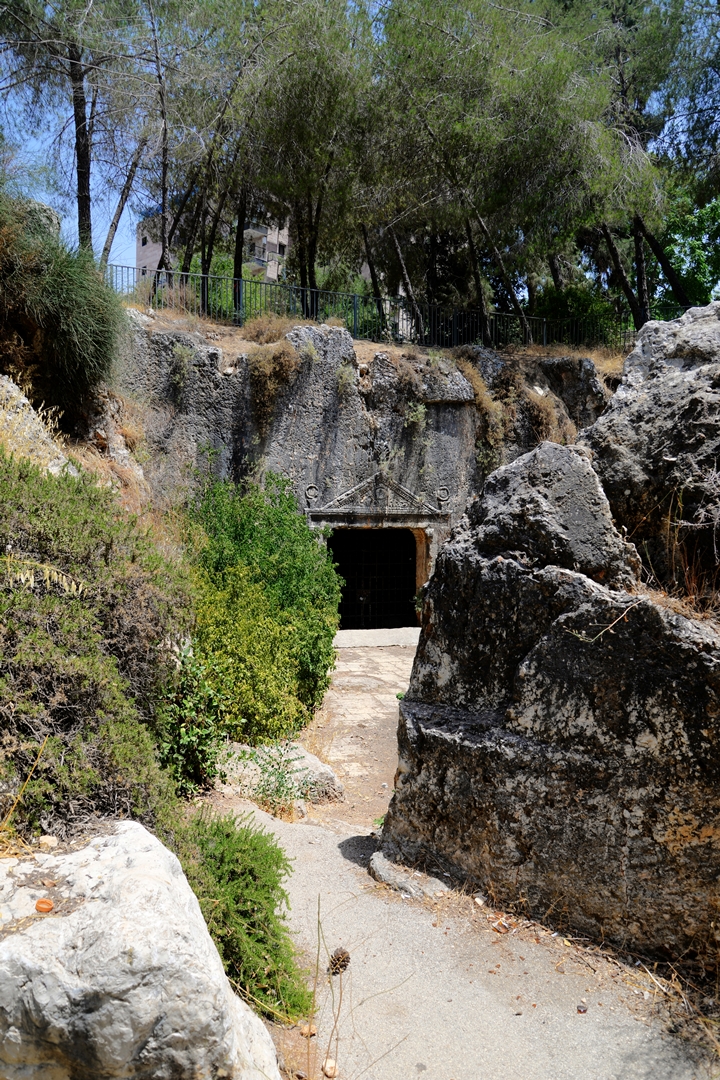 “The entrance to the present tomb has been recessed about 20 feet horizontally behind the original surface of the
rock, and a court about 22 feet across has thus been formed. Whether this area was ever vaulted over with masonry—as
was undoubtedly the case at the ” Tombs of the Judges ” cannot be determined. There are a large number of stones
lying about, but if they ever formed part of a building it has become completely disintegrated”. 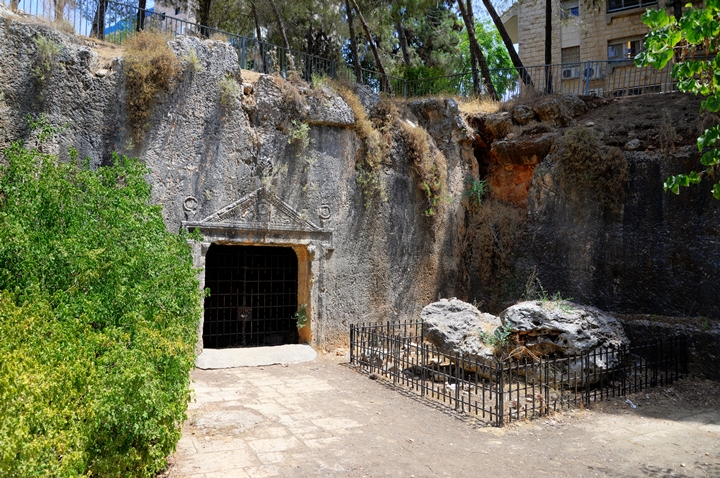 “The doorway is 9 feet high by 7 feet 9 inches broad in the clear. The jambs are 1 foot 10 inches thick. Round the door
runs a moulding, angled in the orthodox manner. Along the lintel runs a row of dentils, cut on a plate with peculiar oblique
terminations. Above the cornice rises a moulded pediment enclosing a sculptured tympanum ; at the sides of the pediment
are wreaths, and above is the usual anthemion finial. From the top of the finial to the sill of the entrance is a little over
15 feet”. 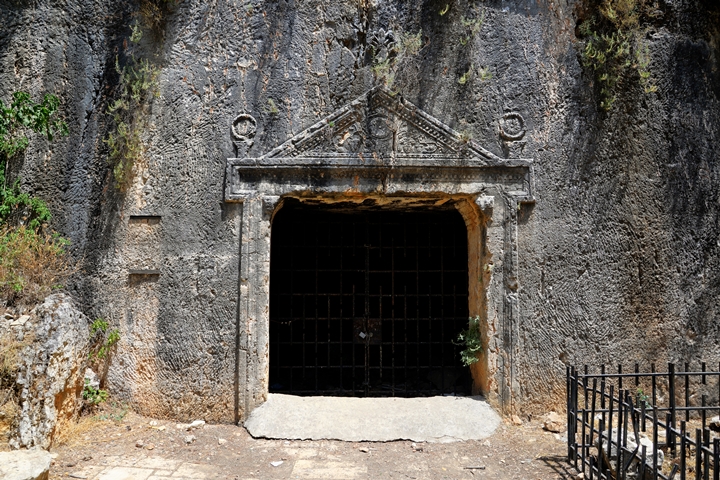 “Along the bottom of the tympanum [BW: decorative surface above the entrance] runs a strip of egg moulding ; the remainder of the surface is sculptured with a
pattern of vine branches, with grapes and leaves, surrounding a central rosette”. 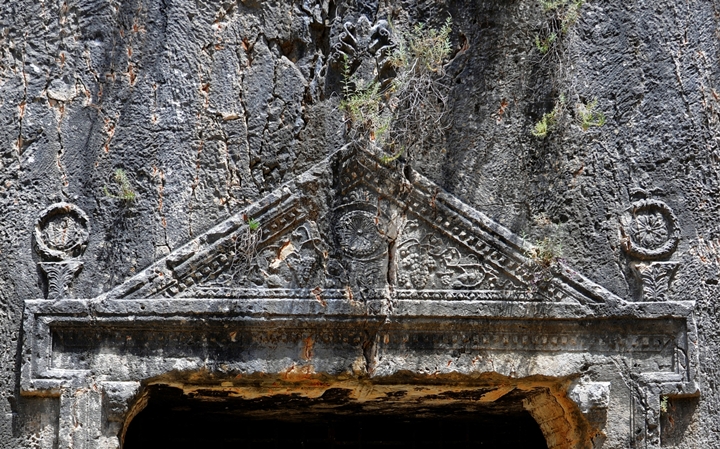 “This composition is, on the whole, inferior to the beautiful design that fills the corresponding place in the ” Tombs of the Judges.” The general effect is good, but the details will not bear close investigation, and reveal much carelessness. Thus, the branch on the left hand side of the rosette does not spring from the circumference of the rosette, as it obviously should have done; and there are several places in which subsidiary twigs are made to spring from the parent branch in a direction contrary to the growth of the plant. Such solecisms betray the hand of the provincial sculptor”. 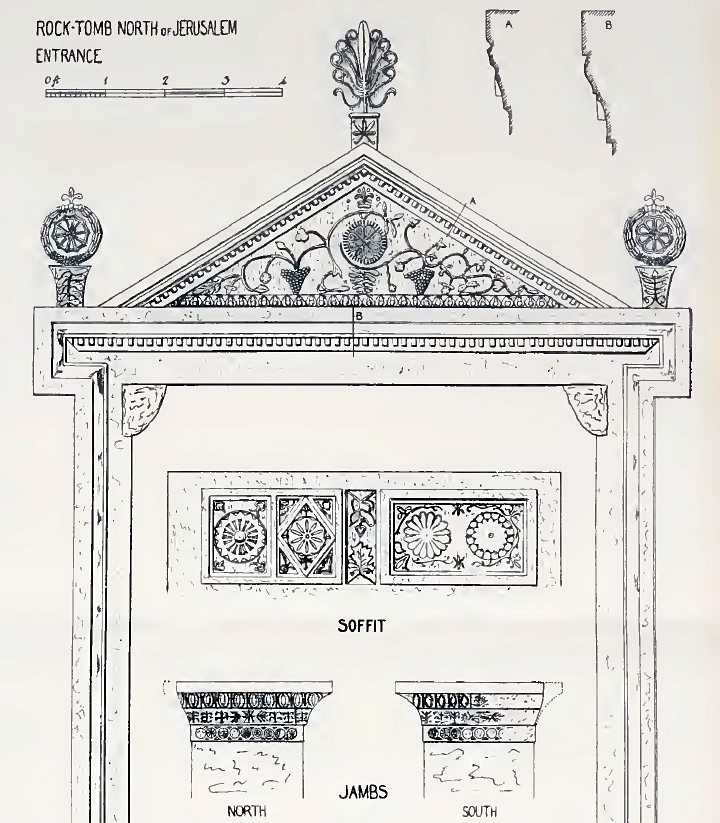 “The jambs of the entrance [see below] have capitals of singular design. On the outside surface the ornamentation is weathered away. The moulding consists of a plain abacus and a cavetto [BW: concave moulding with a regular curved profile that is part of a circle], which latter is carried as a cornice round the whole of the vestibule inside the entrance. On the jambs the cavetto is naively divided into two portions by a horizontal fillet. The abacus is left plain ; the upper half of the cavetto bears a row of egg and tongue (in the south jamb oddly interrupted in the centre by a palmetto [BW: fan-shaped leaves of a palm tree]; in the north jamb the inner egg has two envelopes on the inner side) ; the lower half of the cavetto bears a row of palmettes, of poor design, arranged in couples symmetrically with respect to a single lower in the centre – each couple being of different design to the rest. The innermost palmette in the northern jamb is separated from the rest by a vertical bar. Beneath the cavetto is a row of roundels tilled with rosette of varied design”. 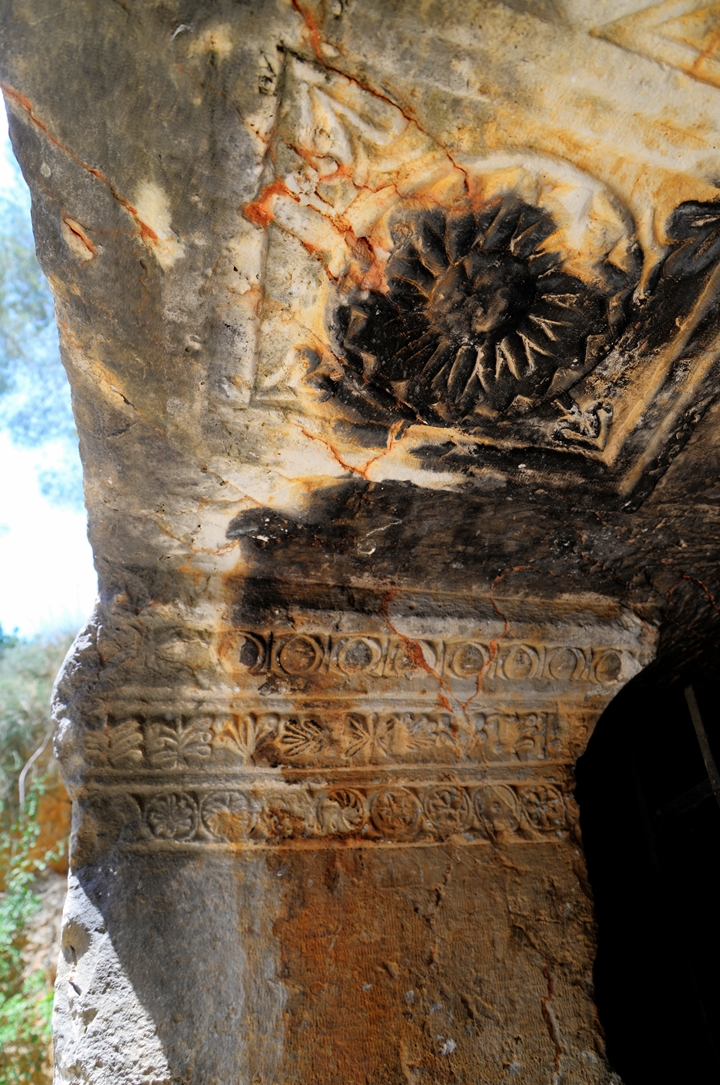 “The soffit of the entrance is also sculptured—a feature that distinguishes this tomb from all others known near Jerusalem. This portion of the ornamentation is the most successful. It consists of three panels, two in relief, and one, which is smaller, sunk ; each containing geometrical and floral patterns…” 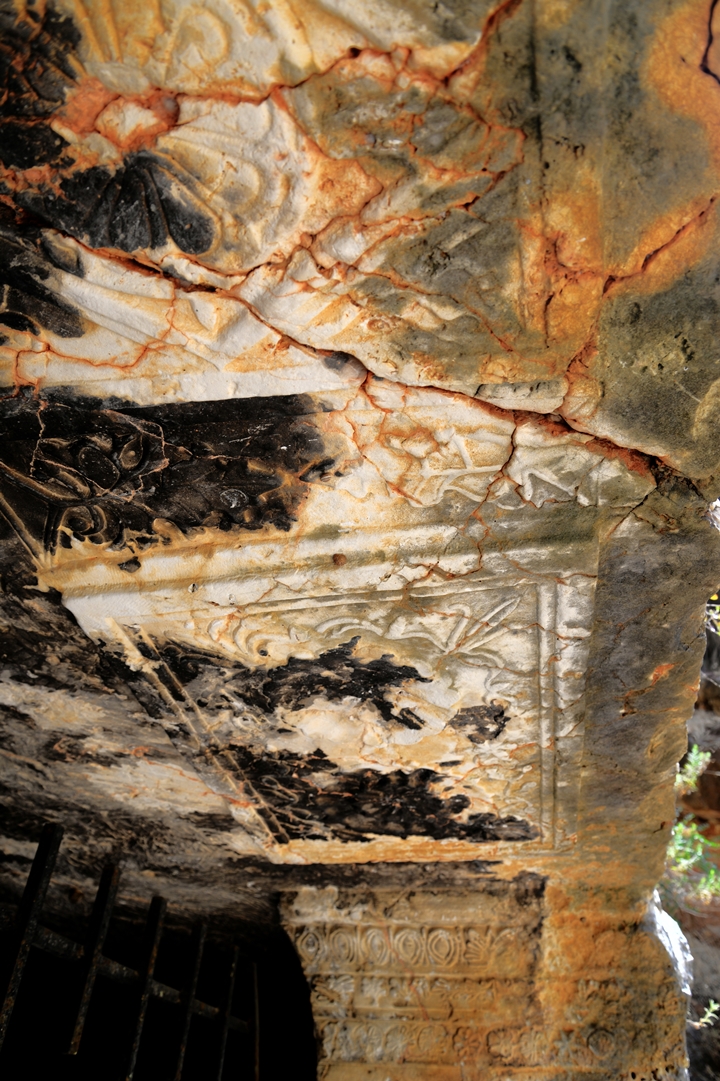 “The entrance above described gives access to a vestibule which, from its large size, is another unique feature of this tomb. In most rock-cut tombs in the neighborhood, not excepting the “Tombs of the Judges,” the vestibule, when it exists at all, is of small size. The dimensions of the vestibule in the present tomb are about 11 feet by 17 feet, but neither it nor any other of the chambers is truly square. Round the top of the wall runs the cavetto cornies already alluled to, and in each angle of the chamber is a pilaster. The shafts of these pilasters display an exaggerated entasis (1 inch in 7 feet). The capitals are decorated with discs (merely blocked out and never finished in the two southern angles), above which is a moulding not returned round the edge of the capital. The ceiling and walls of this chamber have been finished off with a fine chisel about a quarter of an inch in breadth.
A very narrow entrance, which cannot have been more than 2 feet wide, led originally to the chamber marked II on the plan. Over this entrance was a finial, resembling that in a similar position at the ” Tombs of the Judges “. The whole of the eastern side of the vestibule, however, between this entrance and the north-eastern corner has at some time been quarried away, so that a large irregular hole is now broken in the wall that once separated the two chambers ; the corner of Chamber III also has been removed, with part of an adjacent loculus”. 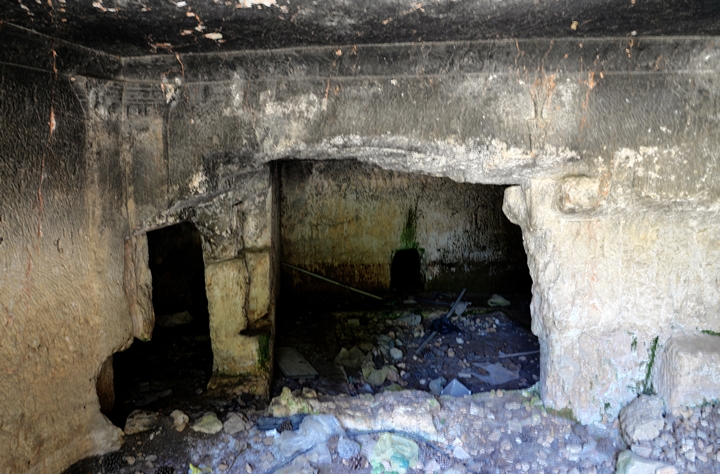 The plan of the cave was mapped, appearing in the 1900 PEF quarterly statement report: 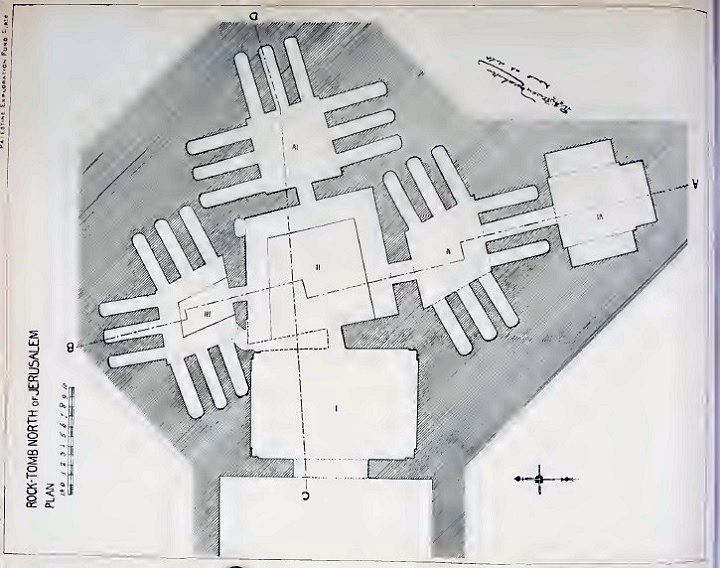