Remains of an ancient Tel and a small Crusader period keep near Kefar Yonah.

At Khirbet Bergth (Horvat Burgeta), near Kfar Yonah in the Sharon region, are remains of an ancient Mound and a section of a Crusaders period keep (a fortified tower within a fortess).

The only visible surviving wall stands high above the mound and is seen from highway #57 to Netanya. The “Red tower”  is named after the reddish Loam soil (Hebrew: Hamra) on which the mound was built.

The aerial map shows the location of the site on the north side of highway #57 west of intersection with Hwy #5613. Entrance to the site is from an opening from the highway to the nursery. 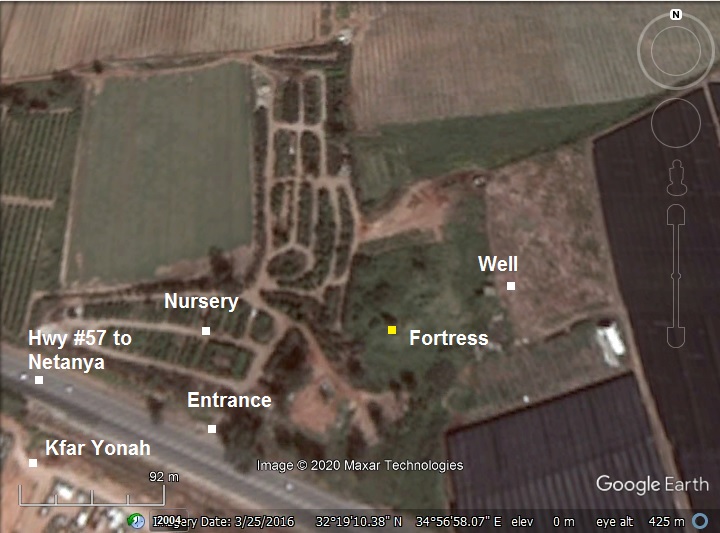 Structures and ceramics at the site indicate presence during the Israelite, Persian, Roman/Byzantine, Crusaders and Mameluke periods. The following details these periods:

In ancient times a road passed here connecting Tel Hefer (Tell ‘Ifshar) to Samaria. This was probably a farming village and a stop along the route.

A Jewish village of Burgeta was documented in the Talmud (4th century AD) as a wine producing village which its wine was forbidden for ritual practices since its neighboring villages were inhabited by Samaritans.

The Roman/Byzantine village was located on the side of the Roman road from Neapolis (Shechem, Nablus) to Caesarea. This ancient road  passes through Wady esh Shair (Shechem stream, which flows into the Alexander stream), and continues to Jerusalem.

The Peutinger Map (Tabula Peutingeriana) is a medieval map which was based on a 4th century Roman military road map. The map shows the major roads, with indication of the cities, and geographic highlights (lakes, rivers, mountains, seas). Along the links are  stations and distance in Roman miles (about 1.5KM per mile). The roads are shown as brown lines between the cities and stations. In the section shown below is the area of Jerusalem, drawn in a rotated direction (Egypt on the left, the Mediterranean sea on the top). Jerusalem is illustrated in the center as a double house icon, which represents a major city. It is listed as “formerly called Jerusalem, now called Aelia Capitolina” (antea dicta Hierusalem n(unc) Helya Capitolina).

The section where the Roman road passes through Kh. Bergth is indicated as a red square, close to Caesarea (“Cesaria”). This Roman road, from Caesarea to Nepolis (Shechem – marked with a double-house icon), is XXXI (31) Roman miles, or 46 KM. Another road to the south continues to Luddis (Lydda, Lod), shown as another brown line (XII miles). 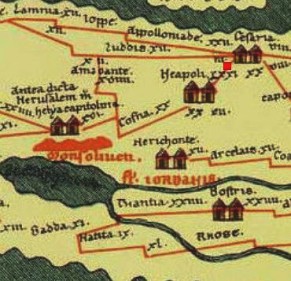 The Crusaders protected their routes and their farming estates with a series of forts and police stations. In the Sharon region are a number of Crusader fortifications.

The tower seen today was built between years 1110-1150, according to the archaeological survey in 1983. The Crusaders town was controlled by the Crusaders lords of Caesarea. These knights were of the Templar order,  a military-religious organization which was established in 1118, naming their organization after the temple: the guards of the temple. Their task, as defined by the pope, was to protect the pilgrims and patients that visited the Holy Land.

It was property of the order of the Knights Templar until 1189. A Benedictine covenant (St. Mary Latin Abbey – “Maria Latina”, of Jerusalem) was erected on the site,  acquired by the Knights Hospitallers in 1248. It may have been in possession of the  covenant in an earlier date (1158), as it appears on its records.

Roads: The road through the site continued south, passing thru the following Crusaders fortresses:

The road north to Caesarea passed thru the following Crusaders sites:

The Mamelukes were Turkish prisoners who were sold to the Sultan of Egypt, trained by him and served as his palace guards. In 1250 they seized the control of Egypt, and defeated the Mongols (1260).

The Mamelukes took the Sharon area in 1265, and destroyed the tower. This destruction was part of the systematic destruction of Crusaders fortifications by Baybars in the Sharon region. The remaining wall was the only part left of the Crusader structure.

The stones from the tower were reused by peasants who resided in the medieval village starting in the late 13th or 14th century. They built stone and mud houses on and around the mound. On the mound are remains of these houses.

Conder and Kitchener surveyed this area during the Survey of Western Palestine (SWP) in 1873. A section of the survey’s map, part of Sheet 11, is shown here. The site is named Burj el ‘Atut (“the overthrown fort”). 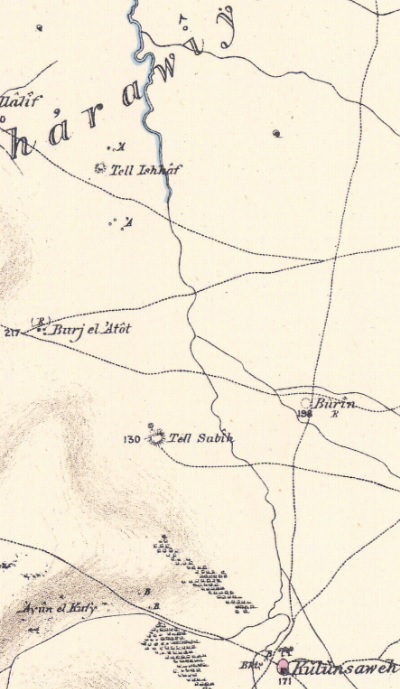 Part of Map Sheet 11 of Survey of Western Palestine,

“Burj el ‘Atut—Remains of a tower, apparently part of a Crusading castle. The wall remaining measures 30 feet east and west, and on the inside, towards the north, is a vault 25 feet long (north and south) and 12 feet broad. This is about 20 feet high. The wall on the south reaches up to a height of 40 to 45 feet, and has inside it a buttress dividing the building into two aisles, north and south. The walls of the vault are 5 feet thick ; in the west wall is a small archway about 3 feet high, the arch pointed with two rings of voussoirs, five in the inner, seven in the outer, the keystones cut away to form the point of the arch. In the south wall, high up, is a loophole window some 4 feet high and 3 feet wide inside, and about 6 inches wide outside. The direction of the south wall is 104° ; it is 8 feet thick, built of very hard limestone, rudely dressed with soft white mortar and a packing of small stones 3 inches to 4 inches side. The ashlar measures 1 foot by 1.5 feet, to 2 feet by 1.5 feet ; the arches seen were all pointed, the arch of the vault a tunnel-vaulting of smaller stones than those in the walls. The masonry is laid in courses with the vertical joints carefully broken. The place is inhabited by a peasant family. Visited 5th May, 1873.

A Moshav was established in 1949, named Burgata. It is located 1.5km north east of the site.

Excavations were conducted here in 1983, sponsored by the British School of Archaeology in Jerusalem, and headed by D. Pringle – an expert in Crusaders archaeology and history.

The remaining Crusaders wall is in danger of destruction. A  plant nursery surrounds the ruins, and piles garbage and rocks on the mound.  The south side of the mound, with its tall Eucalyptus trees that once grew on the south side, were mostly cut down due to the clearing zone around highway #57 that passes along its south side. We appeal to save the site!

The tower was situated on a low raised rectangular mound overlooking the area. A short section of the tower is still standing today. This 15m high section is the southern wall of the Crusaders tower. The wall is 2m thick.

There were 2 floors, as seen by the height of the arrow niches on the upper row. 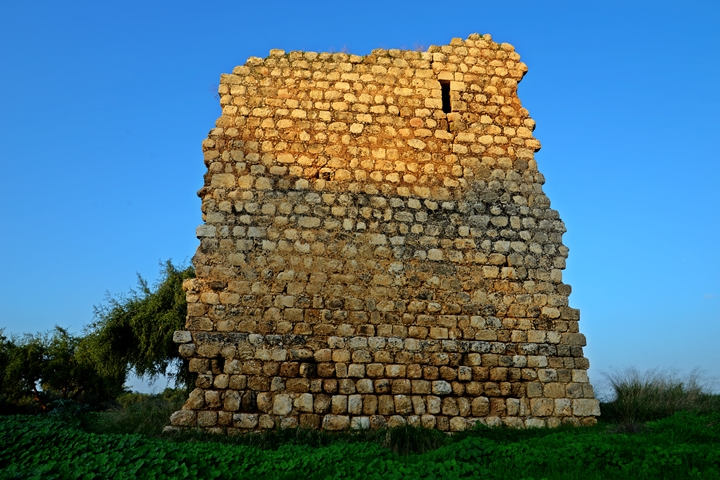 The upper photo is from the south side, while the next photo shows the northern side of the wall.

The Crusaders used arched vaults to build their structures. On the ground floor there were 2 barrel-vaulted chambers built side by side in direction north-south, each 4.8m wide, 15.5m long and 6m high.

The visible arch on the left is part of the eastern vault. The western vault was separated by a wall 1.65m thick. 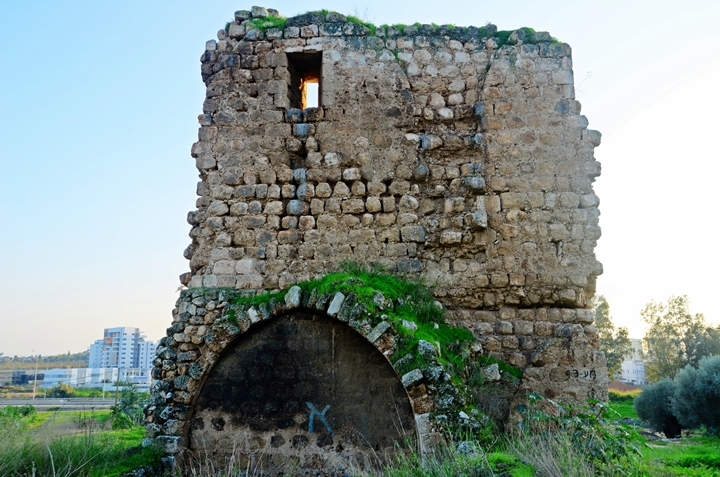 It is estimated that the size of the tower was 30 square meters, measuring 19.7m (north-south) by 15.5m (east-west). Sections of the ground floor were exposed during the excavations, allowing the team to draw a plan of the tower-keep.

An outer wall, 2m thick, was exposed on the western area. It enclosed an area roughly the size of 60m by 60m. This covers the area of the raised mound. The tower was in the center of the outer wall area. Bases of other structures were also exposed on the north and west sides of the tower – part of the Crusaders castle.

Based on these findings, a figurative illustration of the Red Tower and the enclosed area of the castle is seen below, with a view from the north east. The surviving wall of the tower is the one facing the south. 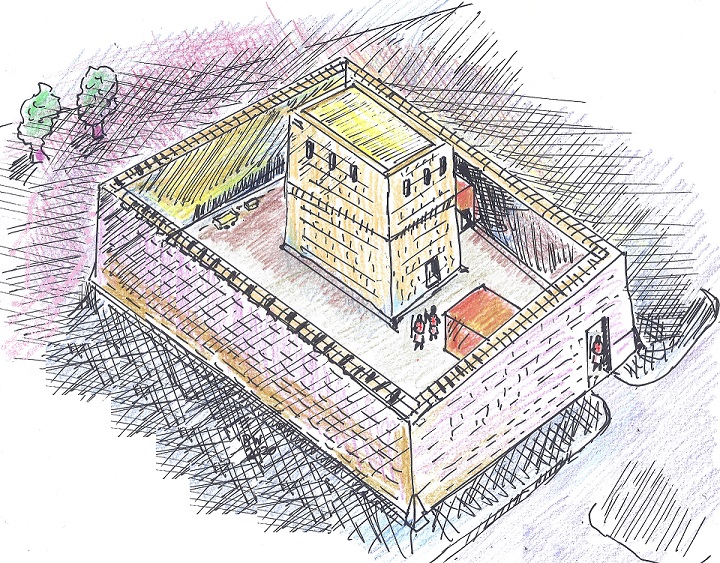 North east of the tower is a Ottoman/British well. This was probably the source of the water supply for the ancient village and the tower. The area around the site is blessed with water supply sources, with dozens of wells in the vicinity. 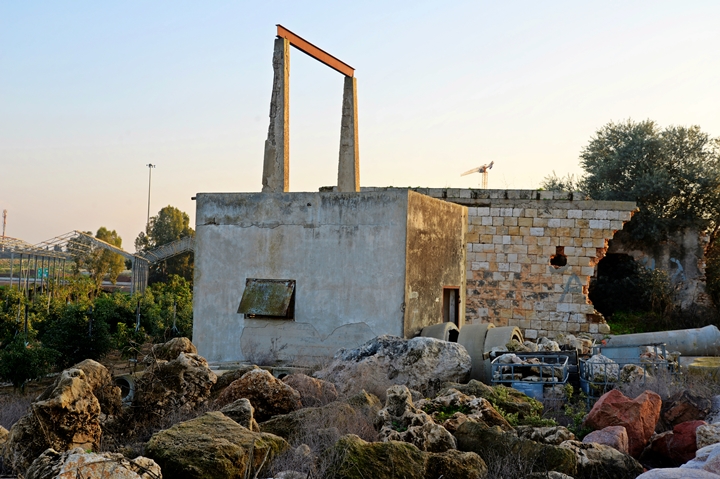 Burgata, a Moshav that was established in 1949, is located 1.5KM north east of the tower. It was named after the Roman period village. 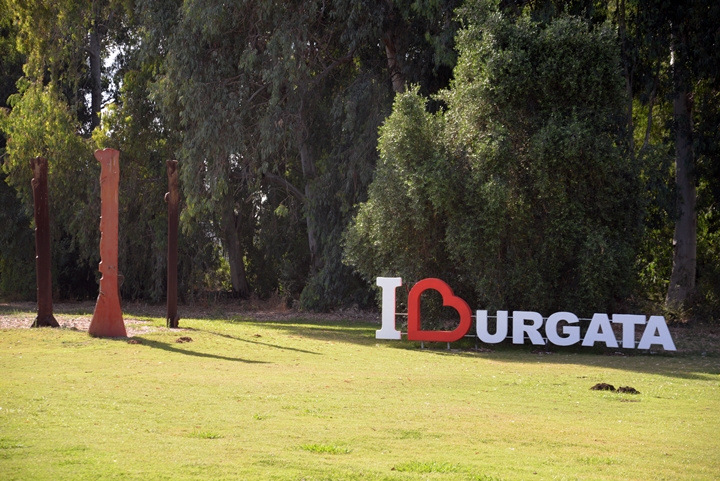 In its center is a garden with an open exhibition of metal sculptures. They were made by Yigal Tumarkin, a famous Israeli sculpture and painter, who operated his studio in Burgata.  Tumarkin’s  anti-establishment metal works reflect a protest against war and various political actions. 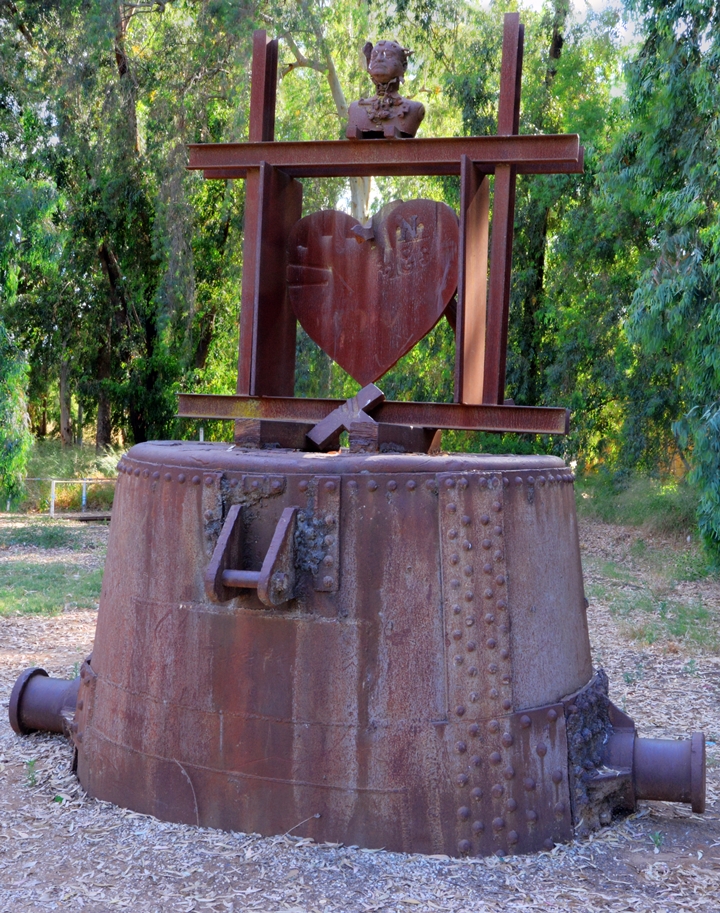 His works are grouped in several other sculpture gardens in Israel, such as in the Crusaders fortress  Belvoir. This famous artist had a “Crusader” bug since his service in the Navy in the Atlit Crusader fortress, and his Crusader-inspired sculptures are on display there as well as in Ramle and Acre. 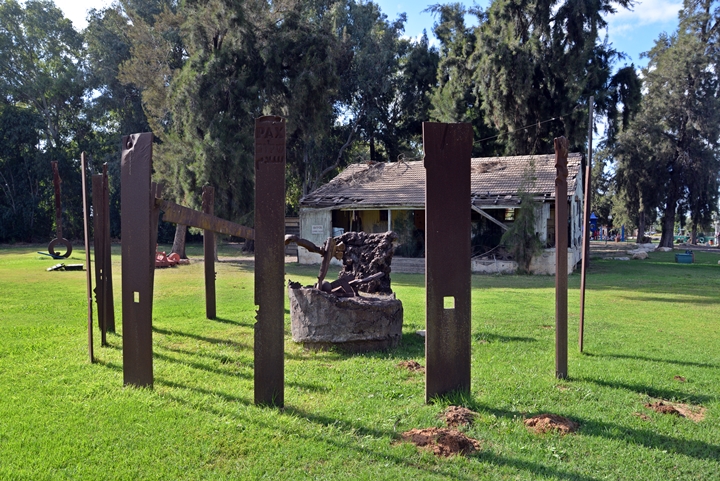 BibleWalks.com – after the lost Biblical cities