Multi-period sites of Qa’un, on the side of a major trade route.

Khirbet Qa’un is a large ruin located on a ridge along the south bank of Nahal Qa’un, on the south western edge of the Beit Shean valley. Covering 90 dunams with dozens of ruined structures, the village was populated during the Late Roman and Byzantine period. Its ruins were reused in later periods.

In the vicinity of the Byzantine village is a cluster of 6 other sites of various periods, starting from the Chalcolithic and Early Bronze age. This large concentration of sites centering in a small area were due to the year long water supply of the Qu’an spring, the major route that passed here, and the fertile farming areas around the sites.

An aerial map is shown here, indicating the major points of interest around the sites of Qa’un south of wadi Qa’un (marked by yellow squares). The sites are numbered 3-6, based on the Manasseh Hill Country survey. The Roman/Byzantine period village, later occupied in middle ages periods, is Site #6 – Kh. Qa’un. It is the largest site, covering an area of 90 dunams (22 acres). Site #3 is a Bronze period city, site #5 is of Intermediate Bronze age, and a large cemetery is in site #4. 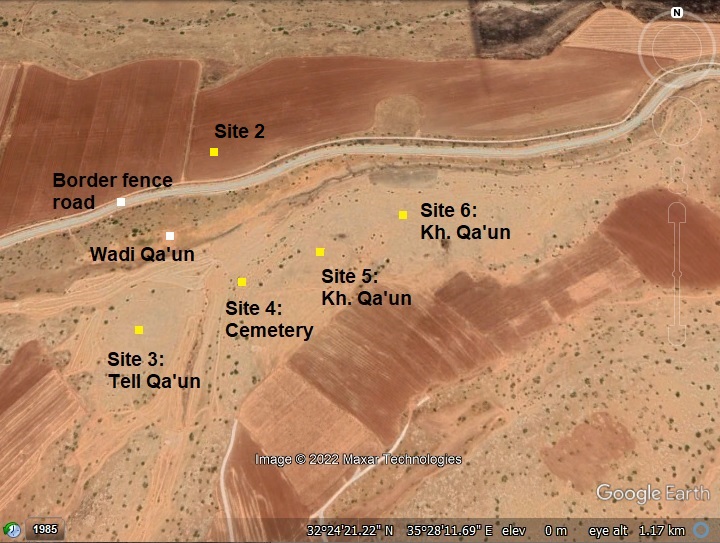 Settlement in the Qa’un area started from the Chalcolithic period on Tell Qa’un. The hill (Manasseh Hill Country survey’s site #3) was occupied on the west side of the spring, on the side of the ancient trade route. The fertile area around the site, and the water supply from the spring, provided farming capabilities.

Tell Qa’un (Site #3) continued to be settled during the Bronze period.

There are other Bronze period  sites in the near vicinity, north of Wadi Qa’un and the border fence –

The cities and roads during the Canaanite and Israelite periods are indicated on the Biblical Map below. The map shows the 2 routes from Samaria to Tel Rechov (Rehob) and Beit Shean (most important sites in this region) and to TransJordan Mountains via the fords along the Jordan river near Tell es-Sakut.

The sites were surveyed by the Manasseh Hill Country survey (Volume 4 sites 1-7). 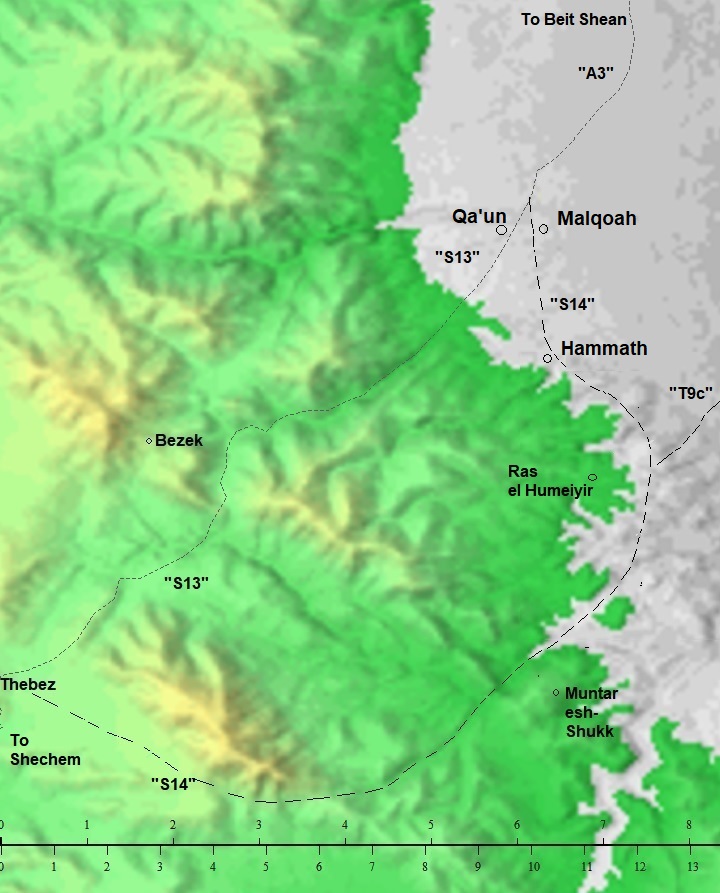 Map of the area around Qa’un- during the Canaanite and Israelite periods  (based on Bible Mapper 3.0)

David Dorsey (“The Roads and Highways of Ancient Israel”, 2018) shows a detailed map of the roads around the site during the Bronze/Iron age. The main road from Rechov/Rehob southwards is marked as A3. It passes near Tel Malqoah, 3km north of Hammath, where the road splits to two routes towards Shechem and Samaria:

After a drop of settlement activities during the Assyrian, Persian, Hellenistic and Roman periods, during the Byzantine period the region Beit Shean and Jordan River witnessed a surge in settlement and trade.

During this period a new settlement (Khirbet Qa’un (3), Site #6 in the MHC survey) was built east of the ancient Bronze/Iron Age sites. It spread over two ridges south of Wadi Qa’un and near the trade route that passed along the south bank. The settlement grew to a large (90 dunam) site.

The Byzantine settlement was probably destroyed during or a short period after the Muslim conquest of the land.  Mud houses were built over the Byzantine ruins during the Ottoman and modern period. In 1967, following the Israeli conquest, its residents relocated to nearby village Bardeleh. Since then the site is in ruins.

The area was examined in the Palestine Exploration Foundation (PEF) survey (1866-1877) by Wilson, Conder and Kitchener. They wrote about the site (Volume 2, Sheet XII, p. 238):

“Khurbet Kaaun —There are caves, and the place appears to have been an ancient site, perhaps Cola. (Judith XV. 4.)”

And also on page 227 the surveyors provided additional description of the mud-brick Ottoman village, but misidentified the site with Kaina – one of the stations of the Egypitans’ advance to conquer Megiddo during the 15th century BC:

“Khurbet Kaaun is a place of the same character, with mud hovels among ruins, and caves also inhabited. The place has the appearance of an ancient site and a fine spring. It may perhaps be the site called Kaina in the inscription of Thothmes III, which was a place with water and south of Megiddo, occupied by the southern wing of Thothmes’ army advancing from Aaruna (perhaps ‘Arraneh, Sheet IX.). These two identifications agree with the supposition that the Megiddo of this inscription is Khurbet Mujedda”.

This map is part of sheets 12 of their survey results, with Khirbet Ka’aun in the path of the ancient route from Samaria (exiting from Wadi Khashneh) to the Jordan valley. The caves marked east of the site are a large cluster of burial caves. 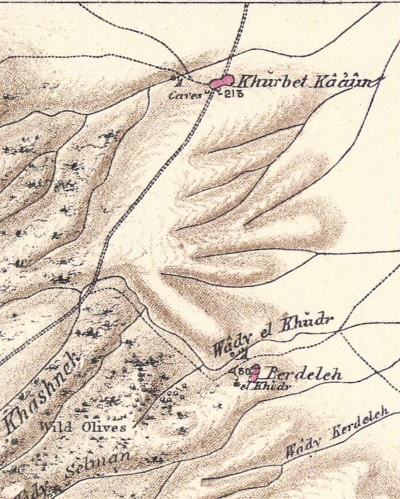 A 1940s British map shows the area around the site with more details.

The spring (Ain Qa’un) is shown to the west of the Ottoman period village, on the south bank of Wadi Qa’un. 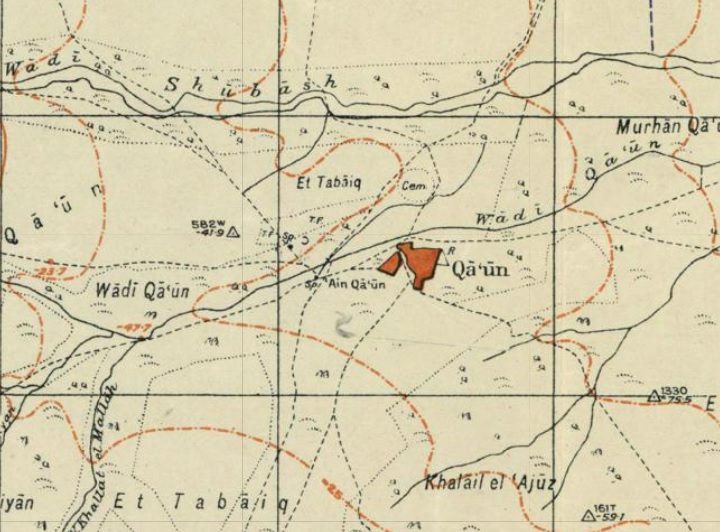 During the independence war, a force of the Arab liberation army, led by Fawzi al-Qawuqji, amassed 600 soldiers in Qa’un. In March 1948 a Palmach unit conquered the village and blew up 15 houses. After the war, its residents returned back to Qa’un. In 1967 the village was incorporated into Israel. The village was abandoned, and its residents moved to nearby village of Bardele.

The sites were surveyed by the Har Menasseh Country survey by Adam Zertal (volume 4, sites #1-7).

The largest site in the complex of 7 sites on both sides of Wadi Qa’un is Khirbet Qa’un(3), which was settled in the Late Roman period and reached a peak during the Byzantine period.

The following aerial view shows the site from the east side looking towards the west with the Samarian hills in the background. The ruins are spread over 90 dunams, on top of two ridges that descend to the south bank of Wadi Qa’un. 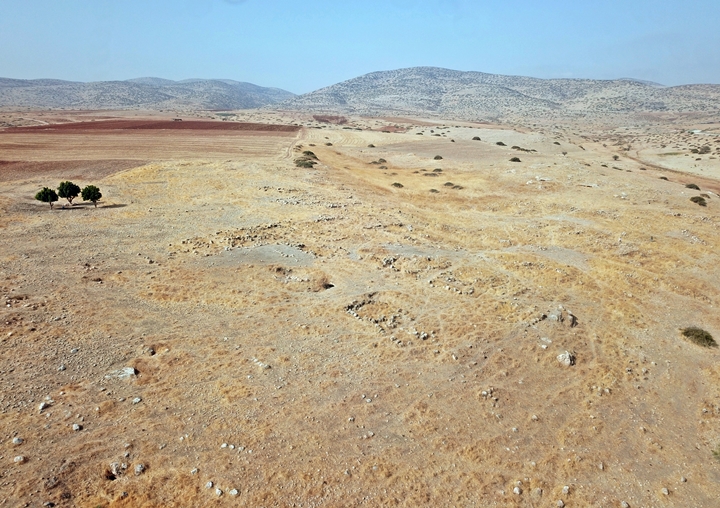 Khirbet Qa’un has 2 sections that are separated by a low valley – an eastern and a western section. This is indicated on the following illustration, with the 2 main parts of Khirbet Qa’un.

The ancient route from Samaria passed along Wadi Khashneh, via Qa’un, along  Wadi Qa’un, descending towards the Jordan valley. 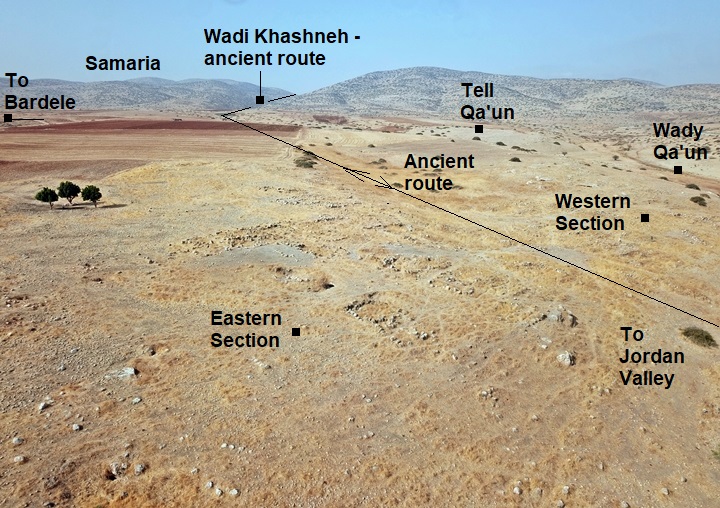 Each of the sections are detailed below.

The eastern section of Khirbet Qa’un is located on a ridge bounded by two low valleys. This aerial view shows the entire area of this section and the traces of ruins that are visible. 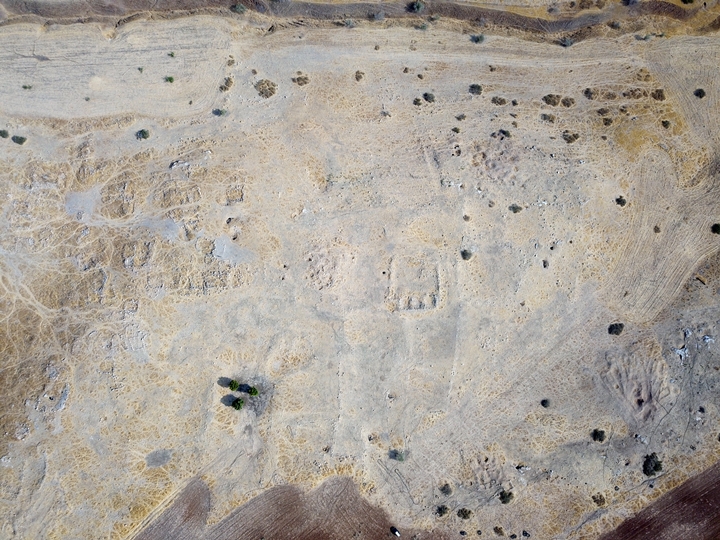 On the eastern side of this section are remains of a large 40x40m structure. 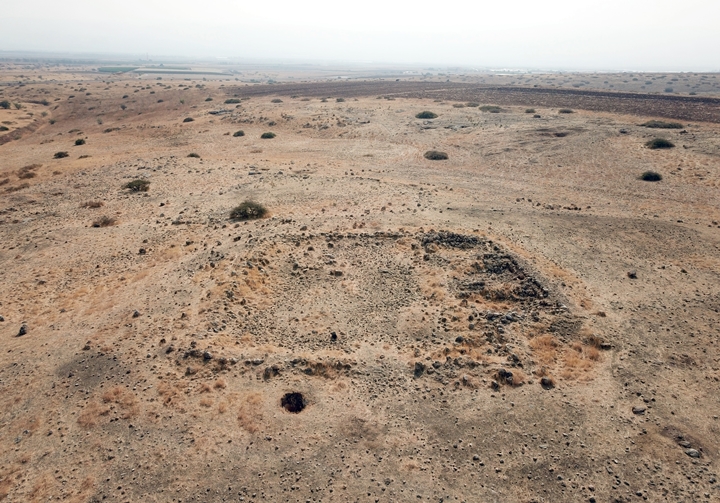 A ground view of this structure is shown below. On its south side are 3 rooms. 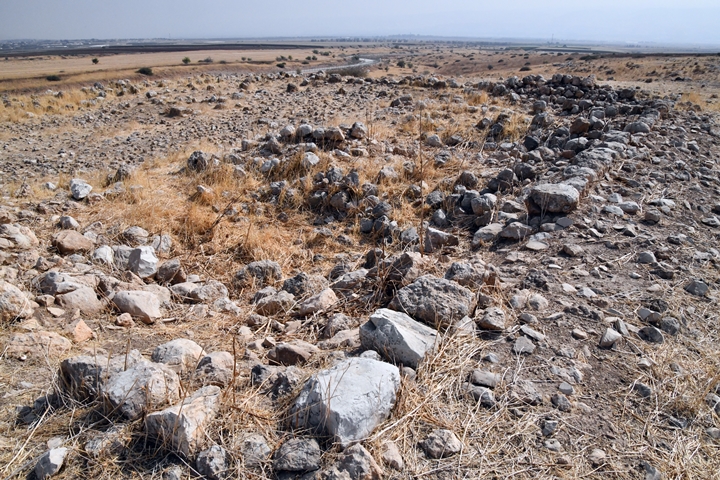 To the west of the large structure are additional traces of ruins.

In the view below are the scattered ruins, and Wadi Qa’un below the foothills. On the north bank is the security fence and the security road. 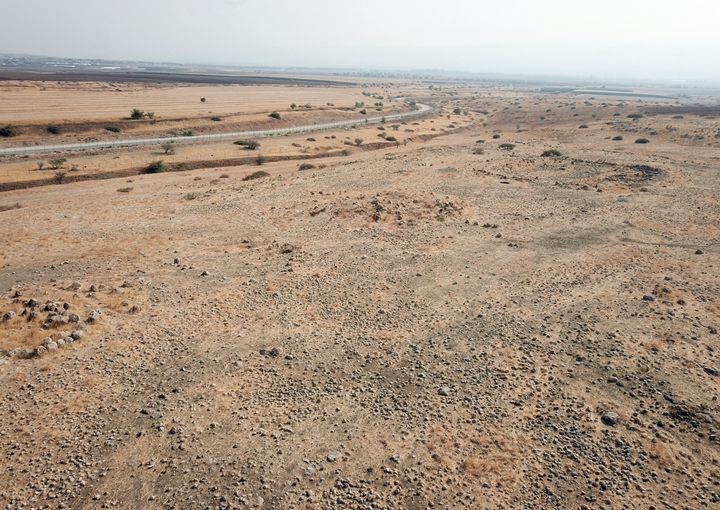 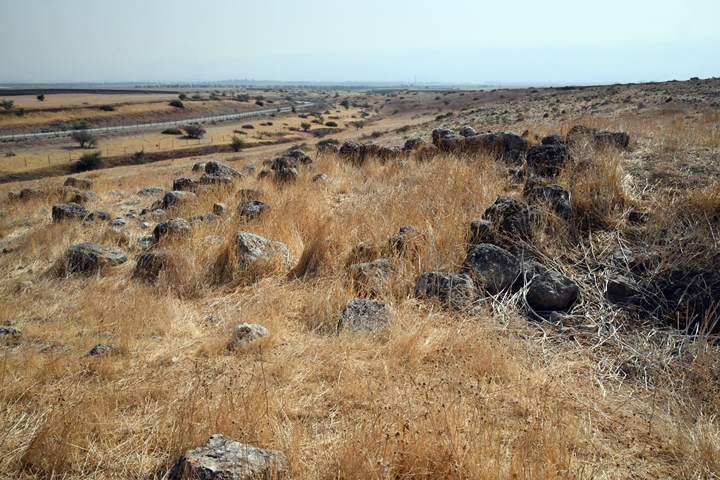 On the south side of the large structure are additional courtyards that are bounded by straight lines. Notice the long walls to the left of the triple trees. These courtyards are also located on the south western areas.

Also, farther on the south-east side, are many Byzantine period burial caves that are built along the ridge.

Below is an aerial view of the south east side, with a view towards the south: 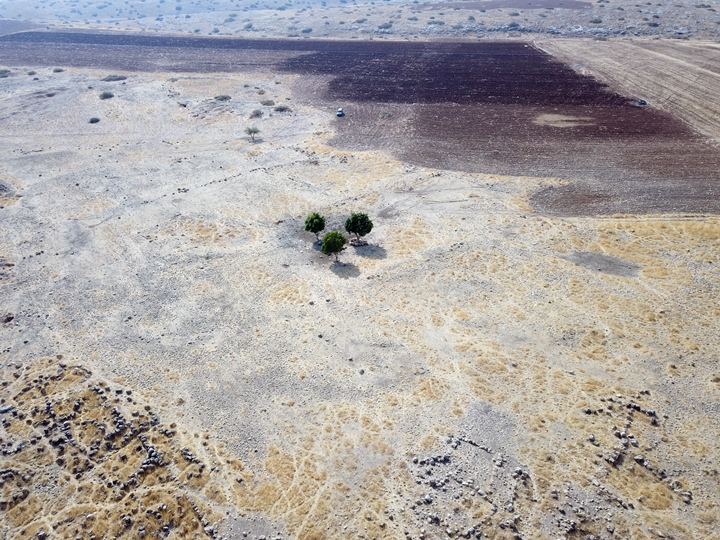 Uncle Ronnie and archaeologist Ayelet Keidar examine bases of the walls on the southern side: 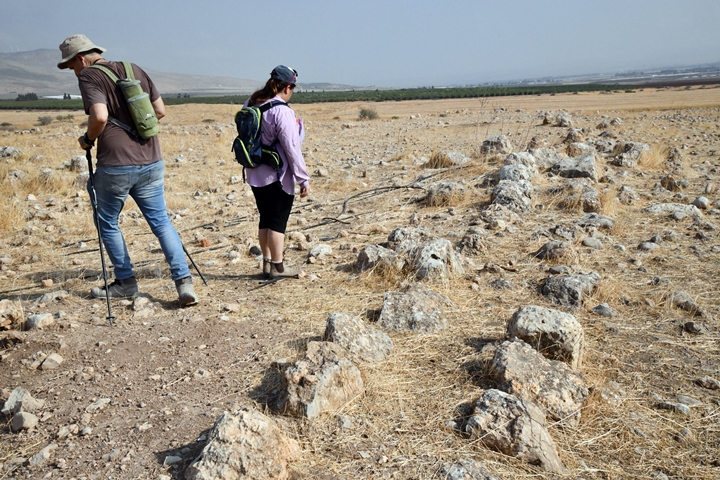 On the western side of the eastern section is another group of about 30 more structures. 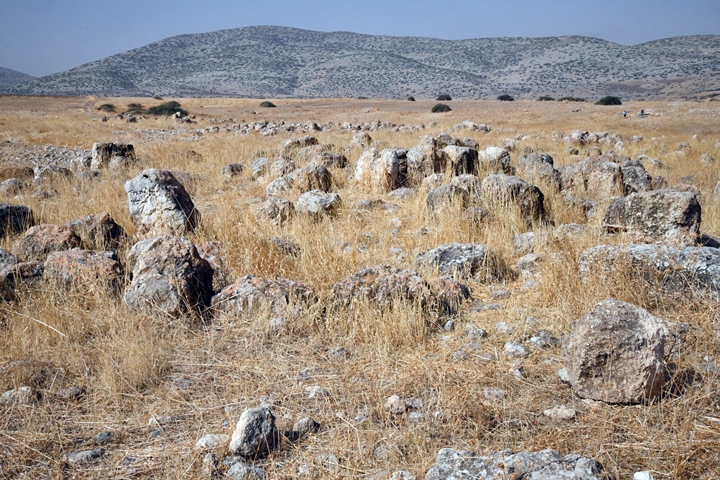 Yet another structure is in the next photo. These ruins were remains of the Roman/Byzantine period, and were reused during the Middle Ages and Ottoman period. 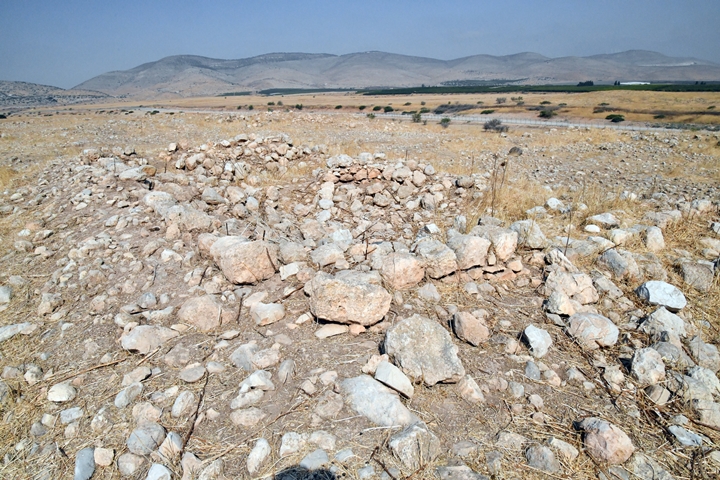 The western section of Khirbet Qa’un occupies a ridge that is separated from the eastern section by a low valley. 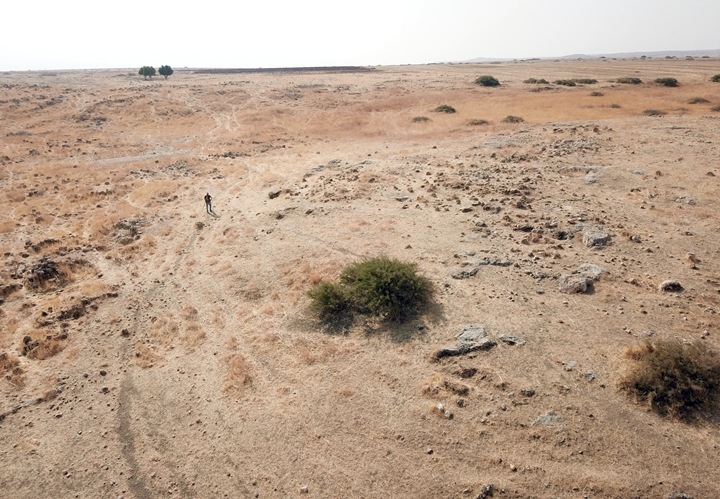 On the western section are 20-30 additional structures. Most of the structures have a underground cave that was used a a cellar. 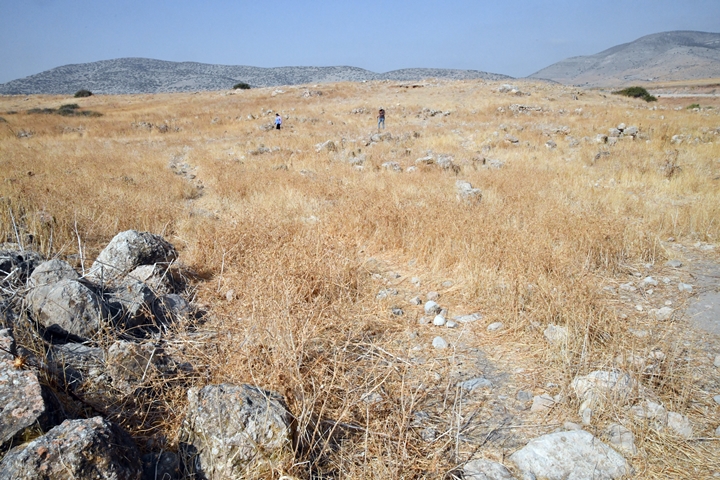 The western section was the center of the Arab village.

The following view is from the western section looking towards the eastern side. 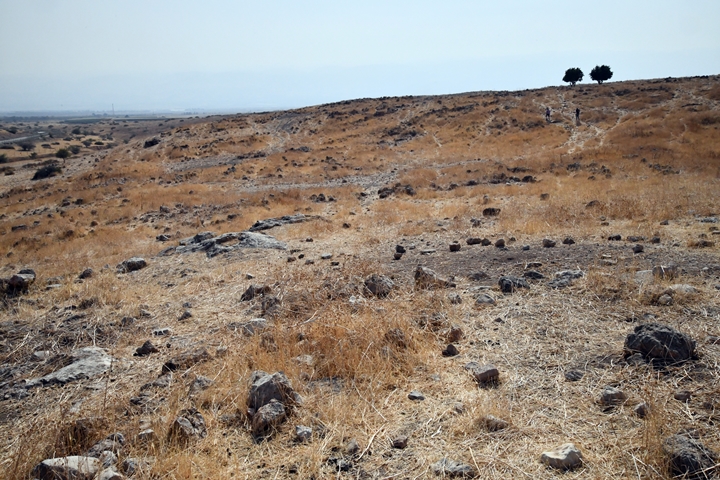 Fly above and around Khirbet Qa’un with this YouTube video.

Video and photos captured on Sep 2022 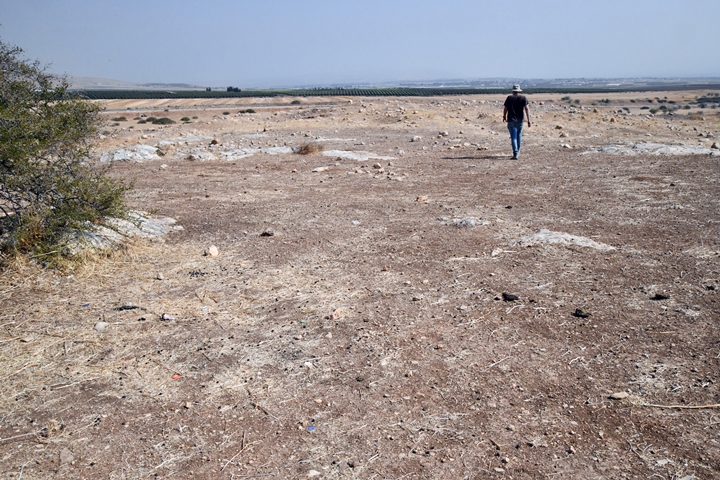 The site has been severely damaged by farming. 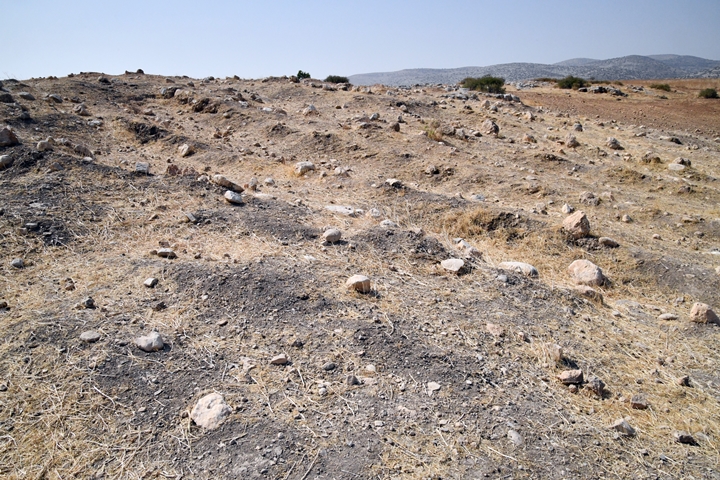 Few structure remains are seen on this low hill. 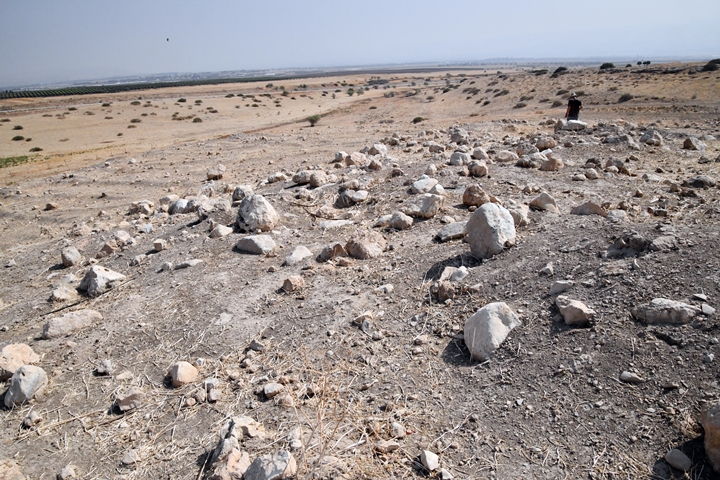 A peripheral wall may have been constructed around the site. Only few sections of the wall were found. 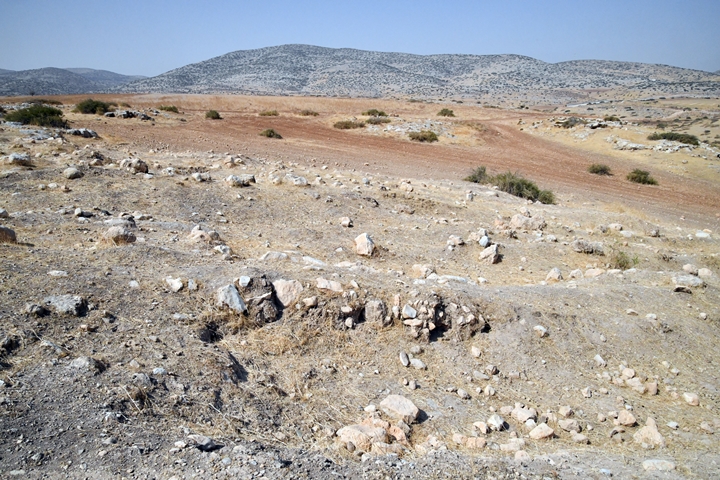 Evidence of illicit digging can be seen on the hill. 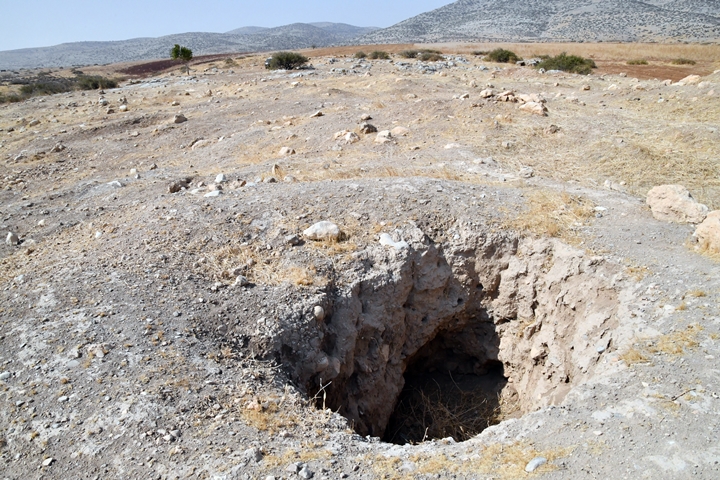 We examined some of the ceramics found on the mound. 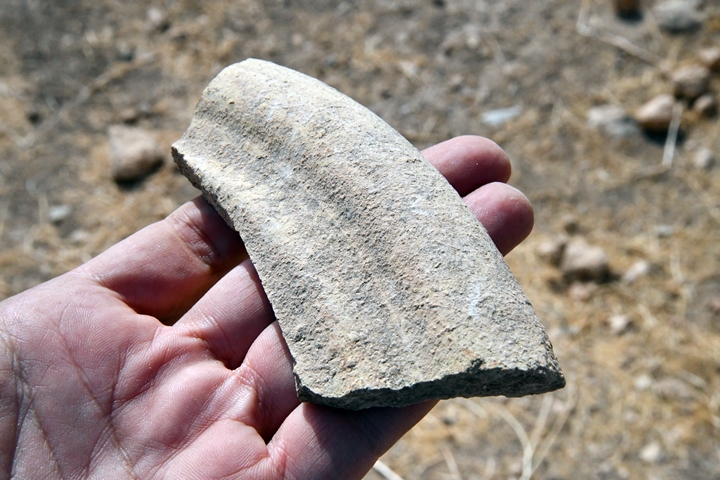 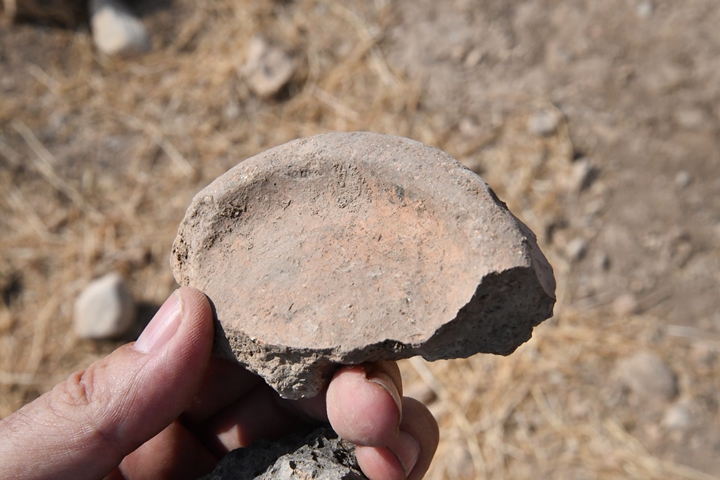 BibleWalks.com – “Arise, walk through the land in the length of it and in the breadth of it…”

This page was last updated on Sep 28, 2022 (add Biblical identifications)