Nahal Arugot brook  (Wadi ‘Araja) is a nature reserve in the Judean desert. It flows to the Dead sea passing through  Ein Gedi. The Hebrew name (“flower beds”) is based on the Arabic form (Wadi ‘Araja – the ascending brook).

The brook flows on the southern side of ancient Ein-Gedi and was one of the  sources of the water supply. Ein Gedi was inhabited starting from the Chalcolithic period, and a temple from that period was excavated there.

This area is where David hid from the pursuing King Saul (1 Samuel 23 29: “”And David went up from thence, and dwelt in strong holds at Engedi“).

Nahal Arugot flows into the Dead sea, passing through Ein Gedi. An aerial map of the area is shown below, indicating the major points on interest. 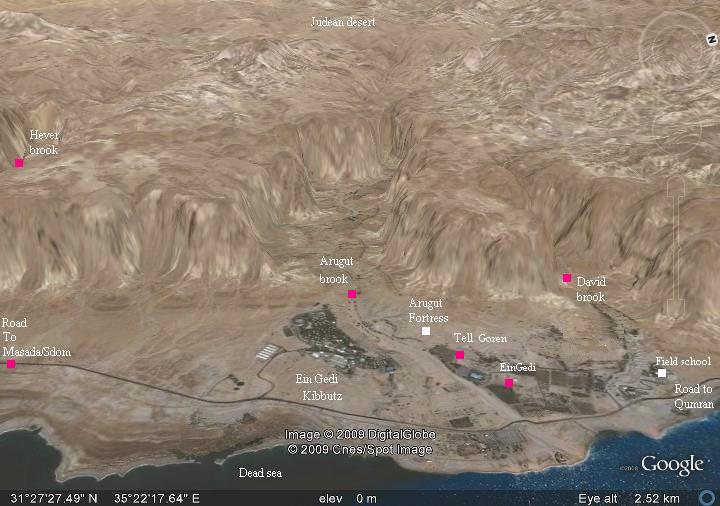 All photos in section (a-c) by Shay Shtickgold.

A view of the upper side of Nahal Arugot is seen below. 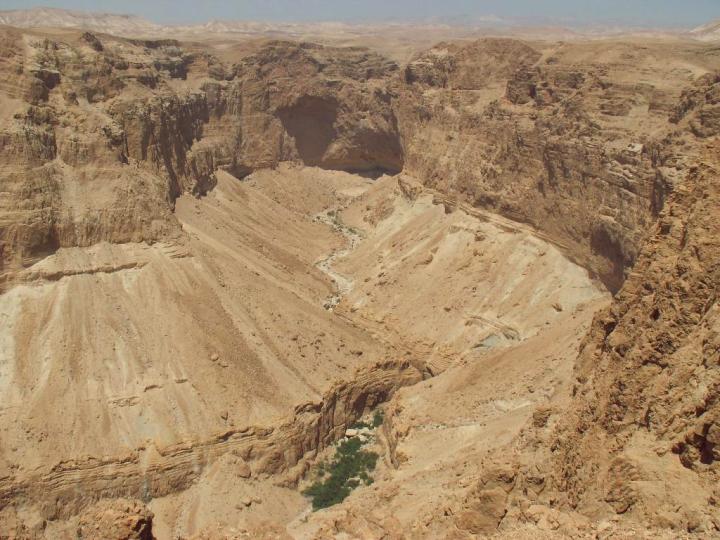 A closer view of the gorge. The canyon, 500M deep, was created by the powers of the water that rushes down the valley in the few rainy days during the winter time. Its drainage area covers 200 square KM.

Nahal Arugot is one of the few canyons in Judea desert with water all year round. It has a number of springs that provide water throughout the entire year. This was one of the sources of water to the ancient site of Ein Gedi. 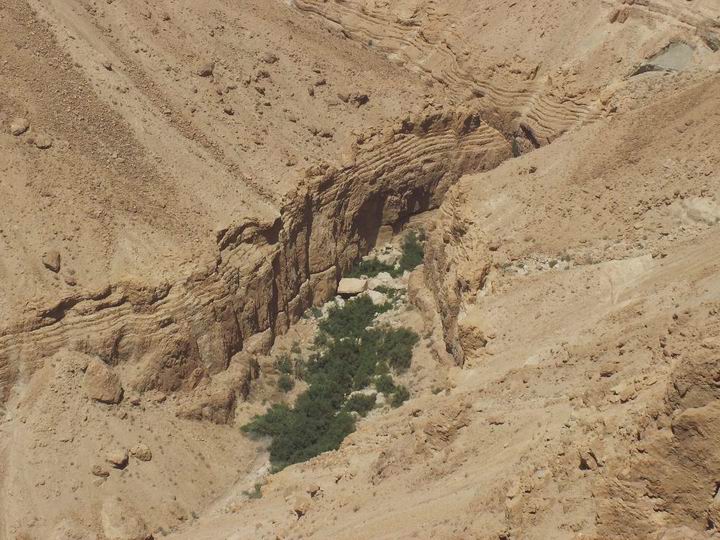 Another view of the western edge of the valley is seen below. 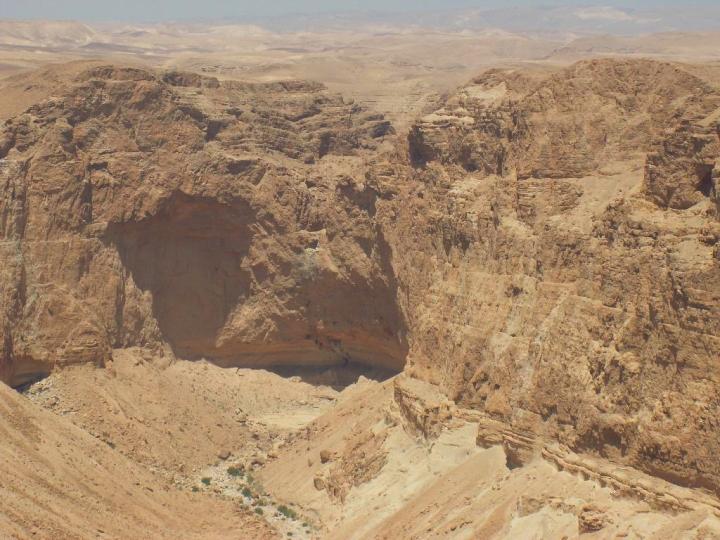 The photos below show views of the eastern side of the brook. The Dead sea is seen on the left background. 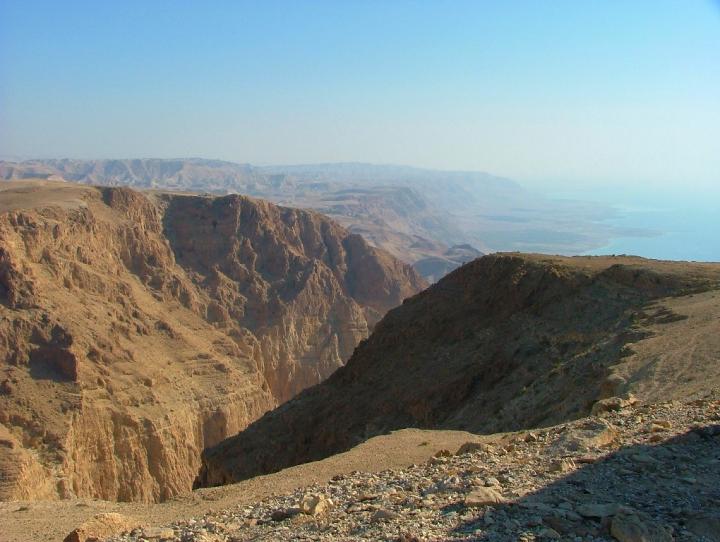 Another view of the Dead sea is seen below, with Ein Gedi on the far lower right side. 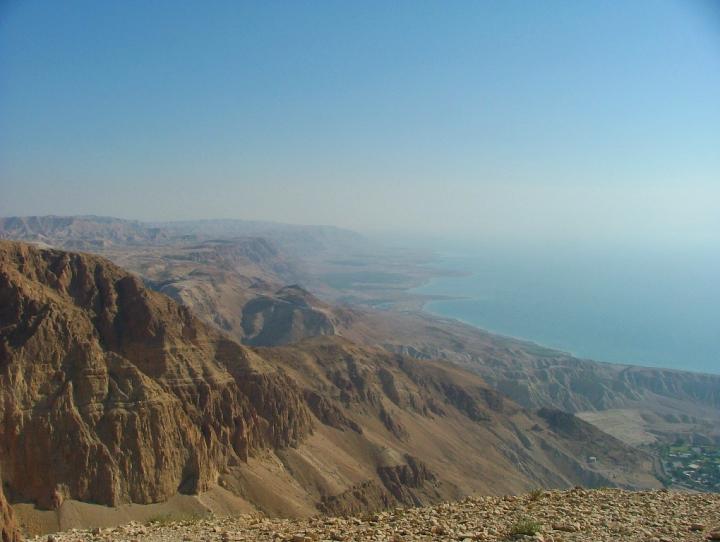 The Dead Sea water level is retreating in recent years. One of the natural phenomenon is the recent appearance of large sinkholes, as seen in the photo below taken from the cliffs and looking down to the Dead sea. 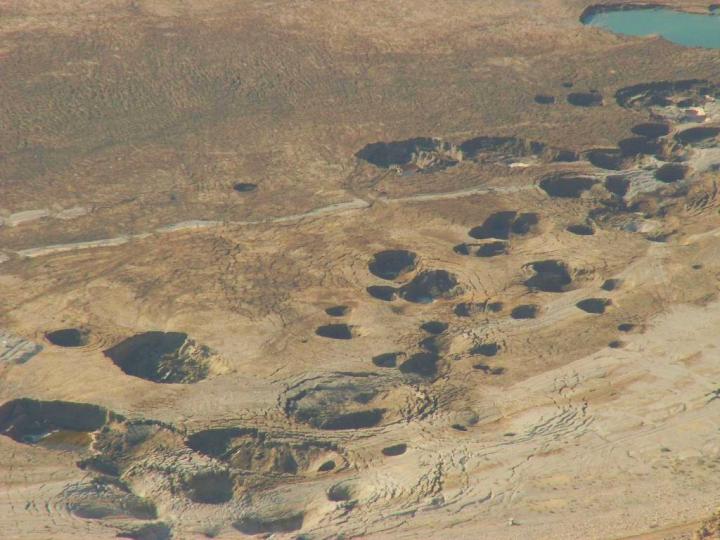 All photos in this section by Tuvia & Shachar  Liran.

Nahal Arugut is a popular hiking site. The hot and dry desert climate are balanced by the springs and running water along the creek. The following photos show some of the sites along the canyon of Nahal Arugot.

The trail follows the path of the canyon, as seen below. The maximum length of the trail is 7KM, starting from the parking lot of the Nature reserve of Nahal Arugot north of Kibbutz Ein-Gedi. 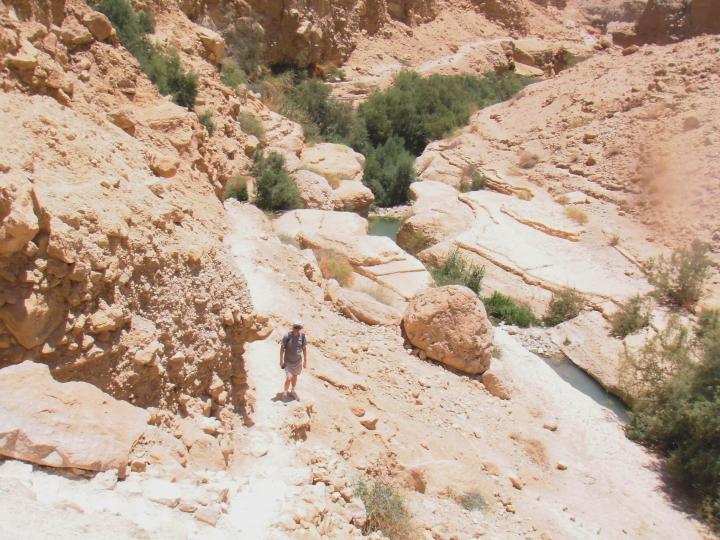 Along the path of the canyon you can refresh yourself by dipping into the pools. 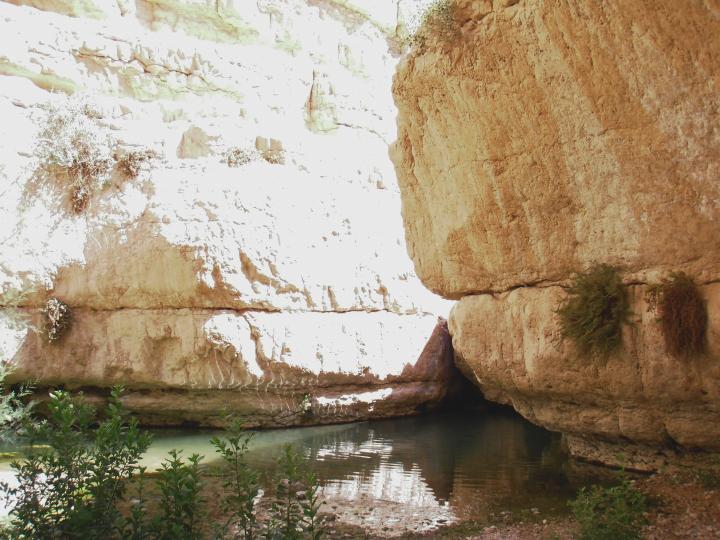 The walk along Nahal Arugot took about 4 hours, with several stops to dip into the water such as in the pool seen in the photo below. 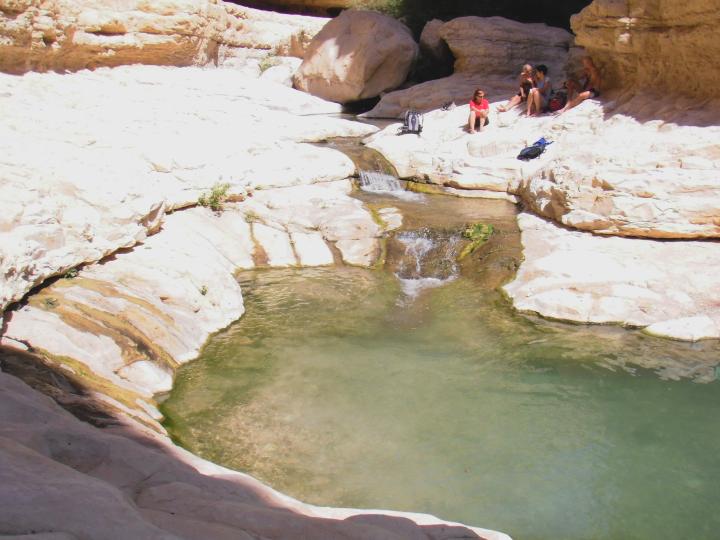 The photo below shows another view of the canyon, the running water, and Shachar. 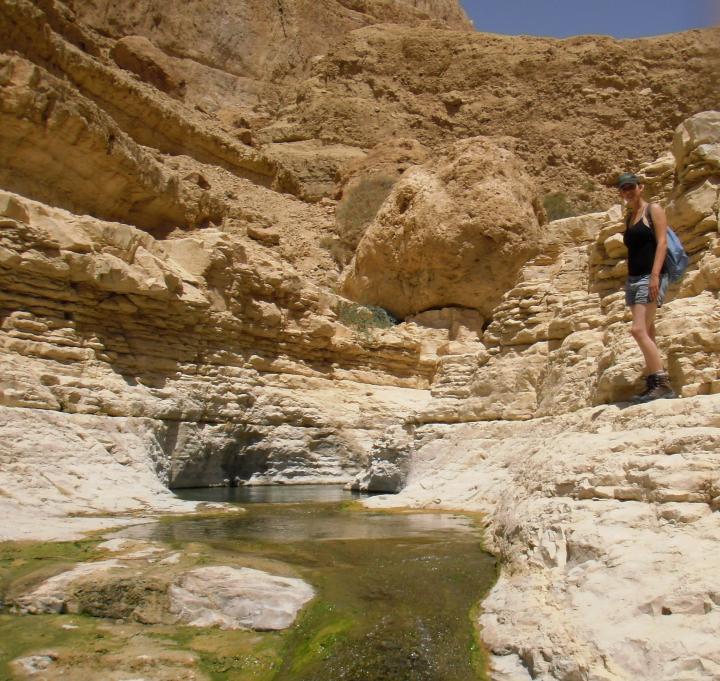 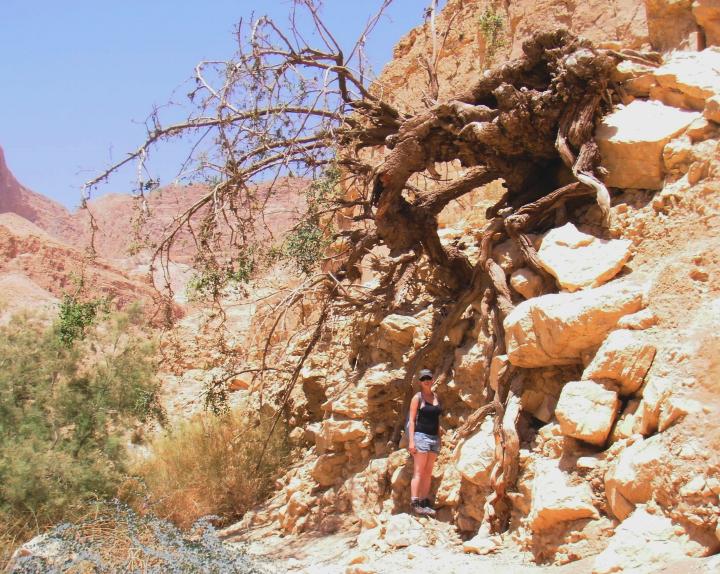 Another photo along the trail shows a hole in the dry weeds. These corners of shadow are always best for resting, hiding away from the heat of the desert. 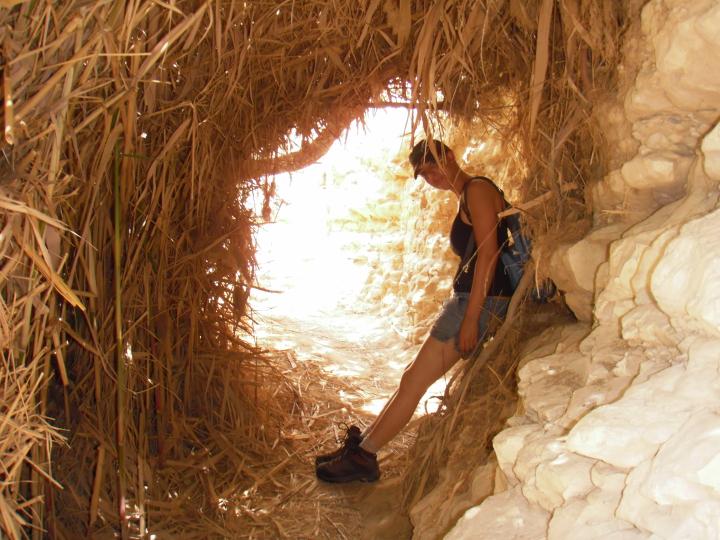 One of the highlights of the hike along the canyon is a unique and picturesque water falls, which ends in a shallow pool. It is called the “hidden falls” (“Mapal Nistar”). 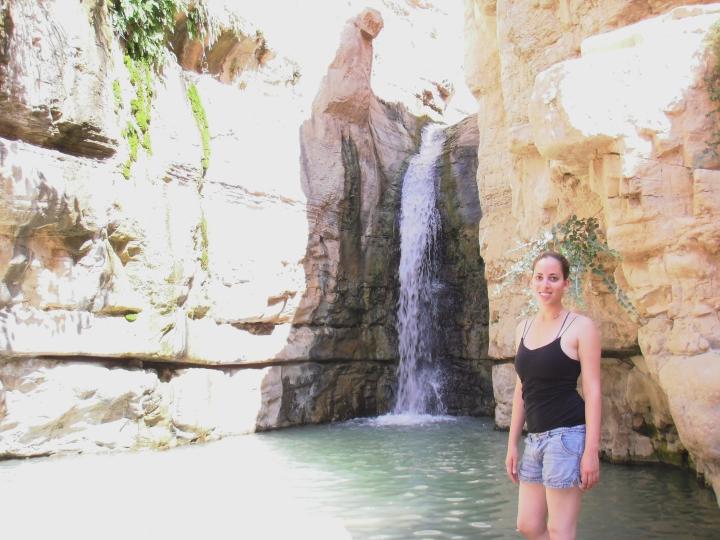 The Hebrew name in this verse is “Arugot” and translated to “beds”.

“My beloved is gone down into his garden, to the beds of spices, to feed in the gardens, and to gather lilies”.

Ein-Gedi was the place where David hid while being pursued by King Saul.

“And David went up from thence, and dwelt in strong holds at Engedi”.