A Jewish village of the first and second temple and the Roman/Byzantine periods, with ruins of a synagogue.

Kefar Naburiya (Nevoraya, Kh. e-Nabratein, Nebratein) is a ruined Jewish village of the first and second temple and the Roman/Byzantine periods. The site is located in the Biriya forest 4km north of Zefat (Safed), above the southern bank of Nahal Dalton stream.

A Byzantine period synagogue was unearthed, which was built on an earlier Roman period synagogue. An industrial area surrounds the synagogue, where wine and oil were produced and exported.

In Kefar Naburiya are tombs of Jacob of Naburaya, a Haggadist before he embraced Christianity, as well as that of rabbi Eleazar of Modi’im. The spring of Naburiya flows in the valley east of the settlement.

This aerial map indicates the major points of interest around the site. The ruins are located on the side of a KKL forest road. 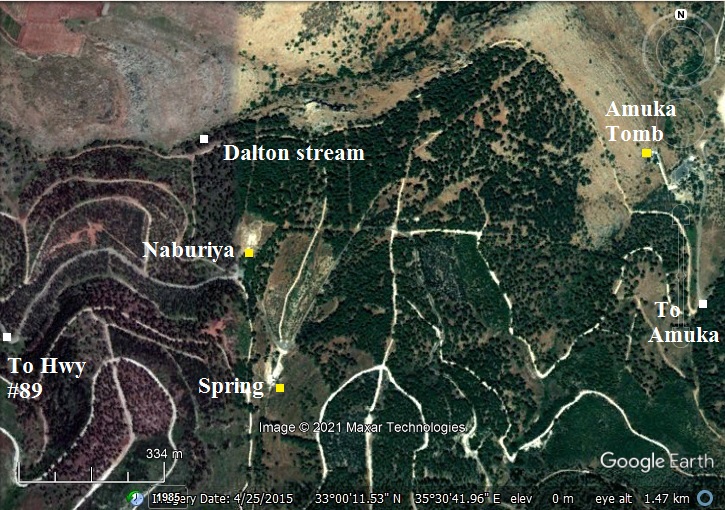 The village was established during the Iron Age, based on the ceramic survey.

The village reached its peak during the late Byzantine period.

Ruins of a 6th century synagogue stands over an earlier 1st or 2nd century AD synagogue, one of the earliest in the Galilee. It was enlarged in the 3th century, but toppled by the 363 earthquake or due to the Gallus revolt (351-352). The community rebuilt the synagogue in 564, and inscribed the date on the central doorpost (marking 494 years after the destruction of the Temple in Jerusalem).

The Talmud  refers to several prominent rabbinate scholars that lived in Naburiya during the 1st/2nd century AD. For example:

According to tradition, the tombs of Jacob and Eleazar are located 200m west of the site.

Note that the name of the village is spelled by the scripts in different forms – Nevoraya, Nibboraya, Nevurya…

A village, Nebratein, was established south of the area of the synagogue, on a higher hill. The synagogue continued to serve the community up to ~700 AD.

Conder and Kitchener surveyed this area during the PEF Survey of Western Palestine (SWP) in 1873. A section of the survey’s map, part of Sheet 4, is shown here. Kh. en Nebratein with it synagogue are marked in the middle of this section. 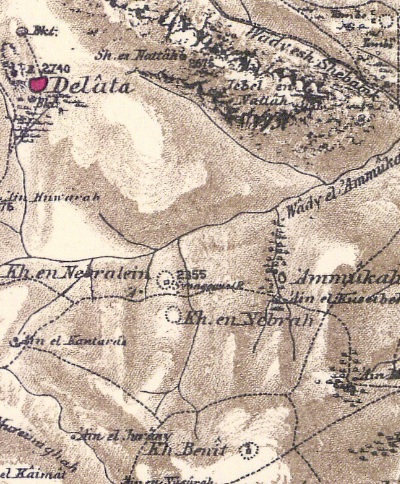 “Kh. en Nebratein (P e).—Here are the remains of a synagogue, completely leveled to the ground. There are fallen columns and the lintel of the main entrance, which bears an inscription in Hebrew and a representation of the seven-branched candlestick. This lintel measures 9 feet long x 2’1″ x 2’1″, and is moulded similarly to those in other synagogues. The top of the lintel is decorated with a wreath of leaves, boldly sculptured, instead of the vine with grapes seen at Kefr Bir’im. The candlestick is in the centre of the lintel, and is in high relief. On the base of one of the columns a hare is roughly sculptured”.

“The total length of the building appears to have been 67 feet, with a width of 57′ 6″. There are no capitals remaining. The diameters of the pedestals vary : they are 1′ 7″ to 2′ and 3″. The diameter of the base of the columns was 2′ 2″. An attached square pilaster was observed, with ordinary moulded capital, which probably decorated the exterior. The inscription is not legible at the beginning”.

“This place was discovered in 1866 by Captain Wilson, who found the synagogue with the Hebrew inscription, and the representation of the candlestick with seven branches. He took a squeeze [BW: a method of copying an inscription on paper] of the inscription. A squeeze was also taken for Renan in 1860, but it proved illegible. He says (Letter IV.) : ‘ From Tiberias we turned north again to complete the examination of the Jarmuk district, and at some ruins called Nebratein discovered an old synagogue, on the lintel of which was an inscription in Hebrew, and over it a representation of the candlestick with seven branches, similar to the well-known one on Titus’s arch at Rome.’

The place is often mentioned by the Jewish pilgrims. Immediately above, and to the west of this spring, rises a hill covered with ruins. Here were fragments of columns of different diameters, mixed with materials of all kinds and sizes, belonging to buildings now destroyed. Other trunks of columns and good cut-stones were lying close to a lime-kiln, about to be calcined.
‘ North of the hill, and separated from it by a road, is a second hill, of greater extent, but lower than the preceding, also covered with ruins. Surrounded on the N.E. and W by ravines, successive terraces have been constructed upon it, supported by high walls. On the upper platform we remarked the remains of an ancient synagogue. This edifice, lying north  and south, as in nearly all the monuments of this kind in Palestine, measured 27 paces long by 18 broad. It was divided into three naves, and was ornamented within by ten stone columns, five on each side, which are now broken in pieces ; they were crowned by Corinthian columns. On the base of one column is an animal with long ears, tolerably well sculptured, but mutilated : probably it is a hare. Where was the great door two splendid blocks are lying on the ground ; one was the jamb and the other the lintel ; the second jamb is broken. In the middle of the lintel, which measures 9 feet 4 inches long, and is decorated by mouldings a crossettes, is figured the seven-branched candlestick, surrounded by a wreath.
It separates into two equal parts a Hebrew inscription, engraved in relief in a single line. I attempted to take a squeeze of this, but owing to a high wind succeeded imperfectly. I found no traces of the side doors. Beside these ancient synagogues, I distinguished the vestiges of another building also entirely overthrown.’—Gue’rin”.

Excavations were conducted by Heinrich Kohl and Carl Watzinger (in 1905); Eric and Carol Meyers (1980/). They excavated in the area of the synagogue, the area south and southwest of it, and along the western edge of the village.

The site is located in a public open area. Access to the site is either from Highway #89 on the west or highway #90 on the east.

Naburiya is located on a hill above the south bank of Nahal Dalton. It flows to the Huleh valley. The Golan mountains and Mt. Hermon are seen in the far background.

The area is covered by pine trees and bush. Forestation by the KKL transformed the landscape from a dry area to a green forest. 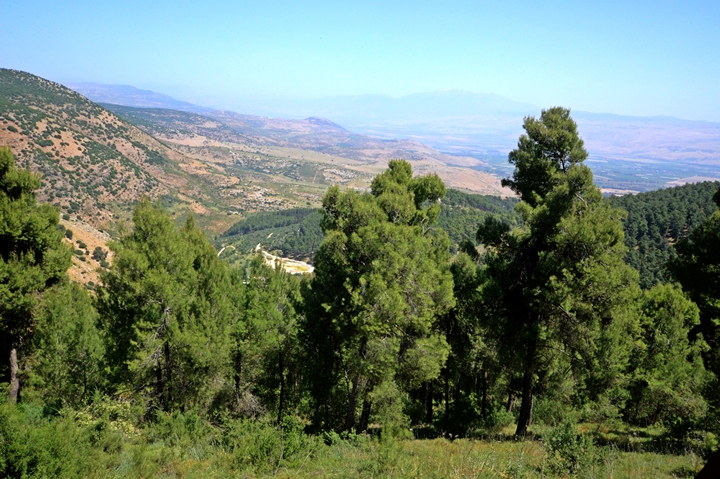 The ruins of Naburiya are located on a hill. The visible ruins are located around the synagogue. From the parking place is a short walk to the ruin. 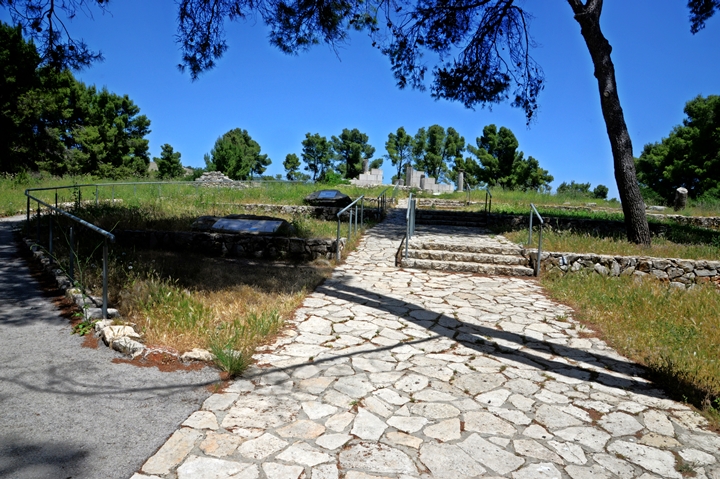 The synagogue faces the south, oriented to Jerusalem. Entrances are on the south and north sides. 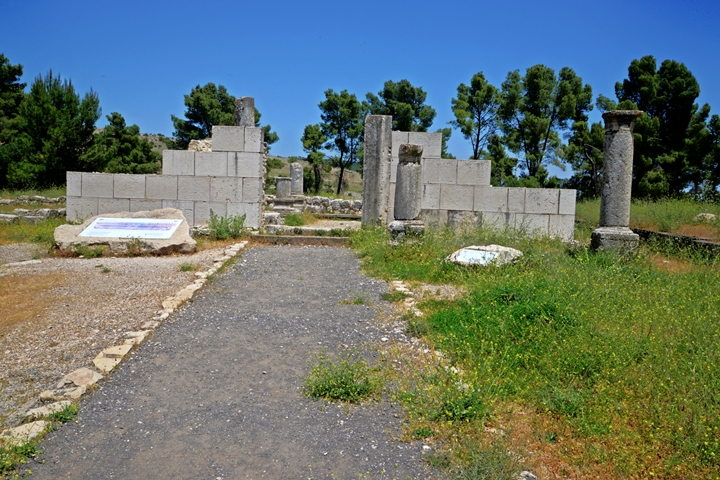 A drone captured this view above the southern side of the synagogue. 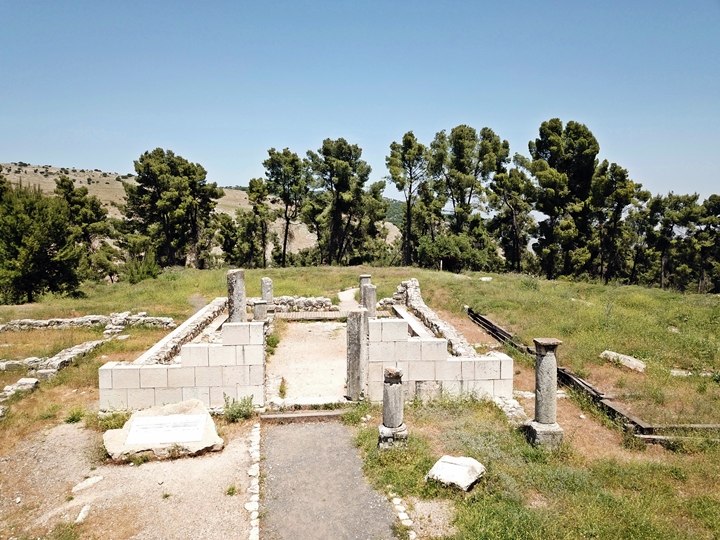 A reverse view from the north side is next.

The synagogue was built in 3 phases: 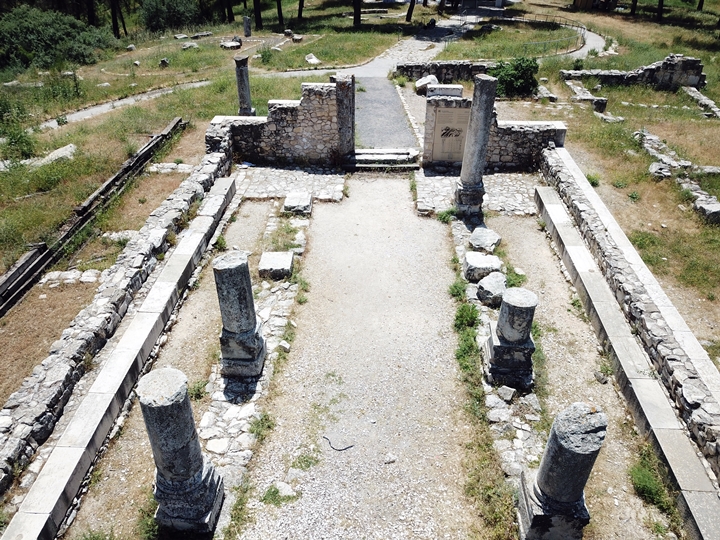 The current synagogue has a basilica plan with two rows of four columns, and benches along three sides. Its current dimensions are  16.90m x 11.60m. 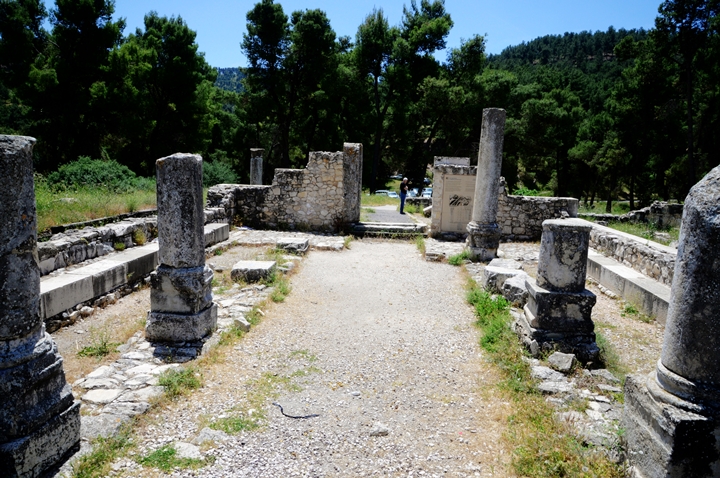 A wooden Torah Ark was located on the Bamah at the side of the southern western wall, on the right side of the photo below. Oil lamps were hanging from the ceiling, as illustrated on a ceramic bowl found in the excavations around the building. 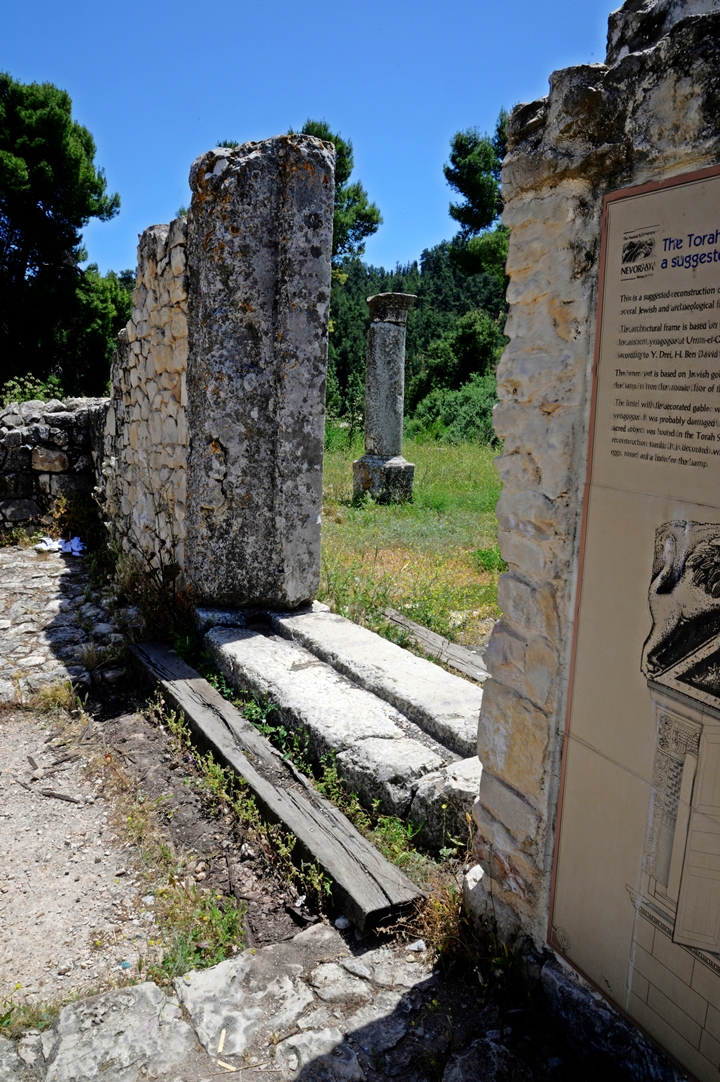 A stylobate was built in the entrance to the synagogue. This extension was added in the second construction phase, at the end of the 3rd century, when the structure was enlarged. 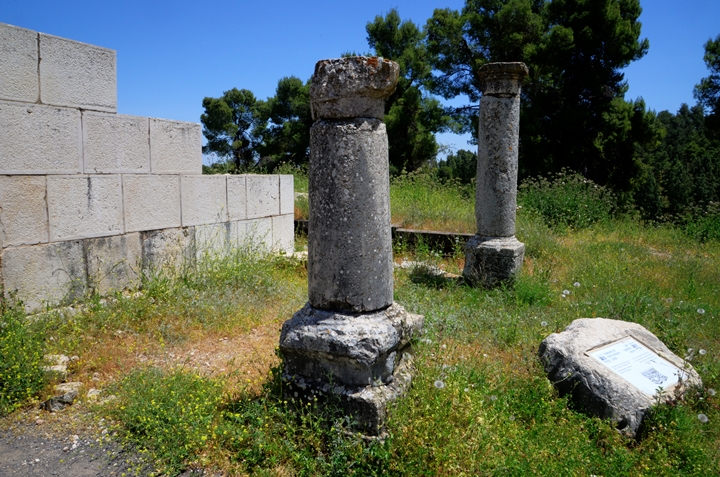 A detail inside the synagogue: the benches along the eastern side. Benches are aligned along all sides except for the southern wall. 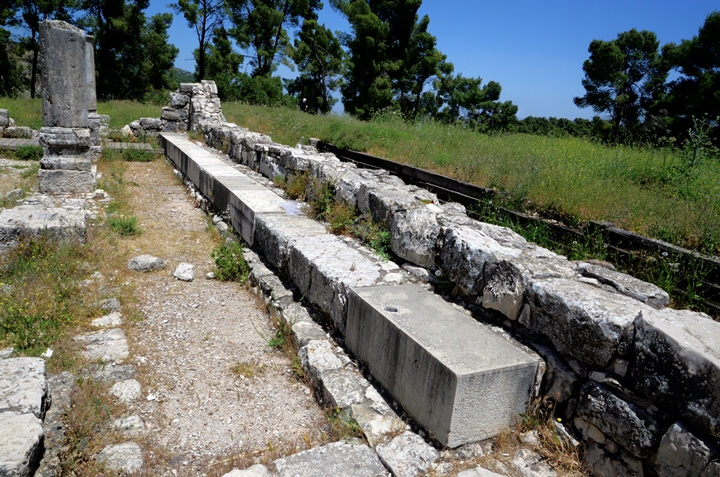 An underground hideaway was found in the cistern to the west of the entrance path. It was prepared during the Bar Kokhbah revolt (132-136), or during the Gallus revolt (351-352). 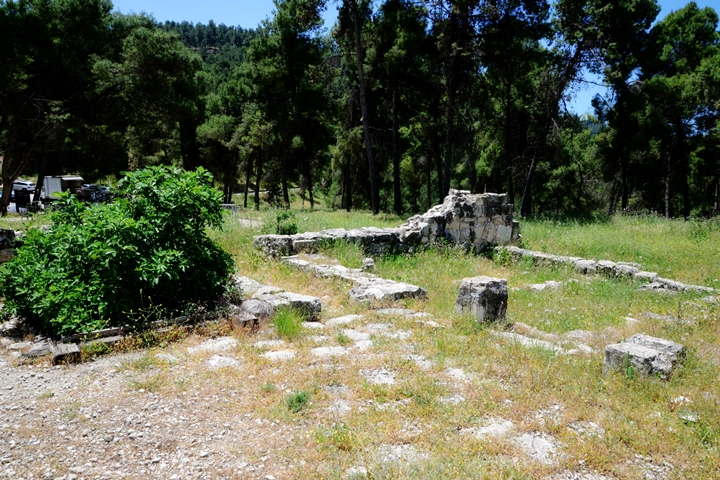 A crushing stone, dated to the Byzantine period, is located on the north east side of the synagogue. It is part of the olive oil production installation. 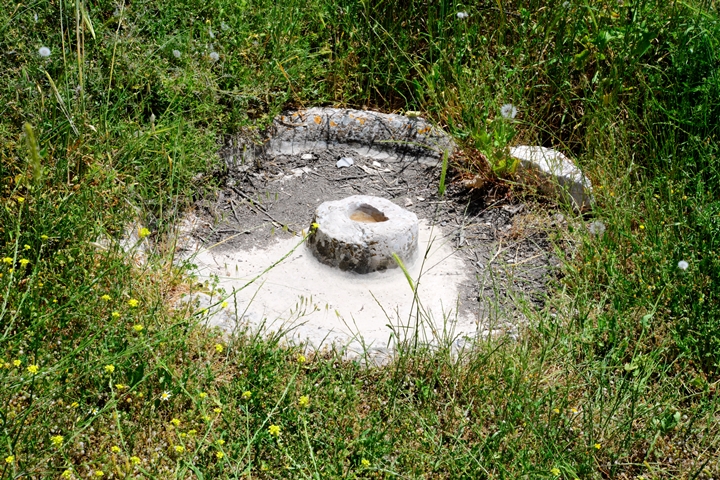 Another view of the synagogue – from the north east side. 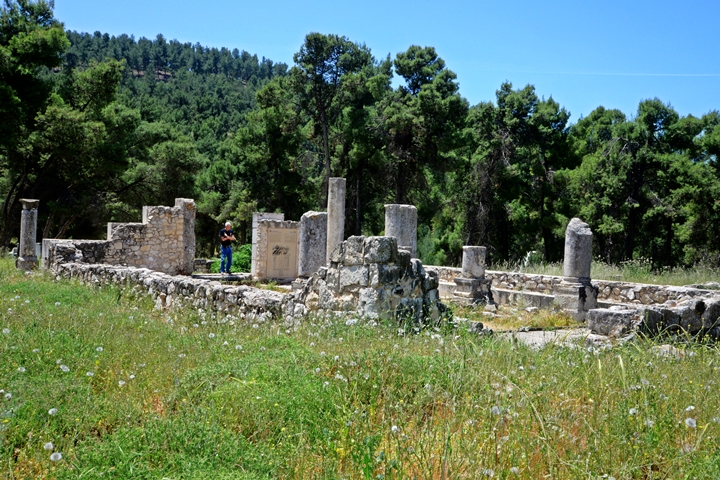 The spring of the village is located in the valley on its east side. 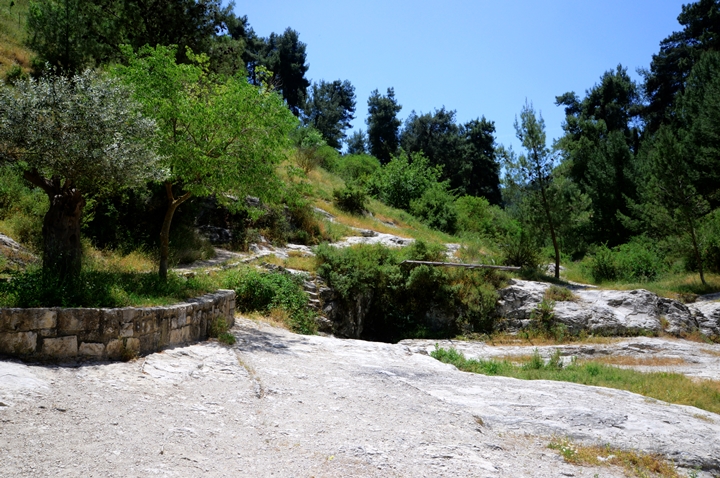 Waters from the spring fill up a small pool near its outlet. Inside the pool are (according to the posted sign) frogs, salamander and newts. However, at the time of the visit they were not visible. 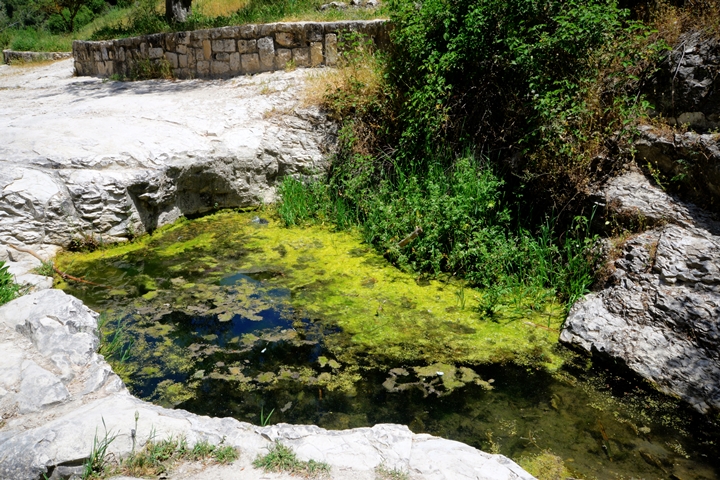 The water was conveyed to installations that were cut on the surface of the rock – water troughs, washing basins, pools. 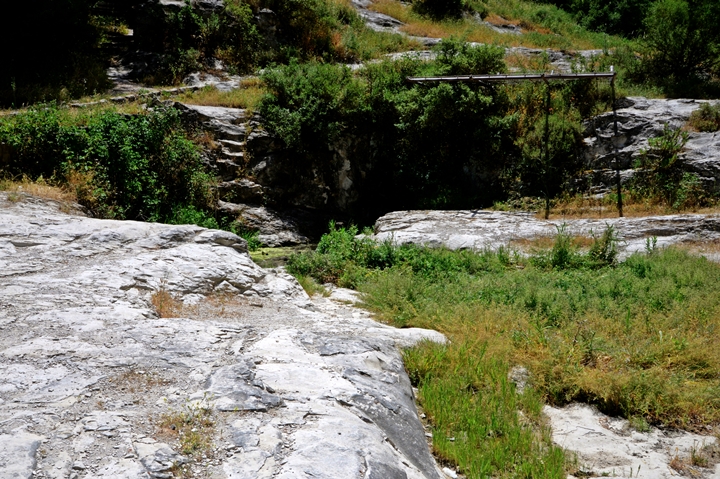 The tomb of Jonathan ben Uzziel is located  1km east of Naburiya, in the area of the ruined Jewish village of Kefar Amiko (ancient Ammuqa). Rabbi Jonathan was one of the 80 rabbinic sages (tanaanim) who studied under  Hillel the Elder during the Early Roman period. 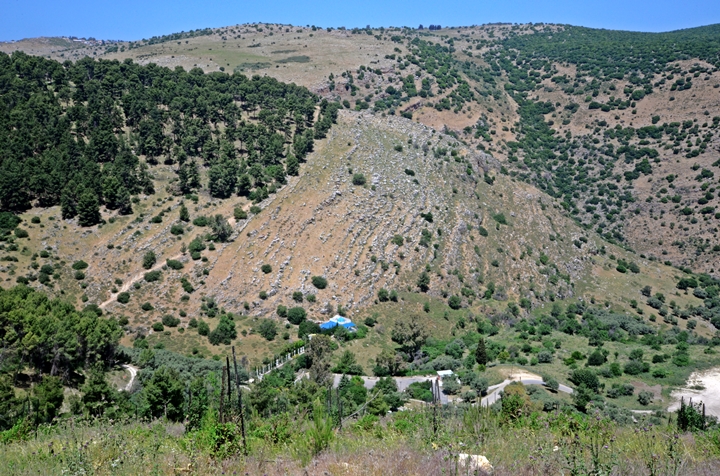 The tradition of the tomb was recorded in the middle ages. The sage is known for bringing family remedies: unmarried visitors pray for a good marriage partner, while families pray for health and happiness for the children.

From the parking place is a walkway to the tomb, arranged in separate entrances for men and women. 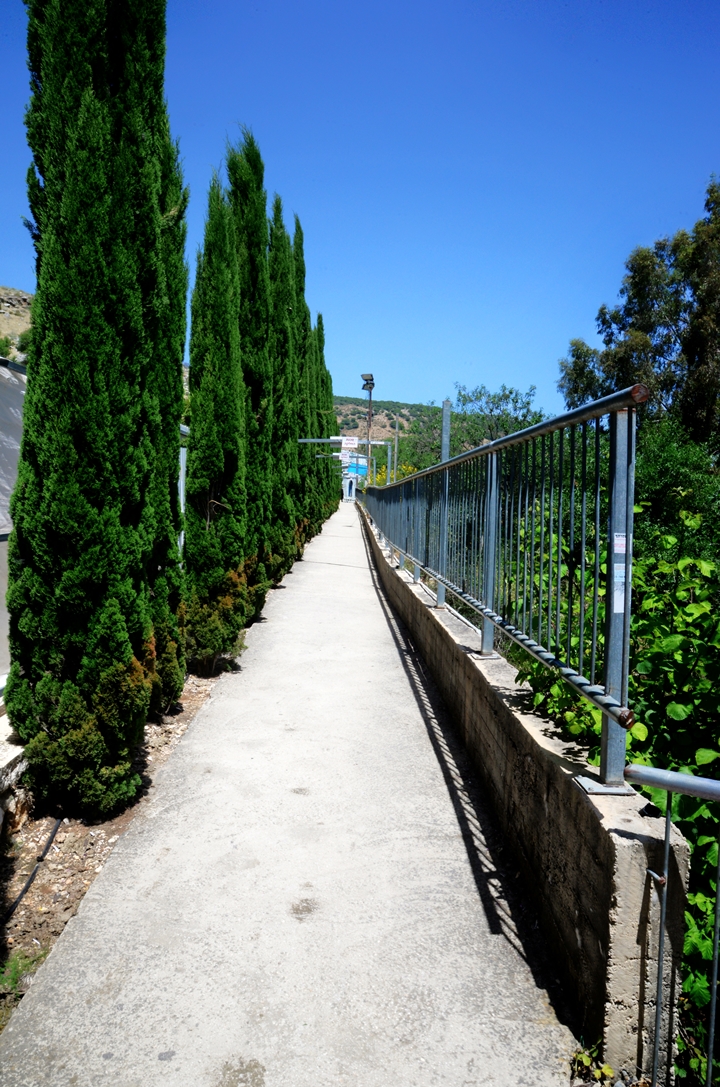 Jews come to visit the tomb throughout the year.

“‘Ammukah – This place was celebrated among the Jews of the Middle Ages as containing the tomb of Jonathan, son of Uzziel the Targumist , the author of the Chaldaic paraphrase of the books of  Joshua, Judges, Samuel, Kings, Chronicles, and the Prophets. Over the tomb was formerly a great tree. The tomb is now gone, but an old tree stands, under which are certain cut stones, on which the Jews who go there write their names”. 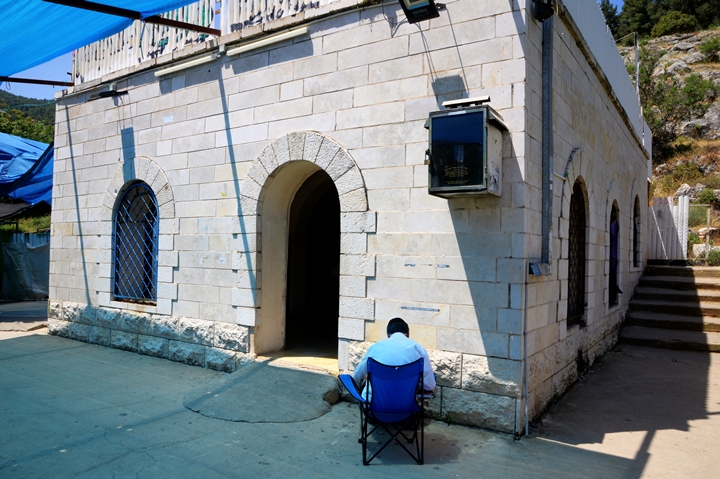 The annual visitation event, that attracts thousands, is on 26 Sivan – the day he died. In 2021 this would be on 6 June. 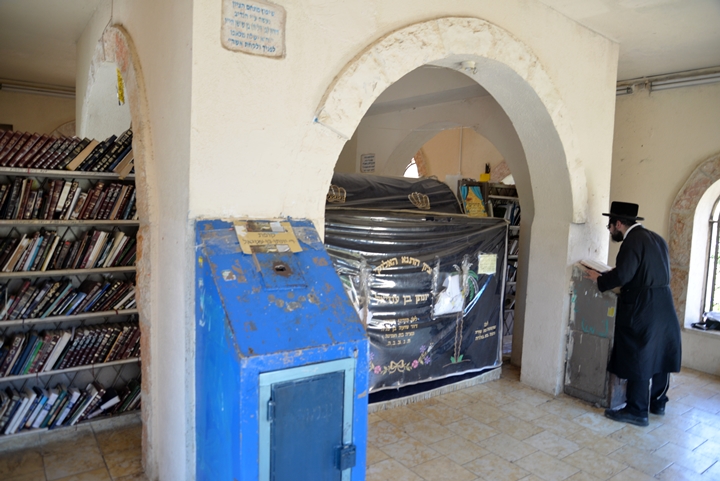 Nearby was the site of a Jewish village. Possible remains of a synagogue where found nearby.

A recommended place to rest, drink and eat is a charming cafe. It is located at the side of the road, 0.5km west of Amuka. From the porch are great views of the Dalton valley, the forest and the Hula valley. 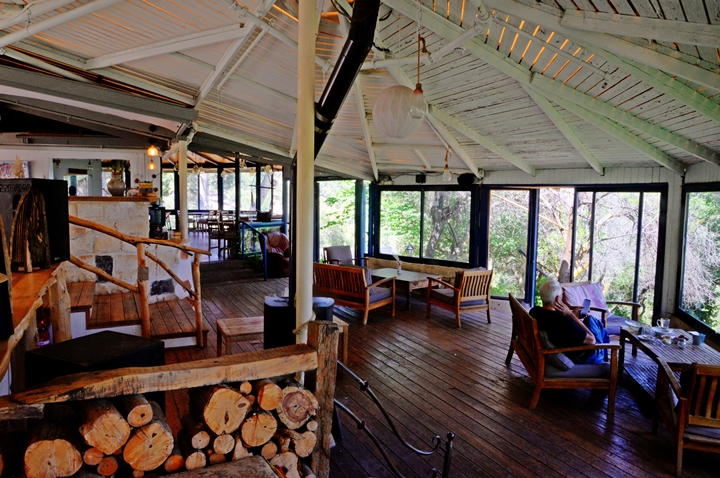