A short exclusive story about Israel’s famous General and his love of the archaeology of Israel.

The article below is an exclusive story told by our Taxi driver friend, Leon. It tells about an incident in 1966 when Leon was stationed in a secret military camp in Israel, and is related to the late General Moshe Dayan. 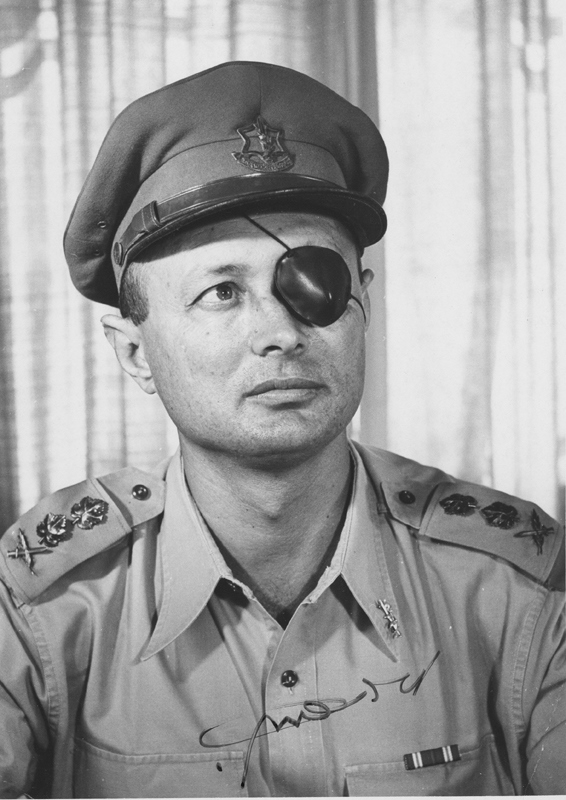 In one of his private expeditions he was nearly killed when a dig collapsed and nearly buried him alive, and was hospitalized for several weeks (1968). Many stories were told of his hobby and the methods he used to acquire the treasures, including this exclusive story.

Leon is a taxi driver with a detailed knowledge and experience in Christian pilgrimage tours in Israel. Leon was then serving as a young soldier in January/February  1967 in a secret military base near Rehovot, a city in the south-central side of Israel.

According to Leon, there were some trenching done in the base in preparations for construction of  underground structures within the base. During these earth works many ancient fragments were discovered in the site, probably from Biblical periods and Philistine sites that are wide spread in this area. In Israel many random digs uncover ancient remains, and apparently rumors of these findings circulated outside of the camp.

One day, Leon passed by the construction site and noticed a civilian busy digging in the trenches, using a pickaxe. He immediately recognized him as the retired chief-of-staff and ex-agriculture minister, since the man was a famous and influential figure in Israel, even before the 6-day war which made him famous Worldwide. At that time Moshe Dayan was a civilian, who recently resigned years before from the government after he felt that prime minister Eshkol lost confidence in him. Moshe came to the camp with his private vehicle, a Saab as he recalls, probably using a permit he held as a retired General that gave him access to all army camps.

Leon was surprised about this activity. After all, what is a civilian doing in a secret army base? He then reported this to the camp’s commander, and asked whether he knew about this presence of Dayan in the camp. To his surprise the commander was not informed about this digging, nor did anyone ever gave him a permit to do so. The soldiers therefore went over to the site of the digging and talked with the man. After checking this issue with him, Dayan was asked to leave the camp.

More than 40 years passed since then, but he vividly remembers how, as a young soldier, he encountered this bizarre incident in his camp.