Mary’s Well is located in the center of the downtown Nazareth, on the main road.  The site is actually a modern water trough, which was built over the ancient trough, which was used by the women and animals as drinking water.

The well gets its water by pipes from a natural spring about 200M north of the well, and was used throughout the ages.  According to the tradition, this was the place where Virgin Mary, Mother of Jesus, was announced by the angel Gabriel that she will have a son of God.

“And she took the pitcher, and went out to fill it with water…”.

In late Roman times, and especially in the Crusader period, a series of tunnels were cut into the rock, and the water was distributed to the houses in the vicinity. This water system was in use throughout the ages.

In 1767 St Gabriel Church  was built nearby (150M up the hill) on top of the ruins of a Crusader period Church. In its ground level there is a flow of water that is connected to Mary’s well by pipes. The Greek Orthodox believe that this is the site of the Annunciation, basing it on earlier texts.

In the 19th century the well-house was rebuilt.  The photos and the drawing below show the site at the end of the 19th Century. 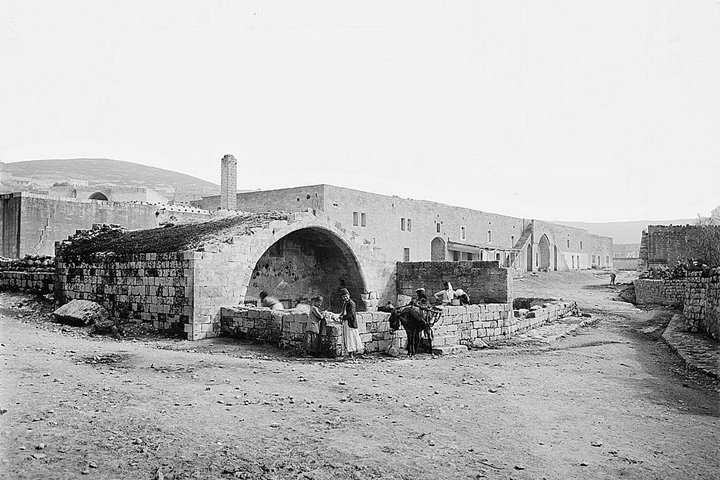 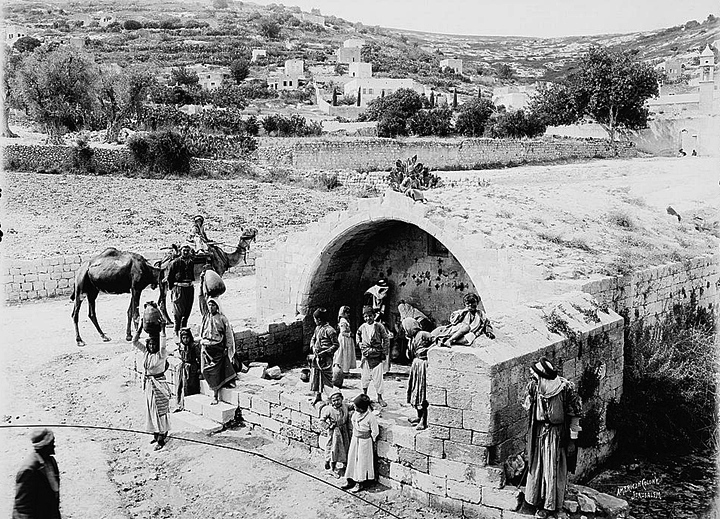 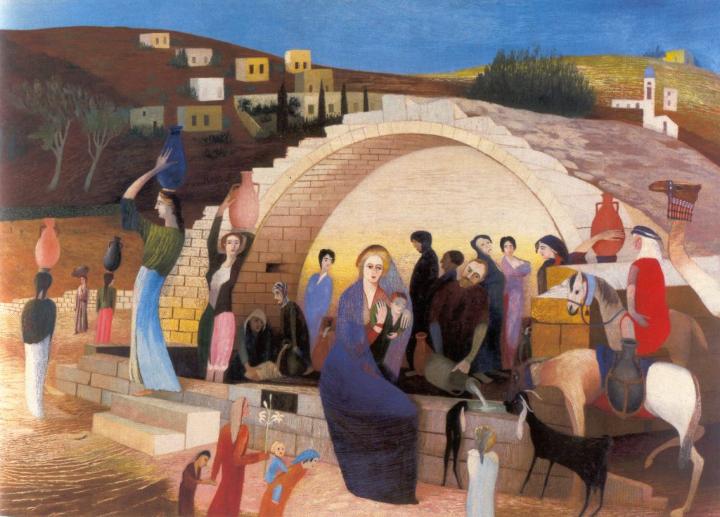 The well house structure was demolished and rebuilt in the 1960s.

You can drive on the main road of downtown Nazareth and stop at the site, which is located at the side of the road.

Mary’s Well structure, seen in the photo below, is a modern water trough. 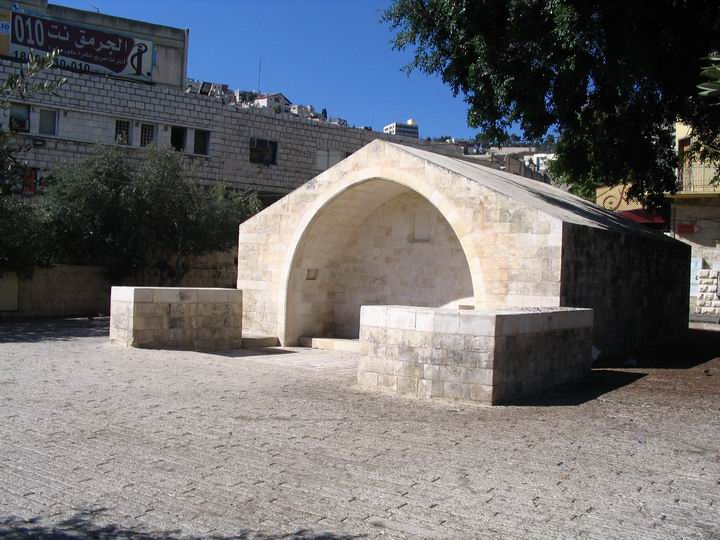 Another view of the well is seen below. 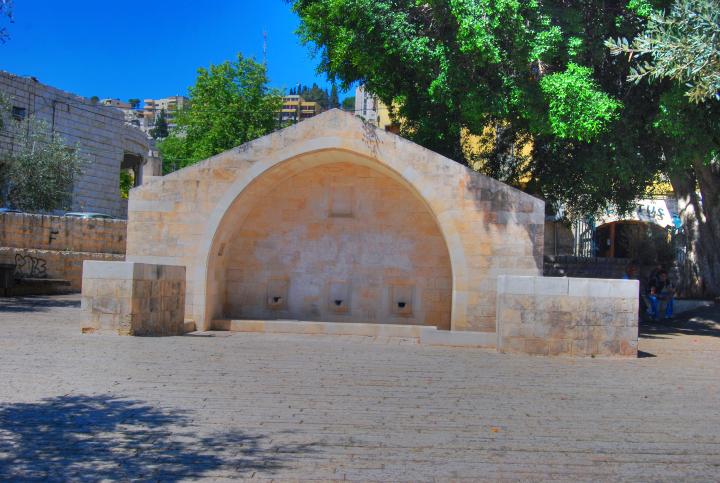 In the rear of the structure, you can see the original old stone canals laid out beneath the structure. This canal brought the water from upstream – St Gabriel’s Church, about 100M away. 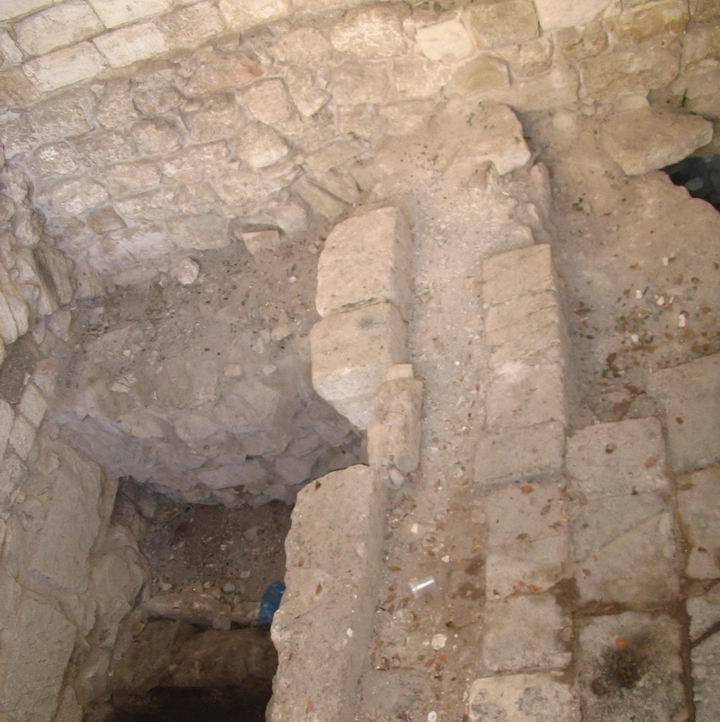 From this place, walk behind the structure and visit St. Gabriel Church.

“And in the sixth month the angel Gabriel was sent from God unto a city of Galilee, named Nazareth, To a virgin espoused to a man whose name was Joseph, of the house of David; and the virgin’s name was Mary.  And the angel came in unto her, and said, Hail, thou that art highly favoured, the Lord is with thee: blessed art thou among women. And when she saw him, she was troubled at his saying, and cast in her mind what manner of salutation this should be. And the angel said unto her, Fear not, Mary: for thou hast found favour with God.  And, behold, thou shalt conceive in thy womb, and bring forth a son, and shalt call his name JESUS. He shall be great, and shall be called the Son of the Highest: and the Lord God shall give unto him the throne of his father David:  And he shall reign over the house of Jacob for ever; and of his kingdom there shall be no end. Then said Mary unto the angel, How shall this be, seeing I know not a man? And the angel answered and said unto her, The Holy Ghost shall come upon thee, and the power of the Highest shall overshadow thee: therefore also that holy thing which shall be born of thee shall be called the Son of God. And, behold, thy cousin Elisabeth, she hath also conceived a son in her old age: and this is the sixth month with her, who was called barren.  For with God nothing shall be impossible. And Mary said, Behold the handmaid of the Lord; be it unto me according to thy word. And the angel departed from her”.

Note that the well or spring is not mentioned in this text.

This text tells the story of the annunciation – the place where Mary fetched water: 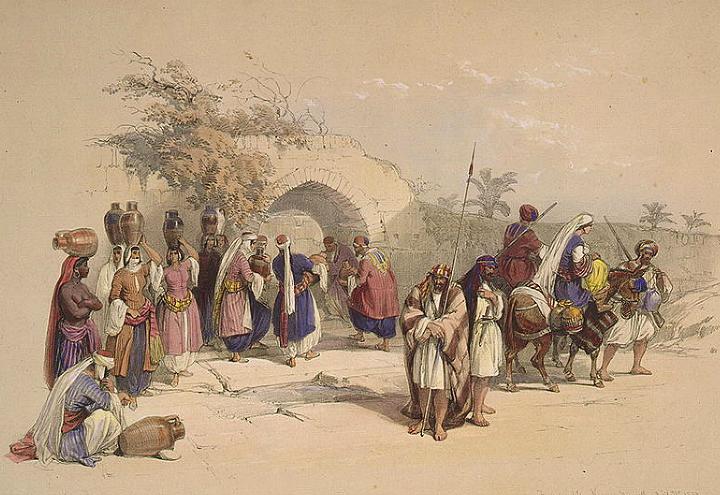 Illustration of Mary’s well, by David Roberts, 1839   Library of Congress

This page was last updated on June 25, 2015 (Added Tivadar drawing)