An archaeological site in Negev Highland area, with 17 water cisterns.

Loz Cisterns is an archaeological site in Negev Highland area. In this area, north west of Makhtesh Ramon, are 17 ancient water cisterns.  They are dated to the Israelite period, perhaps constructed during the times of King Solomon or King Uzziah.

The site is located on a remote area close to the border with Egypt, which is only 5km to the west. This dry desert area is located at an average altitude of 950m above sea level.

It is 2km north west of Mt. Ramon (1033m altitude), at the western side of the geological crater Makhtesh Ramon.

Getting there: A dirt road leads from road #171 to the camping center. After parking the car, there are walking paths that pass through most of the cisterns and other interest points. They are spread over an area of 2 square KM. 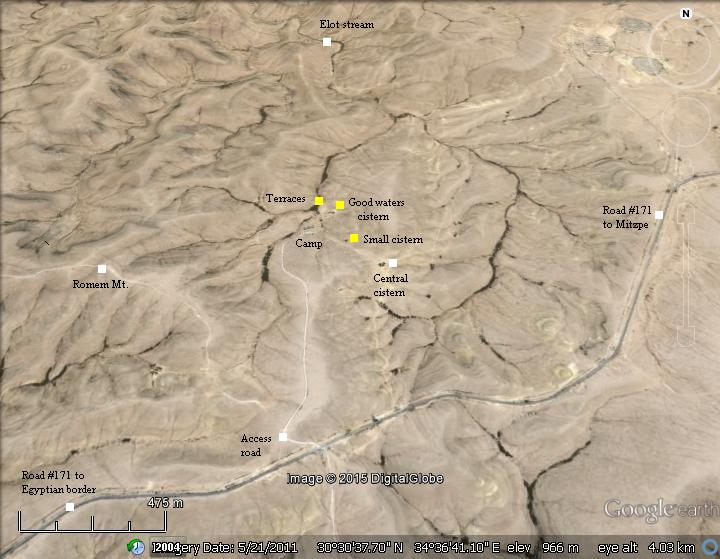 The first settlement in the area started at ~10,000 BC during the end of the Epi-Paleolithic (“After the old stone age”) and the beginning of the Neolithic (“New stone-age”) period.  Flint stones and ceramics, dated to these periods,  were found in the structures in this area.

During the Israelite period, in the 10th-8th century BC, new farming villages were built here.  The majority of the findings in the structures around the cisterns were dated to the Iron Age I and II.

The Loz nature reserve (Hebrew: “Borot Lotz”) is open to the public. A camping site with overnight stay permit is located on the west side of the cluster of cisterns.

In the area named Lotz cisterns are 17 rock-hewn cisterns, half of them are filled with water after winter rains. One of them is named “small cistern”,  located 100m south east of the camping site. 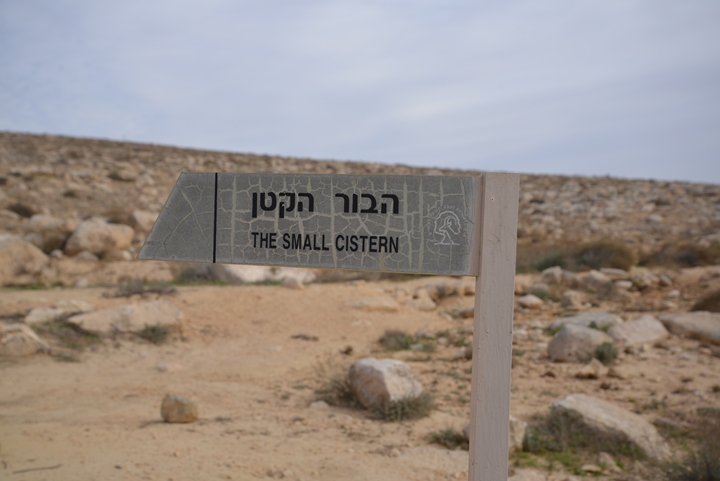 A view from the north side is seen here. It fills up after the rare rainy days, and we were lucky to be here just a few days after the rain. 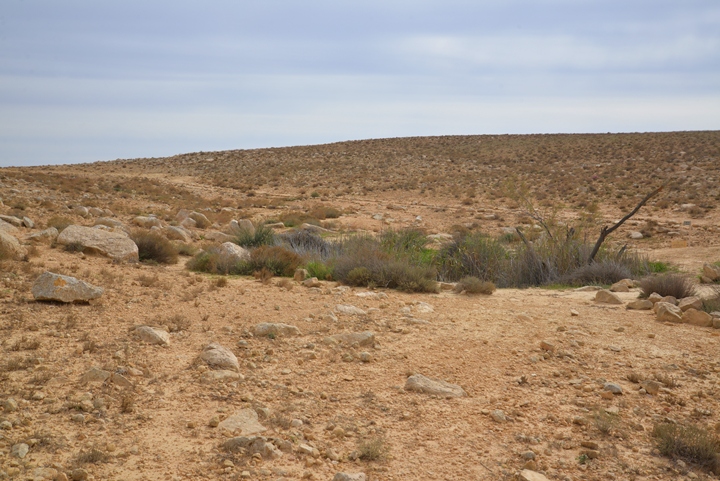 The small cistern has a round shape, 5m in diameter, and 2m deep.  A view from a drone, above its south west side, is seen in the next photo. 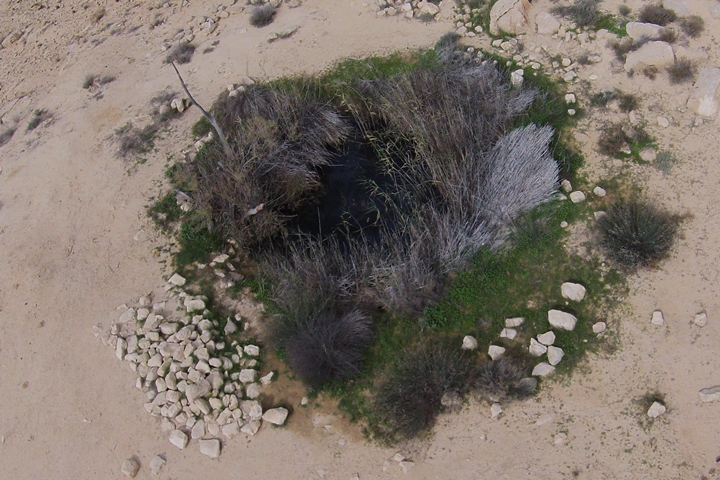 The next photo shows the area around the cistern. A conduit feeds the cistern from the north side. 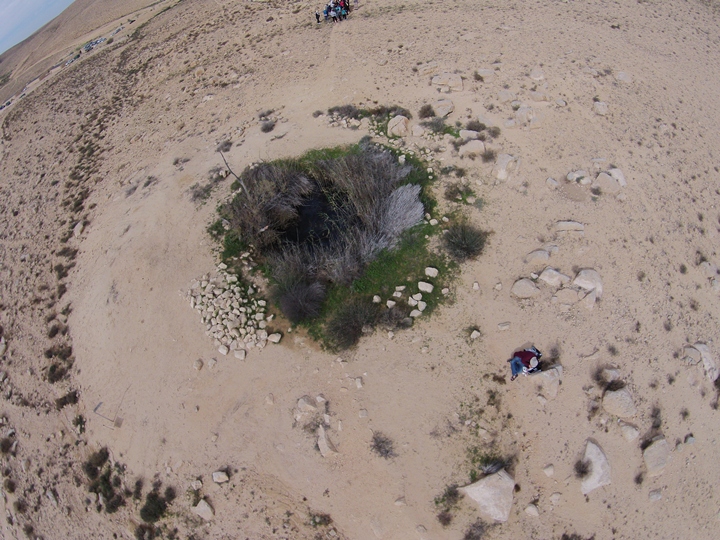 Close to the camping center, 270m north of the small cistern, is a larger open cistern. It is  named “the good waters” cistern, and has an oval plan, 7m by 10m. It is dug 3m deep into the ground, and is lined with rough hewn stones. 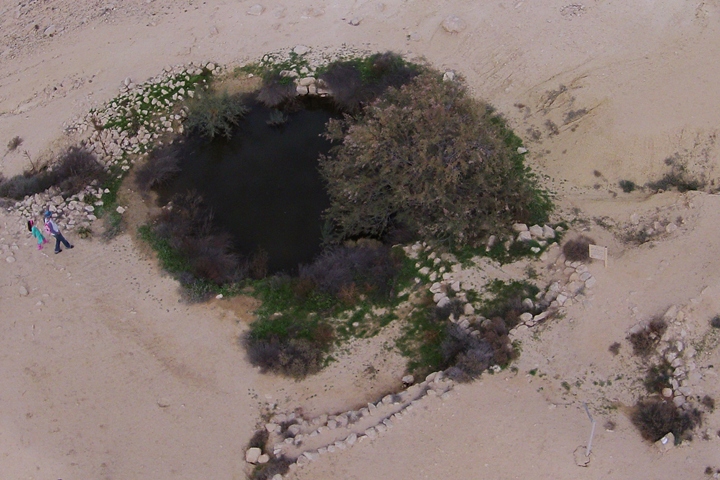 Two conduits feed into the “good waters” cistern. One from the north, seen in the following photo on the upper right side. The other conduit from the south side (the bottom of the photo) bringing runoff waters from the small cistern.

At the mouth of each conduit is a sedimentation basin – a settling pond built to capture the soil washed off during rain storms, in order to protect the water reservoir. The soil settles into the pond before discharging into the cistern. 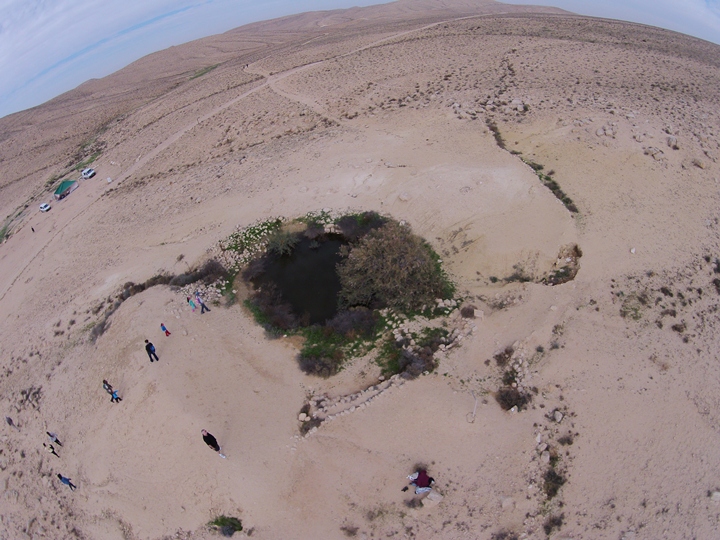 A ground view of the north conduit, conveying runoff waters from the “small cistern”, can be seen in the following photo. 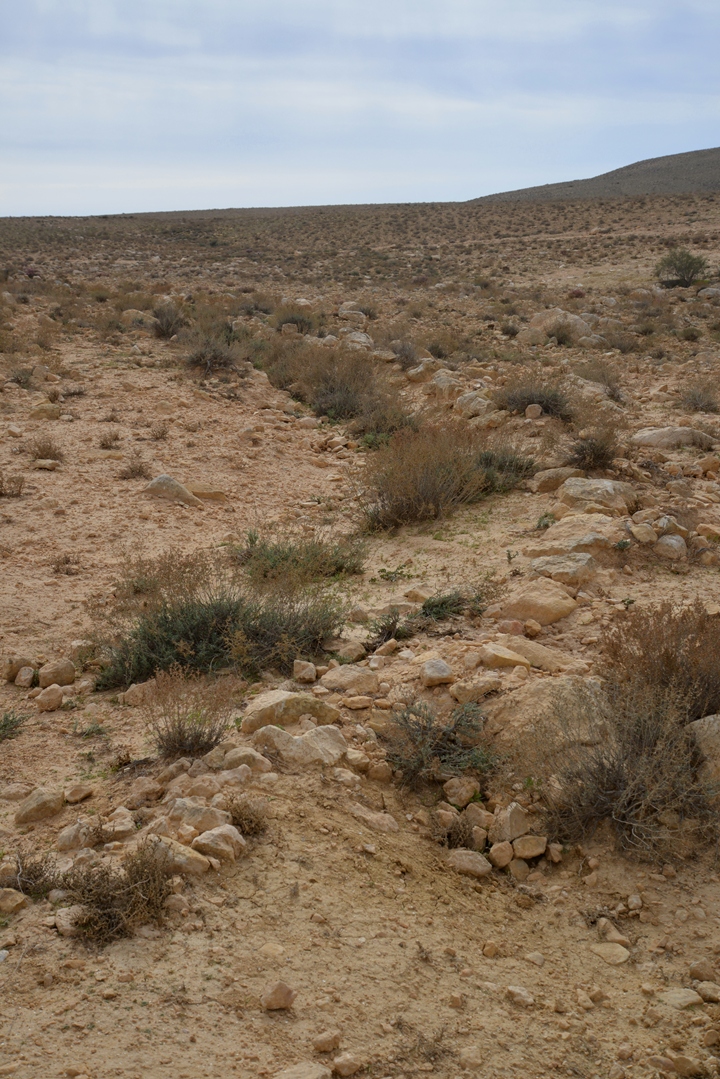 The next photo shows the cistern from the west side. 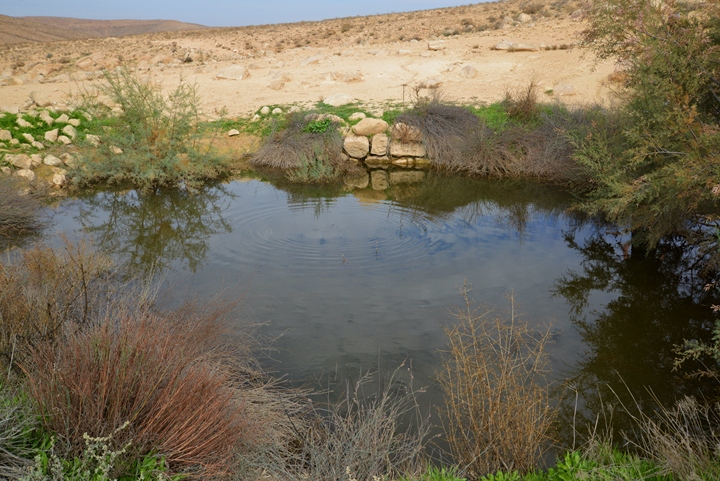 Another view of the “good waters” cistern: 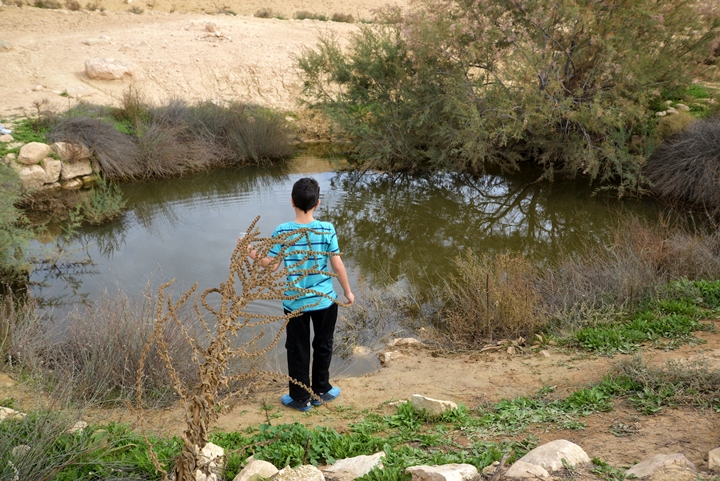 In the valley near the camping center, along the tributary of Nahal Elot, are remains of ancient terraces, perhaps dated to the Roman and Byzantine period.

During the Roman and Byzantine periods the Nabateans mastered the knowledge of collecting scarce desert water and using it for farming. They supplied fresh vegetables and fruits to the Nabatean cities, such as  Nitzana, and to the army garrison stationed along the frontier. This desert farming started in the end of the 1st Century AD and lasted until the 8th Century. 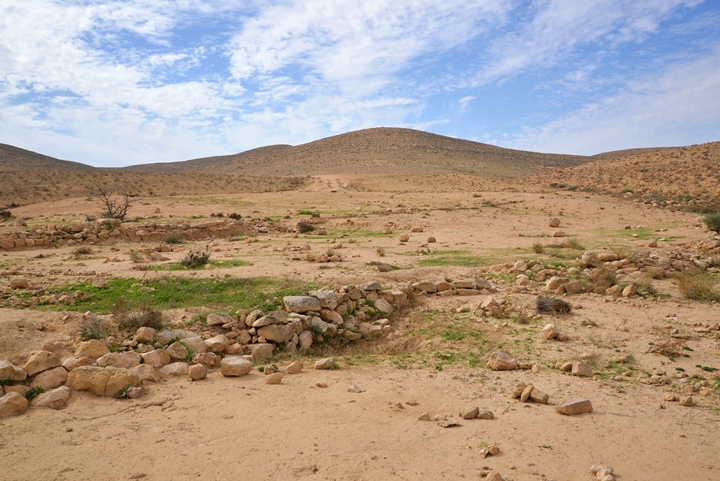 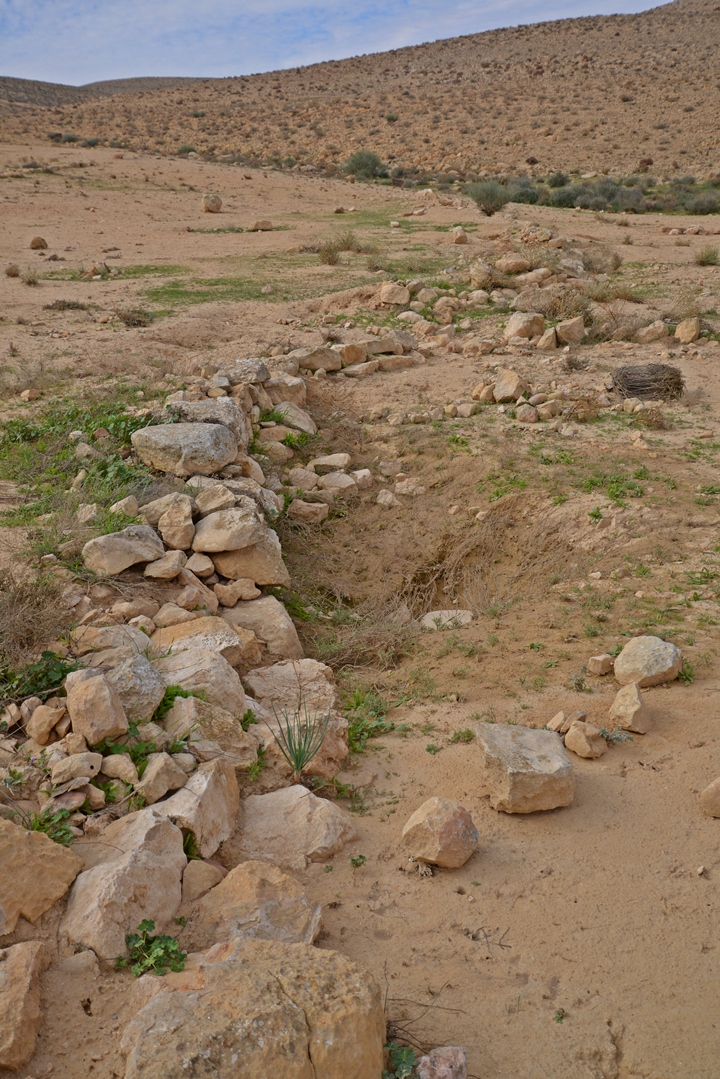 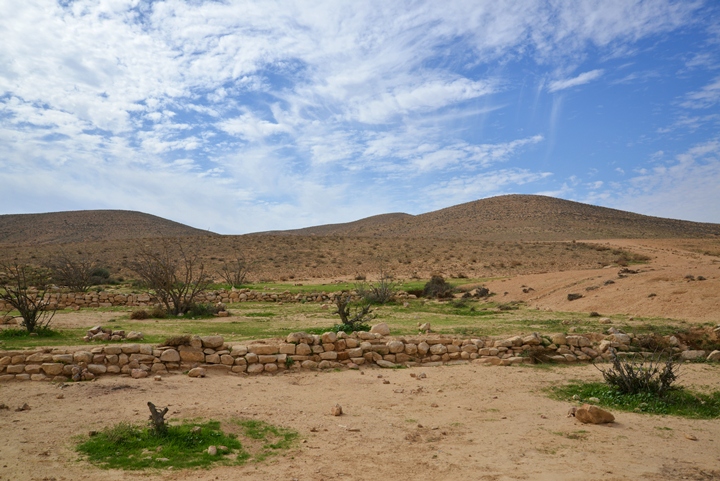 There were relatively heavy rains in the area during the month of November 2015, filling up the cisterns and accumulating in the valleys, resulting in the green patches seen in these photos.

A few days after the rain storm,  a mushroom pops up out of the soil. This is an unusual view in the dry desert area. 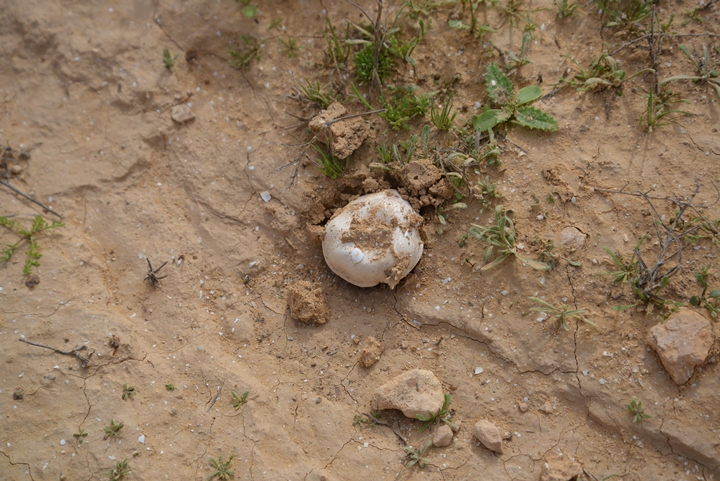 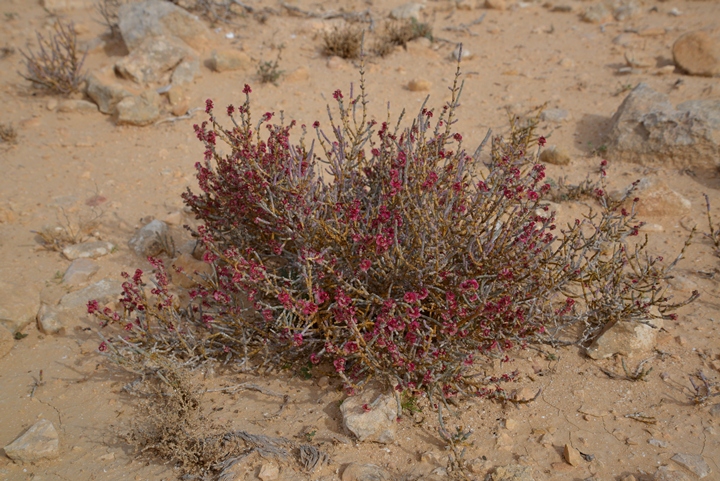