Ancient Katzrin is a restored Byzantine period village in the central Golan area.  This unique archaeological park provides a complete picture of the everyday life in a  typical Jewish village at these times, also known as the Talmudic period. The park is located near the modern city of Katzrin – the main Jewish city of the Golan.

Katzrin is 350m above sea level, 17KM west of the border with Syria.

The archaeological site is located to the west side of the industrial park, east of the modern city of Katzrin. Parking places are available in front of the visitor center. 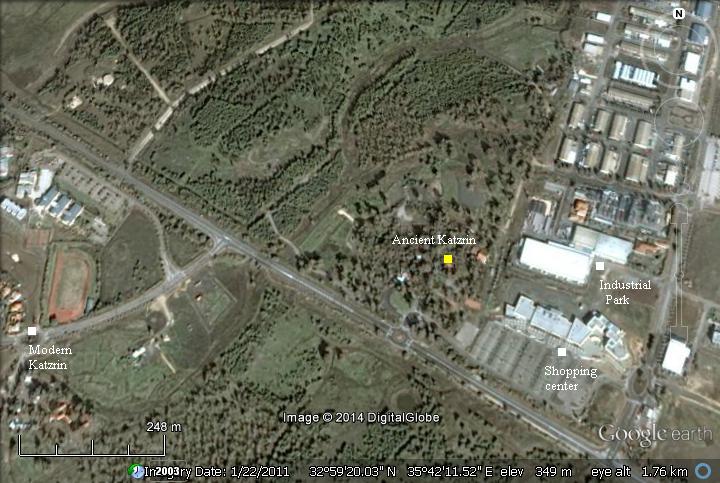 The central area of the Golan heights witnessed a dramatic increase in the number of Jewish villages during the end of the 1st century BC, at the times of King Herod, from virtually none – to 20 or more villages. The reason was due the fact that after receiving the area from Augustus Caesar, Herod relocated Jewish settlers to this area in order to populate his new territories. This site was one of the Jewish villages that were established at this time. Other villages are located at a close proximity.

Katzrin flourished during this times, known as the Talmudic (Byzantine) period.

The village was destroyed by the massive earthquake of 749 (with >7 magnitude) that destroyed many of the sites in the Galilee and the Golan.

The village remained uninhabited for 500 years. During the Mameluke period (14th Century) a mosque was erected at the site of the synagogue, and the village was inhabited again for several hundred years.

The village was deserted in 1967, following the six day war. A modern city, Katzrin, was established west of the ancient site in 1977. In 1981 the Golan was annexed officially by Israel, and so Katzrin became an Israeli district town.  In 2012 there were 8000 residents in Katzrin, and the city is planned for 25,000 inhabitants.

The synagogue was discovered in 1976 during the archaeological survey of the Golan, headed by Shmarya Guttmann, who also excavated Gamla. The site was excavated starting in 1982, directed by Z.Ma’oz  and A. Killebrow of the IAA, followed by restorations directed by L. Belkin and a crew of workmen led by H. Hasoon. The present area covers only 10% of the total size of the ancient village.

Many of the findings from the excavations in ancient Katzrin and other archaeological excavations in the Golan are on display in the museum of modern city of Katzrin. In the visitors center you can purchase a combination ticket which also includes an entrance to the museum.

The path from the entrance to the ruins of the ancient village passes through two stone houses built during that time, and were abandoned in 1967 after the 6-day war.

During the 19th-20th century AD (Ottoman period) new Arab settlers resettled in the site. They reused the hewn stones and architectural elements from the ancient villages in order to build or rebuild their new houses. 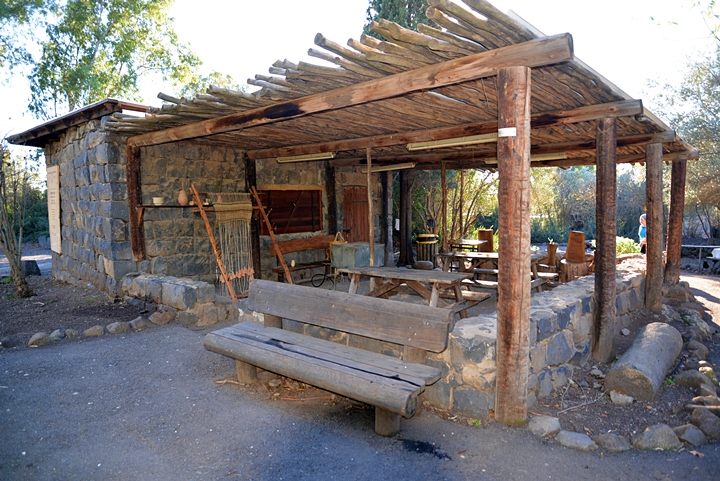 The path leads to a partially restored house named the “Uzi’s house”, which is built along the eastern wall of the synagogue. It is constructed of hewn basalt stones, as all of the buildings in the Golan. Mortar bonds the stones together. Large hewn stones were laid at the corners of the structure in order to better support the construction. 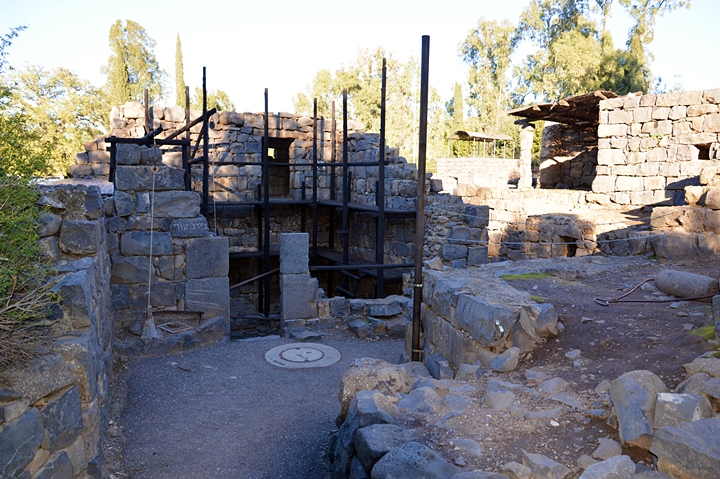 The scaffolding along the walls demonstrates the methods of constructing the houses.

The house is named after a stone mason or carpenter by the name of Uzi, which means means power or strength. His name was inscribed with Aramaic letters on a stone found in the excavations. 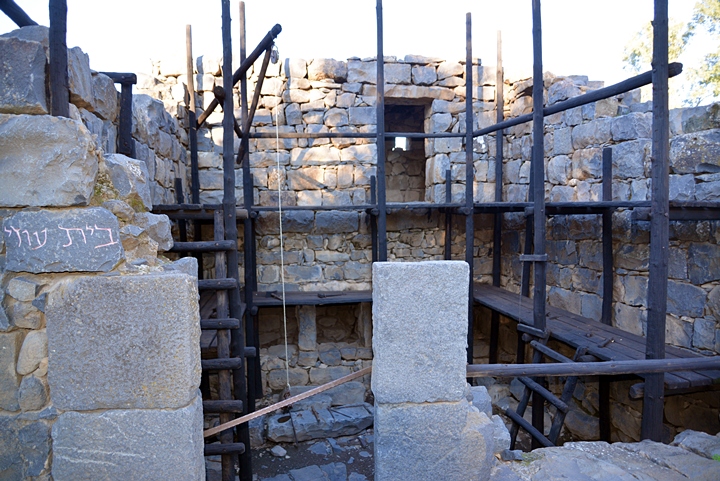 On the back side of the house, adjacent to the synagogue, steps led to the second story. 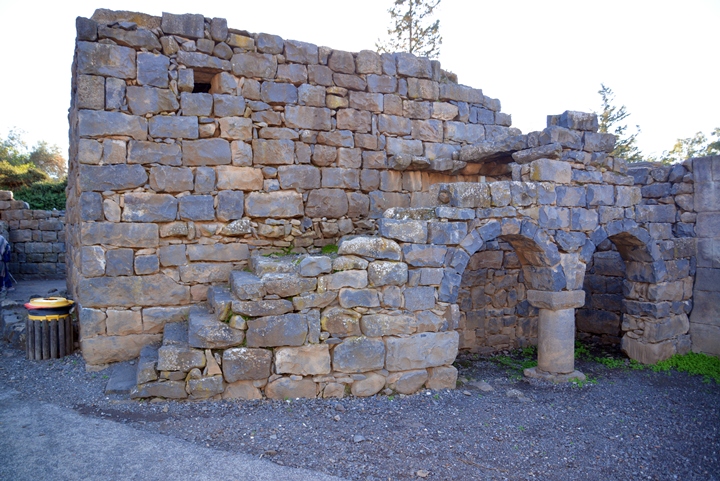 The house of Rabbi Abun is the adjacent restored structure. This beautifully restored residential house is named after a person who’s name was inscribed on a tombstone in the cemetery of the village. 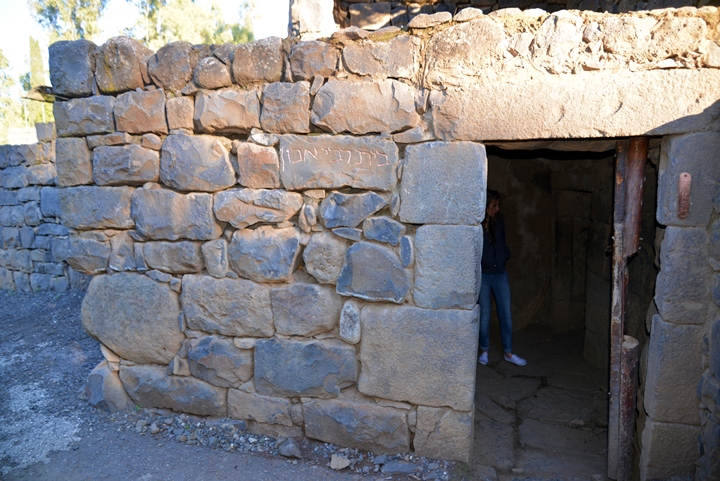 Inside are several rooms, equipped with replicas of Roman period furniture. The kitchen includes an oven, vessels and other household goods.  A milestone was used to grind the wheat grains in order to prepare bread. 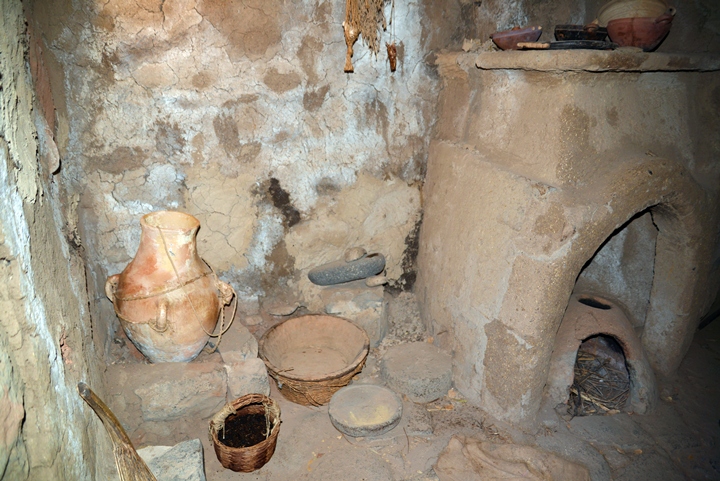 The adjacent room was used as a storage area. 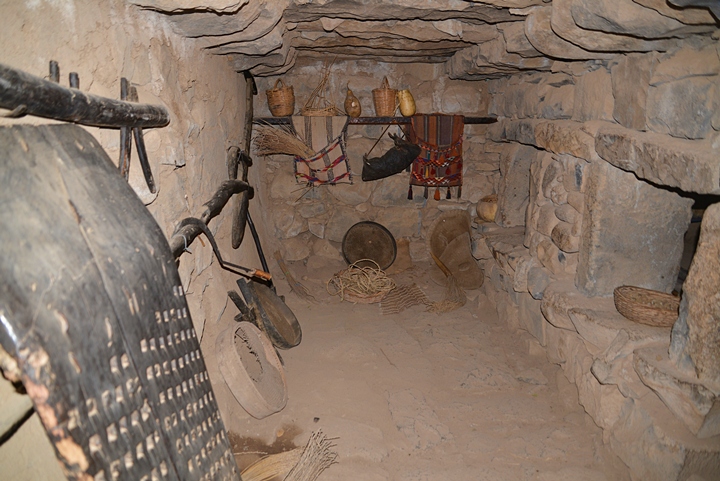 A window wall separates the storage area to the main room. 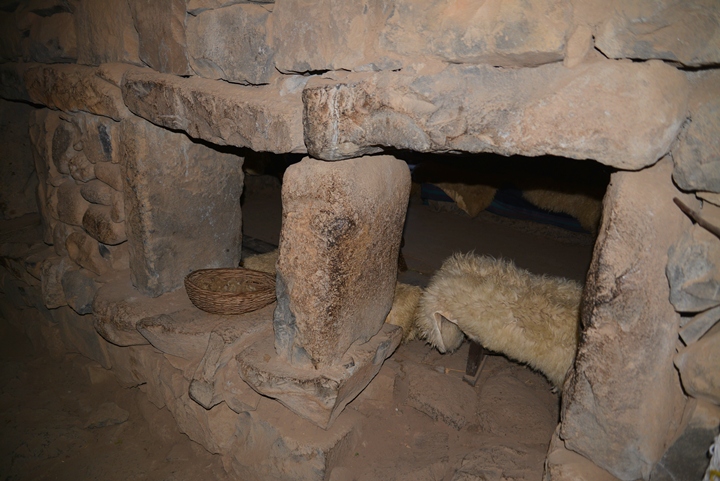 Passing a door leads to the living room. This central room was used for dining, household chores, receiving guests, sleeping and storage. It was illuminated during the day by small windows, while at night by oil lamps set in niches and platforms along the walls. 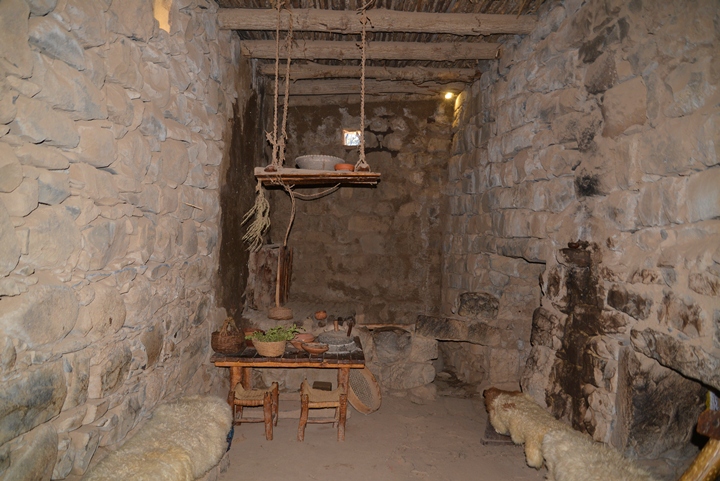 At the edge of the living room is a pantry, where wine and oil were stored in large vessels. 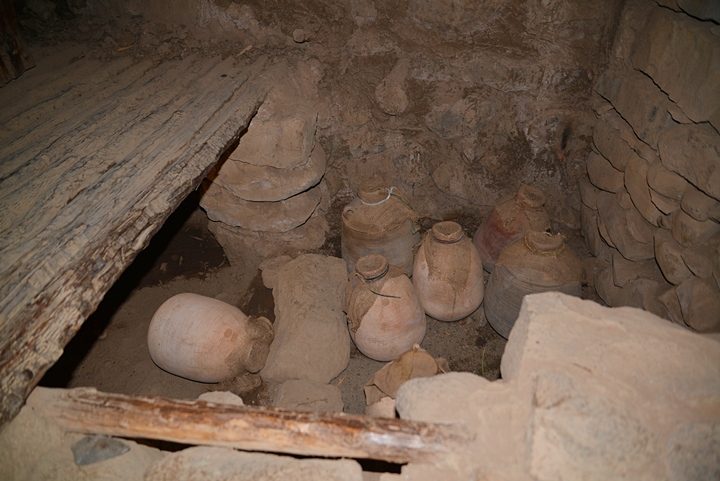 A wooden ladder led up to the loft on the second story. Another entrance to the loft was from the courtyard. From it, the inhabitants could access the roof, which was used as a sleeping area during the hot months, or for other purposes. 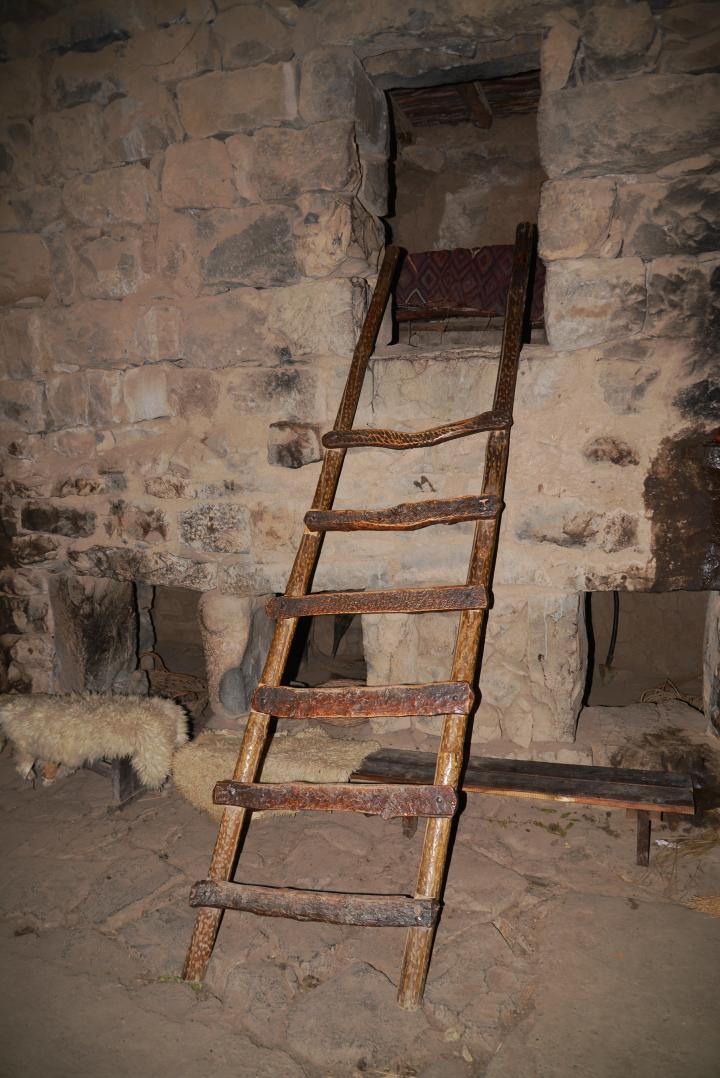 A door and staircase leads from the living room to the outdoor courtyard.  The courtyard included an outdoor kitchen, two ovens, small paved area which was used for dining. It also served as a storage of water and other household possessions.

Another wing of this large residential house was left unexcavated. 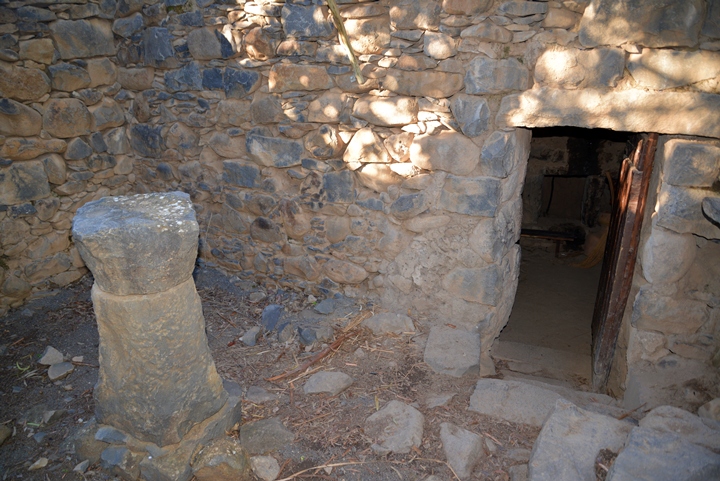 Turning to the right and up the stairs, the path leads to an observation platform. It was set on the roof of another stone house, and allows a great view of the reconstructed village structures. 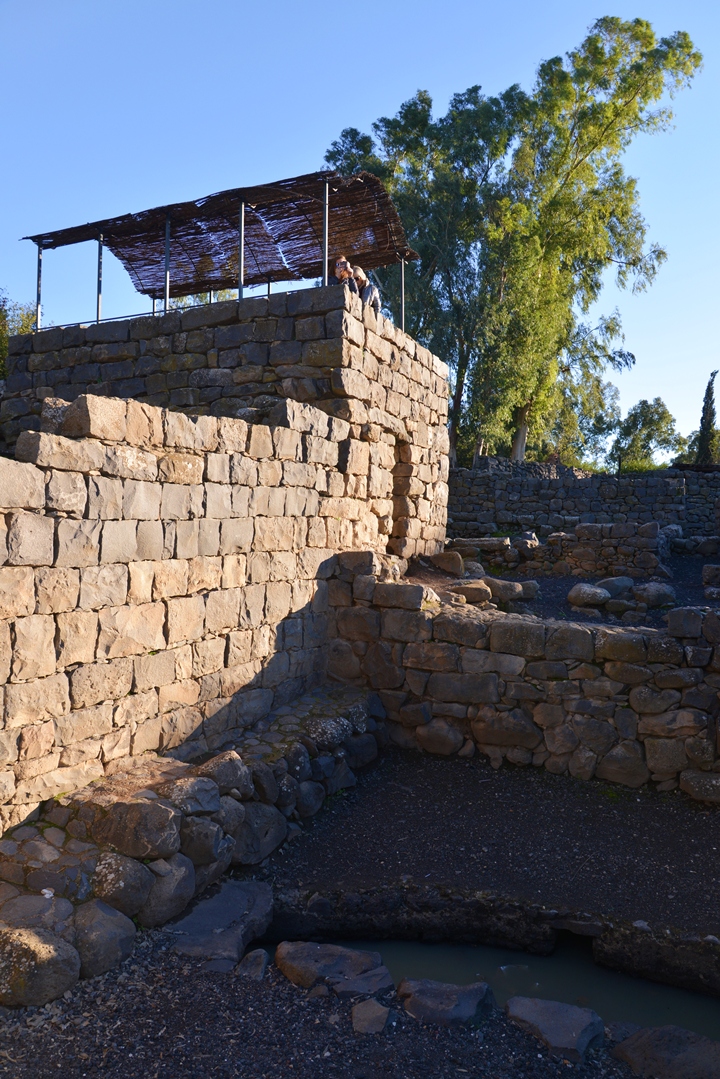 At the bottom of the house is the water source for the village. The spring fills up a basin, as seen in the photo below. 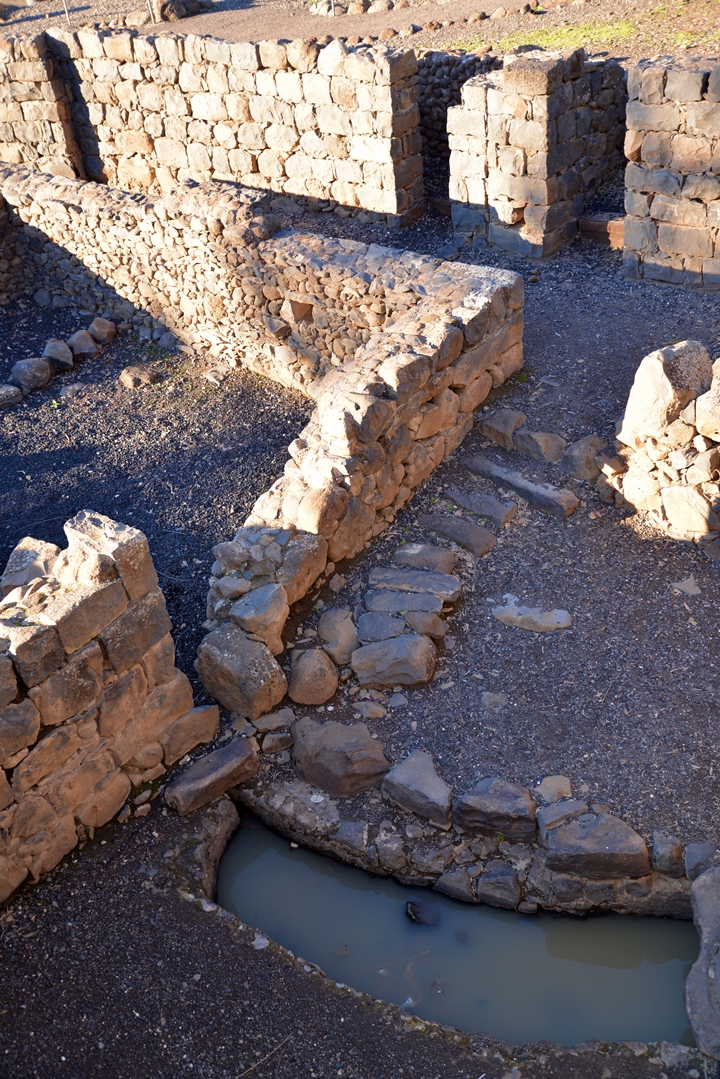 A view of the excavated village from the observation point is seen in this picture. On the upper left side is the synagogue. 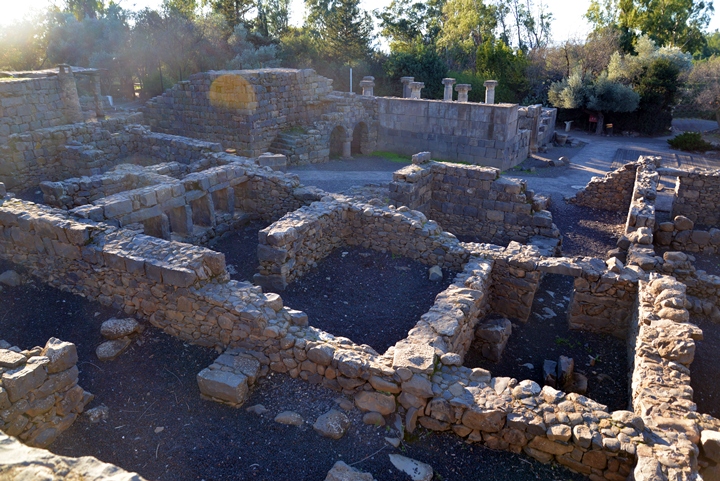 The next photo towards the northern side of the village shows the spring on the bottom, a number of rooms at the edge of the reconstructed village, and  a great oak tree standing in the open area. 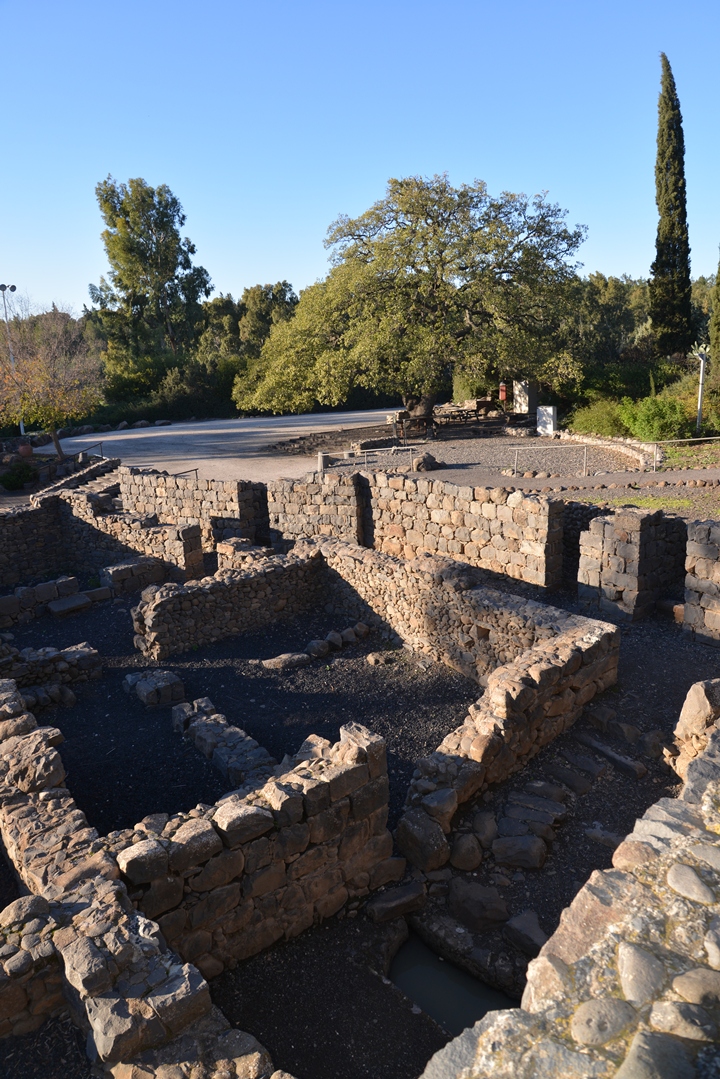 The great oak tree, several hundred years old, has survived due to the proximity to a sheikh’s tomb. 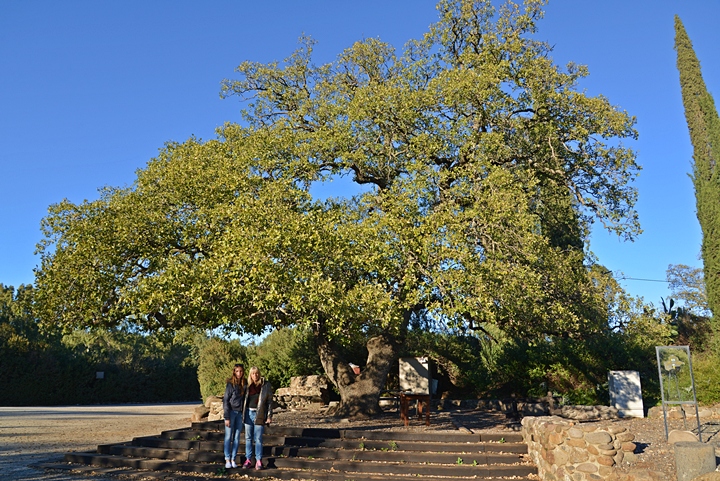 The highlight of the park is the ancient synagogue, which was constructed in the beginning of the 6th century AD. It was built over an earlier and smaller synagogue dated to the 3rd or 4th century.  It is oriented towards the south, facing Jerusalem. There are two entrances – the main portal is on the north side, and another one is on the west side. 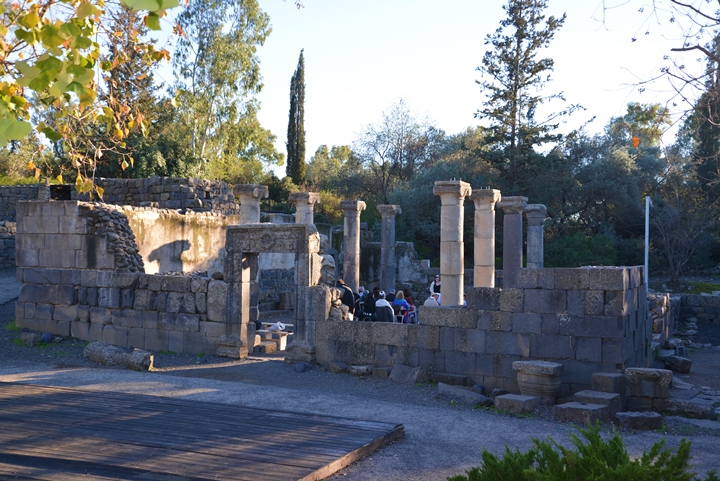 The synagogue is built of finely carved blocks without mortar, and stood two stories high. The second story rested on columns, ordered in two rows of four columns each. The columns divided the interior hall into a central nave and two aisles. The interior was paved with mosaics.

The park welcomes groups to conduct special events such as marriages, holiday prayers and ceremonies. This family apparently conducted a Bar-Mitzva – the Jewish coming of age ritual. 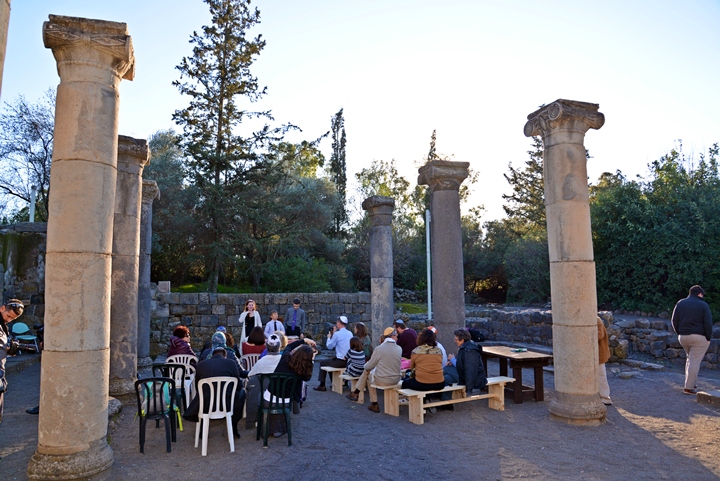 Aligned along all the inner walls of the synagogue are two tiers of benches, where the worshippers sat.

The Torah shrine was located on the south side. 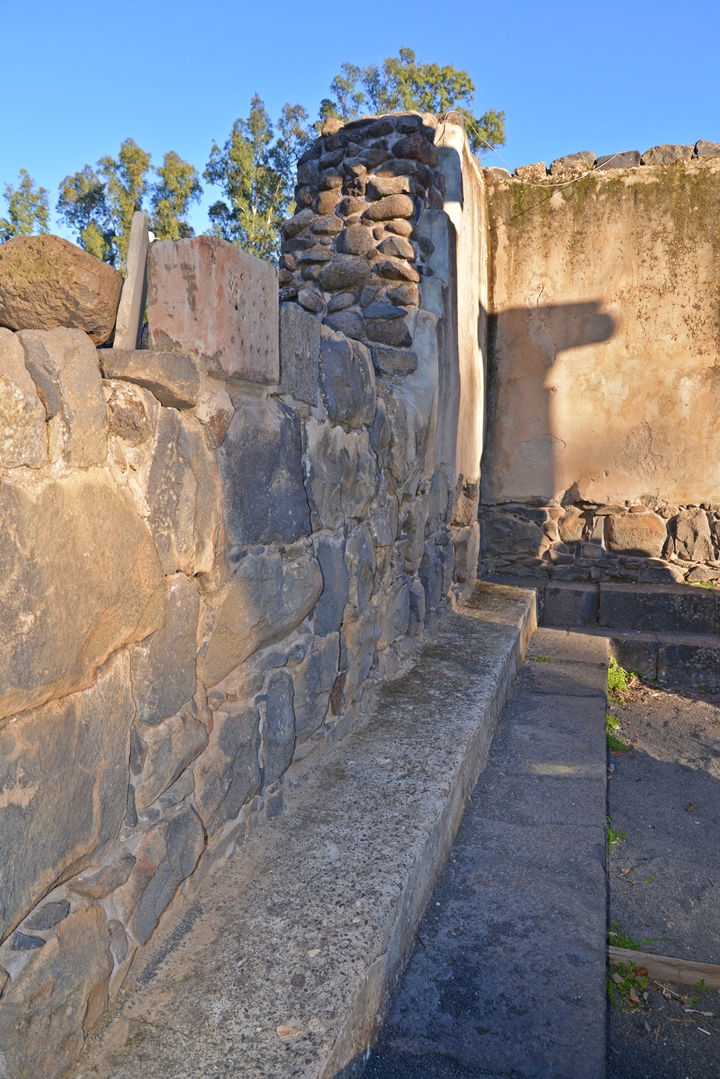 The decorated entrance to the synagogue is seen in the following photo, with Amit and Orna standing in front of it. The lintel is carved with a wreath flanked by two objects- 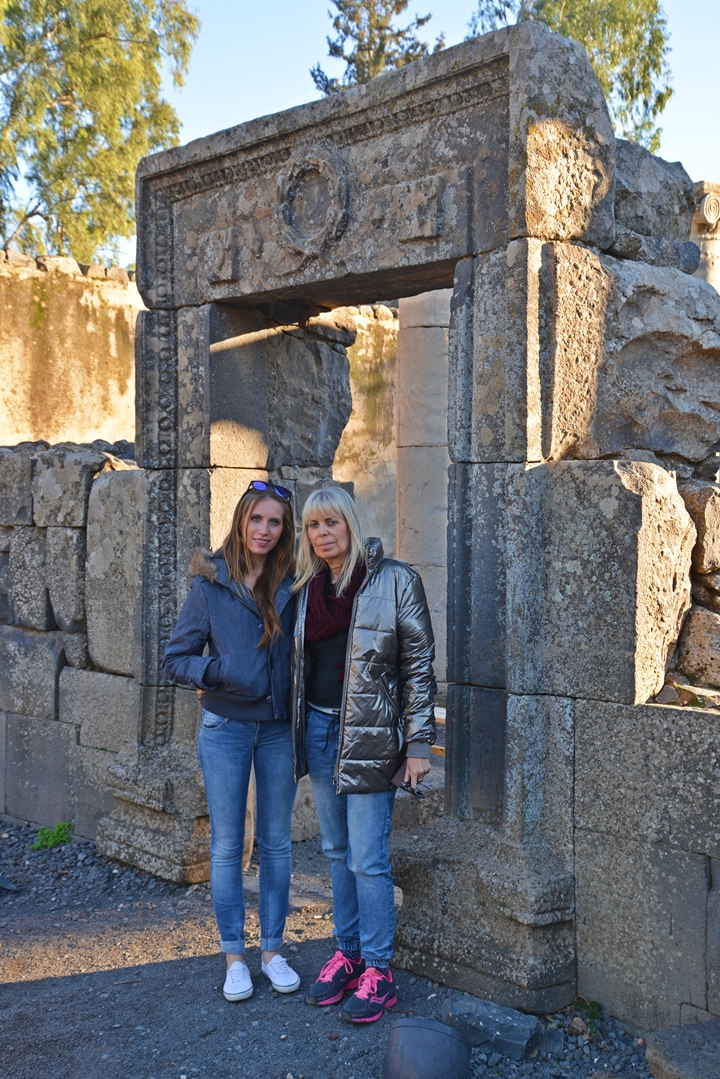 The villages in the Galilee and Golan were based on agriculture, and one of the main sources of income was the production of olive oil and wine.

Two olive oil installations were found in the ruins of the village, and were reconstructed with new beams and ropes. The olive oil production process was based on two major steps – crushing the olives and then extracting the oil.

The first step required crushing the olives using a crushing stone, and collecting them into a basket.  The olive crushing device below (aka “type 3”) used a large rolling stone to crush the olives.  The stone was held upright by an axis, which was connected to a long handle. The handle was pushed by humans or animals. The mashing stone rolled along a cavity  on the circumference of the  base, crushing the olives. The crushed olives would then be collected into a basket and then further processed by the oil press. 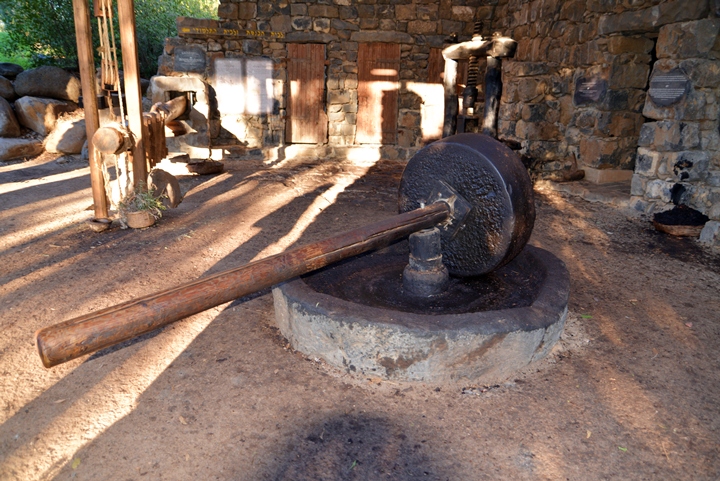 The second step of olive oil production is done on another installation: the basket is pressed with force, extracting the oil out of the crushed olives and collecting the juice into a storing vat.

In this oil press, called “lever based press” (aka “type 4”), a stone weight was tied to the edge of the wooden lever, pushing the lever down. The use of a lever exerts a large force over a small distance. The force of the lever pushed a flat stone down on a basket, which contained the olives. 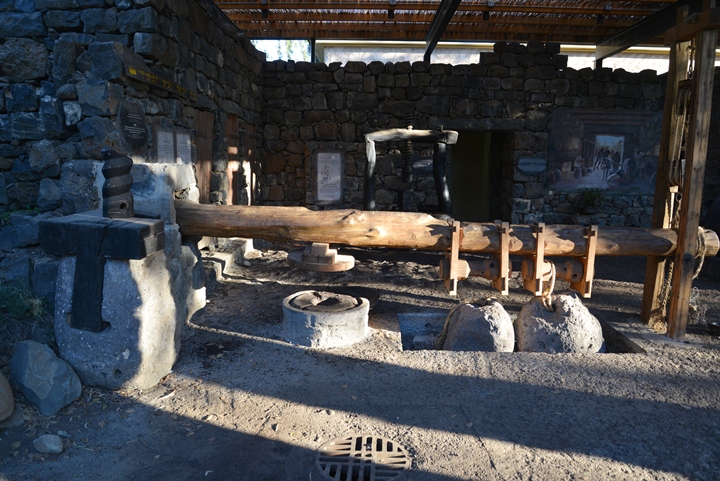 The stone squeezed the basket, extracting the precious olive oil unto the round grooves of a basin stone. The juice flowed down along these grooves, out through an outlet in the basin, and down into a collecting vat. The olive juice contained water and oil. After a few days, the lighter oil in the juice floats above the water, and it is then collected and stored in jars. 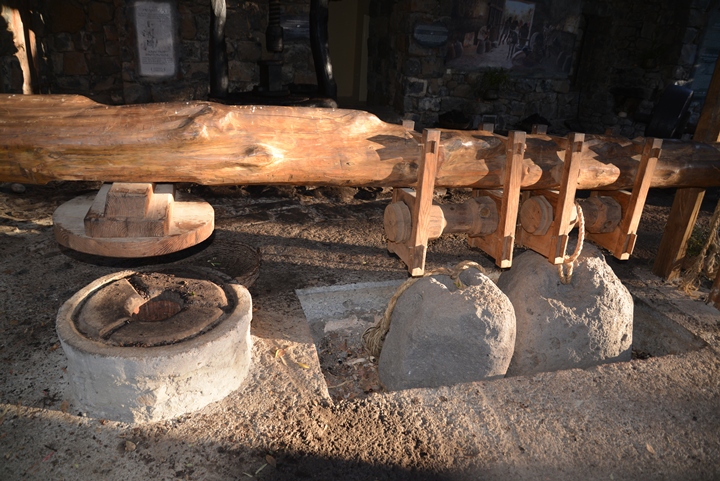 There were other types of presses.  In the “direct pressure screw” (“type 7”) oil press below, a vertical screw was fixed inside a wooden frame. The frame was supported by a stone base with holes on each side. The screw was turned around with a short handle, which pushed down a crushing stone upon the basin. The juice flowed out from an outlet into the collecting vat. 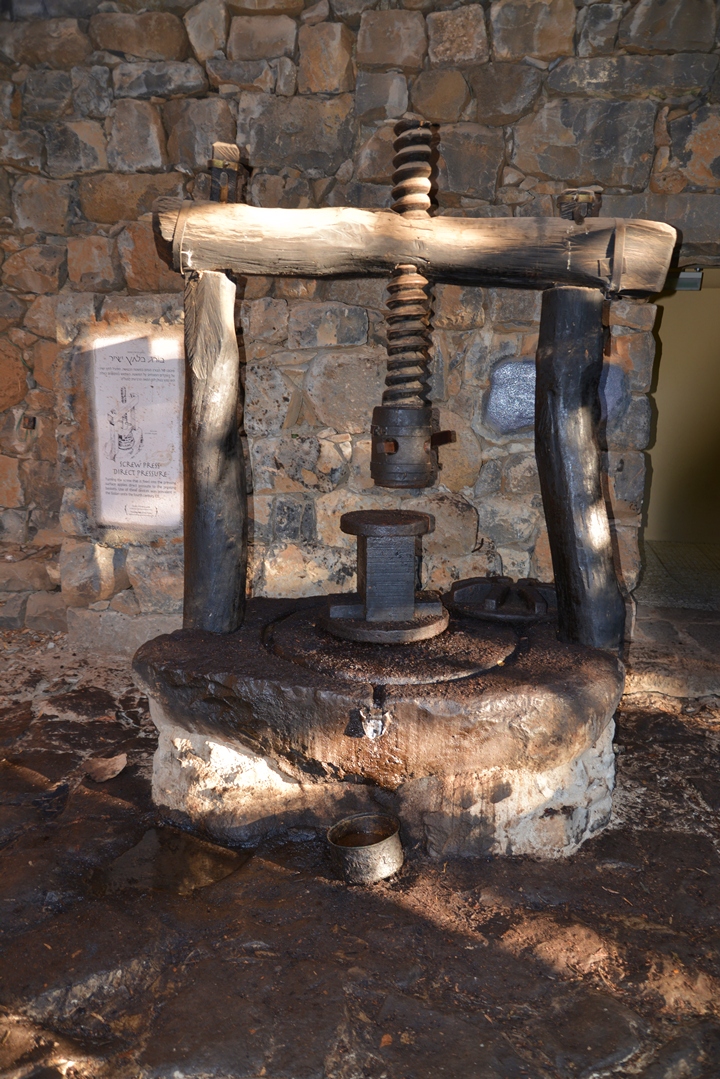