A mysterious ritual site and settlement near the Horns of Hattin.

A mysterious site was excavated in 2018 on a cliff overlooking the Arbel valley, 1KM east of the Horns of Hattin. Adjacent to a Basalt cliff the archaeologist unearthed a ritual structure dated to the Late Bronze and Iron Ages, and ruins of a small settlement.

The site is located on the edge of the plain above the valley of Arbel, 1km east of the Horns of Hattin.

Kh. Kankuza is easily reached by a good dirt road, reaching from the intersection on highway #77 entering to the industrial park of Lower Galilee industrial park. The road passes a cattle gate (remember to close it). The site is located near the water reservoir, above the cliff overlooking the valley. The height difference is 130m between the site and the valley below it. 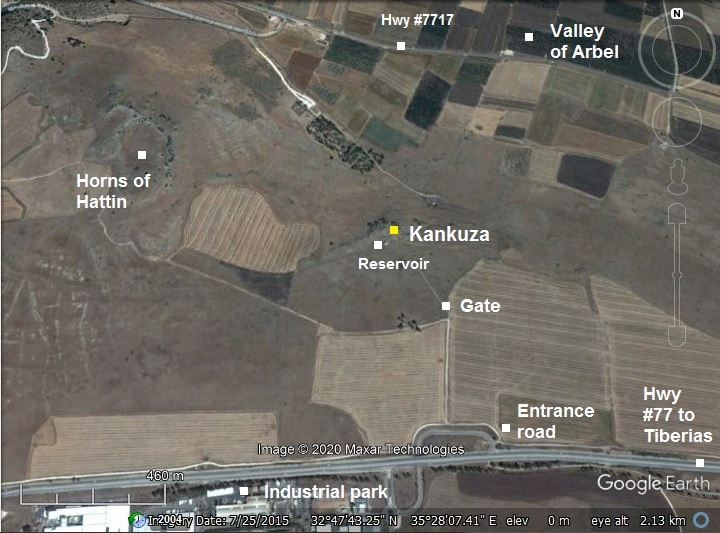 The site was inhabited in the late Bronze age and the Iron age.

A Biblical map is shown here. The horns of Hattin appear as a red dot, marked as “Madon?”. According to D. Dorsey (“Roads and highways of ancient Israel”, p. 98, route T1c), a major road during the Bronze and Iron Age periods passed near the site, descending to Rakkath and Magdala on the shores of the Sea of Galilee. 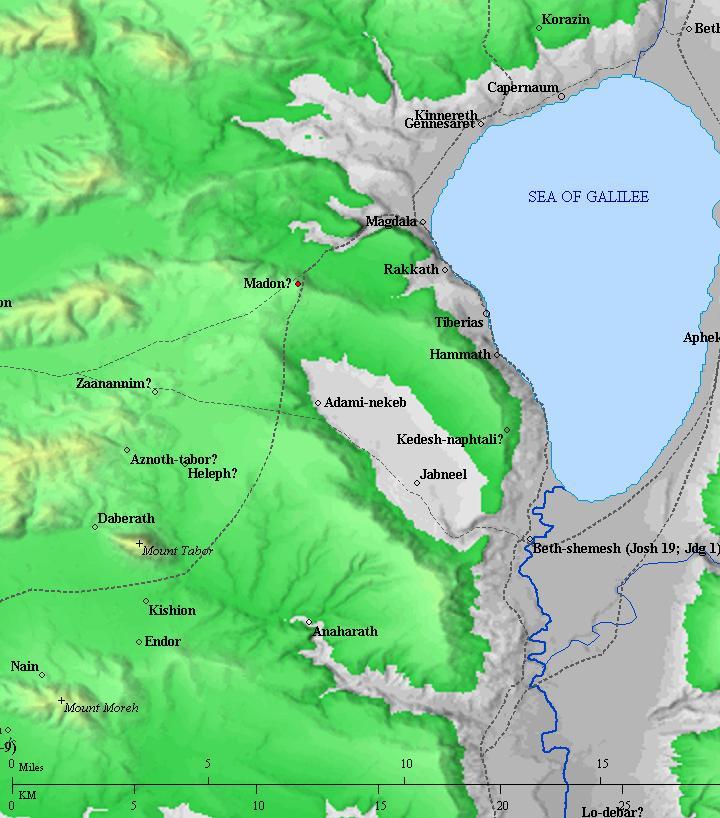 Roads and cities during the Canaanite/Israelite periods thru the Roman period, 20th BC- 1st century AD (based on Bible Mapper 3.0)

Conder and Kitchener surveyed this area during the Survey of Western Palestine in 1882. A section of their map is seen here, east of the Horns of Hattim. The site appears as el Kankuzah, with a pool (Birket) nearby. The map shows a road ascends (dashed line) from the valley and passes between the ruin and the pool. 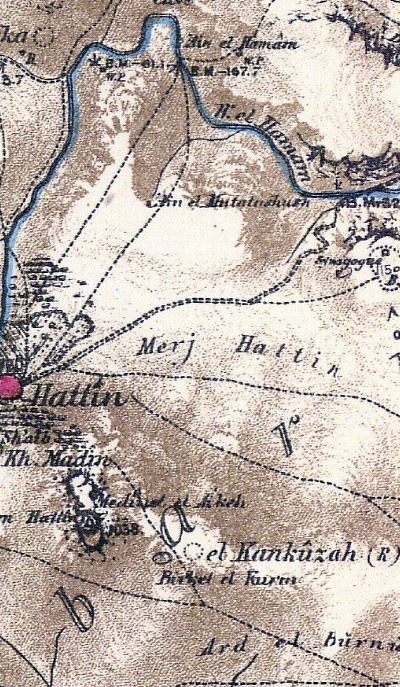 Part of map Sheet 6 of Survey of Western Palestine,

In 1959 a settlement was built on the area south of the site. It was named Ahuzat Nafteli (“Nafteli estate”). It was planned to include 200 families. The settlement soon failed, and was then replaced by a youth hostel. Both failed and the 1980s the fertile was converted back to be used as a farming land.

The site was excavated in 2018 by a team headed by Dr. Rona Avissar and Dr. Rafi Lewis of the Zinman archaeological institute, Haifa University.

A new settlement is planned to be built in the valley below, threatening to damage the site. It is important to protect the site and the national park of Horns of Hattin from modern development.

A drone captured this view of the site from the south side. The site overlooks the fertile Arbel valley. It is best known for the crucial battle between Saladin and the Crusaders in 1187.

The ritual structure is seen in front of the cliff, while the remains of the settlement are around it. 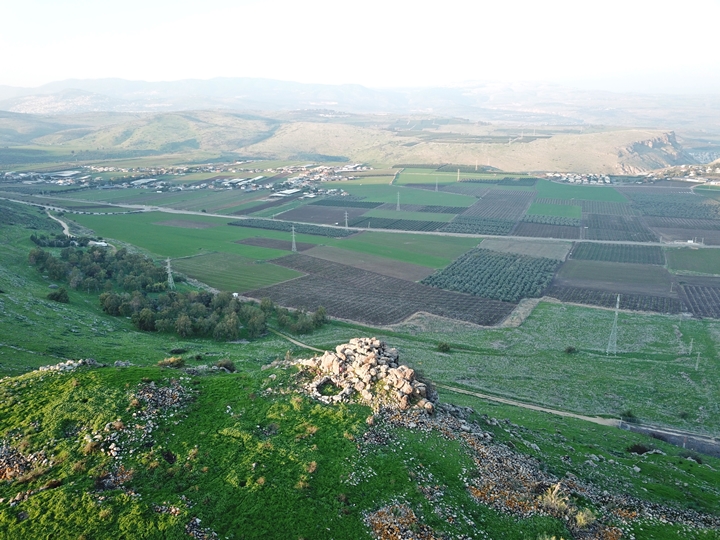 A closer view of the structure and the cliff hanging over the abyss. 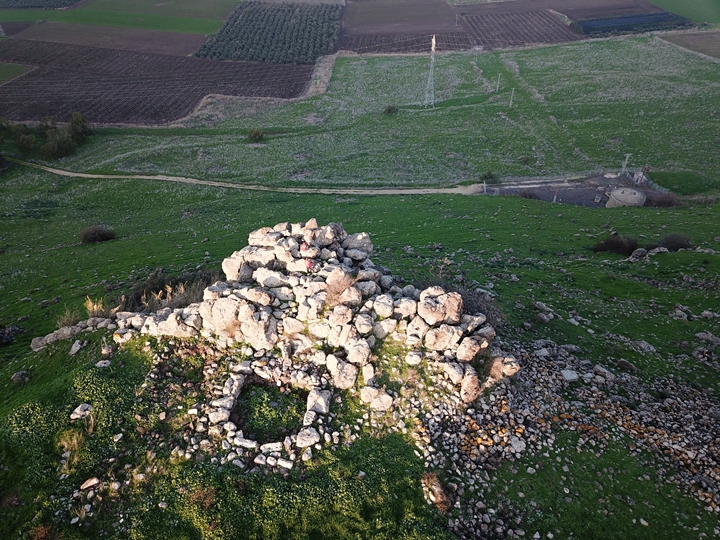 The next aerial drone view is towards the west.

In the background is the extinct volcano known as the Horns of Hattin. It was a Canaanite and Israelite city during the same time of this site. And at the end of the Crusader battle, on the evening of July 4, some of the knights fled to the top of hill but eventually surrender there.

In the foreground are remains of the settlement and the road that descended to the valley. 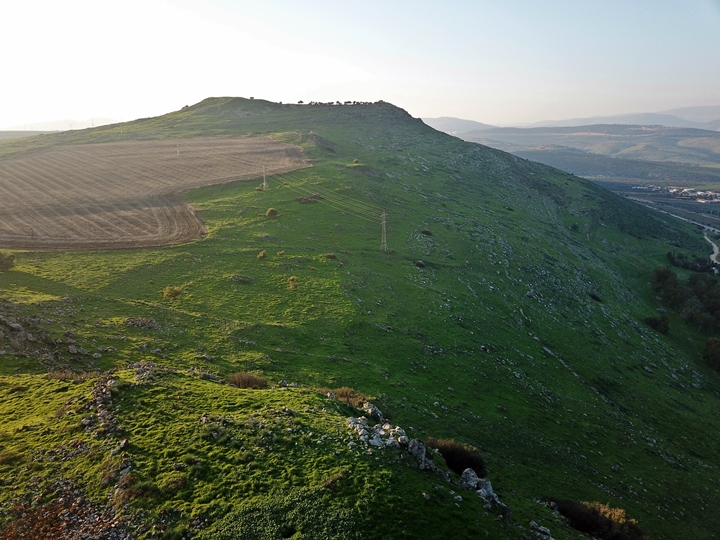 Access to the site is along a dirt road, then pass a cattle gate. The road reaches the water reservoir seen here at the end of the road. 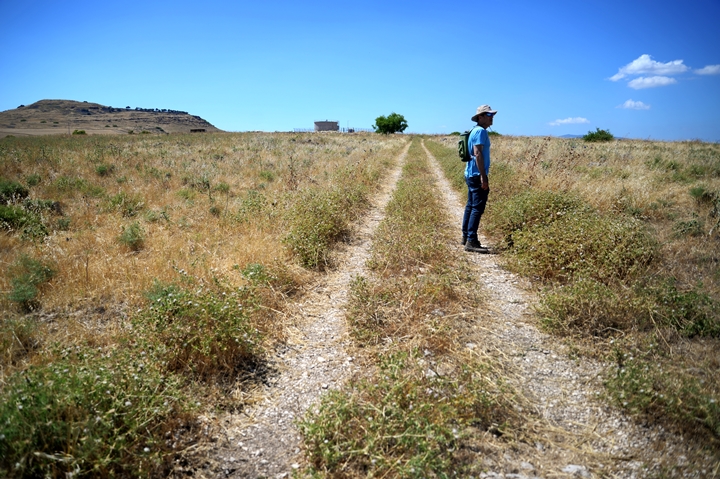 From the water reservoir is a short walk to the site. 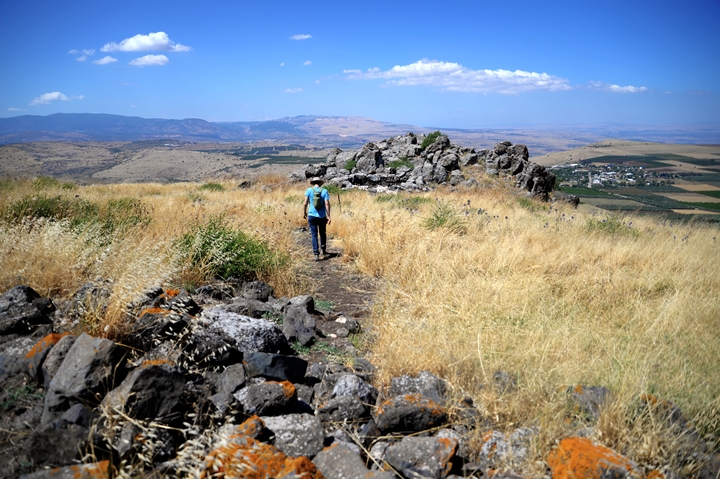 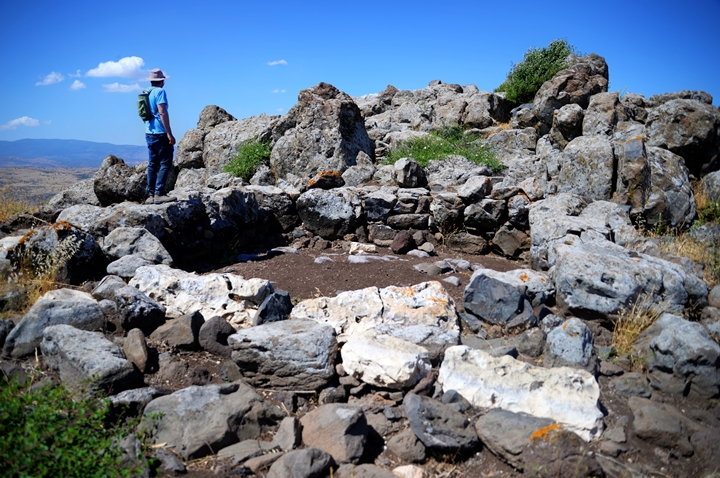 The walls of the structure are ~2m wide, made of huge basalt rock – some weighing an excess of 6 tons. Its entrance, facing south, is made of rectangular limestone slabs. 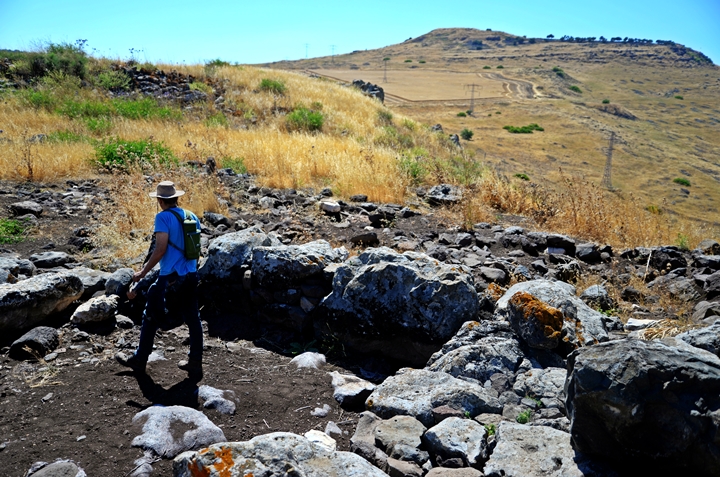 Between the structure and the cliff is an upright monolithic basalt rock standing in a corridor on its north side, now tilted towards north west. The rock has a flat bottom. 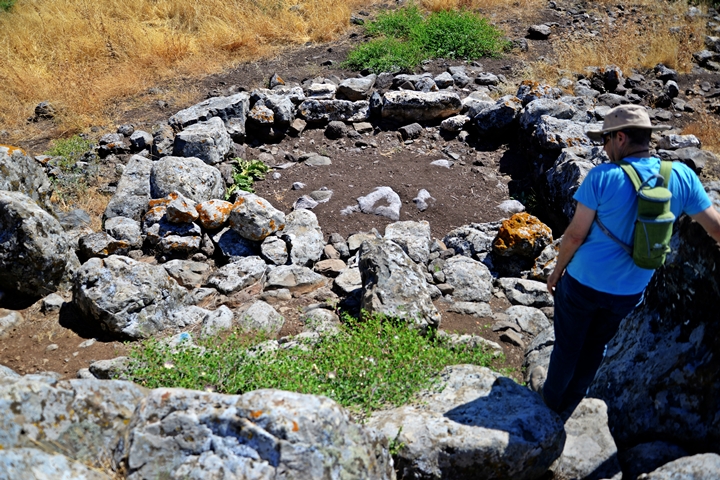 Behind the monolithic rock are 4 built steps ascending to the top of the cliff. 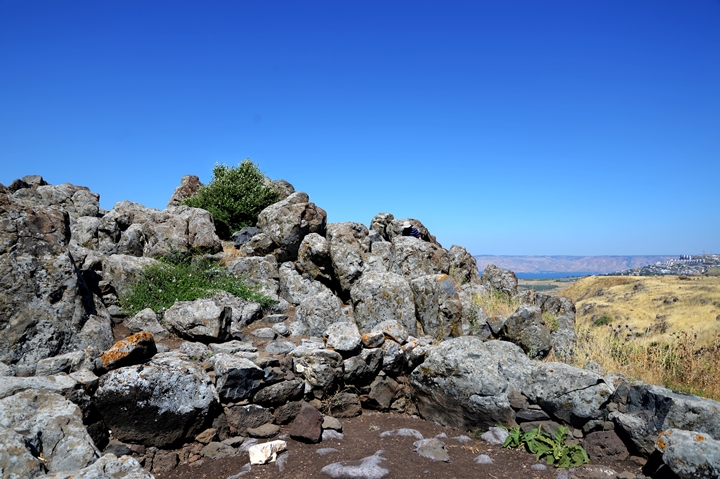 What was the purpose of this structure, and  what was its relationship to the settlement found on its side? This is yet a mystery for the archaeologists.

Note that on the north side of the Horns of Hattim we discovered another ritual site – a series of carved rocks.

From the cliff are amazing panoramas of the area to the north. It is truly worth a short detour. 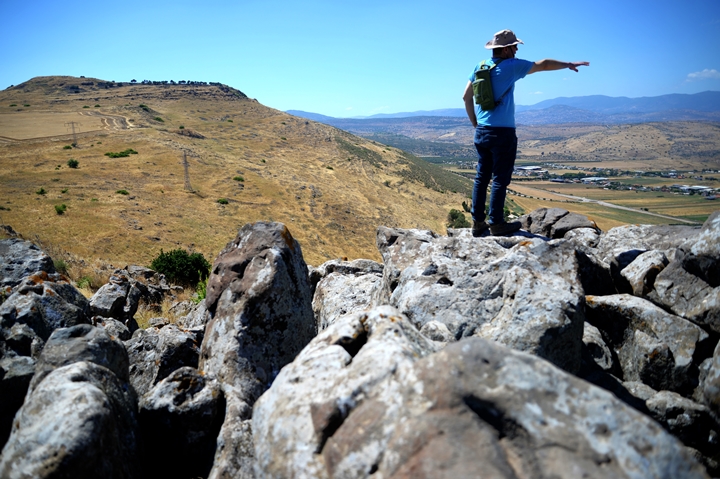 View towards the North:

The Arbel valley stretches along the bottom of the cliff. In the background are views of the Arbel cliff and the mountains of the Upper Galilee. 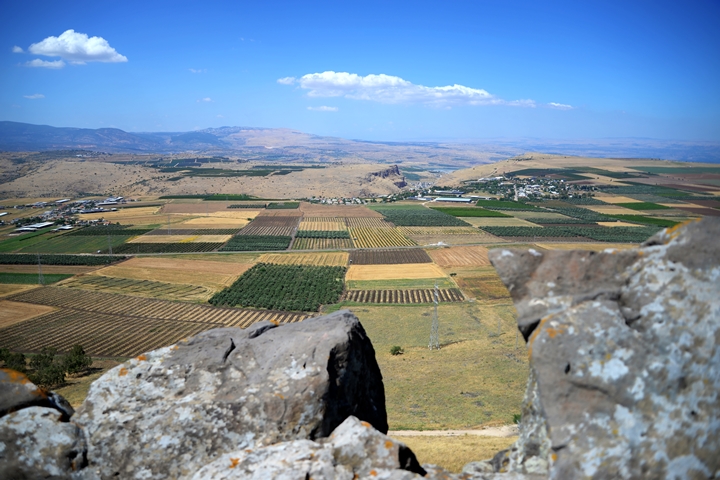 A closer view of the Arbel cliff is seen below. 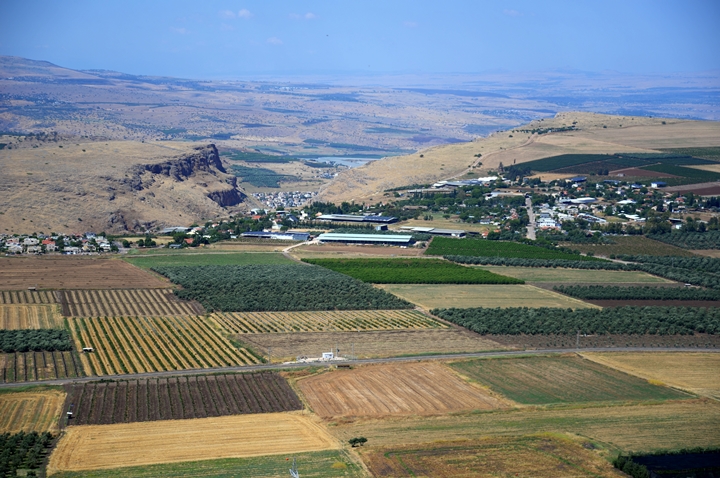 View towards the east:

The blue lake of the Sea of Galilee and the Golan heights behind it. Mount Hermon is visible on the north east side. 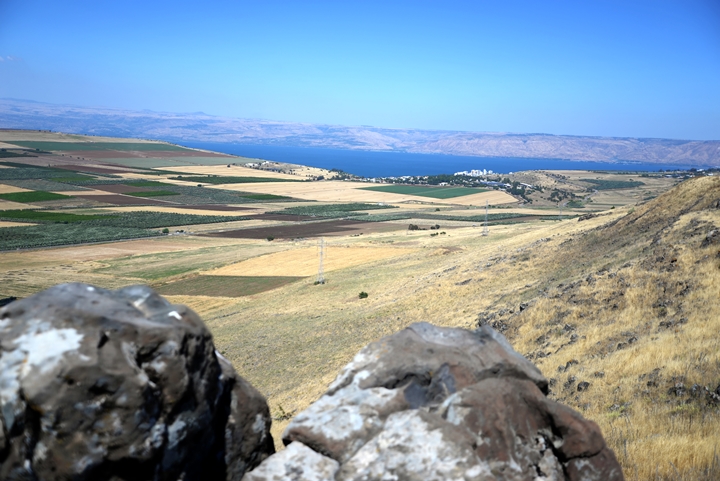 The edge of the cliff stands above the abyss, with more than 100m drop. Be careful while stepping here. 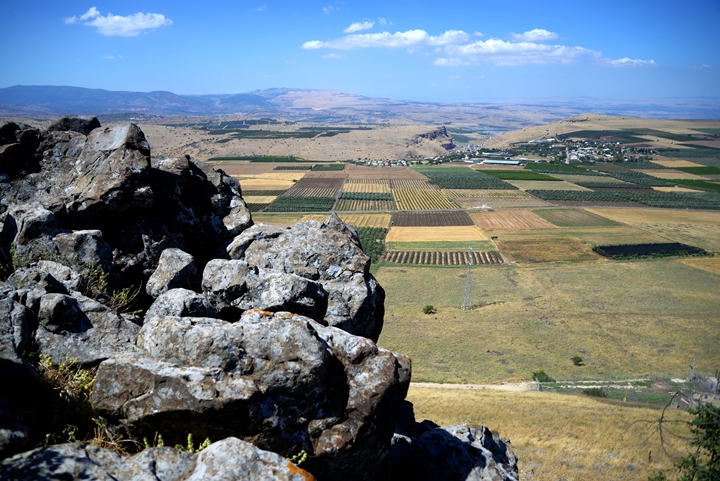 A closer view of the top edge of the cliff. 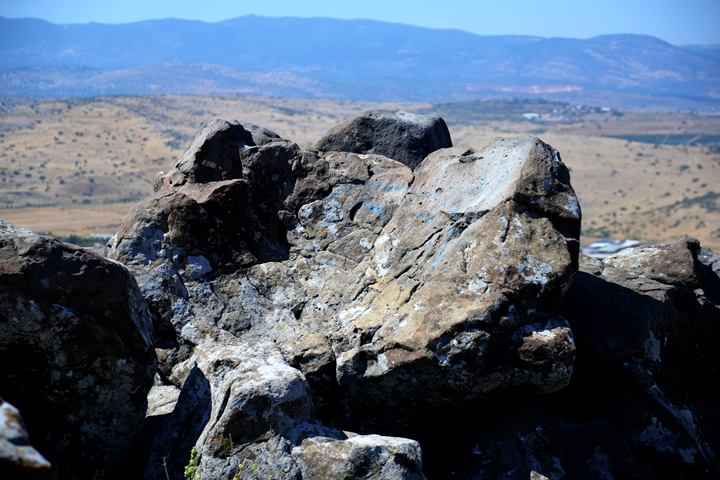 Next view:  Uncle Ronnie standing on the cliff. The Sea of Galilee is seen on the left background, while the upper city of Tiberias is seen behind him. 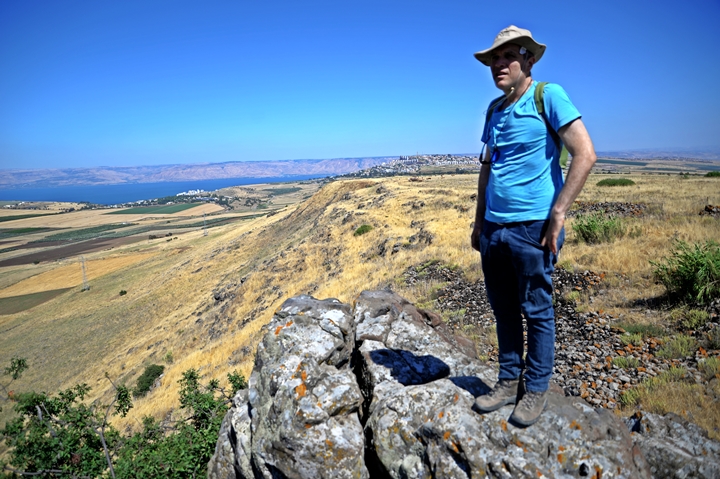 And.. Webmaster Rotem’s father, Yoram, is seen here standing on top of the cliff. 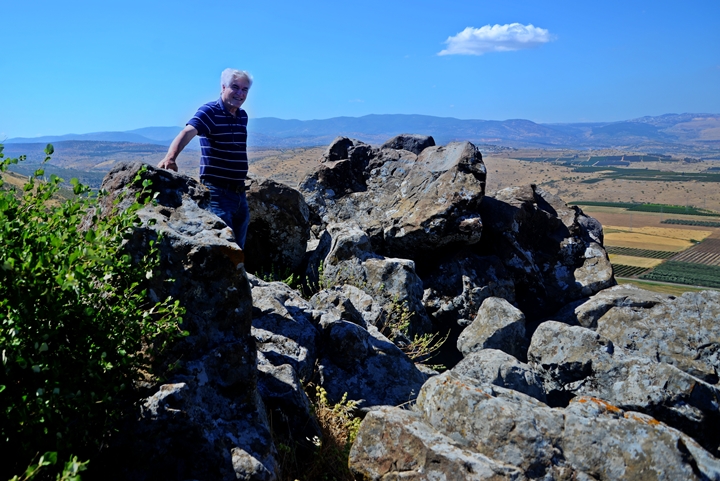 Ruins of a small (10 dunam) village are located on the ridge around the structure.

On the east side are stone piles: 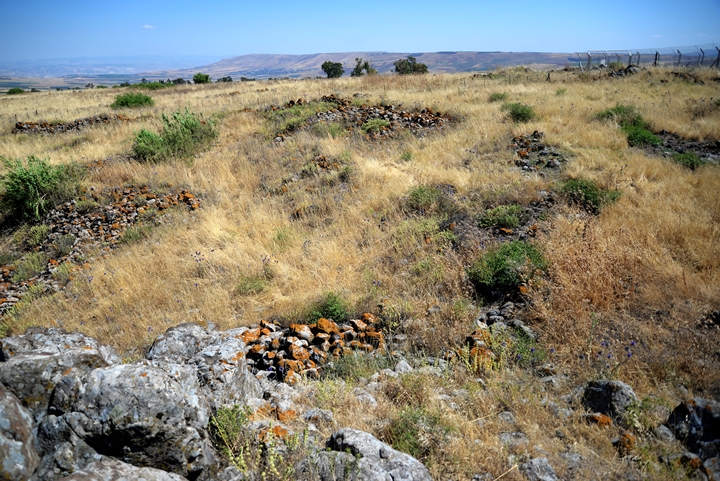 On the west side are traces of ruins of the ancient settlement, including stone piles and bases of walls. 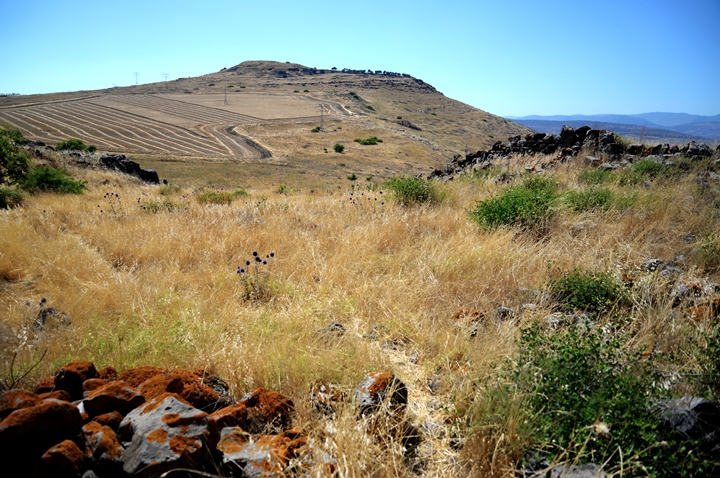 The small settlement was protected by a wall. Some of the sections of the wall are up to 5 layers of stones. 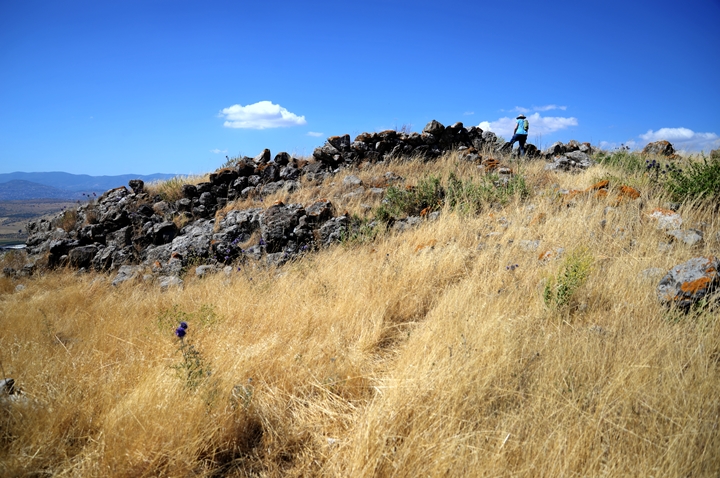 On the west side are tracks of an ancient road that descended to the valley below. 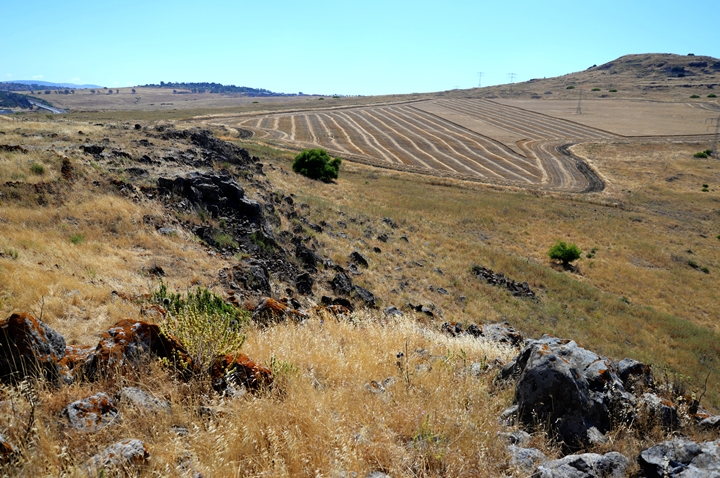 On the surface are large piles of stones, covering the Bronze/Iron age structures. Some of the rocks are covered by orange colored moss. 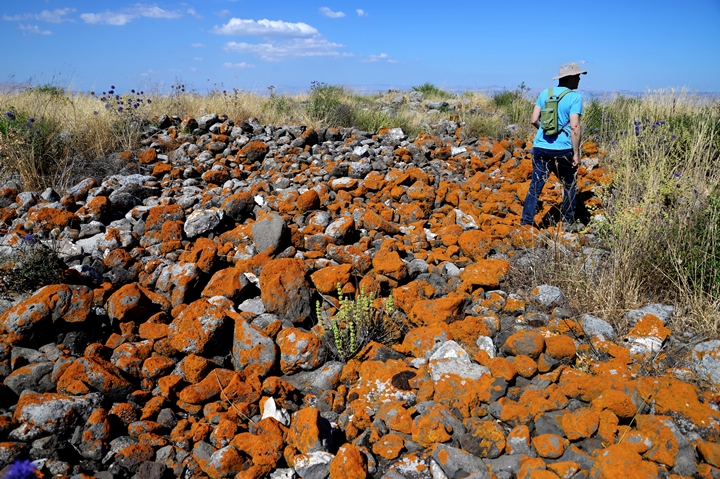 The archaeological survey dated the ritual site and the settlement as Late Bronze and Iron Age. Some of the ceramics are visible on the ground. This piece is probably from a later date – Roman/Byzantine. 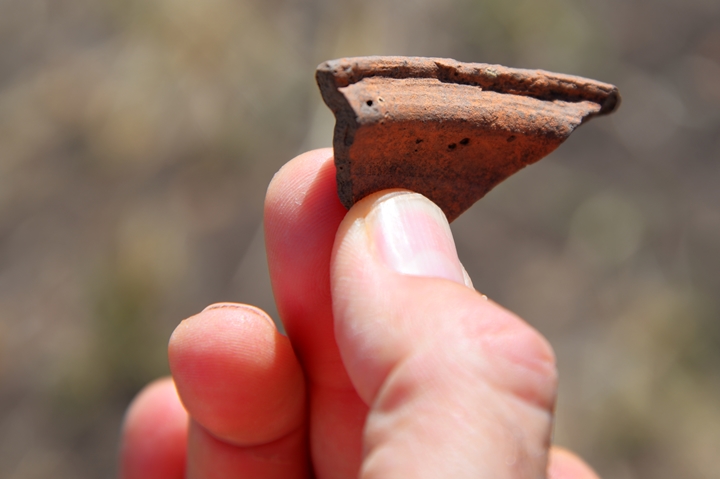 This YouTube video shows a flight of a drone over the site, and a view of its surroundings. It was filmed during the winter time (end of Dec 2020), while the still images were captured in late spring (May 2020).