Around Tel Gezer are 1st century BC Bilingual inscriptions, bearing two lines : “Alkios” in Greek, and Hebrew letters with the name “Boundary of Gezer”. These inscriptions, cut on rocks, provided a positive identification of Tel Gezer, a rare finding in ancient sites. However, their function is debated among scholars – are they markers of the city limits, and for what purpose, or perhaps they are Sabbath stones marking the edge of the allowed travel of Jews during Sabbath or Holidays?

The known boundary inscriptions around Tel Gezer are indicated in the map below. They are numbered 1-12, while the location of #13 was not published. Those markers with a ‘?’ are not seen on the site, or their location is not known. 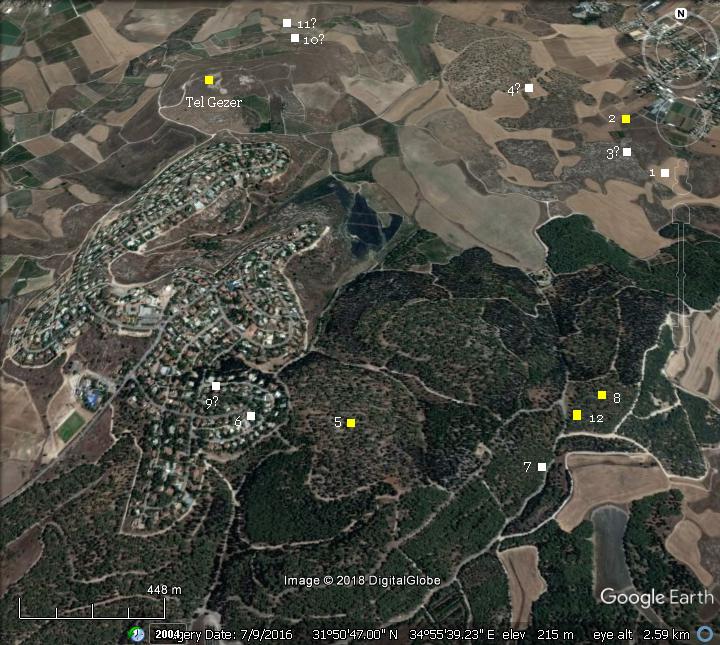 In 1871, C.S. Clermont-Ganneau identified the biblical city of Gezer with that of of Tell el Jezer, after discovering one of the City Boundary inscriptions of Gezer. The 1st century BC Bilingual inscriptions, bearing the name of Alkios  -the Roman Governor of the city – provided a positive location for the city.

One of the stones (#2) were cut out and transferred to the Archaeological museum in Istanbul: 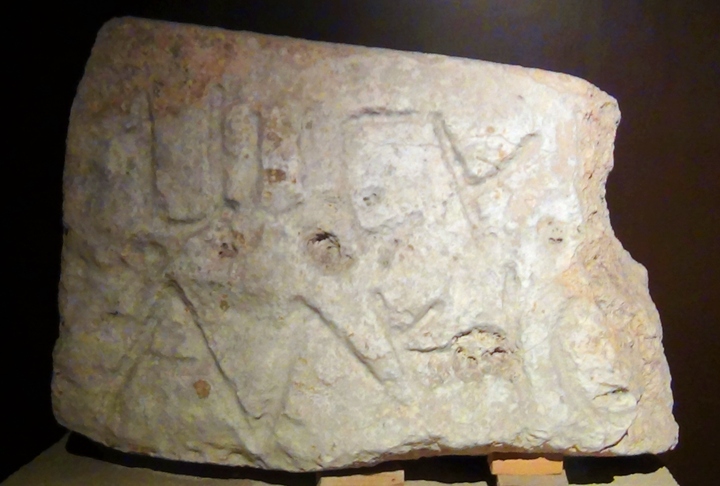 Macalister, who headed the first major excavation of the city,  summarized the history of Gezer in his 1912 report (Volume 1, pp. 37-41).  Macalister wrote about these inscriptions:

“The inscriptions are cut on outcrops of rock, at various places along a line surrounding the city site on the east and south. No inscriptions have been found on the west and north [BW: north markings were indeed found at a later stage].

There are in those directions few convenient rocks, and most probably the boundary line was there indicated by movable landmarks which have in the course of time disappeared. They all read AΛKIOY in Greek letters, and “תחם גזר” in Hebrew – that is, the genitive case of the proper name Alkios, and “the Boundary of Gezer.” The only difference between the various inscriptions lies in the relative positions of the Hebrew and the Greek, and in the omission of the Y of the Greek in the first inscription, for want of room”.

“The explanation of these enigmatical inscriptions which attracts me most is the simplest – that they mark the boundaries of” the city lands. Indeed, the fifth stone occurs in the course of an ancient boundary, marked out by boulders about 2′ 6′ in diameter, which are well shewn in the photographic view. There are some less definite remains of a similar boundary in connection with the fourth stone also. Such  ancient boundaries are common in Palestine, and fragments of similar alignments occur in many places on the hills round Gezer. I have followed most, if not all, of these, hoping to be led to another inscription, but in this have been disappointed. These boundaries are certainly older than local tradition can tell : the natives vaguely attribute them to the Rum, that is the Greeks, which simply means that nothing at all is known about them.

The name Alkios is probably that of some public-spirited governor under whose auspices the delimitation was marked out. It occurs but once elsewhere, in an inscription on an ossuary found long ago at Lydd, not impossibly referring to the same person. The Alkios of the Lydd ossuary is called “Son of Simon Gobar,” which is obscure : Professor Clermont-Ganneau makes the tempting suggestion  that he may have been a son of Simon Maccabaeus, and consequently a brother of John Hyrcanus. This would account for the prominent position he held in the city”.

Macalister also suggested the inscriptions could be Sabbath Markers:

“It has been suggested that they mark out the limits of the Levitical possession, in accordance with Numbers xxxv 2-5, whereby the city was to be in the middle of a square, or at any rate a rectangular figure, whose sides were to be directed to the cardinal points and to be a thousand cubits out from the city wall. It is not easy to follow the arithmetic of this passage, but it would appear as though the ” square of two thousand cubits every way” neglects the internal length and breadth of the city itself, or, what comes to the same thing, treats it as a point at the centre of the square. It will, however, be seen that the lines along which the inscriptions lie, if produced, would meet in a very acute angle a long distance from the city. Possibly there was one other stone of the series at ‘Amwas : in the possession of a fellah of el-Kubab is a fragment of inscription reading IOY AIOY which he asserts he broke from a rock on the lands of ‘Amwas”.

Today Tel Gezer is a National Park, open free to the public.  Many families come here at the weekends to enjoy the sights, absorb the history, and picnic.

In the forest south east of Tel Gezer are public picnic areas, located near some of the markers.

The function and dating of the Gezer inscriptions  pose a riddle, and scholars suggest various solutions. Maclister in 1912 also brought up some of these possible explanations, as quoted above.

Here are some possible identifications for the rock inscriptions:

Since the inscriptions are spelled in two directions with two different languages, it could be that the Greek side (“of Alkios”) points to the outer side of the city, while the Hebrew “Gezer boundary” always points outwards of  the city. These facts were found by Archaeologist Ronni Reich who researched the stones.  Therefore, the markers defined Gezer’s city limit: they separated the Jewish city, captured by the Hasmonean King Simon in 139 BC, to the outer zones governed  by Alkios (or Halkios), an unknown ruler or land owner.

New boundary markers (#10 and #11) were found only in 1972 and 1982 on the north side of Tel Gezer. They bear different names – ΑΛΕΞΑ (Alesa) and ΑΡΧΕΛΑΟΥ (Archelaos).  This implies that the lands to the north of Gezer had 2 land owners (Alesa and Archelaos), while on the east and south was another land owner (Alkios).

Another theory [Rosenfeld 1988] suggests that the land markers were inscribed during the reign of Herod the Great, and the three landowners belonged to his Dynasty.

The purpose of these stones could also have been based on Jewish customs, since work is not allowed during Sabbath or Holidays, including traveling outside of the place of residence. According to the Biblical commands  (Exodus 16:29):   “See, for that the LORD hath given you the Sabbath, therefore he giveth you on the sixth day the bread of two days; abide ye every man in his place, let no man go out of his place on the seventh day”.

This prohibition was translated by the second temple period Rabbis, perhaps based on earlier customs,  to a certain limit where it was allowed walking during the Sabbath or Holidays within the boundary of a village or city. The Sabbath boundary was  defined as a distance of 2000 cubits (about 1km), as  measured from the edge of a settlement to all directions. This measure is also termed as a “Biblical mile”.

The area of the village or city covered the cluster of houses within a settlement, and  included all houses within the range of 70 cubits from one each other.

The illustration here shows the allowed walking zone around the village. 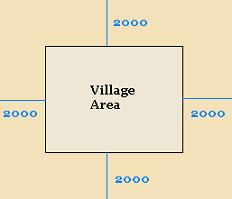 Based on this thesis, the Gezer stones could be Sabbath markers of the Hasmonean or Herodian periods.  However, the 11 markers on the south east side of Tel Gezer lie along an arc of a circle, but the circle’s center is about 0.8km south east of the city. Thus, it is less likely that the markers were Sabbath stones.

The following section shows some of the Boundary inscriptions that are visible and open to the public.

This marker is located on a hillside, within the forest south east of Tel Gezer. It reads on the lower line (in Greek): “ΑΛΚΙΟΥ” meaning: “of Alkios”, and in reversed second line: (Hebrew): “תחם גזר” meaning: “Boundary of Gezer”. 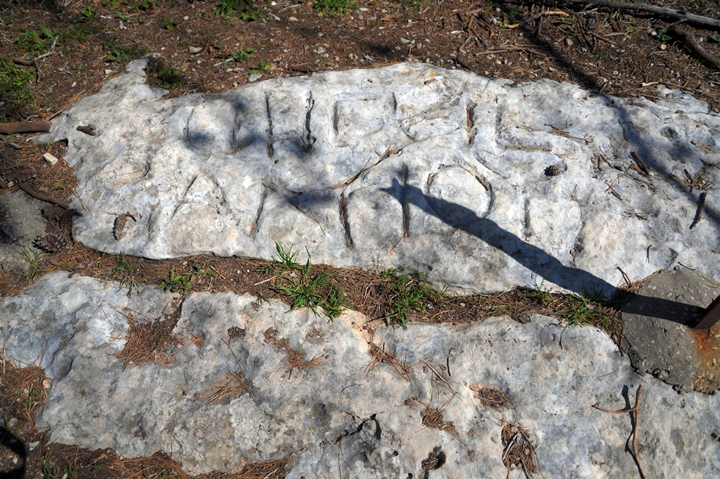 The marker is also seen in the following photo from the reverse side. The lower line reads, from right to left,  “תחם גזר”  meaning in Hebrew: “Boundary of Gezer”. 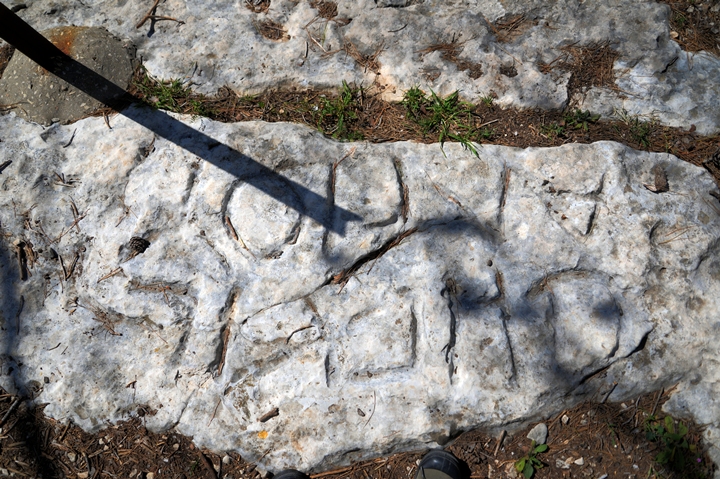 The metal pole on the side of the marker is what remained from an old sign erected by the British.

This marker is located 1.3km south east of Tel Gezer, inside the forest but very close to the road. 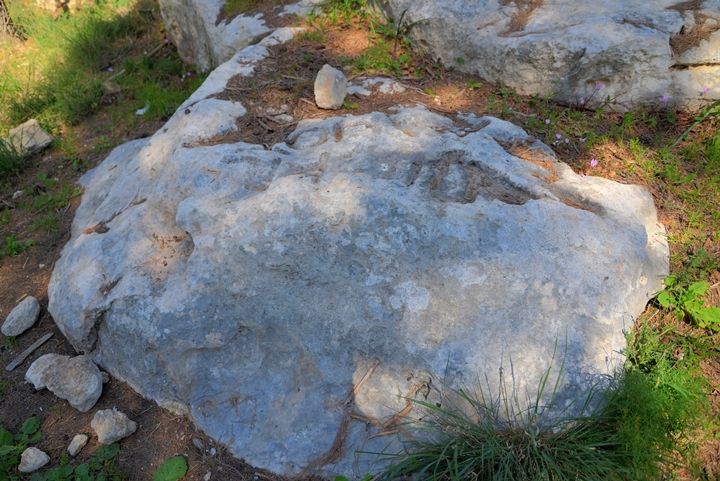 It reads on the lower line (in Greek): “ΑΛΚΙΟΥ” meaning: “of Alkios”, and in reversed second line: (Hebrew): “תחם גזר” meaning: “Boundary of Gezer”. 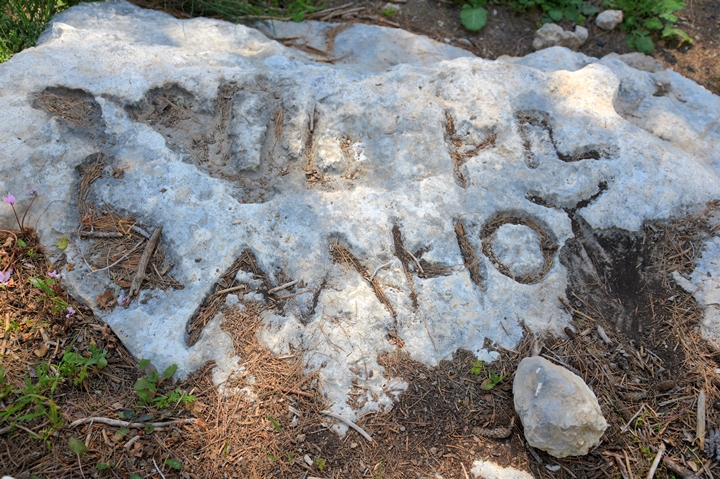 As viewed from the reverse side, reading from right to left, the Hebrew letters “תחם גזר”  meaning: “Boundary of Gezer” are better seen. 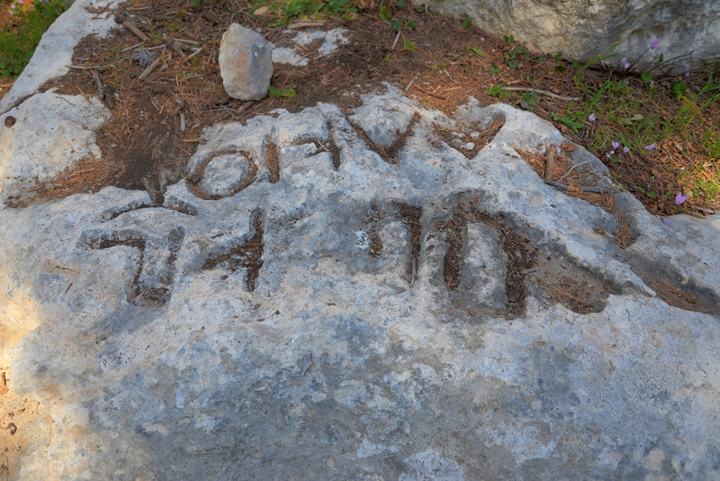 This marker is located on a stone, adjacent to a lone eucalyptus tree inside a pine tree forest. 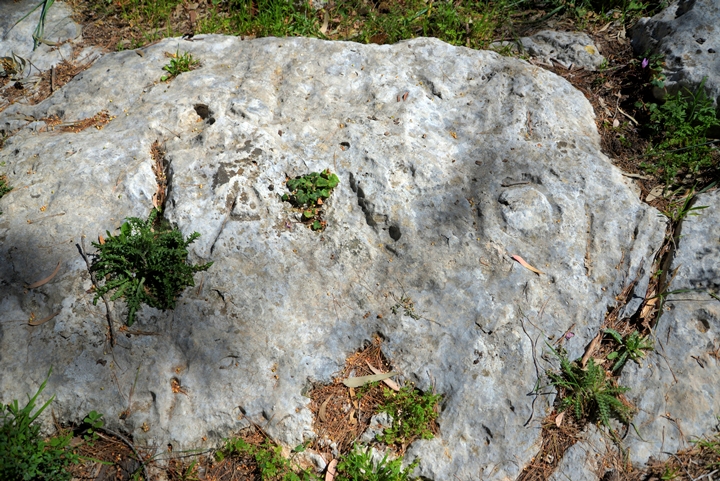 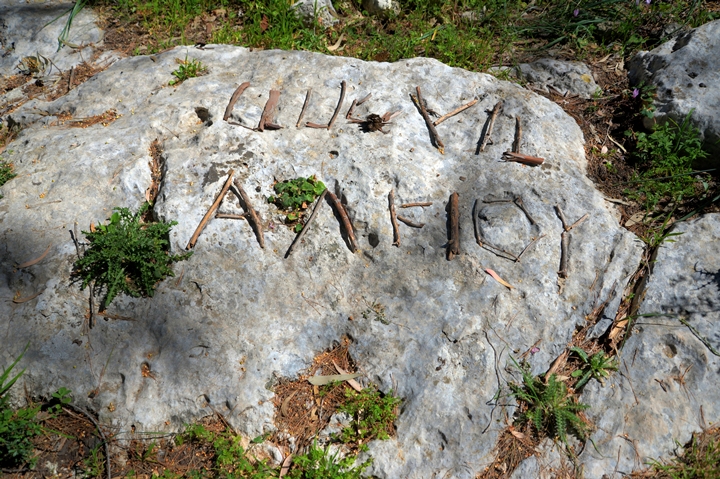 * Names of nearby points of interest:

Other inscriptions on rocks: