Remains of a multi-period city, in the entrance of the ‘Iron pass.

Tel Esur (Tel assor, Tell el-Asawir) is an archaeological site in the Sharon region, at the western entrance to the Wadi Ara (Nahal ‘Iron) pass, along the Via Maris (“Way of the Sea”). The mound (24 dunams in size) and its foothills were occupied from the Middle Bronze period until the Persian, Hellenistic and Roman periods. An earlier Early Bronze period , covering a massive area (647 dunams), was the largest city in the Southern Levant region.

* Thanks Dr. Shay Bar for assisting in the compilation of this web page *

The aerial map shows the location of the site, indicating the highlights of the area.  Ein Esur springs are located in the green area on the east side of the mound. Highway #65 passes south of the Middle Bronze period mound. During the Early Bronze period the city was much larger, occupying the area of the mound, the fields around it on both sides of the highway. 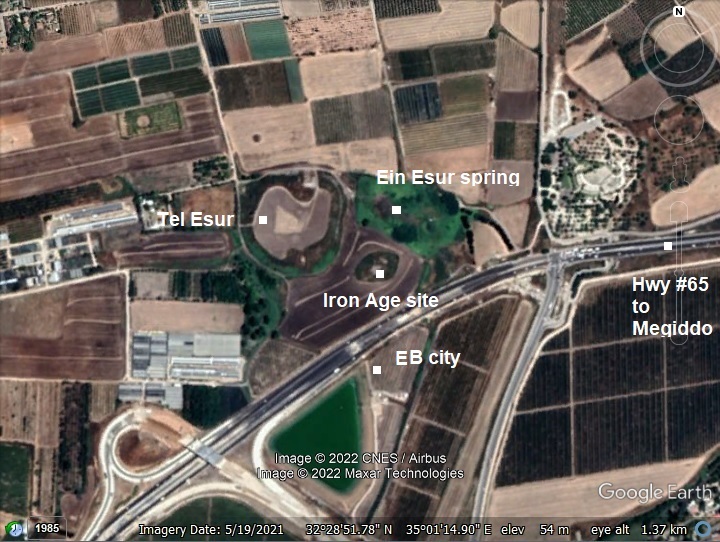 At a later time, during the Early Bronze 1B period (3150-3050), the city grew to a staggering size of 647 dunams (!!), spread in the fields around and south of the mound and on both sides of the modern highway #65. This walled mega city (“‘Ein Esur”) was densely built, planned with city quarters and streets, silos and storage facilities, and a temple. It was the largest Early Bronze city in the southern Levant!

The Early Bronze city was abandoned at the end of the Early Bronze Age 1B (~3050 BC). This follows a general pattern, as most of the EB  II-III cities were depopulated in the Levant. It may have been a result of onset of drier climatic conditions, which resulted in insufficient resources to support the large cities. Most cities in the Levant disappeared and settlements were abandoned.

This massive city was lost until its rediscovery in 1977.

The mound was settled from the Middle Bronze 2A period (2000-1750 BC). The size of the Canaanite city shrank to 24 dunams and limited to the mound, a fraction of the Early Bronze period city. It was fortified and protected by a peripheral wall and towers. Remains of the walled city are located on top of the mound that is seen today.

The excavation team, headed by S. Bar, are working on several areas of the Middle Bronze period mound. Two areas were examined to date: area A on the south side on top of the hill, and area B on the northern foothill.

In the Bronze and Iron ages, Esur was in the crossroads of major roads. Dorsey (“The roads and Highways of Ancient Israel”) shows on Map 2 the following roads:

During the conquest of Canaanite Israel by Pharaoh Thutmose III (1458 BC), the Egyptian Army passed at Esur on the way to fight the battle and siege of Megiddo.

A Biblical map of the area shows the position of the city (marked with a yellow circle) at the western entrance to the ‘Ara pass, connecting the coast, via Megiddo, to the  valley of Jezreel and beyond. 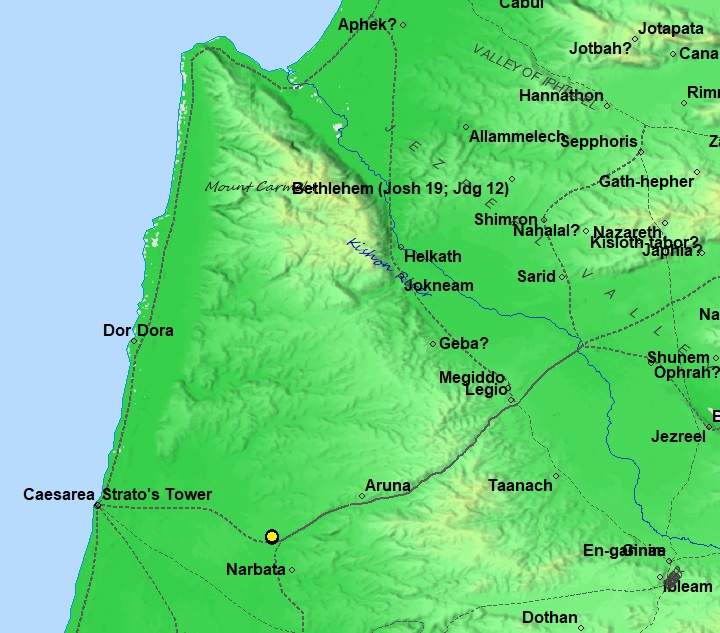 Map of area around Esur (yellow circle) – from the Canaanite thru the Roman periods  (based on Bible Mapper 3.0)

The excavation team, headed by S. Bar, also worked on another area, south east of the mound. They unearthed a large public structure from the early 8th century BC (probably during Jeroboam II reign), storage stores and a 13×13 tower. Some Scholars identified the Iron Age city as Arubot (1 Kings 4:7,10):

“And Solomon had twelve officers over all Israel, which provided victuals for the king and his household: each man his month in a year made provision… the son of Hesed, in Aruboth; to him pertained Sochoh, and all the land of Hepher:”.

However, the archaeologists did not yet discover remains of the Solomonic 10th century BC. Therefore, this identification might be an error.

Conder and Kitchener surveyed this area during the PEF Survey of Western Palestine (SWP) in 1873. A section of the survey’s map, part of Sheet 8, is shown here.  The site Tell el Asawir (Arabic for “Mound of the bracelets”) appears near the title “Kh. es Sumrah”. The site is near the intersection of major roads: 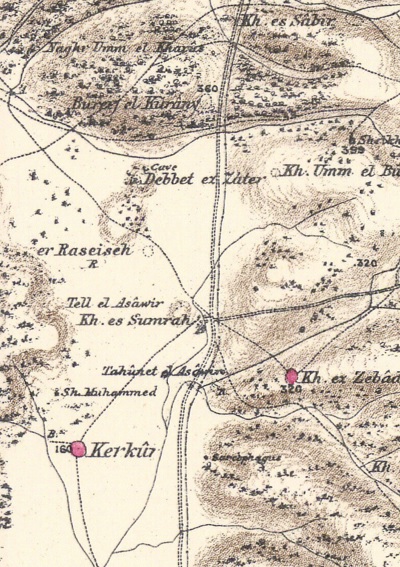 A 1940s British map shows the site on the west side of Wadi ‘Ara (Nahal ‘Iron). The map shows the mound (Tell el Asawir), the springs of ‘Uyun el Asawir (marked “Sp”), and a small mound on the south east (named “Esh Sh. Tufeish”).  A road passes on its south side – now modern highway #65. 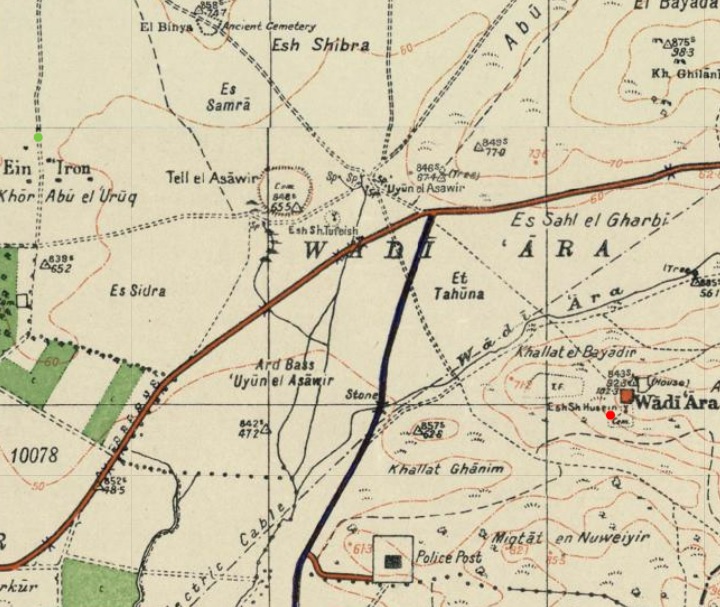 The Tel is located in an open public place. Access to the site is from Moshav Ein ‘Iron.

The excavations in Tel Esur are conducted by an IAA team, headed by Dr. Shay Bar, with the assistance of volunteers and high school students.  This educational excavation aims in increasing awareness in Israeli youth of archaeology, history and ancient culture.

The drone view is from the west towards the east. The modern highway #65, seen here on the right (south)side,  uses the same pass as in ancient times, traversing via Wady ‘Ara (Nahal ‘Iron), connecting the coastal plains to the Jezreel Valley. 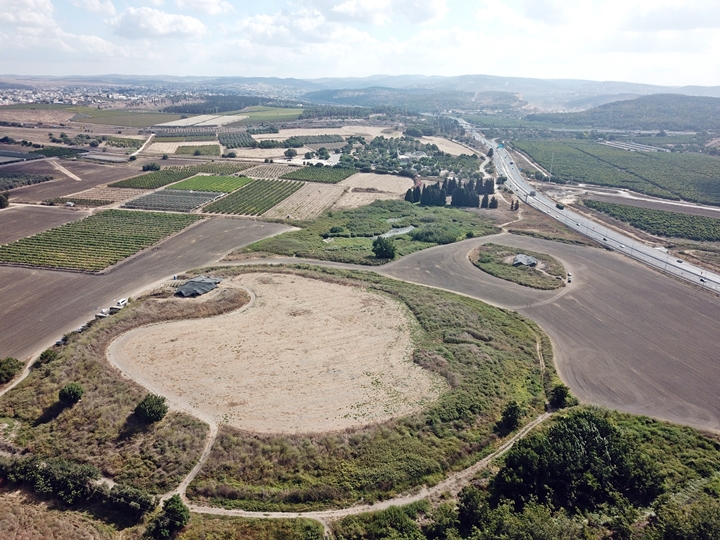 Below is a legend of the major points of interest is illustrated on this view. The areas of excavations are indicated – areas A thru D, where:

The earlier cities of the Neolithic/Chalcolithic and Early Bronze periods are covered under the fields around the site and on the other side of the highway.

The spring of Ein Esur (En Aruboth) is seen on the east side of the mound. 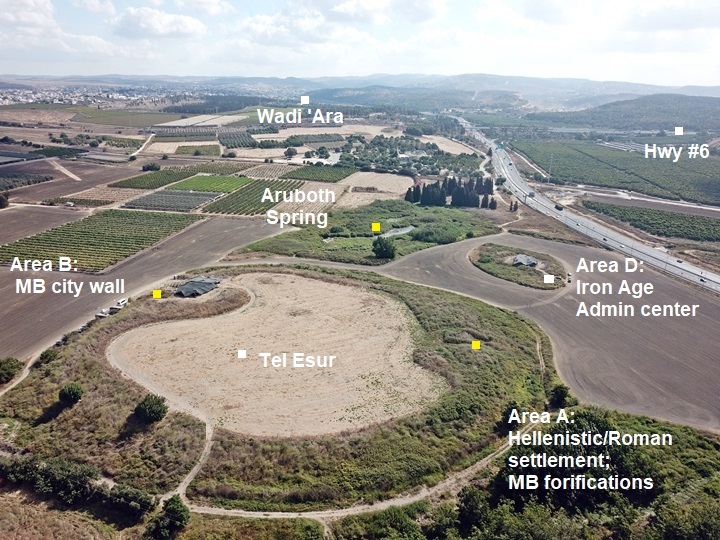 The following video shows a view of the site and its surroundings. The drone circles the mound starting from the south side.

Tel Esur (Assor, Assawir) is an oval shaped mound with a south-north axis, rising 10m above the fields around it. The mound, 24 dunams in area,  was constructed  during the Middle Bronze 2 period, raised on top of earlier cities (Neolithic/Chalcolithic and Early Bronze periods). Albright, who visited the site in 1923, assumed that the oval shaped mound was probably the source of the Arabic name of the ruin – Tell el-Asawir – “Mound of the bracelets”. 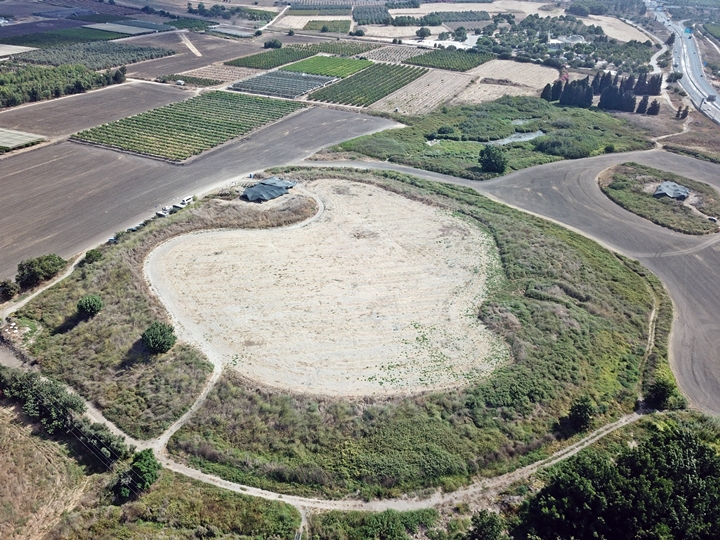 Two excavation areas were conducted on the Tell: Area A and B. These are detailed below.

The following photo shows the mound from the north east side. The excavation tent covers area B.

Under the tent of Area B are remains of the fortifications of the Middle Bronze 2 walls (1.2m wide) and a tower. These were part of the ramparts that surrounded the Middle Bronze period city. The walls, ~700m long, were raised several meters higher above the stone base with layers of mud bricks. 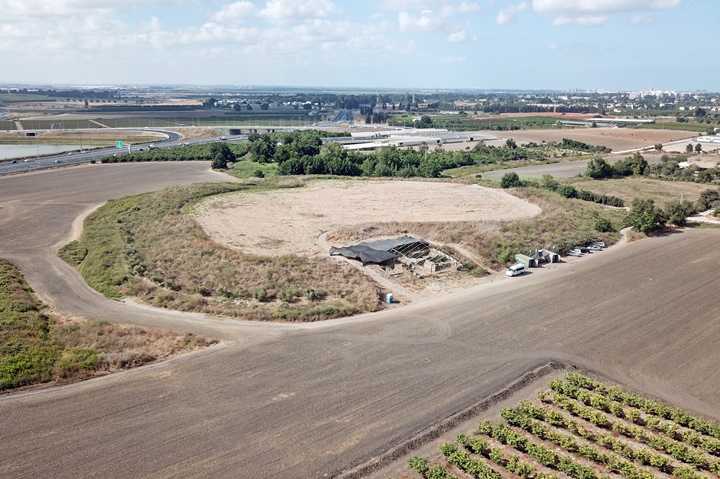 The following photo is from the north side, where the excavators unearthed a sloping tower and the city wall. 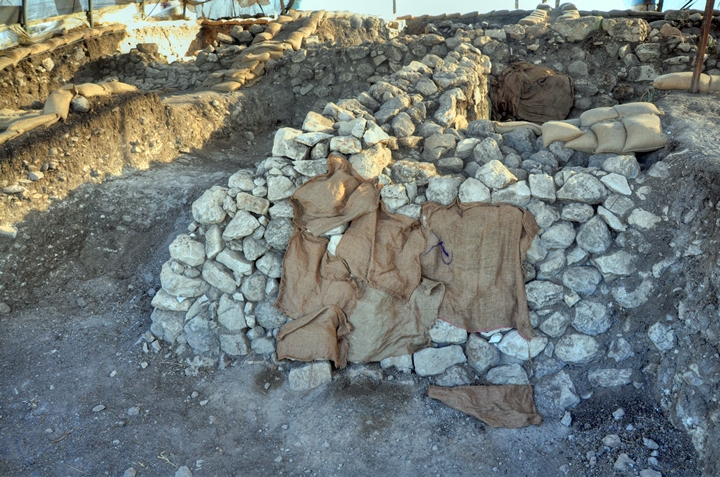 Other photos of area B: 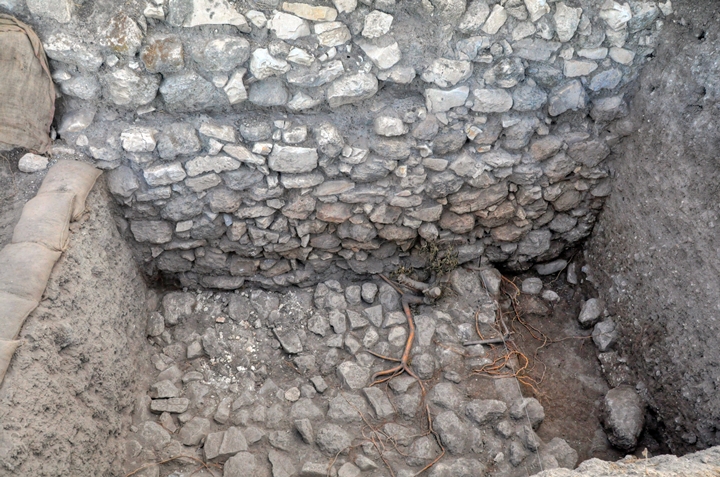 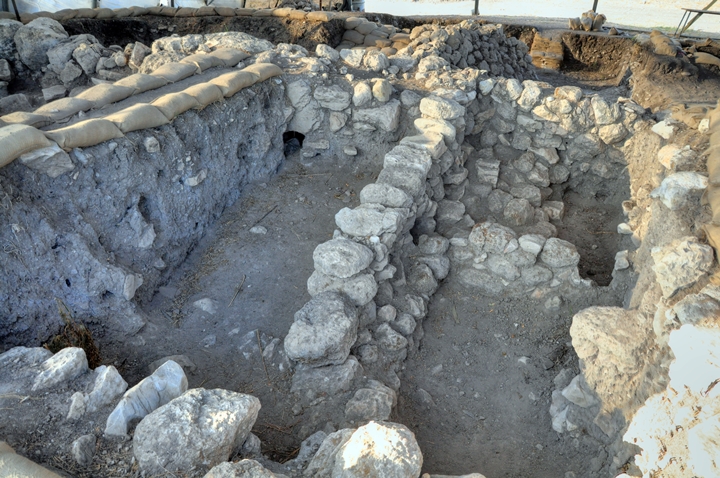 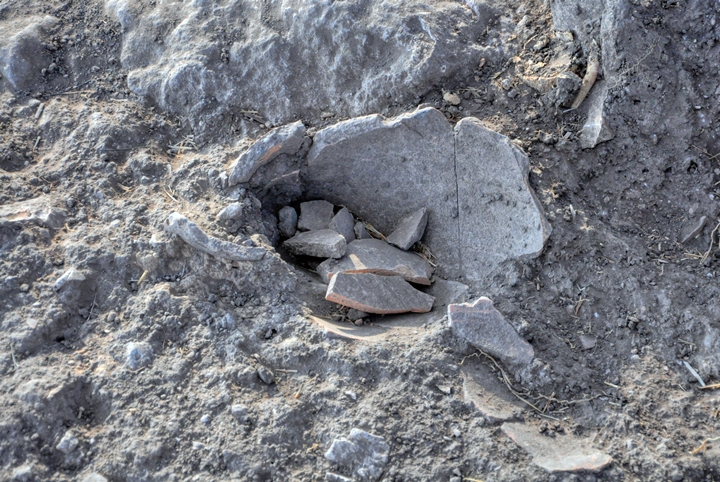 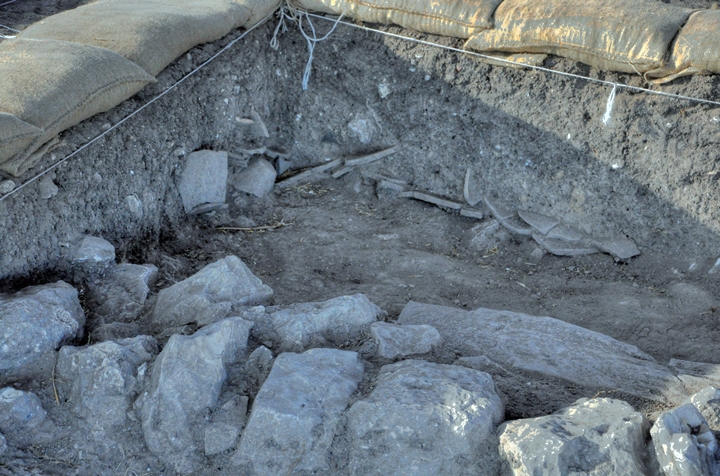 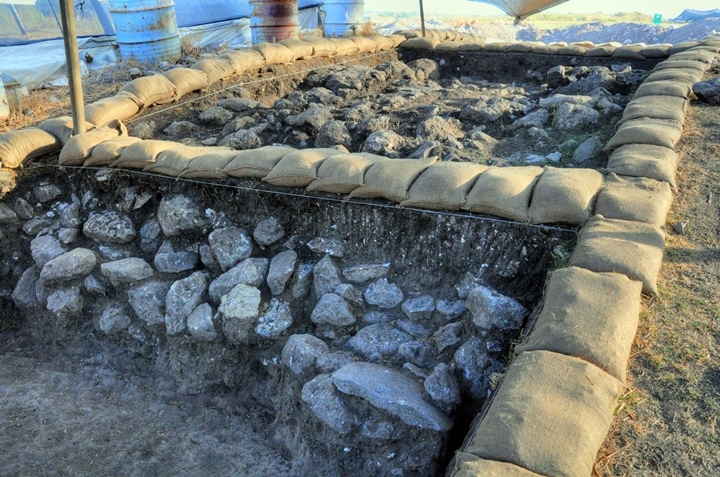 Area B1 was slightly west of area B. The excavators unearthed a Late Bronze IIA period building, with rooms around a central courtyard. This level was destroyed in the early 14th century BC.

Area B2 trench was opened west of Area B1, on top of the Tel.  The excavators found the western side of the sloping tower-wall of area B.

Area A was opened on the high, southern side of the mound. The archaeologists dated 8 levels: 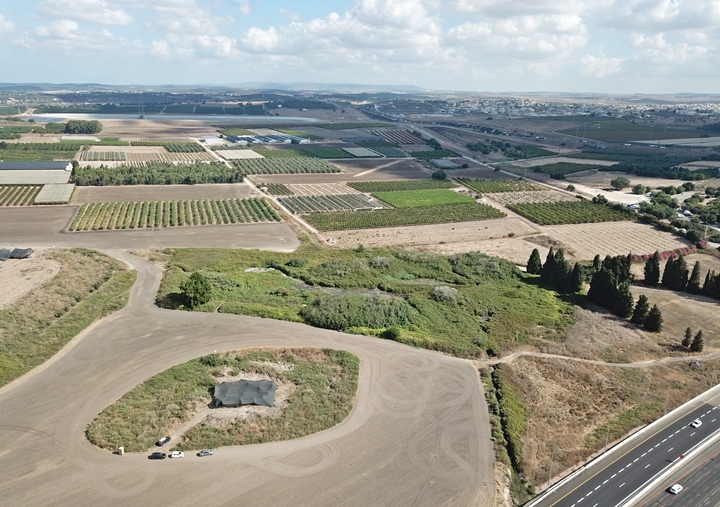 The administration center included office rooms (to the left of this view), storage rooms (seen below), and a 13 x 13m tower (which was exposed on the top right side). 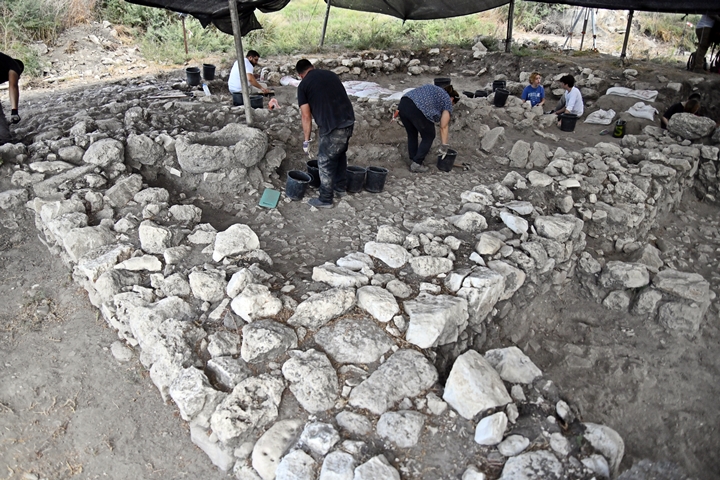 “He restored the coast of Israel from the entering of Hamath unto the sea of the plain…the rest of the acts of Jeroboam, and all that he did, and his might, how he warred, and how he recovered Damascus, and Hamath, which belonged to Judah, for Israel”. 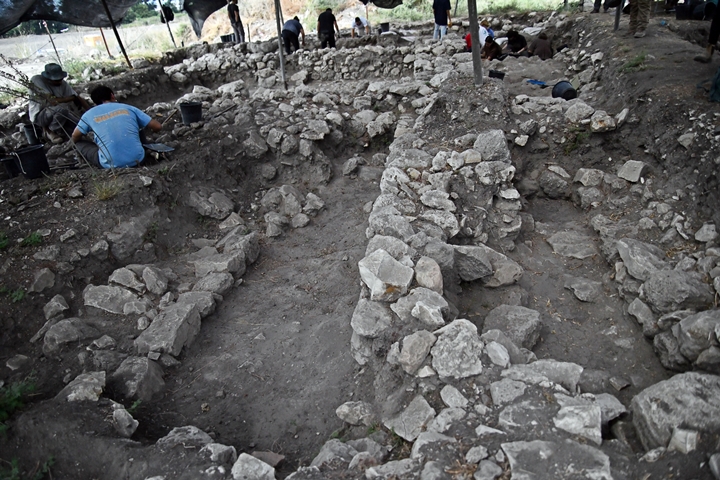 In preparations of constructing a new interchange on highway #65 near Tel Esur, an earlier settlement was exposed in 2016. The excavations revealed remains from the Pottery Neolithic, Early Chalcolithic and Late Chalcolithic periods, Early Bronze Age IA and IB. The city grew from 400 dunams (Neolithic period) to 647 dumans (Early Bronze 1B).

The “lost city” lies under Tel Esur and the fields around it, and mainly to the south across the highway and under the interchange. Its center was 220m south of the mound on a small hillock.

Two springs are located in the area of the Tel:

This aerial view from the east shows the greenery around Ein Esur. 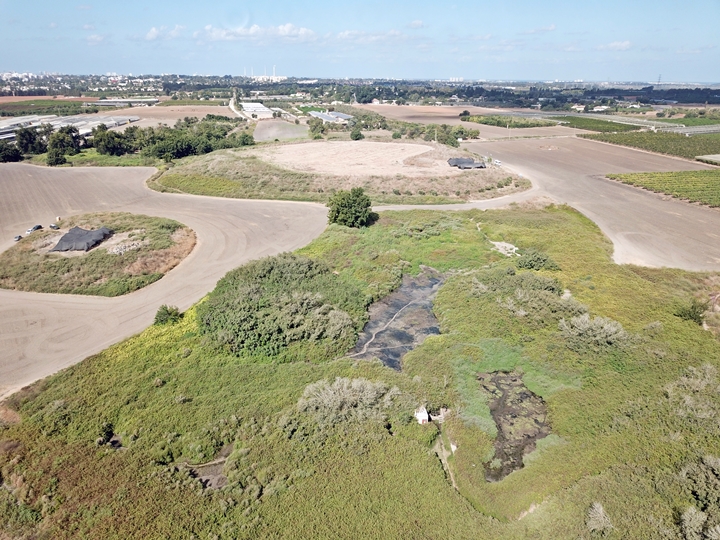 A lake forms around the Ein Esur spring. 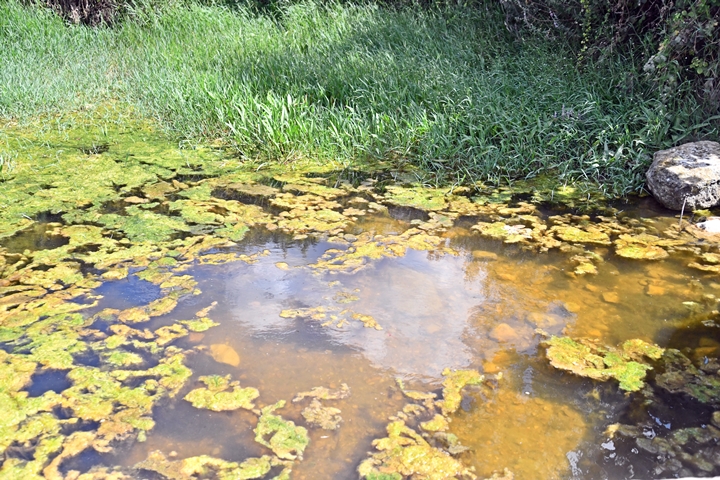 A modern spring house and dam were built in order to tap the waters of Ein Esur. 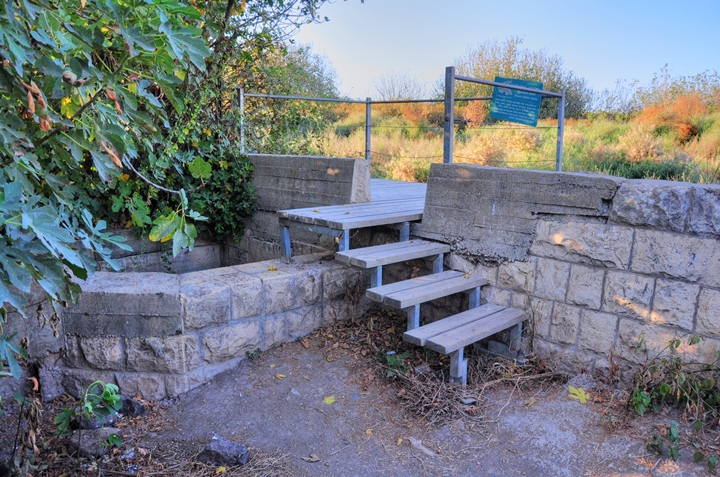 Around the springs are large areas of Rubus Sanguineus  bushes (Hebrew: Petel Kadosh), loaded with fruits. 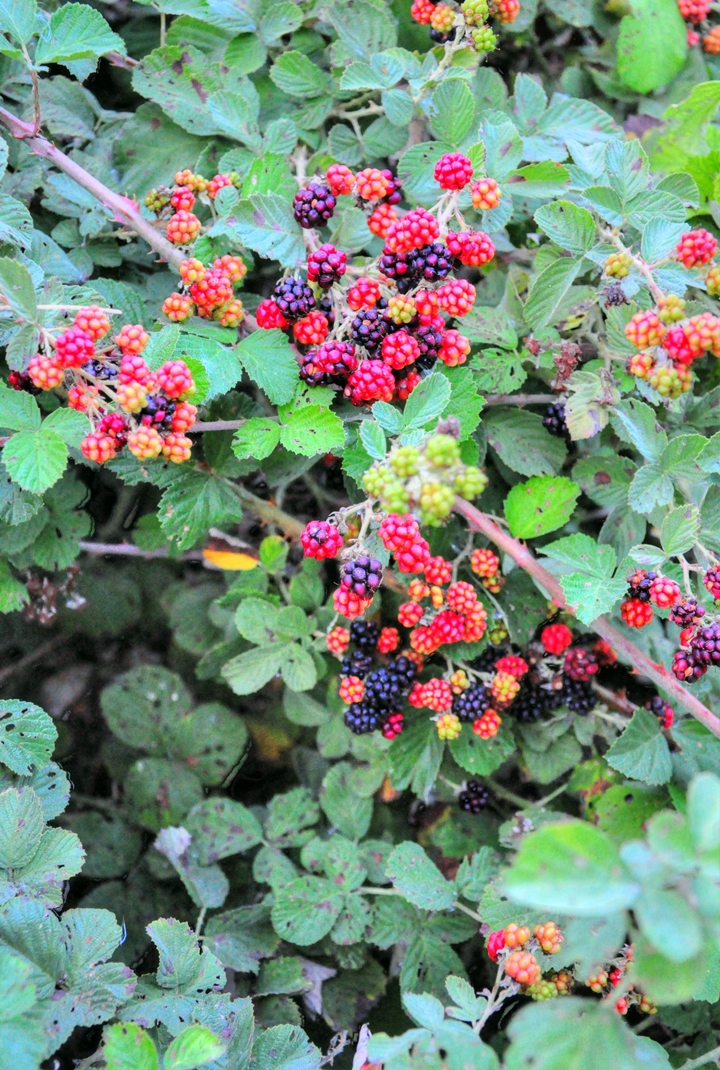 The Hebrew name of the bush is “Petel Kadosh” (Holy Petel) since tradition associates it with the burning bush of Moses (Exodus 3). 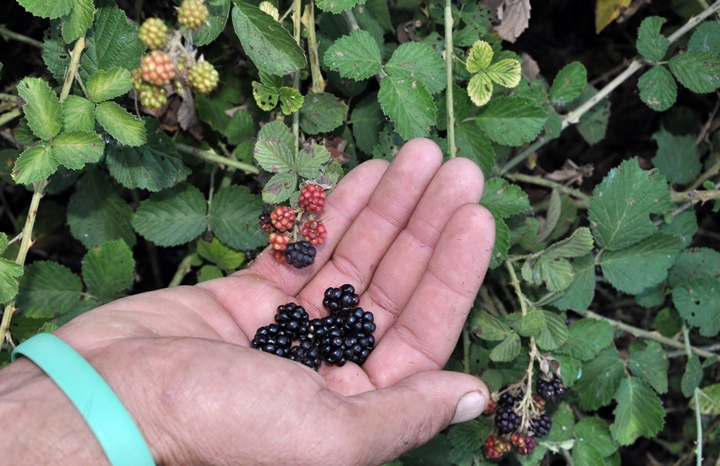 BibleWalks.com – “Have Bible will travel”