Ruins of a small Upper Galilee village, dated to the Roman/Byzantine period.  The ancient village is mostly hidden, covered by the bush and trees, but in a clearing on its western side is a group of Sarcophagi and a pool.

This aerial map indicates the major points of interest around the site.  Drive along a dirt road off highway #899, marked as “access road”, to a parking place near the site. A gate blocks the last 100m to reach to the foothills of the site. Walk from the gate along the dirt road until you find a narrow trail, barely marked, that ascends to the ruins. 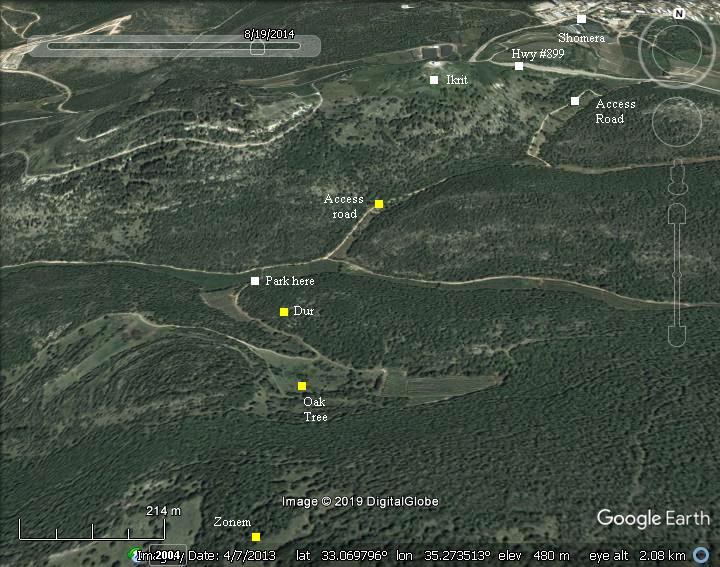 The site was inhabited during the Roman and Byzantine period.

A Byzantine monastery was probably located in the village, and named by the Arabs as Deir Basta (also Deir Busta).

The village was also inhabited during the Crusaders period. According to a suggested identification by R. Frankel it was known as Dere (or Deleha), part of the Lands of Godfrey le Tor (as per document RRH 624  of 1183 AD and RRH 934 of 1220 AD). Perhaps the Crusaders name was based on the Arabic name of a monastery (Deir) and was named Dere.

A British Mandate map of 1942 (Map 17/27 – Tarshiha – 1:20,000)  shows the area around the site, south of Iqrit (at that time it was an Arab village). The map shows that the site’s name is “Kh. ed Duweir” or “Deweir”, meaning in Arabic: the ruin of the little convent or circle. This name was translated in later maps to Hebrew as “Horvat Dur”, meaning the ruin of the circle (Dur in Hebrew is circle, round).  The map shows a pool (pond)  in this ruin. 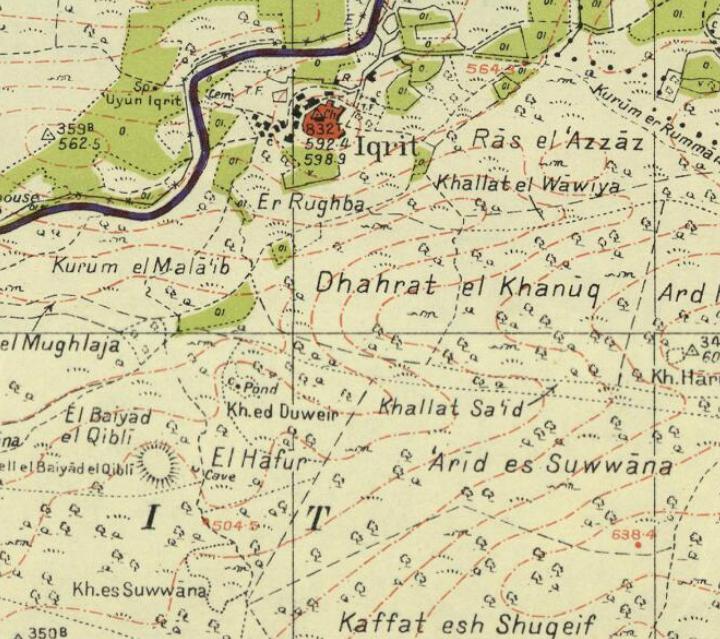 The site is in a public area, settled in an untouched nature area. We recommend to combine the visit to Horvat Dur with the nearby site of another “hidden city” – Horvat Zunam (kh. es Suwwana on the map above).

The road to Horvat Dur passes on the south side of Ikrit – a multi-period ancient city with a Church on the summit. 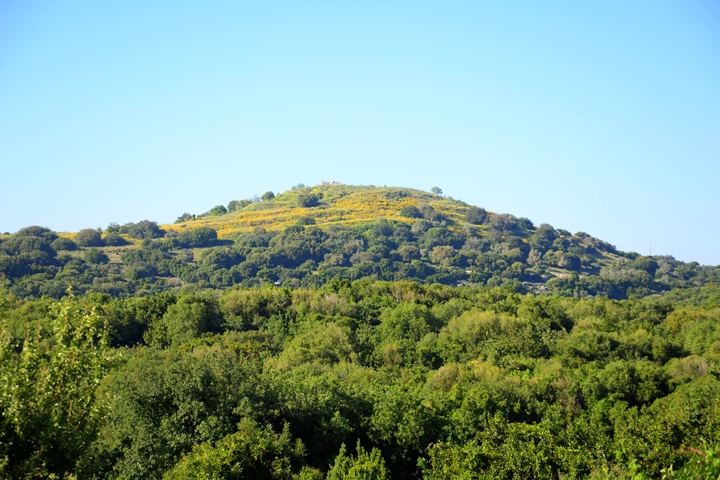 After driving south along a dirt road, the road ends with a gate near the hill where the ruins are scattered.

The ruins are hidden among a thick bush area. We barely noticed the entrance trail into the ruins, which is now marked by a pile of stones. 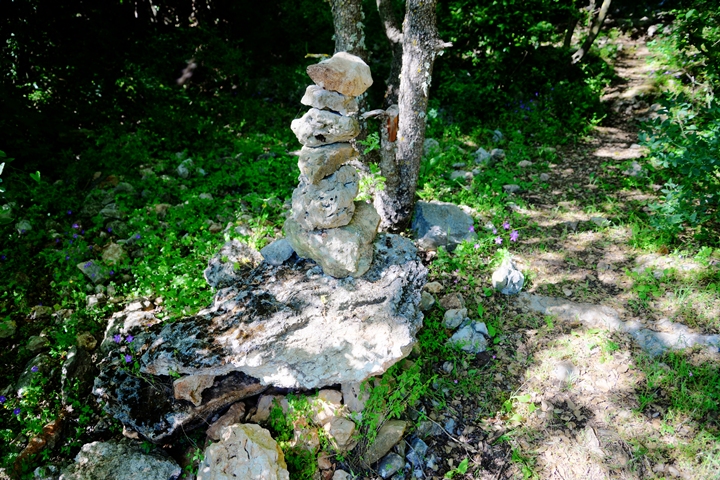 The highlight of the site is the row of sarcophagi (tomb coffins). This area, on the western foothills of the ancient village, was probably the cemetery of the village. The coffins, dated to the Roman/Byzantine period,  may have been part of a mausoleum of a rich family. 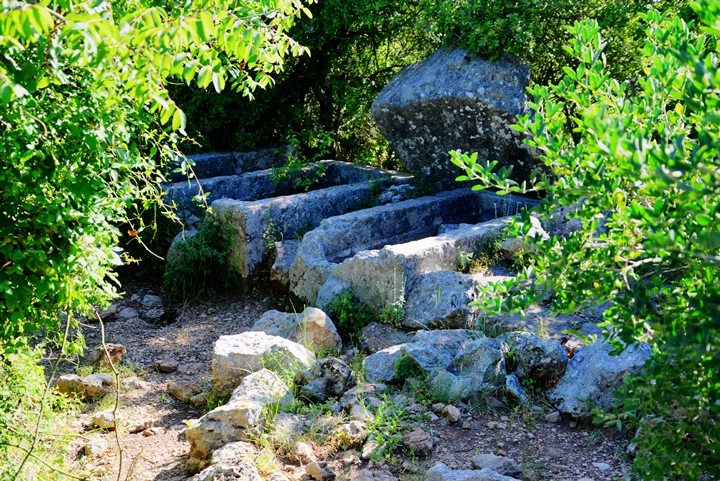 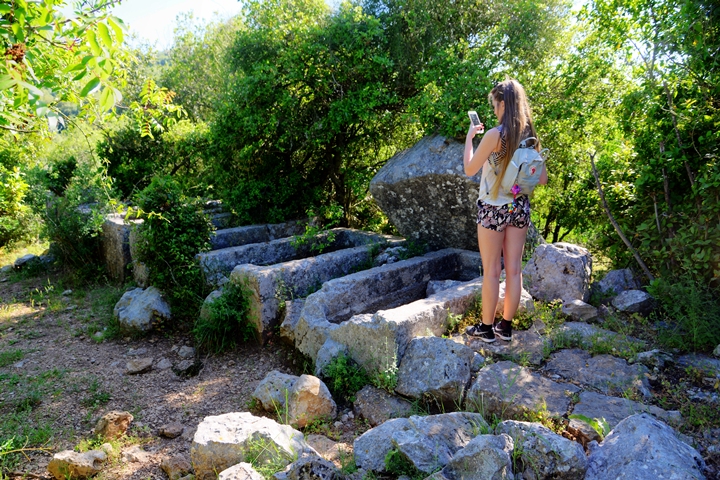 In the photo below – one of the heavy stone covers is seen at the back of the coffin. It was probably removed in ancient times in search for valuables. 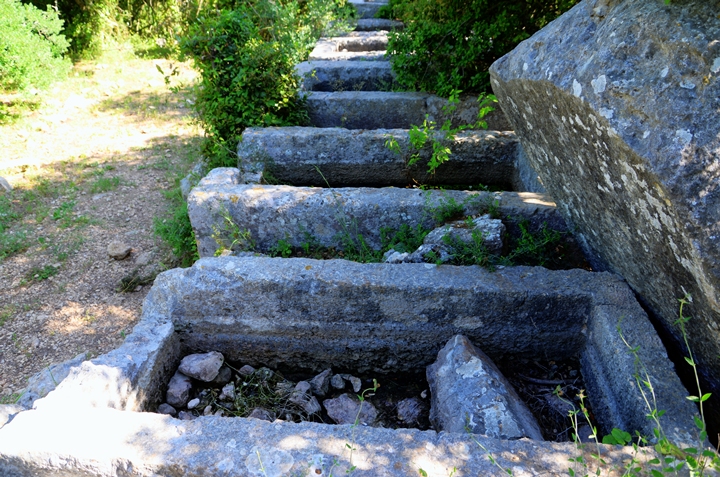 The coffins are standing over a paved surface.

In some of the coffins, such as this one below, there are holes that were smashed in the past by grave robbers. 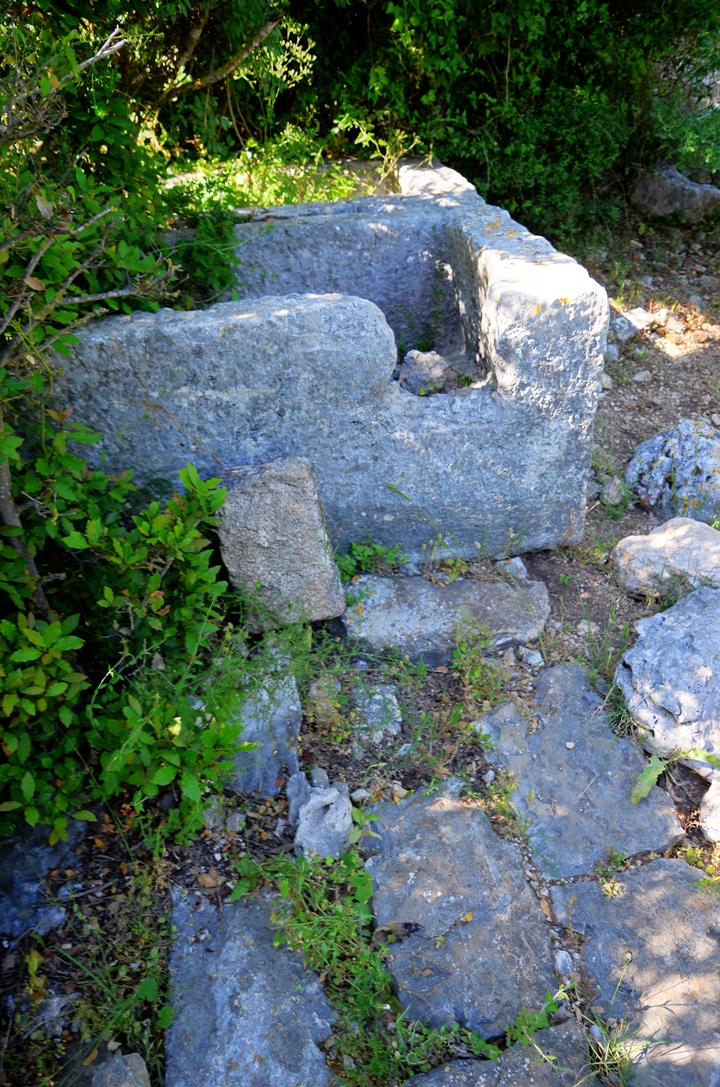 A side view of these 2 stone coffins is in the next photo.

In the area around Horvat Dur are two dozen sarcopagi, such as a pair in the northern foothills of Ikrit. 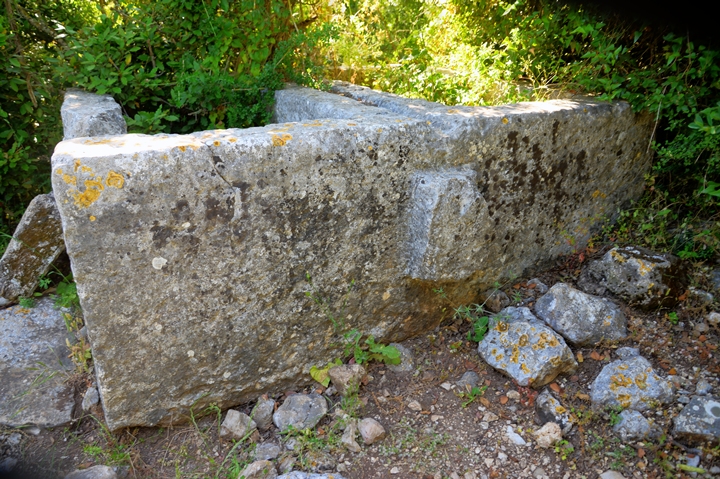 A large water reservoir is located near the stone coffins. This pool may have been the quarry where the sarcophagi were excavated. 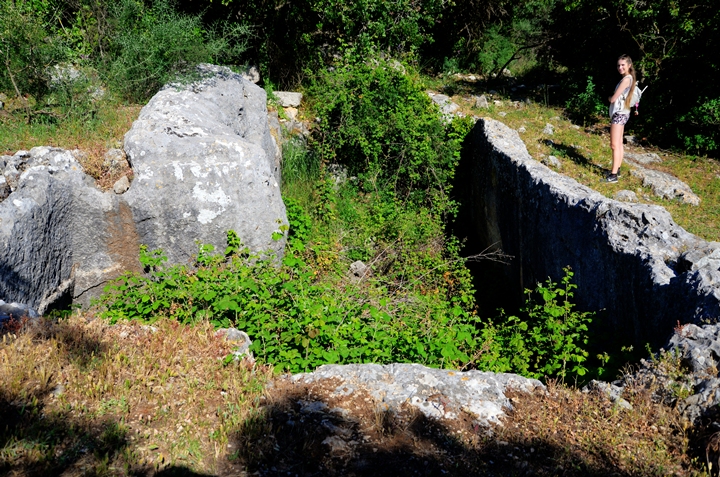 A staircase leads down to the bottom of the pool.

The water still fills up the bottom of the pool, after the unusually wet winter of 2018/9. 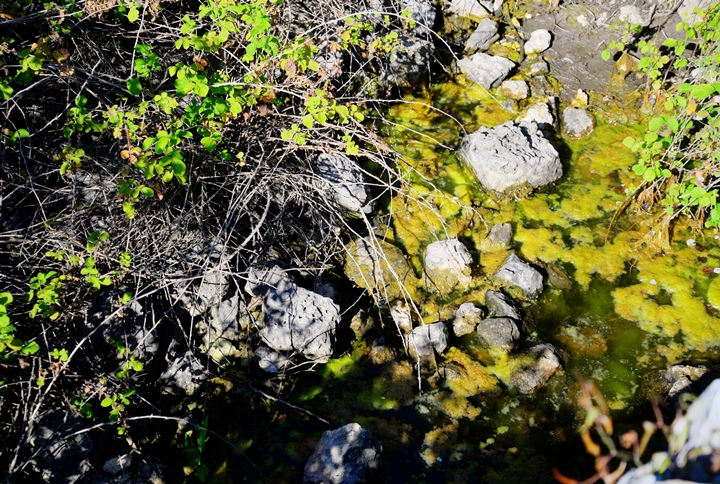 Near the sarcophagi is an agriculture installation – a winepress. 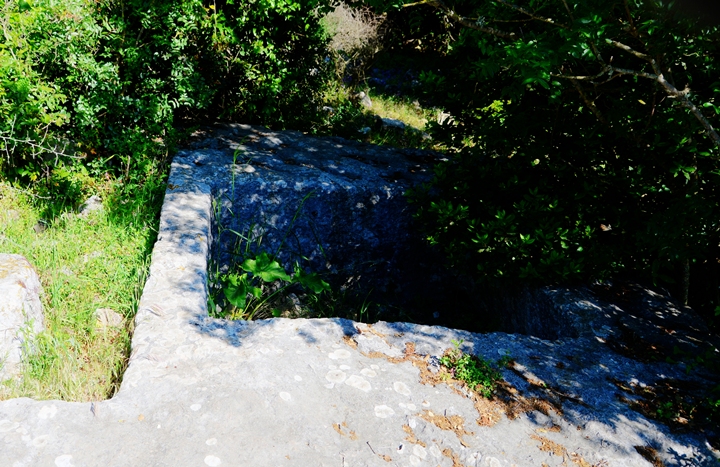 A path leads from the ruin towards the south east, on the way to Kh. Zunam – another “hidden city” worth visiting. 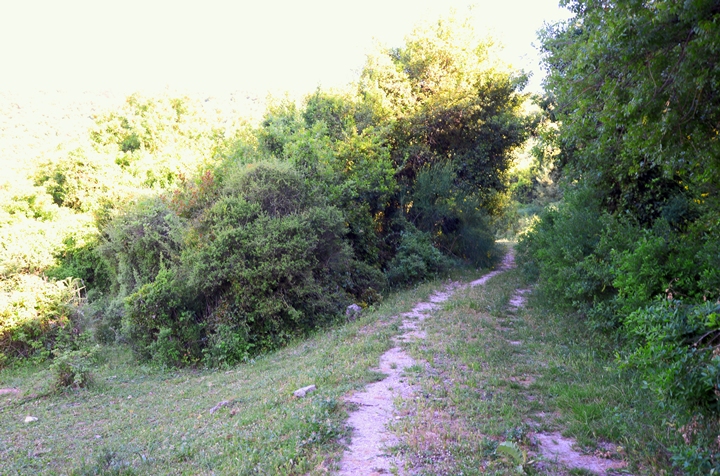 A giant ancient oak tree stands on the side of the path. The tree is of type Quercus calliprinos (common name: Palestine oak, Hebrew: Alon Matsui). 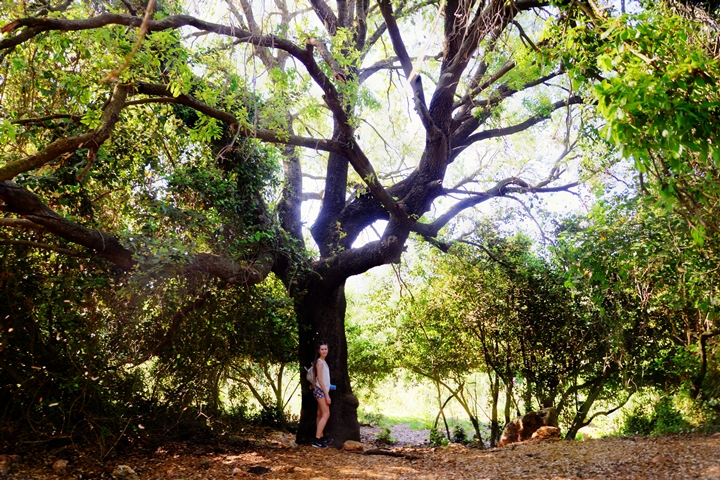 The trunk of this old tree is roughly 85 cm wide, and the height is about 20m.

A great place to rest and drink a cup of coffee… 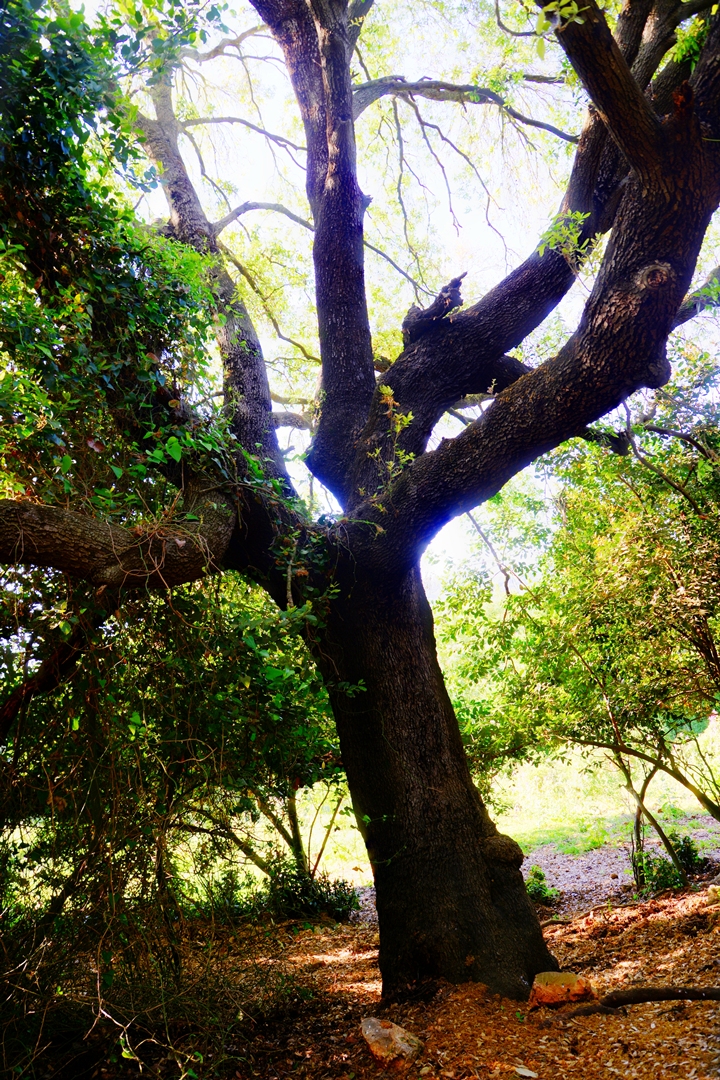