This web page focuses on the Canaanite (Bronze age) city in Tell Dan – the Biblical city of Laish/Leshem.

This page focuses on the remains of Laish (also: Leshem), the Canaanite city in Tell Dan.

Genesis 14:14: “And when Abram heard that his brother was taken captive, he armed his trained servants, born in his own house, three hundred and eighteen, and pursued them unto Dan“.

The following focuses on the Canaanite period, focusing on the time period from the 18th century BC up to the 12 century BC. For a full history – check the overview page.

Tell Dan was first settled starting from the end of the Neolithic Age (5th Millennium BC).  In the Early Bronze age II (2700-2400 BC) the settlement increased to a size of a city.  In the 20th and 19th C BC the city was under the rule of the Egyptian kings  (12th Dynasty) . It is referenced in the late 19th C BC Egyptian enemy-curse clay tablets as “Hornab”.

The Canaanite city was heavily fortified in  the 18th C BC, and survived until the Iron (Israelite) Age in the 12th century BC.

The ancient city – named Leshem or Laish – covers a large area: the mount size is 200 Dunam (20 Hectares) and was one of the largest in the region. Its high walls were based on a huge raised  earth glacis that surround the  entire site. The style of these Glacis walls was Hiksos, an ancient Egyptian tribe based in the delta of the Nile, who dominated the region from 1720-1580 BC, and ruled Canaanite cities. The Hiksos design of glacis walls was used in several cities in Canaan, including Leshem/Laish.

This mighty city was located on the crossroads of major ancient trade routes and dominated the north side of Israel. Like the other great city in the north – Hazor – the city of Laish is mentioned in the 18th century BC texts in Mari (Euphrates river, Mesopotamia). The city is one of the cities that were conquered by Egyptian Pharaoh Thutmose III, just before the famous battle near Megiddo (1468 BC). This battle resulted in the defeat of the Canaanite coalition and started the Egyptian conquest of Canaan (which lasted for 350 years).

The city’s main gate was located on the east side. Its triple-arch entrance, made of sun-baked bricks, was reconstructed by the archaeologists. Since the gate was standing at the time of Abraham (about 15th century BC), who came here according to the Bible (Genesis 14:14), the gate is called “Abraham’s gate”.

The Israelites conquered and possessed the Canaanite city in the 12th century BC. The Bible writes about this (Joshua 19:47): “…the children of Dan went up to fight against Leshem, and took it, and smote it with the edge of the sword, and possessed it, and dwelt therein, and called Leshem, Dan, after the name of Dan their father”.

Note that the Israelite period is covered in another web page.

The 18th century BC Canaanite city had an impressive brick gate on its south-east side, 7m high, which was unearthed by the archaeologists. This is one of the unique findings in the Dan excavations, and a special protecting canopy covers it in order to prevent future damages to the ancient gate. 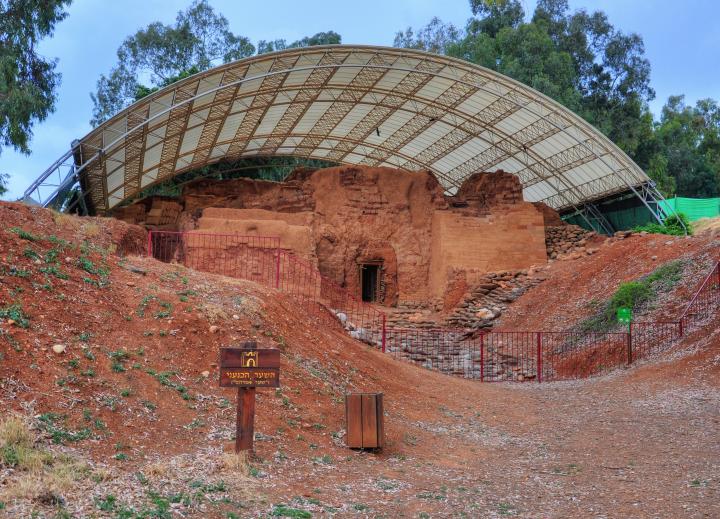 The photo below shows the front entrance to the city. A paved road leads up to the gate, which is located between two towers. The current opening of the gate is narrow, since it is supported by scaffolding fixture to prevent its collapse. 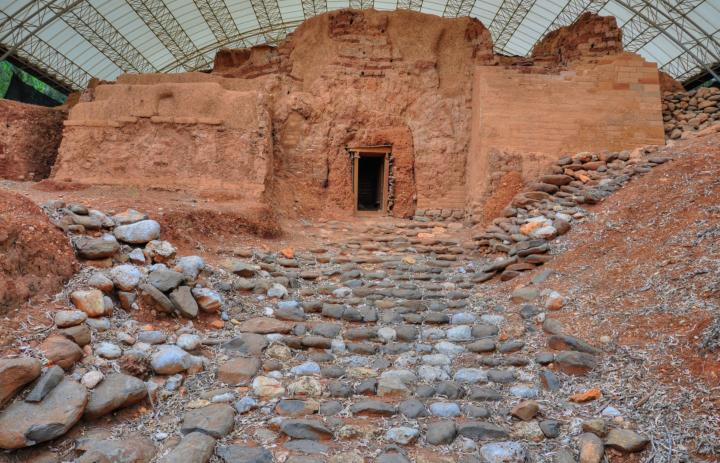 An illustration of the design of the triple-arch gate is shown here. The gate house is based on a series of 3 sequential arches which support the tower above the entryway. The entire height of the gate is 7m high. 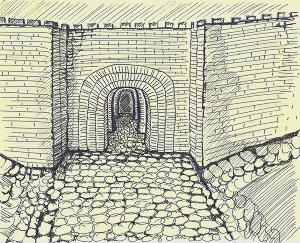 It is remarkable that the gate was preserved for so long – 3,800 years. Sections of the original structure, with 47 courses of the brick layers, are preserved. This was due to the great design, a novelty at those times, and since it was eventually covered by the Israelites and buried under the new defense walls.

Another view of the 18th century BC Canaanite gate is below. 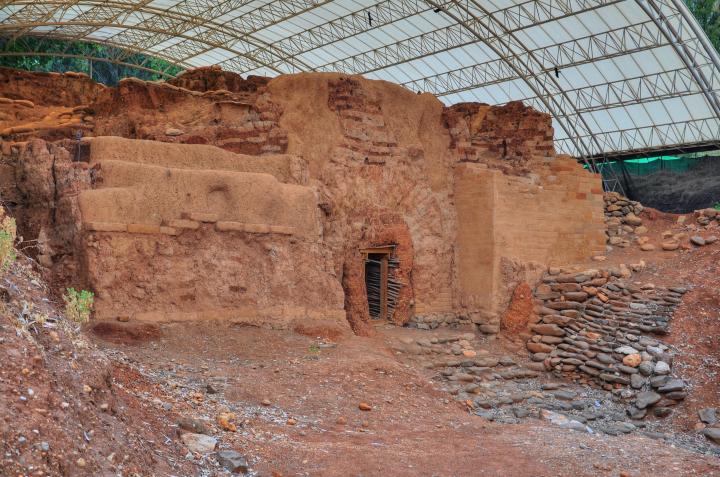 According to the Bible, this was the gate where Abraham passed during his pursuit against the North Kings (Genesis 14:14): “And when Abram heard that his brother was taken captive, he armed his trained servants, born in his own house, three hundred and eighteen, and pursued them unto Dan“.

A view from the top of the gate, looking down unto the entrance road: 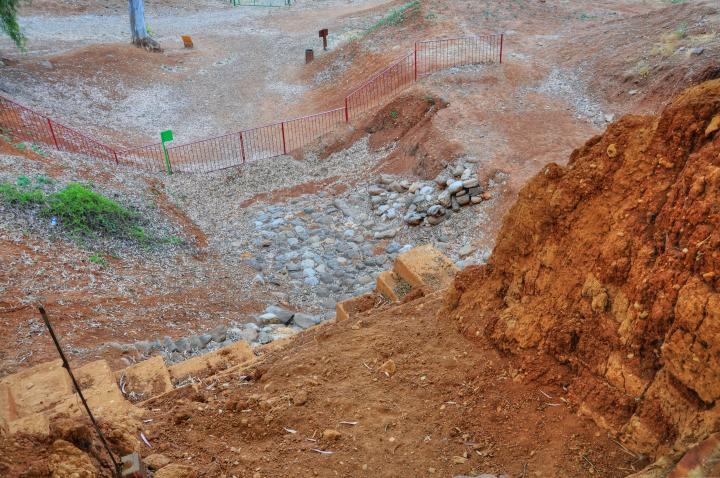 The external arch is better seen in the following photo. Above the scaffolding fixture is a filling, and above it is the bottom of the arch.

Behind the entrance are two more arches that supported the weight of the top of the gate. 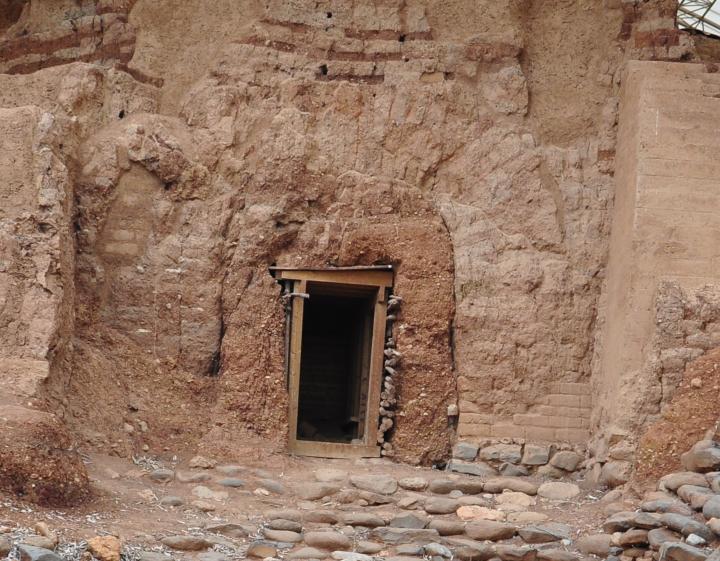 A detail of the top side of the arch: 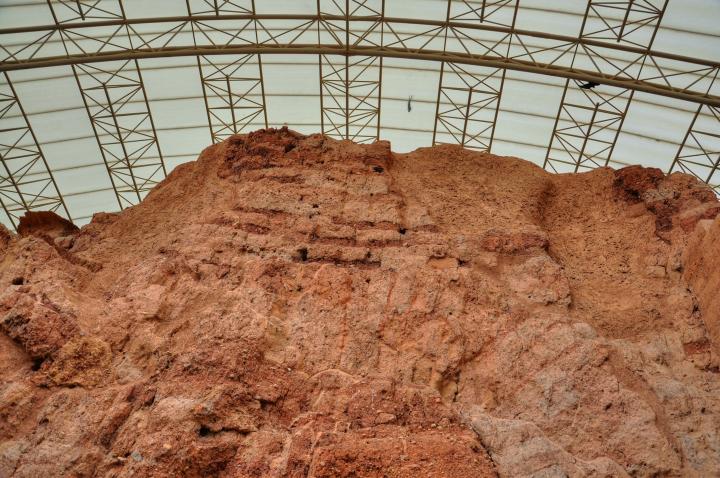 The tower on the right side of the entrance is shown in detail below. Like all the elements of the gate, it is made by sun-baked bricks. 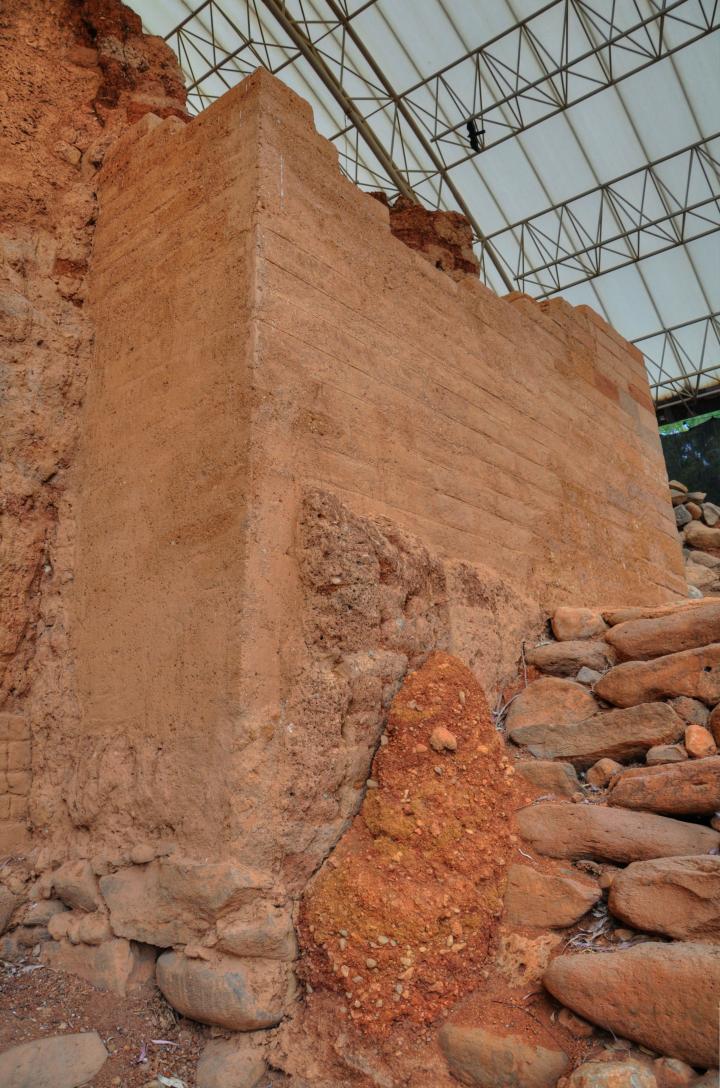 During the reconstruction of the gate, the archaeologists prepared similar bricks to fill in the missing segments. 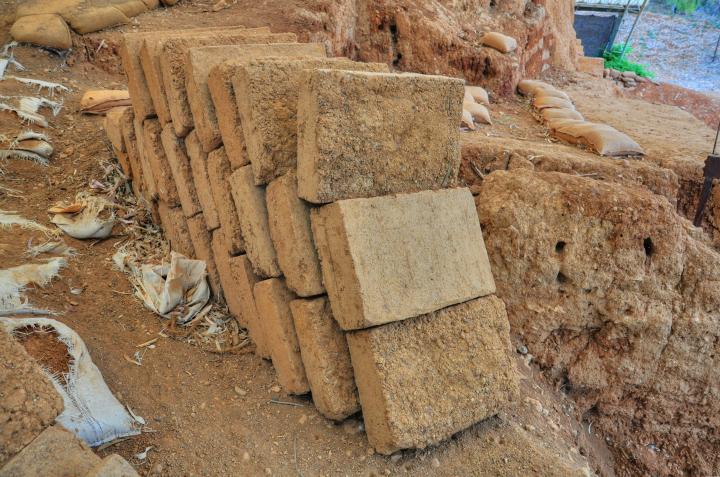 These bricks were prepared using the ancient techniques of placing the mud into a mold, then baking it in the sun: 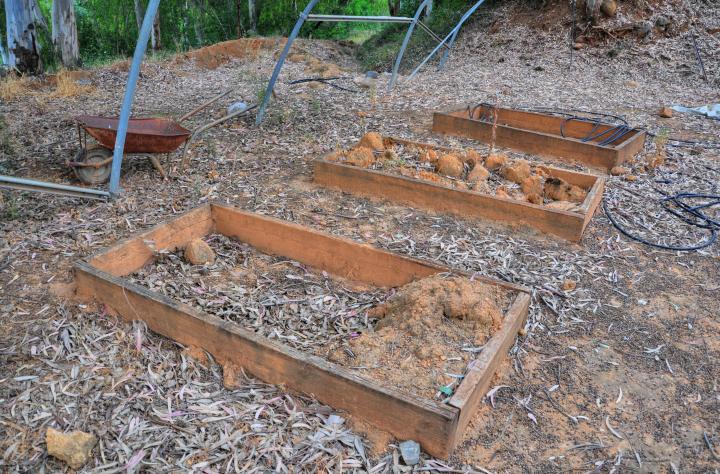 The new bricks were laid out in the gaps. A number of such bricks are seen along the front of the left wall. Future seasons will continue this work of preservation. 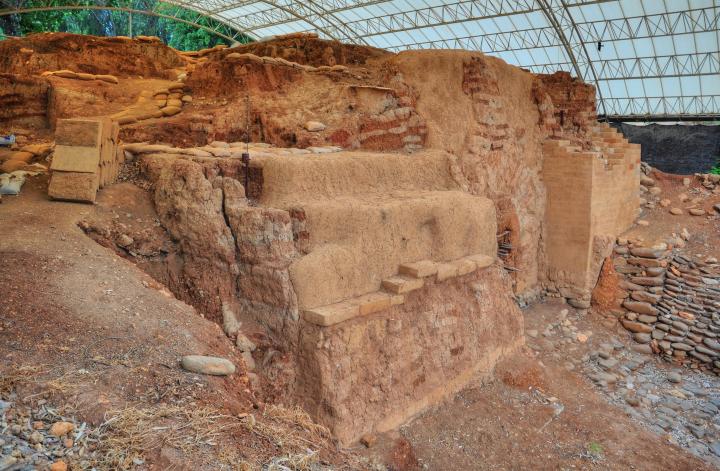 The Canaanite’s city, known in the Bible as Laish (or Leshem), was a huge city (50 acres). It was heavily fortified by high glacis walls (reaching 10-15 meters), surrounding the whole city from all directions, and is the biggest Tell (ancient mound) in the north part of the Hula (Heleh) valley. These type of defense walls are typical of Biblical mounds, but here in Laish/Leshem they were immense.  The style of these Glacis walls was Hiksos, an ancient Egyptian tribe based in the delta of the Nile, who dominated the region from 1720-1580 BC.

A section of the wall can be seen behind the gate. 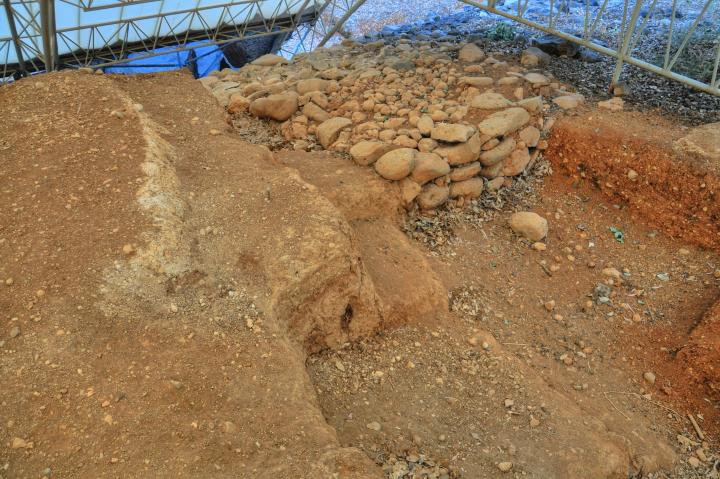 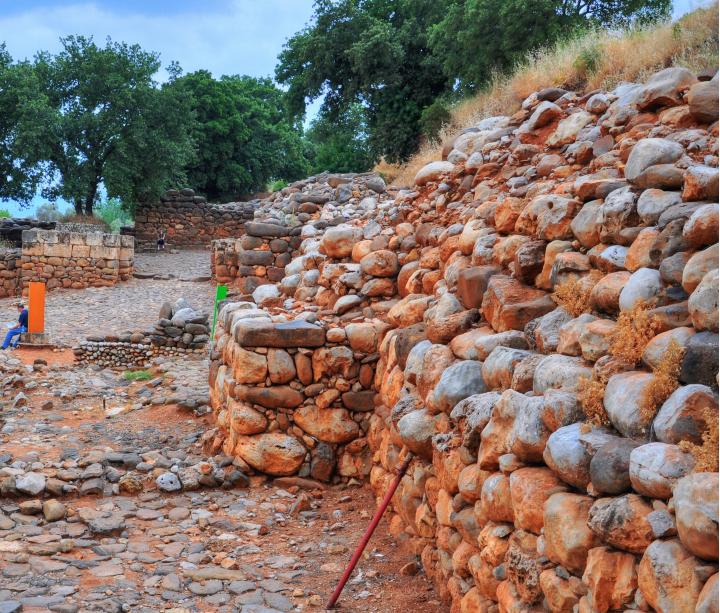 Inside the city are traces of ruins, in which the archaeologists excavated residential houses of the city dated to the Bronze (Canaanite) period. Above them, on a higher layer, were remains of the later Iron (Israelite) period. 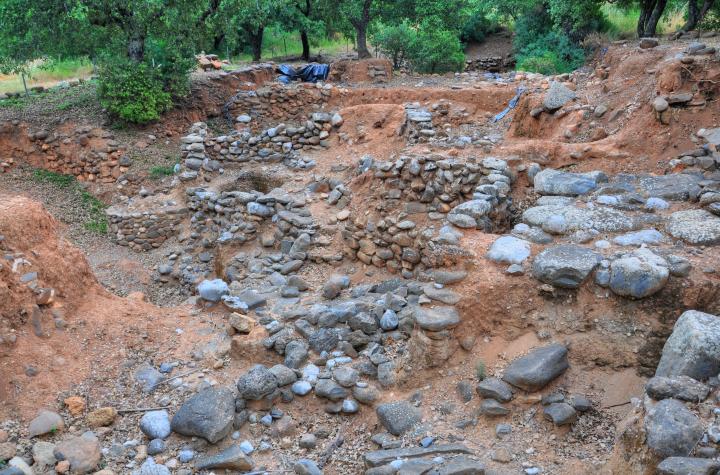 BibleWalks.com – Travelling with a Bible in the hand