A hilltop stronghold protecting the road to Jerusalem, constructed over the ruins of Roman and Crusader forts. Fierce battles occurred here in 1948 in an effort of the Israeli forces to open the road to besieged Jerusalem. Today – a National Heritage site operated by the Israel Nature and Parks Authority.

A hilltop stronghold protecting the road to Jerusalem. Fierce battles occurred here in 1948 in an effort of the Israeli forces to open the road to besieged Jerusalem.

The small Arab village that once occupied the hilltop, al Qastal, was constructed over the ruins of Roman and Crusader forts. It was demolished after the war and its ruins are scattered around the remaining structure. The remaining structure is the Mukhtar’s house on the hill top. Archaeological surveys have not yet uncovered the earlier fortifications.

The site is a National Heritage site commemorating the heroic accounts of the battles to capture and hold this strategic site, and the battles over the road to Jerusalem.

The following aerial view shows the area, with the Castel situated on the top of the hill (alt. 793m) overlooking the modern highway #1 to Jerusalem. The highway, now cutting through a tunnel under the Har’el junction, follows the path of the ancient route.

Entrance to the Castel national site is from the north west side. 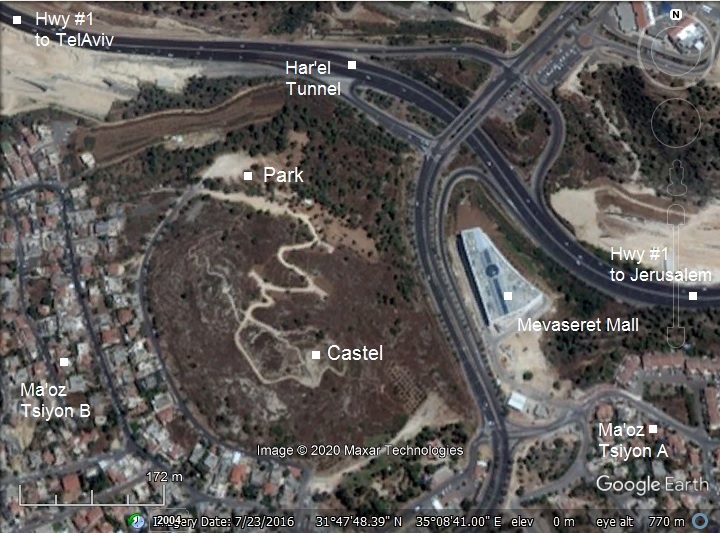 The Romans built a fortress on the hill, in order to protect the road from Emmaus (Nikopolis) to Jerusalem. It was known as Castellum. It means in Latin a small fort or tower.

The Crusaders arrived from Europe to the Holy Land in order to liberate the Holy Land and free Jerusalem. They accomplished the mission in 1099, and established the Crusader Kingdom. Then they began to construct fortresses along the borders, ports and main roads.

According to chronicles, a fortress was built here and named Castellum Belveer (fortress of a nice view). However, no traces of the Roman and Crusaders fortresses were found yet on the hill.

A small Arab village was built on the ruins. It preserved the ancient name – al Qastal.

The area around the site was examined in the Palestine Exploration Foundation (PEF) survey (1866-1877) by Wilson, Conder and Kitchener. A section of their map is shown below, with the site appearing here as Kustul. The road to Jerusalem is marked as a double dashed line.

The survey merely reported (Volume III, p. 18): “Kustul – A small stone village in a conspicuous position on a rocky hill-top. There are springs beneath the main-road to the east, about 1/2 mile from the village”. 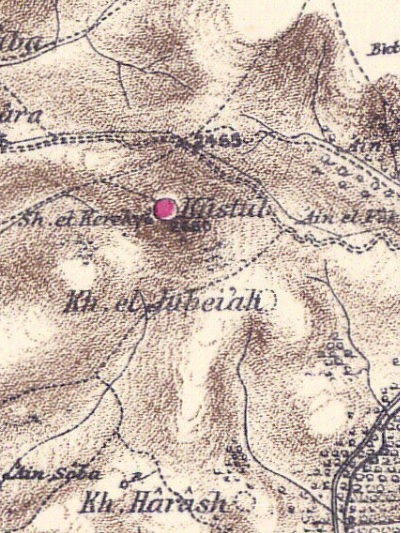 A photo of the road near Castel was captured in this aerial view in 1931. Al-Qastal, the Arab village occupying the hill, is seen to the left of the road to Jerusalem, above the serpentine section of the road. The sanatorium of Arza in Motza Illit is seen in the foreground. 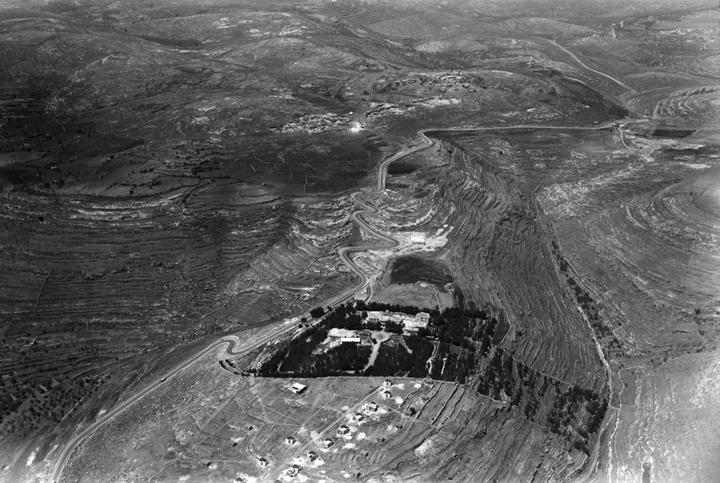 Photos of the Library of Congress, photo of American Colony 1931

Another photo shows the Castel hill and the village of al-Qastal from the ground level. At that time there were ~25 houses, but they were demolished after the war, except for the top most house. 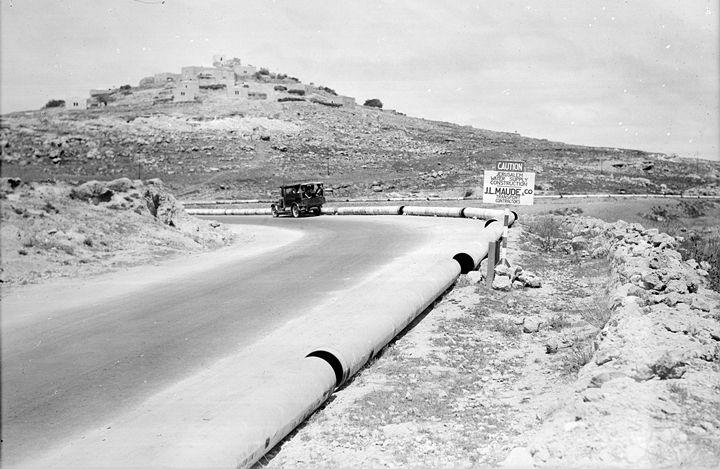 Photos of the Library of Congress, photo of American Colony 1934

On April 3 the village of al-Qastal were captured without a fight by the Jewish forces. The Arab irregular forces, led by the Palestinian Arab nationalist leader Abd al-Qadir al-Husayni, attempted to recapture the hill (April 5-7). The site was heavily bombarded causing massive injuries to the 70 Jewish defenders on the hill. However, the Arabs suffered a major setback after Abd al-Qadir al-Husayni was killed in the early hours of April 8 on the foothills while scouting the hill. This event pushed an Arab counter-attack on that day (April 8), killing most of the defenders, and the stronghold switched sides. However, on the next day (April 9) the Arab fighters left the hill to attend the grand funeral in Jerusalem, so the Castel was easily recaptured by the Jewish forces. This was an important win for the Israeli battle on Jerusalem, ensuring control of the eastern part of the road to the city. Its price was 49 soldiers killed and dozens wounded.

In years 1948-1967 the hill became a military post protecting the area against the Jordanian army. Communication trenches and bunkers were constructed along the foothills.

A national heritage site was established here. It is a recommended visit for families. The younger visitors will find interest in the hike to the top, and witness the heroic fight over the control of the hill.

In the center of the national park is the structure overlooking the area from the top of the hill. The structure was once the Mukhtar’s house of the Arab village until the Independence war.

This view is from the northern side, where a trail leads from the parking lot to the fortress. 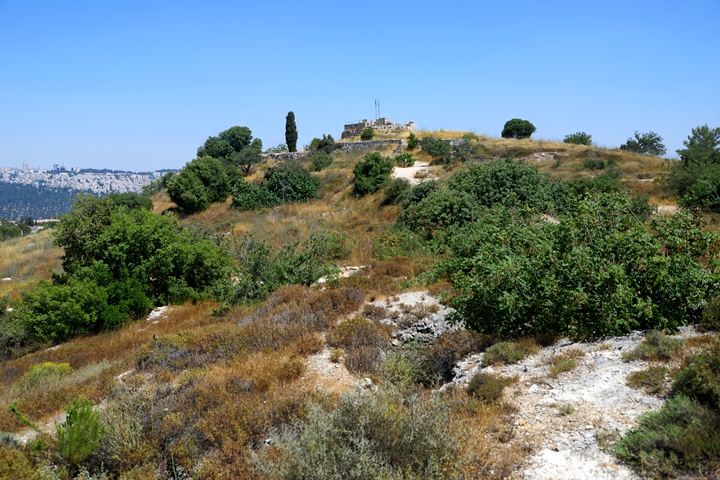 Next is a closer view from the north.

The small Arab village of al-Qastal was built on the hill top, and were the focus of the battles to occupy the stronghold overlooking the road to Jerusalem. Its 24 houses were since demolished, leaving only the top most house (the house of the Mukhtar – the head of the village) still standing. 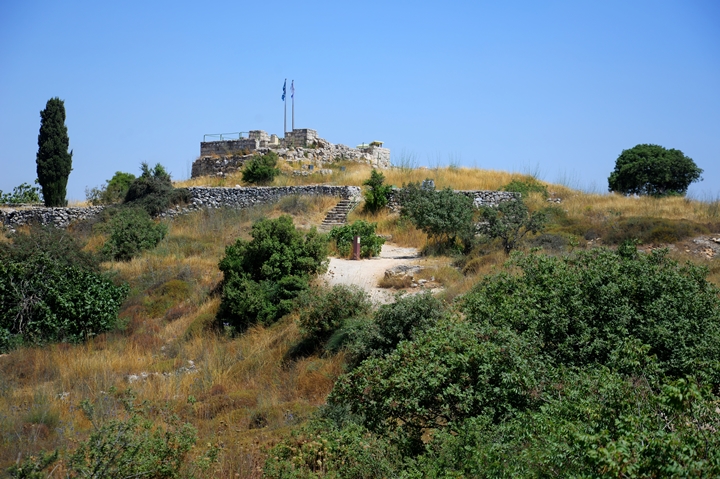 Around the hill are long communication trenches and bunkers. They were constructed after the Independence war, since in years 1948-1967 the hill became a military post protecting the area against the Jordanian army that occupied the areas around the road to the capital city. 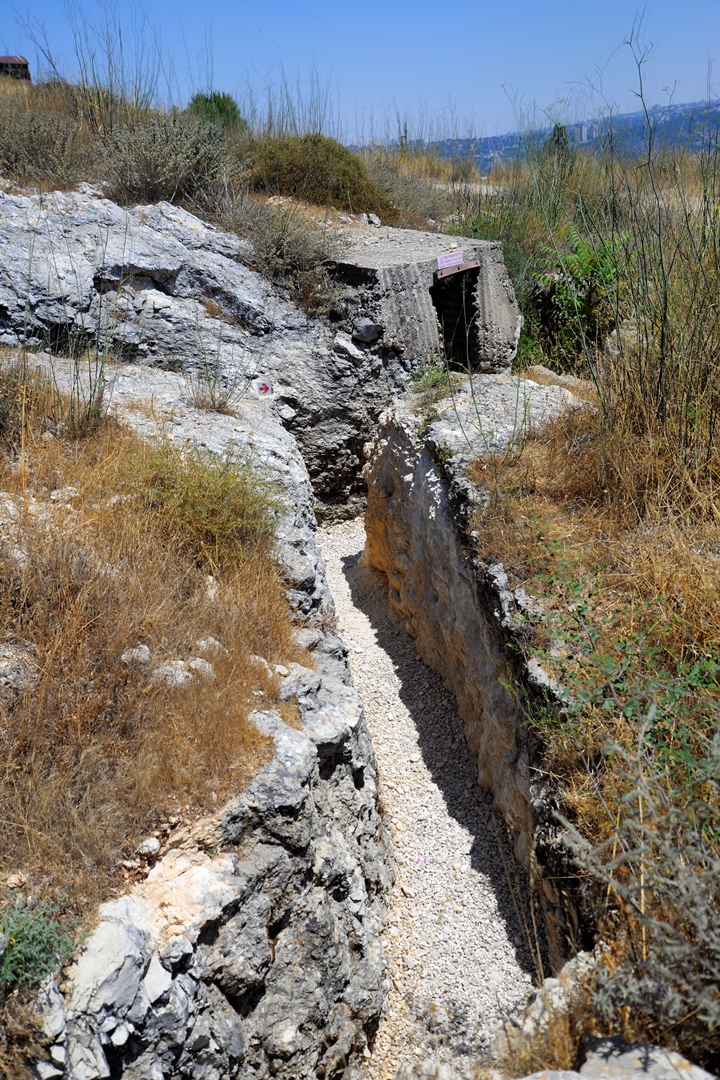 The trail ascending to the top of the hill passes through the trenches. 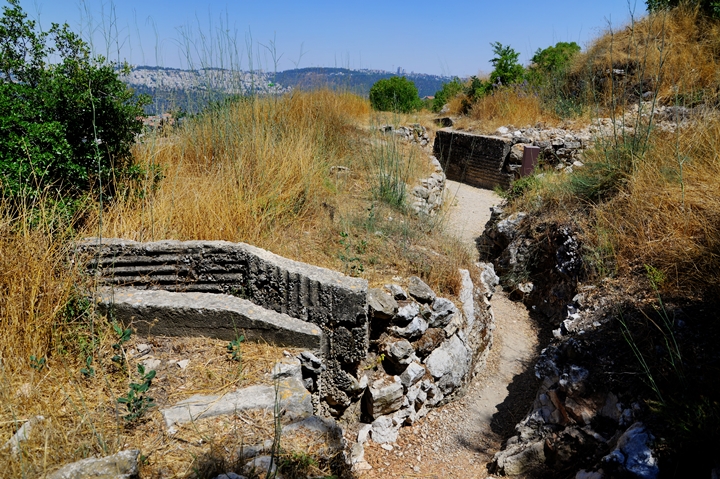 Some sections of the trail leads through the bunkers. 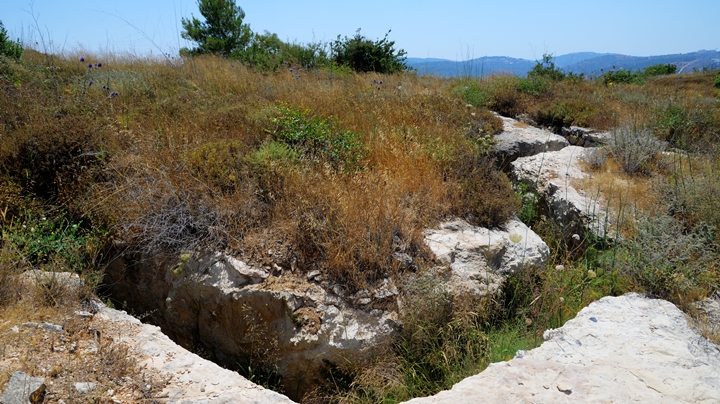 Inside one of the bunkers is a interactive station and the names of the fallen in the battles in and around the Castel. 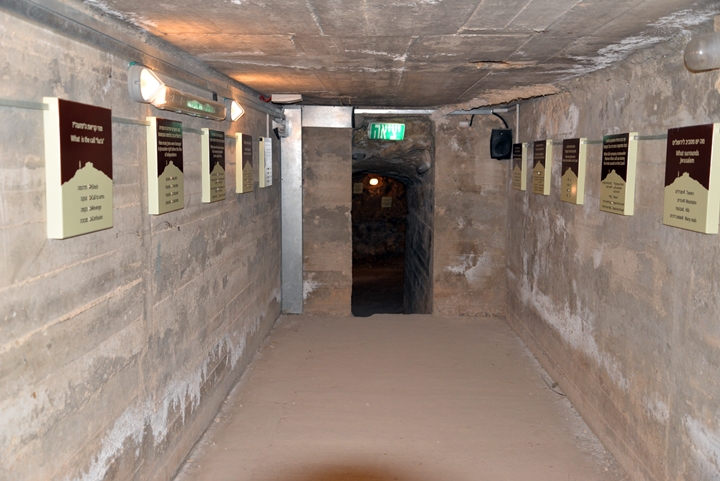 Another point of interest along the bunkers trail is an 11 minute film. It is shown inside an ancient cistern which was once served as the water reservoir for the village, a reservoir that collected runoff rain water.

The film features the battle of the Castel. At the time of our visit, during the Corona days, the cistern was closed and the film was shown down in the park visitor center. 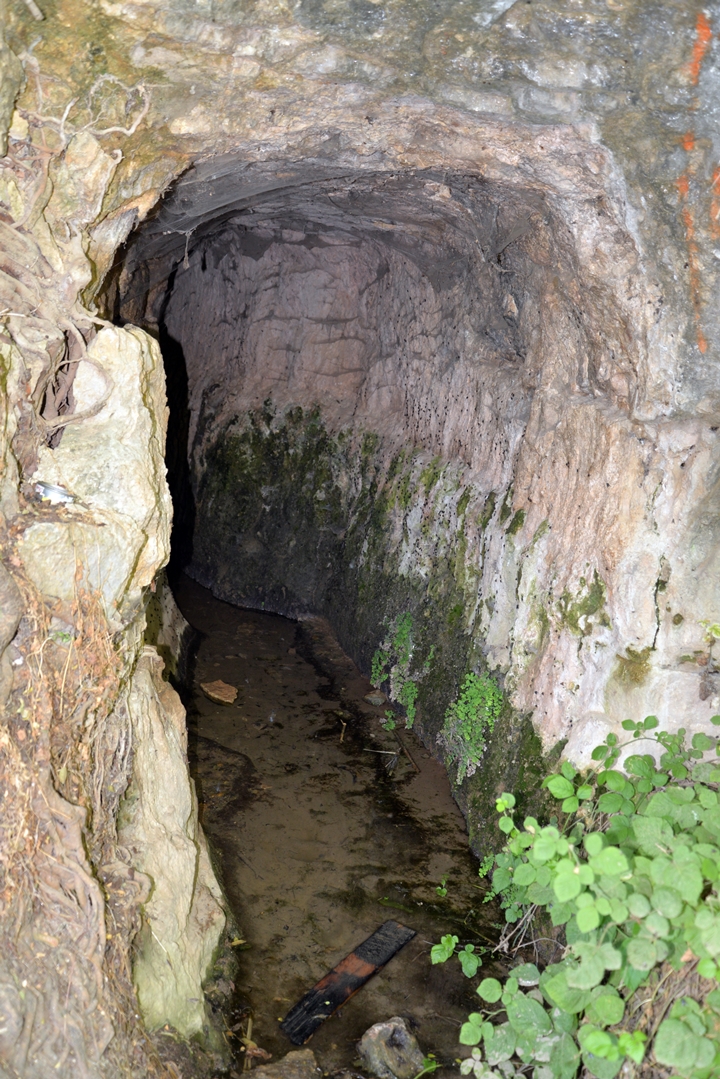 Remains of the Mukhtar’s house remains on the hill top, converted after the Independence war to be a military post. This view is from the south side.

The names of the fallen soldiers were carved on rocks on the hillside. 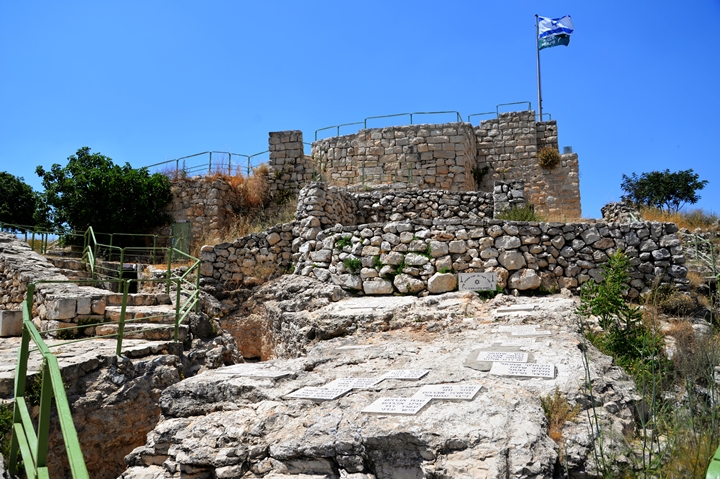 The next photo is a view of the hilltop from the east side. Two flags are waving on the post – the Israeli flag and the Israel Nature and Parks authority flag. 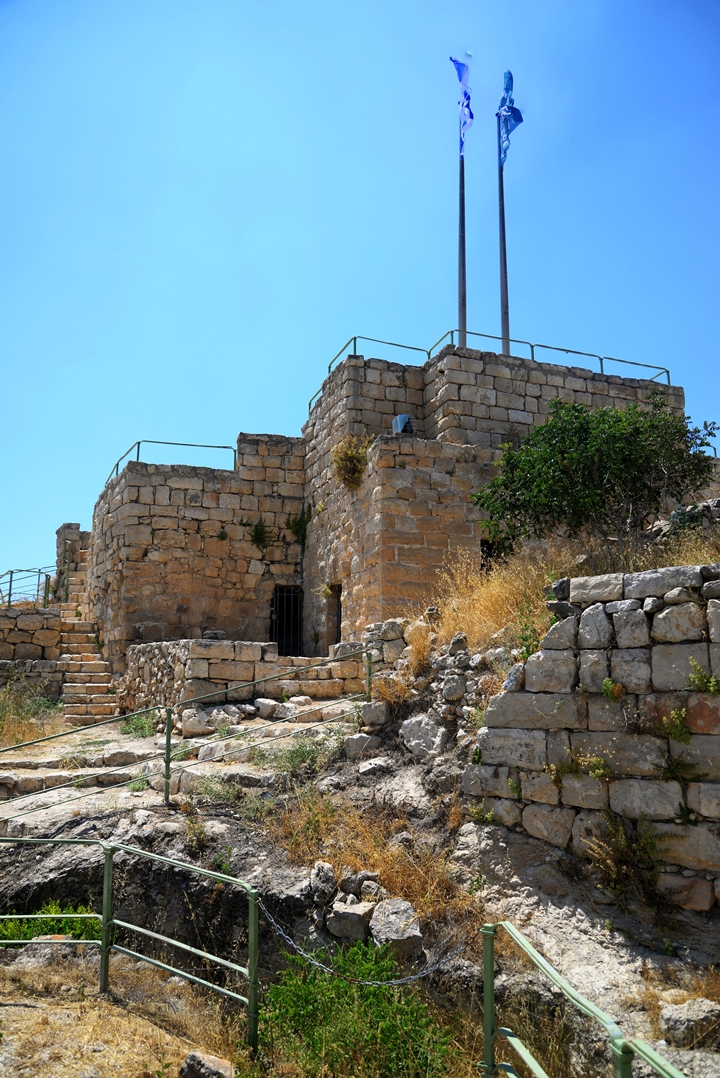 Next – A view of the lookout point on top of the roof. 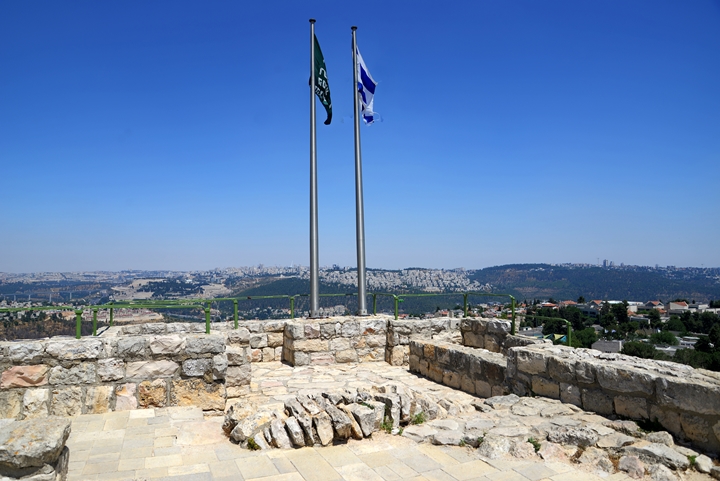 Yet another view from the north side: 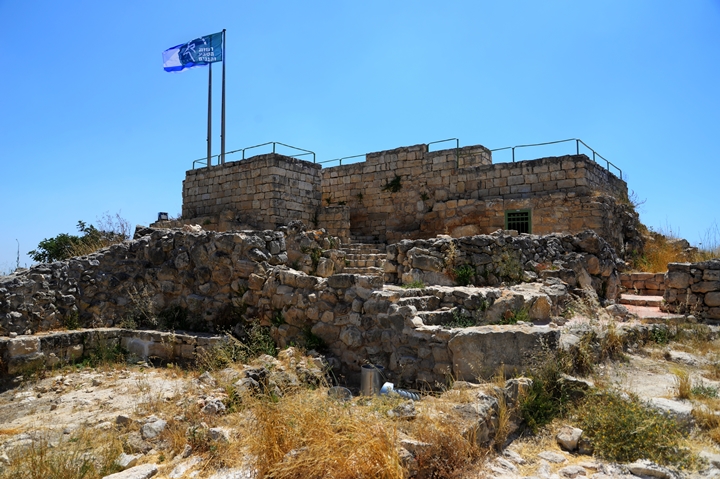 Along the ascending trail are resting places offering great views of the surrounding area. Additional educational instruments and installations were added along the trail. 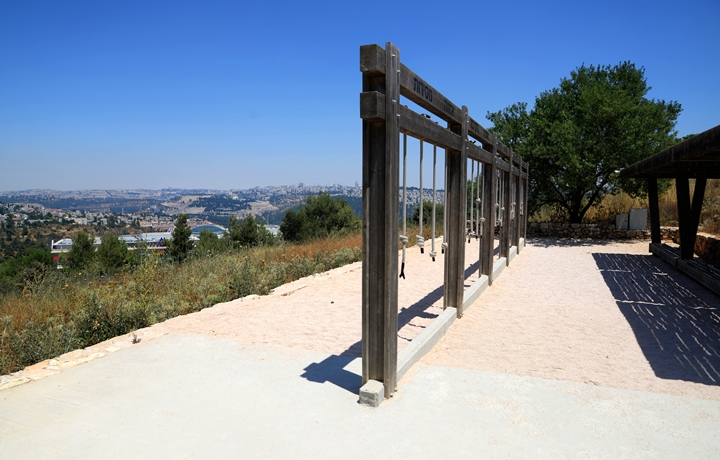 The following view towards the east demonstrates how strategic this stronghold served. The modern highway #1 seen on the bottom left side, is a section of the main road to Jerusalem just passing under a new tunnel that cuts under the northern side of the hill. It descends to the new Motza bridge, then ascends to Jerusalem which is seen in the far background. 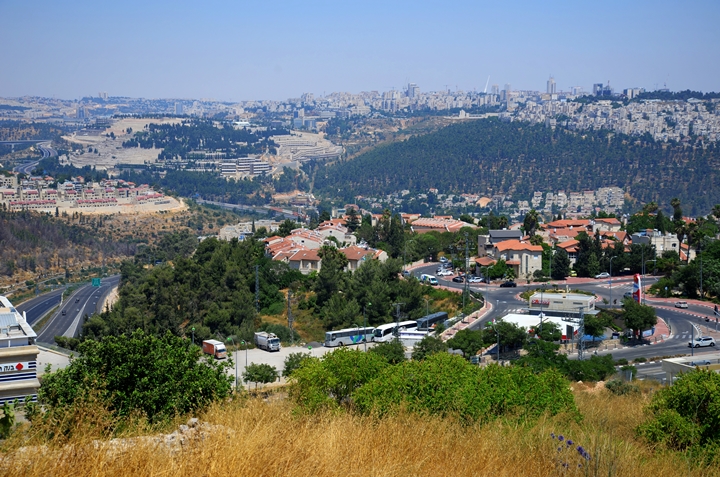 The next view shows the area north of Castel. The Har’el junction was once the route of the road to Jerusalem, but recently a tunnel was built under it as part of reconstruction of the highway to Jerusalem.

On the lower right side is the building of the Mevaseret mall. 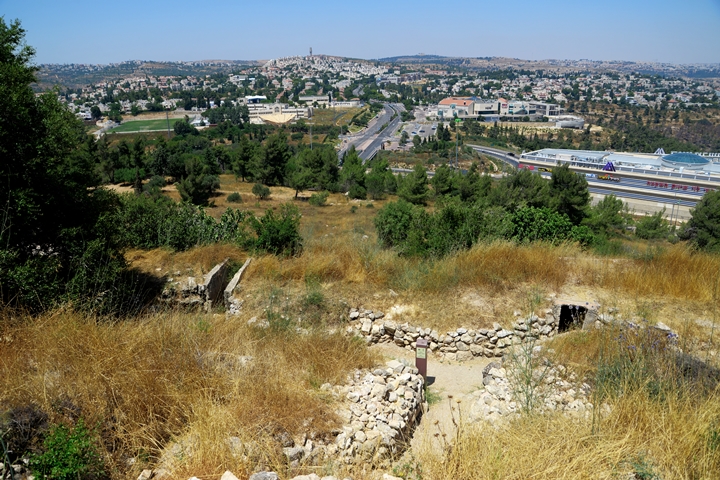 Another view is towards the south, with residential houses of Ma’oz Zion B. 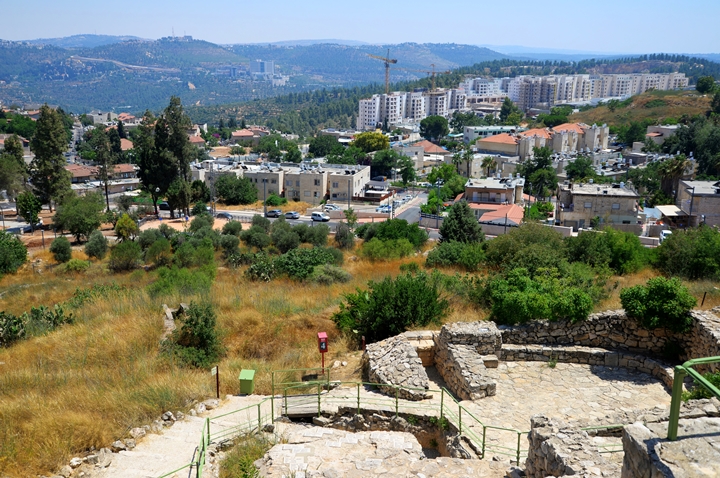 Another view towards the west is next.

A nature trail descends from the hilltop down to the park’s entrance and parking place. 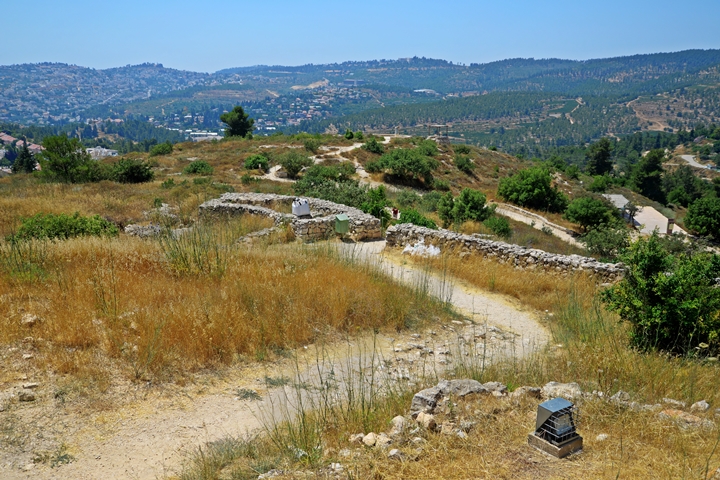 BibleWalks.com – travel with the Bible in hand