It is named after the nearby hot springs of Hammam el Maleh.

The fortress is placed in a very strong position, with a fine view of the Jordan valley and part of the Sea of Galilee. Its location allowed contact by fire signals with two remote Crusade fortresses in light of sight – Sartaba and Belvoir.

An aerial map is shown here, indicating the major points of interest around the site.

The ascent from the road to the summit is by a steep trail along the south east side of the hill. 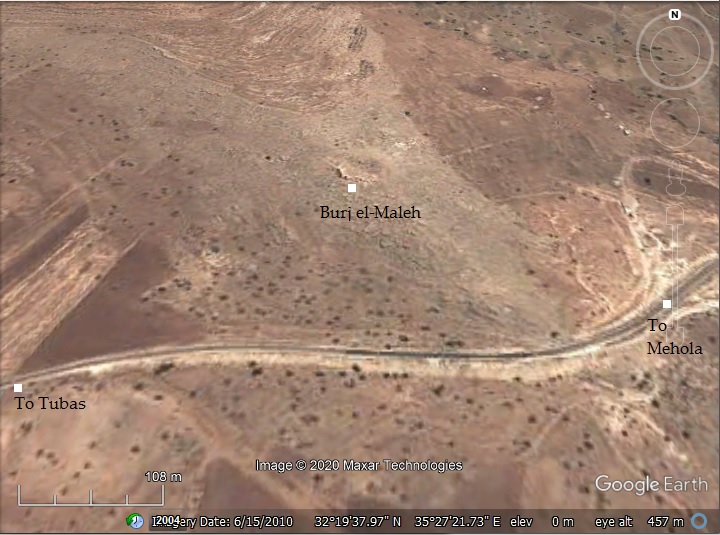 Two construction phases were observed by the survey team. It is not yet known if the fortress was first constructed by the Crusaders, although some of its stones have a characteristic Crusader shape. Furthermore, its Crusade name is unknown. Therefore, it may have been built  by the Mamelukes at a later period.

Judging from the layout of the structures, the fortress was occupied for a short time after it was constructed.

The area was examined in the Palestine Exploration Foundation (PEF) survey (1866-1877) by Wilson, Conder and Kitchener. This map is part of sheets 12 of their survey results. The site appears just above the route of the ancient road (the double dashed line). 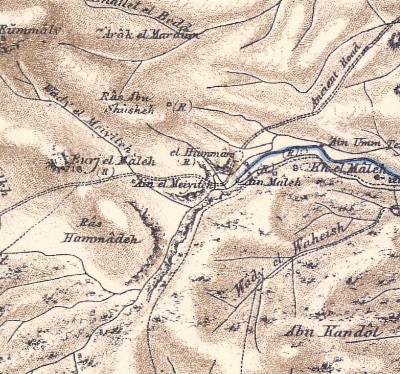 “Burj el Maleh (P n).—A fortress commanding the road down Wady Maleh, and placed in a very strong position, with a fine view of the Jordan valley and part of the Sea of Galilee, with a precipitous descent on the south-west. The area is included between a long curve on one side, and a wall with a slight salient angle on the south, the width north and south being 1 70 feet, and east and west at the greatest length 320 feet. The main entrance was to the north by a door with a pointed arch, and vaults of irregular plan appear to have been built against the outer wall on every side. The outer walls are 8 feet to 10 feet thick, but those of the vaults from 3 feet to 5 feet. There seems to have been a large tank in the centre of the enclosure. On the east there is a window in the outer wall. 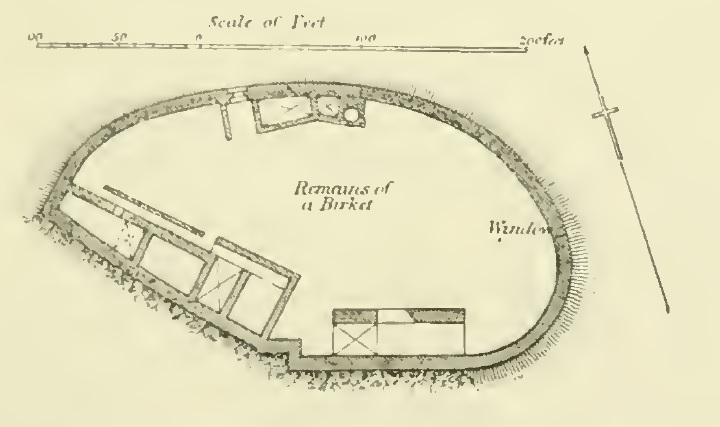 The masonry of the building is not of great size, and is rudely squared and ill-dressed. The corner stones in the walls are drafted with a rustic boss ; one stone was 2 feet 10 inches long, 1 foot 7 inches high, the draft 7 inches broad one side, 5 1/2 inches the other, 3 inches above and below; the boss projected 2 inches to 3 inches. A second stone was 2 feet 3 inches long, i foot 2 inches high, the draft 2 1/2 inches wide at top and bottom, 4 1/2 inches at one side, and 2 1/2 inches on the other. A third stone had a draft on three sides only.

The roofs of the vaults are of rag-work, and the arch of the doorway is also of undressed stones. Some of the roofs are almost triangular in cross-sections, with a sharp point. This building would seem to be one of the later Crusading structures, and most resembles the fortress at Talat cd Dumm.
– Visited and planned, April 2nd, 1874″.

This aerial photo was captured by the drone above the northwest side. The modern road to Tubas, passing thru Teiasir (Tayasir), is seen behind and below the fortress, along its south side. 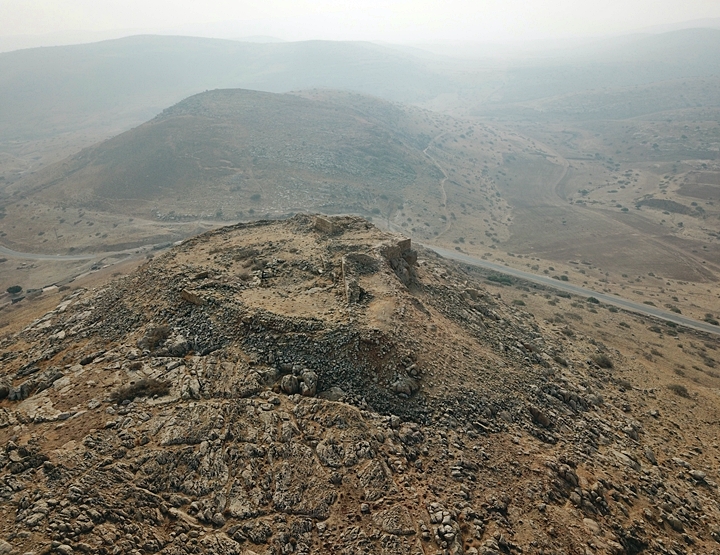 A closer view of these rocks are seen below.

The fortress is built on the summit of a limestone hill. The hill is geological dated to the Jurassic period (201-145 million years ago) – same as the rocks of Mt. Hermon and Ramon crater.  This is the oldest geological layer in Samaria, which surfaced at the end of this period due to the extreme tectonic changes brought by the Jordan valley depression. 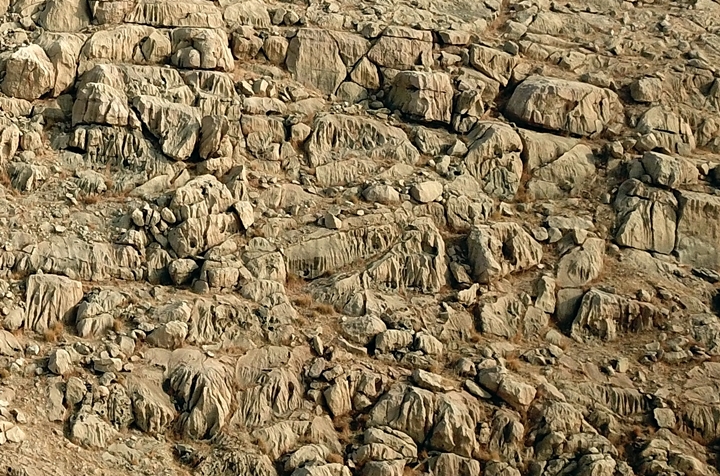 A closer view of the fortress is next.

The modern road below uses the same route as used by the ancient road that connected the Jordan valley to Tubas, Shechem and Northern Samaria. This route was also in use during the Bronze and Iron Age. 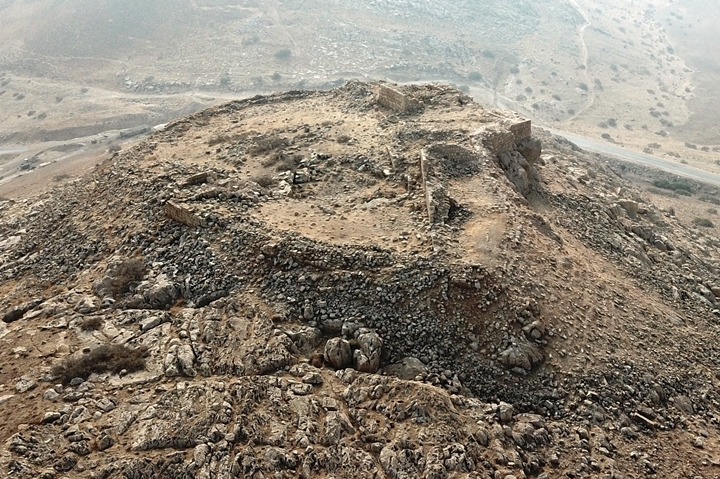 Burj el Maleh covers an area of 95m long by 50m wide on the summit of the hill. It is shaped like a boat, with an axis of NW-SE. A wall surrounds it, 2-2.5m wide. Inside the fortress are 5 cisterns, with the large one in the center. Along the south western wall are 6 rooms, while on the side of the gate are 3 rooms.

On the aerial photo we marked the major elements of the fortress: 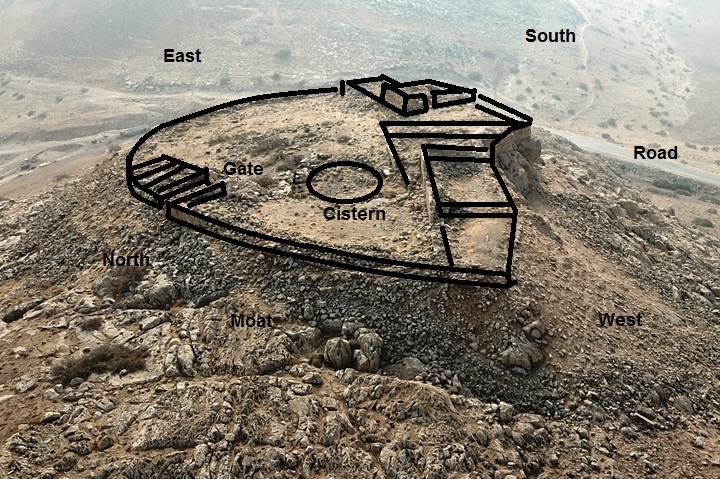 The fortress gate, 2m wide, is on its North side. A moat is cut into the cliff on the north side, west of the gate, as seen on the bottom of the illustration.

More aerial views were captured by the drone.

This view is from the south side, taken just above the road: 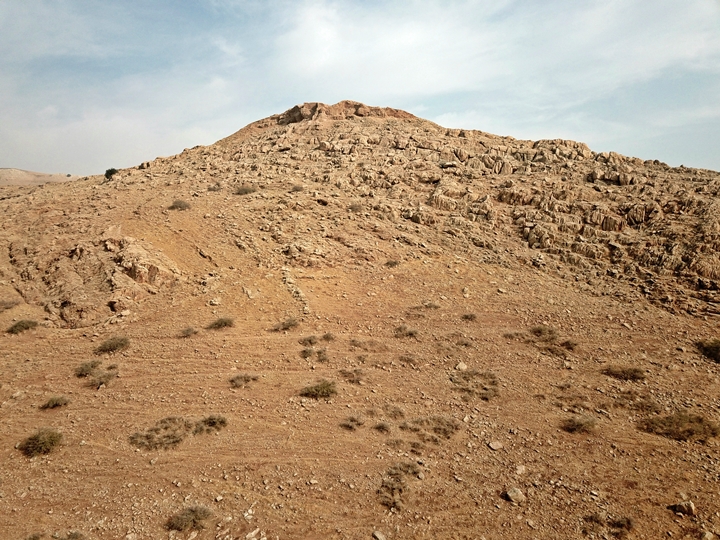 A closer view of the southern walls: 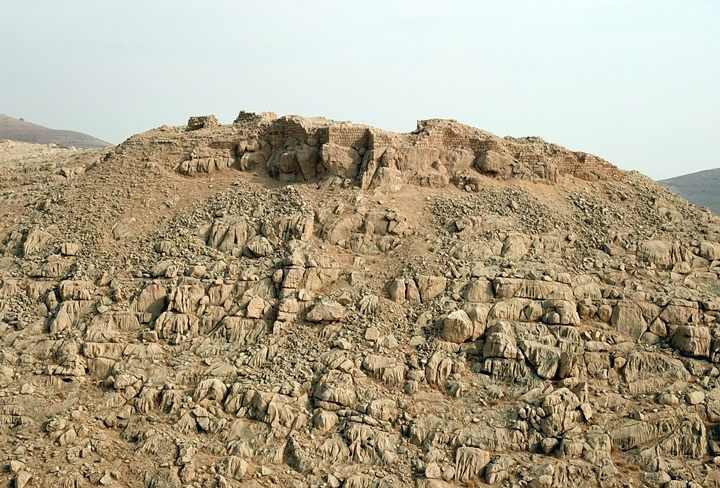 A higher view above the south side: 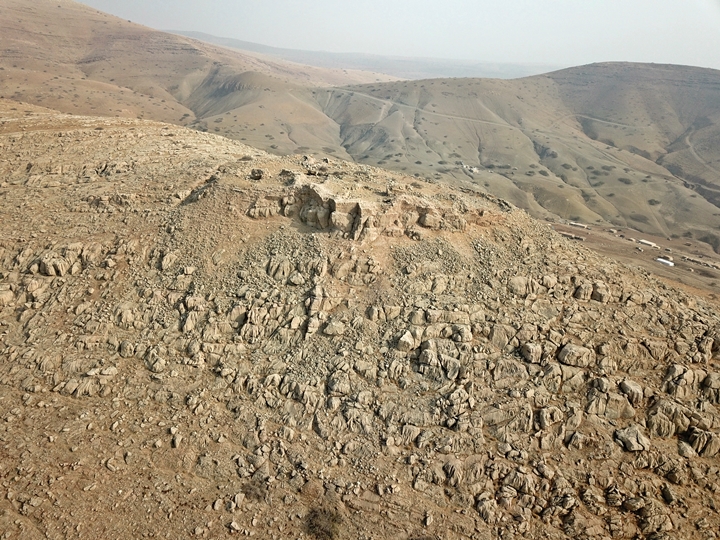 And a view from the south east side: 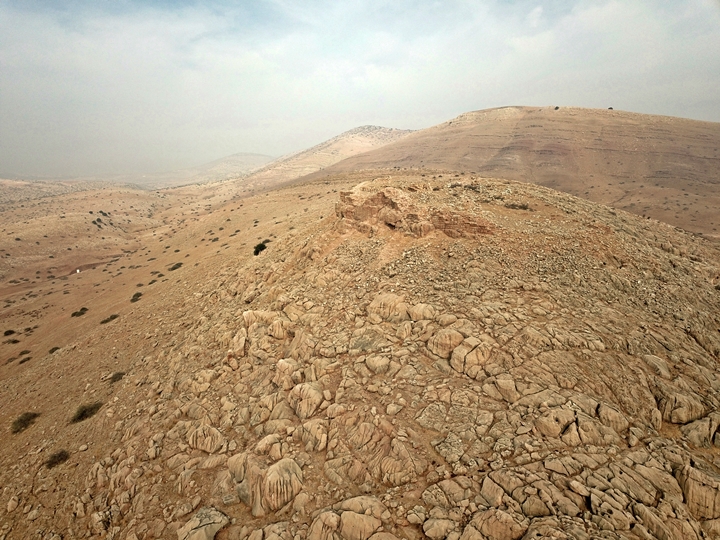 A closer view of the south east walls: 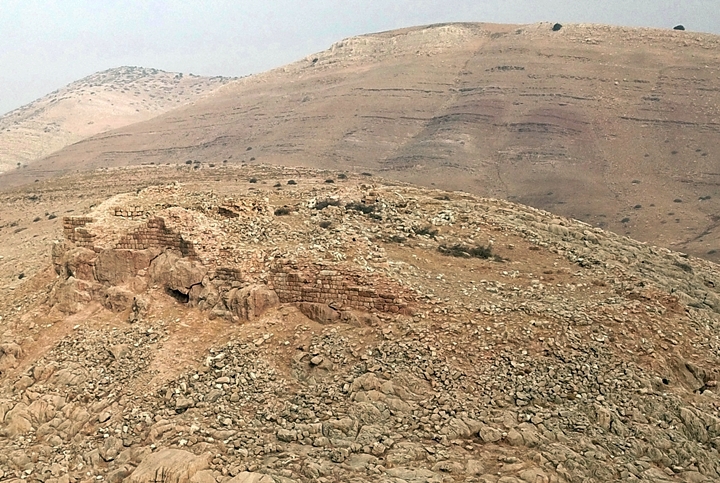 The following video shows a view of the site and its surroundings, as captured by the drone.

In the valley leading to the fortress are a number of hot springs, that gave the name to the site. The hot springs of Wady Maleh (“Valley of Salt Water”) are located 2KM east of the fortress. They were in use since the Roman period. A number of rock cut pools are located in the valley. The water’s temperature is 36 degrees Celsius, has 1,500 mg/Liter, and has a salty taste and sulfuric smell – hence the name ‘salt water’.

A hot spring is a spring of emerging  geothermal heated groundwater, rising from the earth. There are a number of hot springs in Israel, such as in Hammat Gader and Hammat Tiberias and along the Jordan valley.

The large structure on the side of the road, dated to the Ottoman period,  is an inn which served the bathers who came to the pools. The inn operated from 1929, after it was purchased by the Patriarch of Tayasir, until 1967. In recent years the spring (Ain Maleh), 200m to the west (upstream), has dried out. 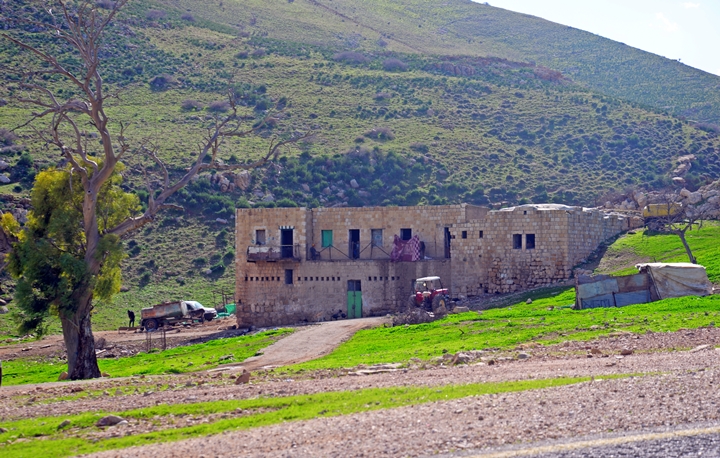 Ruins of a water operated mill is located on the east side of the inn. It received waters from the spring via an aqueduct, and used to grind wheat.

On the foothills above the mill are remains of a small fortress dated to the Byzantine period. 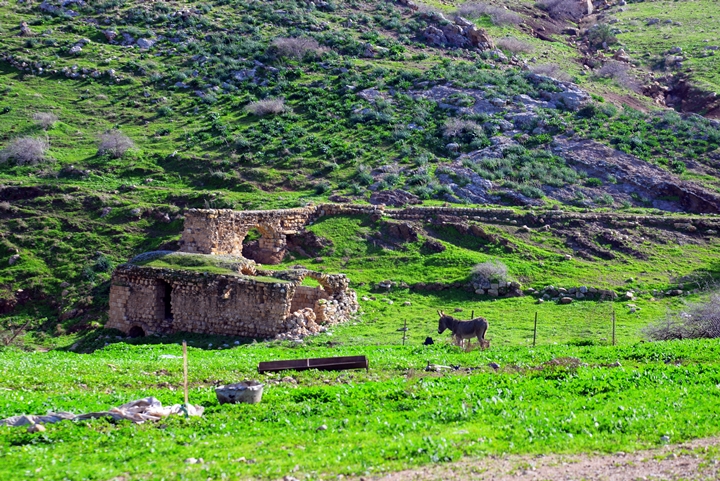 The fortress, seen in the next photo, is located west of the springs. 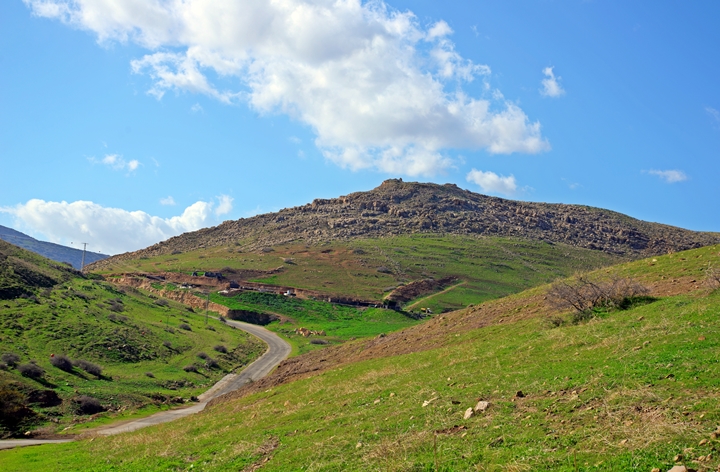 Along the road is an interesting rock formation, with layers of colored sandstone and volcanic rocks.  This geological formation is termed the Tayasir formation, named after the nearby village at the end of the road. It belongs to the Jurassic period, when sedimentary rock was formed over an earlier layer.  During the time it was covered by the Tethys Ocean. This period was also the peak of the Dinosaur reptiles. At the end of the period the Ocean receded. Tectonic pressures later raised and exposed the layer. 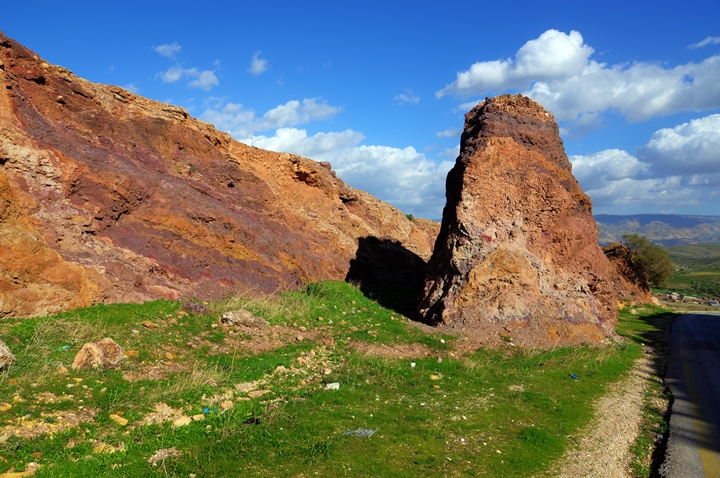 An open cross section of the formation is seen here – a rainbow of colorful layers: 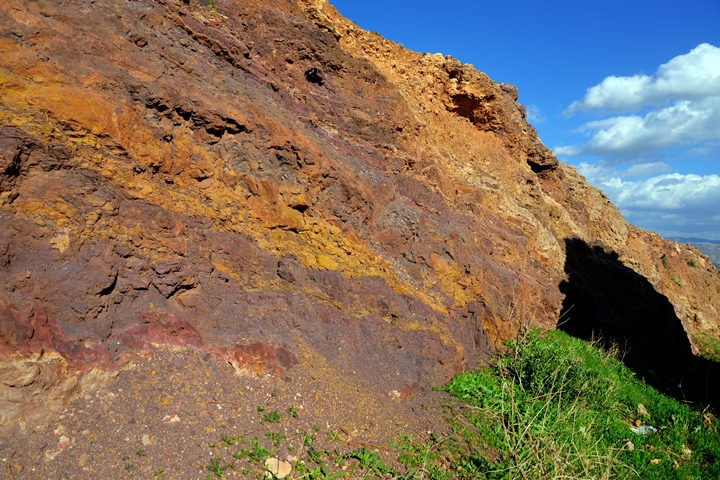