Along the upper section of the Banias (Hermon) stream are a number of interesting sites, including Roman bridge, HydroElectric station, flour mill and more.

This page describes the sites along the upper section of the Banias (Hermon) stream, along the western side of the ancient city: Roman bridge, hydro-electric station, water powered flour mill, ruins and — lots of water.

For other pages and an overview on Banias – see:  Overview page

Banias is located on the road (#99) that climbs up the Golan heights. The springs are located to the north of the main parking lot. The upper section of the stream, which is detailed in this page, is located between the Roman bridge and the south-western side of the Crusaders city (lower left side of the map). 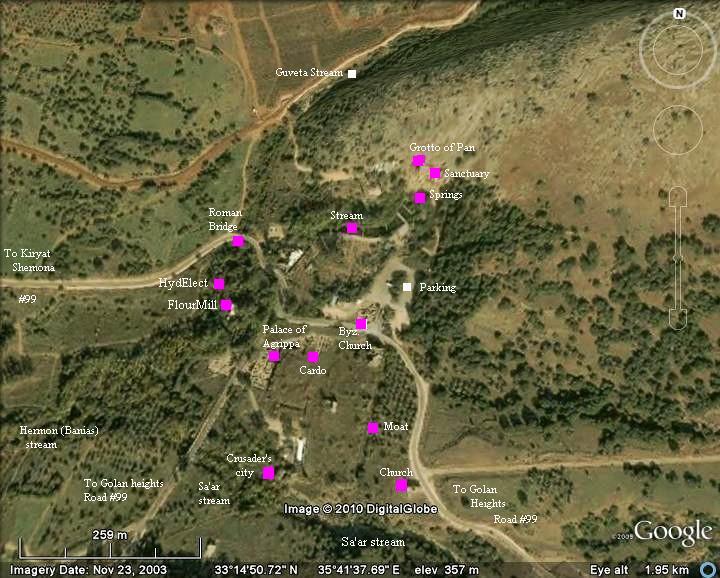 Plan of the Park:

The illustration below shows the location of the Banias springs (near the Grotto of Pan), the Banias stream (flowing south-west), the Roman Bridge (on the center left, where the Guveta stream joins the Banias stream) and the Flour mill. 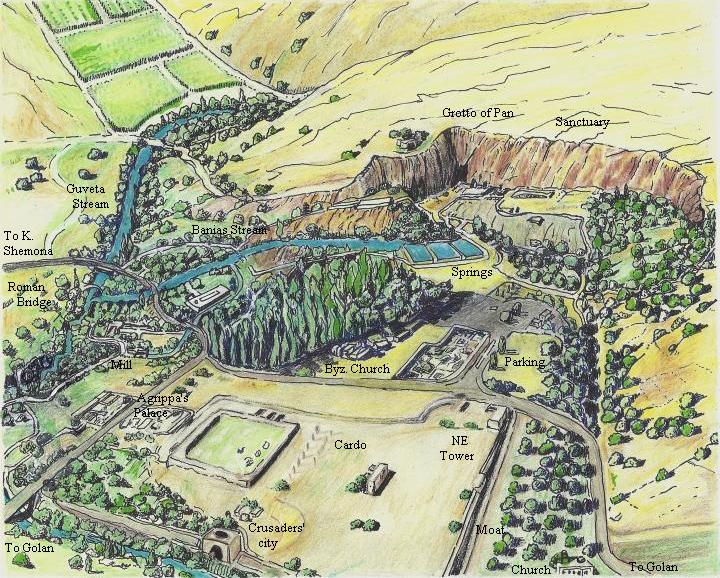 The Banias (Hermon) stream originates from the springs of Banias, located under the Grotto of Pan. The waters of the springs come from the Hermon mountain, located high above and. The stream flows to the west and then turns to the south, and is the most eastern  of the Jordan river sources. 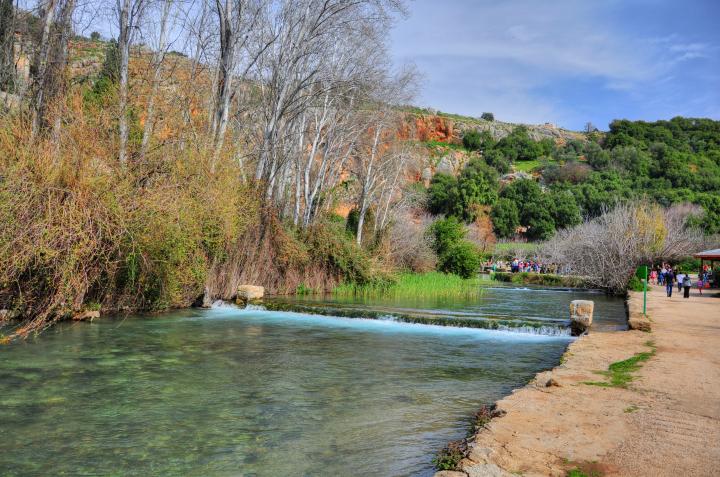 A nature trail passes along the eastern bank of the stream. 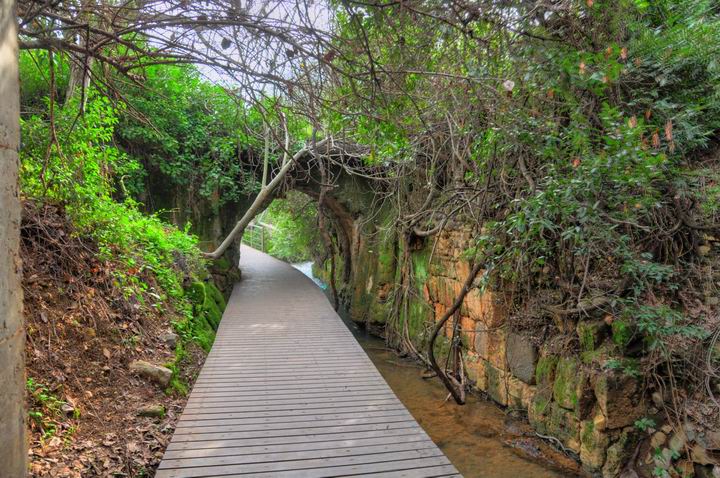 The trail passes under the base of a Roman bridge (read more about it). 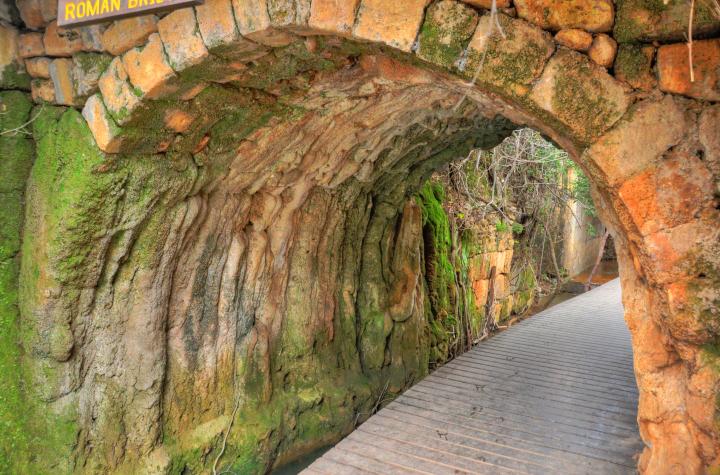 At this location the gushing waters from the Banias springs meet the calm waters of the Guveta stream. The combined waters push violently down through the narrow channel.

The power of the water was used downstream in order to operate a hydroelectric power station and a water-powered flour mill, as detailed below. 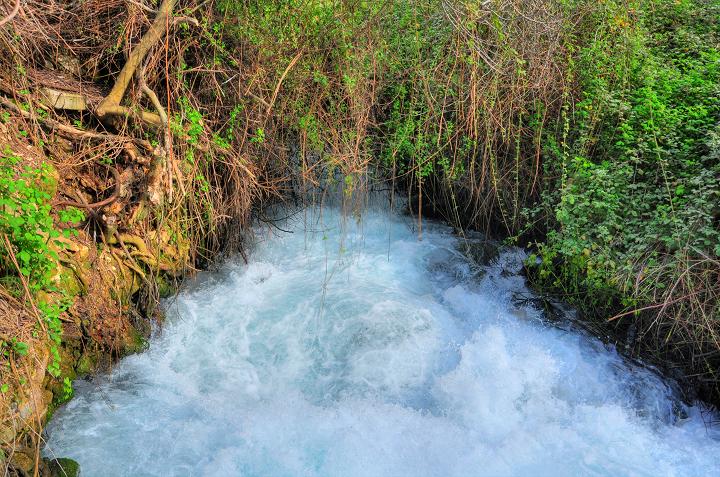 A Hydroelectric power station used the power of the water to generate electricity. It supplied electricity to the Syrian village in Banias until 1967. 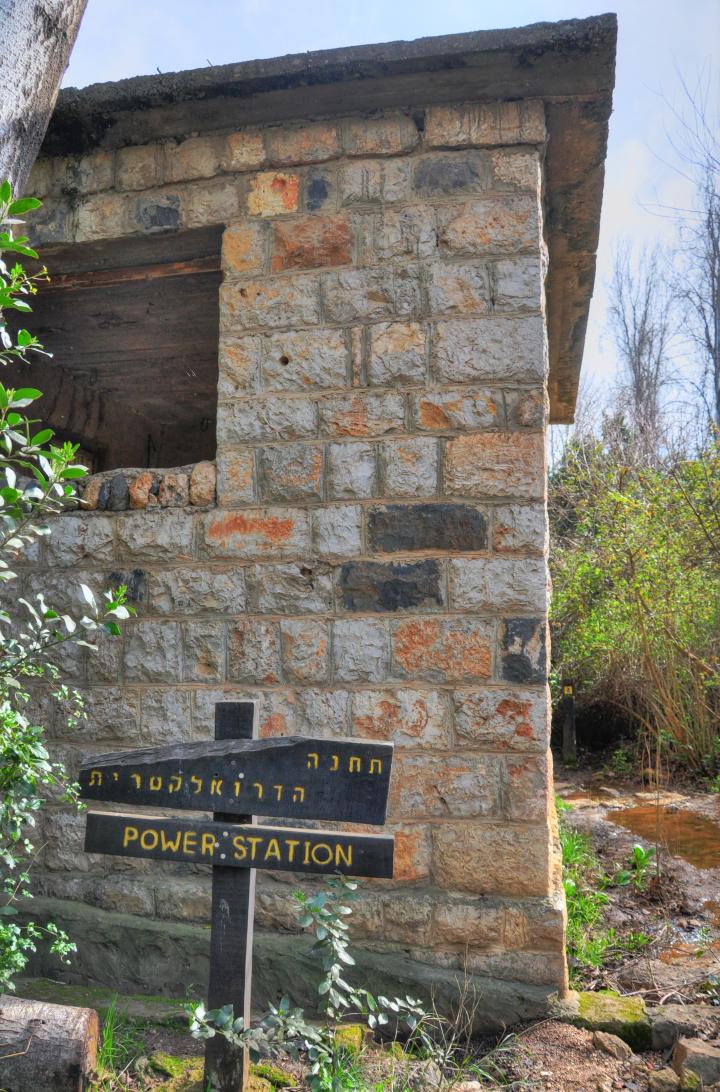 The upstream waters were diverted to an aqueduct, where they would slide down. Their gravitational force  turned a turbine and generator, which produced electricity. 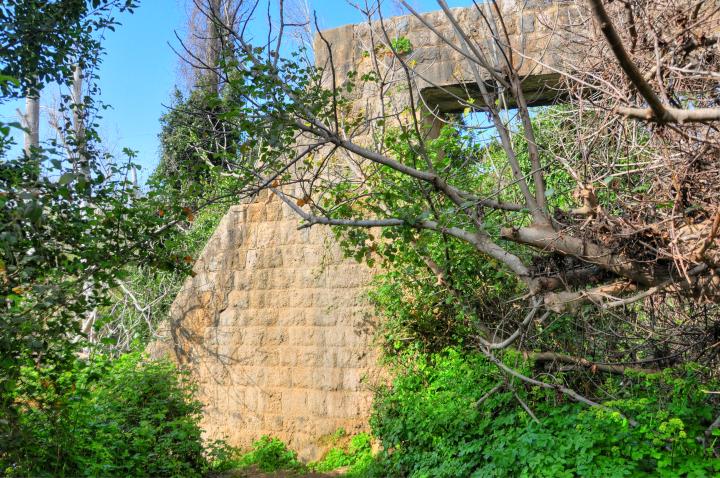 The path continues along the Banias (Hermon) stream. Walnut, plane and poplar trees and a variety of bushes grow along these banks. 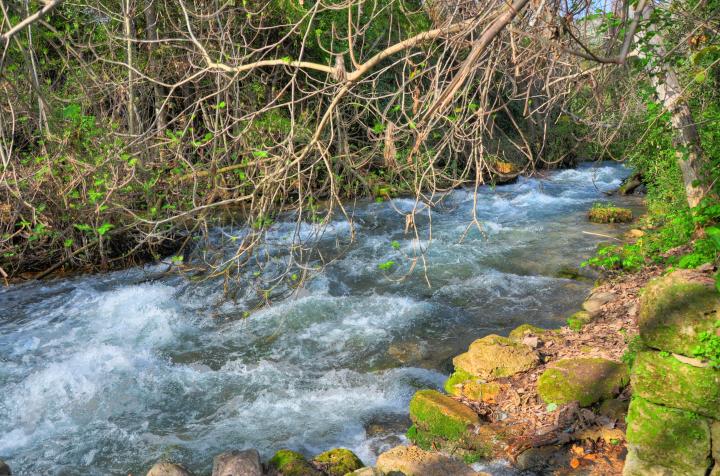 Another water based installation is located nearby – a water powered flour mill. The trail ascends to the Matroof flour mill, which uses the power of the water to operate grinding stones. 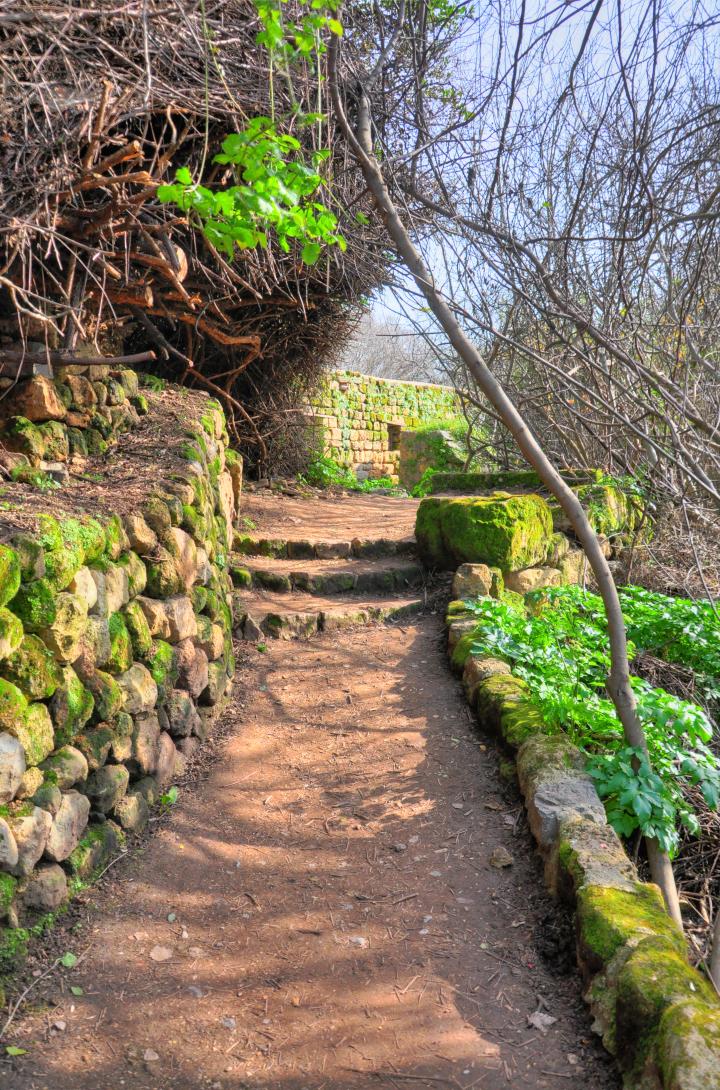 The flour mill serviced the villages in the northern Golan heights region until the 1970s. The date of its construction is not known, but is several hundred years old. Its name (“Matruf”) is from Arabic and means: whirling. 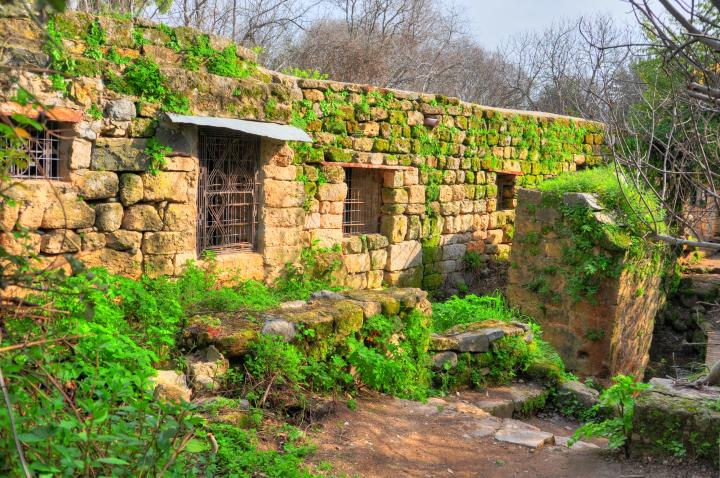 The trail passes along the western side of the old flour mill. 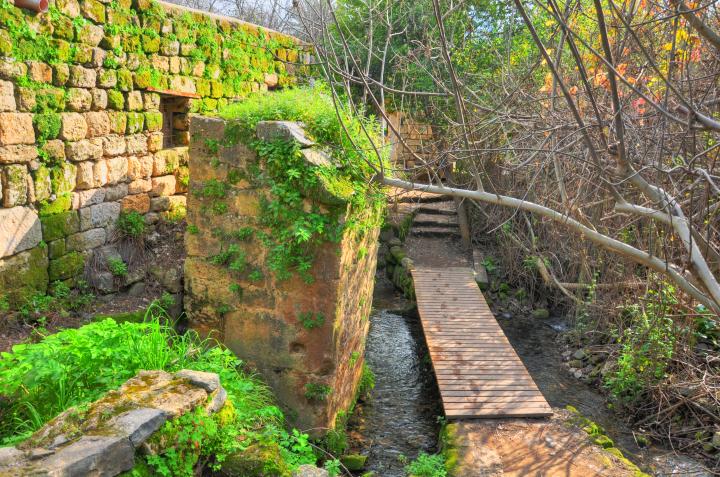 Under the structure are arched outlets were the water would flow out from the mill. Near the mill is a small shop, seen behind the corner, where the Druze bake pita bread. 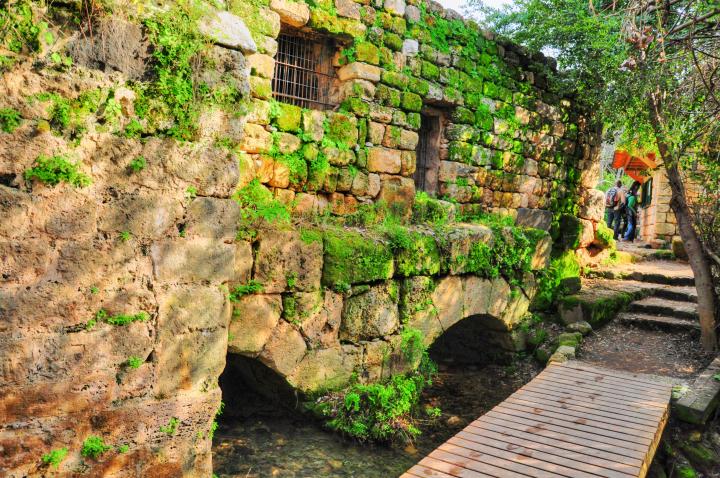 The front side of the mill is seen in the following picture. Above the structure is the aqueduct that channeled the upstream waters to the roof, where they would fall down into a chimney. 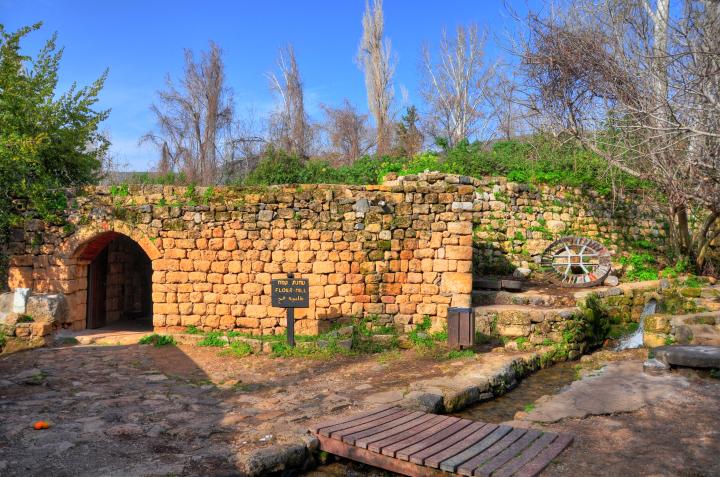 One of the three waterwheels is seen below. 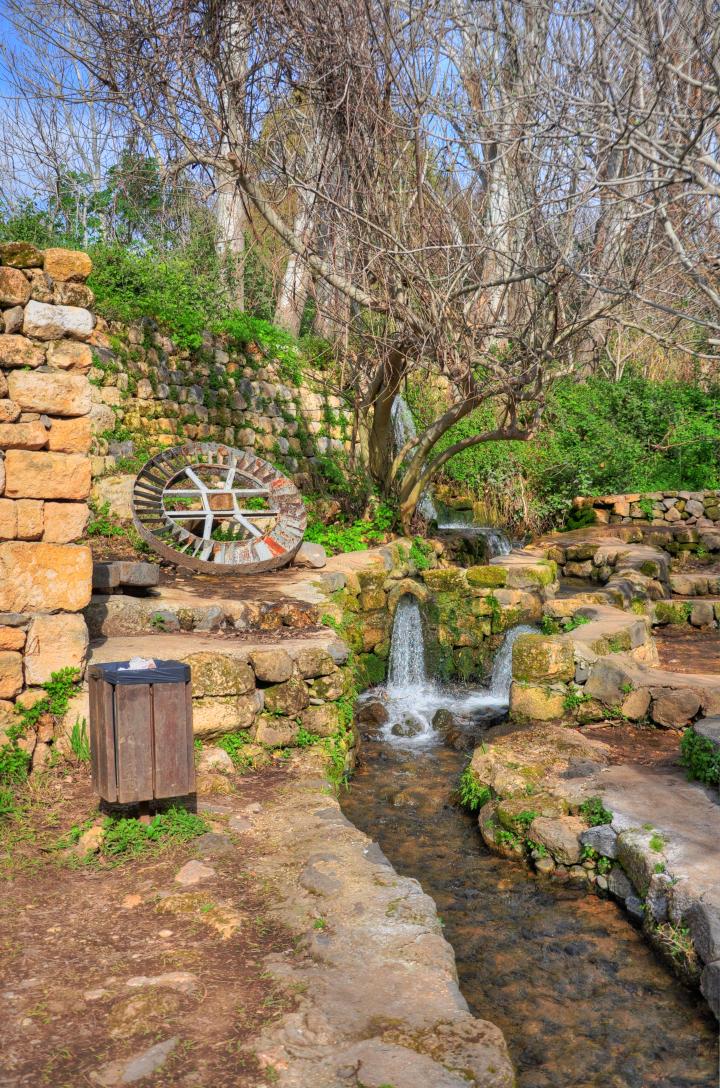 Inside the arched structure of the mill are three grinding installations. 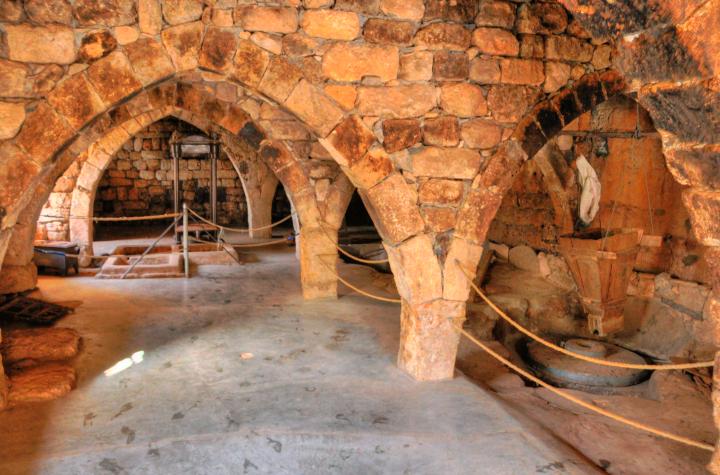 A closer view of the base of one of the grinding installations. The wheat grains was introduced into the box, and the grains fell unto the grinding stone where they would be crushed, creating flour. The flour was then collected and packed into sacks, and the owner kept one tenth of the yield as the fee. 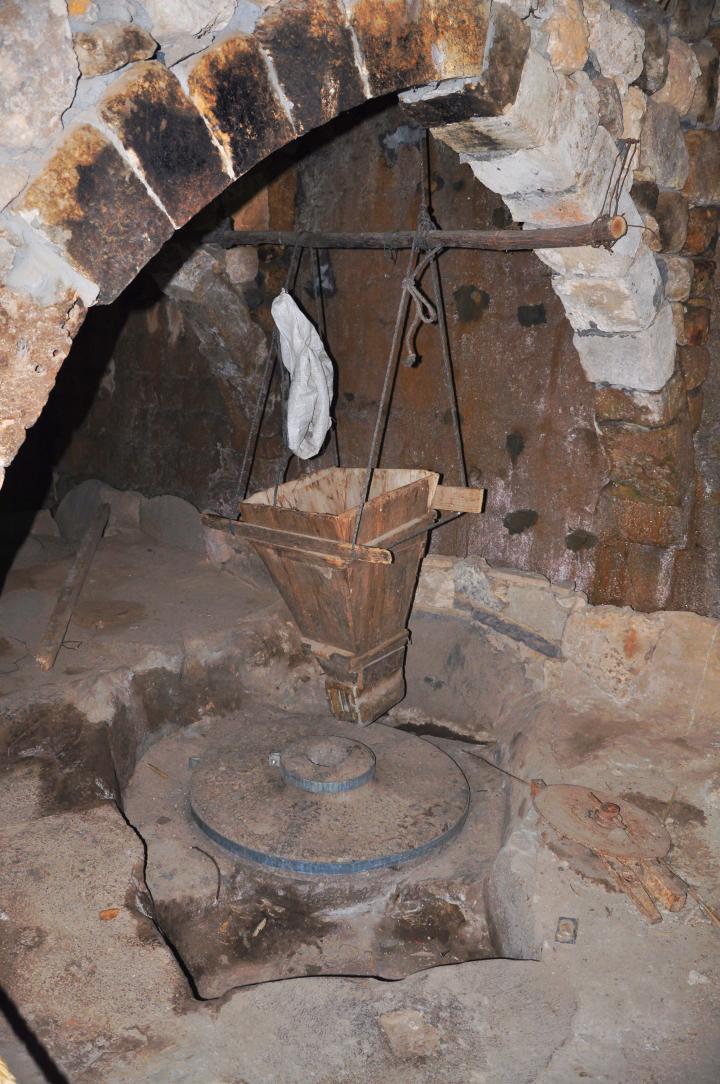 At the far end of the flour mill is also an old olive oil press, which used the water system for pressing the olives and for a secondary extraction of the olive oil.

(d) West side of the Crusader city:

The water channel from the flour mill continues along the trail, among the thick cover of the trees and bushes. This abundance of natural running water and trees is rare in this dry country and makes the nature adventure a great pleasure. 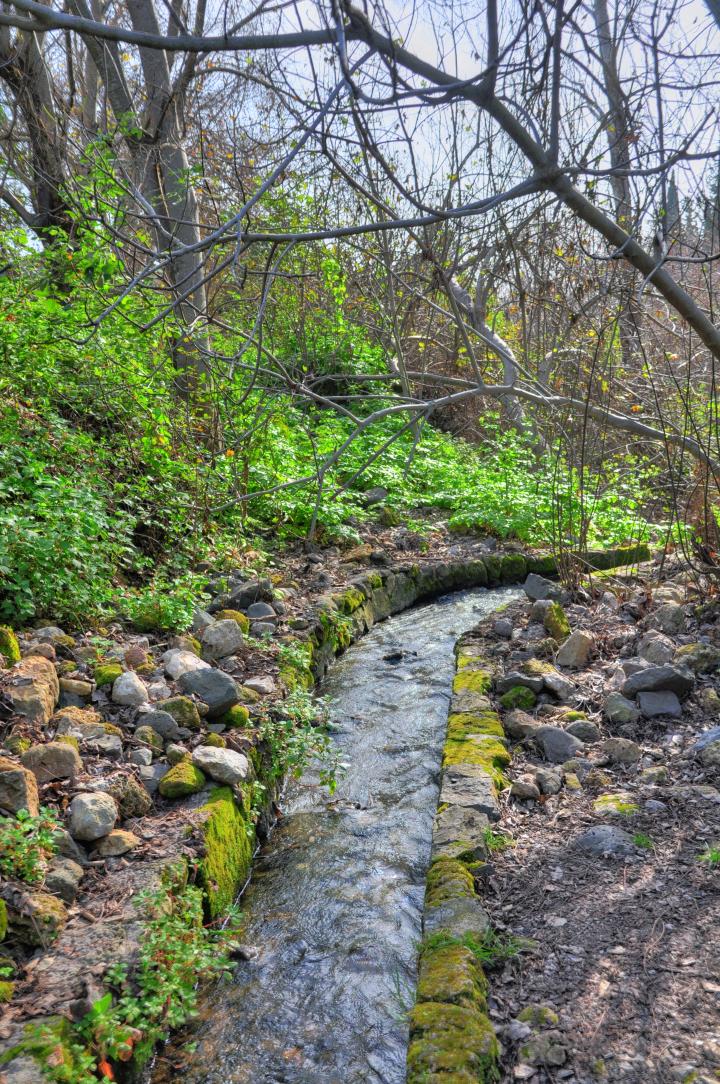 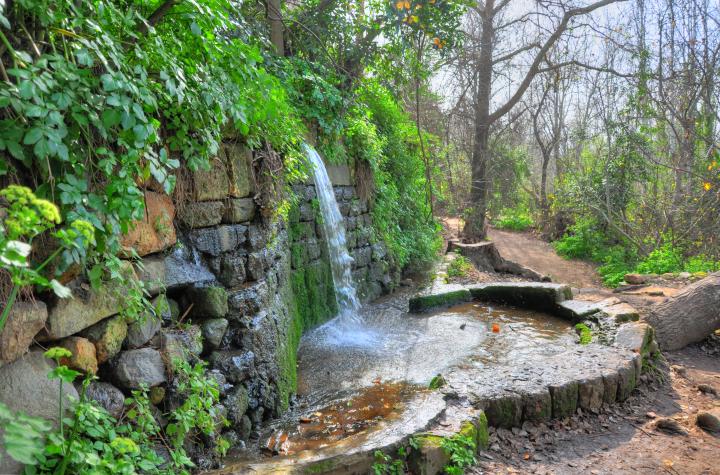 Another view of this waterfall, and one of the marble columns from Agrippa’s palace which is located above the terrace. 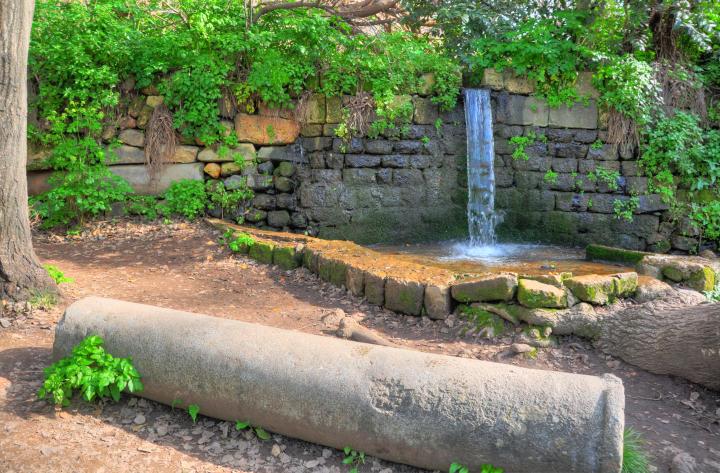 Along the path are segments of the Crusader walls, which are partially covered by the trees and bushes. 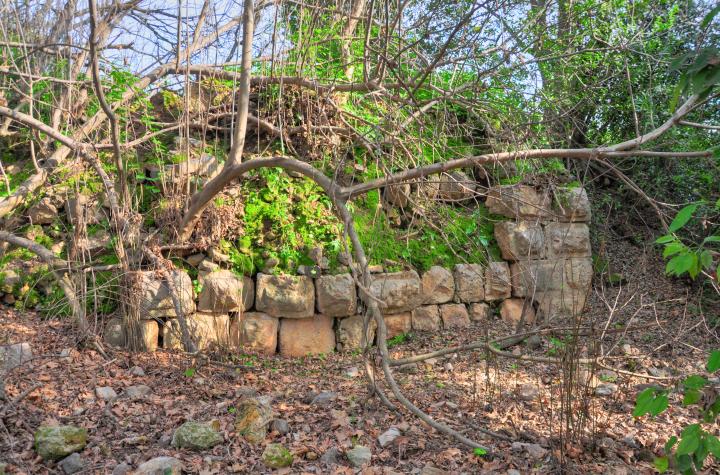 Another stream joins the Banias/Hermon stream, at a point which was once the south-west corner of the Crusaders city. It is called Sa’ar (“stormy”) stream, which receives its waters from the south-western slopes of the Hermon.

From this “junction” the trail splits:  the longer trail continues south (to the lower section and Banias waterfall) while the shorter trail leads back to the entrance (through the Agrippa palace or the Crusaders city). 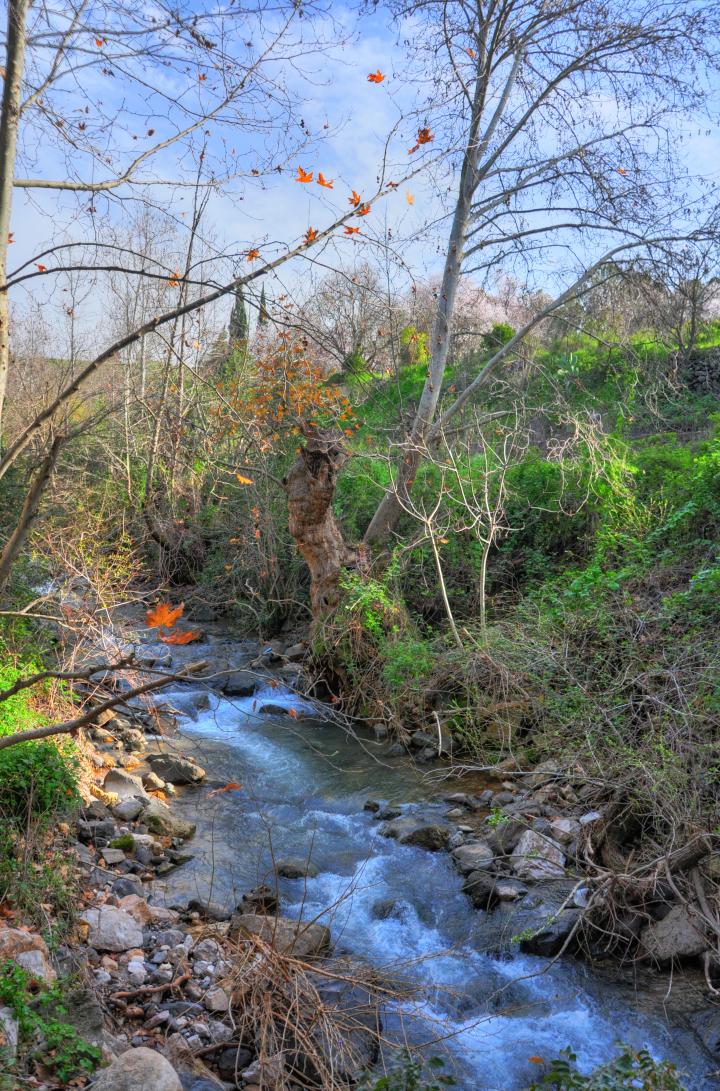 The lower section of the Banias/Hermon stream continues downhill, and is filled with waterfalls and other natural wonders. That lower section will be added in the future.

* Names of the city-

BibleWalks.com – have Bible will travel