This overview page describes the sites in the vicinity of the city of Ashkelon.

This overview page describes the sites within the modern city of Ashkelon, located on the southern coast of Israel.

A separate page focuses on the National park of Ashkelon, where the ruins of the ancient city are located.

Ashkelon is situated on Israel’s southern coast. Its major historic site is located in the National park of Tel Ashkelon, southwest of the modern city.

Note that there are other ancient and historic sites in the city, which will be added to this page in the future. 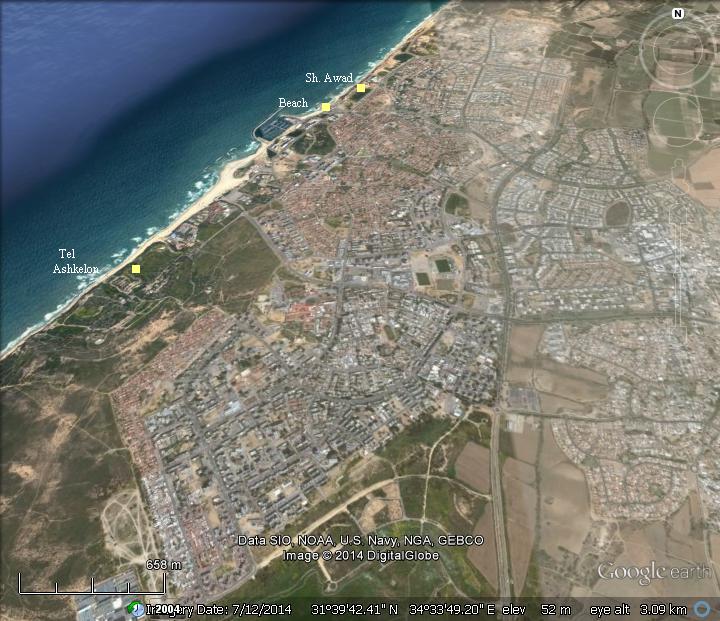 For a review of the ancient periods, see the Tel Ashkelon page.

Old Ashkelon was an Arab village named el-Mejdal (‘the tower’).

An illustration of the village, dated 1882, was published in a book by CH. W. Wilson , one of the PEF explorers. The title: “El Mejdal – the ancient Migdol”. The subtitle: “An important village of fifteen hundred inhabitants. Its mosque and tall minaret are constructed of ancient materials. A weekly fair is held here.”. 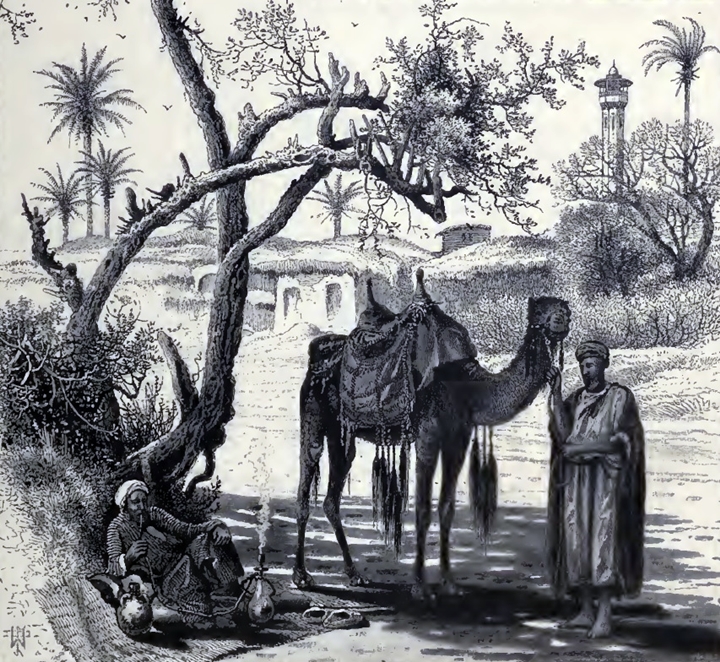 The village of el-Mejdal was demolished, except for its mosques and Khan.  The mosques are located on the east side of the modern city. Ashkelon’s Khan history museum, including findings from Tel Ashkelon excavations,  is housed inside the great mosque of el-Mejdal.

South of the modern city is the large National park, with ruins of the ancient city. Ancient Ashkelon encompasses a history of 4,000 years, a port city located on the main trade route from Egypt to the North. It started as a huge fortified Canaanite city, continued as a Philistine city, turning into a thriving commercial center and independent city during the Hellenistic and Roman periods, then ending as a  Crusader border fortress.

This photo is of the Medieval fortifications, which were constructed above the ancient Canaanite ramparts. In the background is the location of the Canaanite gate,  which is dated to 1850 BC – the oldest known in the world.

Read more about the ancient city of Ashkelon. 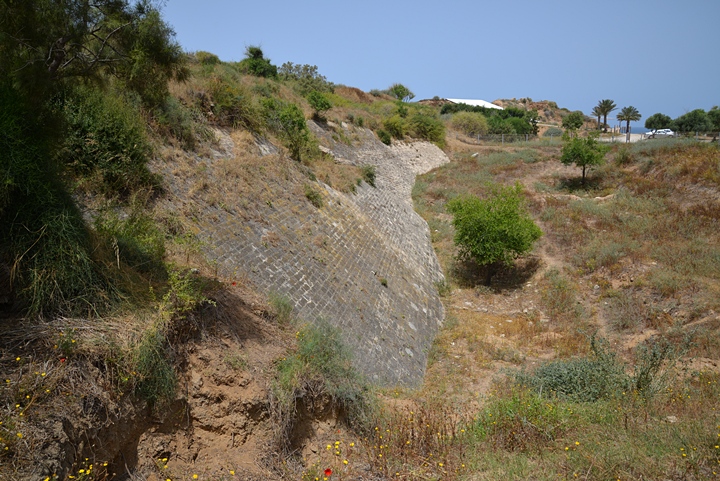 (b) Shore west of Tel Ashkelon:

To the west of Tel Ashkelon is a nice stretch of beach. The sand and the sea covers the remains of Ashkelon’s harbour and some of the structures that were once built on the edge of the city. But if you are already visiting the ancient site, why not enjoy the view?… 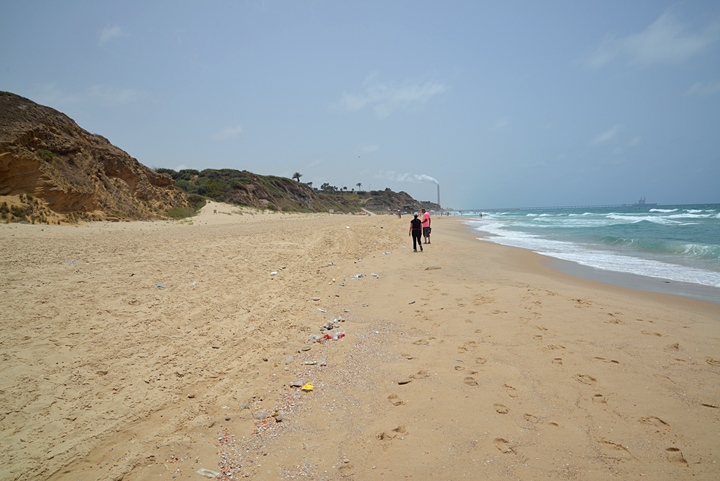 Along the cliff of the sandstone (Kurkar) ridge are some interesting spots, like this section near the northwest corner of Tel Ashkelon. The “veins” of the rock create a natural sculpture. 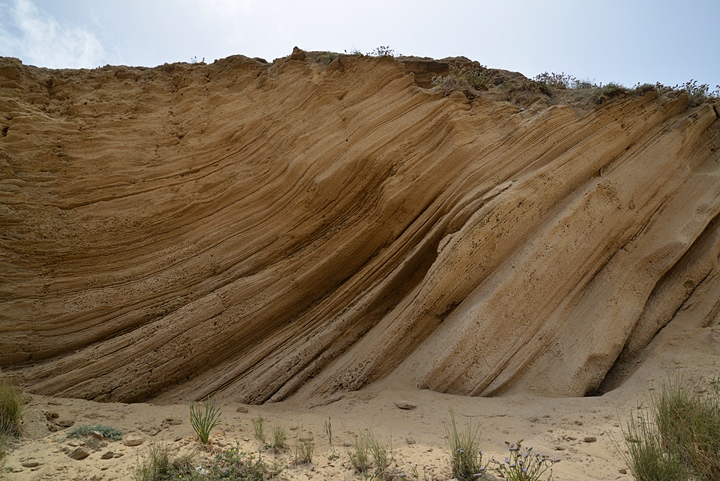 Wild flowers add some colors… This “Ad-Ad Kachol” flower (Cut-Leaf Sea-Lavender) is common along the shores of Israel, and it blossoms from March to June. 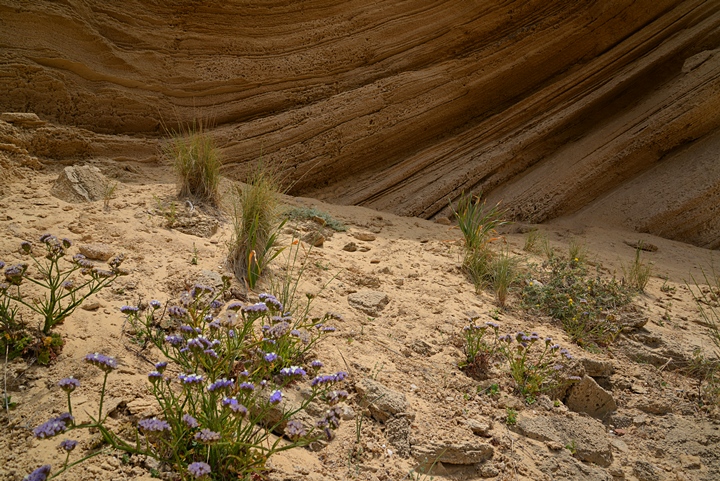 In the next photo, the sign warns against swimming in this section, but the bird finds it a convenient landing place. 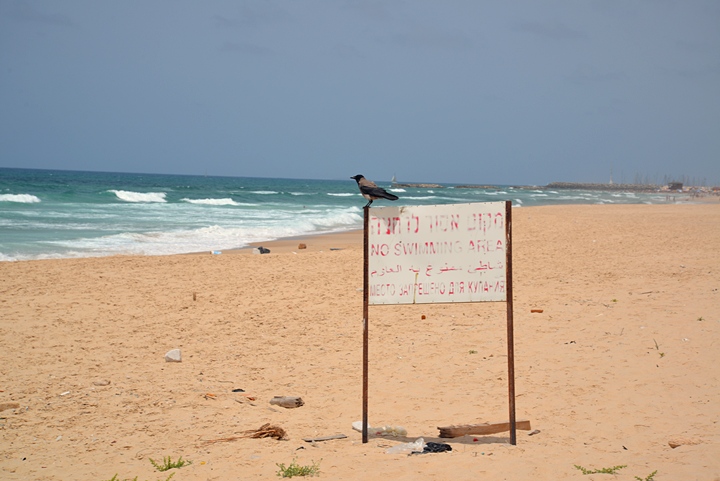 Birds are not the only flyers… here a power hang glider flies over the beach. 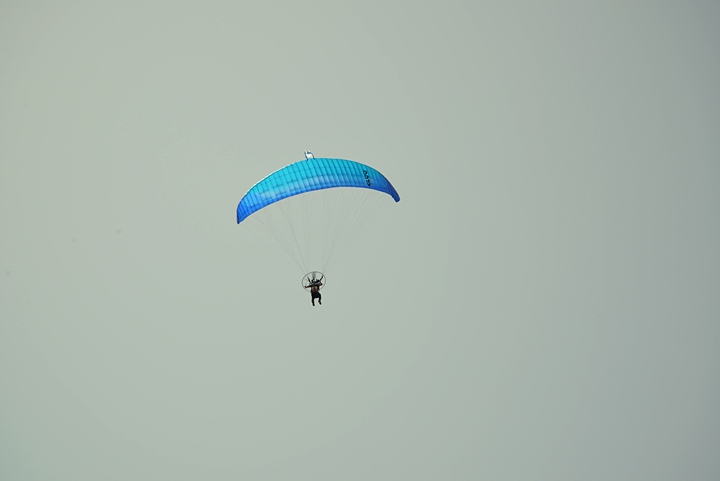 North of Tel Ashkelon, and north of the Ashkelon marina, is the new Bar-Kochba promenade. It is situated along the cliff overlooking the beach,  west of the Bar-Kochba avenue. 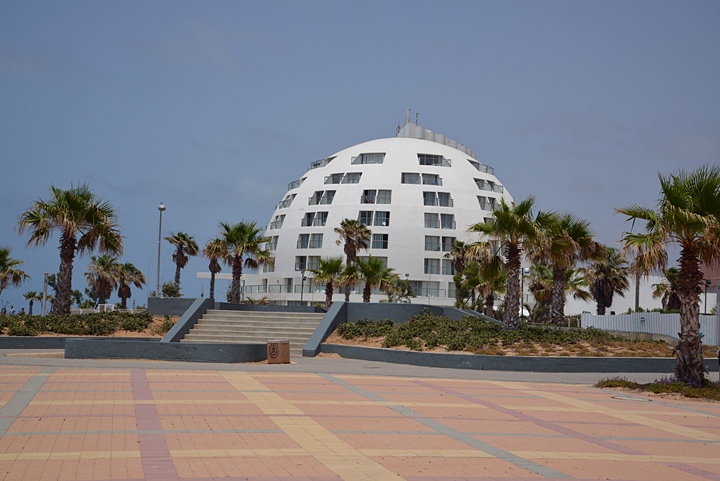 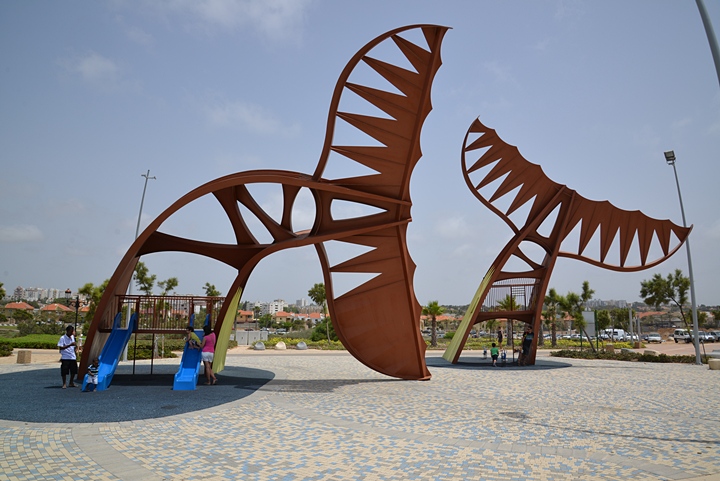 The tails of the whales are 9 meters high and 11 meters wide. They were designed by Aarle Ben Areieh, an Israeli artist whose motto is “Day to Earth Dreamer”. His sculptures: “… environmental pieces are always related to the human space and environment”. 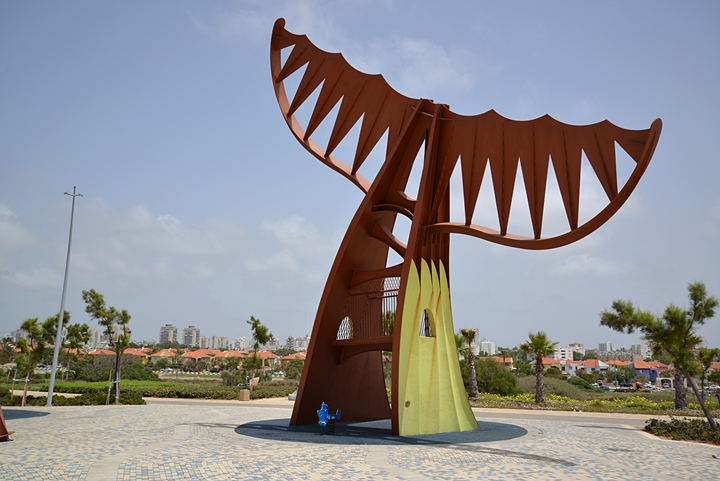 The boardwalk overlooks the Bar-Kochba public beach, which is north of the Marina. In this photo the Marina is seen on the far left side. 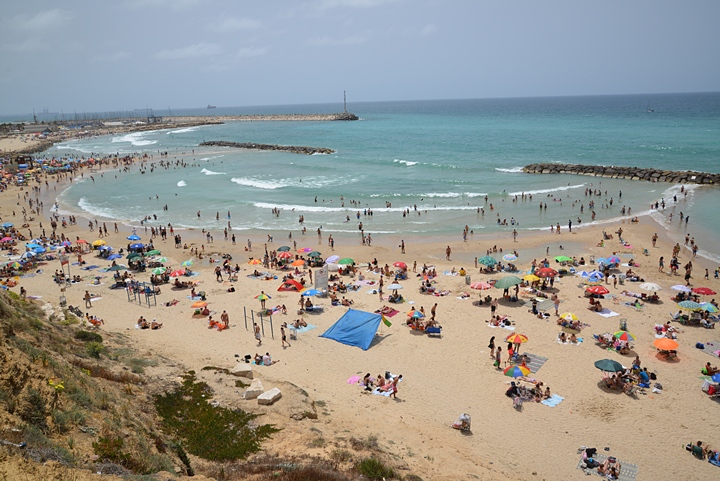 A panoramic view, as seen from the boardwalk,  is shown in the following picture. If you press on it, a panoramic viewer will pop up. Using this flash-based panoramic viewer,  you can move around and zoom in and out, and view the site in full screen mode.  Hot spots indicate the major points of interest.

To open the viewer, simply click on the photo below. It opens a new window, and will run after a minute or so.

Along the boardwalk is a ancient structure dated to the Mameluke period – a sheikh’s tomb called “Sheikh Awad”. 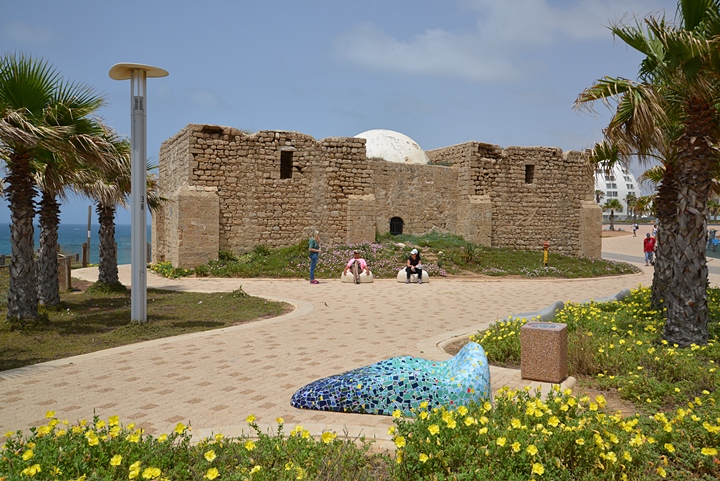 The identification of the Holy person buried here is unknown.  Until 1948 the Muslims came to pray here on Fridays. 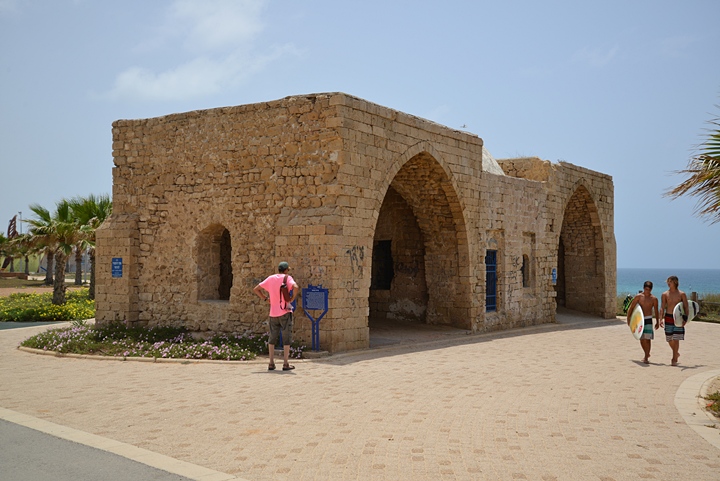 The Mamelukes  attempted to strengthen the coastal western frontier by establishing such structures. Another similar shrine is located in the National park. 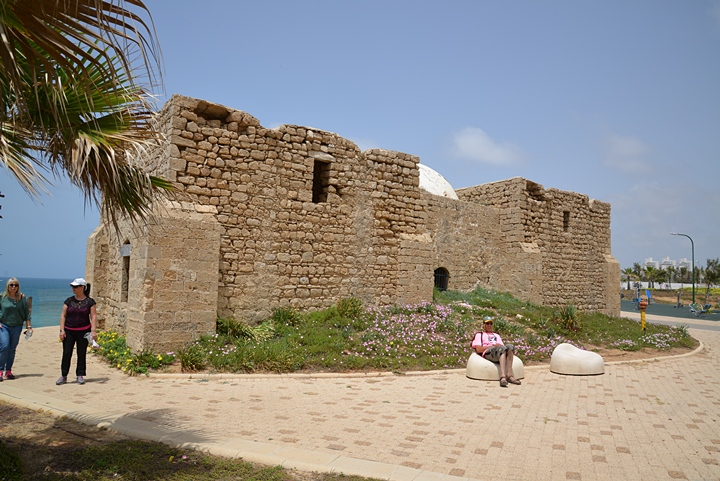 A view from the eastern side: 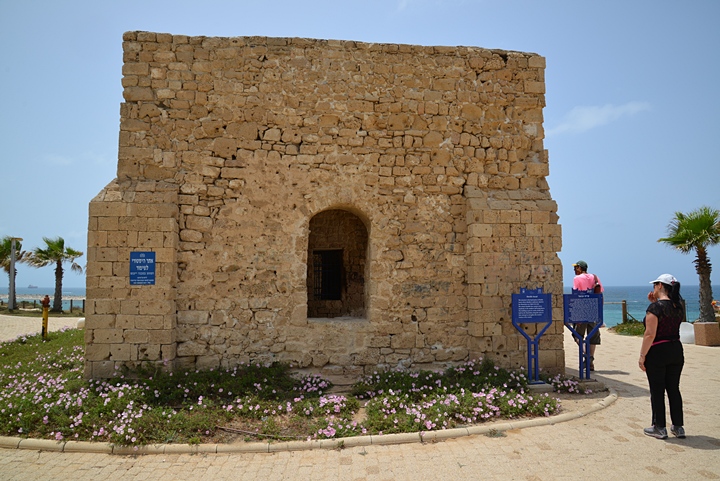