An octagon chapel on Mt Olives, built over ancient structures. According to tradition, this sacred site is where  Jesus ascended to heaven 40 days after resurrection. Luke 24 51: “And it came to pass, while he blessed them, he was parted from them, and carried up into heaven”. 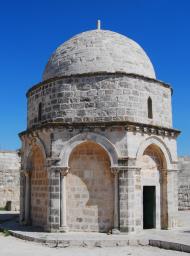 A sacred chapel on Mt Olives, where according to tradition is the site where Jesus ascended to heaven 40 days after resurrection. The octagon shaped Dome, built in the center of an enclosed yard,  was built over earlier  Byzantine and Crusaders period structures.

The ruins of the chapel is located in the suburb of A-Tur, on the east side of the main road of the top of Mount of Olives, at 830M above sea level.  It is easily accessible, and you can park close to its entrance.

Near the Ascension chapel is the Russian Orthodox Church of the Ascension, which is another traditional site of the ascension. It is located near a tall tower inside the village of A-Tur. 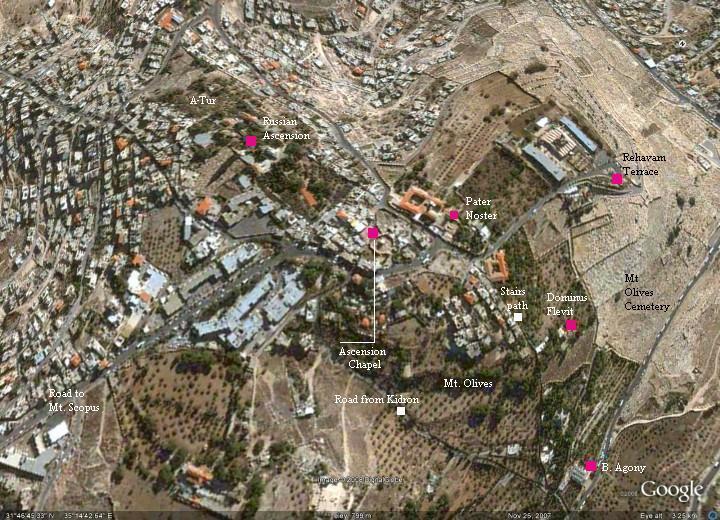 According to tradition, this is the site where Jesus ascended to heaven 40 days after resurrection  (Luke 24 51: “And it came to pass, while he blessed them, he was parted from them, and carried up into heaven”).

The church was built here at the end of the 4th century as a memorial chapel, marked by Constantine’s mother, Helena.  The Byzantine design was round (12M in perimeter – see diagram below). Inside the structure was a a double row of columns with an open roof, laid out in two concentric circles (6M and 2M in perimeter). It existed until the 7th century, and was destroyed by the Persians. It then was rebuilt, and existed until the 10th century, but destroyed again during the Arab conquest.

The site was rebuilt by the Crusaders in the 12th century based on the original Byzantine design.

The church was built from two concentric octagon-shaped structures – an external 12M x 12M structure, and a central 2x2M temple. It was built over the round Byzantine bases. The inner chapel was surrounded by columns and arches, which supported an open cape.

The compound had a secondary military function – one of the fortresses along the road to Jericho that protected the pilgrims. 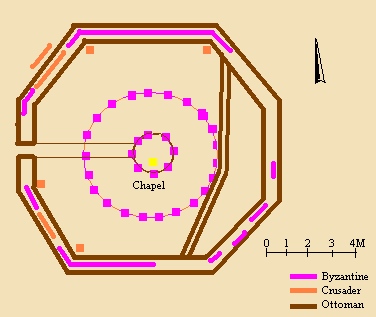 In 1187 Saladin captures the city and converts it to a mosque.

Since the chapel was mainly used by Christians, a second structure was built during the Ottoman period on the south side of the compound and the mosque was relocated to it.

In 1835 the Crusader structure was converted to an enclosed room, by covering the cape and adding walls between the columns.  The reconstruction was conducted by the Armenian Christians, who hold celebrations in this site on the eve of the feast of ascension, 40 days after Easter.

A Russian Orthodox church was built nearby in 1870, marking another site of the ascension.

Archaeological excavations were conducted here by the Franciscans during 1959-1964. The present structure is based on the Crusader design, with small changes conducted after the retreat of the Crusaders at the end of the 13th century.

A small court yard (12M by 12m) surrounds the chapel. The walls around the compound are based on the Byzantine and Crusader structures, and some of its bases can be seen along the walls. 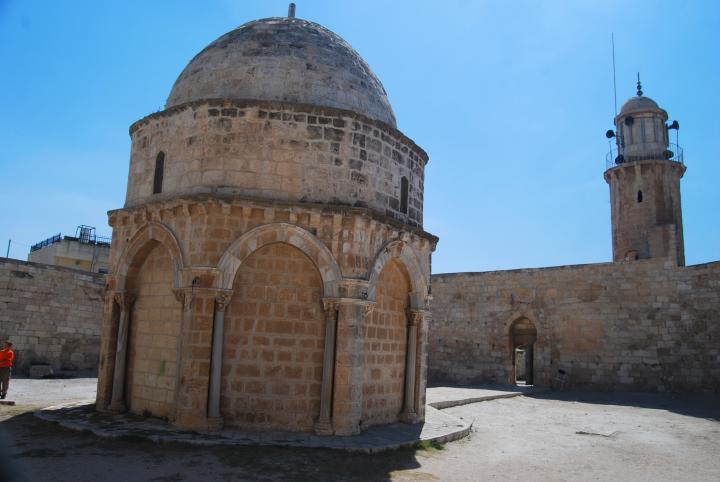 The entrance to the chapel is seen in the photo below. To the right of the entrance is the tower of the adjacent mosque. To the left of the gate are remains of the Crusader church – a base and several layers of the wall.

On the walls are a set of hooks that were used by the pilgrims to cover the yard with tents during the ascension celebrations. 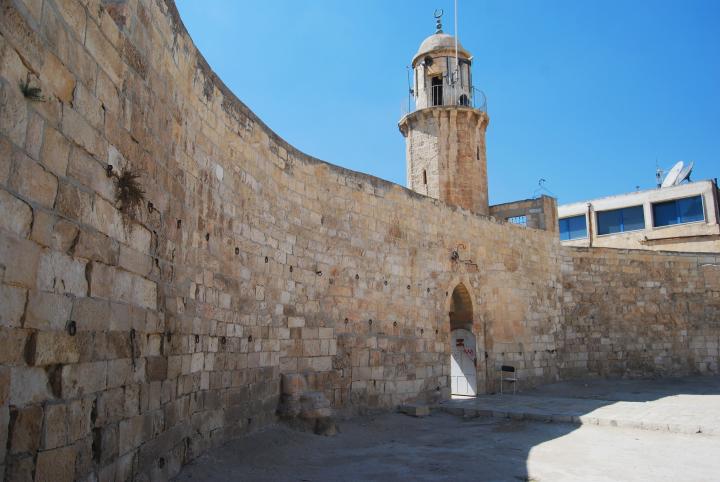 (b) Entrance to the chapel:

The chapel stands in the center of the walled yard.  The entrance to the chapel is located on the western side of the structure. The original structure is Crusader, built over ruins of a Byzantine memorial chapel. The walls between the columns and the covered cape were added in a later period.

Behind the chapel, along the walls, are several altars used by different Christian sects. The one in the photo below is used by the Jacobite Syrian Christians. 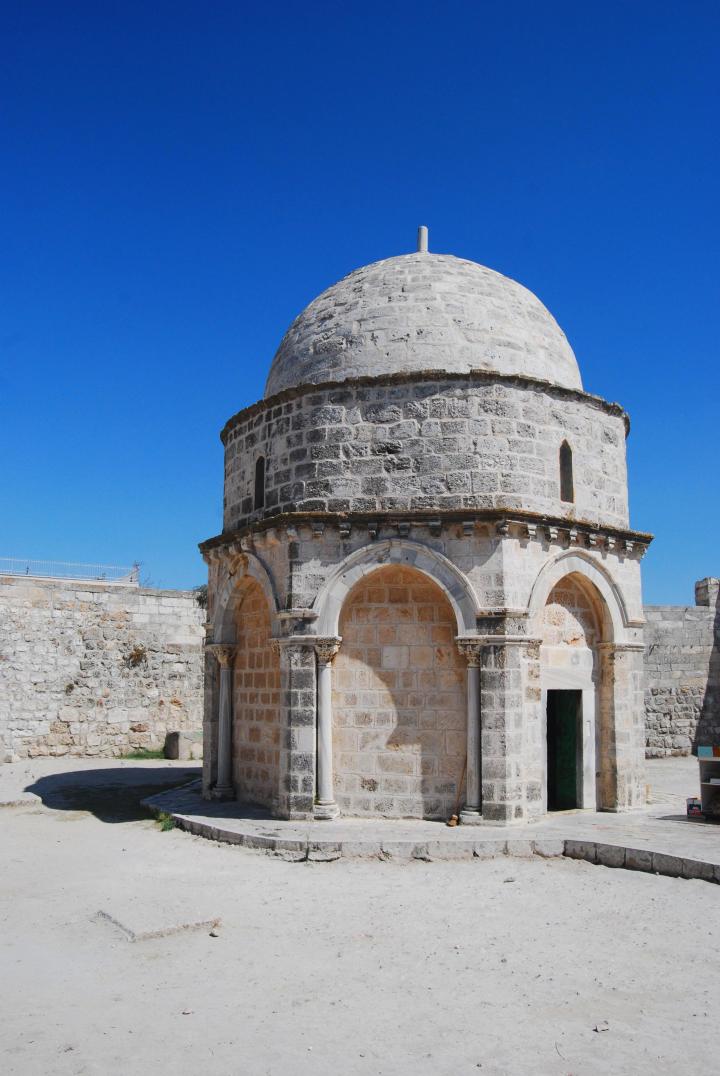 In the center of the floor, inside the dome, is a stone with a cavity. According to tradition, it is an imprint of the foot of Jesus when he made the ascent to heaven. Visitors come here to cherish the last spot of Jesus on earth, read passages from texts and sermons, chant and light up candles. 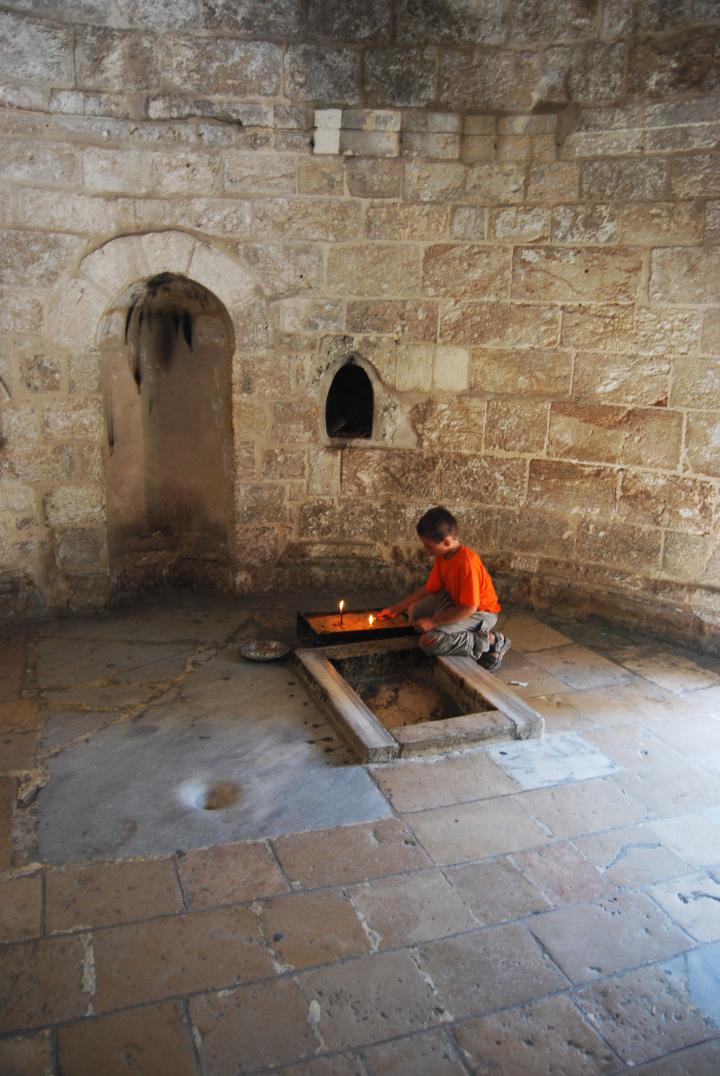 A view of the ceiling is seen below. The original Crusader cape was open, and the cover was added in a later period. 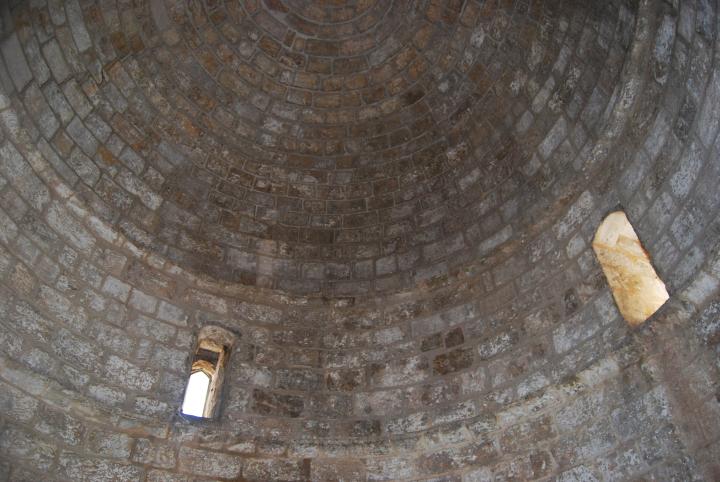 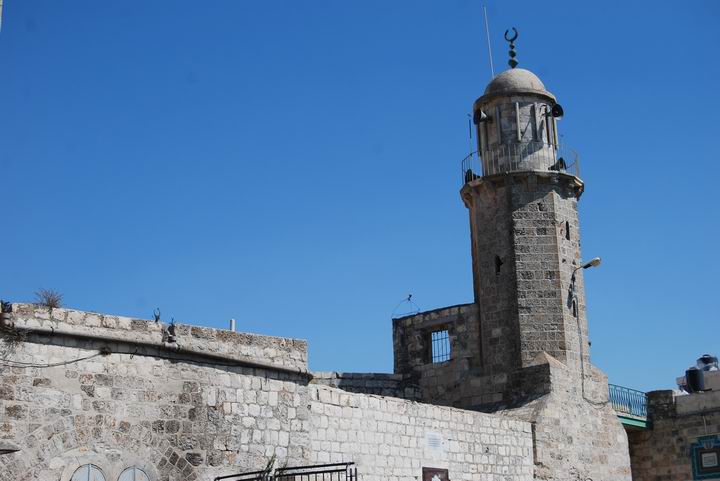 “And he led them out as far as to Bethany, and he lifted up his hands, and blessed them. And it came to pass, while he blessed them, he was parted from them, and carried up into heaven”.

“And when he had spoken these things, while they beheld, he was taken up; and a cloud received him out of their sight. And while they looked stedfastly toward heaven as he went up, behold, two men stood by them in white apparel; Which also said, Ye men of Galilee, why stand ye gazing up into heaven? this same Jesus, which is taken up from you into heaven, shall so come in like manner as ye have seen him go into heaven. Then returned they unto Jerusalem from the mount called Olivet, which is from Jerusalem a sabbath day’s journey”.

A-Tur – Arabic: “The Mount” (of Olives) – an Arab neighborhood on top of Mt of Olives where the Ascension church is located

The Ascension:  points of interest on Mount Olives: