Joshua 3:16: “That the waters which came down from above stood and rose up upon an heap very far from the city Adam, that is beside Zaretan”.

The site is located on the border with Jordan, and can be reached only after pre-arrangement with the army.

An aerial photo is shown below, indicating the major points of interest and the place of the bridge(s). 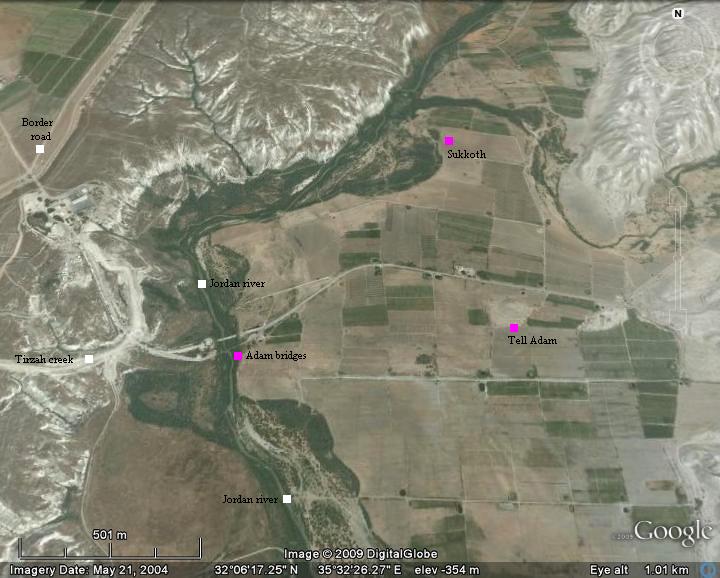 The crossing at the Adam bridge started in prehistoric times, and was a major ancient trade route. A mountain pass exists on the west side of the bridge (along the Tirzah creek, connecting to the region of Efraim) and on the eastern side of the bridge (along the Yabbok/Zarka river, connecting to the Gilad in Jordan). This made the crossing at this location most convenient, and was in use for many millenniums until modern times.

The Bible describes the location of the crossing by the Israelites, led by Joshua, as passing at Adam (Joshua 3: 16): “That the waters which came down from above stood and rose up upon an heap very far from the city Adam…”.  An ancient city is indeed located here, and called Tell Adam.

The bridges across the Jordan river were constructed and destroyed many times. Each bridge used a different location, all in a near proximity.

The Mameluke ruler, Baybars, erected a large (400m) bridge in 1266 AD. It was in use until the Ottoman period, and was blasted in 1946. The British soon constructed a new bridge, and the Jordanians added another one in the 1950s. The two bridges were destroyed by the IDF during the 6 day war (1967). Later that year Jordan constructed a pre-fabricated (“Bailey”) bridge on the south side in order to support the commercial trade traffic between Jordan and the West Bank.

The bridge is not in commercial use in recent years, since the traffic between Jordan and Israel – now under a peace treaty – was relocated to Allenby bridge. The area of the bridge is a closed army zone, and visits to the site are permitted only after coordination with the Army.

The panoramic view below shows the area of the Adam bridge, with a view towards the east (Jordan). In the background are the mountains of Jordan. The mountain pass – Yabbok/Jabbok river, is located left to the center of theses mountains.

Clicking on the photo will open a flash viewer, which will allow you to move around, and open  a full-screen view.

A closer view is seen below. The old and new bridges are located in the center. They pass over the Jordan river, hidden from this angle. The narrow river flows left (North) to right (south), marked by the grey bushes on the bottom of the picture. Farther behind, on the right side, is the ancient Tell Adam – a round barren hill. Behind it is the mountain pass of Yabbok river (Jabbok, Zarka) was one of the major ancient trade routes, leading to the east. 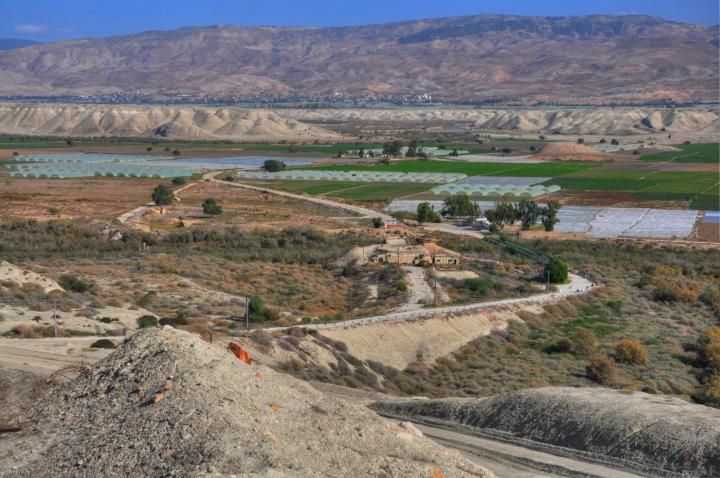 A closer view of the bridges is seen below. The blown up Jordanian northern bridge is seen in the center, while to the right of it is the Mameluk bridge. The river passes along the grey line of bushes and reed. 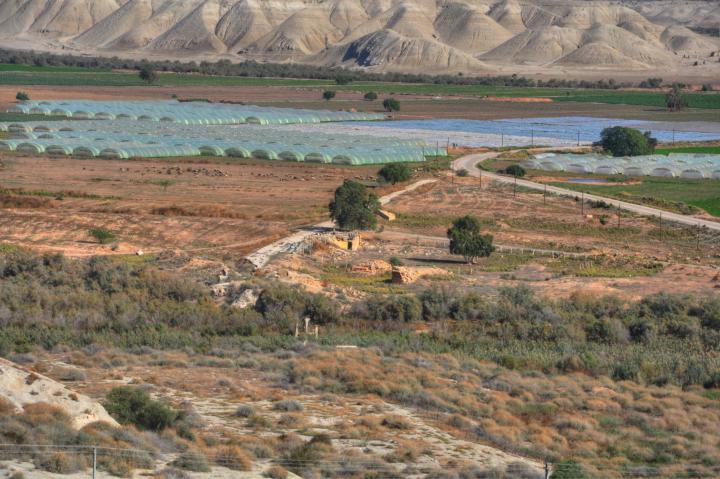 A closer view of the ruins of the Mameluke bridge is seen below. It was constructed in 1266 during the times of Baybars, and was in use until the Ottoman period. The original length of the bridge was 400m. 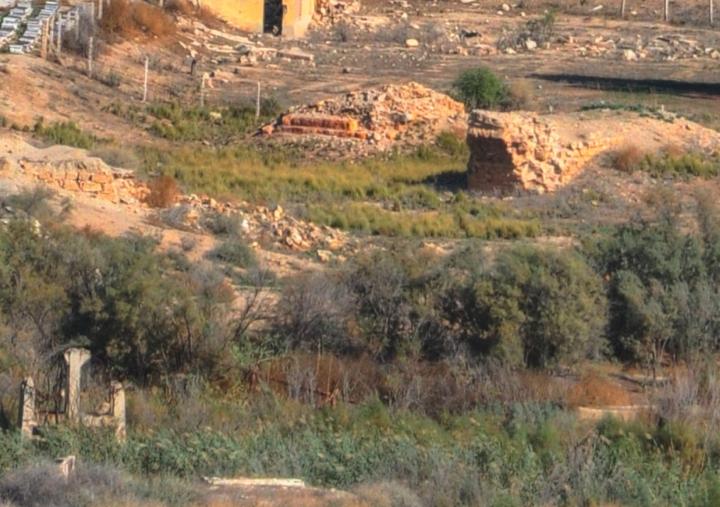 The Jordanians constructed two bridges in the 1950s. The photo below shows the northern bridge. It was blown up during the 6 day war (June 1967) in order to cut the Jordanian army from entering to the west bank. 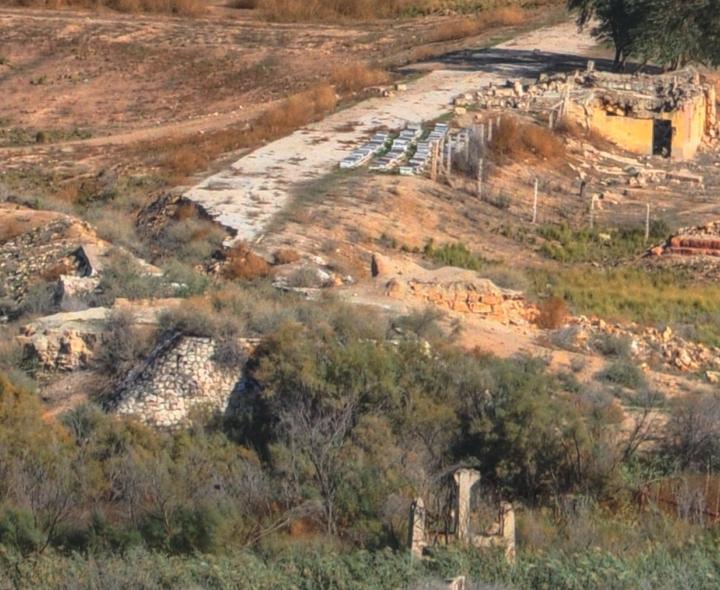 The photo below shows the southern Jordanian bridge, also blown up in 1967. 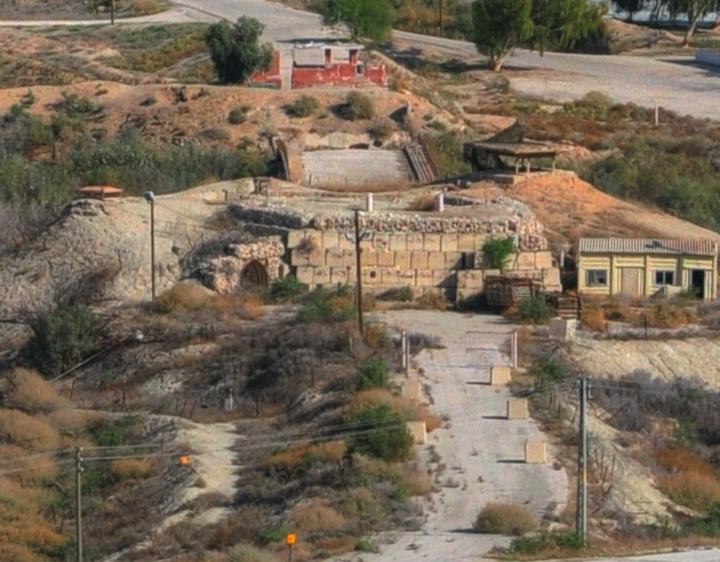 The modern Bailey (pre-fabricated modular) bridge was constructed in 1967 by the Jordanians, and was an active road for merchandise that was exported to Jordan and bi-directional travel between Israel and Jordan. The cargo trucks were initially painted blue.

The bridge is closed today and the traffic was transferred to Allenby bridge. 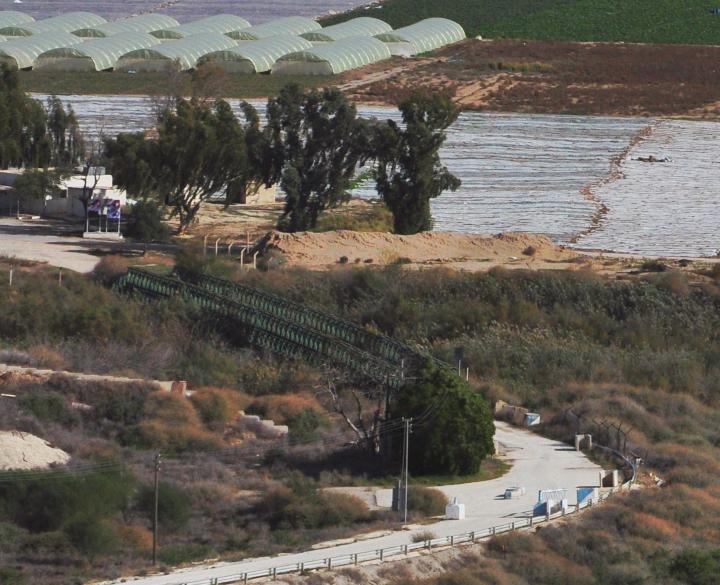 Tell Adam is identified as Biblical Adam. This is the place where the Israelites passed the Jordan river after returning from the exile in Egypt  (Joshua 3 16): “That the waters which came down from above stood and rose up upon an heap very far from the city Adam…”.  The city existed from the Bronze/Canaanite period until the Byzantine period.

After Solomon’s death, Egypt’s Shishak invaded Israel in 924 BC  (1 Kings 14: 25: “in the fifth year of King Rehoboam, Shishak king of Egypt attacked Jerusalem”). According to the Pharaoh’s hieroglyphic inscriptions, Adam is listed as one of the cities that he captured (#56 i-d-m). 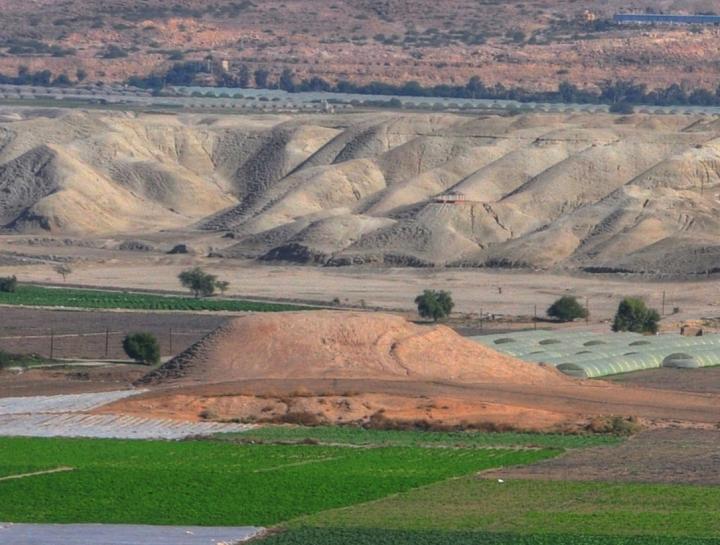 The area to the north of Adam is called, in the Bible, by the name of Sukkot (Hebrew for huts). There are several passages in the Bible. King Solomon casted Brass and Gold vessels for the temple, casting them in the clay that is located here (1 Kings 7 47): “In the plain of Jordan did the king cast them, in the clay ground between Succoth and Zarthan”. 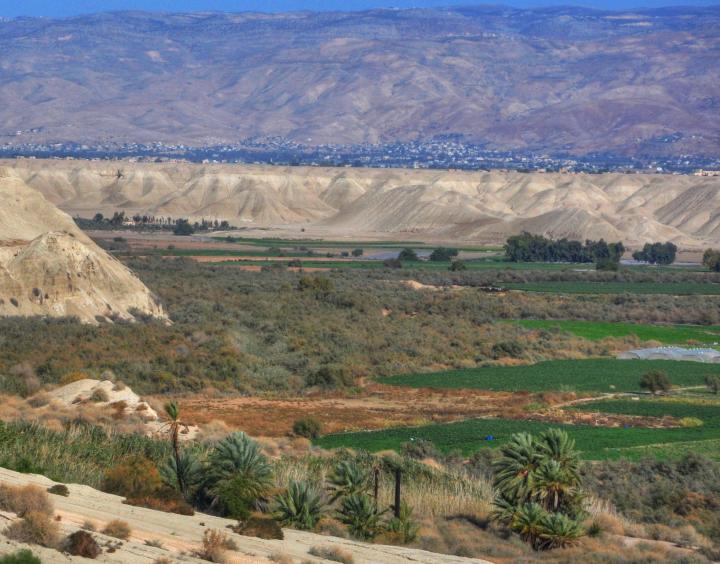 Around the delta of the Jordan river, are tall marlstone (Havar) hills on both sides of the valley. These were created by the fragmentation of the rocks by the sun and wind. They were actually dry beds of an ancient sea that once was located along the Jordan river. 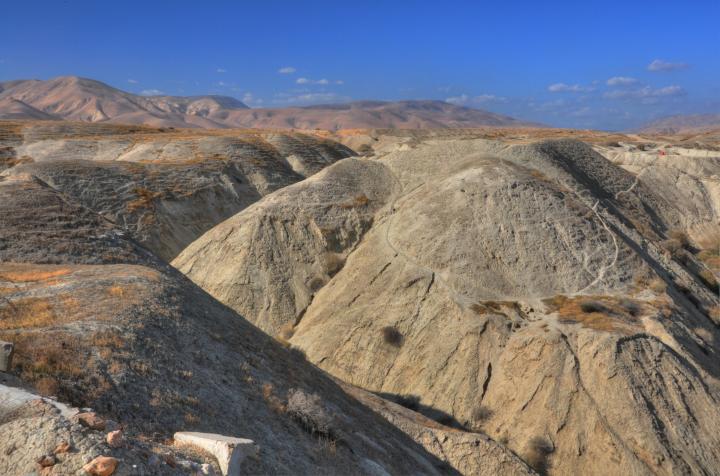 On the western side of the Adam bridge are the high mountains of the Jordan valley, seen below in the background. One hill stands out among these mountains – Sartaba.

According to the Biblical location of the Israelite crossing  (Joshua 3 16): “…  very far from the city Adam, that is beside Zaretan”.  Zeratan is identified as Sartaba, the fortress above the western hills. It is seen in the center of the photo below – a high pointed hill rising over the Tirzah valley pass. 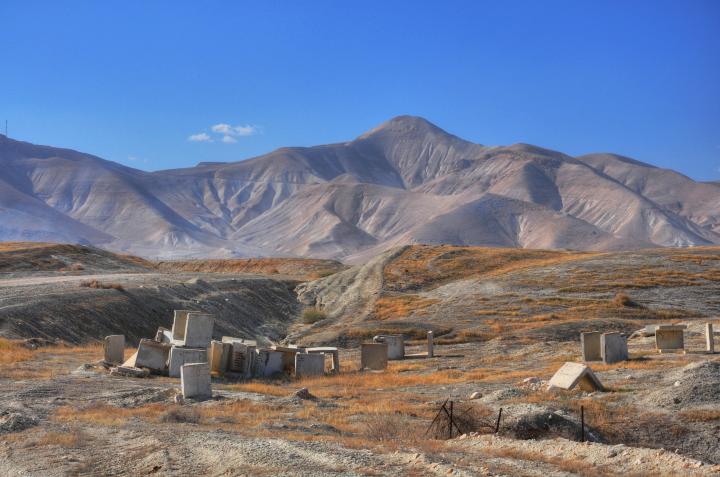 Entry to the Adam bridge requires prearranged permit with the Army, who dispatch a unit that accompanies the visitor. We thank the IDF and these great soldiers who protect the country and walked us through the area. 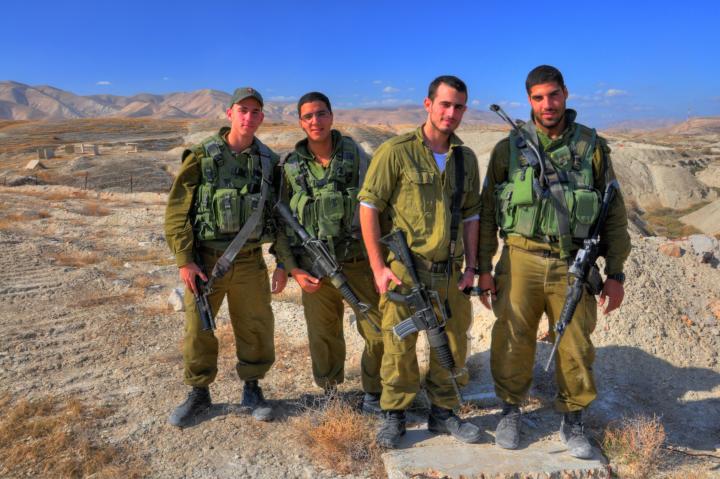 Description of the Israelite crossing of the Jordan near Adam:

” And it shall come to pass, as soon as the soles of the feet of the priests that bear the ark of the LORD, the LORD of all the earth, shall rest in the waters of Jordan, that the waters of Jordan shall be cut off from the waters that come down from above; and they shall stand upon an heap. And it came to pass, when the people removed from their tents, to pass over Jordan, and the priests bearing the ark of the covenant before the people; And as they that bare the ark were come unto Jordan, and the feet of the priests that bare the ark were dipped in the brim of the water, (for Jordan overfloweth all his banks all the time of harvest,) That the waters which came down from above stood and rose up upon an heap very far from the city Adam, that is beside Zaretan: and those that came down toward the sea of the plain, even the salt sea, failed, and were cut off: and the people passed over right against Jericho. And the priests that bare the ark of the covenant of the LORD stood firm on dry ground in the midst of Jordan, and all the Israelites passed over on dry ground, until all the people were passed clean over Jordan”.