The southern gate and walls of the Roman city  include towers, walls, drainage channel, bridge and a paved street.

The southern gate and walls of the Roman city  include twin round towers, walls, bridge, drainage channel and a paved plaza and street. It was recently reconstructed and included in the new Tiberias Archaeological park, which preserves and displays the reconstructed ruins of the first 1,000 years of the city.

Wars III 9 8: “Vespasian… went to the city; upon which the citizens opened to him their gates”

The site is located on the southern entrance of Tiberias, between the ancient cemetery and the hotels of Hamat Tiberias. It is part of the newly constructed archaeological park of Tiberias. A new parking lot is located near the south gate, north of the Holiday Inn hotel in Hammat-Tiberias. 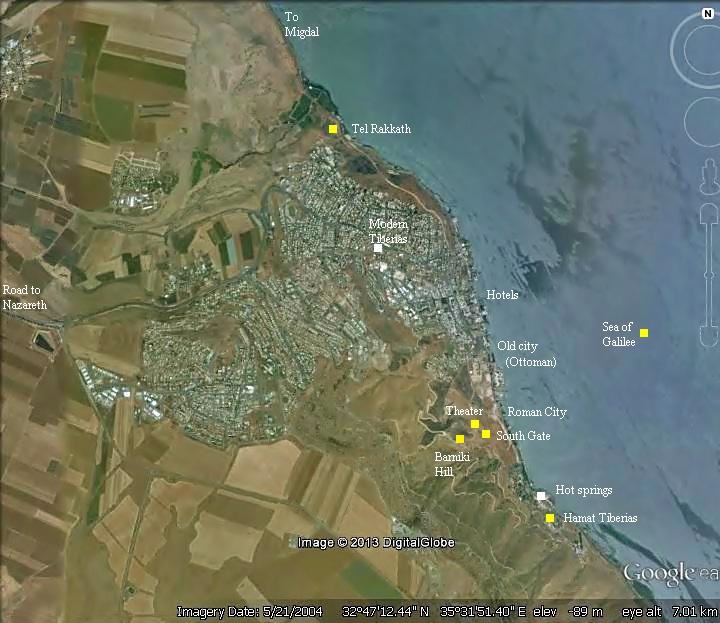 Tiberias was founded in 18 AD by Herod  Antipas, son of Herod the great and Jewish ruler of the Galilee  (4 BC-39 AD). He was appointed by Augustus Caesar as the ruler of Galilee and Peraea, the east bank of Jordan. Herod Antipas made the new city his capital, and named the city after the Roman emperor, Tiberius Caesar. Later (54AD) the emperor Claudius added his name to the city – Tiberias Claudiupolis.

The gate complex was constructed at this time, and protected the city from the south, with twin round towers on both sides. A drawing of the gate and the city behind it is seen here. 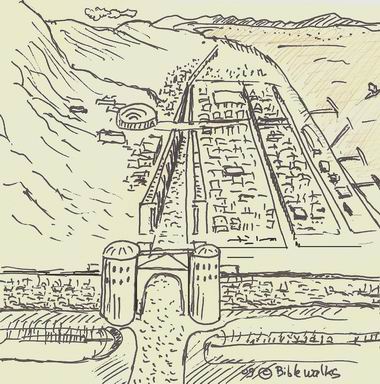 Behind the gate was the main colonnaded south-north road. The Theater was located on its west side, and the   baths and other public structures located nearby. The piers and lake are seen on the right side.

During the Jewish revolt against the Romans,  Josephus Flavius continued to fortify the city (66AD). However, when the Romans finally came on the following year, the city opened its gates to the Romans commanded by Vespasian. Thus, Tiberias was  spared destruction as other rebellious cities.

The Romans actually entered through this south gate into the city and had to open up the walls in order to let in the large Roman army.  This is described by the same Jewish General, Josephus Flavius, who became a Roman historian (Wars III 9 8): “Vespasian… went to the city; upon which the citizens opened to him their gates. But as the army was a great while in getting in at the gates, they were so narrow, Vespasian commanded the south wall to be broken down, and so made a broad passage for their entrance.”

These roads entered the city through the south gate.

A new Byzantine wall was constructed in the 6th-7th century, and included the Roman gate. Sections of these walls were excavated around the gate complex, but future archaeological seasons will reconstruct more of these walls and structures.

The gate was also in use during the Arab period.  The original Roman bridge was 16M long and 5M high. In 749 the great earthquake destroyed most of the structures in the area, including the bridge. It was repaired and replaced by a smaller bridge, 6.5M long, with a narrower channel.

The gate complex existed until the 11th century. However, after the arrival of the Crusaders the city was relocated to the north of the Roman city, and the area of the ancient city remained in ruins since then. The stream’s channel was blocked by sediment over the years, which also covered the gate complex.

The gate area was incorporated into the new archaeological “Berko” park in Tiberias. This grand project, launched in 2008, covers an area of 100 dunams (10 Hectares). The park reconstructs the old city of Tiberias from its establishment in the 1st century AD up to the Arab period (11th century).

As part of this project, the southern gate of the Roman city was magnificently preserved, including both of its towers and a Roman bridge and water channel. From the IAA article:

“The excavation of the gate was carried out by Professor Gideon Foerster in 1973-1974 as part of the trial excavations that were conducted in the area by the Department of Antiquities. In the excavation a wide gate was uncovered that consists of two round basalt-built towers that flank both sides of the opening, of which square decorated columns and a stone threshold have survived. Despite the fact that Tiberias city of walls in this period are mentioned in historical sources, their remains had not yet been discovered. In the Byzantine period, in the 6th-7th century CE, a wall was built around the city. The remains of this wall appear to have also been erected next to the towers of the Roman gate; thus archaeologists have concluded that the gate was also used in this period. While excavating the gates eastern tower a cluster of incendiary bombs was found. These were actually ceramic vessels which were used to defend the city. According to the archaeological evidence the gate continued to be used until the Fatimid period in the 11th century CE”.

A view from the east is seen below. The road and a modern bridge is located east of the roman gate, which is seen behind it. The mountain above Tiberias is seen in the background. 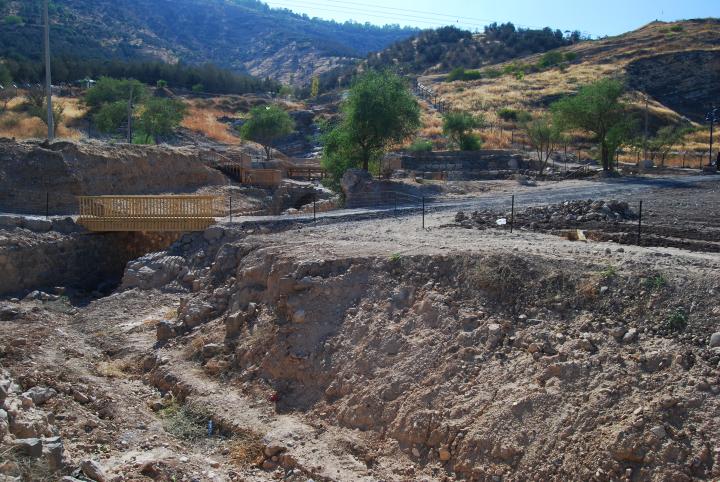 A closer view of the stone bridge is seen below. The water channel was constructed in order to allow the water from the hillside to flow under the main road of the city.

Although most of the year it is dry, sudden flashfloods flowing down the narrow stream caused severe damages. This required an engineering solution of a wall enforced drainage channel with a bridge.

The gate to the city is located on the right side of the bridge. 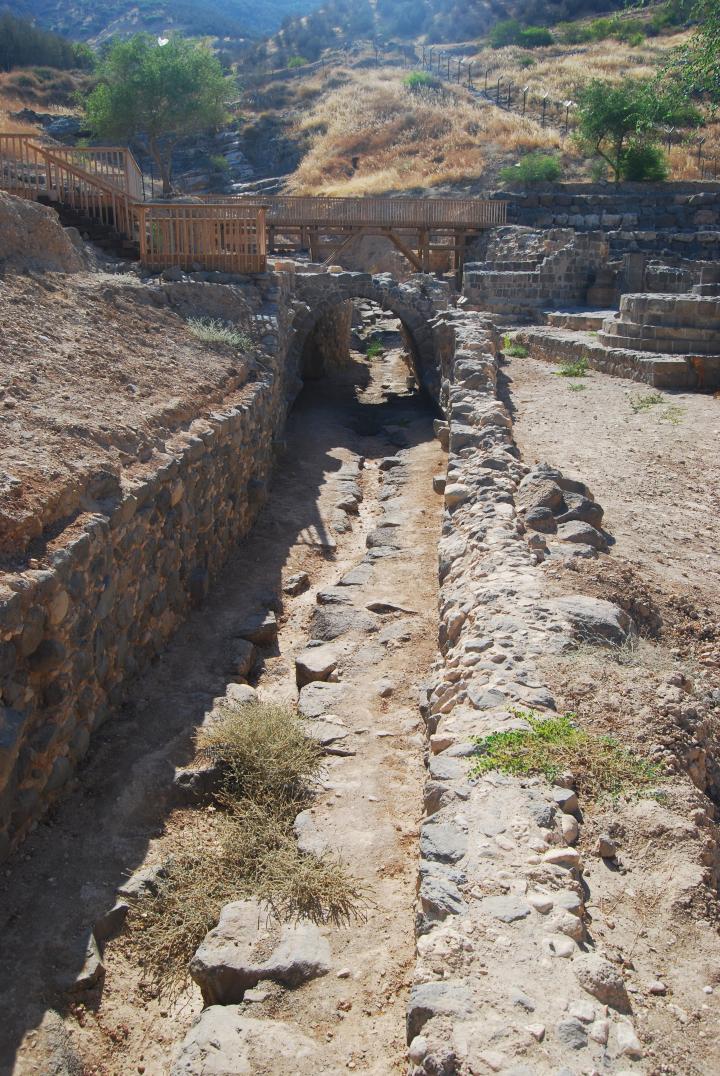 The bridge is located just outside of the city’s gate, seen below on the left side. The round basalt wall is part of the twin towers that protected the gate. 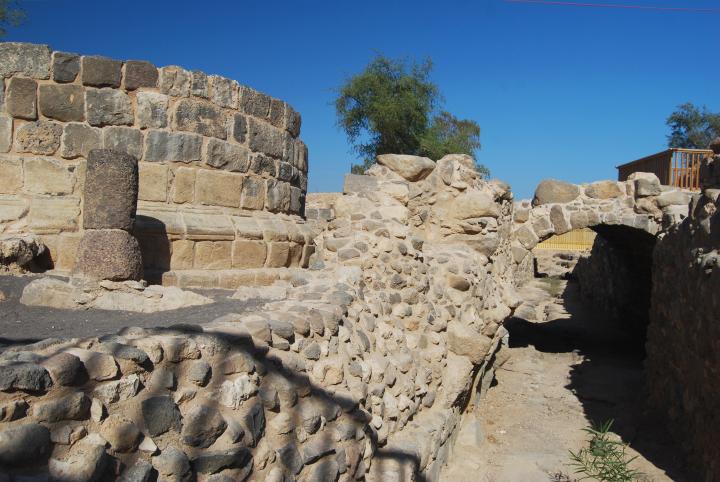 A closer view of the bridge is seen below. 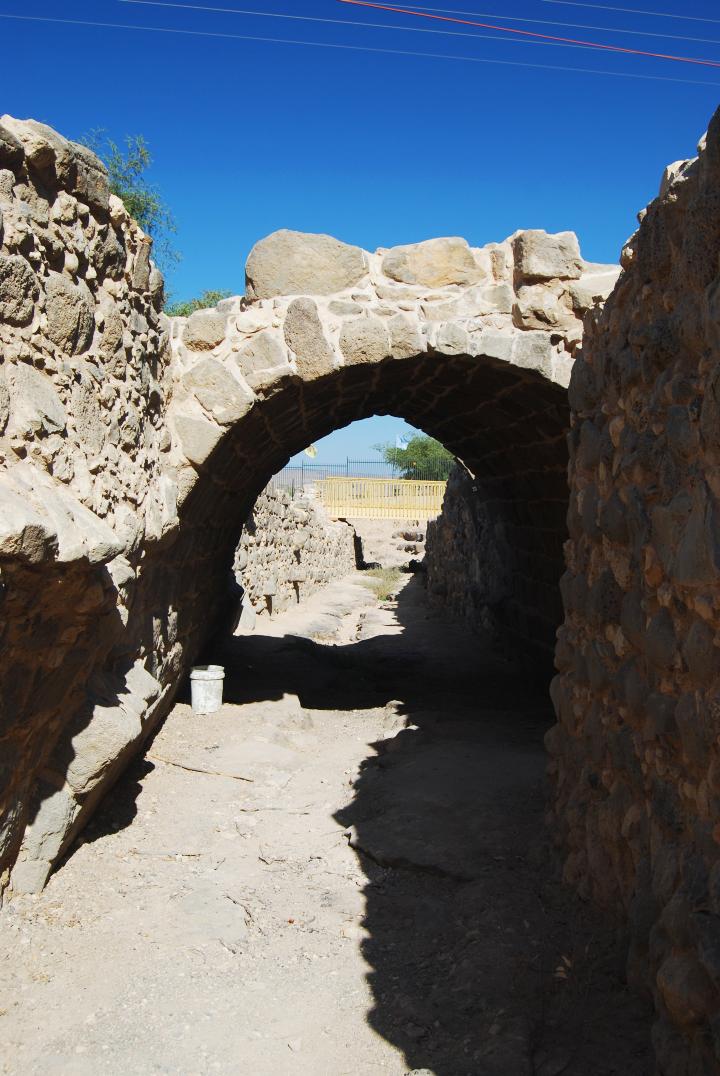 Three more bases of arches are located on the east side of the bridge, which were part of the vault on which the entrance plaza was constructed. 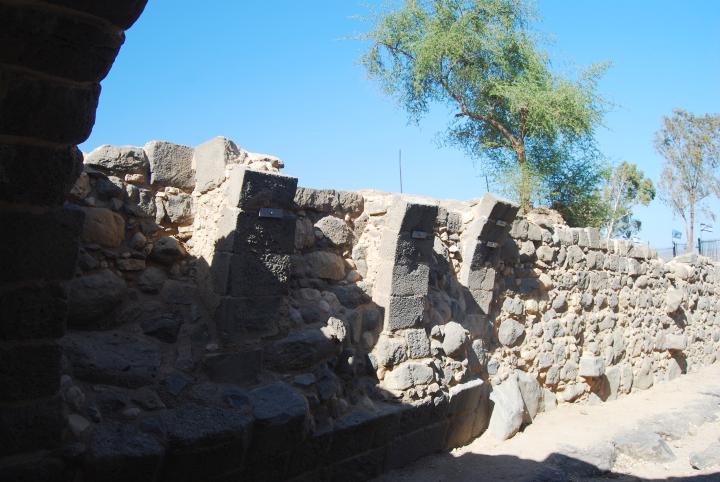 A view of the gate complex is seen below, with the bridge on the right side and the gate on the left side. Attached to the gate are the Byzantine city walls which incorporated the Roman gate.

The Sea of Galilee is seen in the background. 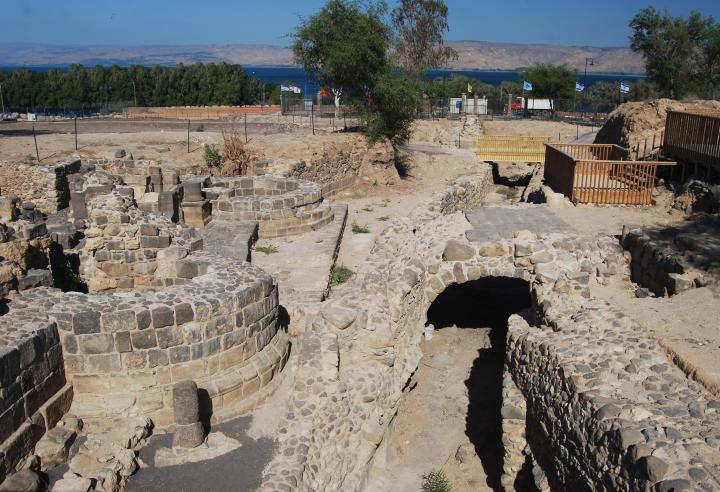 The entrance plaza in the south gate is seen below. The external side of the plaza was built over the vault of the drainage channel. 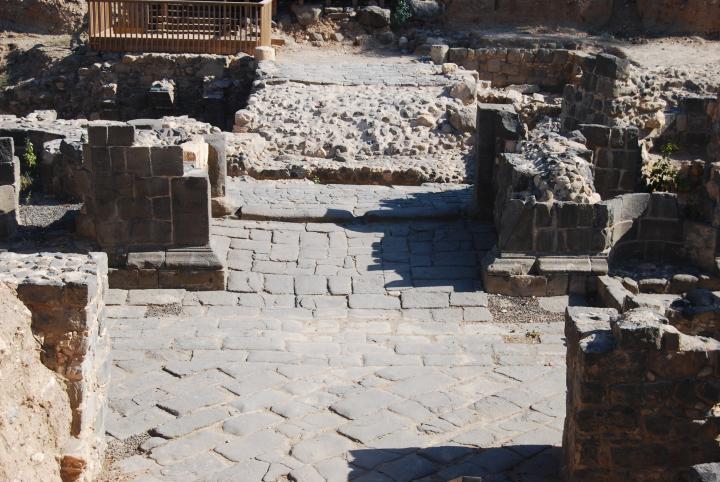 Another view of the gate is seen below. 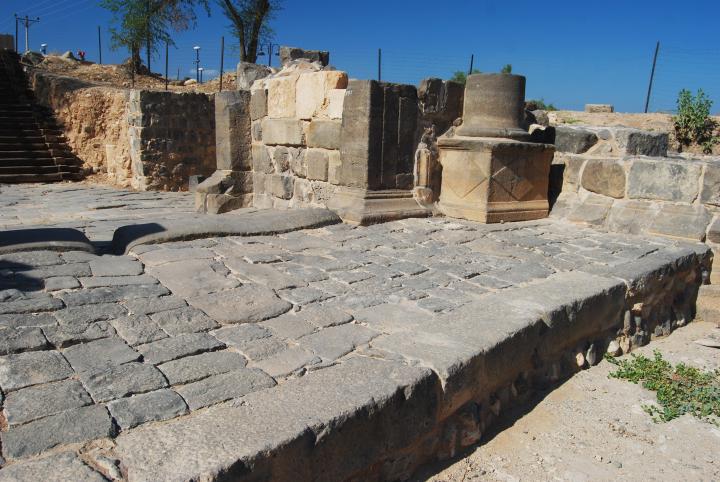 A decorated square base of a column is located on the side of the gate. 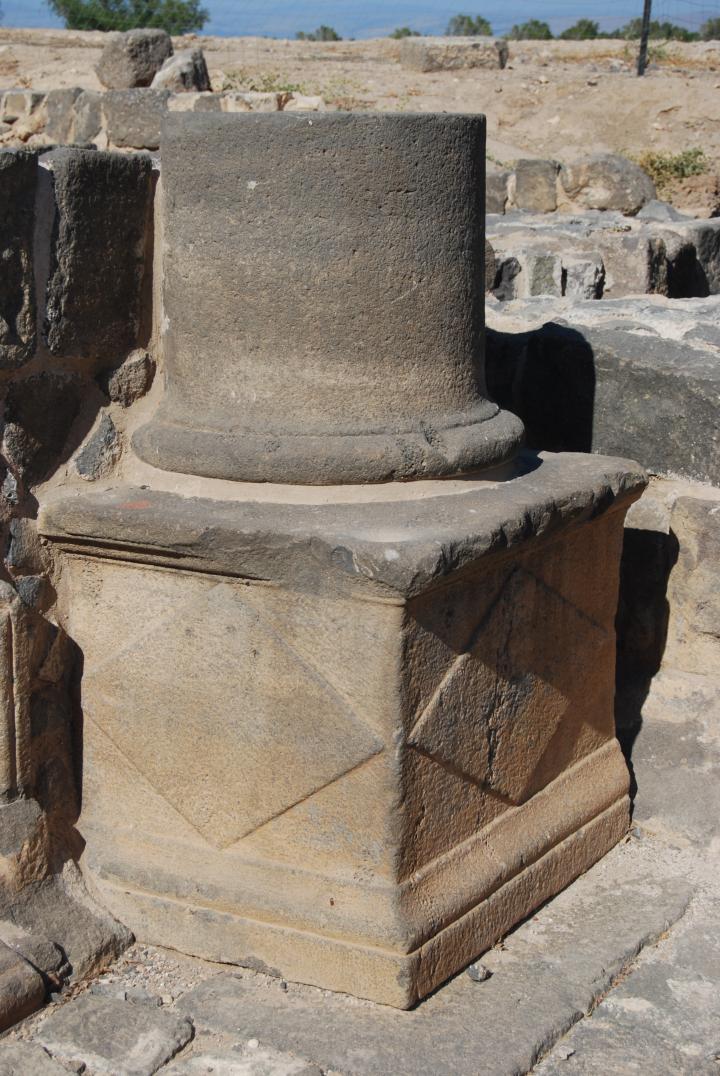 The picture below shows a view of the gate, towers and rooms – as seen from the north-west side. 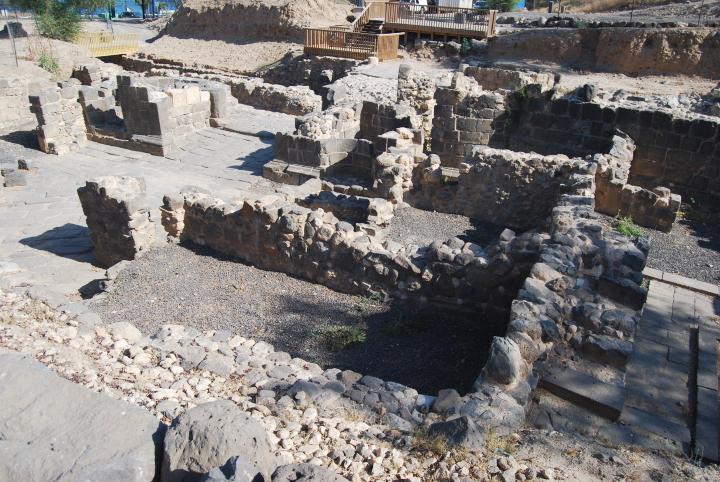 Two basalt round towers flank both sides of the gate, as seen below. 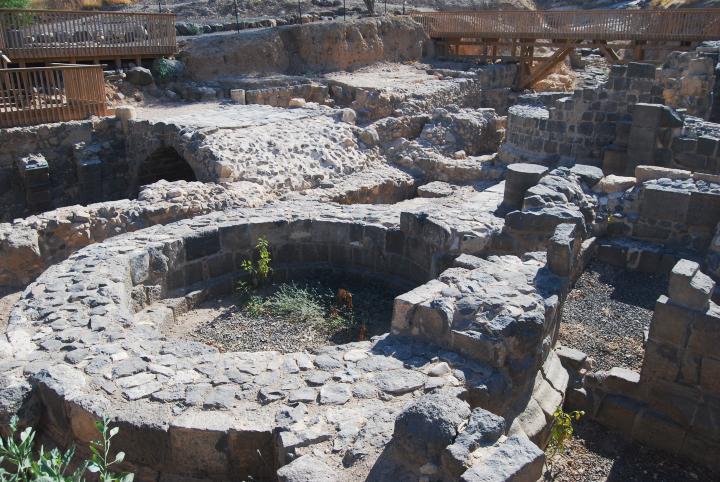 During the Great Revolt, the citizens of Tiberias opened the south gate and the Romans spared the city: